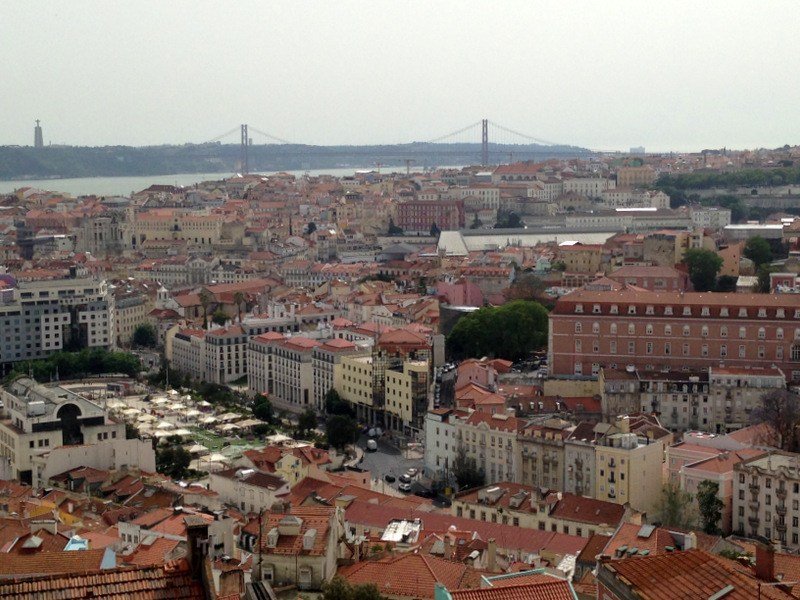 There are some stunning views of the city from Lisbon’s seven hills and Miradouros (viewpoints). The highest, and probably the best, is Miradouro da Senhora do Monte which looks over layers of terracotta rooftops to the castle and out towards Lisbon’s Tagus River. The miradouros were one of my favourite things to do in Lisbon.

You can see the neo Gothic Elevador de Santa Justa, Christ the King Statue over the water and the 25 de Abril Bridge which looks remarkably like San Francisco’s Golden Gate Bridge.

If you don’t fancy the climb then tram 28 stops on Rua da Graça nearby.

Lisbon street art is epic and it’s all over the city.  In fact Lisbon is so into its street art that there’s a new workshop teaching the over 65s about it and at the same time aiming to break down ageist views and stereotypes. Imagine – a gang of aerosol toting graffiti grannies tagging their way around town! Here are some of the colourful pieces we discovered on Lisbon’s buildings.

The buildings pictured have all been bought and are awaiting renovation and will become new hotels. In the meantime the street art is much more appealing than crumbling fascia and bricked up windows. Read about more Lisbon street art. 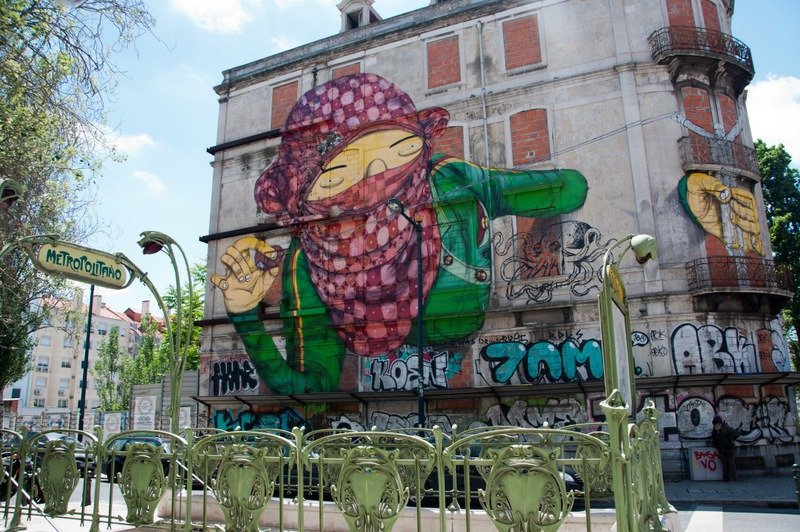 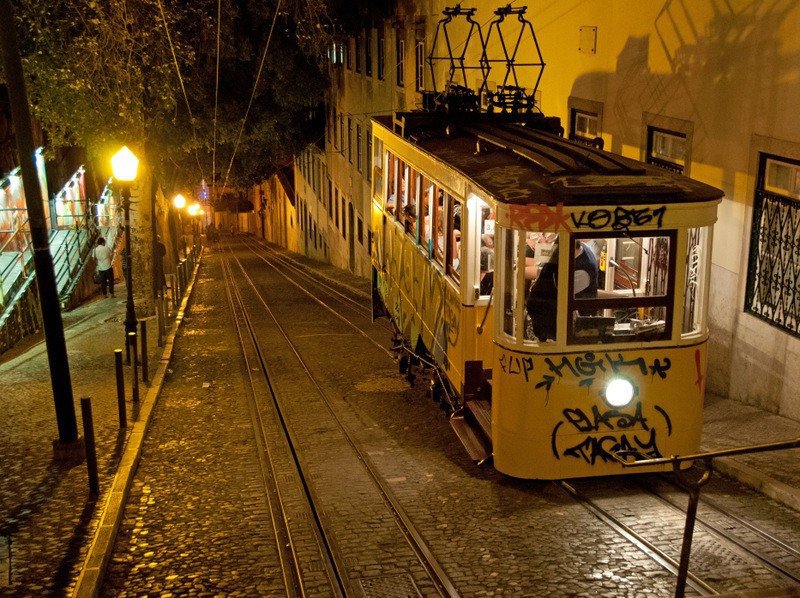 Lisbon’s pavements are beautifully decorated with elaborate mosaic and cobblestone designs and patterns. Small blocks of limestone are placed by hand to create beautiful monochrome patterned walkways or to show house numbers.

The first ever design was ‘the wide sea’ known as the wave design created in Rossio Square in 1849.  Other areas of the city picked up on the trend and it spread throughout Lisbon. 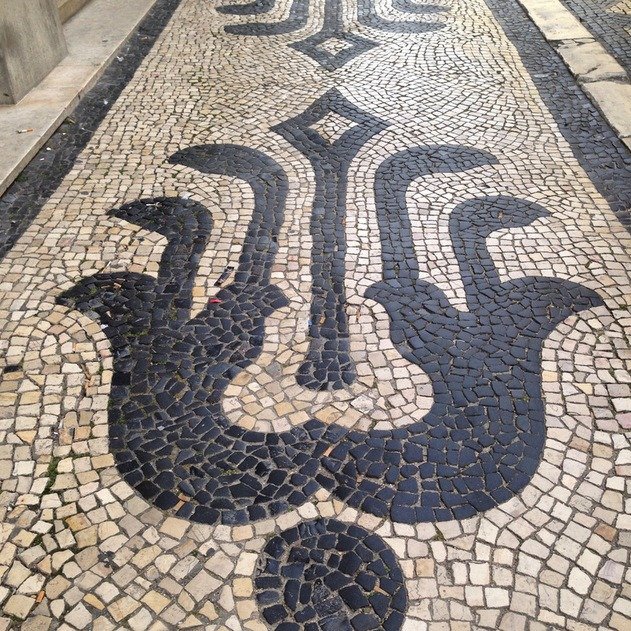 Some of the pavements are now over 160 years old and they’ve been very well trodden. In places there are large holes and dips where the cobbles have come away completely.  Some pavements are so worn that they’re actually very shiny and slippery – especially when you’re walking downhill.  If you’re visiting Lisbon take some comfy rubber-soled shoes with a bit of grip.

You can’t visit Lisbon without trying the Pastéis de nata and if I’m honest these were a really big pull for me! Buttery pastry cups in crisp, flaky layers with a slightly salty edge are filled with a creamy egg custard and sprinkled with cinnamon and sugar. Heavenly or what! Our Lisbon hotel had tiny versions next to the croissants at breakfast. Don’t judge me! 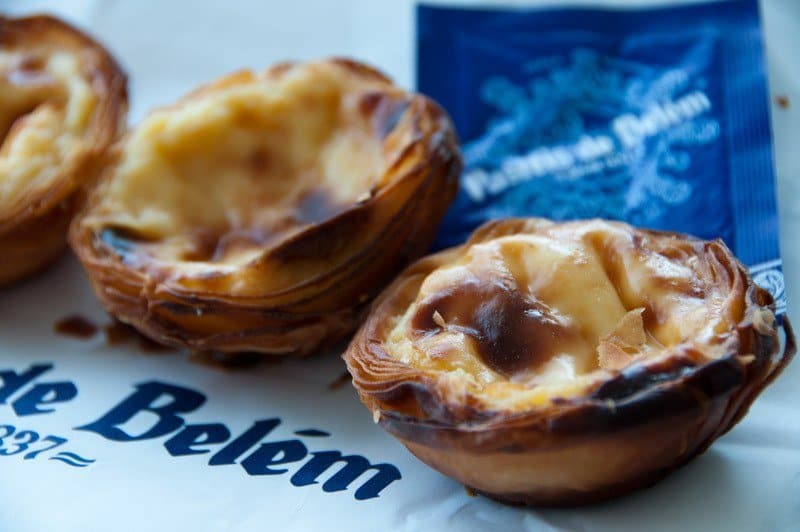 The little cups of creamy lusciousness were first created before the 18th century by Catholic monks in the Jerónimos Monastery in nearby Belém. The monks ran a laundry and used egg-whites for starching.To stop the yolks from going to waste they made pastries and custard tarts.

The monks sold the pastries at a nearby sugar refinery and in 1834 when monastery shut down the refinery bought the recipe. In 1837 they opened the Fábrica de Pastéis de Belém and you can still buy Pastéis de nata at their shop today.

If you want the real thing made from the authentic recipe in the original town of Belém be prepared to wait and queue, and queue a little bit more. There were long lines at the bakery’s shop and for the sit-down service – this was at 6pm so what it’s like a peak times I can’t imagine.  But they were worth the wait!

The Monument to the Discoveries 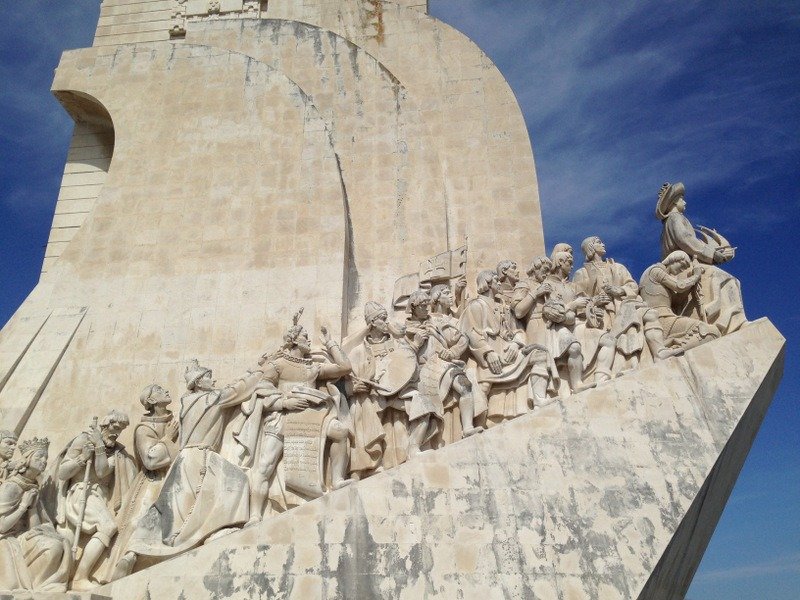 Monument to the Discoveries

While you’re in Belém you can also check out the Monument to the Discoveries erected in 1960 on the site where Portugal’s famous explorers departed on their voyages of discovery. The monument represents a ship led by Prince Henry the Navigator with figures from the Age of Discovery behind him.  Torre de Belém and Jerónimos Monastery are nearby.

How to get to Belem from Lisbon

There are a few ways to get from Lisbon to Belem. You can take the tram No 15 from Praça do Comércio (main square) which takes 15 minutes. Bus no. 28 or 43 departs from Praça da Figueira, again taking 15 minutes.

You can take the train, which we did, from the station of Cais do Sodré which is about a 10 minute walk along the water-front from Praça do Comércio. The journey takes around 10 minutes. 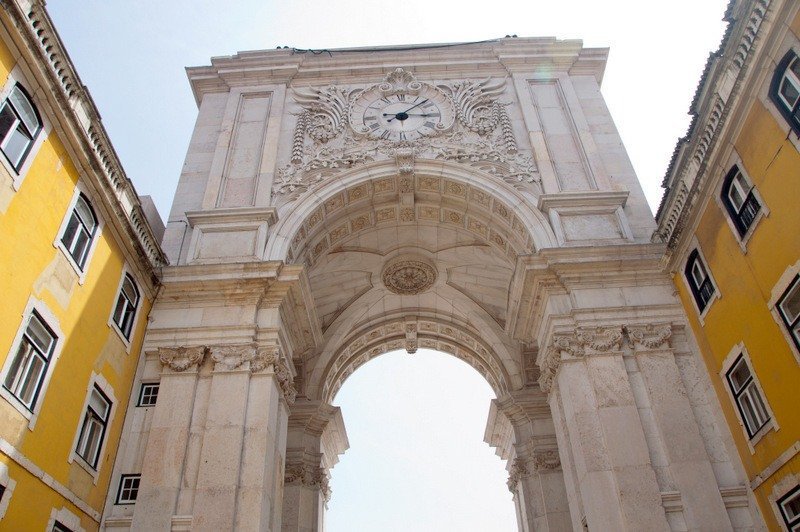 Rua Augusta Arch or triumphal arch was designed in 1775 as a gateway to the city and was renovated in 2013 – there’s an elevator inside to allow visits to the terrace which has beautiful views over Praça do Comércio, the River Tagus and downtown Lisbon. 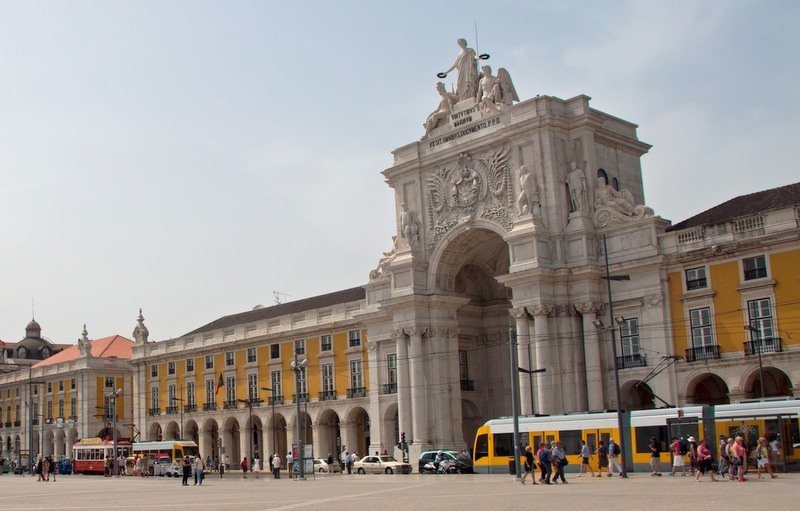 Lisbon’s Praça do Comércio square faces the river and was originally used to welcome those arriving in the city by boat. This was the first time I’d seen the square as during my last visit in 2010 it was undergoing renovation.  The original square named “Terreiro do Paço” was home to the royal palace.

Nowadays, the porticoes and colonnades house cafes, bars and restaurants and we had a lovely lunch at Populi Restaurant watching the world go by. Another good restaurant was U Chiado in the Chiado district of town where I had a wonderful meal of lamb chops and a fabulous risotto. The service was excellent too and prices compared well to the UK. 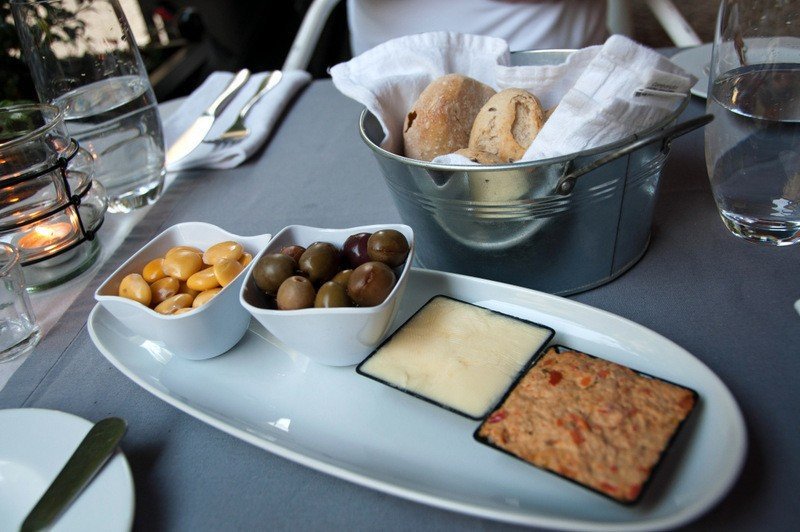 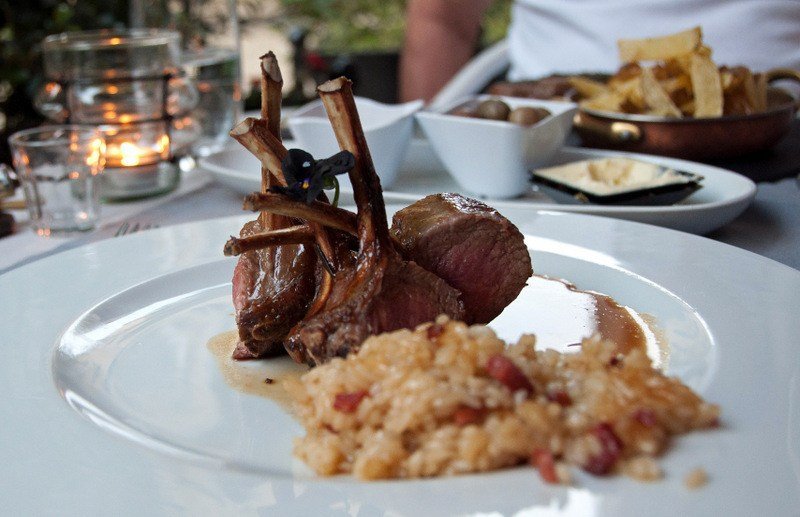 The Best Gin and Tonic in Lisbon

It was Gin and Tonic time on our first evening in the city and we were in the Chiado area of the city when Mr Jones spotted a little restaurant with two empty bar stools at the bar. This turned out to be called Vintage Gourmet, a small restaurant, shop and bar which stocks over 120 different types of gin.

We chatted to Nuno Monteiro the owner who is passionate about Gin and he recommended a brand new tinto (red) gin which had been released just a month before. The Tinto Red Premium made one of the most unusual and best gin and tonics that I’ve had in a long time. The sign on the wall as we entered said ‘always believe something wonderful is about to happen’ – couldn’t have been truer! 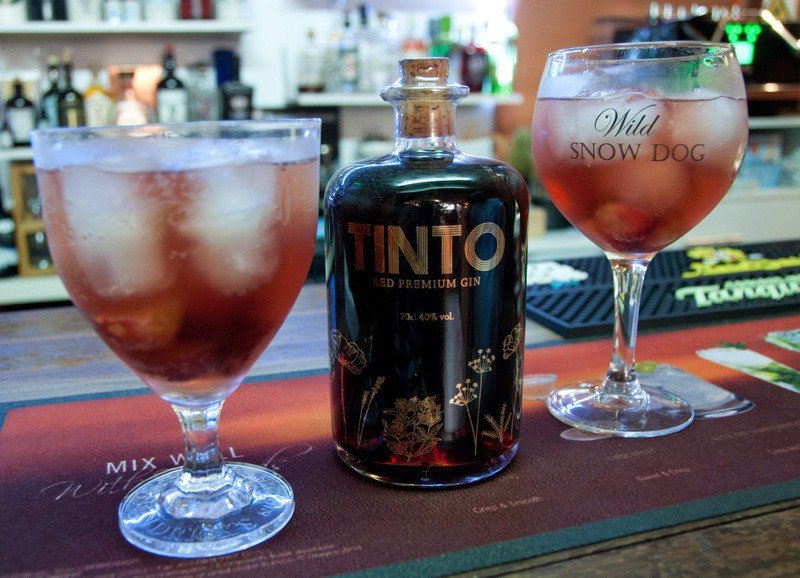 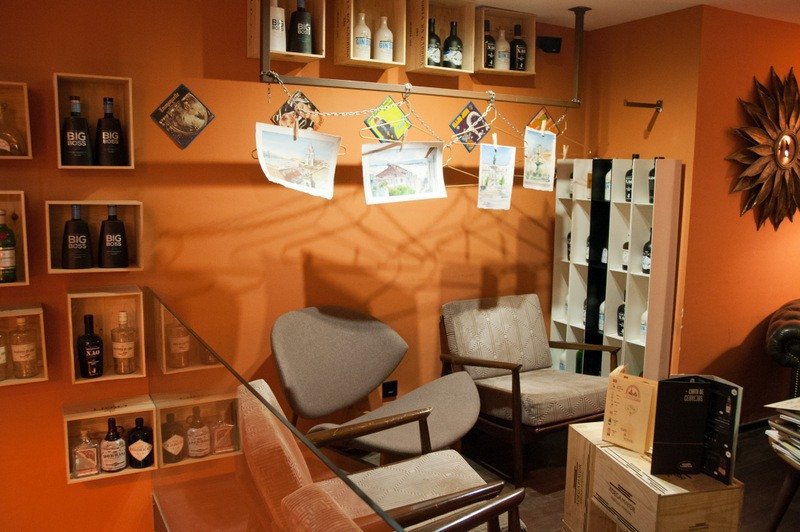 Getting around in Lisbon

Lisbon is spread out over it’s seven hills and it’s going to take a lot of hill walking to see it all. Fortunately, there’s an excellent public transport system – Carris.

A single ticket is €1.50 and is valid for one hour but you will also need to purchase a re-chargeable card Viva Viagem for €0.50. You can top this up and use it throughout your visit. It’s €6.30 for a 24-hour pass. After our visit to Lisbon we took the train to Porto.

Where to Stay in Lisbon

We stayed at the 5* EPIC SANA Lisboa Hotel in Lisbon in the upscale area of Amoreiras. This modern newly built hotel has an indoor pool, rooftop infinity pool with views over the city and a buffet breakfast (which serves thos gorgeous Pasteis de Nata custard tarts).

It’s located about a 25 minute walk from the centre of the city and just a few minute’s walk from Marquês de Pombal metro station which is 700 metres away. Check rates and availability for the EPIC SANA. 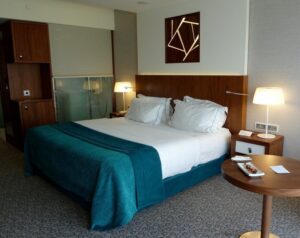 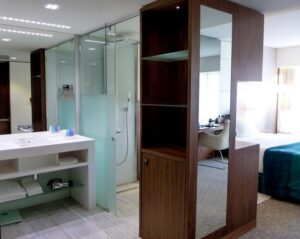 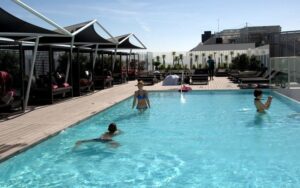 So that’s my list of things to see and do in Lisbon. The city makes a great weekend break and is also a good starting point for exploring more of Portugal or as a base for taking these three amazing day trips. Have you been to Lisbon? Did you love it? Share your views on the city in the comments below. 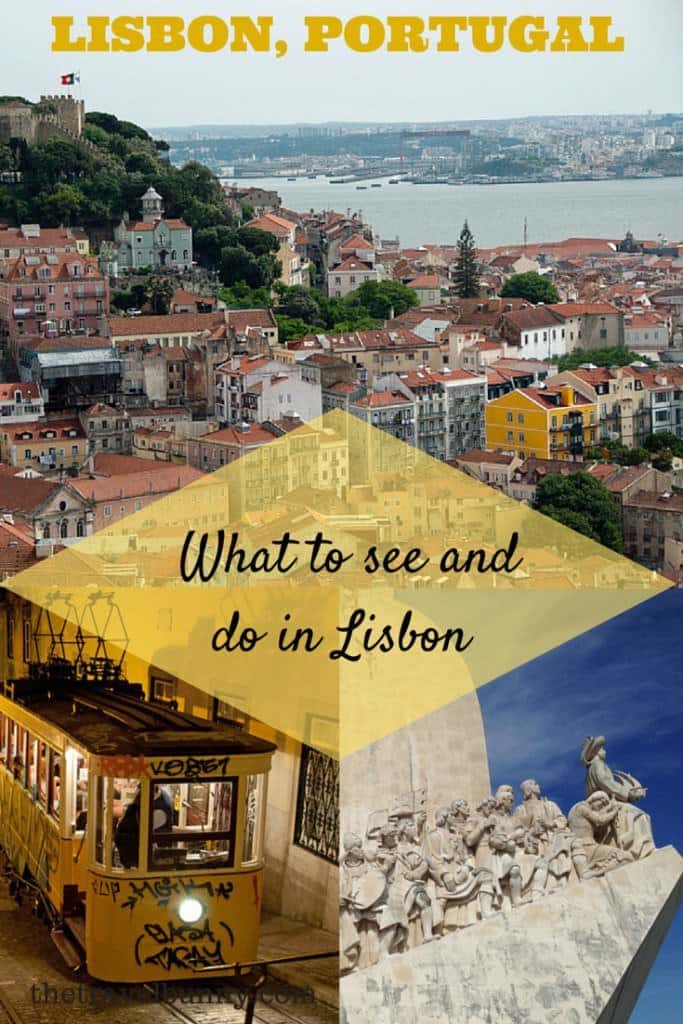 I lived in Lisbon !968/69. Then Lisbon`s nightlife was pretty riproaring , food and drink were very cheap.A retaurant opposite the cas do sodre station served a 3 course meam with a half bottle of wine 2 shillings an sixpence [ work that out in decimal uk coinage. When the American 5th fleet visited (that was a different Story),oh well.

Thanks for sharing your memories, sounds like you had some fun times in Lisbon. Have you been back since then?

Loved your Lisbon post and pictures! The city looks so charming! Heading there this weekend, cant wait to see it for myself! Thanks for sharing useful tips ;-)

Hope you have a great time - Lisbon get loads of sunshine to hope you're lucky with the weather!

We will be coming in on a cruise boat in Septmeber,what are thebest recommendations?

Hi Amanda, are you looking for restaurants or what to see and do?

Hello travel bunny, First of all, the name is very intriguing and cool. You have written about places that are rarely heard of and are beautiful. You have unmasked the beauty of Lisbon and the street art and the mosaic art of this place is very unique. The blog is definitely a window to these places.

Hi Sanchit, hope you find some inspiration to visit new places - and thanks for dropping by :)

As you I also didn't have this thing for Lisbon... I have been there a few times, but maybe I didnt like it because I never stayed long. I was there only to spend the day, as every time I fly to Brazil I have long connecting flight for about 10 hours there. So every time I enjoy to go out the airport and explore the city a little bit. I think I should stay a bit longer one day to really get to know the city better. The pasteis de nata are amazing :D

It's odd but ever since I've mentioned my doubts about Lisbon a lot of people have said they feel the same way but, maybe like you, I didn't give it a fair chance. Those custard tarts - gorgeous!