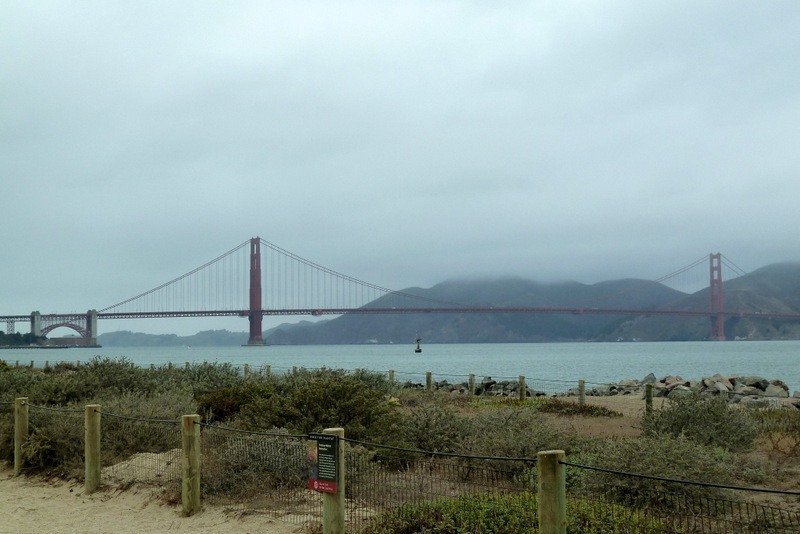 Completed in 1937, the iconic suspension bridge took four years to build and weighs in at 887,000 tons. The roadway sits 225 ft above the water and it can sway up to 27 ft in bad weather. It was cold, grey and windy the day we biked the Golden Gate Bridge and that sway was playing on my mind…

San Francisco was the first stop on our South West US road trip, but we didn’t actually set eyes on ‘that bridge’ until our third day in the city. Even from the forty sixth floor of our San Francisco hotel the iconic bridge was shrouded in swathes of swirling Pacific mist. San Francisco is well-known for the fog. But that didn’t matter because on our final day in the city we were set to ‘bike the bridge’ and see it up close and personal.

There are a few San Francisco bike tours to choose from but we booked with Blazing Saddles. After arriving at their Hyde Street depot, we watched a short introductory film and got sized up for bikes and cycle helmets. For someone who’s only ridden a bike about three times in the last ten years, I was a tad nervous. Actually, very nervous. 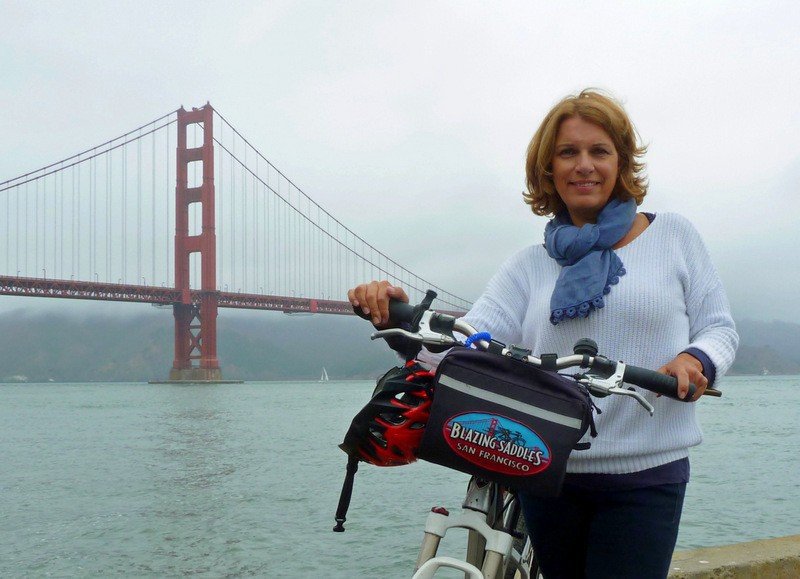 We were to meet our tour guide, Ken, and the rest of our group at The Aquatic Park near the cable car turnaround. There were around 18 of us altogether. Although it was a chilly, grey day, hanging around waiting for the rest of our group wasn’t a bad thing because we got to meet Freddie Flintoff and Jamie Redknapp! They were filming on the beach for ‘A League of their Own’. They were happy to pose for pics with us but, sadly, we didn’t have time to remove our geeky cycle helmets. 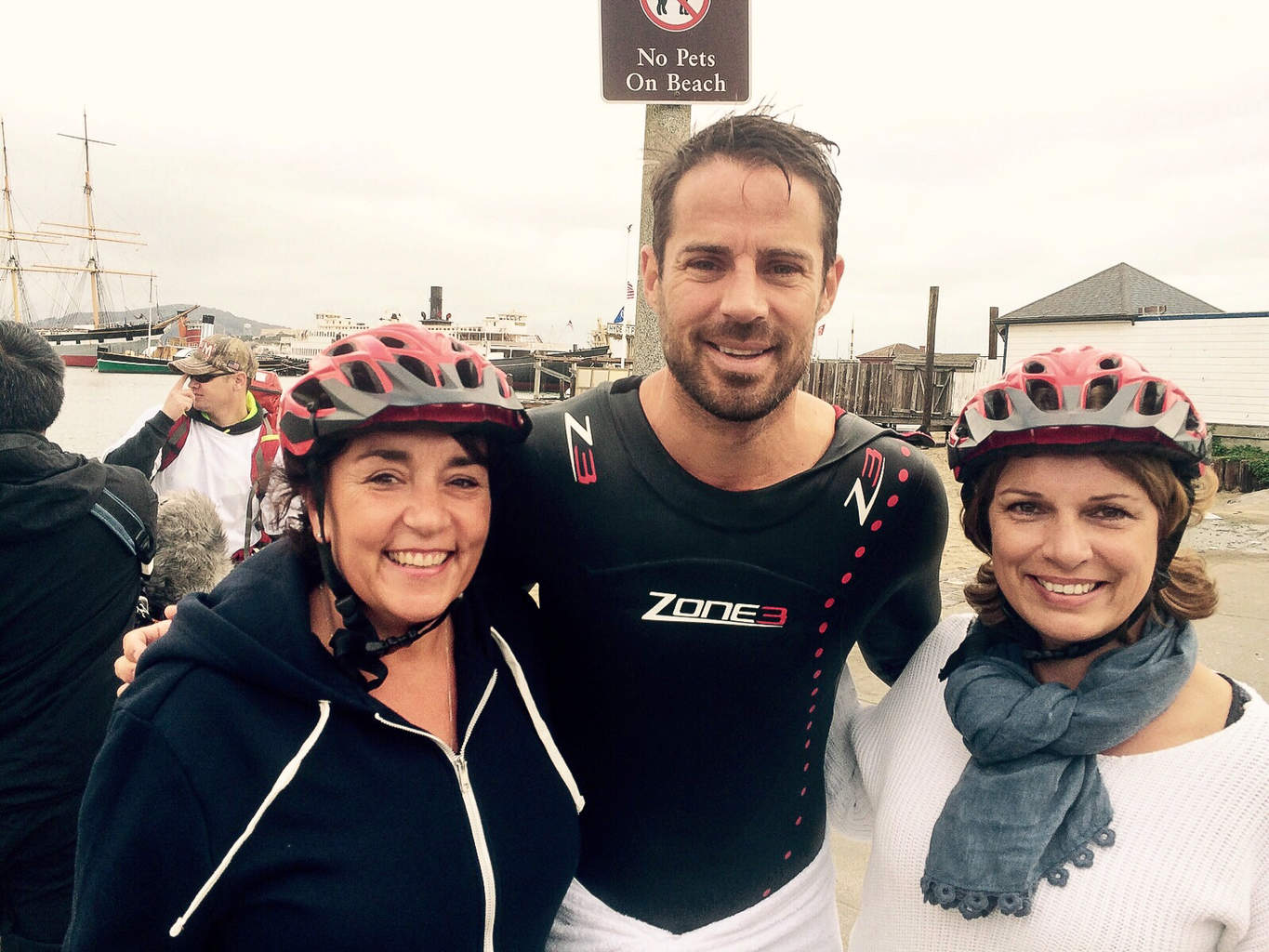 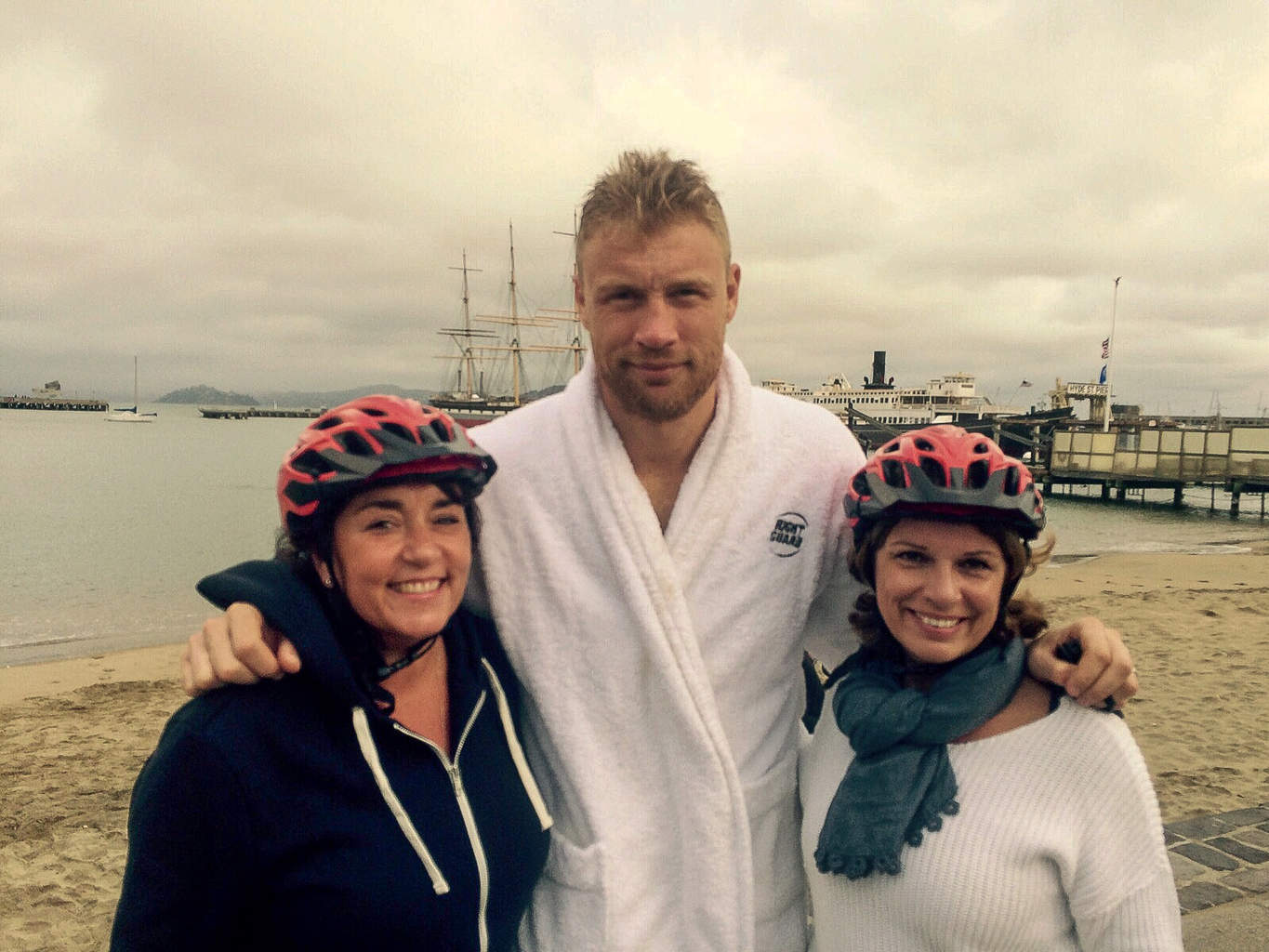 Read more: Best things to see and do in San Francisco

When everyone had arrived, we set off and after a few wobbles and a steep hill I got going and managed to enjoy the views as we cruised the footpaths alongside the bay. I even started to warm up a bit! We passed Fort Mason, a former US army post, and the marina before stopping for a while at Crissy Field, a former airfield, for photos. This is where you’ll get the best views of the full length of the bridge.

On Golden Gate Promenade we stopped at the Warming Hut where you can buy drinks, sandwiches and pastries. At each stop Ken would wait until all the group were together and told us fascinating facts about San Francisco and the bridge and answered any questions we had. We got some of the best views of the Golden Gate Bridge en route to the bridge itself. 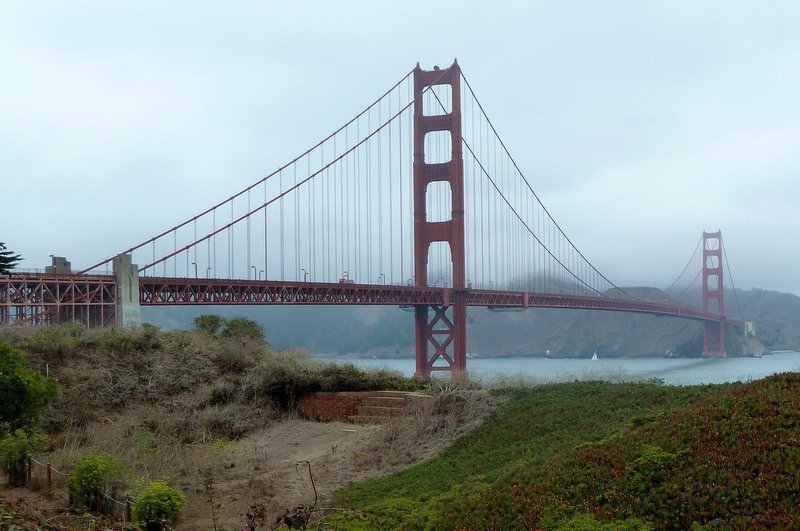 At The Warming Hut the bridge loomed over us moody and brooding – even the colour seemed darker than usual. The bridge is painted in ‘International Orange’ a colour similar to the red lead coating that the steel was covered in when it arrived from the foundry. Consulting architect, Morrow, thought the colour blended well with the sky, ocean and landscape and would work well with the changing seasons. And so it stuck. Painting the Golden Gate Bridge is a continuous operation.

The bridge is dauntingly huge up close. The twin pylons, which anchor it, are a neck-craning 746 feet high with around 600,000 rivets in each. The suspended roadway is supported by two cables, each one more than 7,000 feet long and containing 80,000 miles of wire. The cables stretch over the towers and are anchored in concrete on the shore. That was reassuring to hear because there was quite a headwind that day!

After a pretty steep, winding hill we arrived panting at the top for our first view at bridge level. Stretching out along the length of the bridge were the towering pylons, suspension cables and touches of art deco along the way. The time had come to bike the bridge so it was best foot forward and into the foray of oncoming cyclists and pedestrians. I’ll admit it got a bit hairy at times, those cycle lanes are skinny. 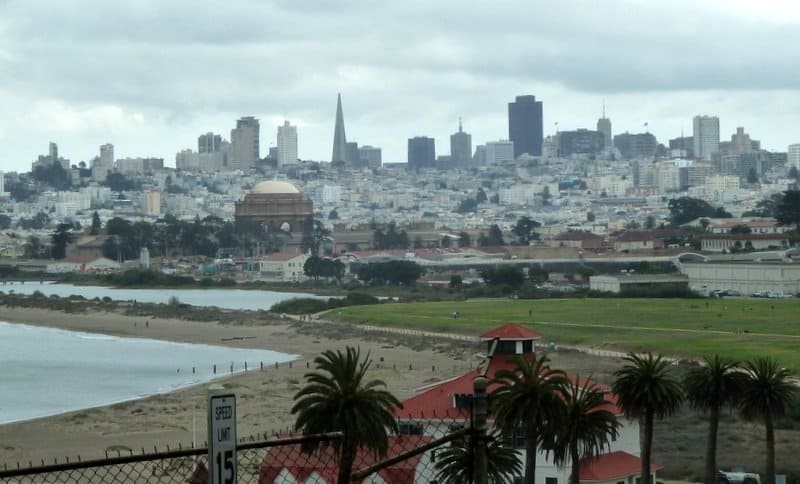 We stopped part-way across the bridge for views of the bay and city. The sight of the city through the mist was fabulous but my gaze was constantly drawn upwards to the massive steel pylons and the chunky suspension cables. The Golden Gate Bridge is a beauty to look at but the real wonder for me is in how this amazing bridge was actually constructed.

It didn’t seem long before we’d cycled the 1.7 miles and had arrived at the north side of the bridge with a whoop, a high five and a massive sense of relief on my part!  There’s a vista point here where the sidewalk widens looking across the bay to the city – a great spot for photos.

The Ferry from Sausalito to San Francisco

To get back to the city we took the ferry from Sausalito to Fisherman’s Wharf and Pier 41. The ride to the ferry terminal was fabulously all downhill! Bikes safely stowed on board we had a hot coffee and warmed up as we sailed across the bay past Alcatraz to pier 41. It was just a five-minute ride back to the bike depot and as we arrived we were cheered in by the Blazing Saddle staff. It was a lovely welcome back!

It was impossible to take any photos while we were biking across the Golden Gate Bridge as we were on the move most of the time. If I’d tried I’d have probably caused an accident so I don’t have many shots of the actual day we biked the bridge. I’ve visited San Francisco before in the sunshine and did the Golden Gate Bridge walk. These are some shots taken then. Doesn’t it look totally different in the sunshine with a blue-sky backdrop. 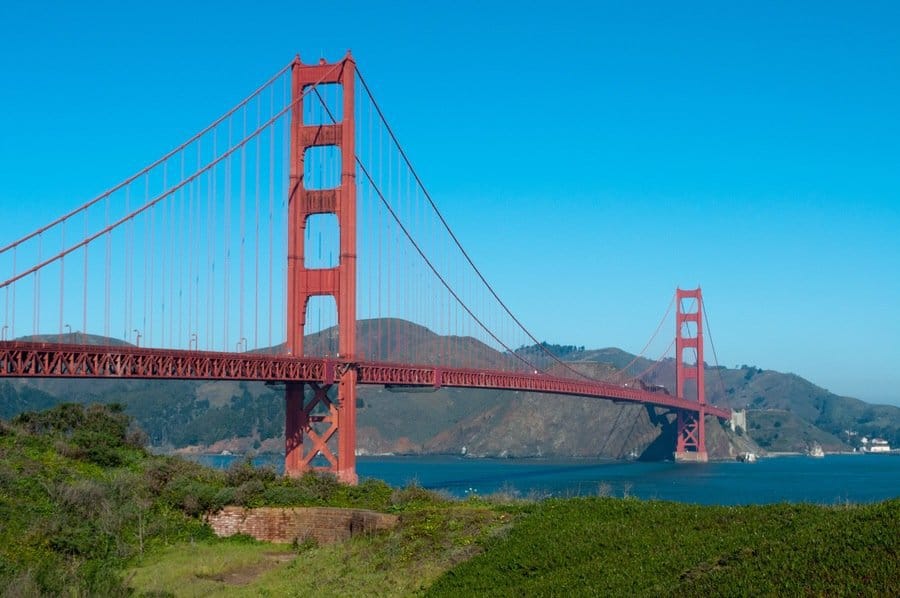 If you don’t want to cycle you can walk across Golden Gate Bridge. The bridge is open to pedestrians and cyclists 24 hours daily. There are two sidewalks on the bridge, east and west. At weekends or after 3pm on a weekday bikes travel on the west side which is for bikes only. At all other times you’ll need to be on the east side which is for both bikes and pedestrians. You’ll get better views on the east side as it’s facing Alcatraz and the city but the path is shared with pedestrians and it’s not that wide.  You can check times and which lane to use here.

You don’t need to join a tour to bike the bridge with Blazing Saddles. There is a 24-hour bike hire option so that you can explore the bridge and the city at your own pace. Maps, directions, various trails and ferry times are provided and the route to Sausalito is straightforward.

Blazing Saddles hire doesn’t include ferry tickets because the ferry is operated by another company. You can buy your ferry ticket when you pay for your bike hire which saves you queuing at the ferry terminal. Get off at Pier 41 and it’s just a short ride back to drop off your bike.

Many thanks to Blazing Saddles who very kindly gave us discounted rates for our Bike the Bridge tour. They were helpful and friendly and the bikes were in excellent condition.

Have you been to San Francisco? Did you bike across Golden Gate Bridge? Or any other bridge in any other city? 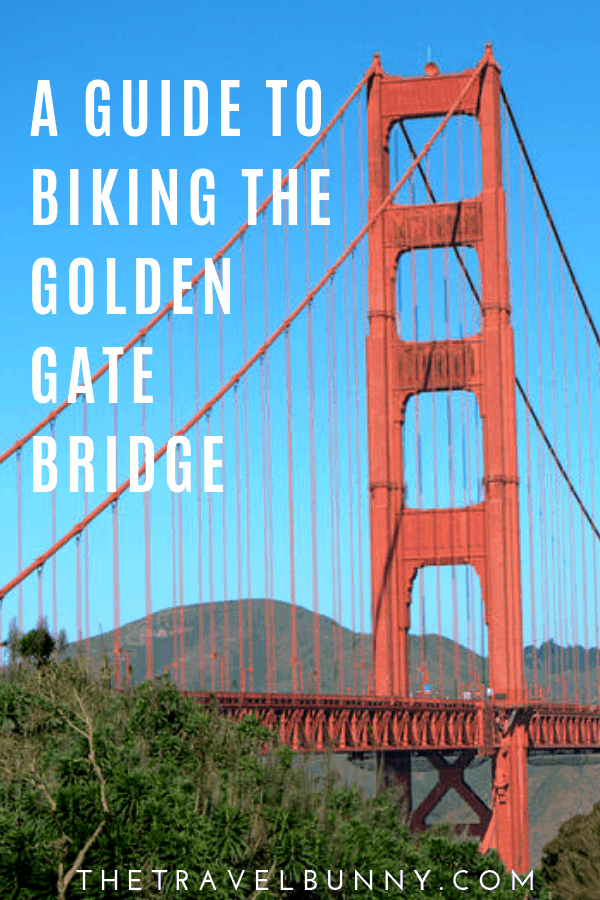 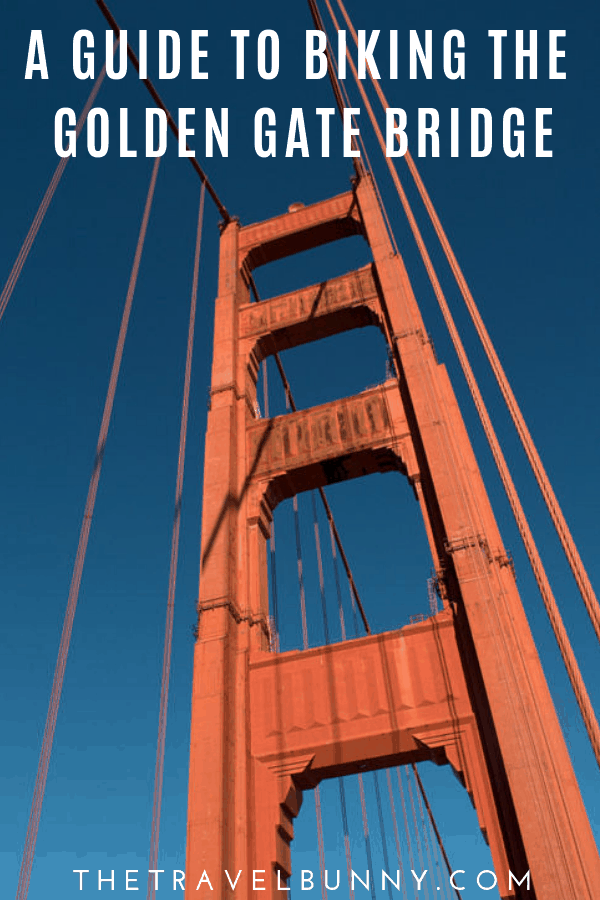 Some of the posts on this site contain affiliate links. If you buy an item after clicking on one of these links I may receive a small commission at no extra cost to you which is very much appreciated.

What a fantastic way to see this magnificent structure! I too would probably be a little weary of travelling on a bike but I bet once you get into it, it's pretty fun! I can't decide whether I like the look of the bridge in the sun or fog more, both are breathtaking!

If you're ever in San Francisco, whatever the weather, you have to see the bridge close up - it's fabulous!

This takes me back, love San Francisco, such a cool city!

It's posts like this that make me wish I could ride a bike but sadly it's a skill I never actually learnt but well done on doing it yourself when you'd only done a handful of bike rides in the last few years yourself! And what a location to happen to bump into some celebrities!☺ PS it was quite foggy when I went back in 2009 too!

I didn't learn until I was an adult and have never cycled much since - most of the ride is off road so didn't have to worry about traffic too much :)

I learned to cycle as an adult and have never cycled much - maybe once a year! Was worth biking the bridge though - despite a few wobbles...

Disappointed not to see a pic of you with Freddie and Jamie! My favourite pic is the big portrait one of the bridge looking moody under the International Orange heading.

Love that bridge - check out my personal FB for pics of the boys!

How amazing that you got to meet Freddie Flintoff and Jamie Redknap by chance. Shame it was so foggy but it must have been lovely cycling over the bridge, I would really like to visit SF one day

It was - can't believe I have a pic of me with Freddie in his bathrobe!! I love San Francisco - my time visit when it's been foggy but still a lot of fun :)