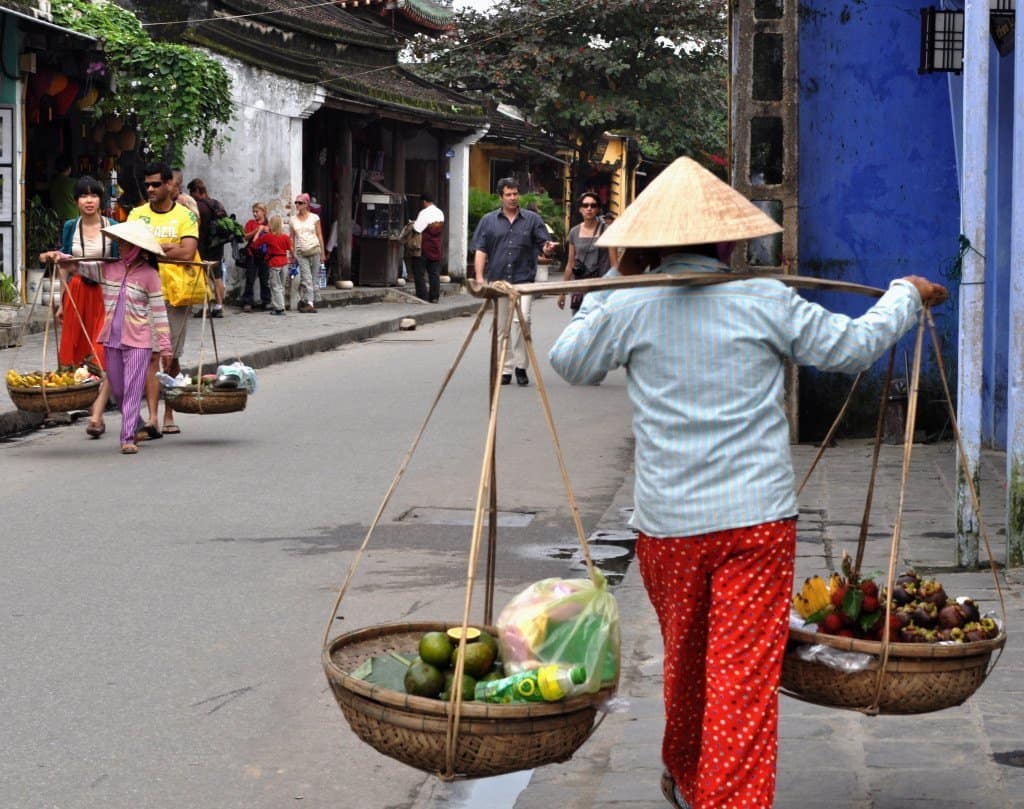 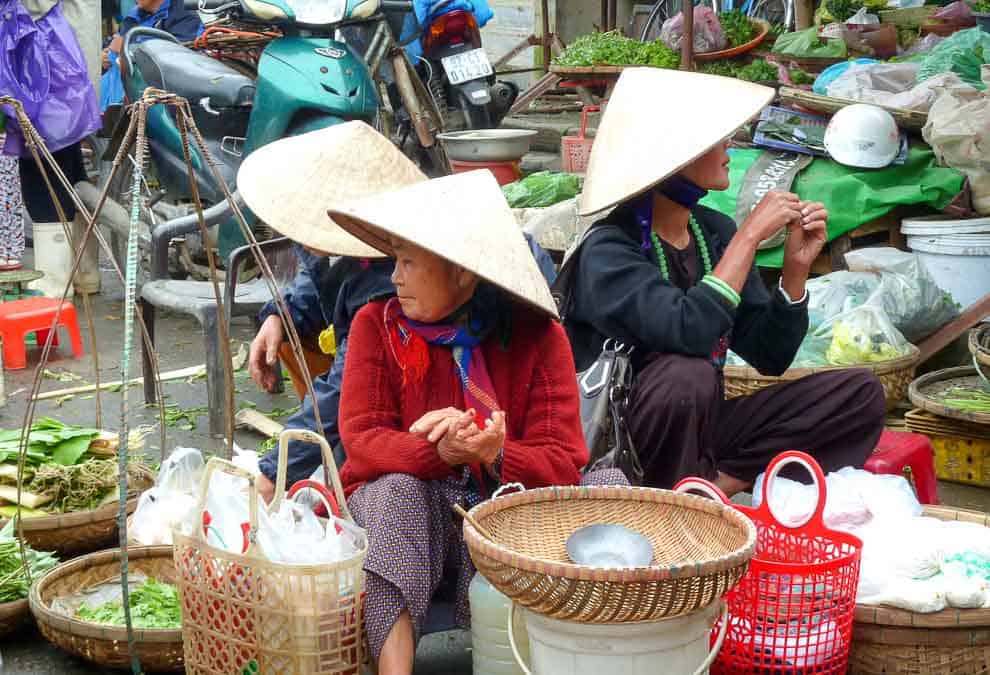 What does non la mean? 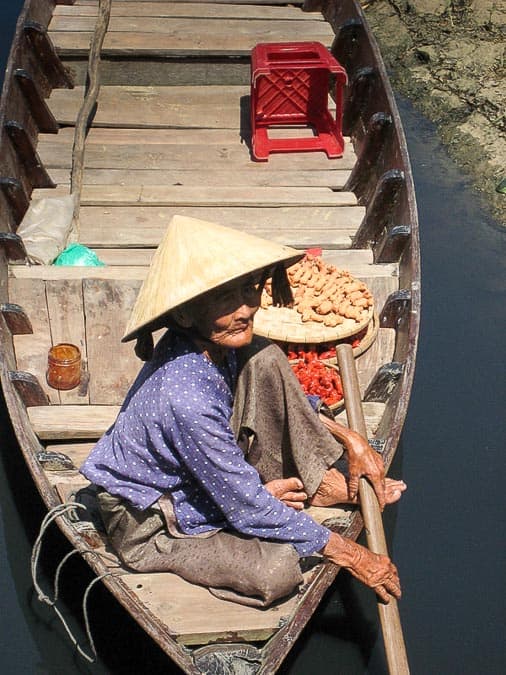 Woman in Hoi An wearing her non la hat

The hats are worn to protect the wearer from both the sun and rain and can also be used as a cooling fan or a makeshift basket for carrying things. Non la hats also make the perfect Vietnamese souvenir. I bought one in the market place in Hoi An but they are sold all over the country.

Buy non la online – click here to buy from the US and here to purchase from the UK.

Non la hats are generally associated with Vietnamese people working in the paddy fields or farmers in rural Vietnam.

You’ll still see a few people in large cities wearing non la. However, there are thousands of motorcycle and scooter riders nowadays and they’re required to wear helmets so the conical hats aren’t seen so much in places like Ho Chi Minh City.

The story behind the Non La hat 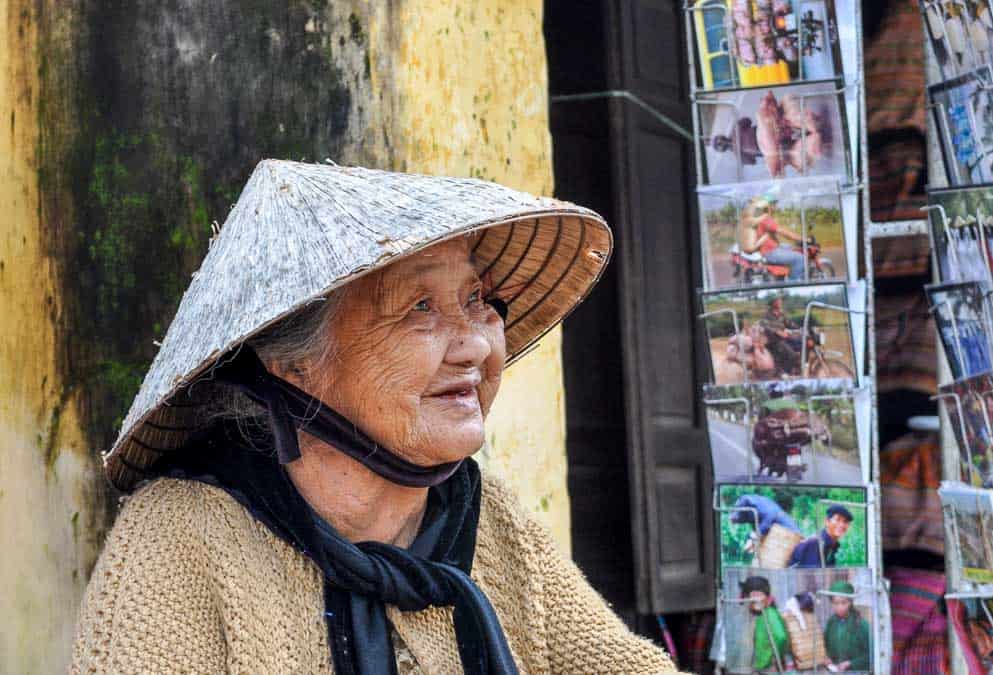 Although there are no definite origins of the Nón Lá, evidence of it has been found on inscribed on ancient bronzes and Ngoc Lu kettledrum which date back almost 3,000 years so this simple hat is proven to havae been around for centuries.

Vietnamese legend has it that, during a long period of torrential rain, (which happens a lot in Vietnam) a giant woman descended from the sky wearing a hat so large it shielded the people from the rain. The hat was made with four large leaves woven together with bamboo sticks.

The woman taught the people to grow vegetables, trees and herbs and they paid homage by honouring her as a goddess. The people made straw hats in the same shape as hers to protect themselves from the elements and the non la was created.

What is a non la hat made from? 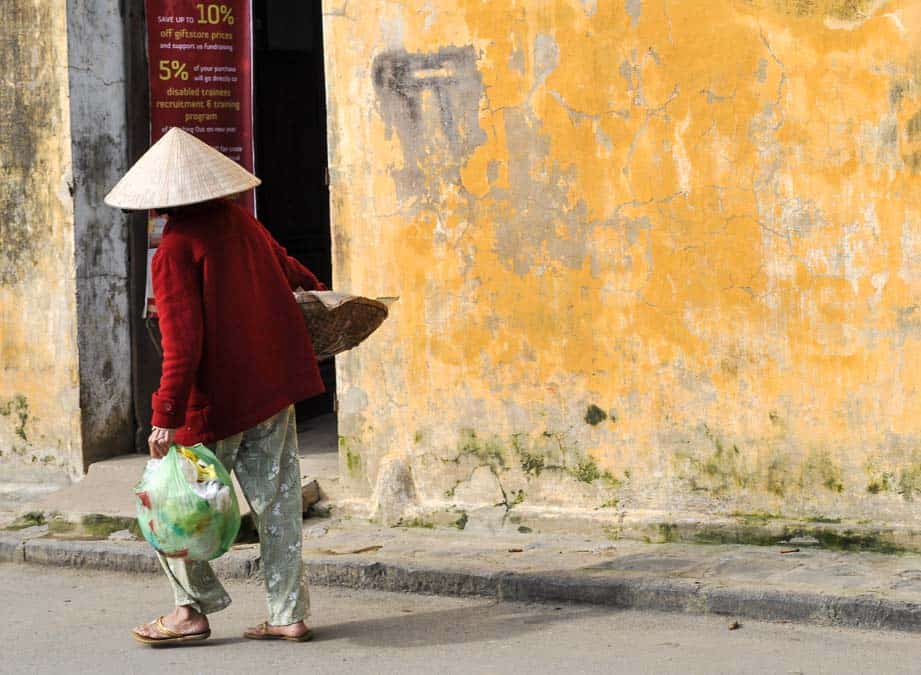 The non la is a symbol of Vietnam

The non la is hand-made generally from palm leaves or straw and bamboo and sometimes from the bark of the Moc tree. Whatever materials are to hand can be utilised.

The dried palm leaves are ironed or flattened into shape and then two layers are sewn onto 14-16 circular bamboo frames. The finished hat is left out in the sun to harden and finished with a coat of oil.

A chin strap made from fabric is sewn onto each side of the hat to stop it slipping off the wearers head.

Where are non la made? 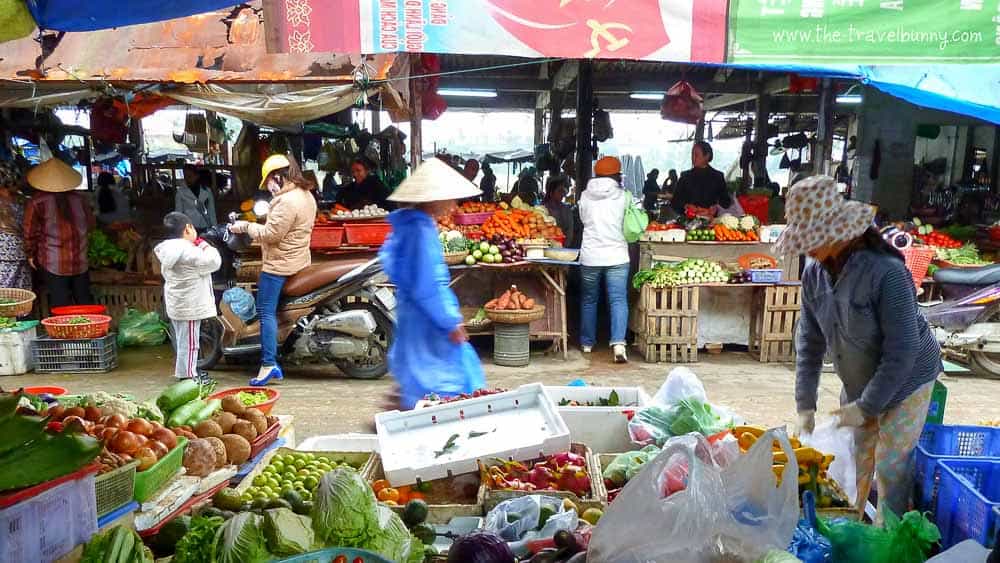 Skillful artisans make non la right across Vietnam but Chuong village near Hanoi is where most of the production takes place. It’s estimated that 80% of the villagers earn a living through hat production and 7,000 to 8,000 thousand conical hats are hand-crafted every day.

The skills and painstaking techniques used to create the conical hats have been passed down through families for generations. 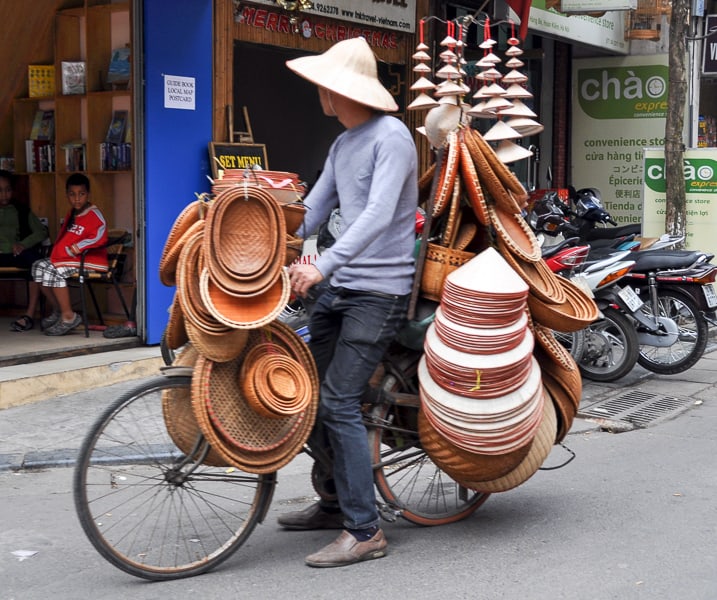 There are various versions of Asian conical hats but the Vietnamese conical hat forms the most perfectly circular cone which tapers smoothly from base to tip.

The nón bai tho (poem leaf hat) originated in the old Imperial Capital of Hue. Lines of verse are romantically stitched between the layers of palm leaf and are only visible when held up to the light.

Silhouettes of bamboo and other images can also be used while some hats are embellished with fine embroidery or painting featuring symbols of Vietnamese culture. The

Binh Dinh province is known for the thicker Go Cang non la whereas the Tay ethnic group is famous for its red Cao Bang hat.

Generally women wear a broad-rimmed version of the hat, whereas men wear one with a smaller brim and higher cone although I didn’t notice any difference during my time in Vietnam. 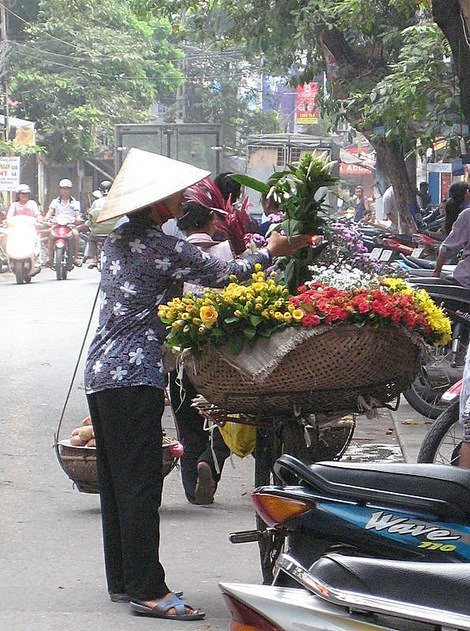 When I see an image like this I know immediately from the nón lá that it’s a place in Vietnam.

Hoi An – A Little Piece of Heaven

Hoi An – A Culinary Quest

Things to do in Mui Ne

Sightseeing and scooters in Saigon

A night and a day hanging in Halong Bay

Tomb and Temple Hopping in Hue

How many motorcycles in Ho Chi Minh City

Seeing in the New Year in Saigon

I didn't know about the poems inscribed inside some of these hats. That's just lovely. :)

I do have to mention that here in the Philippines, we have a similar hat called the 'salakot' and some versions of it, including that from my home region, is as perfectly conical as the non la. Not as well known or as widely worn anymore, though, sadly.

Hi Tita - I didn't know about the 'salakot'. It's a shame that these old traditions are dying out - it's happening here in the UK too...

The Colours of Hanoi | the travelbunny

Picture The World – Peru « The Urge To Wander

[...] to Suzanne of The travelbunny for my nomination. In turn I get to nominate two other bloggers to submit photos for other [...]

Greetings, Suzanne & many thanks for this fun nomination! :) At your suggestion, I've shared one of my images from India's Lodi Gardens with the Departureboard. And in turn, I've nominated street photographer, Cornelia, to share a photograph from her native Germany, and culinary enthusiast, Virginia, to submit one from a country of her choosing. Thanks again!

Hello Tricia - I'm looking forward to seeing your image and those of Cornelia and Virginia and also checking out their blogs. What a great way to discover new blogs!

Great choice of photo – it really sums up Vietnam to me. Look forward to seeing the next country choices!

Thanks Lucy - I loved your cafe shot too. The Picture the World project seems to be cranking up a gear!