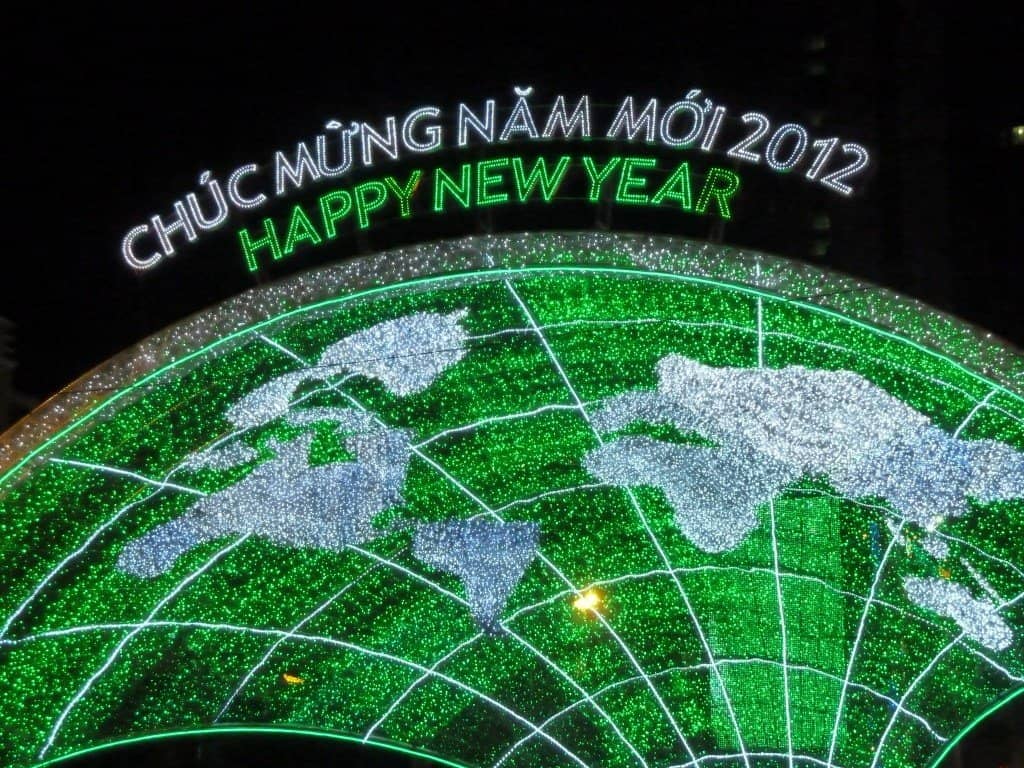 New Year in Saigon, or Ho Chi Minh City (HCMC) as it’s officially known, is an absolute blast. We’ve joined the city’s new year celebrations twice. We loved it so much we went back and did it all over again a few years later.

For our first New Year’s Eve in Ho Chi Minh City in 2012 we weren’t sure what to expect. We knew that the lunar New Year, Tet, is widely celebrated towards the end of January. But about the Western New Year? Would this be a non-event?  We weren’t disappointed; Vietnam most definitely sees in the Gregorian New Year. In Ho Chi Minh City they celebrate New Year in spectacular style.

We loved every minute of Saigon’s sparkling New Year celebrations. 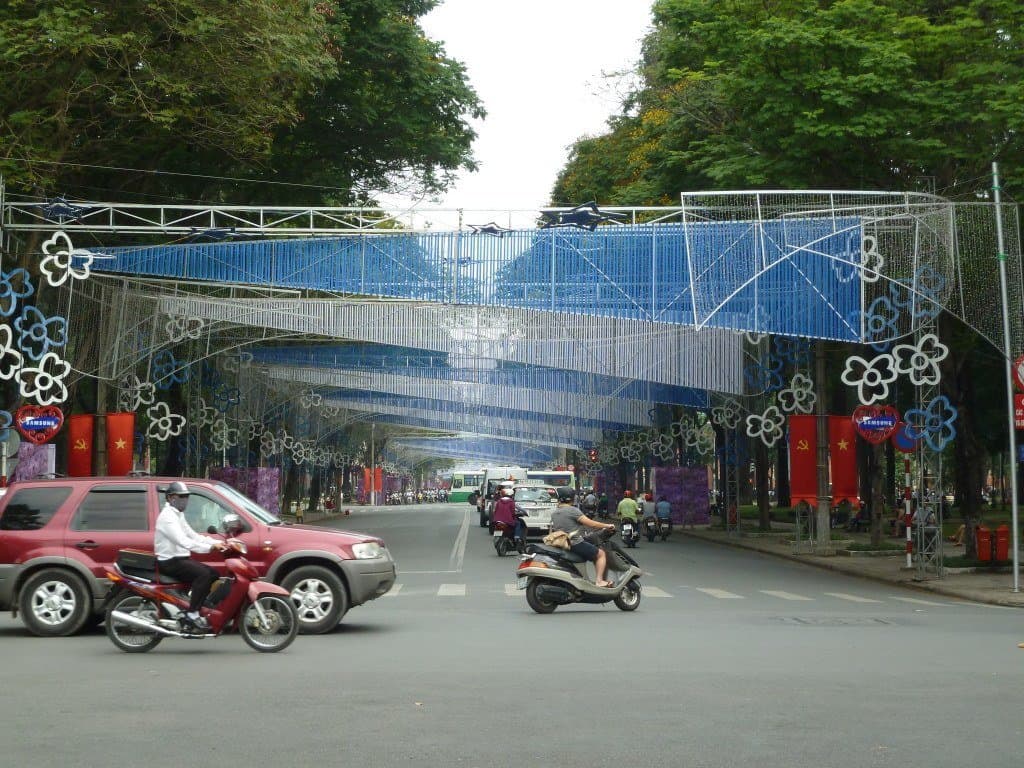 As soon as we arrived in Saigon on 30th December the first thing we noticed, well we couldn’t avoid it, was Abba’s ‘Happy New Year’ belting out from every shop, restaurant and hotel. In fact anywhere with a sound system was blasting it out. Whenever I hear it now it takes me right back to New Year in Ho Chi Minh City.

Vietnam has apparently adopted this song as their New Year theme tune and by the end of the first day if we couldn’t hear it playing we found ourselves humming it!

Check out the top attractions in Ho Chi Minh City 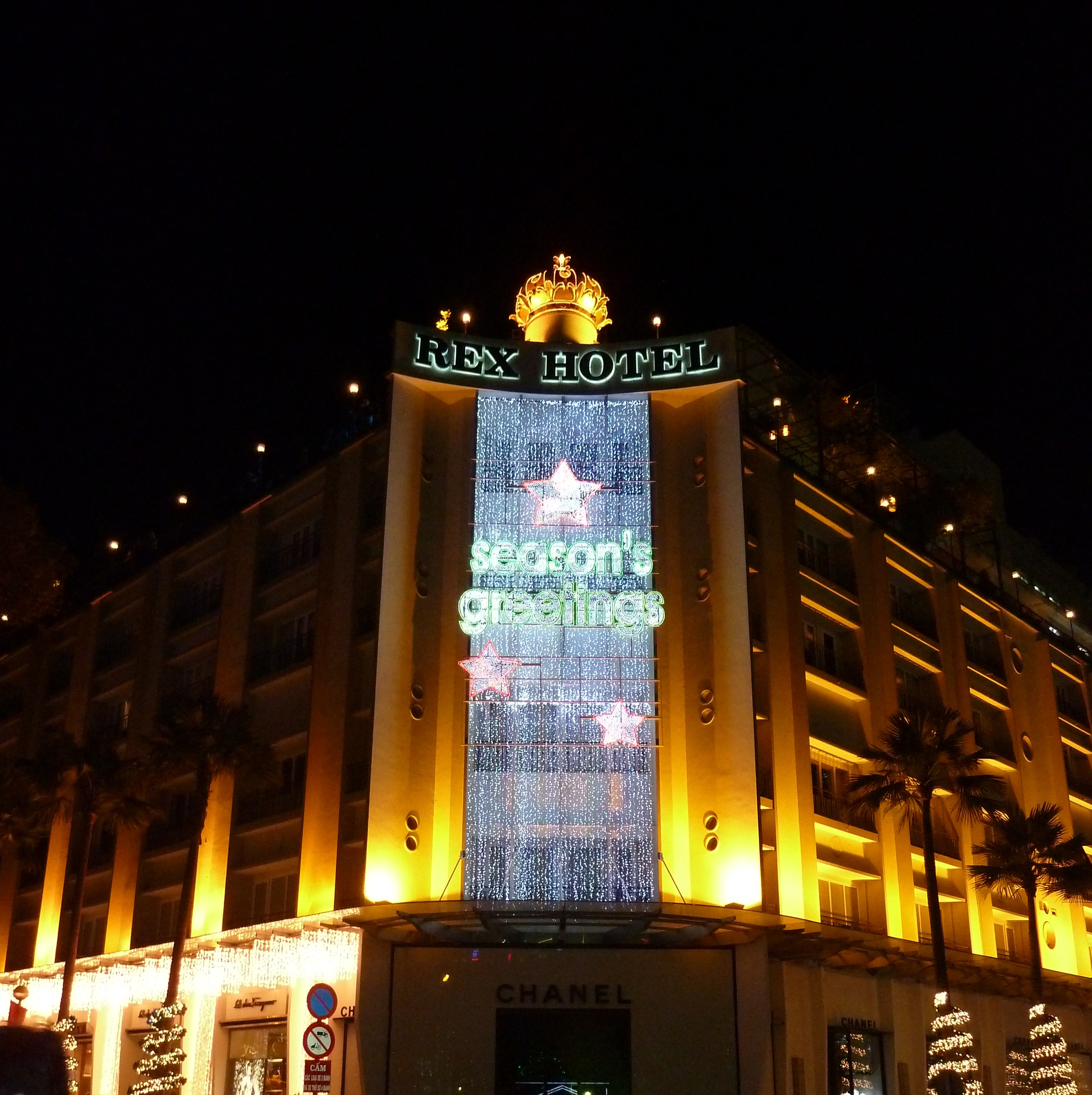 For our first New Year’s Eve in Saigon we stayed at The Rex Hotel which is very central and has a fabulous rooftop bar. As dusk fell that first evening we looked down on the city, enthralled, as it gradually lit up in a show of multi-coloured luminosity.

As well as the usual brightly lit neon billboard signs many of the tower blocks, hotels and shops were all lit in swathes of sparkling decorations. Pink petalled flowers were strung across streets, blue and silver stars and swags adorned another and a giant, gold dragon twisted and turned its fiery way down Le Loi Street. All this added to by the buzz of a million motor scooters with their lights creating a moving spectacle all of their own.

New Year in Saigon is one big spectacular light show. 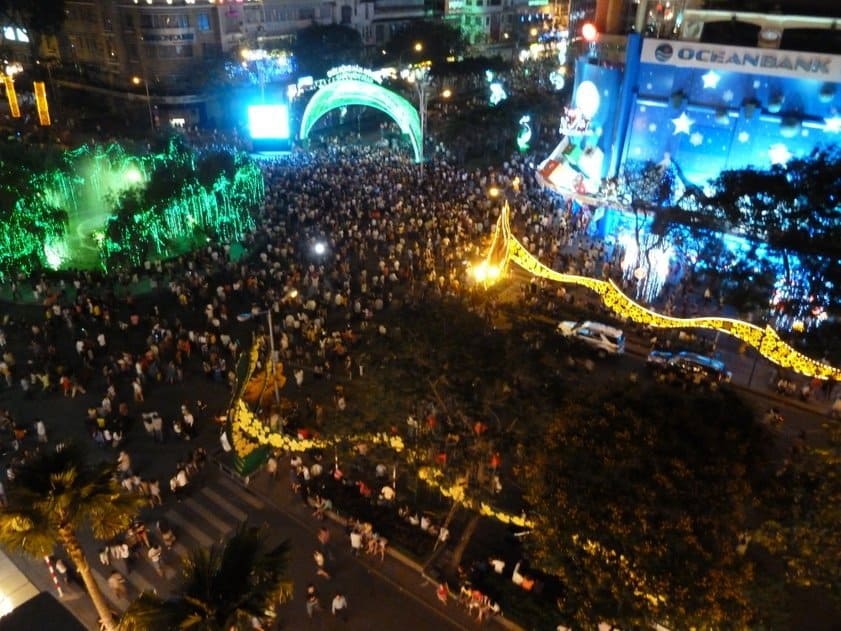 As with many of the larger hotels, it’s compulsory, when booking a room, to buy into their New Year celebrations. This meant dinner would be in The Rex Hotel on New Year’s Eve. But given its superb location and the view from the rooftop terrace we didn’t miss out on any of the atmosphere in the streets below – in fact, we had a fabulous view of everything and we went down to the street a couple of times through the evening to get up close to the celebrations.

The dinner was excellent with lots of authentic Vietnamese food, barbecued steak, lobster and chicken with a vast choice of salads, pastas – even frogs legs.  My favourite dish was the little clams in a coconut, chilli and peanut sauce – heaven. The wine waiters were very attentive and glasses topped up without a wait. The entertainment was excellent with a live band and dancing.

Where to stay in Ho Chi Minh City for New Year

For our first Saigon New Year we stayed at the Hotel Rex which was great and we really enjoyed breakfasting on the terrace and the general ambience of the hotel. For our second New Year’s Eve in Ho Chi Minh City we stayed at The Caravelle Hotel but celebrated New Year at Hotel Rex Saigon where we bought into their dinner and party on the terrace. It was just as good the second time around and I’d go back there again for their New Year banquet.

This is my preferred way to do New Year in HCMC because I feel the rooms at the Caravelle are better than at the Rex. They’re bigger and lighter and more modern. The Rex rooms can vary a lot in size and some rooms are quite dark. However, their New Year banquet it amazing.

The Caravelle has a fabulous rooftop bar, Saigon Saigon, which is a fabulous place to start an evening out. Cocktails in Saigon Saigon before heading out for dinner make for a very special evening. I think the Caravelle Hotel is the best hotel to stay in Ho Chi Minh City. 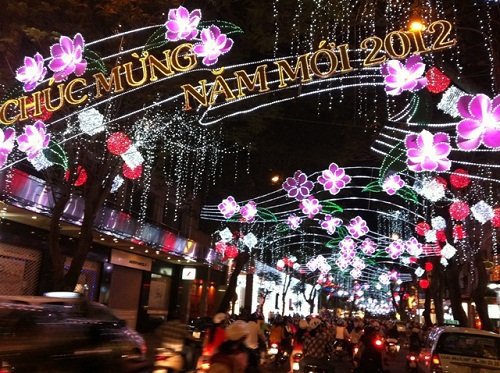 New Year on the streets of Ho Chi Minh City

After dinner, we wanted to go and join the ever-growing crowd in the steamy city outside. The roads had closed  to traffic and in the place of scooters were now thousands of people of all ages and nationalities milling around waiting for midnight.  Small children with helium balloons, groups of teenagers, families and tourists all smiling and gently jostling for the best view.

Live music rang out from a space-ship like stage further down the street and vibrant green globes of the earth with large digital counters ticked down the minutes and seconds – a sense of anticipation filled the air. Ten seconds to go and we all joined in the countdown ending in a deafening cheer at midnight as the crowd exploded along with the fireworks and Abba’s ‘Happy New Year’ rang out at mega decibels. New Year Saigon style – absolutely brilliant!

Read more about Ho Chi Minh City: What to see and do in HCMC 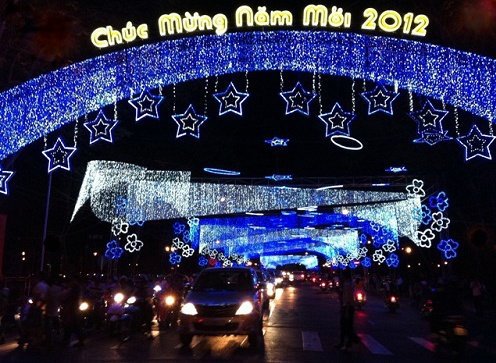 If you ever get the chance to celebrate New Year Saigon style it’ll be one to remember. On this, the day of the Lunar New Year, I wish you all a very happy, healthy year and as the Vietnamese would say “Chúc Mừng Năm Mới!”

PIN IT FOR LATER…!

Some of the posts on this site contain affiliate links and I may earn from qualifying purchases. If you buy an item/accommodation/flight via this site I receive a small commission at no extra cost to you. If you choose to buy anything it’s very much appreciated, thank you.

Hoi An - A Little Piece of Heaven | The Travelbunny

[…] From Hoi An, we headed south to the city of scooters, Ho Chi Minh City – or Saigon, as it’s still called by many, to see in the New Year Saigon Style. […]

Saigon - Scooters and Sightseeing | The Travelbunny

[…] were in Saigon for New Year which we celebrated at The Rex Hotel with a fantastic banquet and entertainment. Saigon really gets […]

I spent New Year’s Eve in Saigon in 2007. It was a fabulous atmosphere and a great event, despite the fact that I managed to get robbed TWICE! First they pick-pocketed my wallet, and then later, my phone. Neither of the items was worth anything to worry about and it certainly didn’t spoil my evening (or make me think any less of Vietnam), but do watch your pockets on NYE, and leave the expensive phone at home – it is a prime pick-pocketing occasion.

No way - I've been to Vietnam 3 times and never had any problems. You're right though it's so packed NYE that it would be easy to be pick-pocketed so thanks for highlighting this problem. Hope you have a fab New Year this year and lots of happy travels in 2014 :)