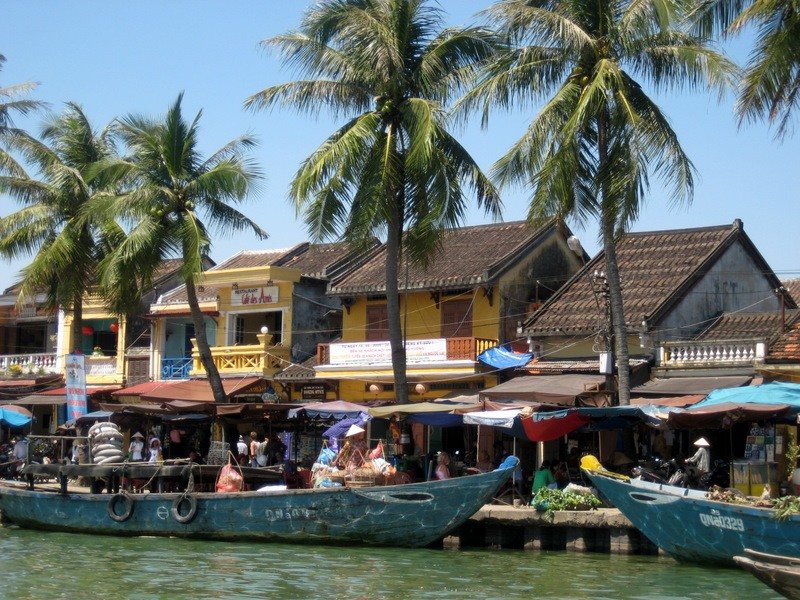 After spending the first two nights of our Vietnam tour in Hanoi, and another in Halong Bay, we travelled south – half way down Vietnam’s coast to our third destination. Hoi An is the hippest heritage town on the Vietnam and a UNESCO World Heritage site. 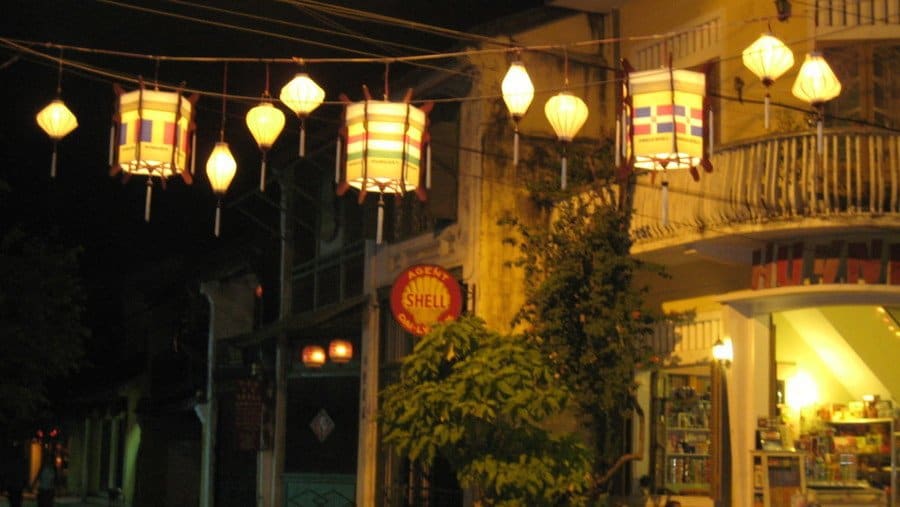 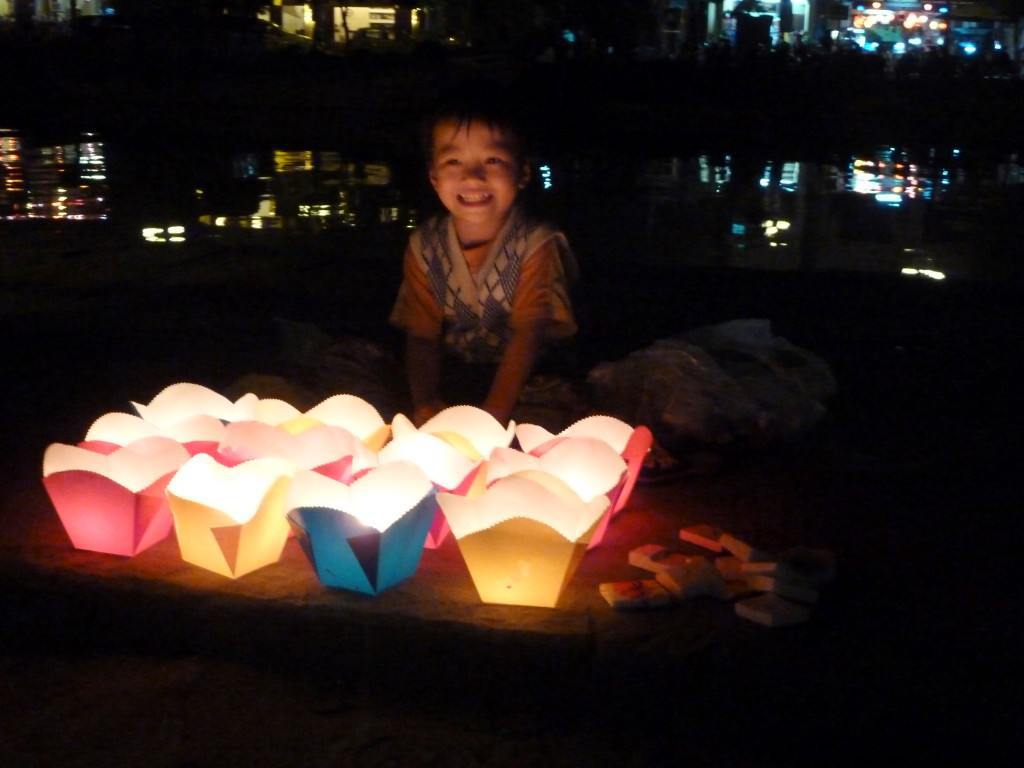 I was totally captivated from the minute I set foot in Hoi An.  It was dusk as we walked beside the Thu Bon River which flows through the town; flickering candles floated on the water and colourful lanterns were strung from moss-covered rooftops across narrow streets.  We’d arrived in Hoi An on the night of the full moon. Magical.

Held on the 14th day of every lunar month if you’re heading to Hoi An it’s worth checking the calendar to work this night into your schedule.  If you’re looking for a full moon party, this isn’t it. Tonight is for townspeople to honour their history and ancestors and I suspect to draw in a few visitors too.  The ancient streets are illuminated with hundreds of lanterns, their reflections casting multicoloured ripples across the water and a soft glow over the town – fluorescent lighting is not allowed. 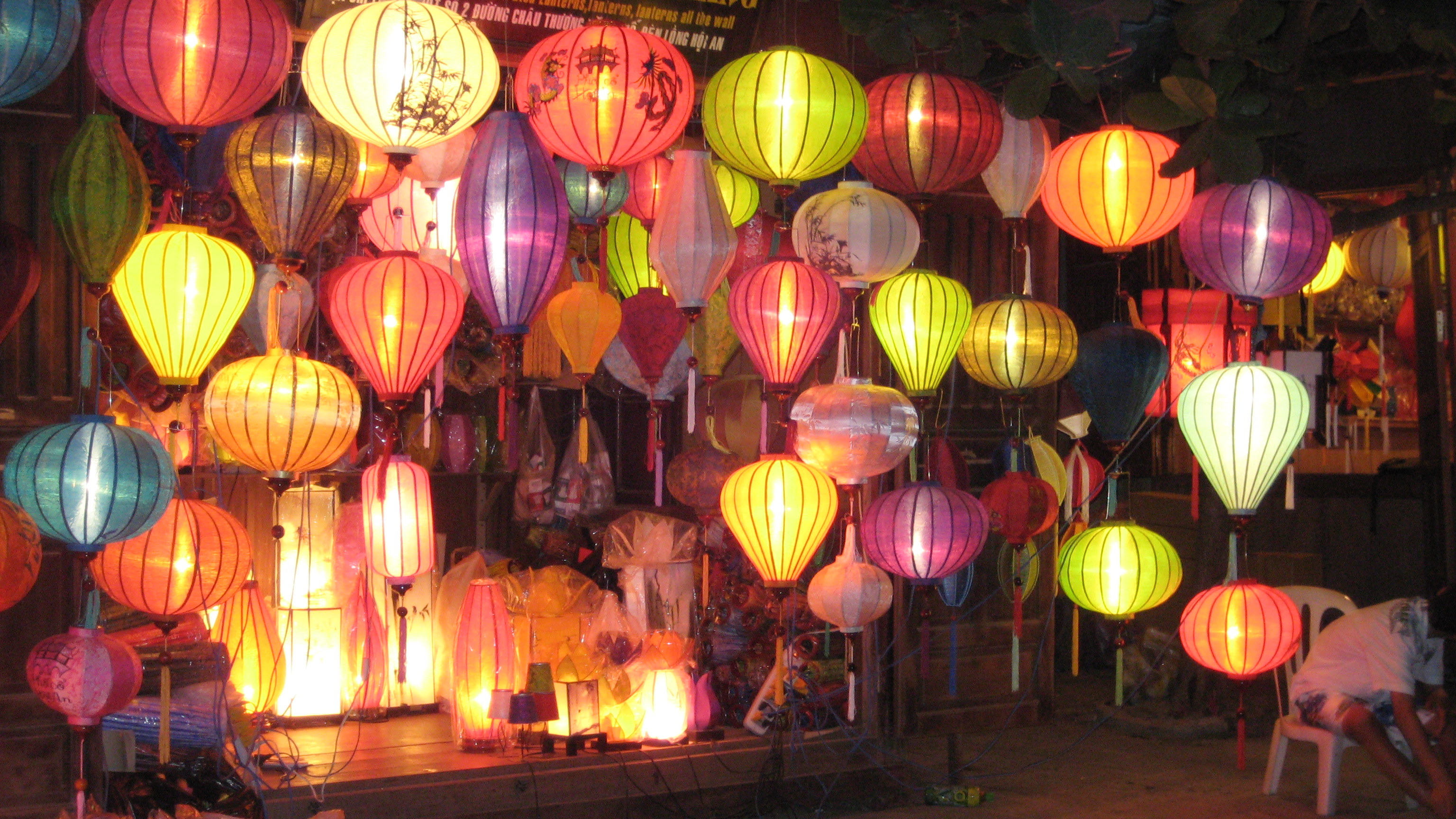 The Vietnamese, dressed in traditional costume, play beautiful, lilting traditional music aboard a floating wooden junk; the children show-off martial arts and perform plays.  In the old quarter, it’s pedestrians only until 9:30 pm which adds to the peace and tranquillity. We wandered spellbound through the streets, amazed that somewhere so unique and fascinating still existed.

Four years later I’m happy to say not much has changed – the lantern shops have moved to the other side of the river and there are more tourists now but Hoi An remains as enchanting as ever.  It’s also incredibly photogenic. 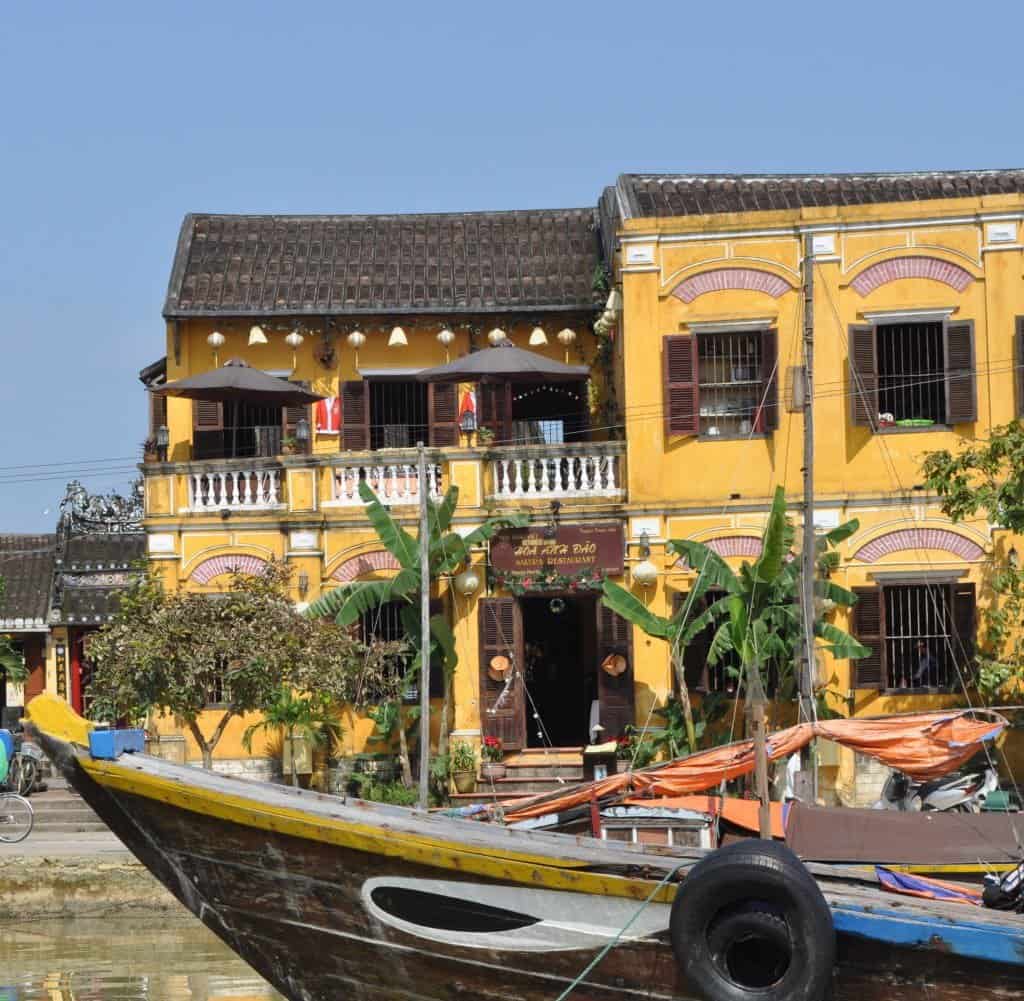 Boats on Hoi An River

The town, which once traded in spice and silk, is a UNESCO heritage site and has been beautifully preserved; its pagodas, temples and the many traditional dwellings remain much as when they were originally built although many now function as restaurants and shops. 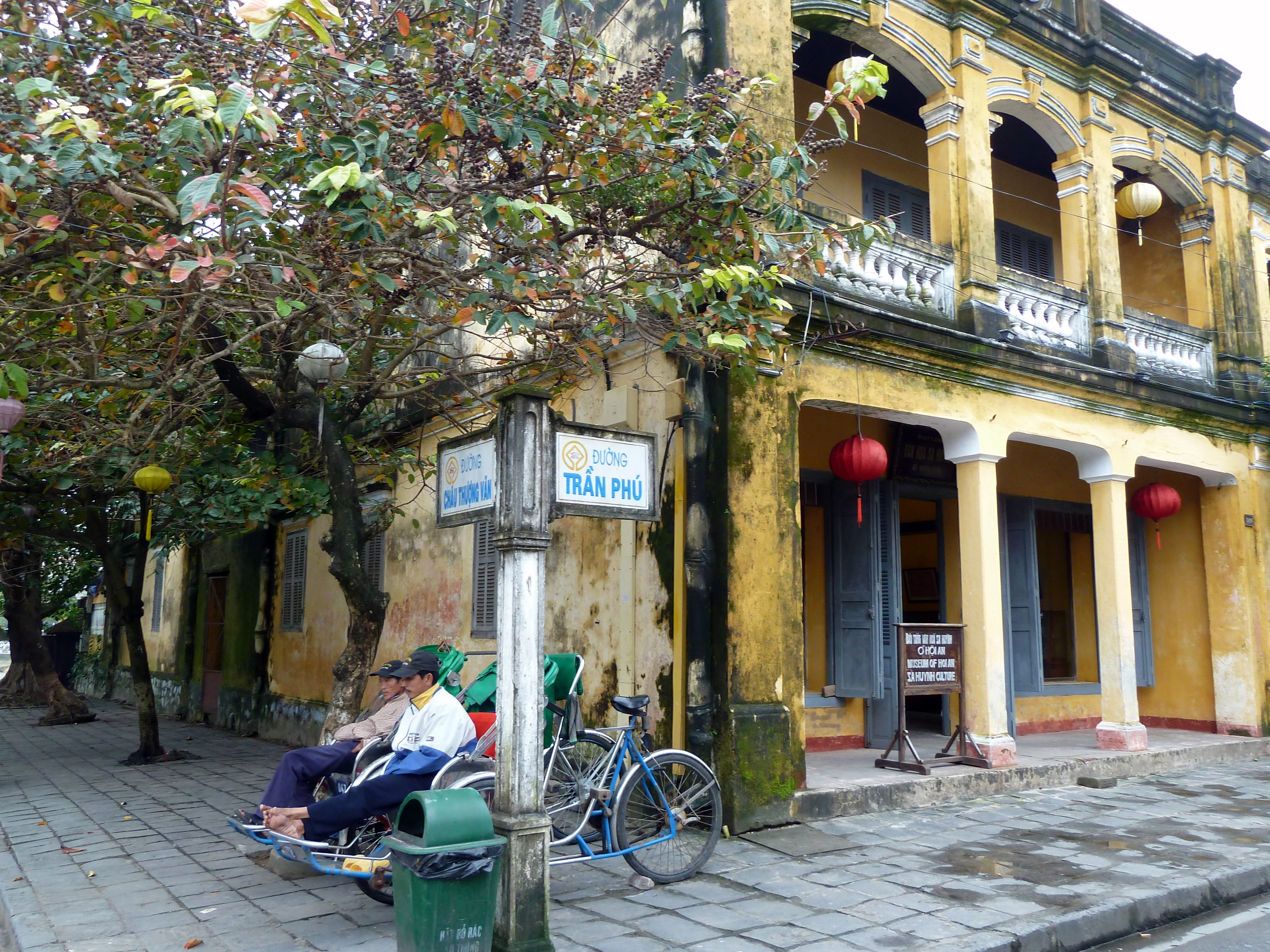 Vibrant plants trail from balconies down ochre, moss-covered walls.  souvenir sellers wearing coolie hats mingle with tourists posing for photos – at a small price of course. Lots of little shops crammed into the labyrinth of streets and alleyways sell local crafts, lacquer-work and silks.  Hoi An is very art orientated. 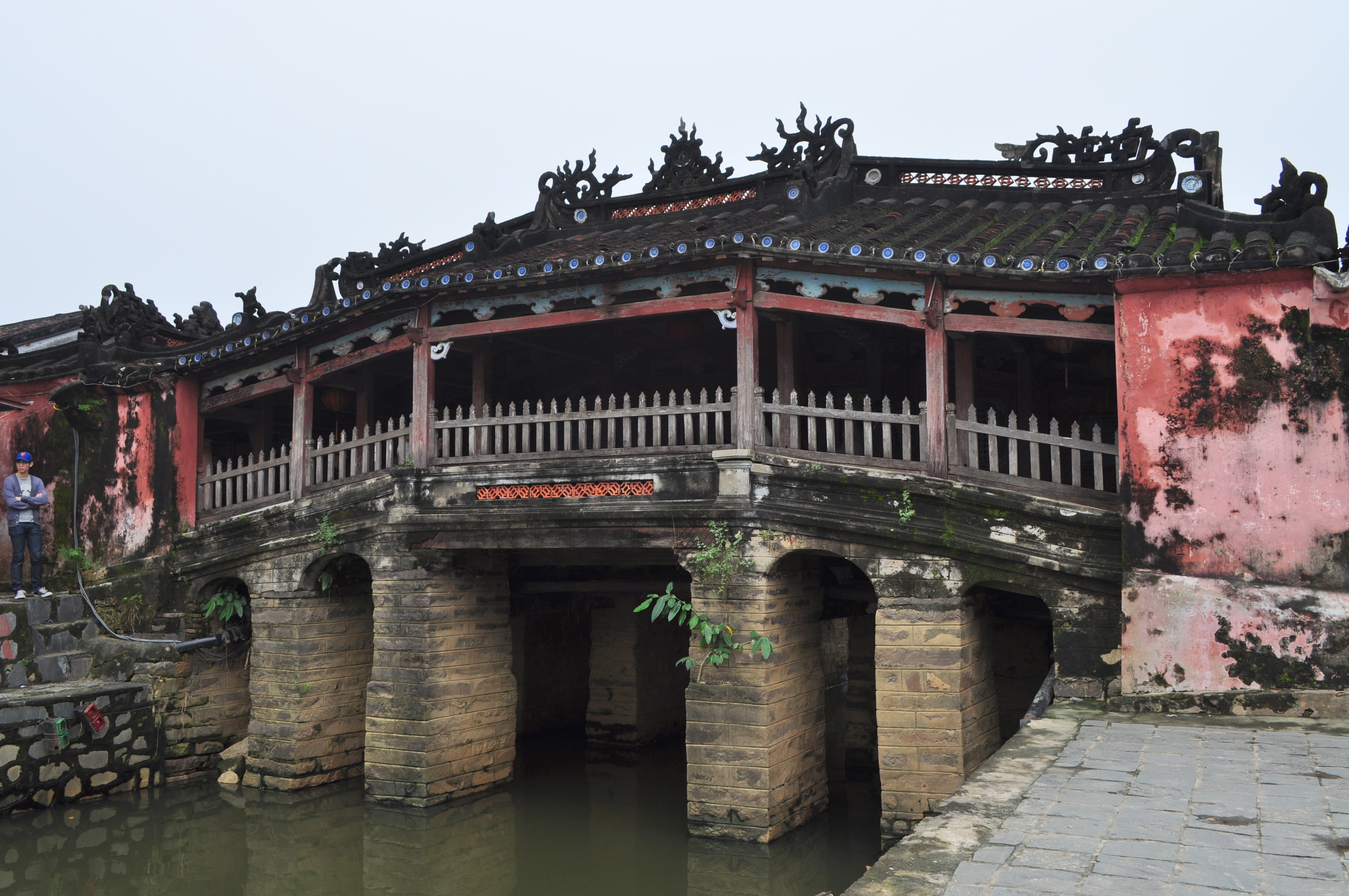 There’s culture to discover too.  Walk along the main street, one up from the river and you can’t fail to miss the Japanese Covered Bridge.  A symbol of the town, this wooden structure once connected the old Chinese quarter to Hoi An.  Built in 1593 by the Japanese community, it houses a shrine to the Tao god, Bac De.  Free to cross but if you stop to take photos you could be asked for a small admission fee. 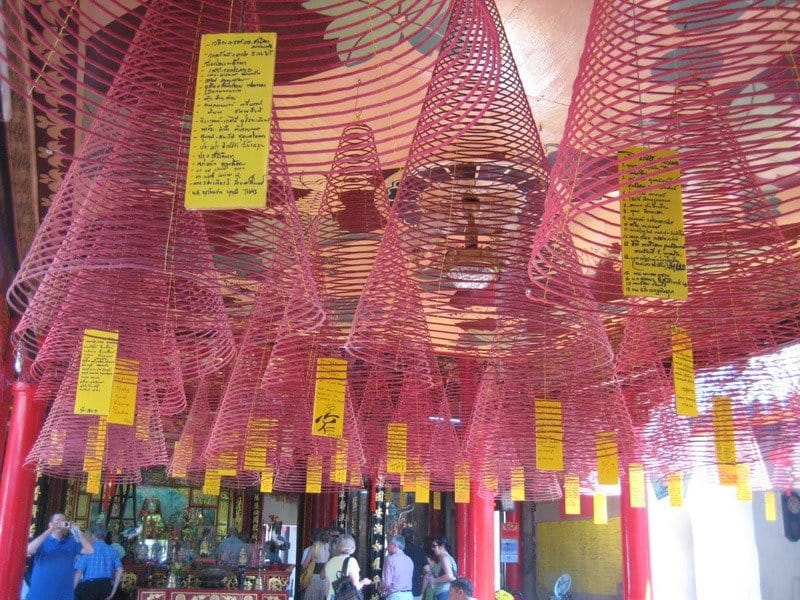 Phuc Kien Assembly Hall is the grandest of four assembly halls in the town and home to elaborate carvings, shrines, Chinese dragons. Conical incense burners are suspended from the ceiling. Yellow tags dangle from the centre inscribed with prayers and wishes. A prayer lasts as long as the cone smoulders. It’s very fragrant inside.  Enter the building through an ornate gateway from Tran Phu Street. 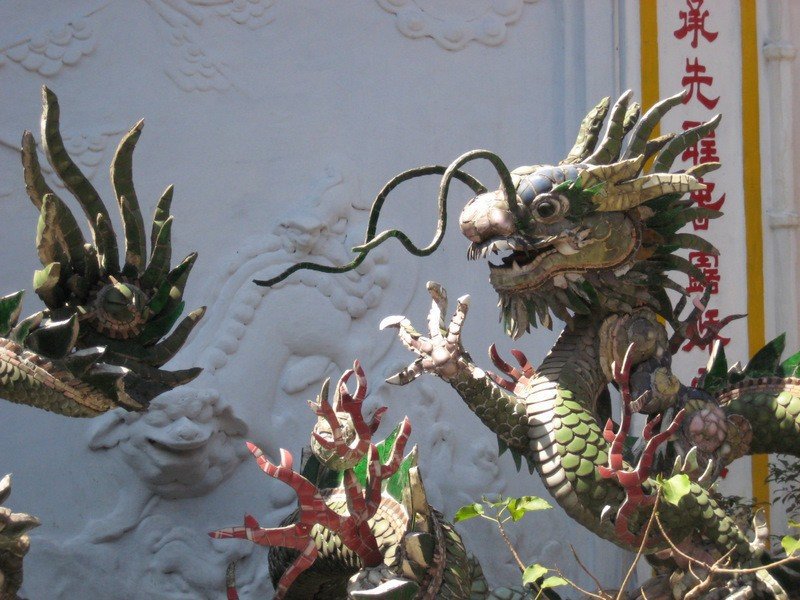 House of Tan Ky  is a traditional ancient Hoi An home and built around a small courtyard; ceilings are embellished with delicate crab shell designs and the pillars with mother-of-pearl inlay. On the walls are markers showing the height of past flood waters. Let’s just say the electrical sockets are all fitted at over six-foot and the furniture is easily moved up to the second floor.

When we were in Hoi An in 2008 the river would frequently flood. One day we’d be sitting outside a bar watching the world go by the next day it would be accessible only by sampan.

The Vietnamese make offerings to their deceased ancestors and there are many shrines around town in shops, on pavements and this one which I spotted in a tree. 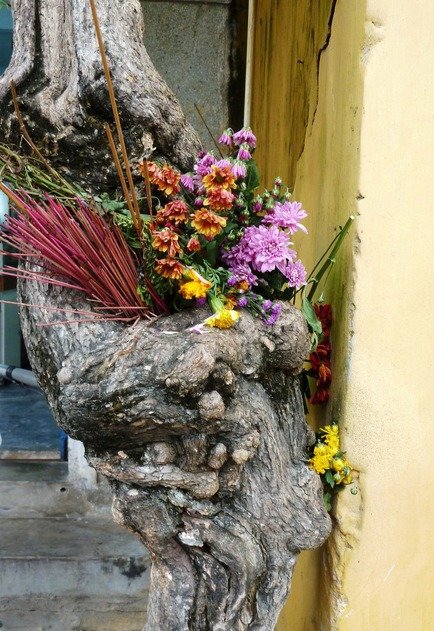 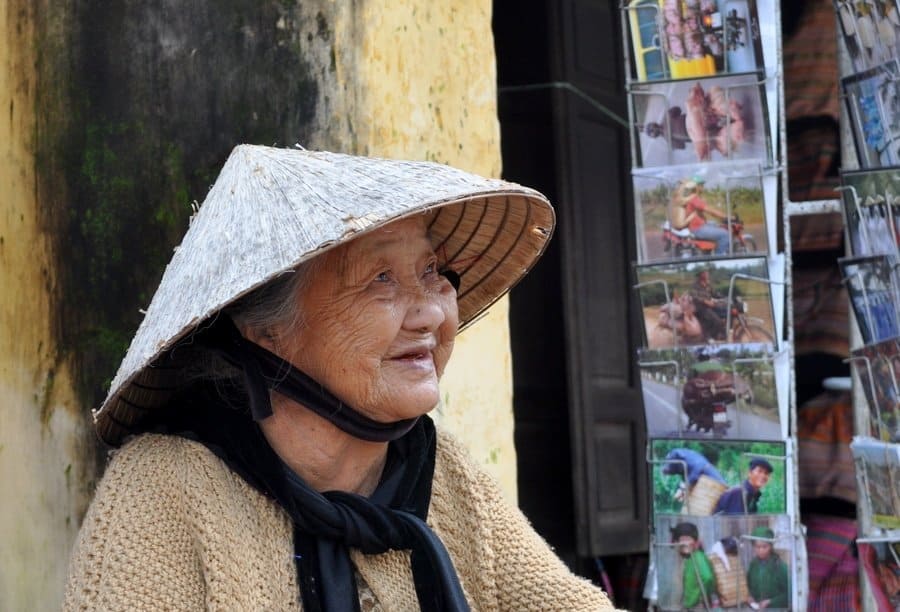 Hoi An is bursting at the seams with tailor shops.   Be warned, you get what you pay for and it’s worth buying the best fabric you can afford. However, you can also pay over the odds so shop around.  At some of the smaller shops it’s worth having something made just for the banter. We had lots of giggles with a very cheeky seamstress and I came away with some linen trousers that fitted perfectly. 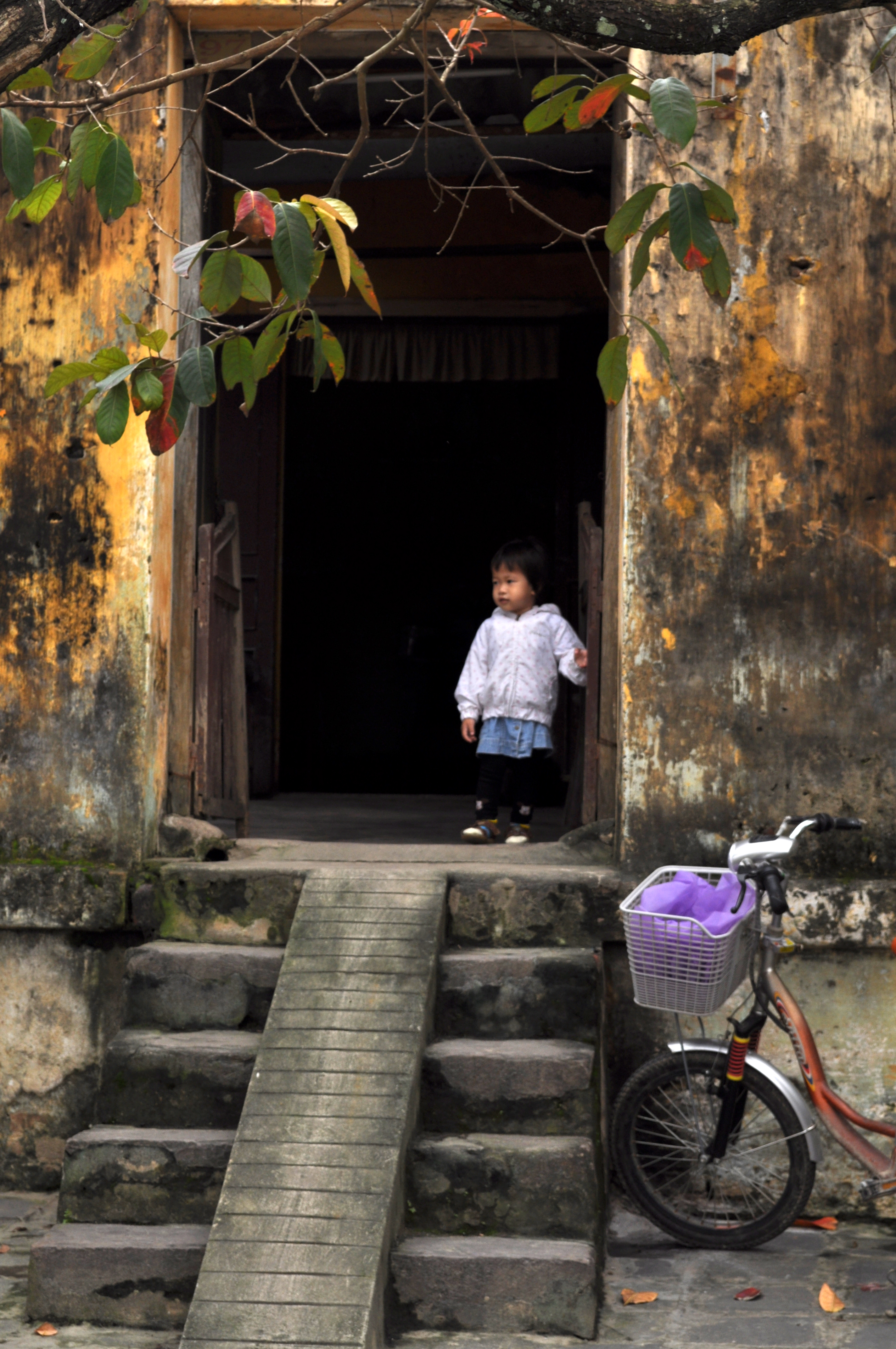 Some of the best eateries we found were The Cargo Club serving traditional Hoi An specialities and other Vietnamese favourites in a beautiful old shop-house. The best tables are on the balcony overlooking the river. Before and Now on Le Loi Street is one of the more popular bars in Hoi An with pool table, video screens and good music. You’ll hear it before you see it.  The upstairs restaurant serves excellent local cuisine or pizza and pasta if you don’t fancy Vietnamese, although why anyone wouldn’t beats me.  The best place we ate at was Lantern Town where the food and service were excellent. The Miss Hoi An cocktails were pretty good too.

There are great bars all over town, we liked Tam Tams. The cheapest beers were in the bars overlooking the river next to the market and worked out at around 35p a bottle.

Finally, if you just want to chill then you can do that too. Rent a bike or hire a pillion ride on a scooter and head the 2-3k to Cua Dai Beach.  Here you can kick back and relax on the pristine sands of one of the best beaches in Vietnam . Be warned, though – you may have to share with the occasional herd of cows. 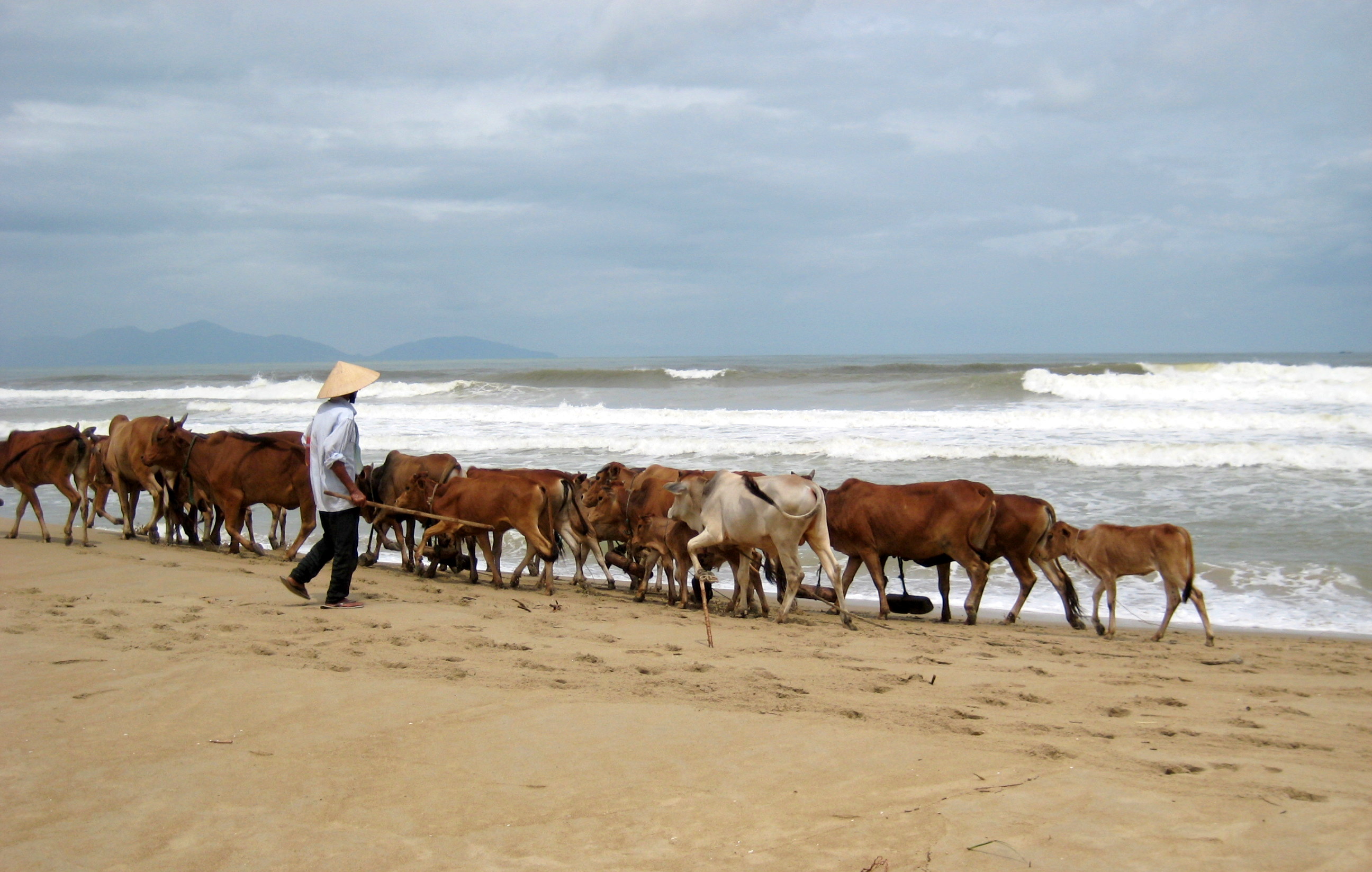 Where to stay in Hoi An

Our Hoi An hotel was The Palm Garden Resort in a gorgeous beach bungalow overlooking the sea. We love this hotel and have stayed there three times now. 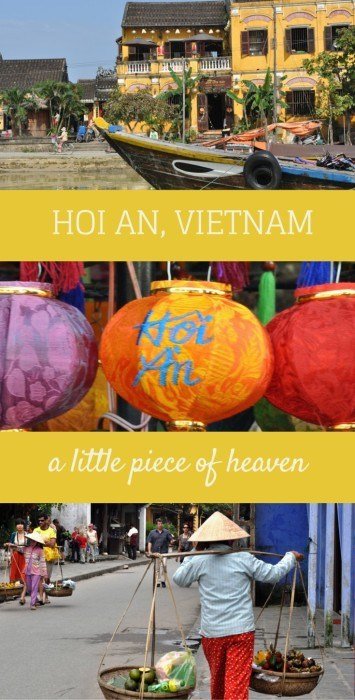 From Hoi An, we headed south to the city of scooters, Ho Chi Minh City – or Saigon, as it’s still called by many, to see in the New Year Saigon Style.

I loved Hoi An... the scenery, the beach, the relaxed vibe, the food! Hope i can go back there someday :) x

Me too - once of the most magical places I've ever visited :)

Enjoyed reading your post! I'm heading to Vietnam soon, and I can't wait to see Hoi An. The lantern festival sounds so good!

The lantern festival is not your usual full moon party - much more gentle. Have a great trip.

My Travel Inspirations | The Travelbunny

[…] you know my blog you’ll know I love Vietnam.  The food is fresh, vibrant and bursting with flavour, the history both modern and ancient is […]

Vietnam - Tomb and Temple Hopping in Hue | The Travelbunny

[…] Our visit to Hue was in October 2008 – I’ve added it into the Vietnam Series here because if you were to visit Vietnam, Hue would fit into your itinerary either before or after a visit to Hoi An. […]

Saigon - Scooters and Sightseeing | The Travelbunny

[…] with many visitors flying into the city before moving on to explore other parts of the country like Hoi An, Hue or Hanoi. It’s a city of modern high-rise buildings, traditional Vietnamese tube houses […]