A Night and a Day in Ha Long Bay 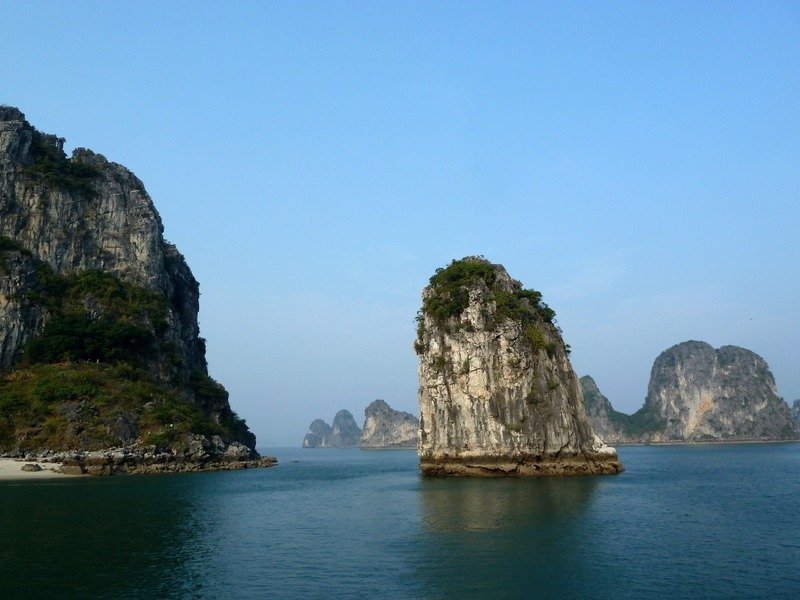 Ha Long Bay in Vietnam translates to Bay of the Descending Dragon and has recently become one of the new seven natural wonders of the world. And truly wonderous it is. A mystical landscape where thousands of limestone karsts burst breathtakingly skywards from the depths of the sparkling, emerald-green South China Seas.

We spent a day cruising through this stunning scenery followed by a night moored amid the beautiful limestone formations before returning to port the following afternoon, via Vung Vieng, one of the bay’s four floating fishing villages.

Our Indochina Junk mini-bus collected us from our Hanoi hotel at 8 a.m. on a warm December morning and set off on the 2.5 hour drive. Time passed quickly as there was so much to look at en-route; observing everyday Vietnamese life was fascinating.

Water buffalo waded through the fields while farmers in their coolie hats tended the vibrant rice fields, groups of school children in pristine uniforms cycled to school and scooters tooted at anything that came into view – there’d be no shut-eye with all that noise. Didn’t matter though – I was far too excited to sleep!

We approached the packed port where hundreds of boats were jostling as hoards of tourists were boarding.  We drove straight past and stopped at a smaller quay around the harbour.  Indochina Junks have permission to visit a different, quieter part of the bay from all the other tourist boats.

Bai Tu Long Bay (Baby Dragon Bay) takes up 3/4 of the Halong Bay area and is just as stunning but quieter, calmer and serene – just as it should be.  After checking-in at the office we took a small boat out to the four Indochina Junks moored offshore.

Our junk, although you could hardly call it a junk with its teak panelling, crisp cotton tablecloths and ornate decoration, was The Dragon’s Pearl (below) modelled on the traditional Chinese junks that used to sail these waters – although I doubt the originals had sun-beds. 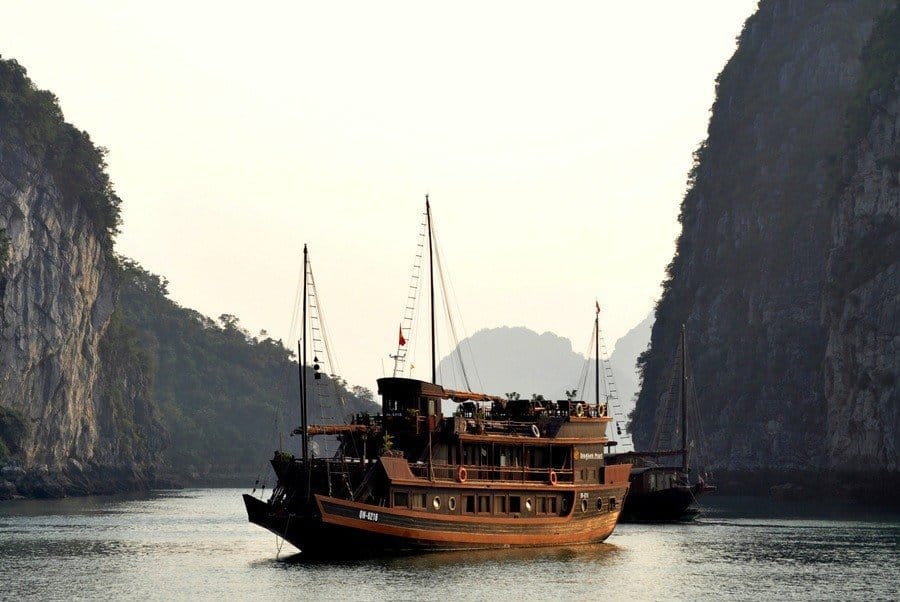 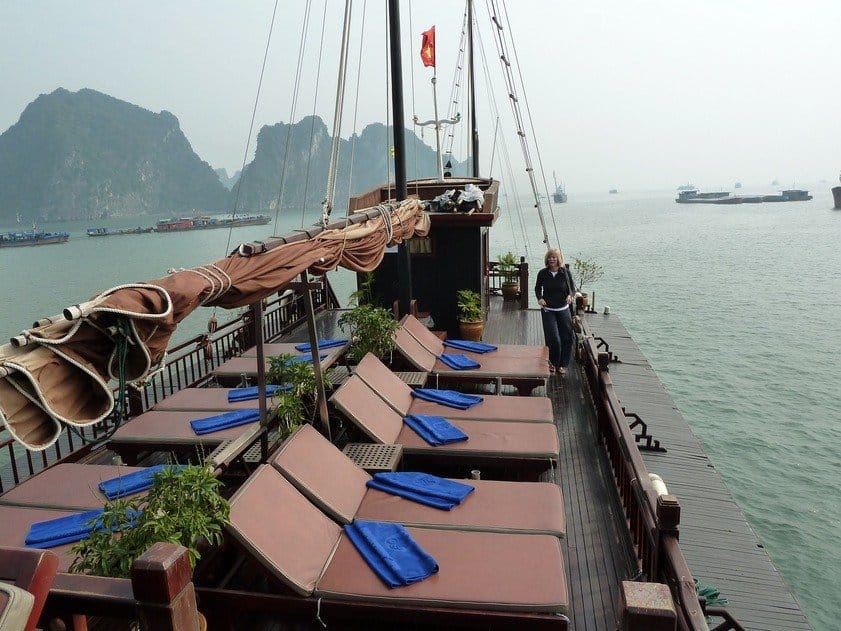 We headed off away from the port and as we slipped deeper into the bay the waters became more aquamarine and translucent and we relaxed on deck taking in the peacefulness and breathtaking beauty of our surroundings. As we drifted onwards the towering limestone, almost vertical, outcrops loomed towards us, their lofty tops covered in dense foliage as they stretched into the horizon and beyond. 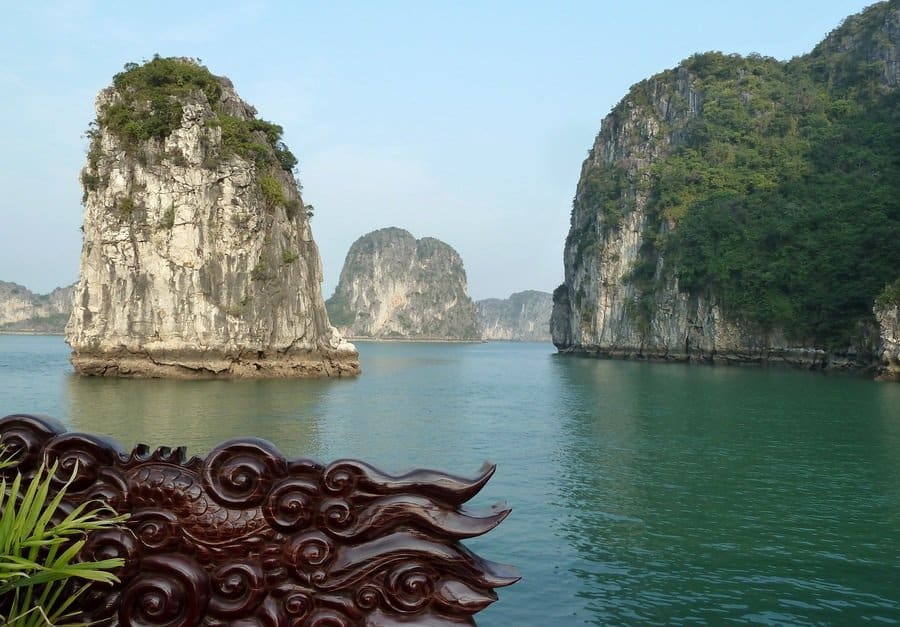 We dropped anchor and lunch was served on the top deck – a seafood banquet. Red bean and lotus seed soup and a succulent vegetable salad for starters followed by Clams in Pineapple Sauce, Deep Fried Prawns with Garlic Butter, Vung Vieng Minced Oyster with Herbs, Steamed Fish with Soya Sauce, Stir Fried Vegetables and Fragrant Steamed Rice.  Dessert was fresh fruit.  If the food carried on like this they’d have to wheel me off that junk… 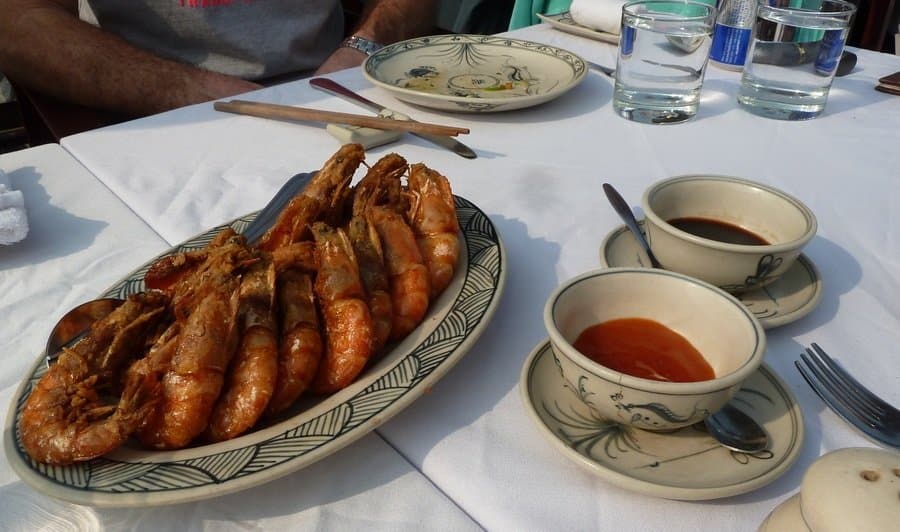 That afternoon we stopped off at a small island where there was an opportunity to kayak, visit Thien Canh Son Cave with its stalactites and giant cauliflower-like stalagmites or swim and chill out on the beach.  A game of football kicked off on the sand and we stayed, nicely mellowed, and watched the turquoise waters turn amber as the sun dipped below the horizon. 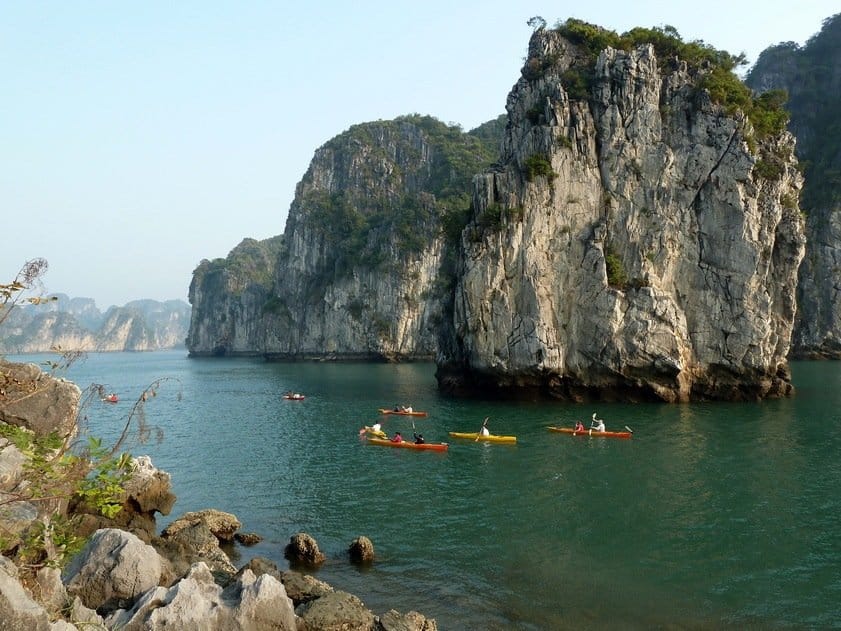 Dinner that night was another never-ending feast – it just seemed to keep coming and coming.  Eight mouth-watering courses in all interspersed with amazingly intricate fruit carvings which the waiter presented with a flourish to much applause.

There were 19 guests on board of varying nationalities. You’d have thought they were feeding 50 of us. There was even cake as a Belgian guest was celebrating a special birthday. We sat up chatting over a few glasses of wine with some of the other guests while an American guy strummed away on guitar and the moon cast a silver sheen across the water. 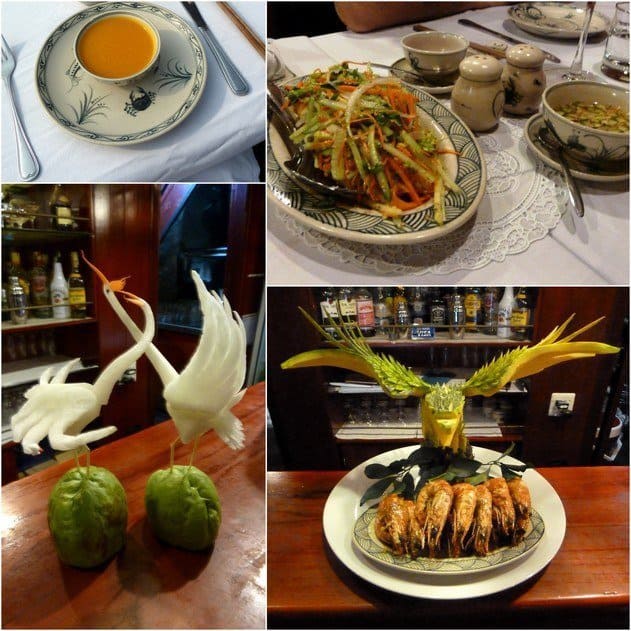 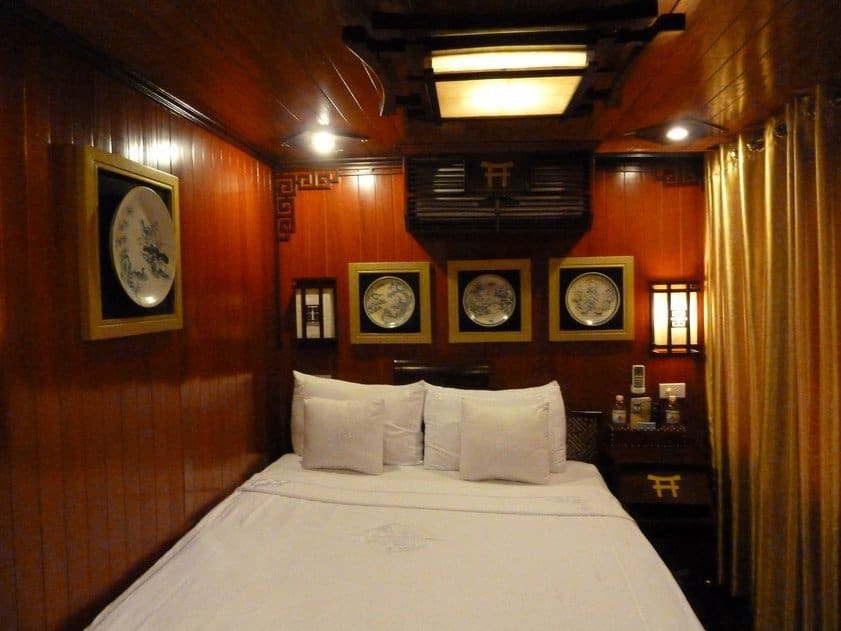 After a sound night’s sleep in our cute little cabin (above) but only after locating the blanket, we were up early to catch the sunrise. A steaming Vietnamese coffee helped get us going. Dark, strong and sweetened with condensed milk. Perfect at 6.30 a.m. The mists had come down overnight and it was chilly but the sunrise more than made up for it. 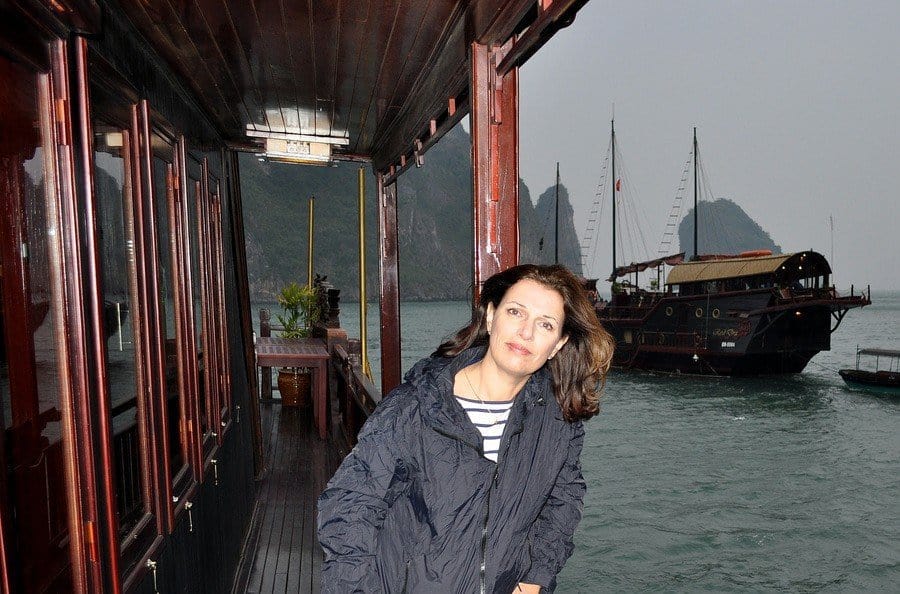 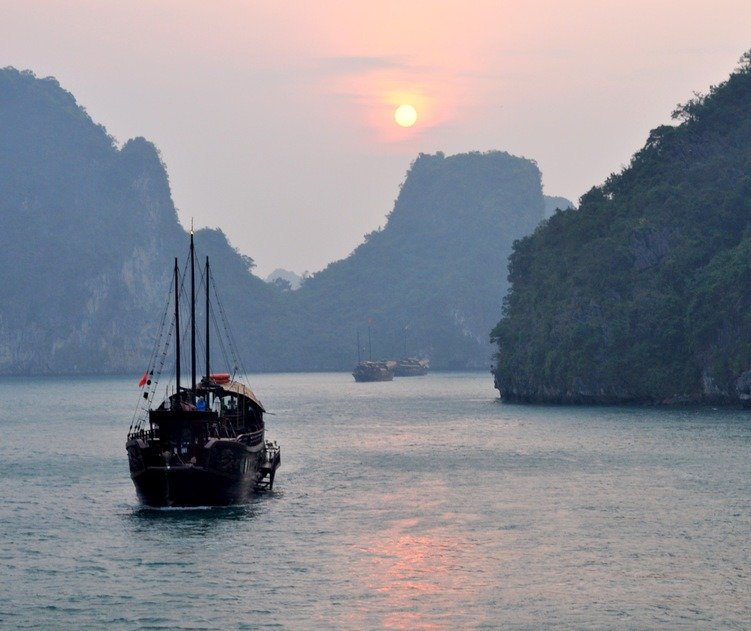 After a breakfast – more coffee and croissants – the junks started their engines and we gently chugged towards Vung Vieng Fishing Village. We transferred in twos to sampans, each rowed by a village resident. They were very petite but incredibly strong women. That 40 minute row was no mean feat and I take my Non La hat off to them. 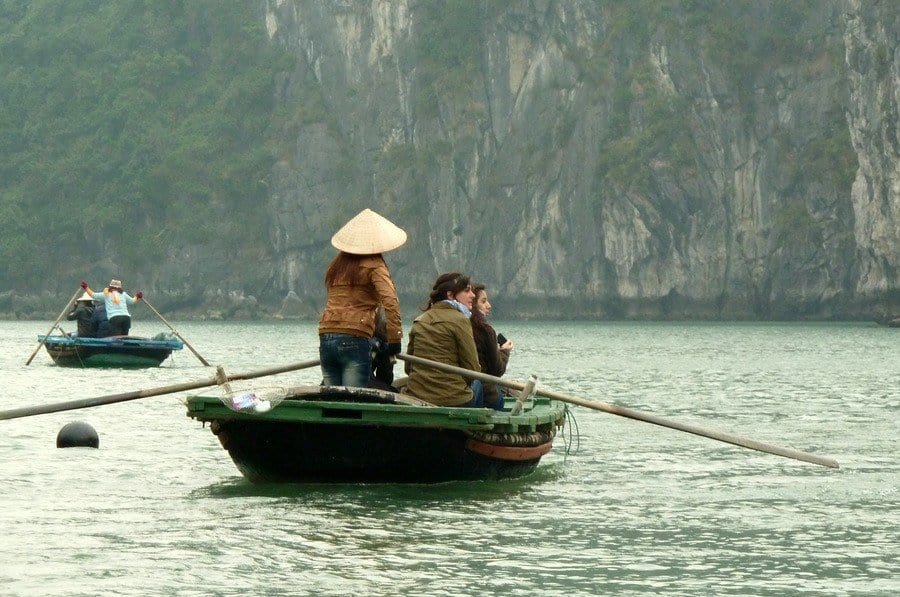 As we neared the village we saw small, brightly painted, wooden houses built on rafts and buoyed up with large, blue floats. Some had balconies and wooden porches planted with herb gardens. Washing was hung out to dry and children played, just like any other neighbourhood. It surprised me to see not just dogs but many cats around the village.  I suppose it figures – there’s a lot of fish around! 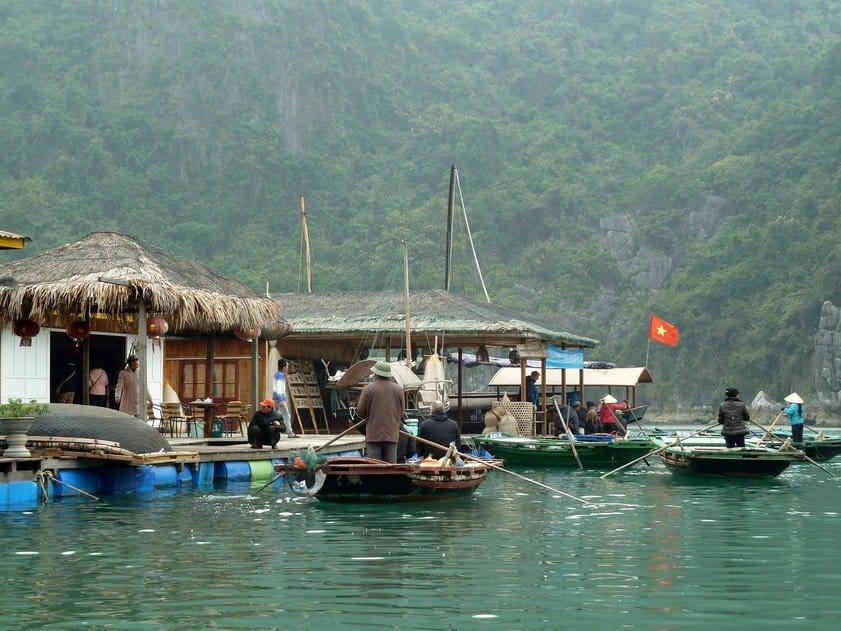 Vietnamese flags fluttered in the breeze as the villagers rowed from house to house, prepared food or fished. A small school housed tables, chairs and a blackboard – no children though, maybe it was lunch-time.

Members of this small community survive by fishing and cultivating fish and pearls; some are sold to passing junks, tourists and, of course, the mainland.  The villages are becoming smaller as the younger people leave to work in the city and I wonder how much longer these communities will survive. 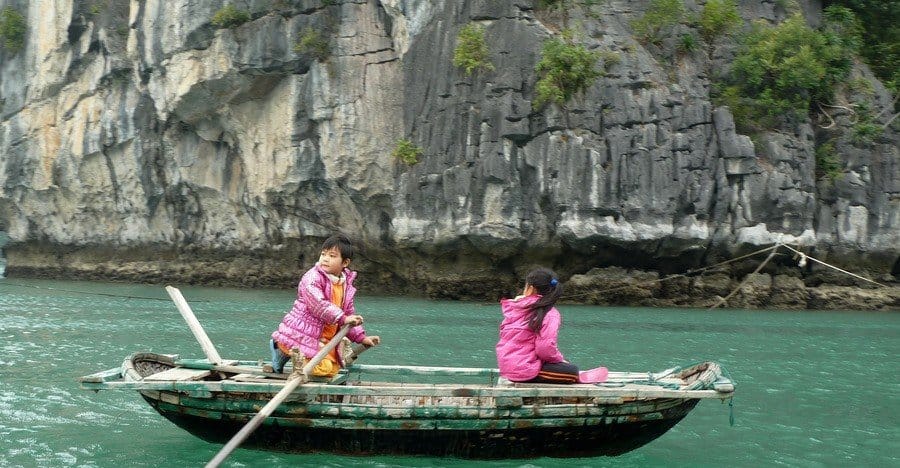 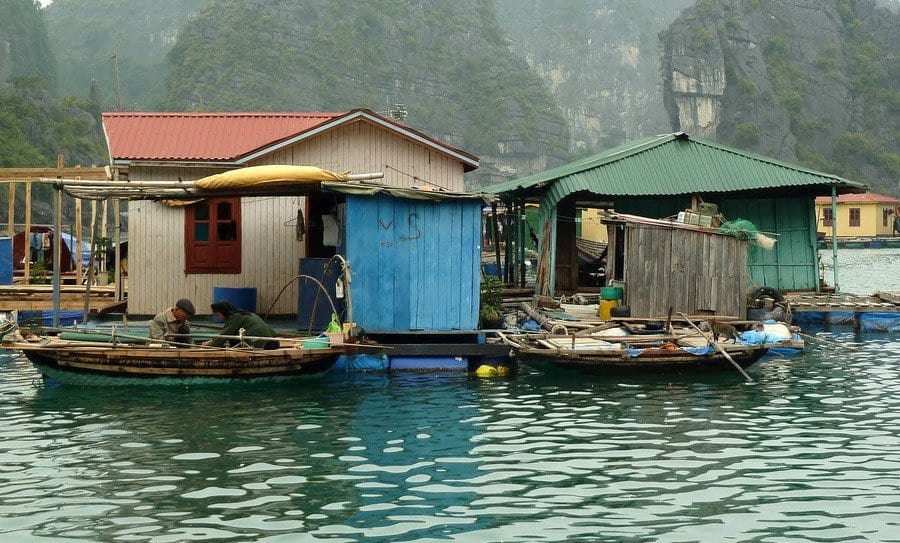 After the visit to the village it was time to head back to the junk and then to shore. As we slipped back through the mystical landscape towards land we soaked up the last of the scenery trying to gather memories to last a lifetime. As I looked back the karsts seemed to continue into infinity, shrouded in mist whilst the dragons undulated through the deep, still waters. A different world to the busy Hanoi we were returning to.

I recommend the indochina-junk.com experience. The cost is US $175 per person for the 2-day, one night cruise with lunch, dinner, breakfast, lunch and transfers to and from Hanoi. You’ll get a first class, and more importantly, safe experience.

You’ll visit the quieter parts of the bay and avoid the noisy, fume-filled flotillas that descend on the waters nearest to the port – over 400 boats daily. There are bargains to be found, of course, but at what cost?  Indochina Junk, has developed a sustainable business associated with environment protection, to help the families who live in the Bay.

In co-ordination with the Halong Bay Management Board, they have developed a programme ‘For a Green Halong Bay’ ensuring that rubbish does not contaminate the bay surrounding the Vung Vieng fishing village.  They have also helped set up a school for the village and are involved in community tourism; employing locals to provide job opportunities instead of just using the area without compensating.

We have visited Halong before but our first trip was a different story. It was planned as above but cancelled due to a typhoon. We took the 3 hour journey anyway from Hanoi and peered listlessly from the deserted, windswept beach at the few outcrops near to shore that were vaguely visible through the mists.  The next day we were able to go out for half a day boat trip along with hundreds of other vessels.

It was so busy we had to climb over 3 boats to reach our own and the smell of diesel stays with me still. The queues into the caves moved at a snail’s pace and once inside we could barely move it was so crowded. Very much a tourist trap and an entirely different experience to the one above.

TIP: Typhoons are a regular occurrence in the summer season (May to October) they arrive, blow some and go again all in a day but the authorities will not let any boats out until the winds have passed. If you’re going to visit Ha Long Bay as part of your Vietnam itinerary don’t plan it the day before you move on. Give yourself time to re-schedule if typhoons hit.

So there you have it – two ways to experience Halong Bay – which would you choose…?