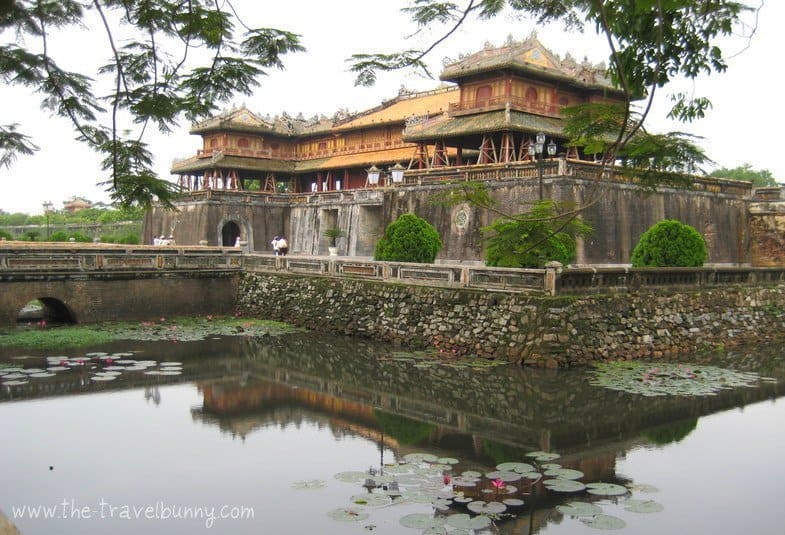 Hue, once home to Emperors, courtiers and concubines, is the place to discover the ancient heart and soul of Vietnam. Located at the mouth of the Perfume River, Hue was the imperial capital of Vietnam’s Nguyen dynasty between 1802 and 1945. We spent two days in the city visiting the Citadel and tomb-hopping our way down the Perfume River. 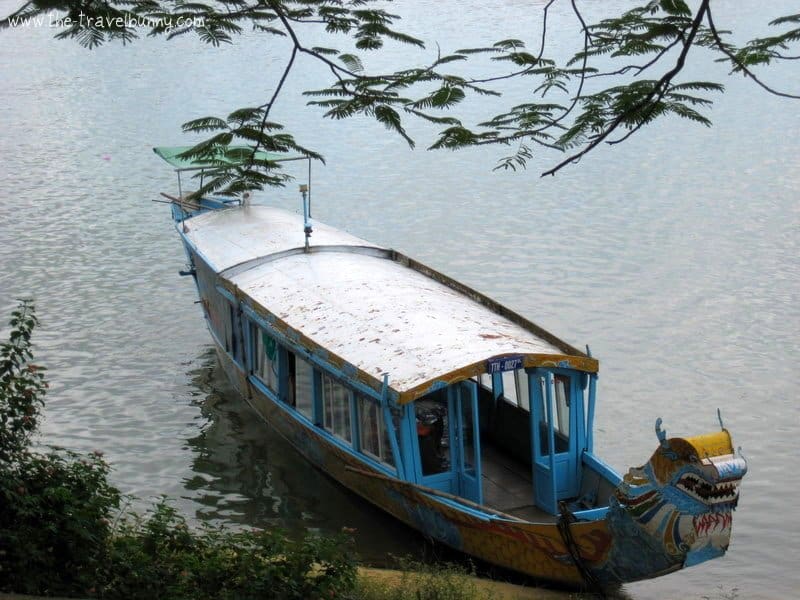 There are seven royal tombs scattered around Hue, individually designed – some by the intended occupant – some large, opulent and majestic, others which have fallen into disrepair. Here I’ll share with you two of the most ornate and therefore popular tombs.

Riverboat was our chosen method of transport and we headed for some colourful dragon boats moored a short walk from our hotel La Residence.   The first boat owner to spot us got the deal and we balanced up a flimsy plank; thank goodness Vietnamese food isn’t too fattening.  Our captain, his wife and two children welcomed us aboard and it quickly became clear that their mother had lost a leg from just above the knee – she mimed the cause, a motorcycle accident – one of thousands in Vietnam every year.  Mime was how we communicated throughout the journey. 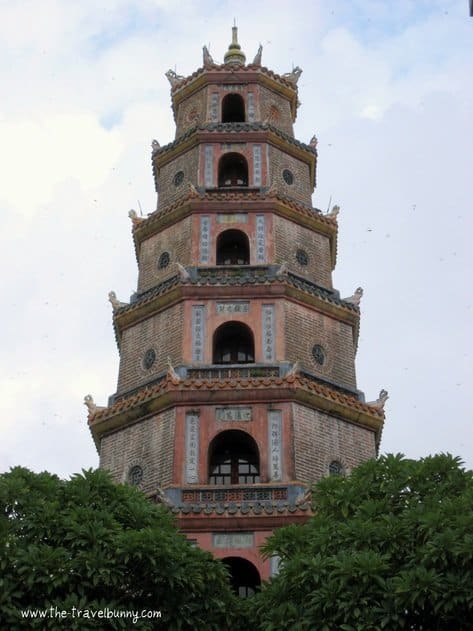 Our first stop was not a tomb but the ancient and beautiful Thien Mu Pagoda (Heavenly Lady) the official symbol of Hue and a ‘must-see’.  Steps led from the river directly to the seven storey octagonal tower, the tallest pagoda in Vietnam, as we climbed we became aware of a strange sound.  Bizarrely, thousands of dragon-fly swarmed around the pagoda the sound of their fluttering wings filling the air.

We explored a nearby pavilion, housing a giant stone turtle with engraved stele, a huge bronze bell, laughing Buddha and Disneyesque temple guardians.  I don’t have many photos as the camera battery died – a lesson learned there – nowadays I always travel with a spare.

The monks’ quarters are housed in well-tended gardens at the rear and here you can see the Austin car that Buddhist monk Thích Quảng Đức used for the drive to Saigon before he shockingly self-immolated in protest of the persecution of Buddhist monks by the South Vietnamese government.  This area is closed between 1130-1400.

Back up the bendy plank, I was mastering the technique by now, and we continued downstream until our host pointed out a small shack on the river bank.  Our next form of transport was ‘xe om’ – a pillion scooter ride, price dependant on haggling abilities (make sure the price includes your return journey). The Tomb of Tu Duc (entry VND55,000) is serene and beautiful, set amid terraced gardens at the foot of a valley of pine trees, the air thick with the scent of frangipani. 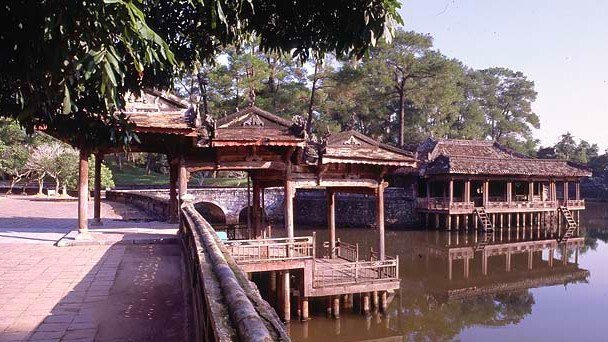 A lotus lake, stilted pavilions and birdsong make this a tranquil and beautiful stop.  We explored bridges, pavilions and carved terraces under the watch of stony-faced Mandarin warriors – built intentionally shorter than the emperor who now rests there.  The tomb area consists of a courtyard and the Stele Pavilion. The stele, a huge block of stone is inscribed with the emperor’s own words.  Unusually, Tu Duc told it like it was recording not only his achievements, as was usual in the tombs, but also his blunders.

Tu Duc wasn’t laid to rest in the mausoleum for fear of grave-robbers – his final resting place within the complex is unknown. Whilst we pondered his actual whereabouts we were caught out by a torrential downpour and got completely drenched.  The fact that we couldn’t have got any wetter didn’t stop some locals popping out from behind trees trying to sell us umbrellas and macs!

Hue is one of the wettest areas of Vietnam – pack a waterproof you’ll need it – especially September to March.   After stopping at a small stall to buy some drinks and enduring much giggling by the stall’s family about our sogginess we got our xe om back to the boat.  The sun re-appeared and we steamed nicely in its warmth as we dried out on our return journey. 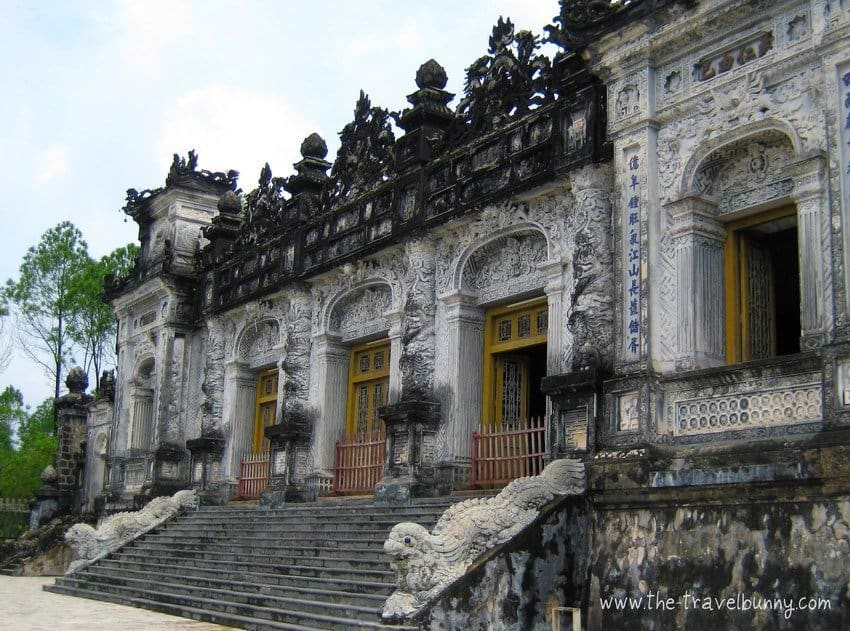 Next day, after a morning visit to the Citadel (blog post coming) we had time for one last cheeky tomb visit; this time to Khai Dinh’s tomb on the slope of Chau Chu mountain. This was a bit further out-of-town so we took a taxi that waited for us before returning us to the city.  We climbed up 100 dragon-flanked steps to a platform of life-sized stone elephants, horses and Mandarin warriors. 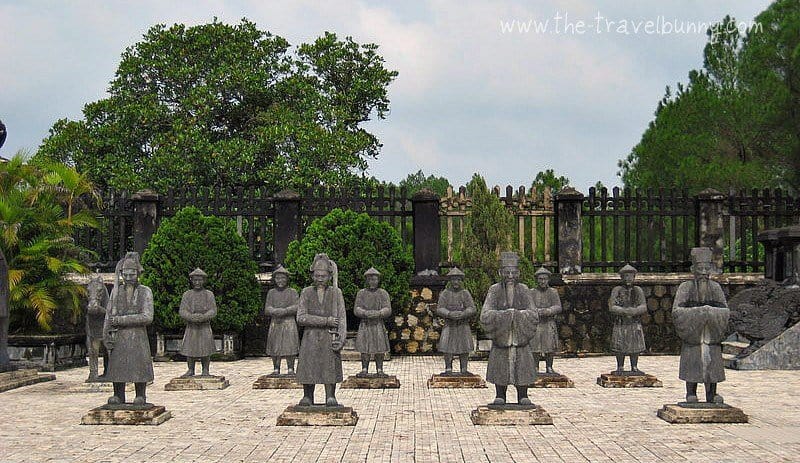 Up two more flights of steps is a museum containing some of Khai Dinh’s possessions and two statues and photographs – he died in 1925. The concrete mausoleum looks fairly uninspiring from the outside but has a surprisingly ornate interior. Colourful tiles, mosaics, ceramics and glass line the walls and the ceiling is painted with flamboyant dragons. The view from the top-tier out across the hills and over the tree-canopy is breathtaking. 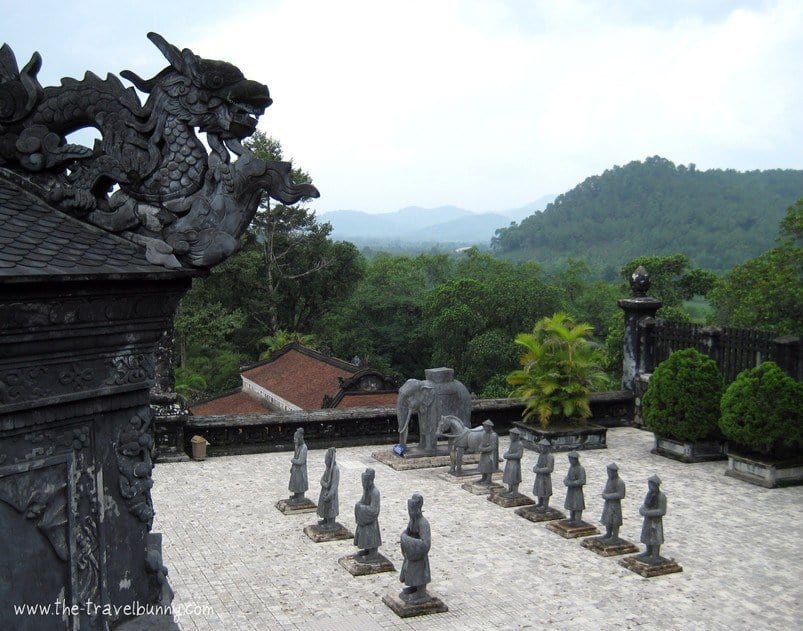 We returned to the city and the mêlée; roads full of droning scooters and schoolgirls cycling home, their white Ao Dais (national costume) flowing in the breeze behind them.  This really summed up Hue for me – a complete contrast of old and new, calmness and commotion; unlike any other city we visited in Vietnam.  Beautiful, serene countryside is interspersed with elaborate tombs, and pagodas all presided over by The Citadel with its cultural history presenting a poignant sense of what Vietnam was once all about. 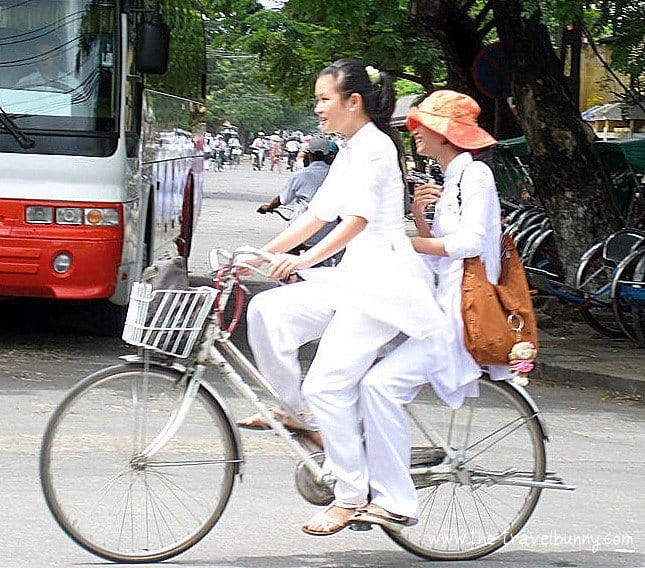 Where to stay in Hue

Getting around in Hue

Many sights in Hue are within a relatively small area.  Renting bicycles is a cheap and easy way to get around.

Hue would fit into your itinerary either before or after a visit to Hoi An.

By Air – Flights into Hue arrive from Hanoi or HCMC.

By Road (recommended) – The three-hour trip south to Hoi An from Hue through the Hai Van Pass has to be one of the most scenic trips in SE Asia passing through lush rice fields before travelling up through the hills until you reach the pass and then descend into Danang.  Renting a car with driver is quite inexpensive and can usually be booked through a local travel agent – although do shop around.

Amazing pictures. I really liked Hue, but didn't capture it as well as you! Unfortuantely I had a lot of rain and was still learning how to use my camera haha!

Sympathise about the camera batteries, hon. I've done that too- tragedy! Love what you've taken though. It's my dream to make the far east one day and you keep fuelling the desire.

There's so much to love in SE Asia - I do hope you make it out there some day soon. I'll try to keep stoking!

It is lovely and so different from the other cities we visited in Vietnam - thank you :)