There’s so much to see and do in Porto that you could easily spend weeks exploring the city and surrounding Douro Valley and vineyards. But, if you’re there on a long weekend or city break you’ll want to know what the top Porto sights are that you shouldn’t miss. Here’s my top ten list of what to see and do in Porto, Portugal’s second city and UNESCO World Heritage site. 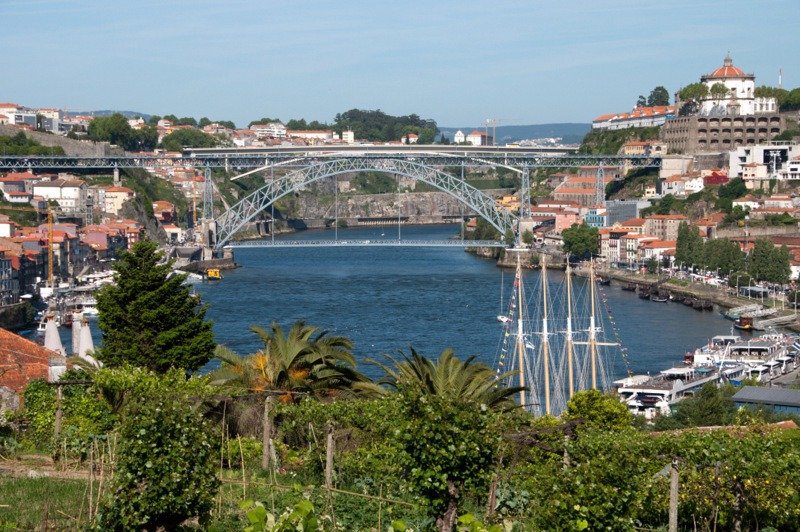 View of the Douro from Graham’s Terrace

1. Take a stroll along the Ribeira

The pretty cobbled Ribeira will draw you like a magnet and a walk along it is probably the first thing you’ll do as soon as you arrive in Porto. Check out Praça da Ribeira, the square by the river filled with cafés, bars and restaurants. Mosey around the market stalls and then walk along the small pathway that edges the river to take in the views of the Douro River.  Stop for a glass of Port as the sun goes down and count how many Port Cellars you can spot across the river. 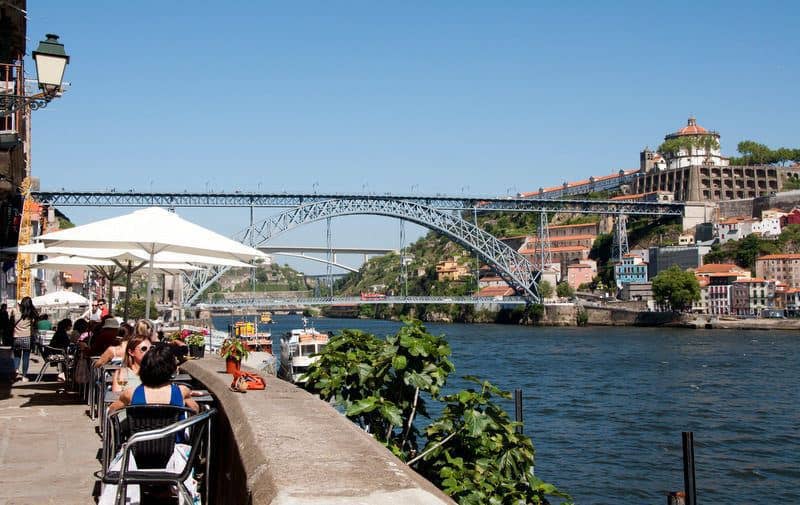 2. Buy a book at Lello Bookstore

This book store is one of the oldest in Portugal and it’s probably the most beautiful. Built in 1906 there’s a voluptuous red staircase dominating the centre with Art Nouveau carved-wood panelling and balustrades. A gem-coloured stained-glass window in the ceiling casts swathes of rainbow light across the books. Maybe pick up a copy of Harry Potter as it’s said JK Rowling wrote in the coffee shop here whilst teaching in the city. 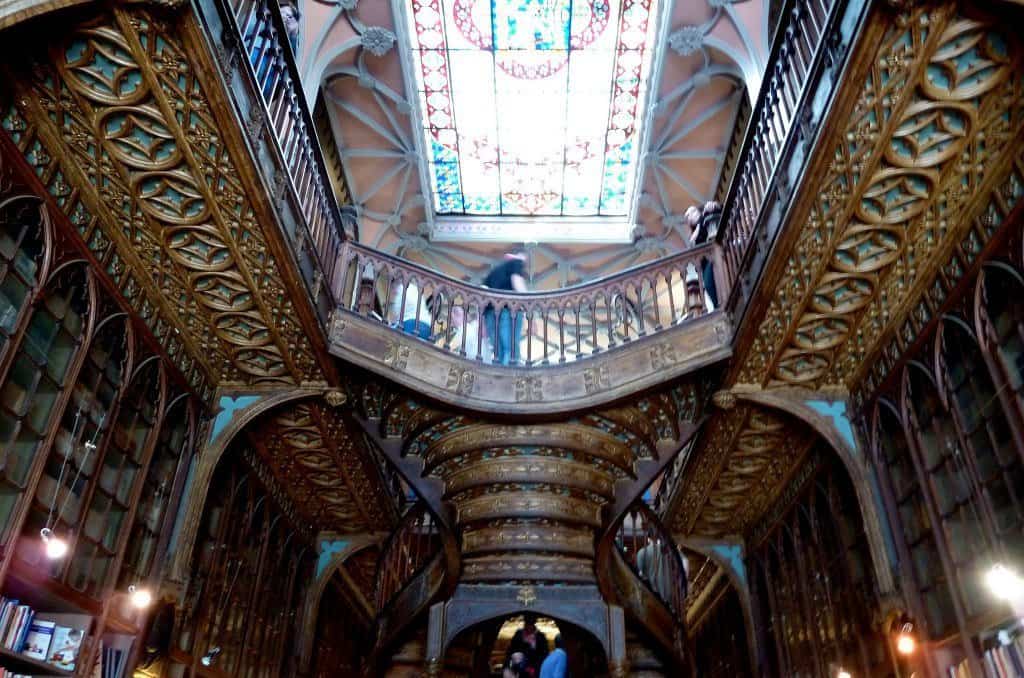 This beautiful baroque church has an 18th-century bell tower that pierces the Porto skyline. The landmark can be seen from across the city and its the perfect place to take in the views from 75m above.  If you can hack the 225 steps you’ll be rewarded with stunning views of the terracotta rooftops of Porto, the Douro River and the port cellars at Vila Nova de Gaio. 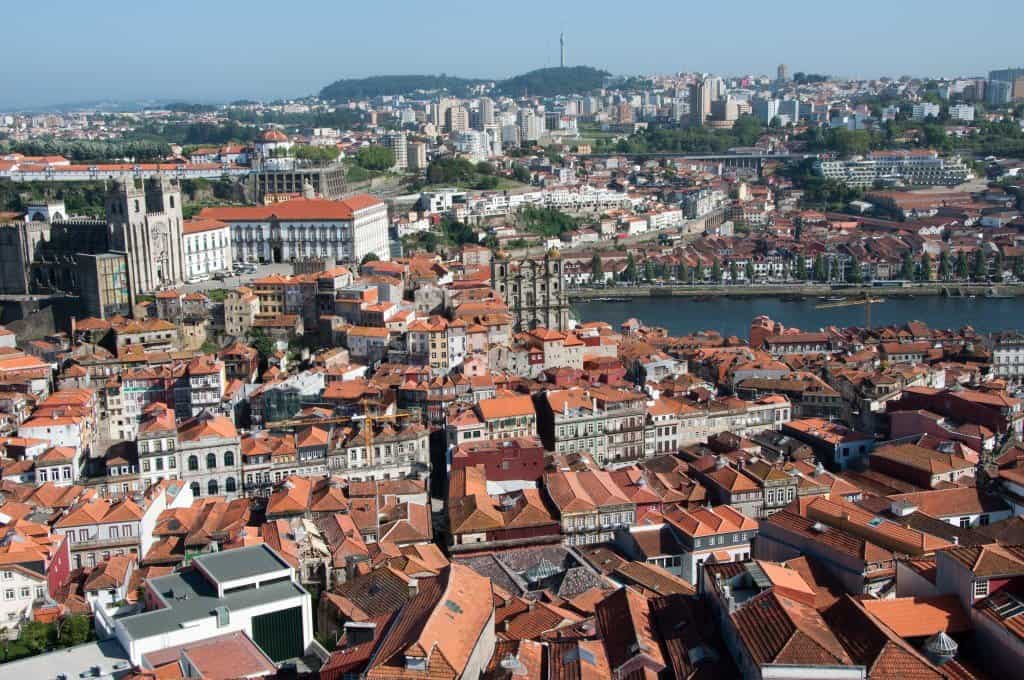 View of Porto from Clergios Tower

4. Have a coffee at Cafe Majestic 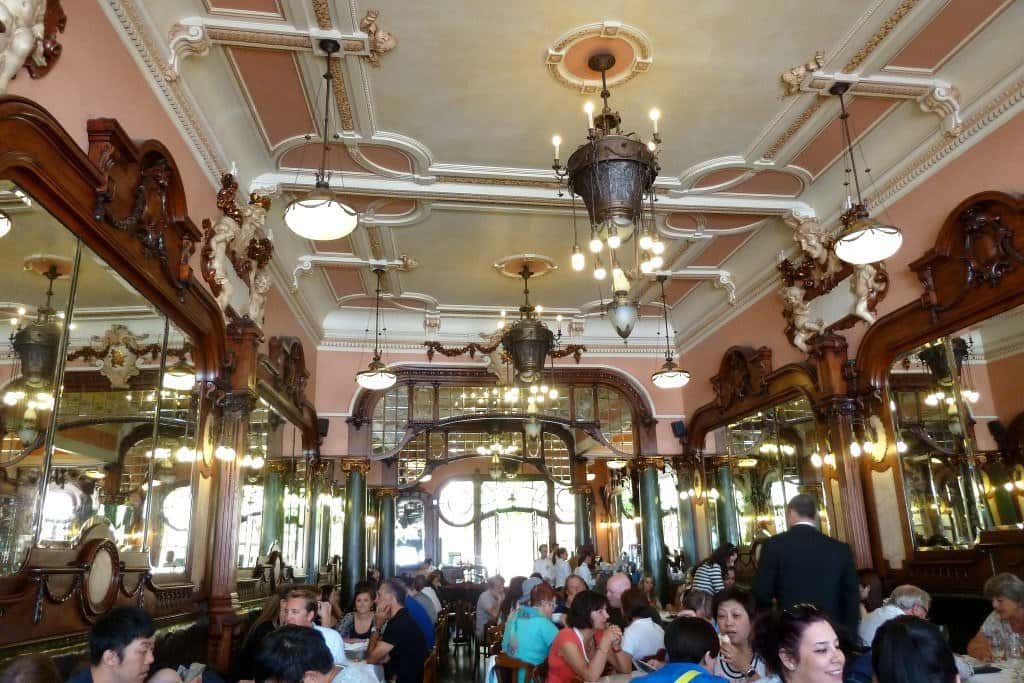 The Cafe Majestic is one of the most beautiful cafés in the world. Once the meeting place of the local elite, artists and intellectuals it’s only fitting that you pop in for a coffee and a Pasteis de Nata. The café, founded in 1921, is Art Nouveau with an aura of La Belle Epoque. Majestic by name and majestic it truly is with carved wooden framed mirrors, cherubs, chandeliers and gilding on the ceilings. The waiters dressed 20’s style in short white jackets and bow ties complete the ambience.

Probably the most beautiful railway station in the world and the most famous tiled building in Porto is São Bento Railway Station. Over 20 thousand azulejo tiles covering the walls of the old station illustrate the history of Portugal painted by Jorge Colaço, the most important azulejo painter of the time from. There are azulejo tiles all over the city but none with such fascinating scenarios and historical stories. Be careful – you could easily miss your train while engrossed in the station’s epic tile-work. 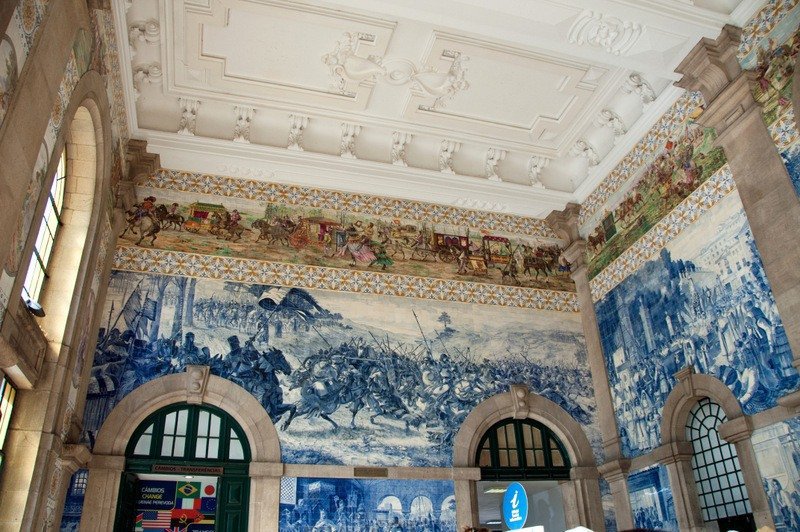 6. Discover the six bridges of Porto 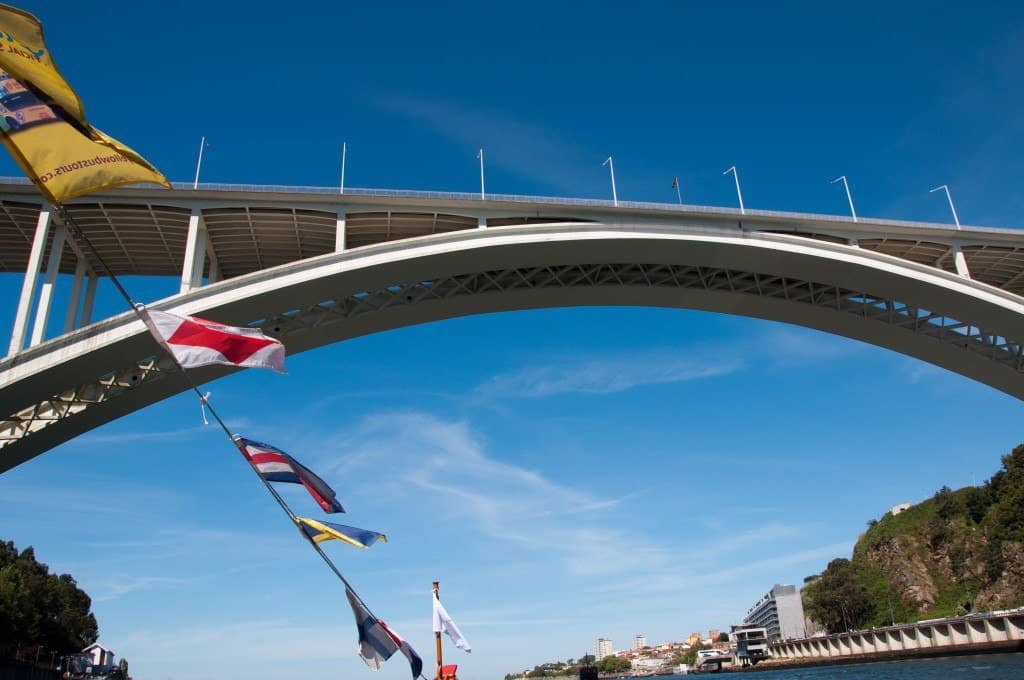 Did you know that Porto has six bridges? In fact it has more bridges than any other city in Europe other than Vila Nova de Gaia which you’ll reach when crossing Porto’s six bridges. The best way to see all of them is to take a river boat cruise on the Douro River. The most well-known is the two-tiered Dom Luis 1 Bridge which sits closest to the Ribeira. The bridge was built by a student of Gustav Eiffel, but not by Eiffel himself. He was responsible for Maria Pia Bridge, the oldest in Porto, which sits down-river. Maria Pia is no longer in use but is so loved that Porto kept it. Both are beautiful bridges. You can discover the futuristic São João Bridge on the boat trip along with the other four bridges.

The trip takes about an hour and costs around €12. Boats leave from the Ribeira and there are a few to choose from with many time slots. 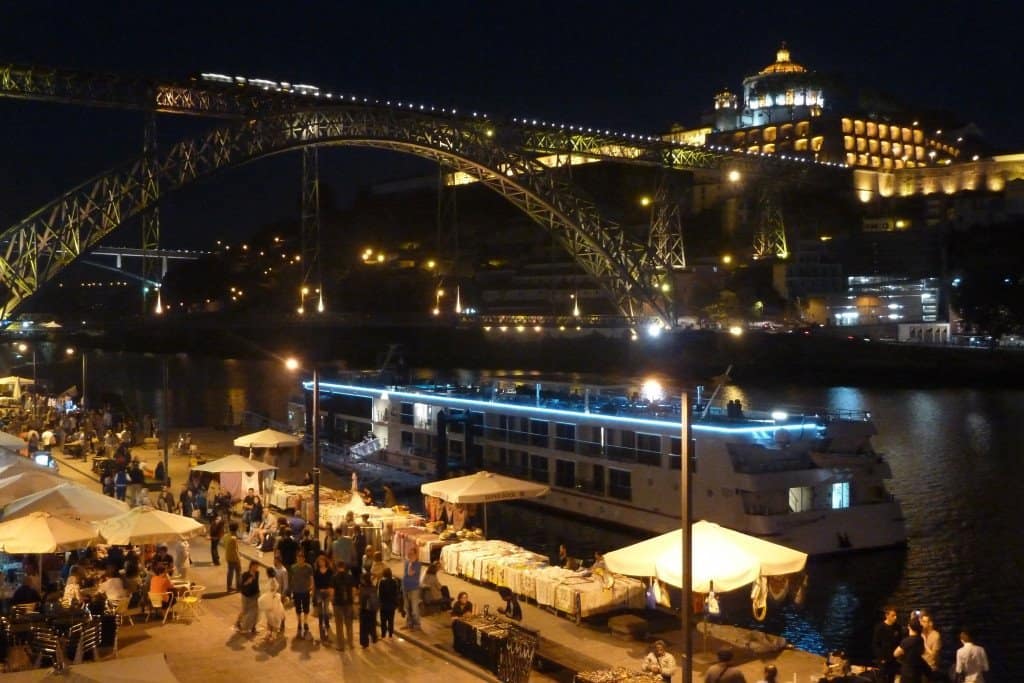 Porto is home to over 50 Port Wine Cellars. Wine is barrelled and brought to Vila Nova de Gaia which sits over the river from Porto. The Port is then aged in either small oak casks, large vats or in the bottles themselves. There are different types of Port; Ruby, Tawny, Reserve and Vintage. Learn about how it’s made, aged and tastes in a Port Wine tasting at any one of the Port Lodges. We chose Graham’s, as recommended by a friend, and they offered a variety of tastings at various prices. Some Port Lodges offer free tastings and others charge. Take your pick. Cheers! 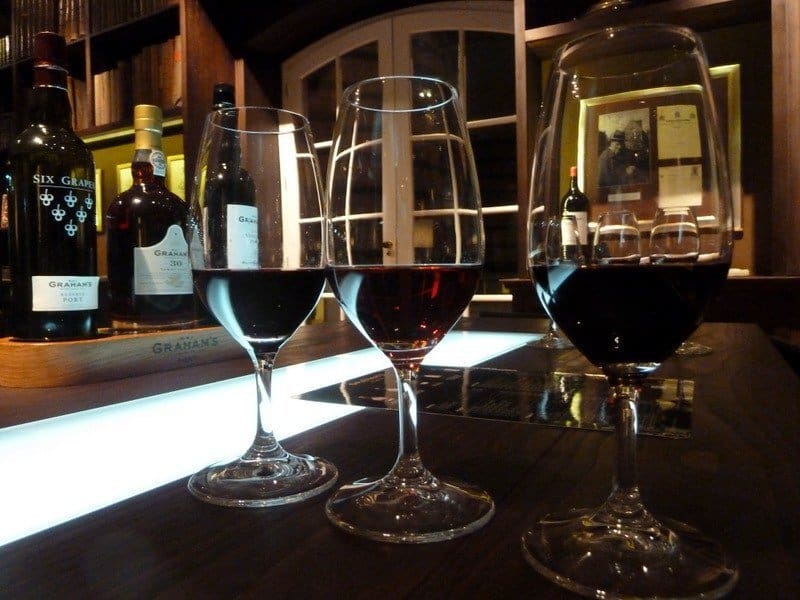 Our three glasses of Port Wine

In the heart of the city near to the Majestic Cafe you’ll find the Mercado do Bolhao, Porto’s covered food market. Colourful, noisy and full of life there’s no better way to delve into a destination and discover the delights of locally produced cheeses, breads, and Linguiça – a Portugese sausage.  Local farmers sell crates of freshly picked fruit and vegetables and as Porto is right on the Atlantic there are also stalls piled high with fresh fish and the little silver sardines which Porto is famous for. 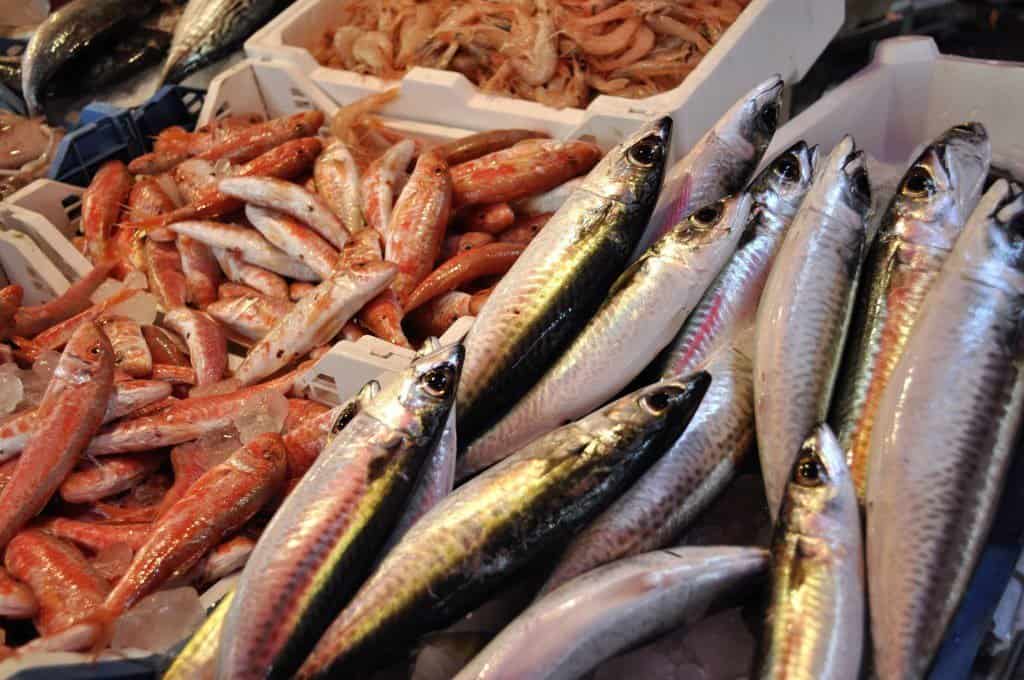 Fish at Mercado do Bolhao

Hop on board one of Porto’s 100 year old vintage trams. For €2.50 each way (or €8 for 24 hours) you can trundle around the city in one of the old brown trams to your heart’s content. On tram number 1 from Infante you can follow along the northern bank of the Douro and spend some time on the beach at Foz.  Hop on tram 22 at Rua Sa da Bandeira if you’d like to take in the most beautiful sights of the city centre. 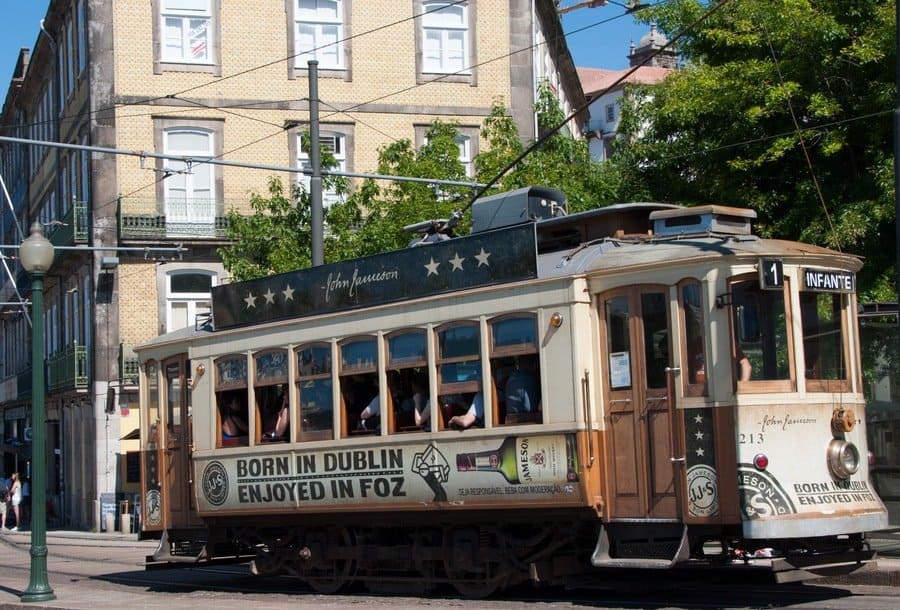 Finally, get yourself to the top-tier of Dom Luis 1 Bridge. Go stand in the centre and look down the Douro river towards The Atlantic and soak up the stunning views. Porto to your right, Vila Nova de Gaia and the Port Lodges to your left and the sparkling river as it turns the bend and heads on its way out towards the Atlantic.

Where to stay in Porto?

We stayed at the 4**** Carris Porto Ribeira Hotel located just a minute from the Ribeira in the historic district and within walking distance of lots of the city’s best sights. The hotel is a historic building renovated with hip modern features. Breakfast is served in the hotel restaurant and there’s free wifi throughout. I’d recommend this hotel and would stay there again. São Bento Station is just a 5-minute walk from Hotel Carris Porto Ribeira and Porto Airport is a 20-minute drive away. Check availability and rates 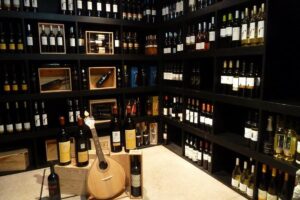 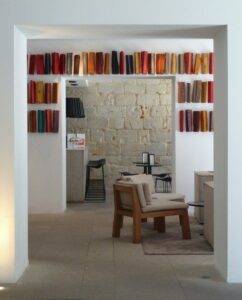 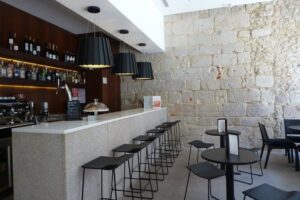 These are just some of the things to see and do in Porto but there’s so much more and I’ll definitely be heading back sometime.  Have you been to Porto? What are your top tips for a visit to the city? 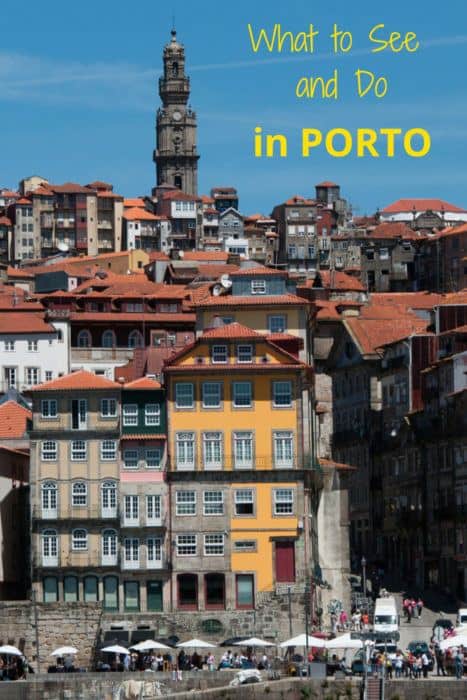 I loved your post, it really captures the spirit of Porto! I just come back a 3 day-trip to Porto, and I absolutely fell in love with the city, it so lively, and the food was amazing.

I posted an article on my blog about my favorite food finds in Porto, I thought you might like it :) ( http://www.pardonyourfrench.com/2016/06/days-in-porto/

Porto is one of my favourite European cities. Thanks Audrey I'll check out you post.

Great recommendations! I really need to make Porto a priority, especially after falling in love with Lisbon last year and wishing to go back to Portugal. The bookshop looks breathtaking and so does the panoramic view of the city.

Lots to see and do in Port (and Lisbon) and so easy to get to Porto from Lisbon by train. I hope to re-visit Porto next year :)

Nice post, Suzanne! Now my desire to go to Porto is even stronger. I have been to Lisbon this June but some people said that Porto is even better. Don't know how it is possible as Lisbon seems incredible for me. So I should visit and check it :)

I actually preferred Porto for a weekend break but you could easily combine the two and spend a week. Or more!

Cracking photos! I love a good view from a tall building whenever I'm in a city, and the view from the Torre Clerigos is one of the best I've ever enjoyed.

That view was so worth climbing all those stairs to get there!

Definitely saving this post! Everything you mentioned is something I like to do in a city... especially the views and the wine :D I have to visit Porto soon!

Such a great place for a weekend break and it's compact so not too far to go to see everything :)