A culinary journey in Südsteiermark brings exquisite wine, authentic Austrian food and traditional family-owned taverns with stunning views of luscious landscapes. All good reasons why food and wine lovers will be tempted to tread the South Styria Wine Road.

Before my visit to Austria this year for the Propel Conference I’d never heard of  the city of Graz. I didn’t know South Styria or Südsteiermark, to give it its German name, even existed. After spending three days exploring gorgeous Graz we took the train to South Styria to discover some of the region’s culinary offerings. We sampled some superb wines and authentic Styrian food. I can kind of understand why the Austrians would like to keep this very special wine route to themselves. But, to be honest, it’s too good to keep under wraps…

Morillon is the Styrian name for Chardonnay and it pairs well with the local cold meats and cheeses. Maybe they enhance each other so well because they’re all nurtured in the same soil. The wines produced are mainly white; Sauvignon Blanc, Gelber Muskateller, Weissburgunder and Welschriesling. Although the excellent red Blauer Zweigelt went down well along with some good rosé and sparkling wines. Schilcher Frizzante rosé from Weingot Langmann hit the spot. 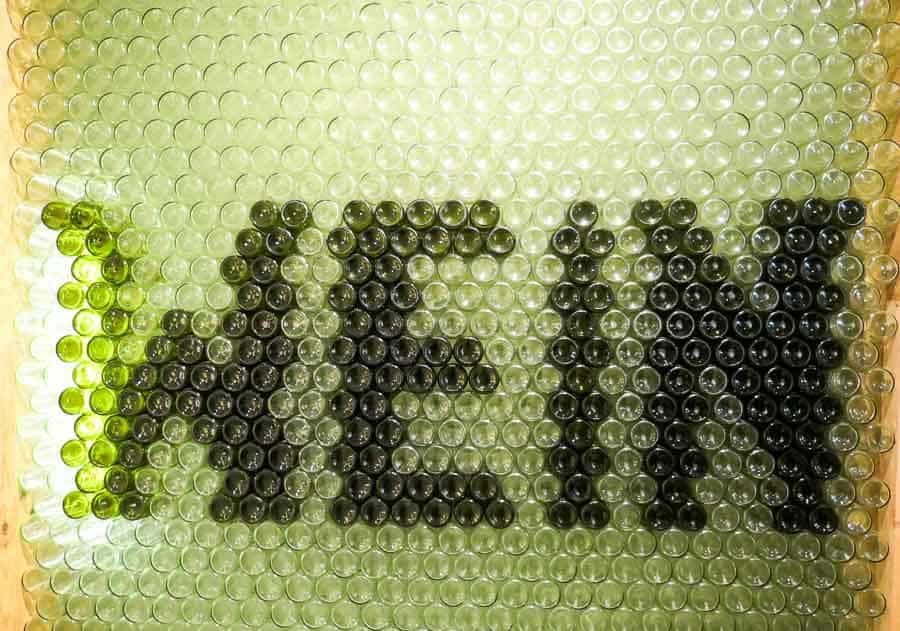 Food and wine highlights on the South Styrian Wine Road

Südsteiermark buschenschanks (traditional wine taverns) are a perfect way of getting an authentic taste of traditional life in Styria. Buschenschank, pronounced boosh-en-shank, is where the locals hang out and visitors go to get a taste of Styrian tradition.

Only cold food is served at a buschenschank. By law the owner/winemaker can only sell their own wines. No beer and no hot food or drinks can be sold. This means that winemakers can serve local produce to guests without having a restaurant licence. Buschenschank is a Südsteiermark classic and it works well.

For our first meal in Styria we called the free Gamlitz GAST Taxi who took us to Buschenschank Tinnauer, a few minute’s drive away. Like so many businesses in Styria Winery Tinnauer has been in the same family for generations. We were welcomed by Martin Tinnauer who showed us to our table on the terrace overlooking impossibly green hills and vineyards. 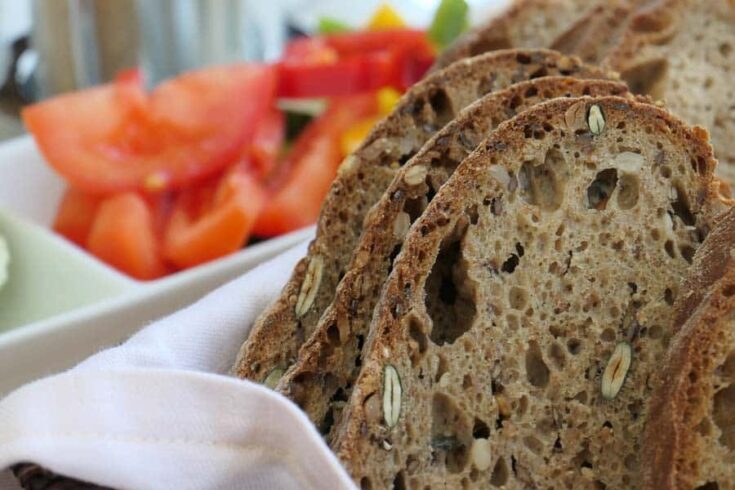 As we watched the sun slowly dip behind the vines the food started to arrive and it just kept on coming. Platters of cold meats, spicy sausages, freshly baked bread studded with pumpkin seeds and a variety of soft and hard cheeses filled up the table. Crisp salads, hard-boiled eggs, vegetable spreads and asparagus arrived. Then there was dessert! Rich ice cream, chocolate cake and fruit.

Just as well there are guest rooms at the winery because if I’d eaten any more I wouldn’t have been able to move. We finished off with a trio of feisty fruit liqueurs. All the food is either grown on the family’s farm or comes from farms within a few kilometres. The food is super fresh and full of flavour and completely embodies Styria’s farm to table ethos. 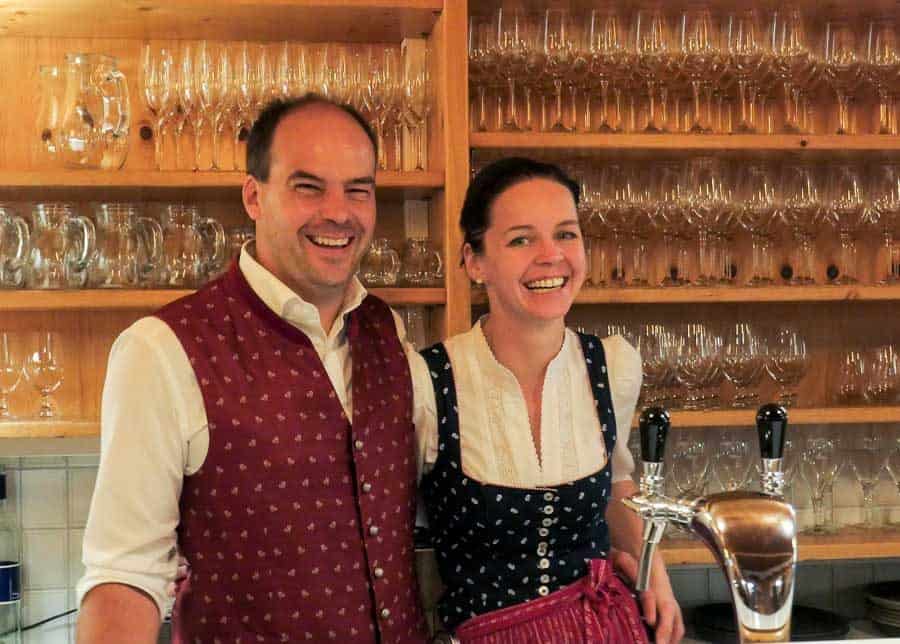 Our hosts, Martin and Claudia Tinnauer

Opening hours
Friday – Tuesday from 10 am, Thursday from 5 pm,
kitchen until 9.30 pm, closed on Wednesday

A perfect place to start your Styrian wine tasting is Kästenburg Winery in Ehrenhausen. The winery is one of the founding members of the wine route. Like many wineries in Styria Kästenburg has been in the family for many years. Six generations have been producing excellent wine since 1638.

Jakob Jakopé, the youngest of three siblings who help run the family business, introduced us to the Kästenburg wines with a sabrage flourish. A bottle of sparkling Chardonnay was opened with a swift upward strike with a sabre. The top of the bottle was sliced off with the cork still encased in the neck.

In the centuries old cellar, which was unlocked with a key as big as my hand and as old as the hills, we tasted some very good Pinot Noir, Sauvingnon Blanc and Zweigelt. One visit wasn’t enough and we returned in the evening for dinner in the winery’s rustic restaurant. 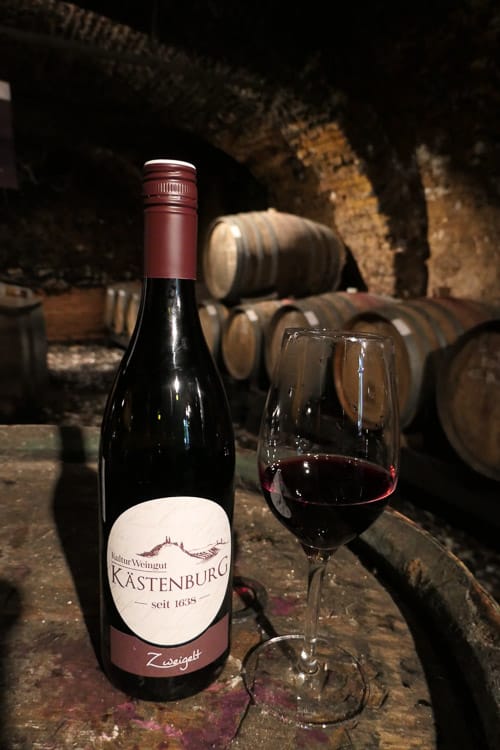 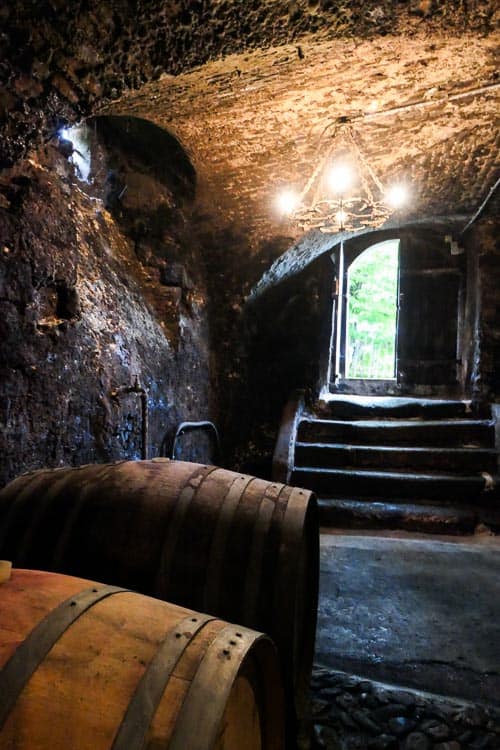 Food was excellent Austrian fare – seasonal and beautifully hand crafted using the freshest local ingredients. We started with a selection of breads, cold meats, pates, cheeses and pickles. The main course was Backhendl (more about that later) and savoury pancakes with roasted asparagus and homemade vinegar. Desserts were good too especially the ice cream drizzled with pumpkin oil and the apple tiramisu. Even the plates were homemade by Jakob’s mother Ilse.

I had no idea how big pumpkin seed oil is in Südsteiermark. The thick dark green oil has a slightly nutty buttery flavour and it’s oh so good. We tried Styrian pumpkin seeds in all manner of meals. Think pumpkin seeds baked into bread, covered in chocolate, pumpkin seed oil drizzled on everything from salad dishes to ice cream and, my favourite, pumpkin seed pesto. The pesto tasted so good that I brought some home but we got through it quickly and I’m now trying to source more. Definitely one I should have stockpiled.

Styrian pumpkin seed oil is said to be the best because of the unique variety of pumpkin grown in the region. There are around 14 oil producers in the area and we visited Resch Kernölpresse, who have been producing the oil since 1842.  Bern Resch, a 5th generation producer demonstrated how the oil is extracted. Although machinery is used it’s still quite labour intensive. 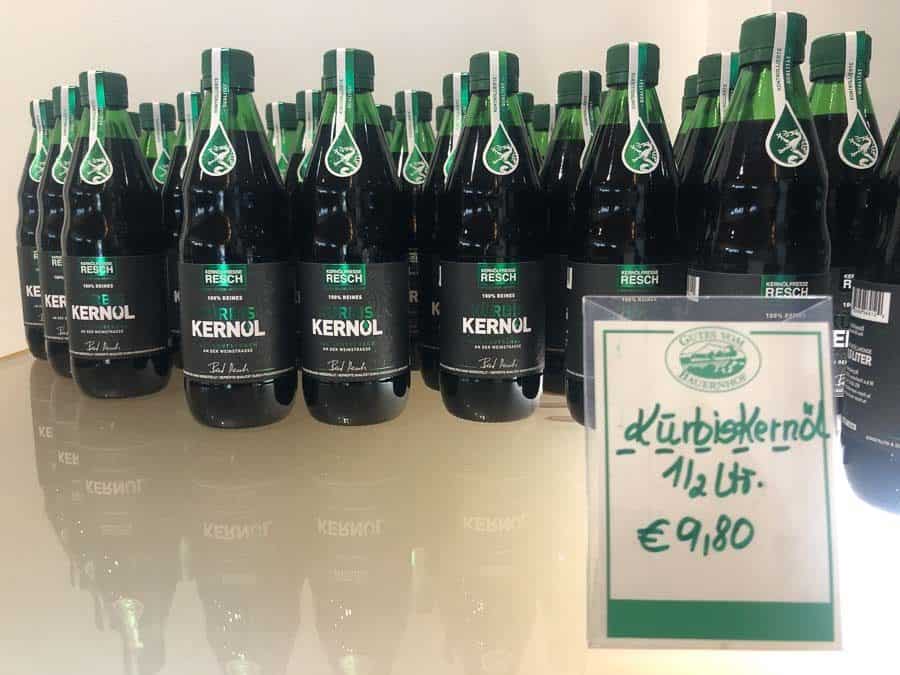 First the seeds are ground, mixed with salt and water and then heated to remove moisture and roasted to 180 degrees. The resulting mixture is then pressed and the oil collected and stood in vats for five days so any sediment can settle at the bottom. The bottled oil can be kept for up  to18 months at room temperature. The dried husk left over from pressing is fed to local livestock. Zero waste.

Ahh Backhendl. Be sure to try South Styrian speciality Backhendl when you visit Südsteiermark, This fried chicken dish isn’t just any old fried chicken dish. For one, chickens in Styria have a longer life than your average chicken.

Most chickens that land on our plates are slaughtered after only 4-5 weeks. Not in Styria. The chickens are lovingly fed and nurtured until they are 28-32 weeks old which makes for a happier chicken and a much tastier dish. The dense crisp crumb is seasoned with salt and pepper and the chicken is tasty and succulent. Simply served with a slice of lemon and a green salad you’ll not taste a better fried chicken dish than Backhendl.

The succulent dish below was served up to us at Hotel am Marktplatz in Gamlitz. 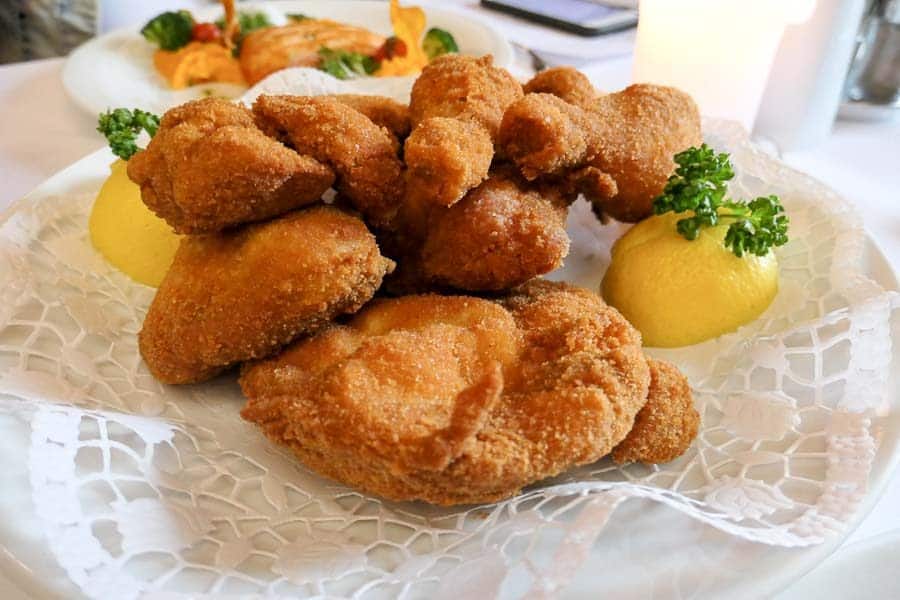 If you want to get a flavour of Styria all under one roof then head to Vinofaktur Genussregal.

Genussregal translates to “the shelf of pleasure” and inside you’ll find shelves laden with Styrian produce from wines, cheese, honey and meats to gin, chocolate, pumpkin seed oil and eggs. Chicken eggs are labelled to show exactly which farm they’ve come from. 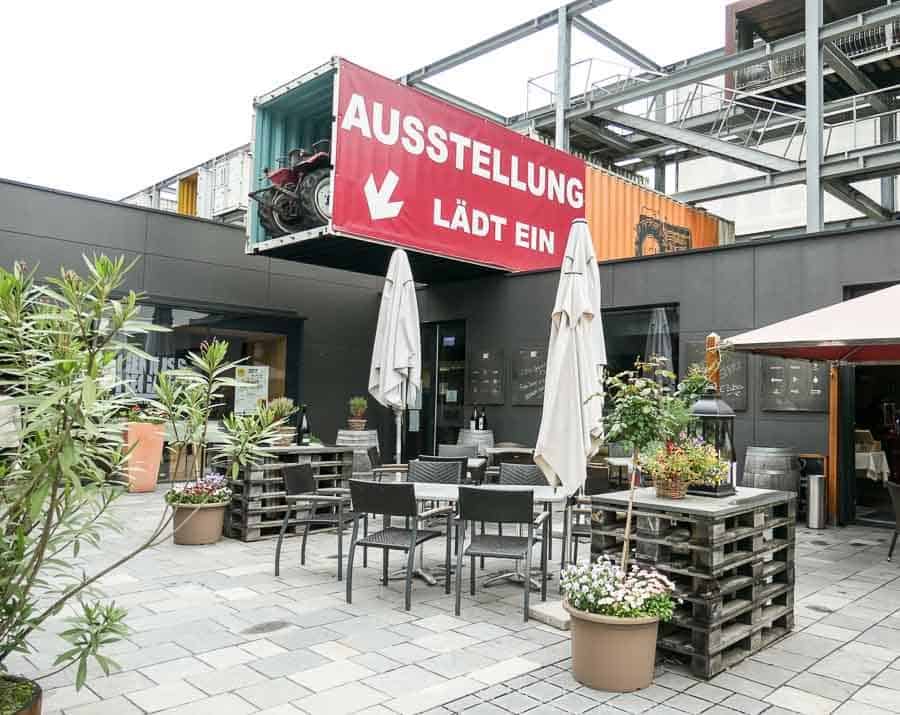 Over 1000 local wines are up for sale paired with an exhibition of regional products from over 250 local producers. The interactive exhibition shows how the slow food movement works in Styria by way of sampling stations, films and exhibits.

I learned here why Styrian ham tastes to sweet and tender. The pigs are only fed cereals because corn fed animals get too fatty. The pigs can choose for themselves whether they live inside or outdoors, they’re fed fresh eggs, listen to classical music and are petted daily. I can assure you that happy pigs make for a much tastier meat. Obviously it’s more expensive to produce ham this way but you can really taste the difference so worth a few extra euros.

It’s worth paying to take the tour where you’ll learn about the production of various local specialities and taste a selection of wines and produce. Use your own porcelain spoon to taste regional flavours like chocolate, pumpkin seed oil, vinegars and honey. Afterwards head to the counter to purchase your favourites. 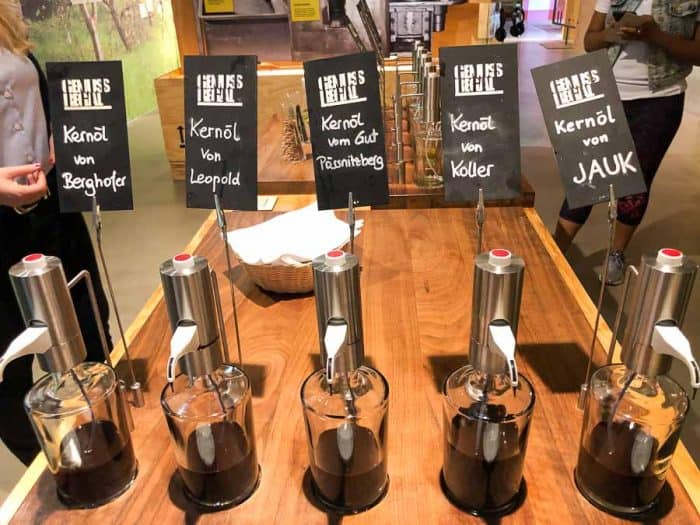 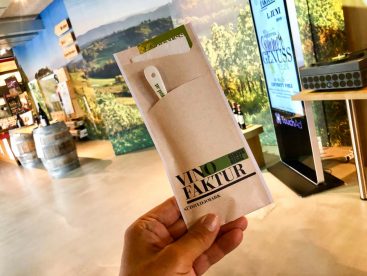 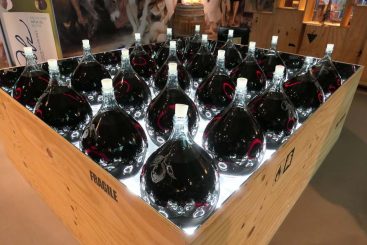 You could easily spend a few hours here finding the wines you really like before heading off to visit their respective vineyards for a more in-depth experience.

Keep an eye out for the ‘klapotetz’ which you’ll see standing in the vineyards. The big wooden windmills make a steady klonking noise to scare the birds away from the grapevines. Although they’re not used any more they remain as an unofficial mascot for the Styria region which I think is kind of nice. 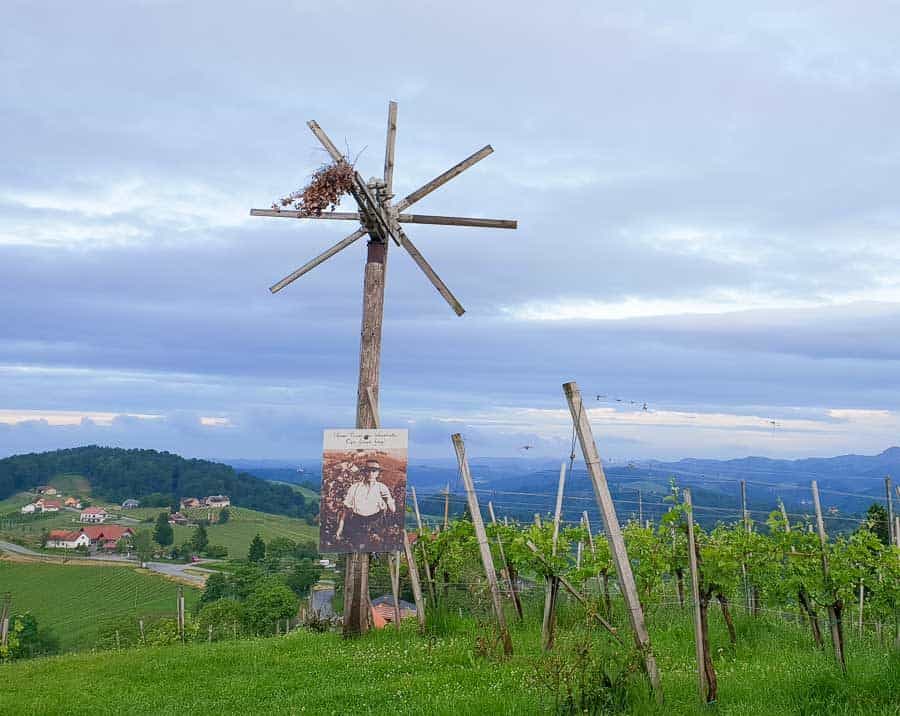 During our Styrian wine road trip we briefly crossed the border from Austria into neighbouring Slovenia. Seeing as we were exploring the ‘green heart of Austria’ it seem only right to visit Slovenia’s heart-shaped road. 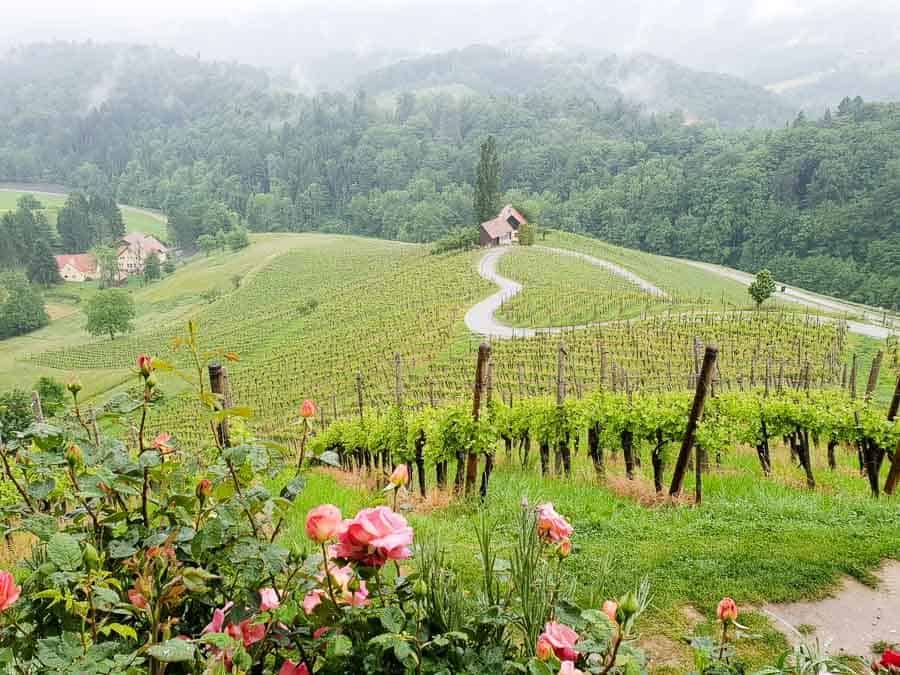 The road is visible from Dreisiebner Stammhaus in Špičnik where you can park up and take a short walk to the vineyard’s edge. The restaurant garden offers a perfect view of the famous heart-shaped road. If you’re not eating then they’re happy for you to take a few photos for 2 euro donation.

What to do in Graz, Austria – culture, quirk and cutting-edge design

Getting around South Styria – The Wine Taxi

You might be thinking how do I explore a wine road without driving? Obviously you’re going to want to sample all the amazing wines but if you’ve got to drive that’s not going to work. Fortunately, Südsteiermark has the perfect solution –WeinMobil aka the Wine Taxi, a local taxi service for visitors to the wine road.

If you’re staying in Gamlitz there’s a FREE taxi service for hotels, wineries, restaurants and other businesses participating in the GAST Taxi member service.

Where to stay in Styria Südsteiermark

We stayed at Hotel Restaurant Weinlandhof, in Gamlitz which was a good base for exploring the wine road. The rooms were a good size and had a small balcony. Breakfast was excellent with a huge choice of both cold buffet and cooked food.

A wellness area with pool, Jacuzzi and treatment rooms opens up onto beautiful gardens  which surround the hotel. 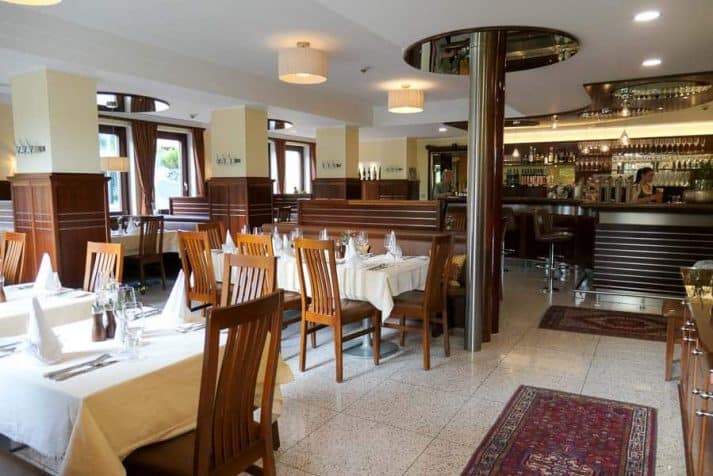 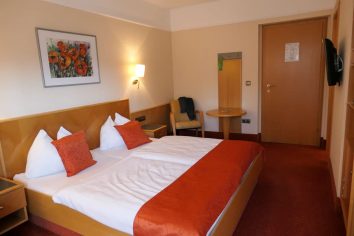 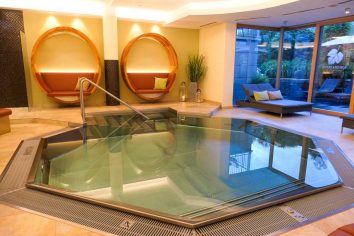 Where is the Styrian Wine Road

Austria’s oldest wine road in southern Styria is approximately 44-miles long. Check the Steirmark website and then scroll down for a South Styrian Wine Road map.

Styria, which is known or Südsteiermark lies in the south eastern corner of Austria. I’d recommend pairing a city break to Graz or Vienna with the South Styrian Wine Road.

It’s a 45-minute drive south from Graz or two hours from Vienna. A 40-minute train journey will take you from Graz to Leibnitz.

Styria is known as the ‘green heart of Austria’. The rolling green landscape along with its excellent wines, first-class food and friendly people definitely captured a little piece of my heart. 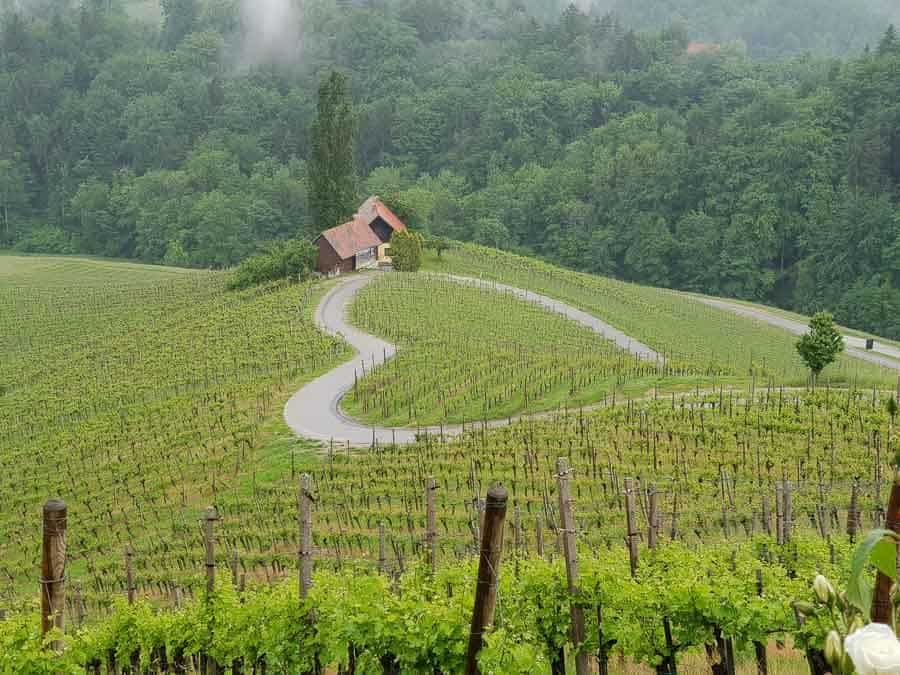 Thank you to Visit Südsteiermark and Propel Graz for hosting me on my visit to South Styria. As always all views, opinions and new love of pumpkin seed pesto are entirely my own. 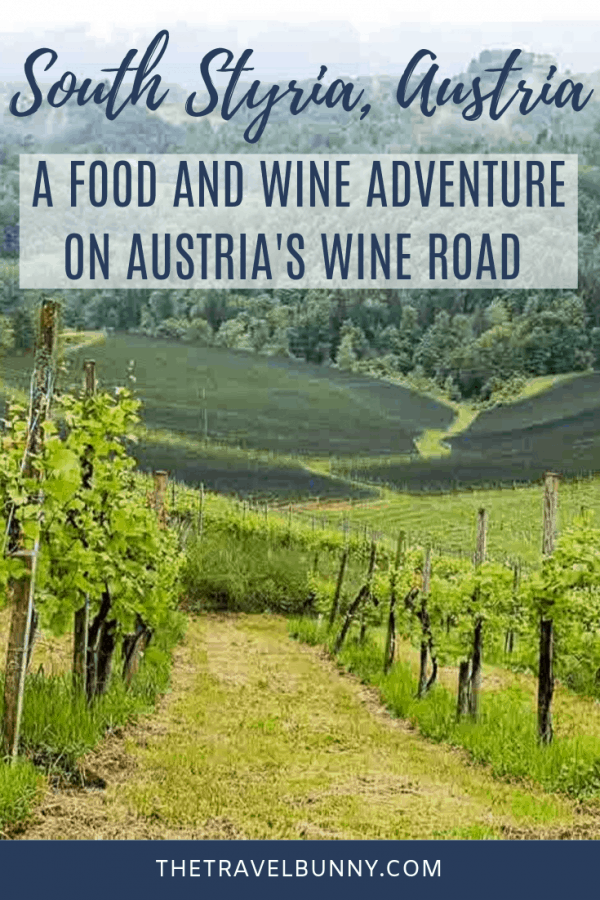 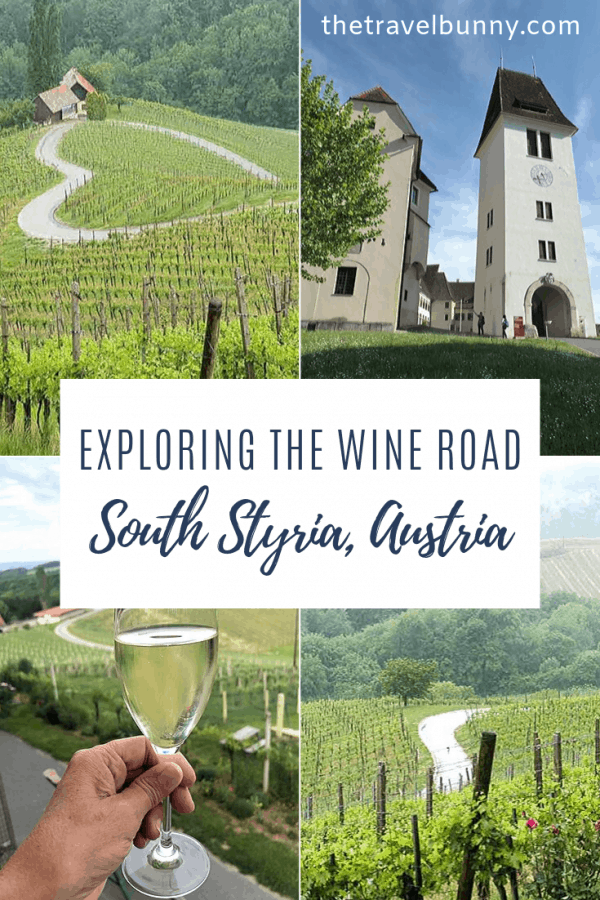