Filzmoos Balloon Week takes place each January in Filzmoos, Austria. This pretty Austrian village nestles in the “ski amadé” region of Salzburgerland.The village lies in a pine-clad valley at the base of the Bischofsmütze Mountain surrounded by a winter wonderland of wooden chalets, fir trees and sparkling alpine scenery.

Filzmoos has so much more to offer than skiing, snow-boarding and hiking. It’s also known as Austria’s Balloon Village. I went along to Filzmoos Balloon Festival to find out all about it. 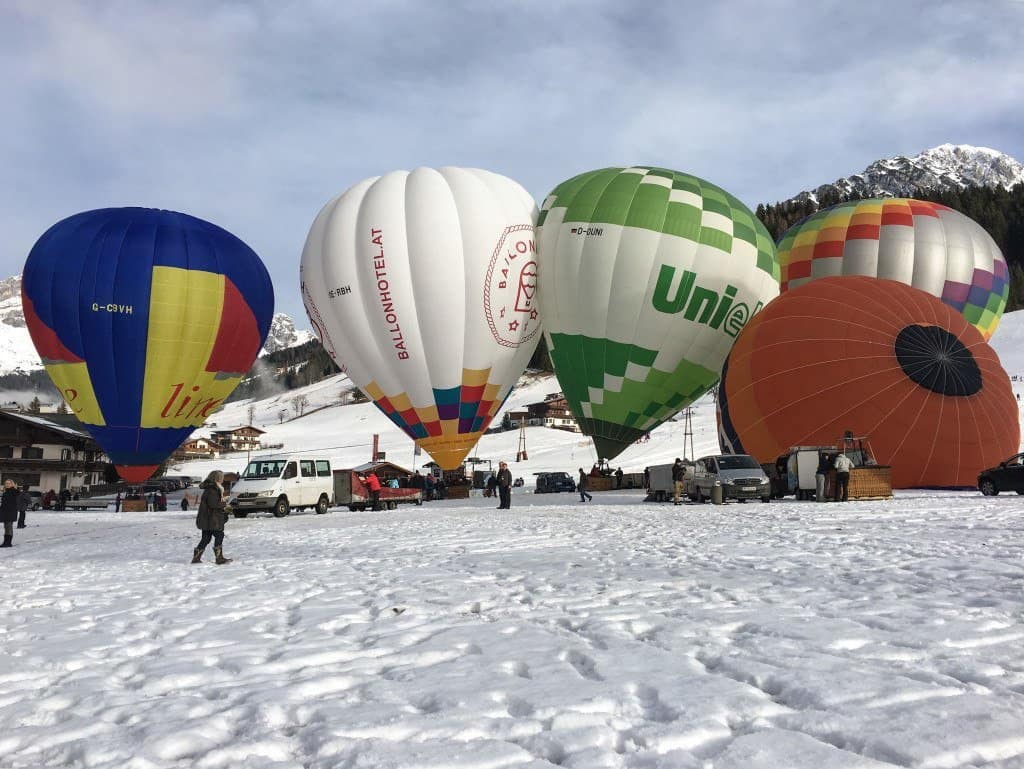 Every January in Filzmoos, Austria a multitude of brightly coloured hot-air balloons lift gently into the skies against a snowy backdrop of majestic mountains. Filzmoos Balloon Week takes place every January and I was in town with Inghams to check out the high-flying fun.

The hot air balloons launch from Hammerweise, a field a short walk from the village. The balloons arrive by truck and are inflated read for the race to start. We walked the ten minutes from our accommodation, the fabulous Hotel Alpenkrone Filzmoos, as the sun struggled to break through the misty alpine morning. 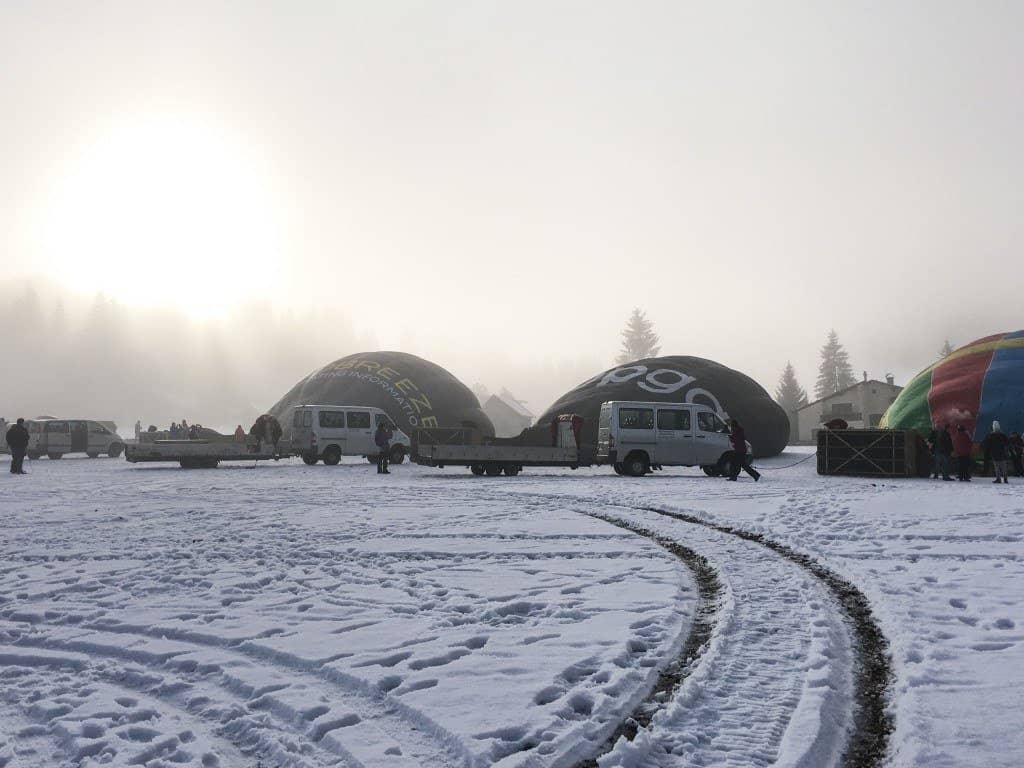 Every year around 30 hot air ballooning teams come to Filzmoos from all over the world to take part in the challenge. The unpacking of the balloons began and the huge colourful silks were laid out in the snow ready for unfurling and filling with gas.

We watched as sleds were used to haul chunky wicker baskets into place which were then attached to the balloons.

Huge fans began to inflate the billowing silks. Gas finishes the filling and vigorous noisy bursts accompanied bright shafts of flame. As the balloons became plump and rounded their colours and designs became clear and defined.

The trees were now obscured by balloons in various states of fullness as they jostled for space gradually growing bigger and bigger. Eager to leave they were kept from escaping too soon by tethers and ballast which kept them grounded.

Read More: What to pack for a ski trip (with free printable download) 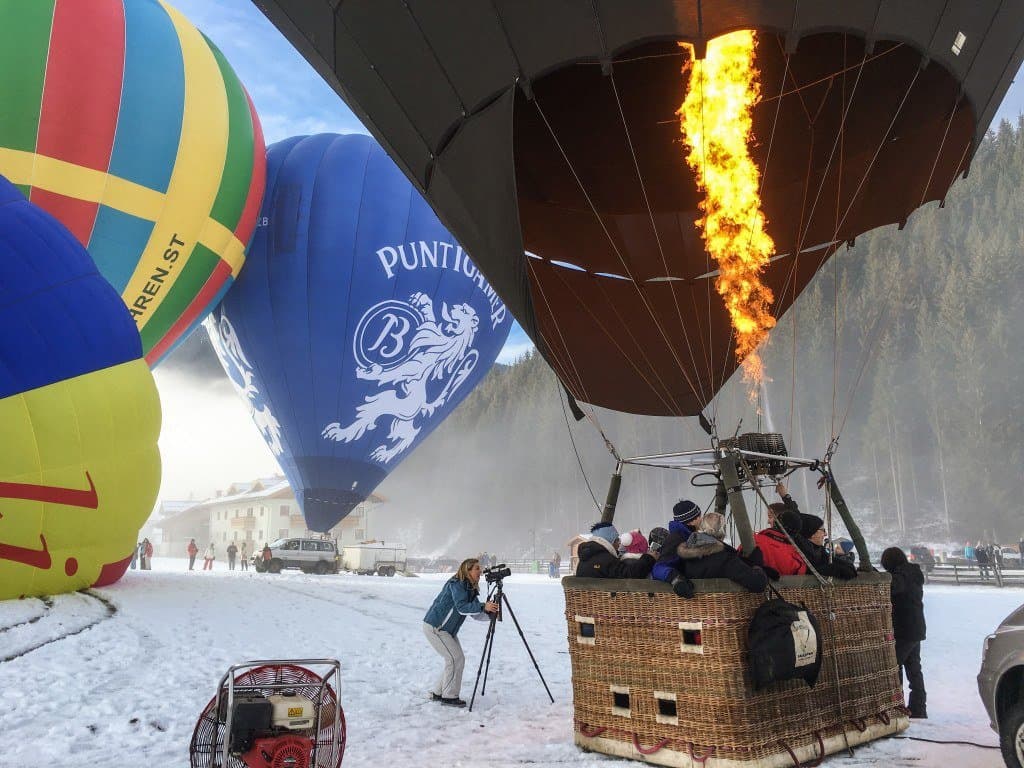 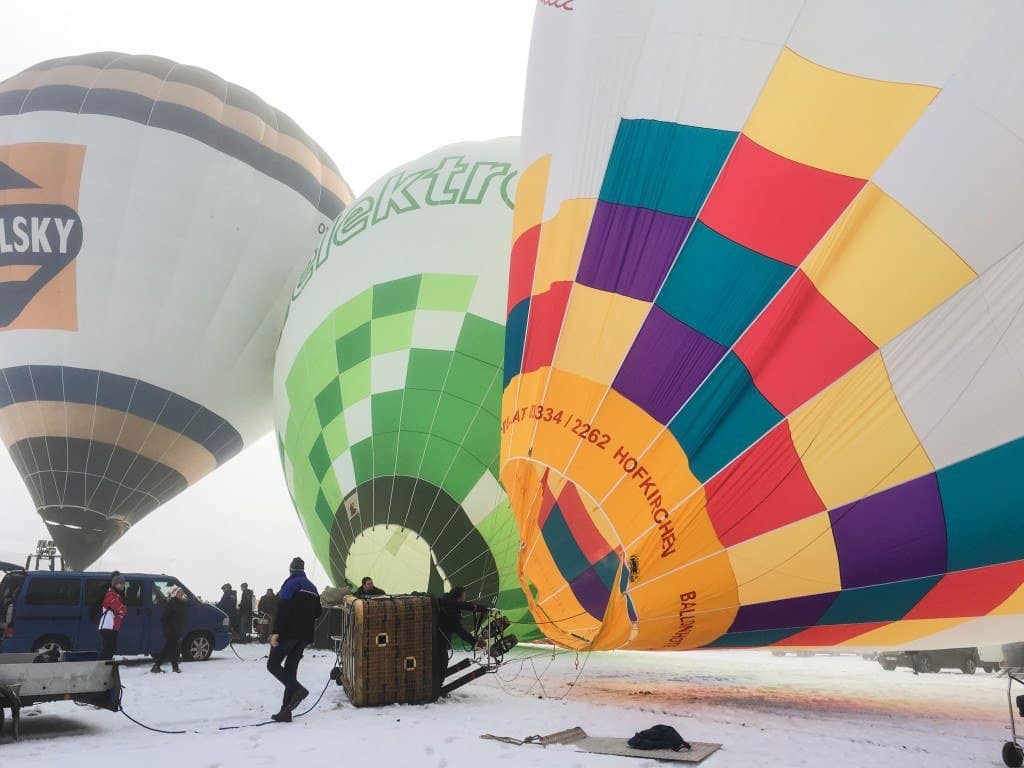 A flurry of activity surrounded each basket as people hurried to climb in ready for imminent take-off. Suddenly we were waving and craning our necks as the balloons lifted away.

The graceful orbs rose rapidly into the crisp, blue sky. The sun lit the coloured silks as one by one they grew smaller and eventually disappeared into the distance. The race had begun. 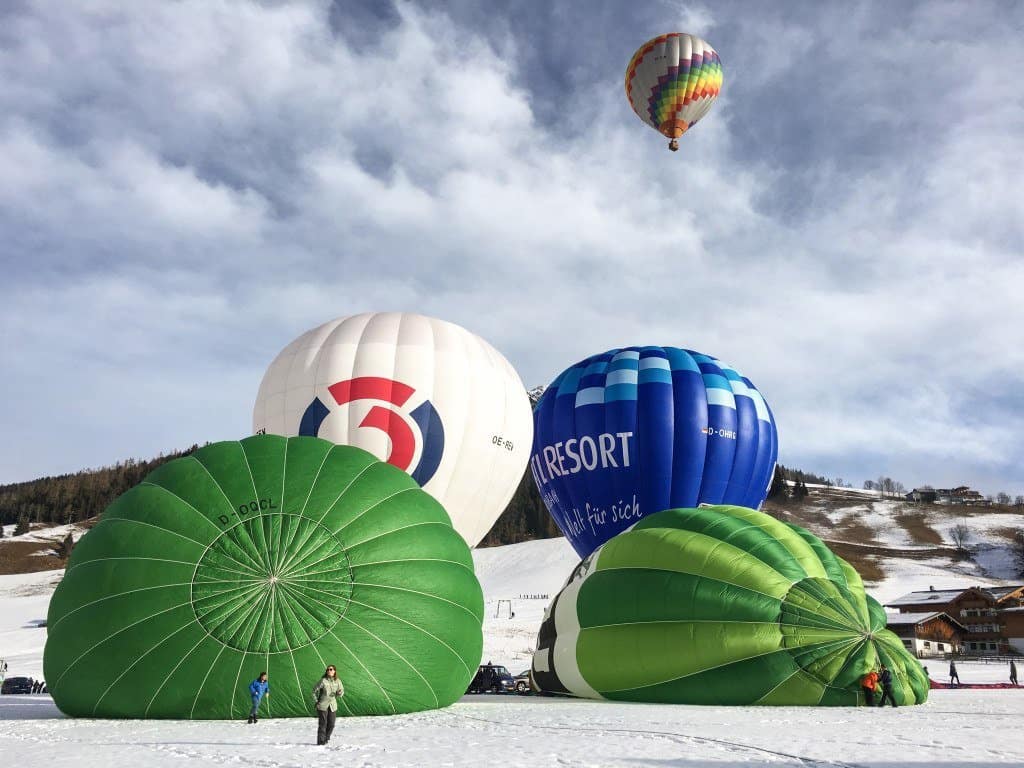 Filzmoos is one of the most beautiful places in Austria and the dramatic mountains make the perfect backdrop for the race.

A balloon race can’t be judged on speed nor can a destination be set because the wind and thermals over the alpine ranges are constantly changing.

The Dopgas Balloon Challenge winner is the team who travels the furthest distance. We wouldn’t discover who the winners were that evening at Filzmoos Balloon Night. 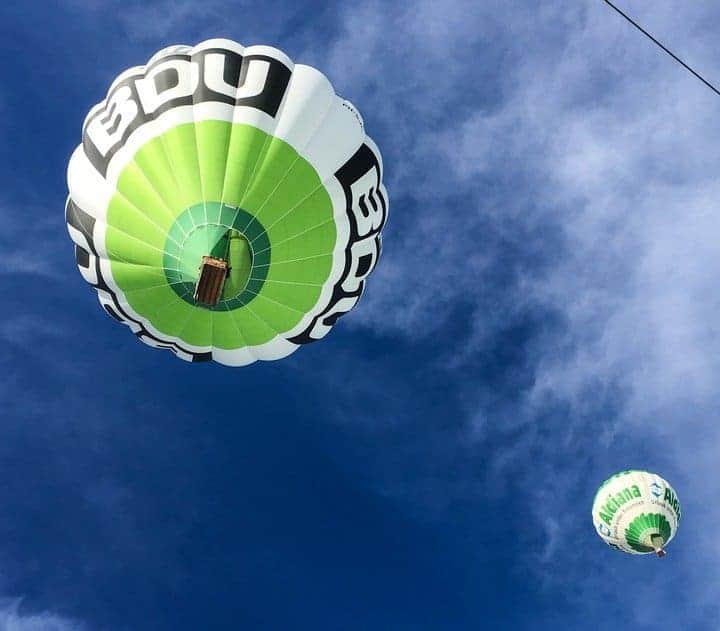 After spending the afternoon in the Filzmoos ski area we headed back to Hammerweise launch site in the evening to see the hot air balloons at night.

A completely unique and magical experience awaited us. The crowded field wafted with the spicy smell of gluewein. Colourful stalls sold iced gingerbread, small chocolate covered cakes and Lebkuchen biscuits. There is also live music and a DJ.

The ink-black skies were clear and speckled with stars. Although it was bitterly cold the balloons, back from the race, cast a warm glow as they took turns to light up in time to the music. The Filzmoos balloon festival is one of the best things to do in Salzburg in winter. 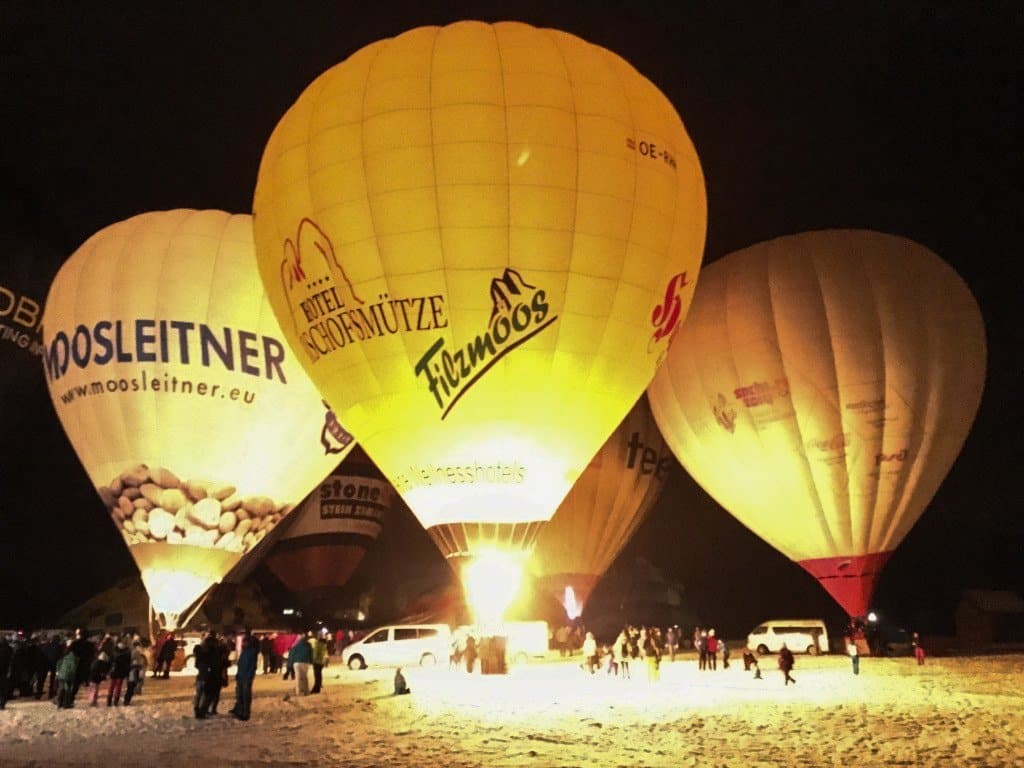 In the blackness of the field random balloons would suddenly light up like light giant lightbulbs as blasts of flaming gas fired into them. They were tricky to photograph because I had no idea which one would light up next! Hot air balloons at night are quite magical as they glow against the night sky.

Read more: If you like hot air balloons you’ll love Cappadocia in Turkey 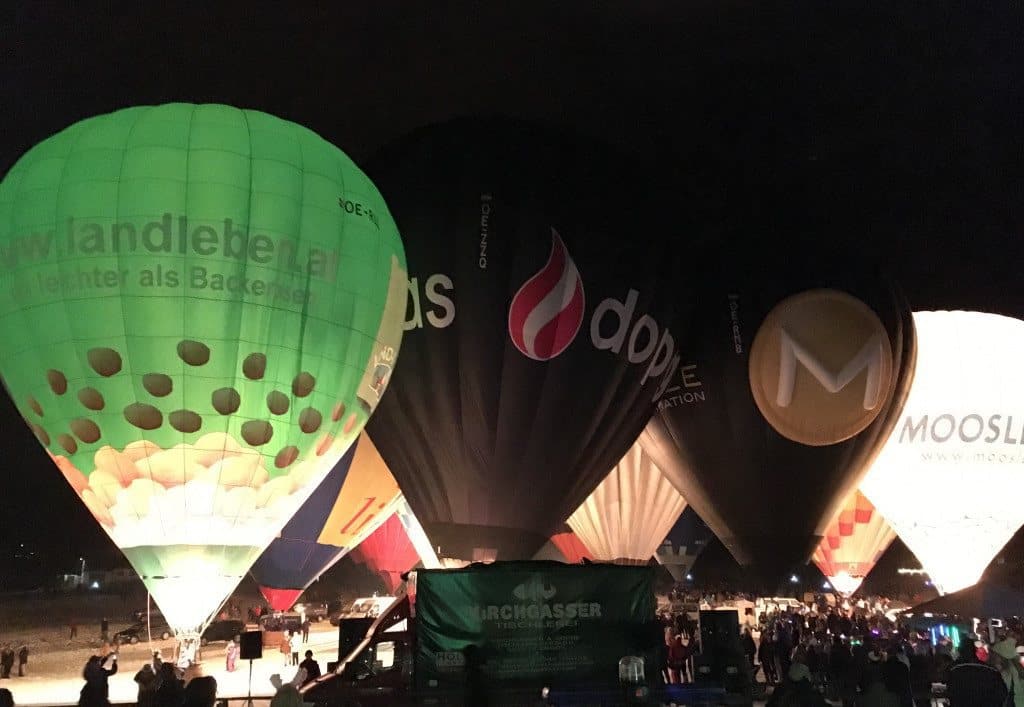 Filzmoos balloons at night and fireworks

It was really toasty wandering amid the balloons because the gas lighting them up warmed us. The spicy mug of hot gluewein helped as did the hot snacks and treats on the stalls.

We left the field to watch the enchanting spectacle from a distance and get an overall view of the balloons in all their glory. Our timing was perfect because the music started to build up to a choreographed finale.

The lit balloons accompanied the music with bursts of gas and light. Pop classics like The Eye of the Tiger and Bryan Adams’ Summer of ’69 belted out as the balloons glowed and dimmed in time to the music. A crescendo of Carmina Burana and a firework display brought the Filzmoos Balloon Festival to a spectacular climax.

I didn’t know anything like Filzmoos Balloon Week existed until I saw this magical event for myself. I’ll now be on the look out for more events like this. Have you been to a balloon festival or seen hot air balloons light up the night sky?

When is Filzmoos Balloon Week?

Daily balloon launches (Sunday to Friday) of around 45 hot air balloons from around 9 a.m. at the Hammerwiese launch site. (No start possible in bad weather).
Award ceremony on the village square on January 22, 2022 from 7.30 p.m.

The Night of the Balloons, Filzmoos

Thanks to Inghams who invited me to Filzmoos to check out the hot air balloons, Filzmoos ski area and the delicious Austrian food.

This is definitely a once in a lifetime experience, everything looks so festive and color against the snowy mountain backdrop. I would love to do this some day.

It was a fabulous experience which I'd love to repeat one day - the balloon colours look so vibrant against the snow.

Wow! Not sure why I've never heard of this - it looks amazing! I went in a hot air balloon in Australia, so this kind of scenery would be the complete opposite. Definitely one for the list!

I'd not heard of it either - it was an incredible day rounded off by a fantastic evening of music and light and the odd glass of gluewein! It must have been fabulous to float over Australia.

Well apart from the freezing factor, I would absolutely love to go. I have never been up in a balloon and the setting and beauty is just out of this world. The deal that Inghams are offering is good value as well. Great shots from your mobile Suzanne :)

We didn't notice the cold too much as there was so much going on and the heat from the balloons in the evening kept us warm. It's a great deal by Inghams - the food in the hotel is excellent.

I live the look of the colourful hot air balloons against the crisp white of the snow. We have been to Kitzbuhel, and a few other places in Austria, but it looks like we need to add Filzmoos to our ever growing list. Music, and hot gluewein - you have painted a very convincing picture

It was so unusual to see the balloons against the snow and mountains - quite beautiful too. I'd like to explore more of Austria too :)