Austrian mountain food is perfect for fuelling up after a hard day’s skiing. There’s no shortage of tasty winter warmers served up in the mountain huts and restaurants of Filzmoos in the Austrian Alps.

Hot, hearty dishes designed to ward off the cold and keep ski legs hot to trot. Here’s my guide to Austrian mountain food – just so you know your Gröstl from your Käsespäetzle…

This post may contain compensated links. This means if you click on a link and make a purchase, this site may receive a small commission. Thanks for your support. Find more info in my disclaimer.

Cheesy dumpling soup was a total revelation and I can’t believe I’ve not heard of this hearty little gem of a dish before trying it on our Filzmoos ski trip. Bread dumplings are filled with Tyrolean grey cheese or mountain cheese and then pressed flat and fried until golden brown.

They’re served in a beef broth and garnished with freshly chopped chives. The steaming broth is guaranteed to warm your cockles and the slightly chewy dumplings mean you’ll you’ll be ready to face up to the harshest white-out and not feel peckish for hours.

Cheesy dumpling soup was served up at Schörgi Alm. It’s a traditional piste restaurant which sits at 1600m at the top of the Papageno there are fabulous views and a large terrace which is perfect for summer dining.

The Alpine version of pizza! When I ordered this for lunch at Hotel Olympia in Filzmoos town I thought I’d ordered Quiche but a pizza-like dish arrived with bacon, sour cream, softly caramelised onion all garnished with a healthy sprinkling of rocket. It was quite unexpected, absolutely delicious and perfect for lunch accompanied by a cold beer.

Tiroler Gröstl, or Gröstl for short, is another bacon and onion dish but this Tirolean favourite is partnered with a carb-fest of piping hot potatoes. All the ingredients are fried up together and served with an egg on top. It’s brought to the table piping hot and still in the pan and it’s the perfect sharing dish.

You’ll need to loosen a button or two after going for Gröstl because no matter how hard you try you’re never going to burn off all those calories on the slopes.

Read more: What to Pack for a Ski Trip with free download

Käsespäetzle is Austria’s take on Macaroni cheese. Späetzle is a German pasta, that looks a bit like macaroni but is a poached dough similar to gnocchi or dumplings. It’s mixed with grated cheese and then baked in the oven and sprinkled with fried onion.

Portions are quite large so this is another great sharing dish which sometimes comes served with sauerkraut.

We devoured warming Gröstl and Käsespäetzle for lunch at Kleinbergalm, a Canadian log cabin that serves typical Austrian dishes and pastries.

You’ll find it at the top of the Grossberg chairlift and it’s well worth a visit to sample its fabulous food, check out the quirky alpine decor and warm your back on the circular chimney which sits in the centre of the restaurant. In fact, you probably won’t want to leave.

Kaiserschmarrn is a sweet Austrian pancake. It’s chopped into chunky pieces, sprinkled with icing sugar and served with apple sauce or plum compote. They’re thicker and richer than the type of pancakes you’d eat on Shrove Tuesday, made with more egg and baked in butter so just a bit naughty.

Kaiserschmarrn were a favourite of the Austrian Emperor, Kaiser Franz Joseph I, who they’re named for. We had the best pancakes after the Night of the Balloons at Pilz-Stub’n restaurant in Filzmoos town.

Read about Filzmoos International Balloon Festival where balloons light up the night sky in a choreographed musical display.

Kiachl is a traditional doughnut pastry fried in boiling lard. Yes, you heard right. I had no idea about that until after I’d eaten them and that probably explains why my ski pants were a little on the tight side by the end of the trip. They’re filled with cranberry jam and dusted with a fluttering of icing sugar.

That’s just a small taste of the delicious food that Austria brought to the table on our trip to Filzmoos with Inghams Holidays. France, Italy and Switzerland all have their own twist on mountain food – what’s your favourite Alpine dish? 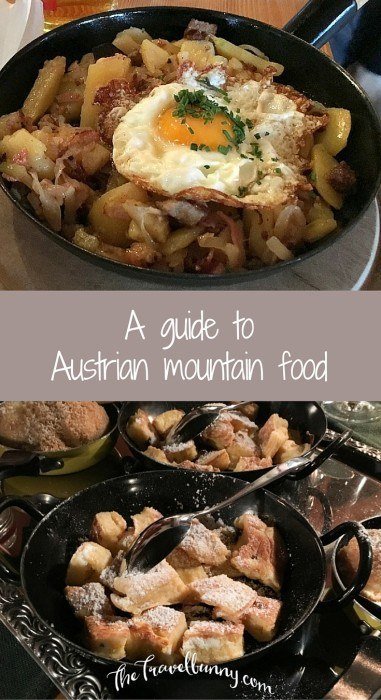 This looks so good (and I am now starving...) – can't beat cheese, bacon and potatoes in various combinations!

I know it's mountain food heaven - heading back to the Alps this weekend for more cheesy troughing!

Looks so yummy! Thank you for this article.

Oh it was so yummy!

Sand In My Suitcase

That cheese dumpling soup looks filling and delicious - as does the bacon tart. No excuse to go hungry if skiing in Austria, we'd say ☺.

Quite the opposite in fact - double activity required to burn it all off once I got home!

I have to say that all this Austrian food looks delicious. I'm off to Kitzbuhel soon so can't wait to sample some of these delicacies

Mountain food is so good but soooo calorific - hope you'll be skiing or walking lots :)