Seligman, Arizona on Route 66 was the quirkiest stop on our US Road Trip and a total eye-popper. The longest surviving section of America’s iconic road starts in Seligman and runs 160 miles to Topock, Arizona.

It would be wrong to take a US Road Trip without eating up a few miles of tarmac on the Mother Road and Seligman was the perfect stop for Route 66 kicks. 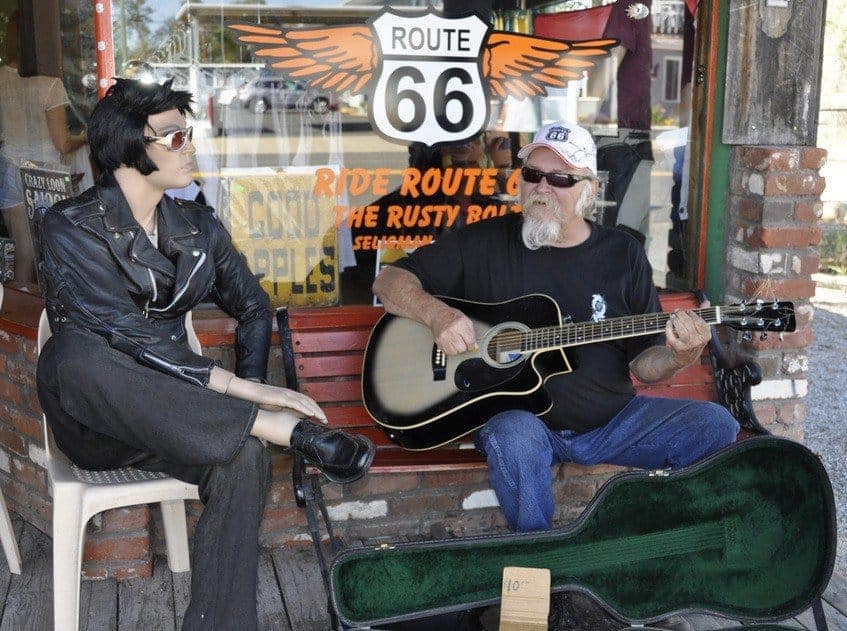 After checking out Hoover Dam and The Grand Canyon West Rim we drove the 108 miles to Seligman arriving in town at dusk. We cruised down Main Street checking out vintage neon signs, 50s-style motels and bars with dodgy looking mannequins posing on rooftops – seriously weird. Seligman seemed like a quirky kind of town and the perfect place for our Route 66 fix. 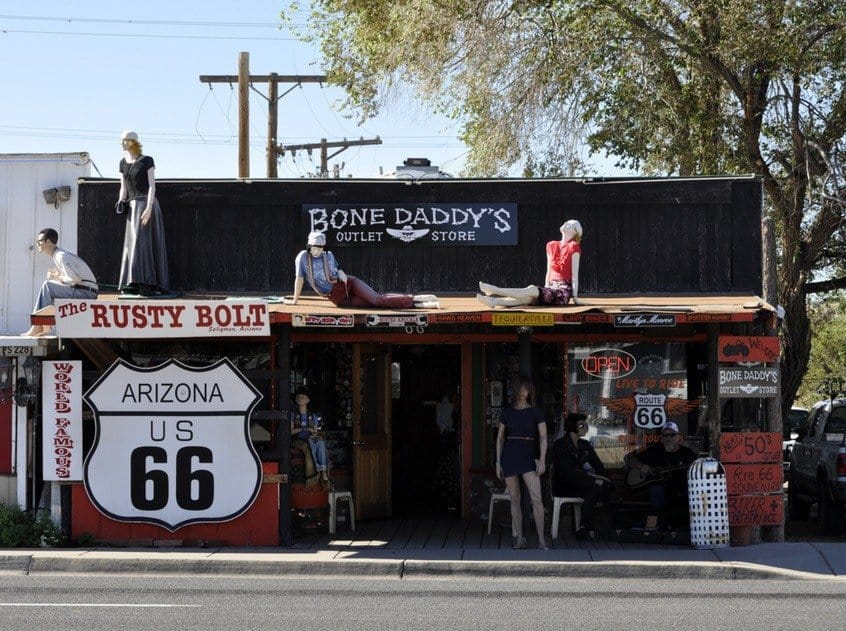 We liked the look of Canyon Lodge motel, which also has its fair share of quirk, and they had rooms available so we checked in and then headed out to eat. We passed by Roadkill Cafe (you kill it we grill it) and headed for Westside Lilo’s diner where we tucked into perfectly cooked Flat Iron steak and chips. The food was great, the atmosphere lively and the place awash with small-town hospitality with walls plastered in Route 66 memorabilia and stuffed animals. One guy stood up to leave with a rifle in his hand which shocked us a bit (us Brits aren’t used to guns) until we realised it was the top of his walking stick carved into the shape of a rifle butt.

After we’d eaten we stopped by The Black Cat Bar because the motel owner told us we’d find “real cowboys in there”. There weren’t any but we shot a few games of pool before heading back to our motel where John Wayne was waiting for us in our cowboy themed room.

Next morning we checked out the town and found that it’s even quirkier in daylight. Seligman is filled with kitschy Americana and it wasn’t long before the tour buses rolled up and what had been a quiet little town was thronging with tourists, bikers and local characters. 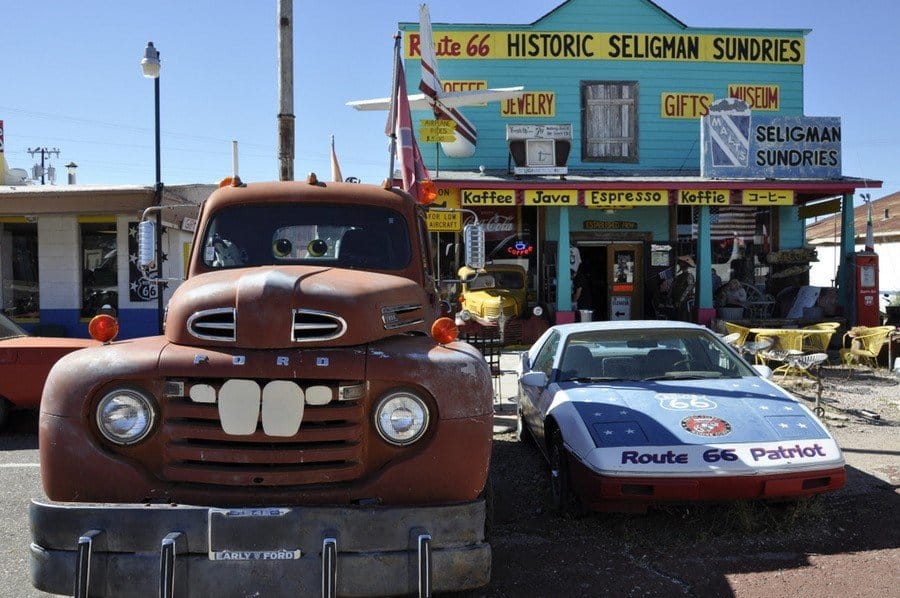 Allegedly, the Pixar animated movie ‘Cars’ is based on the town of Seligman and there’s a collection of old cars decorated like those from the movie parked along Main Street. 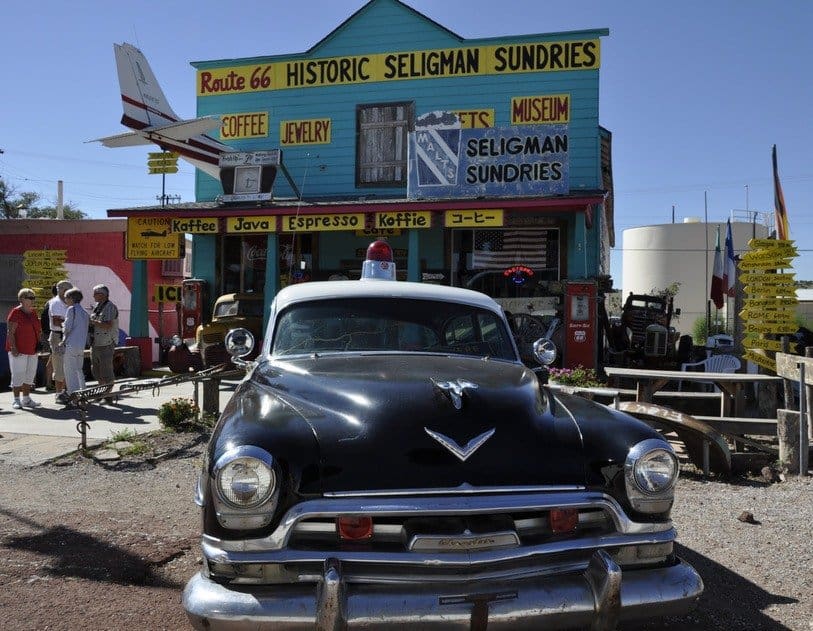 The History of Route 66

Route 66, also known as the main street of America, was one of the original US highways. America’s most famous road was established in 1926 and it ran for 2,448 miles from Chicago to Los Angeles. US 66 was the route for people travelling West to start new lives after the Great Depression and was immortalised as ‘The Mother Road’ in John Steinbeck’s 1939 book The Grapes of Wrath.

The road transported weapons across the US during WWII and then troops returning home when the war finished. In the 50s and 60s it was the setting for many an epic road trip. In the mid-70s Route 66 began to be bypassed by the new Interstate 40 with the town of Williams, between Seligman and Flagstaff, being the last point on US 66 to be bypassed in 1984.

For more American quirk check out ‘Florida, the weirdest state in the Union’ here 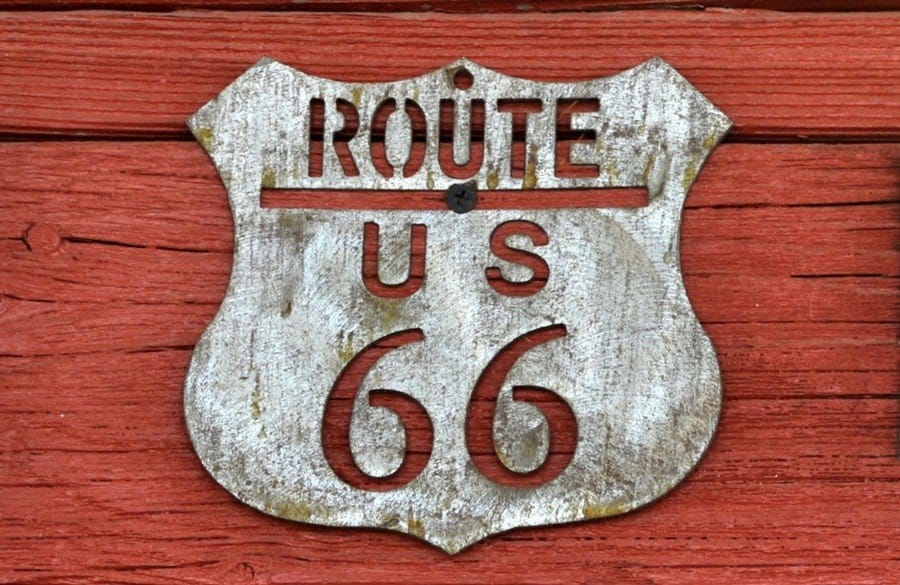 Angel Delgadillo grew up in Seligman and ran the town’s barber shop. He saw the day when the Interstate 40 opened and replaced the road that brought thousands of cars through the town daily. Overnight Seligman’s livelihood disappeared and for ten years the townspeople struggled on or moved out.

If it hadn’t been for Angel the town would have dwindled into the dust. He believed that people wanted to find the real America and got together a group of passionate townspeople with the aim of making old Route 66 an ‘historic’ highway. 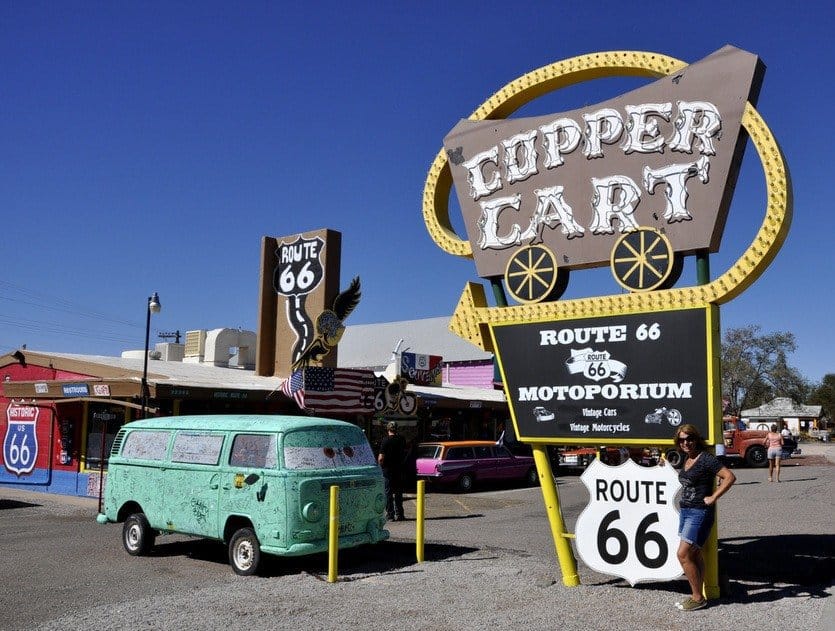 The group met at the Copper Cart restaurant and formed the Historic Route 66 Association of Arizona. In November 1987 the State of Arizona acknowledged the stretch of road from Seligman to Kingman as ‘Historic Route 66’. Other sections of road followed and people began driving Route 66 again.

Angel’s barber’s shop is still there and you can sit in the chair and if Angel’s around he’s happy to chat about the town and Route 66. The shop is a visitor centre and gift shop now run by Angel and his family where you can buy Route 66 memorabilia and souvenirs. I got the t-shirt! 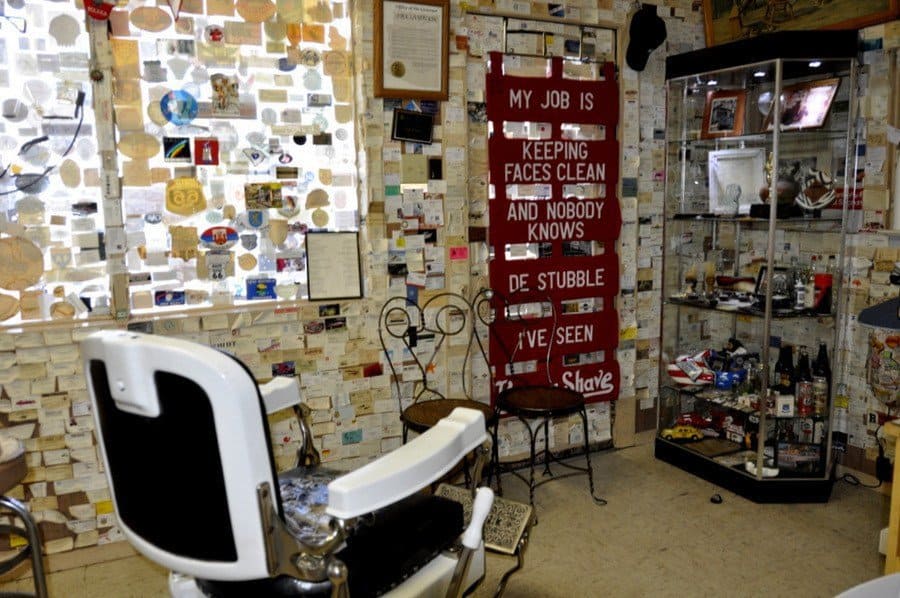 The Snow Cap is an institution and a must-do if you’re passing through serving drinks, ice cream and hamburgers. It was cobbled together in 1953 out of rail yard scrap by the late Juan Delgadill, Angel’s brother. Even today it’s a work in progress with bits of car, travel ephemera and route 66 memorabilia being added all the time.

The entrance has two door knobs – one real, one fake, they serve ‘cheeseburgers with cheese’ and the neon sign out front states ‘sorry we’re open’. The Snow Cap is the epitome of quirk and is run today by Delgadillo’s sons. 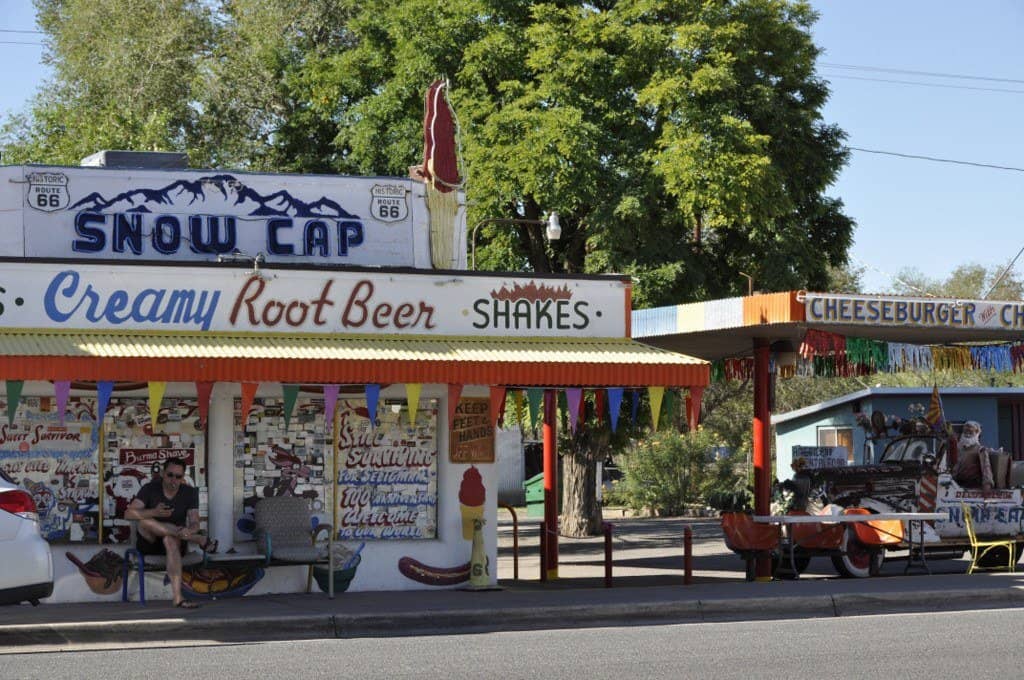 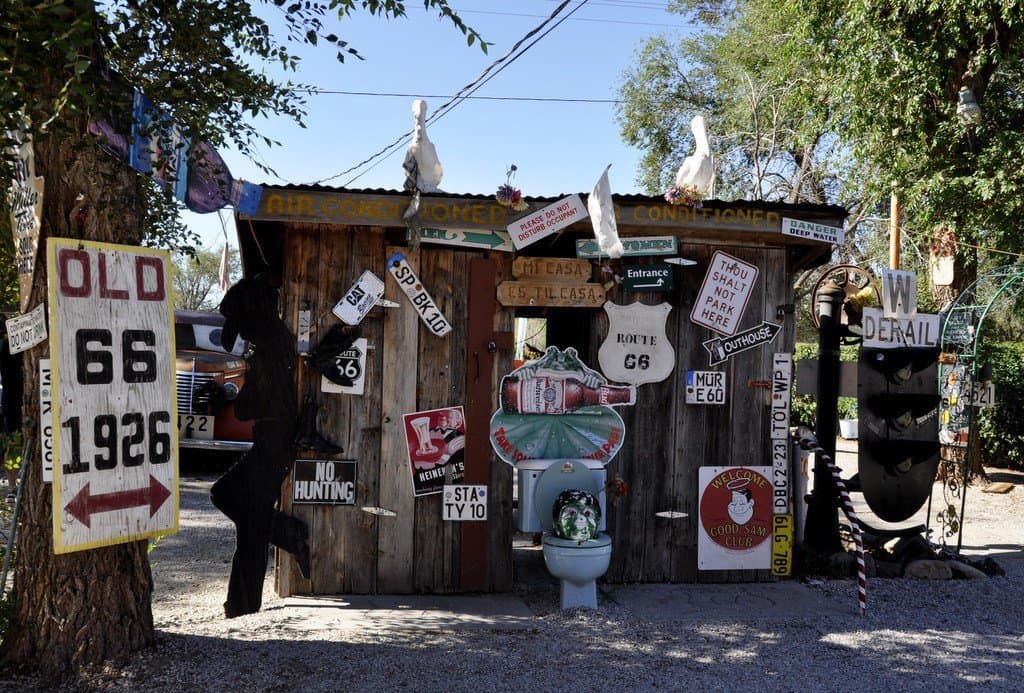 The old guy in the shot below introduced himself as ‘Luke Texas Brock – 85 years young’. His grandfather lived to 122 so he’s got a few years to go yet. He was in Seligman looking for an old friend who used to live there.

He’d travelled to Seligman in his camper van and gone to where his friend had lived but his house was no longer there. He didn’t let it get him down and was really pleased to be back in Seligman – he even did a little dance. 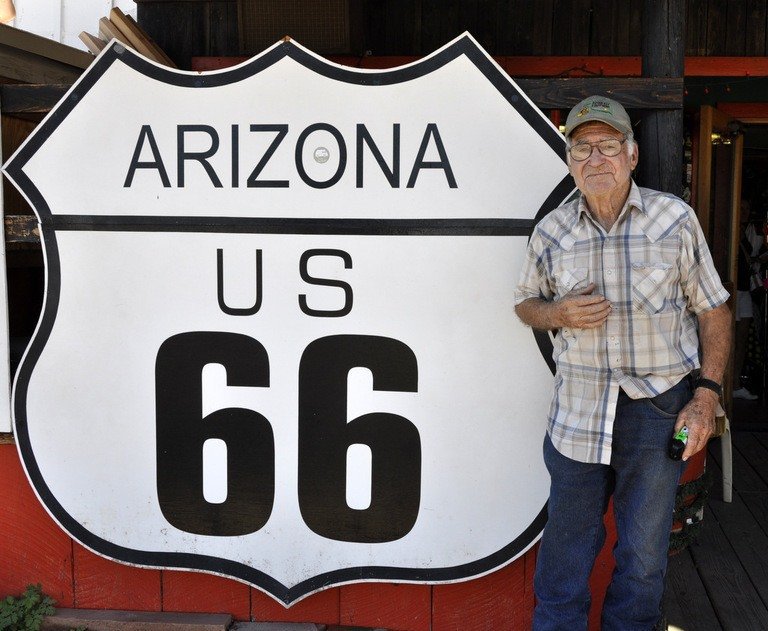 Where to Stay in Seligman 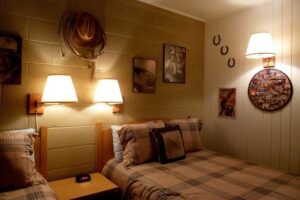 We stayed at Canyon Lodge Motel. The Elvis, Harley Davison and Marilyn Monroe rooms were taken but the John Wayne room and the Vegas Honeymoon Suite were available. We flipped a coin and the other Mr and Mrs Jones got the Vegas room complete with mirrored wall and red velvet curtains. Nice. We were more than happy with the John Wayne room with its cowboy-themed decor. Our room was $63 per night plus taxes and included a basic continental breakfast and wifi. There was a fridge, microwave and kettle in the room which was spotlessly clean. 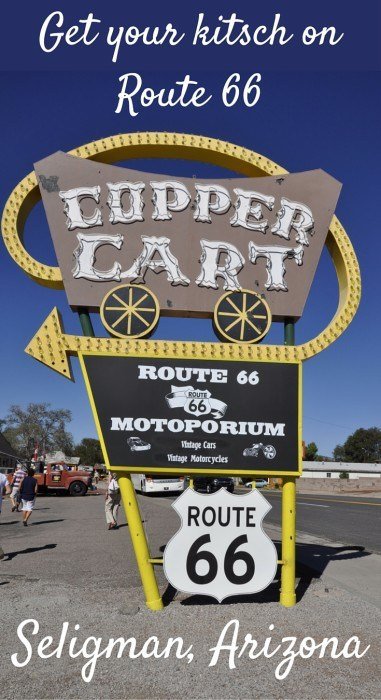 Seligman is one of the most unusual towns I’ve visited, bursting with kitsch and characters and is a real gem. Perfect for your Route 66 kicks. Where’s the quirkiest town you’ve visited…?

I absolutely loved this place! Such a quirky stop on the way to the Grand Canyon :)

We found it when we realised we weren't going to make it from Grand Canyon to Flagstaff before nightfall - epic find!

This sounds awesome! Quirky is more my thing, but my brother is travelling Route 66 this year so I will send this on to him :-)

What a fab place! Love these quirky places and the southwest has plenty – I didn't make it to this one though but one for the nest southwest trip!

Definitely worth a drive through!

Sweet! I'm going to be heading this way the the summer sometime. I'll be sure to stop by and check it out. Thanks for sharing!

Great - let me know what you think!