The Hoover Dam sits wedged into Black Canyon, holding back the force of the mighty Colorado River on the Nevada-Arizona border. It’s an incredible feat of engineering built in just five years during the Great Depression. Originally called the Boulder Dam it was constructed to prevent flooding in the area, to help with irrigation in the desert and to generate hydro-electricity. If you’re in Las Vegas, which is less than 35 miles away, visiting Hoover Dam is a must-do day trip. 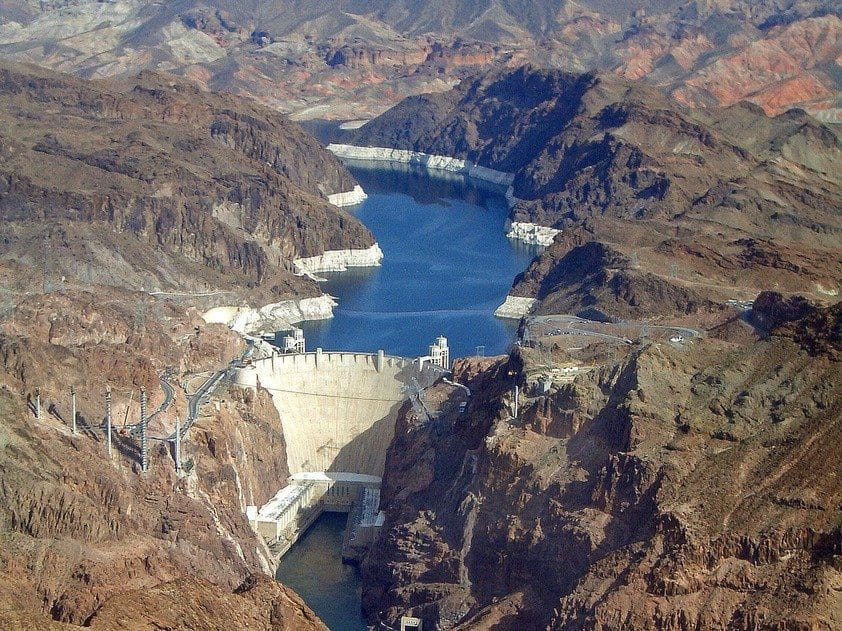 I’ll admit I wasn’t that bothered about visiting the Hoover Dam during our road trip. I’d seen it from a helicopter ride on a trip to the Grand Canyon about 9 years ago. It looked impressive from the air but I didn’t feel the need to see it up close. That’s the great thing about travelling with friends; you find yourself doing things you might not otherwise consider. Our mate Julien works in construction and was keen to visit Hoover Dam so we decided to stop by en route from Las Vegas to the Grand Canyon. I’m so glad we did because it was fascinating and, of course, around one million visitors a year can’t be wrong can they…

After parking up we passed the bronze Winged Figures of the Republic, one either side of the US flag. There’s also a memorial to the 96 construction workers who lost their lives building the dam. Both features had a distinct Art Deco feel to them. It’s incredible to think that the dam was built by hand in just five years and was finished two years ahead of schedule, under budget. That just wouldn’t happen nowadays. 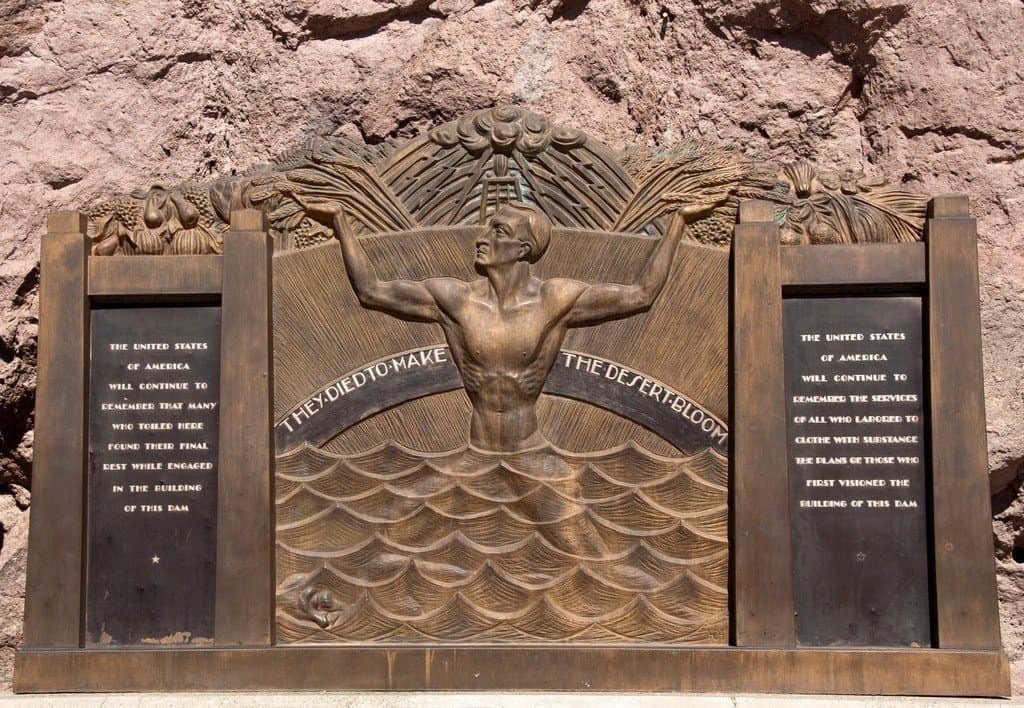 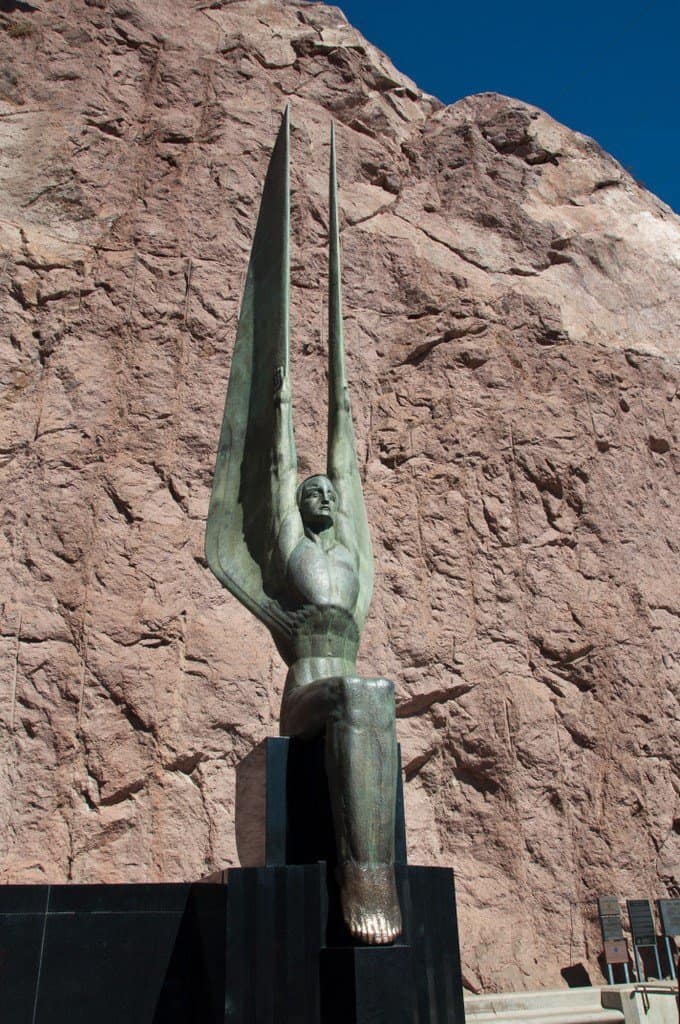 We were instantly drawn to the sparkling blue waters of Lake Mead which was created when the dam was built. The lake was last full in 1998 but due to lengthy droughts the volume has fallen by over sixty percent and water levels have dropped over a hundred feet. That’s one big tide mark. The man-made lake is a popular recreational area used for fishing, boating and water activities. 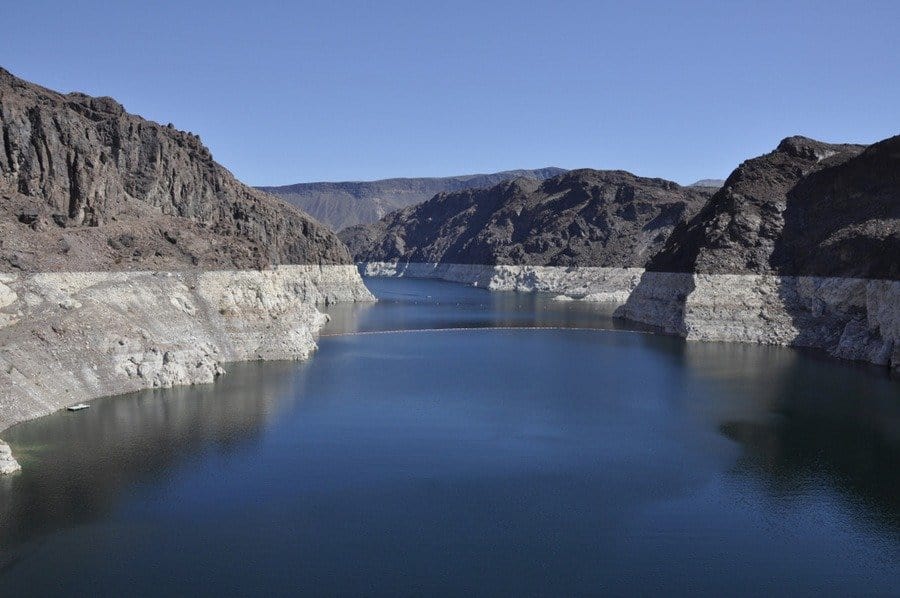 Four 338ft high Intake Towers stand in the waters of Lake Mead and siphon water into the power plant. There are two towers on the Nevada side and two in Arizona. 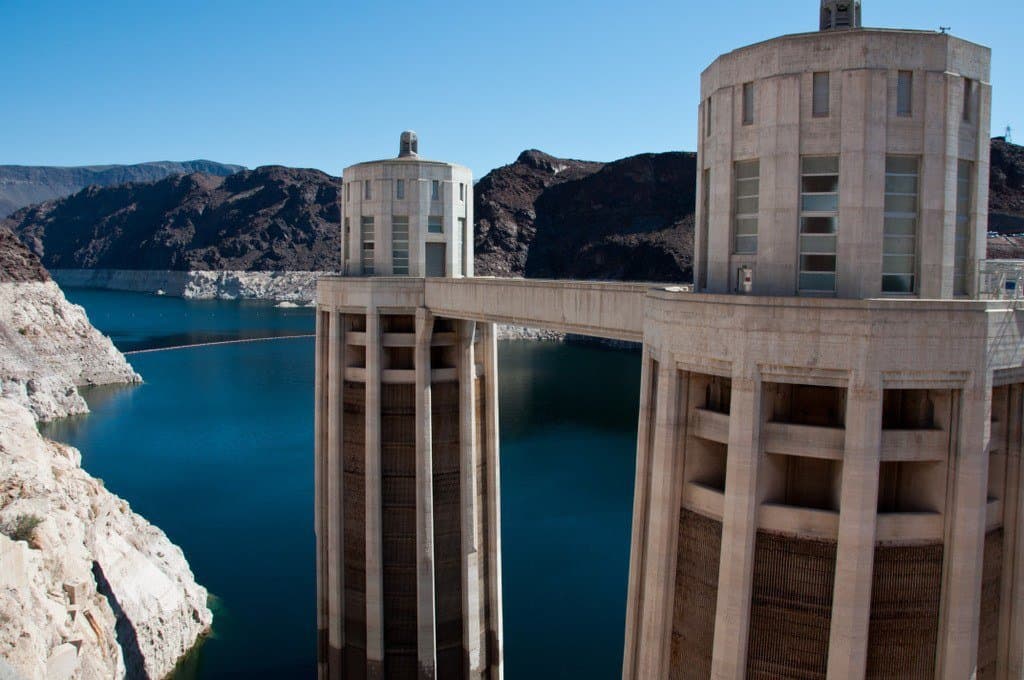 The two towers nearest the dam each display a clock – one shows ‘Arizona time’ and the other ‘Nevada Time’. There was no time difference when we there as it was still summer time. In autumn Nevada switches back to Pacific Daylight Time and will then be an hour behind Arizona.

If you’ve ever felt the need to be in two places at once you can stand by the plaque below with a foot in each state. It marks the border where Nevada and Arizona meet. 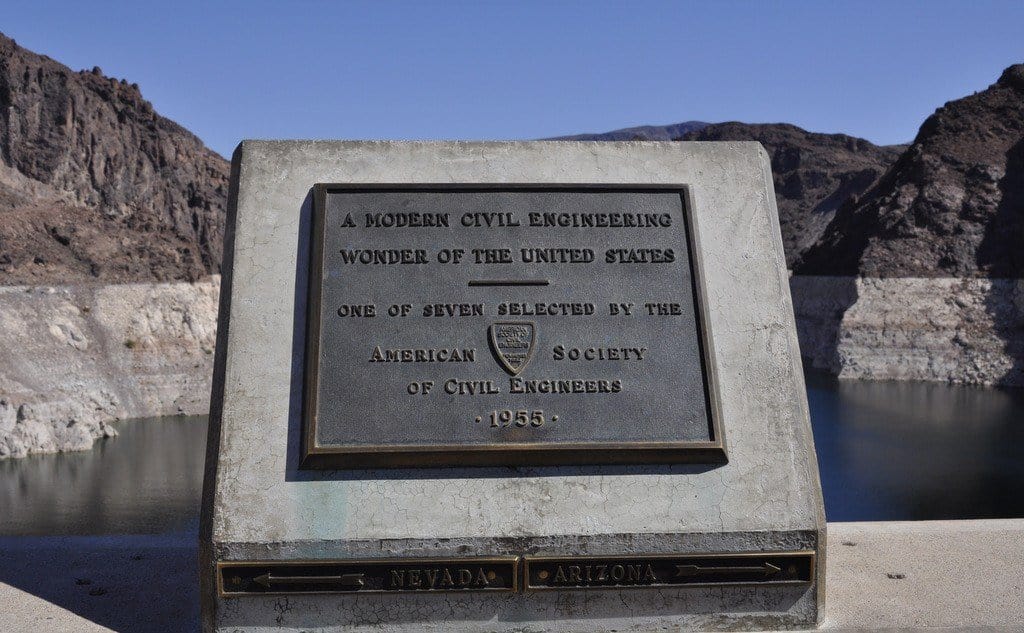 We walked the length of the top of the dam to the Arizona side passing Art Deco styled lifts and features. We then crossed over the road to take a closer look at the dam itself. Until I was standing on top of it looking down I had no idea how huge Hoover Dam is. It’s immense and the vast expanse of curving concrete just goes on and on. It’s an incredible feat of engineering and also rather elegant. 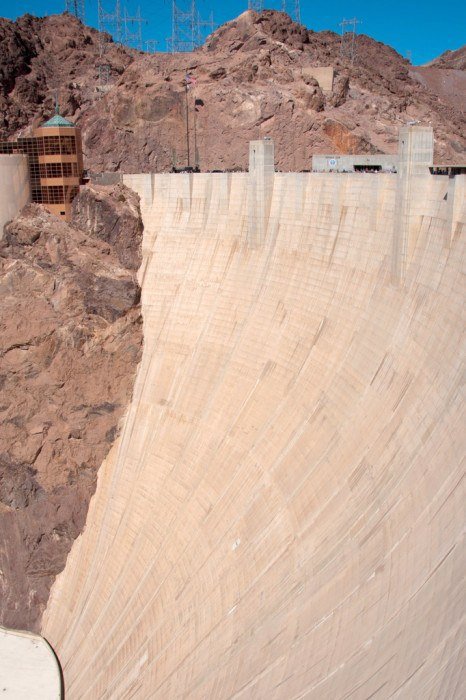 The Hoover Dam is an arch-gravity dam; thickest at the bottom at 660ft and just 45ft at the top and it’s 726ft high. It’s filled with around 6.6 million tons of concrete (3.25 million cubic yards); that’s enough to pave a 16ft wide and 8-inch thick path from New York to San Francisco. Below the dam is the power plant and the canyon wall outlet works.

The two-lane road over the dam was in use for passing traffic right up until 2010. But 14,000 vehicles crossing daily became unmanageable and more recently they were also considered a security risk. The Mike O’Callaghan–Pat Tillman Memorial Bridge, the second-highest in the US, opened in 2010. The arching bridge now carries traffic between Nevada and Arizona states on its four-lane highway. You can take a short walk up to the 840 ft bridge and walk across to take in the views of the dam with Lake Mead behind. It’s a great spot for photographs. 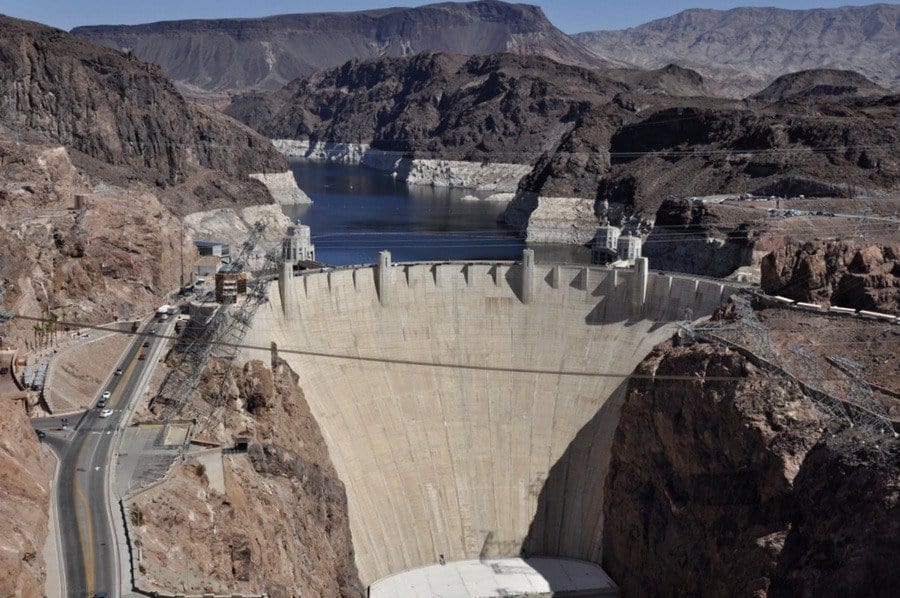 How to get from Las Vegas to Hoover Dam

It’s just a 45-minute drive from Las Vegas to the Hoover Dam. From The Strip drive east on Flamingo Road or Tropicana Avenue to U.S. 515 South, which automatically turns into US Highway I-93 South. Continue on US Highway 93 South for about 20 miles to Boulder City. Once in Boulder City, turn left at the second set of lights (there are only 2). Continue on US 93 to the Dam on the Nevada/Arizona (about 7 miles from Boulder City). Turn off onto state Route 172, a two-mile access road to the dam and parking areas. If you don’t turn off onto Route 172 you’ll stay on US 93 and continue over the bypass bridge into Arizona.

There are also many coach tours taking full and half-day tours from Vegas which can be booked along the Strip or through your hotel concierge.

There is parking for 450+  in the garage on the Nevada side of the dam (open daily from 8 a.m. to 5:15 p.m) at a charge of $10.00 fee per car. But you don’t need to pay for parking – drive across the dam itself, which is a must-do, and you’ll find free parking in various areas on the Arizona side.

So, if you’re in Vegas go visit the Hoover Dam dammit! Have you been somewhere that you loved a whole lot more than you thought you would? Do tell…

It's one of those places I'd be ambivalent about seeing too, Suze, and it would depend on how much time you had in the area, but the views are immense. I don't think I've seen most of this detail before so thanks for sharing. :)

I was so pleased we went and we did spend longer than we expected there as it was so interesting. :)

Very neat! Hoover Dam is pretty incredible. My girlfriend and I were down there a couple years ago, the lake was pretty low then too. Maybe will all the snow that the Sierra's have been getting the lake will finally get a little rejuvenation.

We'll definitely be visiting this on the way to the Grand Canyon. Looks like a brilliant stop off point to break up the drive! On the drive from Vegas, do you mean route 172 rather than 176? I'm trying to work out the route now and am not sure if we go across the bridge on Highway 93 or if we have to get off before that? Any tips appreciated! :)

Yes, route 172 - you need to turn off Highway 93 or you'll carry on over the bypass and miss the dam.

Hoover dam is incredible - we actually had the opportunity to go down for the tour - those GIANT generators are NUTS! I think you should definite revisit and take that tour.

I'd love to go into the depths of the dam and see those generators!

I just can't believe the colour of the water, it's amazing! Interesting to read about the bridge too, the photos from there must be fantastic

I'd really like to go back and take the tour into the depths of Hoover Dam.