I believe you can learn a lot about a country, its people and its geography by the food that’s eaten there; the combination of flavours, the presentation and cooking methods used.  Getting to know a country’s cuisine and the excitement of discovering new flavours is all part of the journey.  Icelandic food was no exception. Here’s how I got on eating my way round Iceland…

I’d heard some pretty gruesome tales of what to expect and my taste buds arrived in Reykjavik with more than a little trepidation about the food I’d find on my plate. I’m happy to say I didn’t need the stash of chocolate Hobnobs I’d secreted in my case because Iceland served up some fabulous food.

What to eat in Iceland

So, what to eat in Iceland? Staple dishes include lamb, skyr, potatoes and fish – lots of fish. Iceland sits surrounded by chilly North Atlantic waters filled with cod, haddock, herring, halibut, skate, lobster, and salmon. The fish you’ll find on your plate in the evening was probably caught that morning.  Huge geothermal heated greenhouses produce fresh vegetables and the country’s environmental awareness means that the meat, fish and seafood is some of Europe’s healthiest.

Some of the traditional fare (vegetarians look away now) is not for the faint-hearted but don’t panic because restaurants in Reykjavik also serve a lot of what you’d find at home.  Here’s what Icelandic cuisine brings to the table both traditional and modern…

The lamb I ate in Iceland was beautiful, in fact the best I’ve ever tasted!  Fillet of lamb served with root vegetables, parsnip, and red wine sauce was delicious, melt-in-the-mouth tender and full of flavour. I’m salivating just thinking about it again.

Because Icelandic sheep roam freely in the highlands grazing on grass, plants and wild herbs the result of this idyllic life is a lean and tender meat full of flavour and devoid of hormones or pesticides. And its good to know they had a bit of lamby happiness before, well, you know… 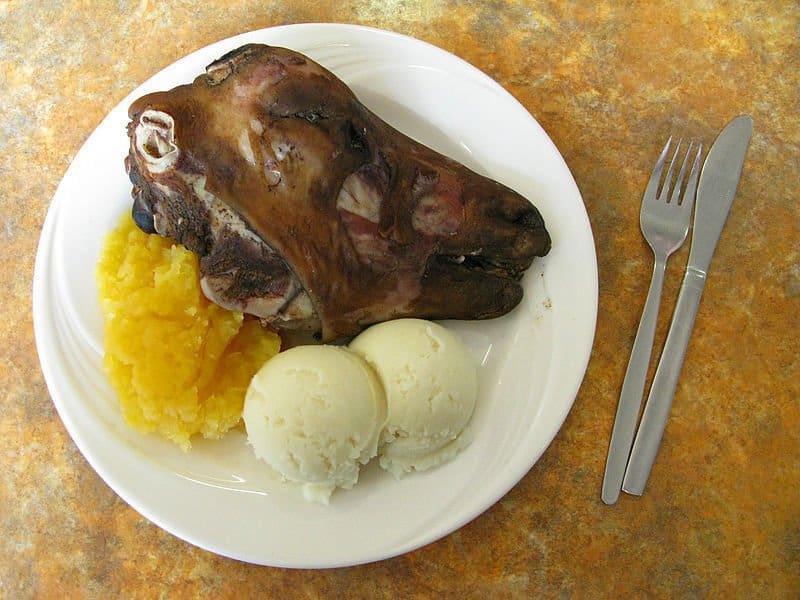 Here’s the heads up on Svið. A sheep’s head is singed to remove the wool, cut in half, de-brained, boiled and served with mashed root veg and then the lot devoured; including ears, eyes and tongue.

I’d have tried a bite or two had the opportunity had arisen. Fortunately it didn’t – ditto the ram’s testicles pressed into cakes and pickled. But these aren’t just quirky snacks; the way the whole of the lamb is used and preserved was born from necessity and the need to get through lean, freezing Icelandic winters.

I wasn’t going to leave Reykjavík without sampling their infamous hot dog.  Bæjarins beztu pylsur (the best hot dog in town) has served hot dogs since 1937 from a hut opposite the harbour in downtown Reykjavík.  They differ from your average dog in that they are made with lamb as well as pork and beef which gives them a slightly meatier flavour and a firmer texture.

The best way to eat them is ‘eina með öllu’ with everything. Which means your dog is loaded with two types of onion, crispy deep-fried and raw; ‘pylsusinnep’ a sweet brown mustard; ketchup and all finished off with remoulade, a mayonnaise mixed with finely chopped gherkin and caper.

This combination adds up to a whole lot of flavour.  I’m not a big fan of hot-dogs but had to try one to see if these really are the best hot dogs in the world. Verdict.  Probably because every time I passed that hut there was a queue. Personally I thought they were okay.  One hot dog costs 300 ISK so a good cheap lunch option on the go. 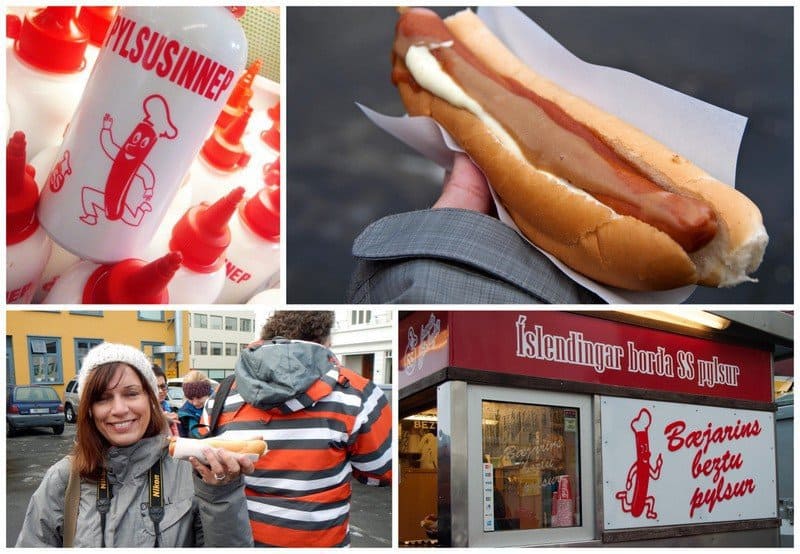 Icelandic fish is plentiful, fresh and delicious due to the abundant waters surrounding it. One of my favourite Icelandic fish dishes are deep-fried crispy cod balls. After biting through the light crisp batter the white, succulent cod is a wonderful contrast.

Other favourites were the more healthy foods like shrimps on open sandwiches of rye bread with a twist of lemon, delicately smoked trout or salmon and meaty monkfish.  All locally sourced and beautifully cooked.

Shrimps with egg and Ravioli

Iceland has its fishy dark side in the form of cured shark. The abundant Greenland shark is poisonous because of high levels of urea present in the flesh which, by the way, smells like ammonia.

Icelanders have come up with an ingenious way of making it eatable, although not necessarily palatable, and only slightly poisonous. So that’s nice.

The meat is cured by burying it in sand for 6-12 weeks before hanging it to dry and ferment for four to five months. After this is done it’s called Hákarl, and is safe to eat. Yay!

A small cube is swallowed and quickly washed down with a shot of Brennivín, Icelandic schnapps. Also known as Black Death Brennivin is made from fermented potatoes and caraway seeds. Did I try it? Yes, but I skipped the shark course… 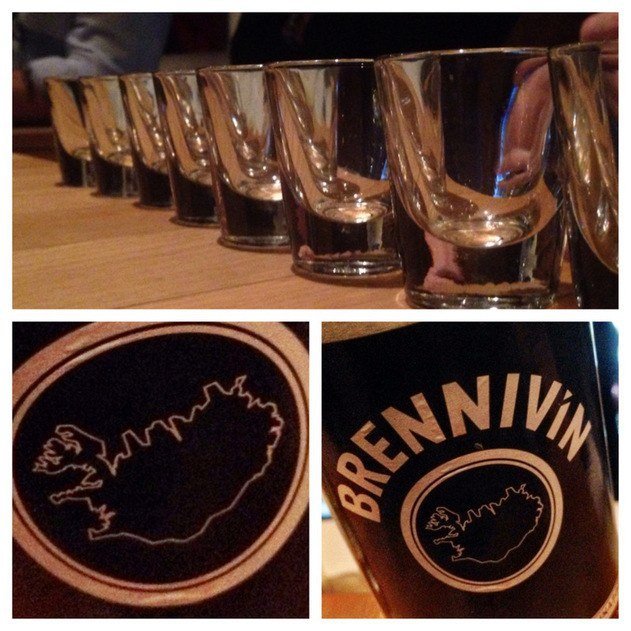 Talking of alcohol, one of the top four lagers in Iceland is Gull which is made with Icelandic barley and water. Gull is sold in most bars and every state alcohol shop in Iceland. Beer was banned in Iceland from 1915 to 1st March 1989 so beer day, Bjórdagurinn, is celebrated on that day every year now. Gull is best served ice cold!  Alcohol is expensive so it’s worth picking up a duty-free bottle from your departure airport. 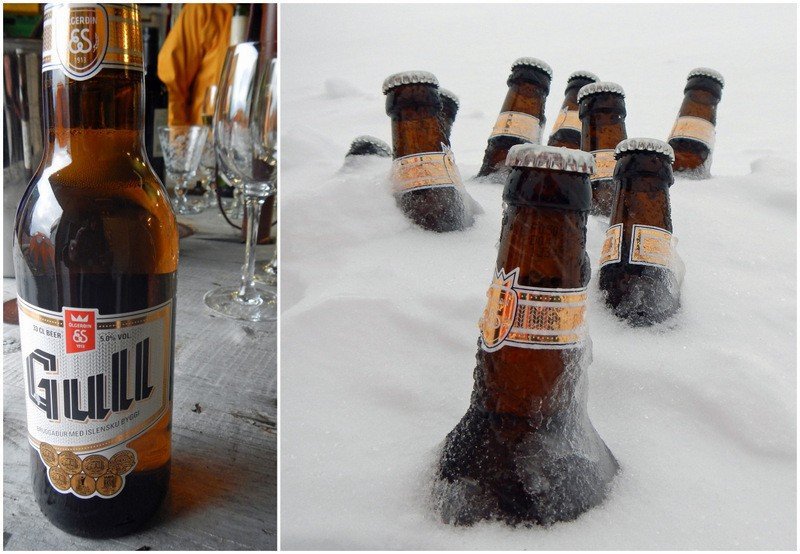 Last up let me introduce you to skyr. Technically it’s a soft cheese, made from gelatinous milk curds which tastes like a mix of yoghurt and crème fraîche. It’s gorgeous was my food of choice for breakfast – fab with blueberries, muesli and dehydrated strawberries. The best bit though is that this super food is high in protein, rich in calcium and low carbs and fat so it’s actually good for you! Many UK supermarkets now sell Skyr. 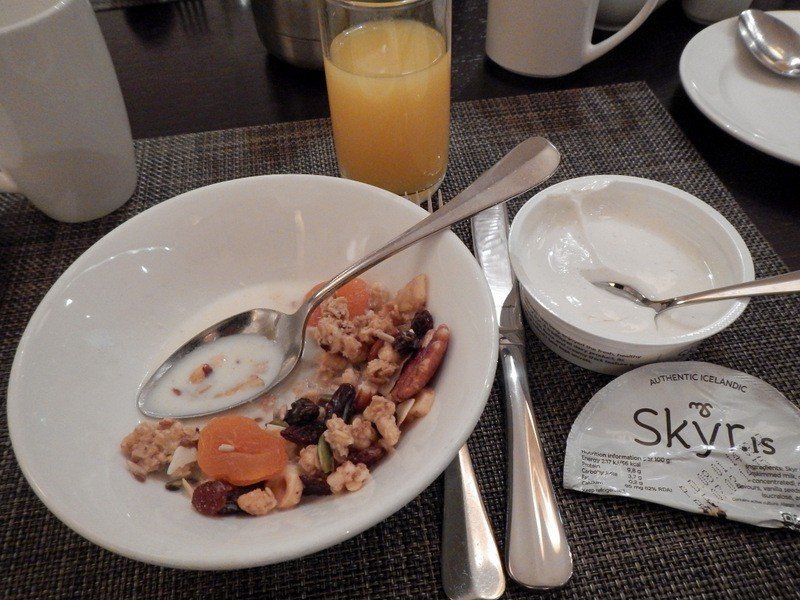 That’s a little taster of some of the food I sampled. Icelandic food is fresh, interesting and absolutely delicious. Yes, there are some foods that may not appeal but you don’t know until you try them. Given the chance I’d have had a small taste of everything I’ve told you about here – even the fermented shark!  What’s the weirdest food you’ve ever tried and where did you eat it? 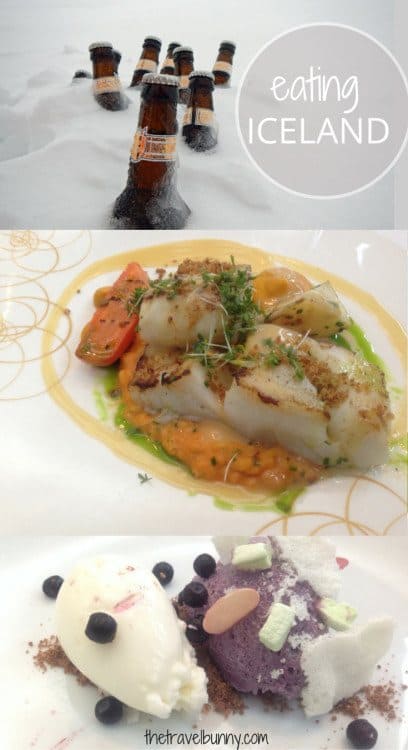