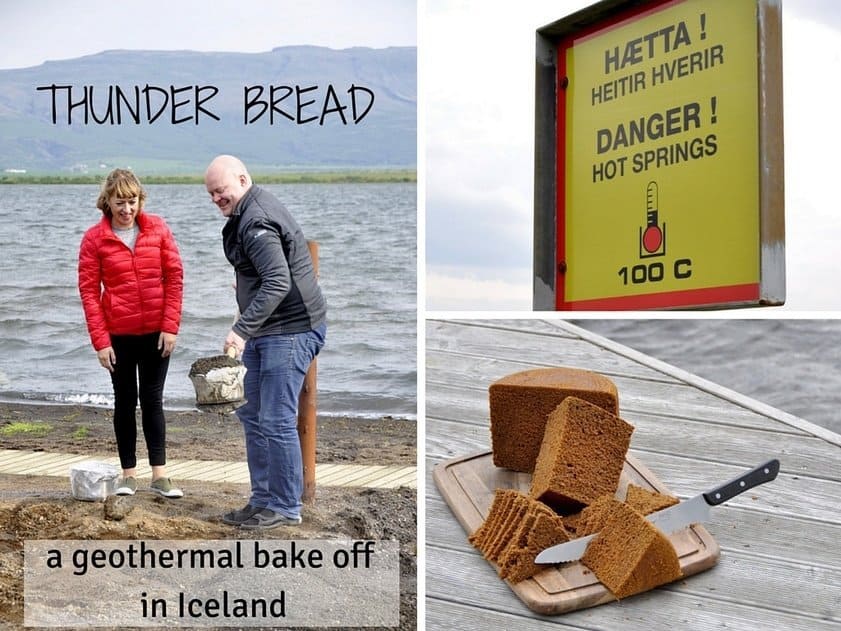 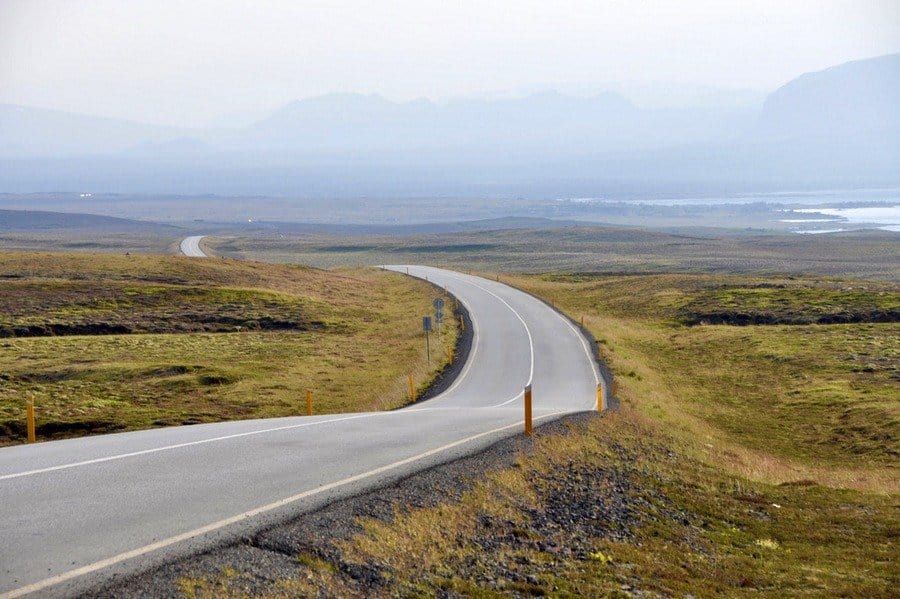 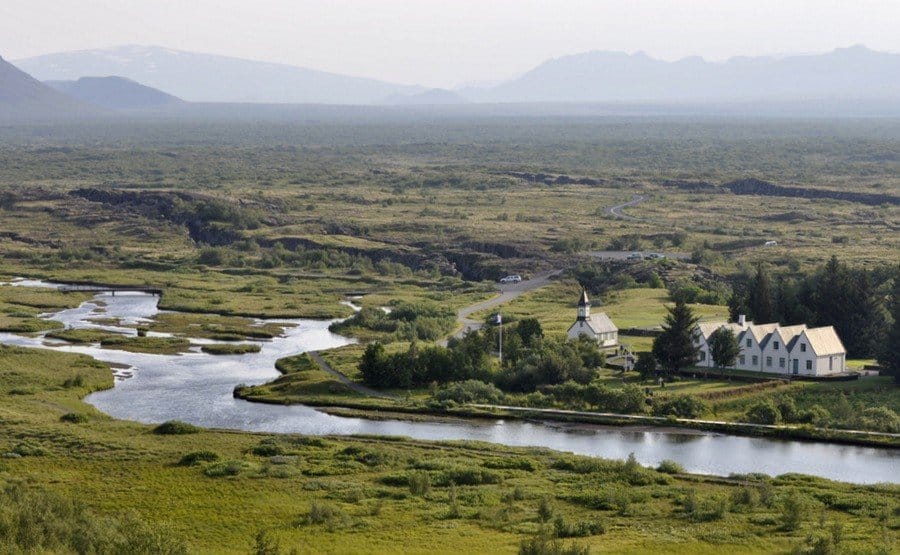 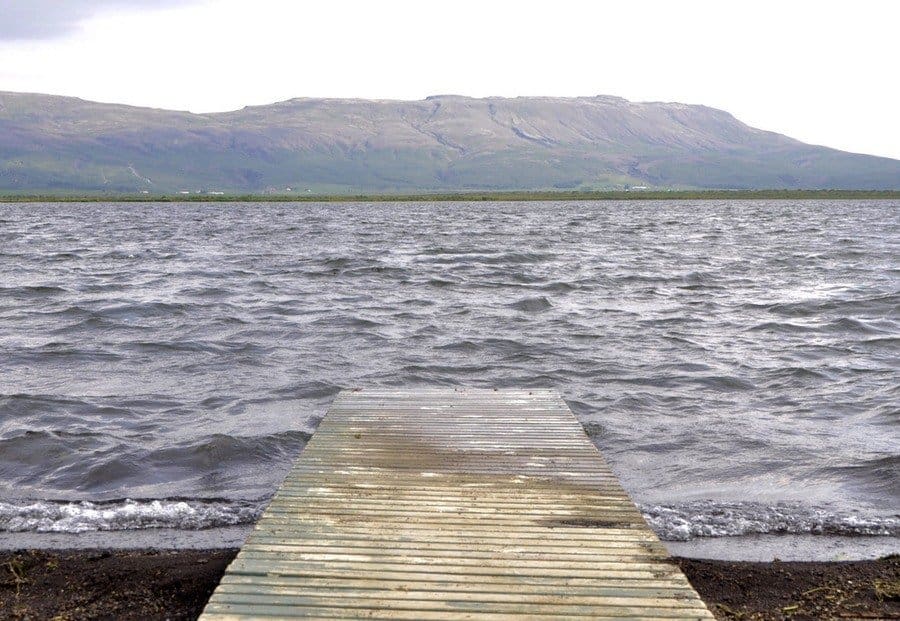 Thunder Bread is just a nickname, it’s actually called Hverabrauð (hot-spring bread), or rugbrauð and is a type of rye bread. It’s steam-cooked underground in a geothermal spring. Every Icelandic family’s recipe for Thunder Bread is slightly different with ‘more of this’ and ‘less of that’. Of course, each family thinks theirs is the best.

It is also served at Thorrablot, the Viking festival honouring Thor, the god of thunder. As Siggi says ‘It’s pure Iceland’. 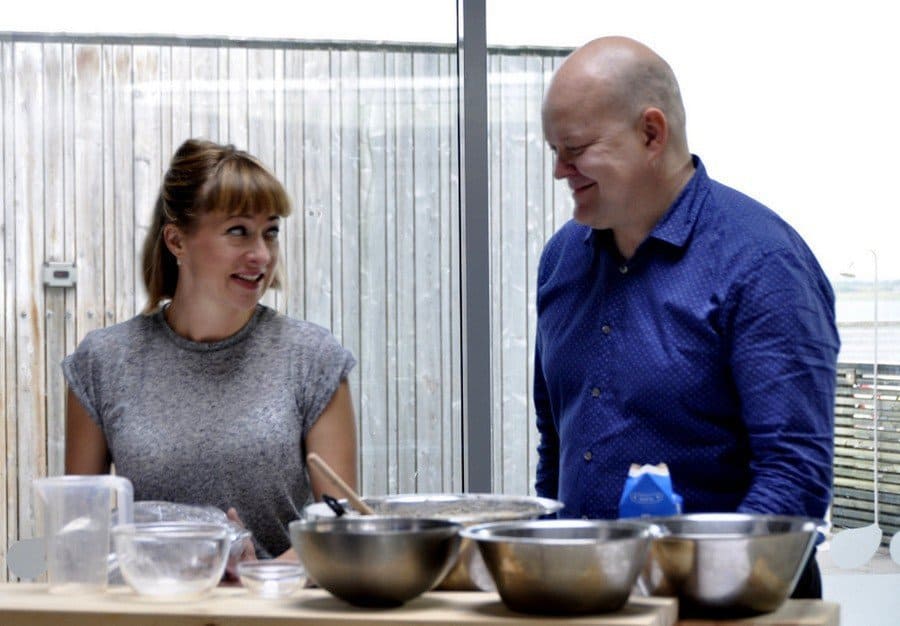 Mix together all the dry ingredients in a medium bowl. Add the milk and mix together. The dough will be very wet.

Grease a metal pot (with a lid) so the bread won’t stick when it’s cooked.

If, like me, you don't have a geothermal spring in your garden(!) Siggi suggests you bake in the oven at 120 degrees Celsius (with the lid on) for five and a half hours, or until bread is cooked in the middle.

Alternatively you could simmer in a slow cooker or crock pot around 4 hours. The bread will steam if cooking this way and you'll need to add water to the crock pot and check regularly to ensure it doesn't boil dry.

Split the dough into two and place in two medium ceramic bowls or tin cans, ramekins could also be used.  Whichever you use, tent with aluminum foil to steam the bread.

To convert to cups measurement use this converter.

As an Amazon Associate and member of other affiliate programs, I earn from qualifying purchases.


If rye flour isn’t available in your local supermarket you can buy it here. 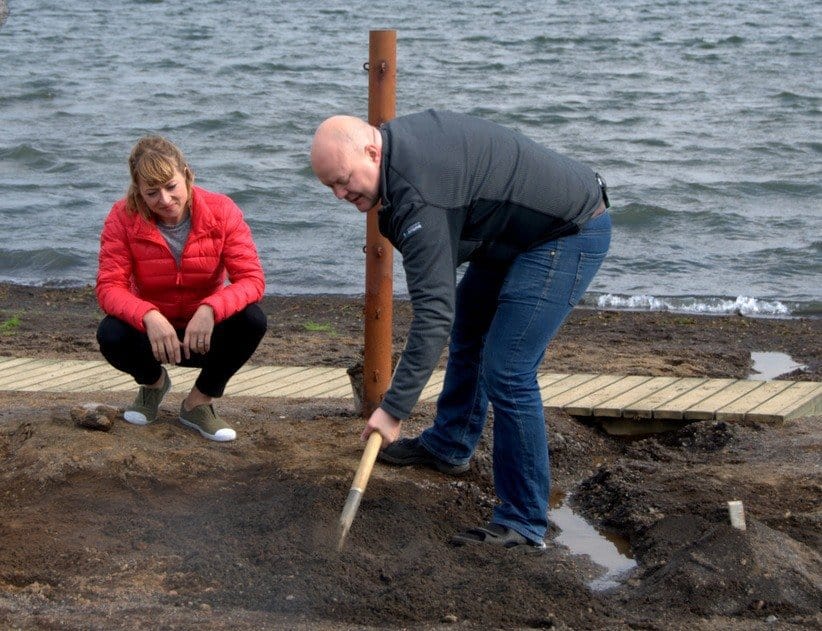 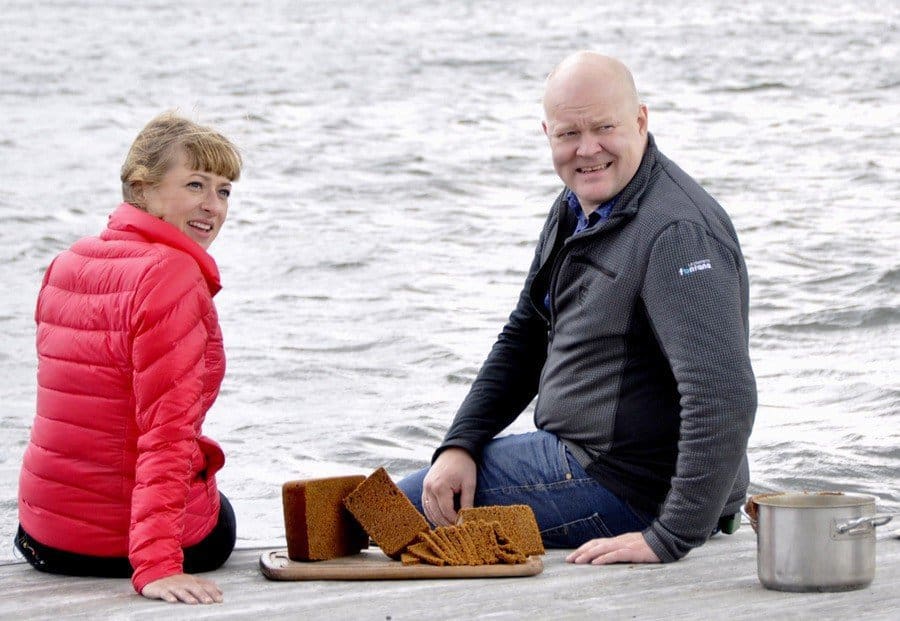 The Thunder Bread was delicious! It was very dense and almost cake-like. I ate it, still warm, without any topping – it was moist and had a faint caramel-like taste. Really yummy. If I had a thermal spring in our garden at home I’d be baking it regularly! 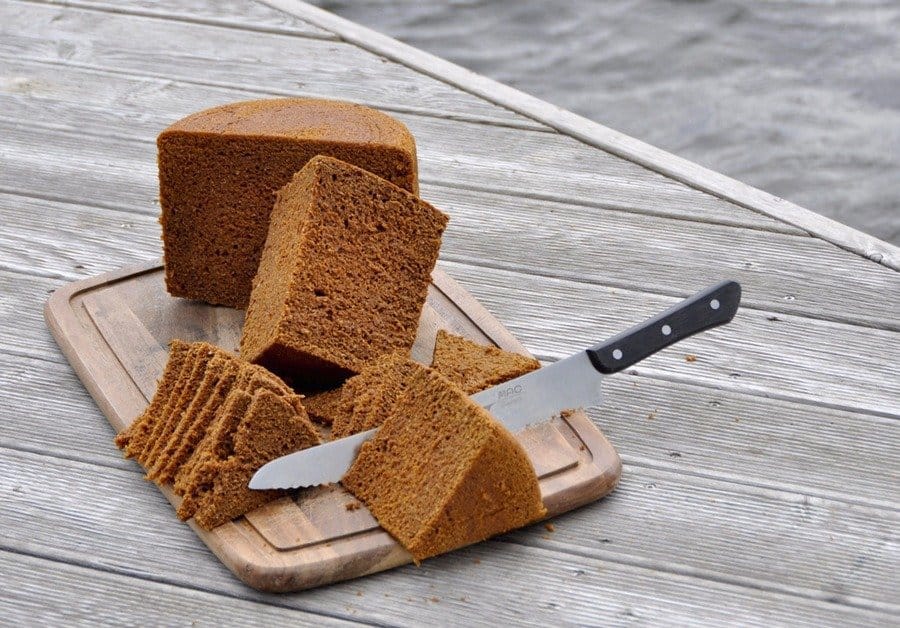 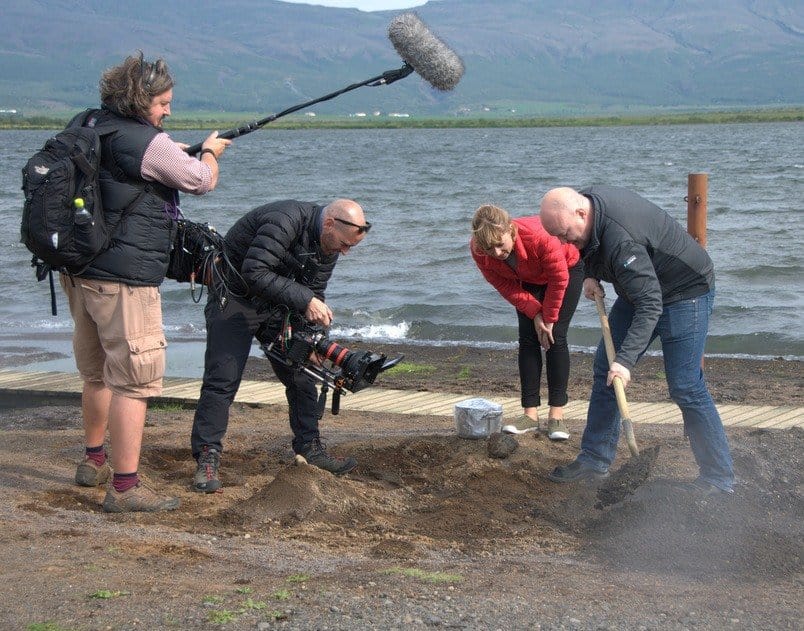 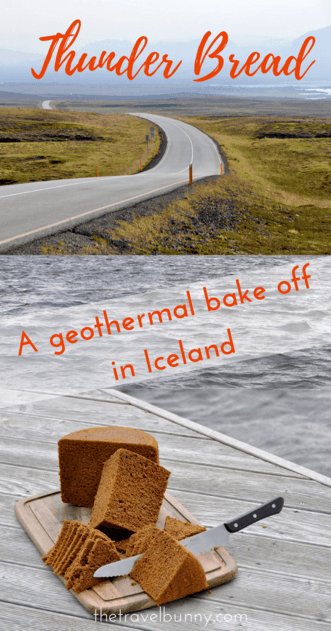 Would like to try in my crockpot? Anyone done this? Thanks

I am also waiting for someone to answer this question, please.

Can’t wait to try making this at home. We were there on Dec 18, 2021 and loved the bread. Warm with butter and the smoked trout was the best nom noms the whole trip. The meat soup in Vik was right up there, too!

Sounds like you had a great trip. The bread is so good, let me know how you get on making it at home

We went to La Fontana in 2016, but couldn't afford the prices. However, I baked the bread last night (10 hours) in a slow gas oven (100°C) and it's delicious for breakfast. It tastes better with savoury than with sweet things, and absolutely fabulous with ample amounts of salted butter. I cut back on the amount of sugar and used 125g Golden Syrup instead. I also used kefir instead of milk, and 2 tsp bicarbonate of soda instead as I didn't have enough baking powder; the colour is like chocolate cake! White rye flour does the trick very well, but I'll try a 50/50 mix wholemeal rye and white rye next time. Maybe some caraway as well...? Thx for sharing the recipe.

The thought of it with salted butter is making my mouth water. I agree it's better with savoury too. It's a while since I've made it but you've inspired me to bake it again - it'll make a change from sourdough. Thank you for sharing your tips and swaps. The caraway is inspired :)

Went to La Fontana and had the amazing bread there. I lost my recipe, so was glad to see you posted. I converted everything, including the oven temp. Bread was done in just over 2 hours in my Staub Dutch oven. The bottom was a tiny bit overdone, but it was delicious, fresh out of the oven with Irish butter! I'm thinking I might lower the temp next time. Overall, it was great and brought back lovely memories of Iceland!

Hi Beth, I'm glad you found the recipe useful. The thunder bread sounds divine with Irish butter. I'll try the recipe again and test with a lower temperature and let you know the outcome. Thank you for letting me know

Very easy and result with a great taste ! Only prepared in a normal oven.

The flavour's very different to any other bread - glad you enjoyed it :)