Cornwall, land of captivating coastlines, Celtic culture and clotted cream lies in the far south-west of Great Britain. In fact you can’t get any further south or west on British mainland as the peninsular of Cornwall reaches right out and dips its toe into the choppy Atlantic Ocean.

The Lizard is Cornwall’s most southerly point and Land’s End the most westerly – two extremities of a wildly, beautiful coastline that goes on for nearly 300 miles. 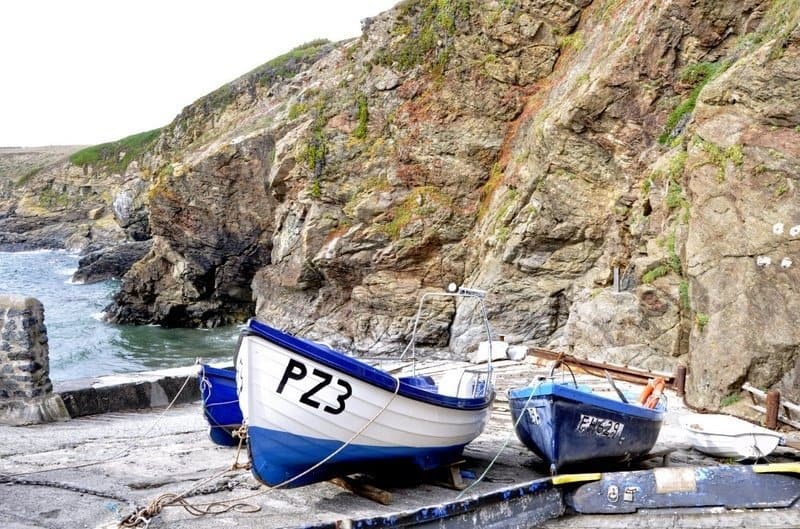 To say I’ve been tardy in not visiting Cornwall before is an understatement.  We’ve holidayed in pounding rain in neighbouring Devon and even made it as far as Plymouth. I’ve hauled the kids up the 93 steps to the top of Plymouth lighthouse from where you can almost touch the county of Cornwall but I’d never stepped foot on Cornish soil.

And now I’m annoyed with myself for leaving it so long. Too long. We spent a few days there exploring just a little part of the county on a mini road trip and it’s utterly gorgeous.

From Truro to St Ives

Our first two nights were spent in Truro for a family wedding. The wedding ceremony took place at St Just in Roseland which has got to be one of the most picturesque churches in the UK. Two miles from St Mawes, the thirteenth century church is built next to a small creek. Surrounded by sub-tropical gardens it’s the perfect setting for a fairy-tale wedding.

St Ives, on the west coast, was to be our base for the next two nights. But en route we wanted to explore some of the dramatic Cornish coastline with its hidden coves and rugged scenery. So, instead of taking a direct route across country we went the long way round via the coast.

First stop was The Lizard the most southerly point on the Cornish coastline. We parked up at Lizard Village, leaving a donation in the honesty box at the car park, and walked the half mile to the sea. It was a brisk but bright day, the sea sparkled in the sunshine and wild grasses and plants fluttered in the breeze.

If you’re thinking of spending a week in the county then this Cornwall road trip itinerary ticks all the boxes. 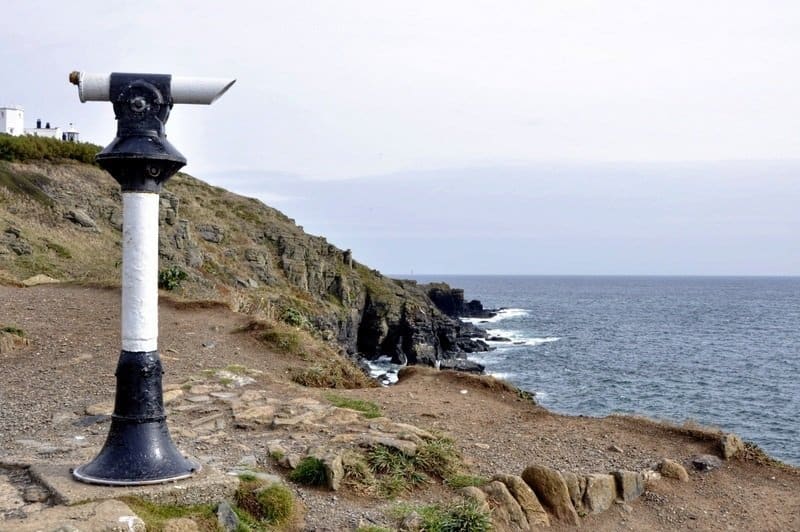 There’s an old lifeboat station at Polpeor Cove, just a few minutes’ walk from the Point, which was in use from 1914 to 1961.  A state of the art lifeboat station is based half a mile away at Kilcobben Cove today and it’s essential.  This westerly approach to the English Channel is one of the busiest shipping lanes in the world with up to 400 ships passing by every day. 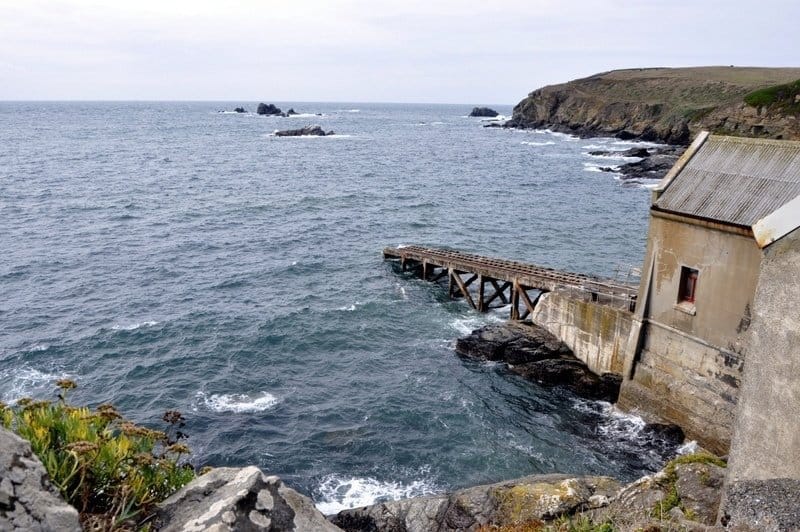 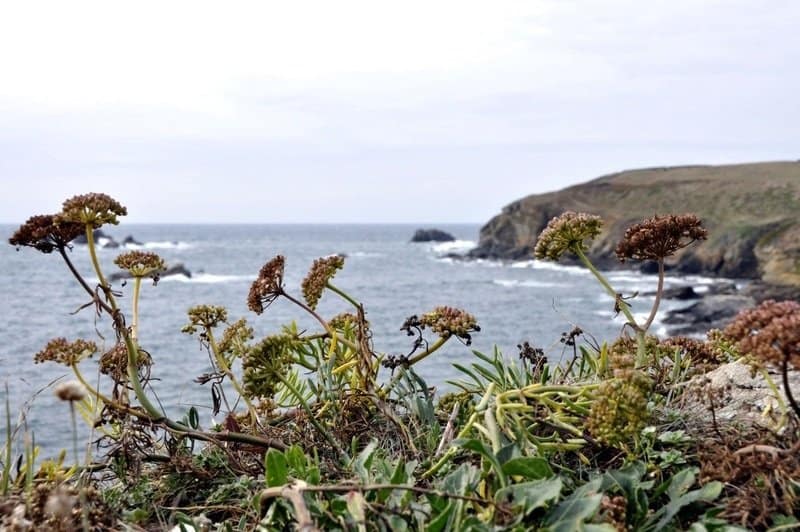 Two miles north from The Lizard, and a scenic walk if you have time, is Kynance Cove, said to be one of the world’s most beautiful beaches. It looks most gorgeous on a sunny day at low tide when the white sands gleam all the way to Asparagus Island (love that name!) and the turquoise water laps against the red and green serpentine rocks and offshore stacks.  When we arrived the day was becoming increasingly blustery and grey and the tide was high.

Despite the weather and a darkening afternoon the cove was stunning but still showed a hint of turquoise in the swirling sea.  We parked up at the cliff-top car park, paid our £3 and were advised to take the right-hand path which leads down to the beach and the café. This was the steepest but fastest route and we’d make it down before the waves covered the beach completely. We got some dramatic views on the way down.

Kynance Cove is one of the most beautiful places to visit in Cornwall. 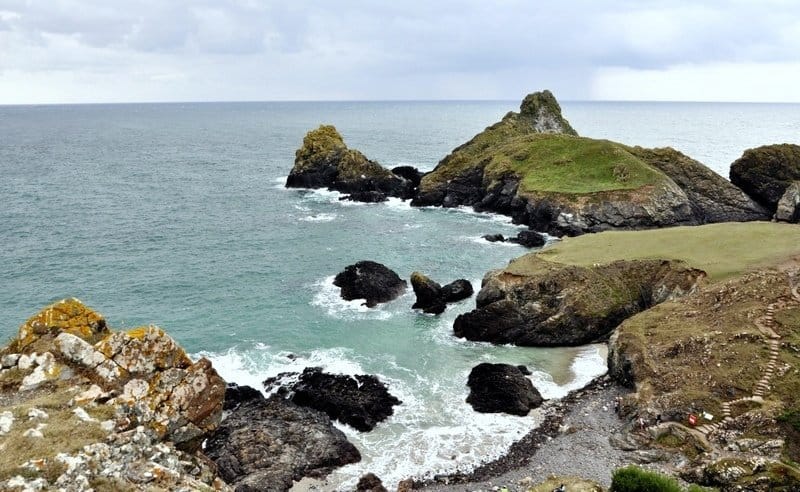 It was wild and woolly and the wind whipped our faces as we walked but I loved that we saw a rugged, invigorating, windswept side to the cove.  At low tide it’s possible to cross the beach next to the caves and climb back up to the car park via another cliff path.

By the time we got there it was just a narrow slither of sand and every few seconds another wave would rush at the rocks. We considered legging it across but eventually went back the way we came to avoid a good soaking. We’d have got wet either way because the rain let rip just before we made it back to the car.

Check out some of the best days out in Cornwall 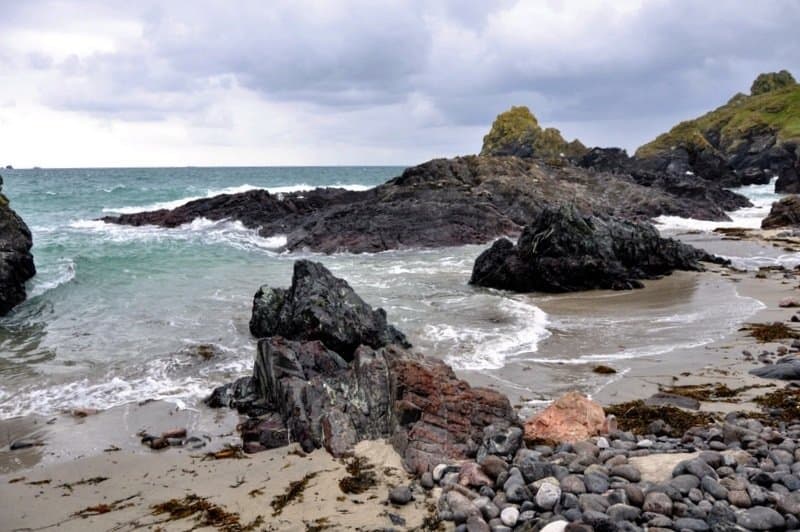 The Minack Theatre at Porthcurno

We carry on westwards towards Penzance and Porthcurno where The Minack Theatre is carved into the cliff-face. Minack means ‘rocky place’ and the open-air theatre overlooks a dark rocky crag and gully far below.  The perfect dramatic backdrop. 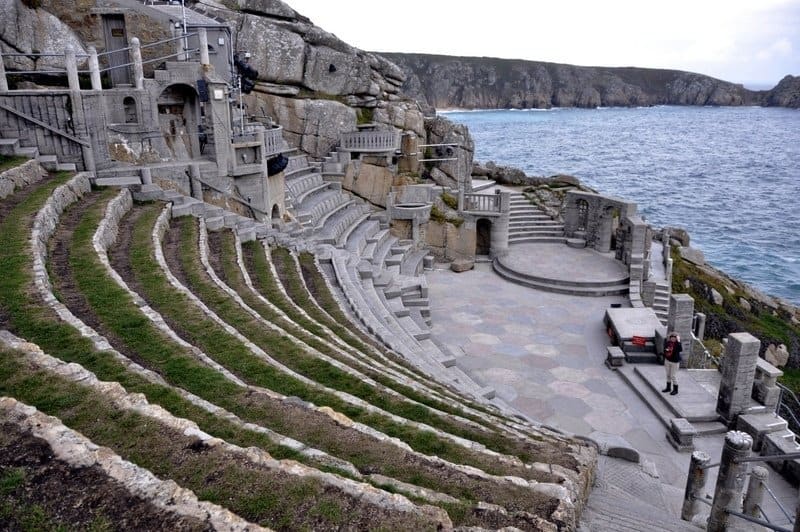 I’d always thought the Minack was an ancient theatre built hundreds of years ago but a fascinating exhibition tells the story of a remarkable woman, Rowena Cade, who breathed life into the theatre.  This slight woman, together with her gardener and his friend built the theatre with their bare hands over many years.  When the cost of granite become too much they devised a technique of using concrete and she carved elaborate Celtic designs into the blocks.

The first production was The Tempest staged in 1932 but the theatre carried on evolving and Rowena worked on it year on year until she was well into her 80s.  Sub-tropical gardens add to the beauty of the theatre whose season runs from May to September. 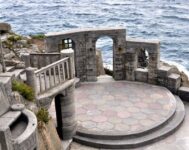 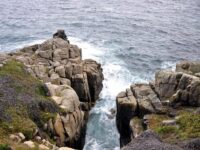 Just a short drive of 4.2 miles from The Minack is Land’s End – the most westerly point on the English mainland and our final stop off before heading for St Ives. In Greek times Land’s End was called ‘Belerion’ – place of the sun.  When we arrived it was anything but. We paid the usual car par fee and headed down to the cliff edge and stood as near to the end of Land’s End as we dare. The 200ft cliffs face the full force of the elements with dramatically atmospheric views. 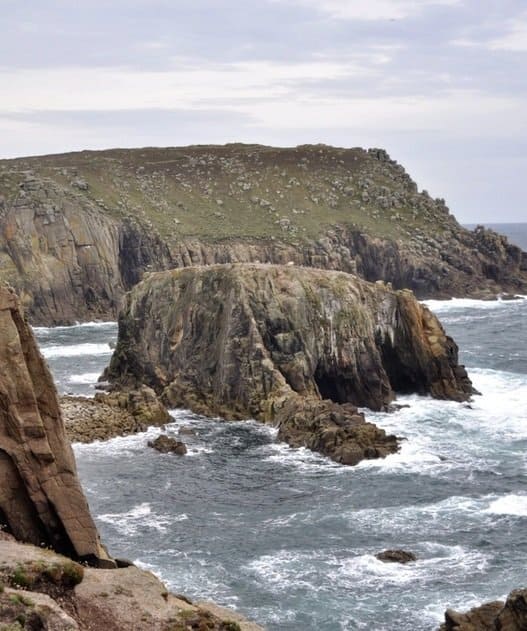 The raging sea was in full fury crashing into black granite outcrops and spraying high into the air before being gusted away by the wind. I’d love to go back and see the south Cornwall coast in summer. We braced it out for about half an hour before seeking out the famous Land’s End signpost – John O’Groats 874 miles, New York 3,147 miles. Ironically New York will be the next trip I take. 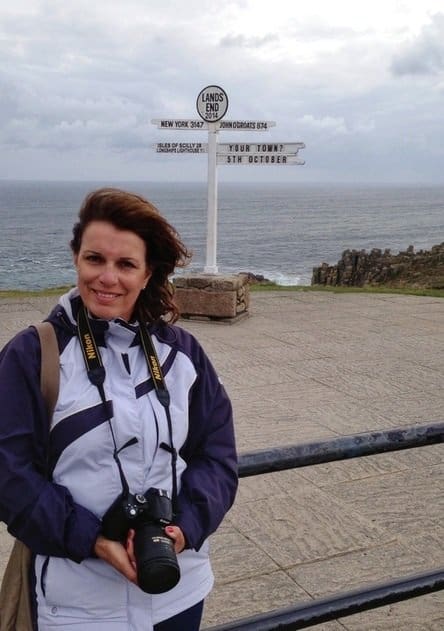 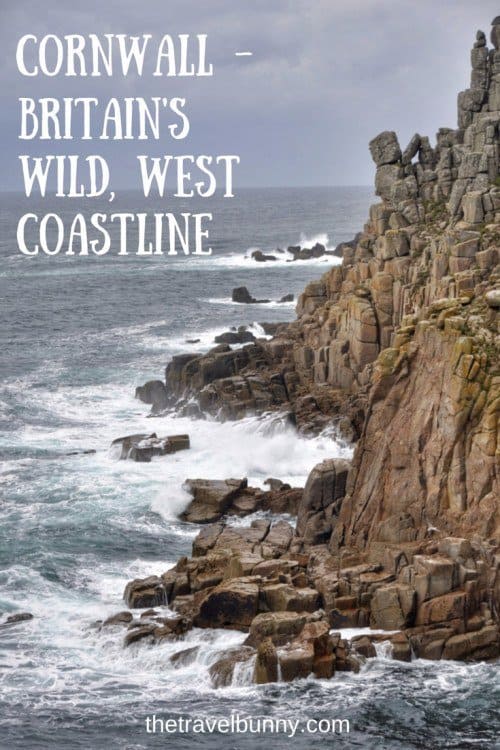 Danial (Dan On The Road)

A coastal road trip to Land’s End is high on my list for my next trip to the UK. Every stop, beach and town looks magical!

Even though we went in autumn we had a mix of good and bad weather - the coastline is stunning come rain or shine. The little towns and villages en route are too pretty :)

[…] saw my first visit to Cornwall for a wedding and time for exploring its wild and rugged coastline.  We stayed in St Ives which is the perfect English seaside town.  We will definitely be heading […]

Cornwall is one of my dream destinations. This just confirms that I need to go!

This was my first trip to Cornwall and I'll definitely be going back - loved it!

Looks beautiful! I guess hats are not to be trusted to stay on heads, though :)

You wouldn't wear your best hat there!