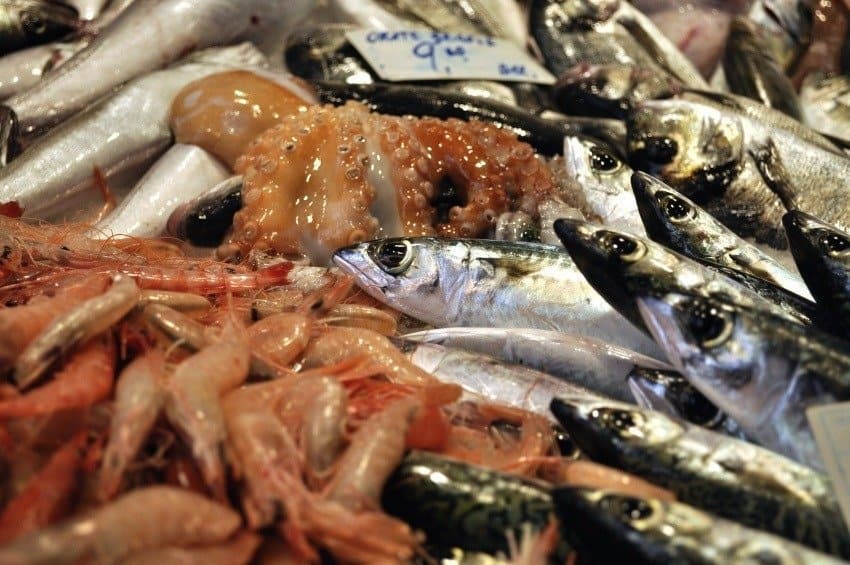 A food tour through Catania Market

I was in Sicily with fellow blogger Lucy from ‘On the Luce’ to check out one of Ben Fogle’s new ‘Great Adventures’ shore excursions for Celebrity Cruises. The Sicilian Gastronomic Experience. We’d spent a day exploring Catania and were now to take a journey into Sicily’s culinary heart with a tour of Catania Market.

Afterwards we’d be heading to a small village on the slopes of Mount Etna and to Eleonora Consoli’s kitchen. We were to take part in a cooking class, put together by gastronomy journalist Eleonora. We’d learn about the secrets of local cuisine and the culture, traditions, and customs of Sicily.  But more about that later, because now we’re going back to that fish market. 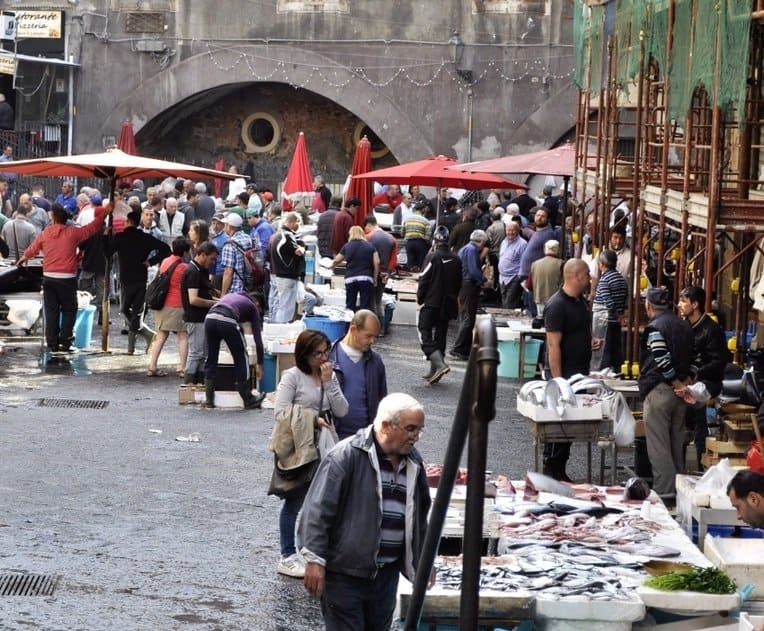 La Pescheria sits just off Piazza Duomo near the fountain, Fontana Dei 10 Canali, which is fed from the city’s underground canals.  Many years ago the water was diverted to form an overground  curtain of water which has been utilised by the market traders ever since.  Step behind the fountain and you’ll find a terrace which overlooks the main arena of the fish market.  People stand to watch because there’s so much to see –  it’s early morning and La Pescheria is in full swing. 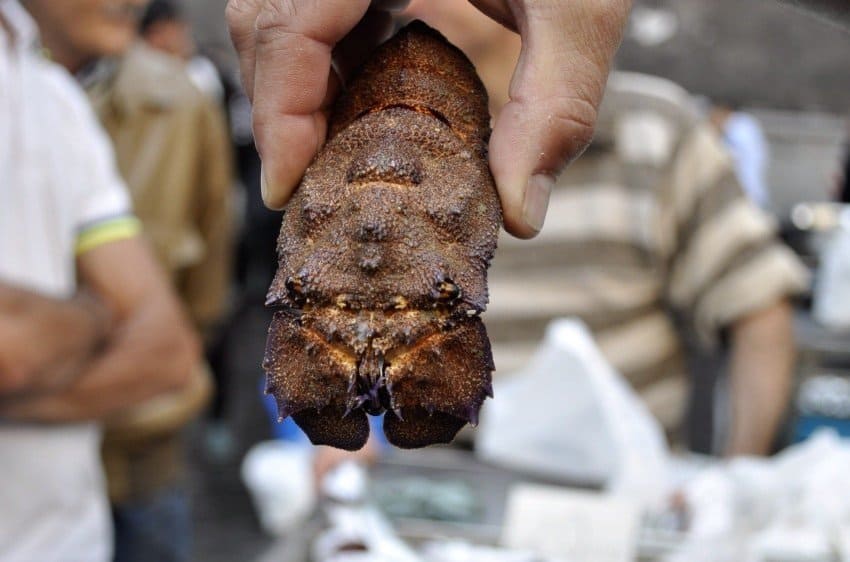 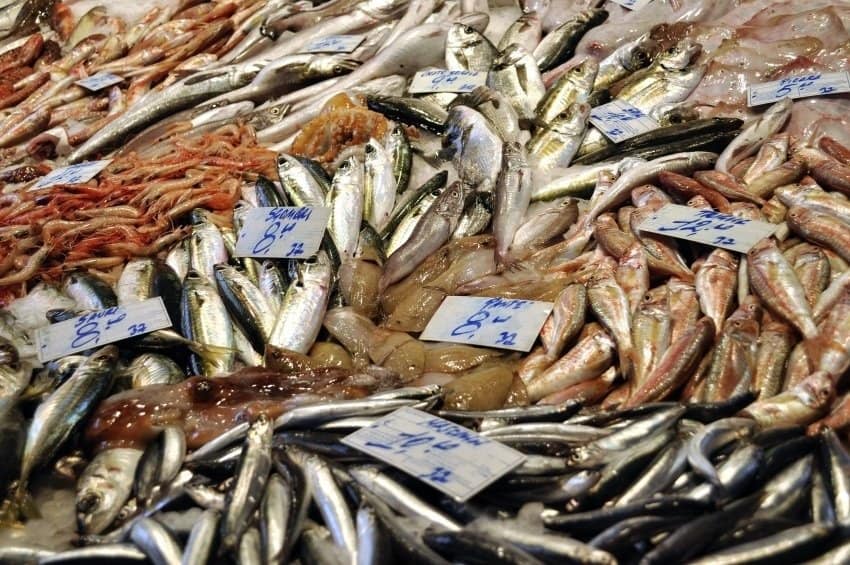 The fishermen hawking their catch of the day are as friendly as they are loud and as we toured Catania market with Maurizio, our guide, they didn’t hesitate in bringing their wares to our attention.  A squirming octopus was held up for inspection – would that fit in Lucy’s handbag? – probably not but the stall-holder was ready to try!  Some fish were so fresh they were still flipping around and crustaceans crawled their way over one another in a bid for freedom.  Bright tarpaulins protected the fish from the sun and shaded the stallholders who carefully prepared the fish.  Trays of silver sardines lay on piles of crushed ice, huge swordfish and tuna steaks sold alongside gleaming squid, prawns and more kinds of fish than I’ll ever know the names of.  And that was just the start… 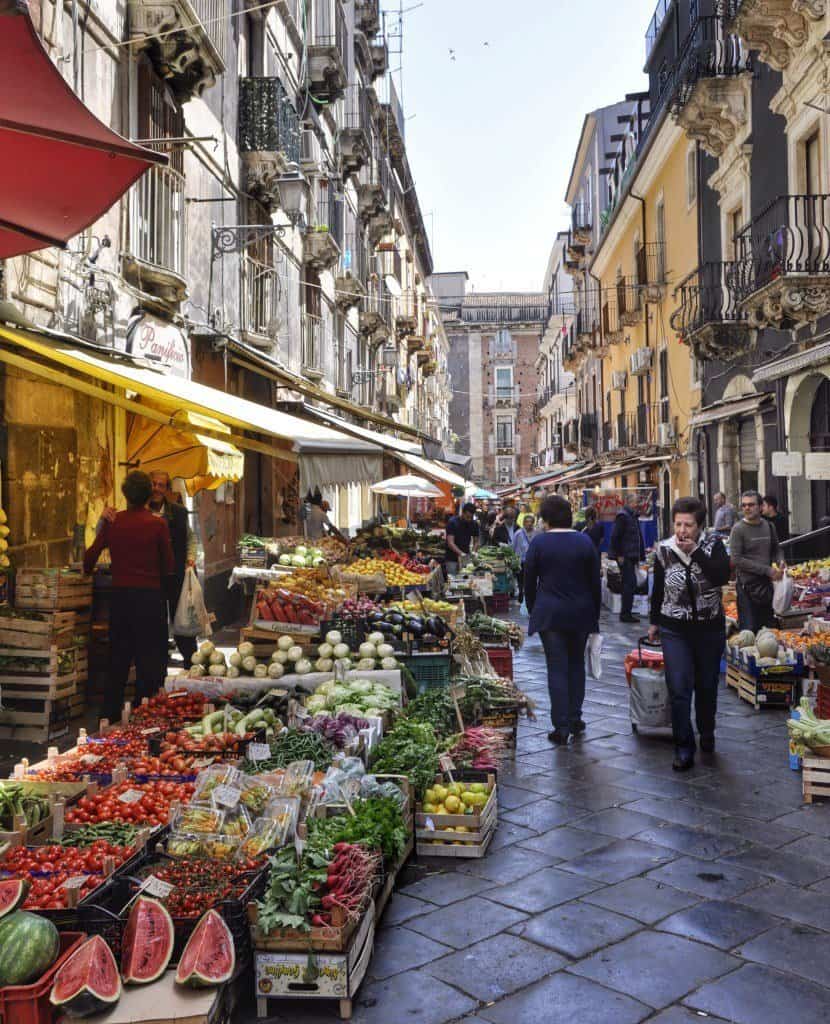 A warren of narrow streets leads off from Catania’s fish market leading to alleyways full of colourful fruit and vegetable stalls, meats cheeses, dried fruits, nuts and spices.  As we turned into the fruit and vegetable area of the market the vibrancy and colour hit us full on. 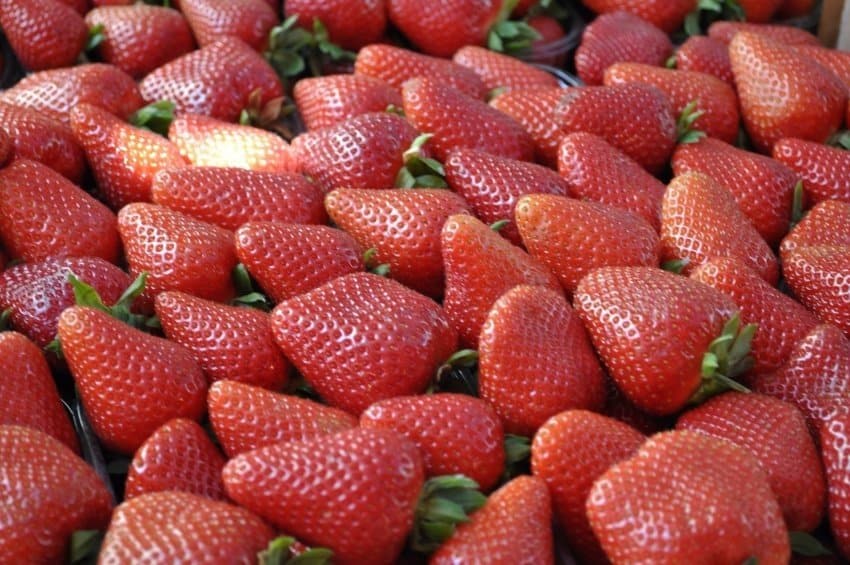 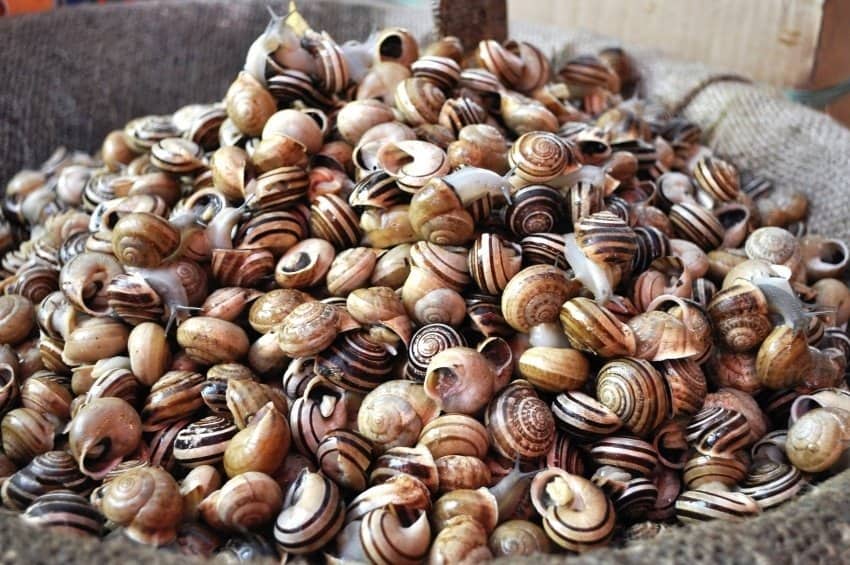 Snails for sale in the market 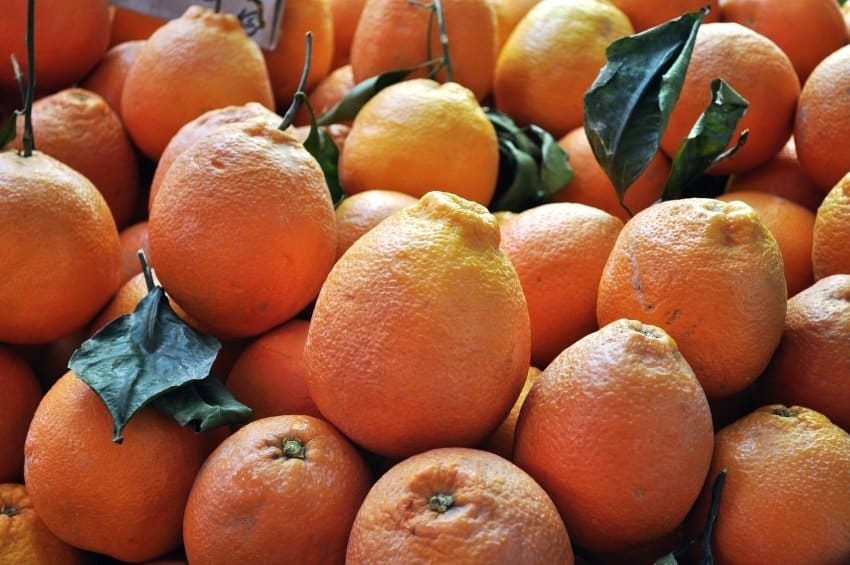 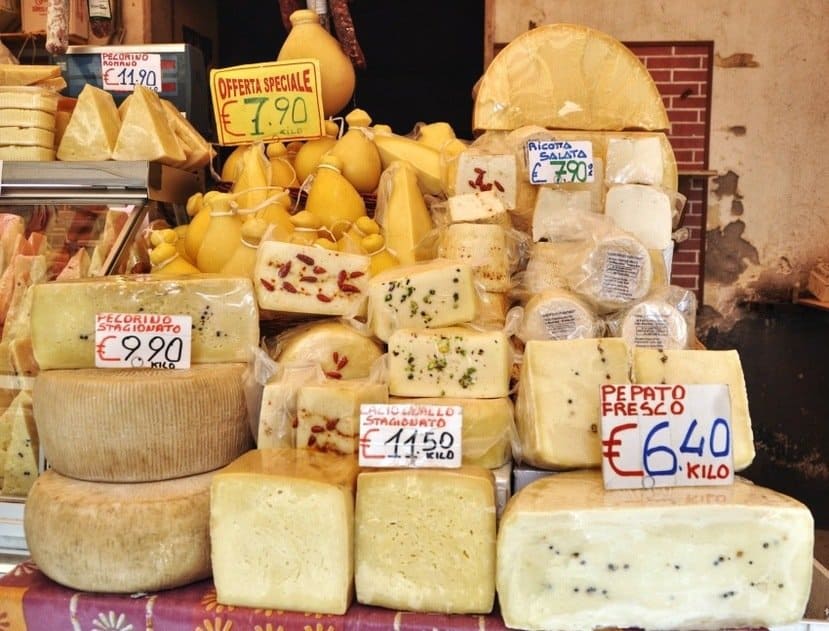 A Selection of Sicilian Cheeses in the Market

Maurizio told us that all the food in Catania market was seasonal and grown locally in the fertile volcanic soil of the island and was as fresh as you could get. From the way he talked it was obvious he was passionate about food, both eating and cooking it.  He told us about the different influences over the years that have changed the way Sicilians eat; from  occupation by Greeks, Romans and Spanish to the North Africans and Arabs. 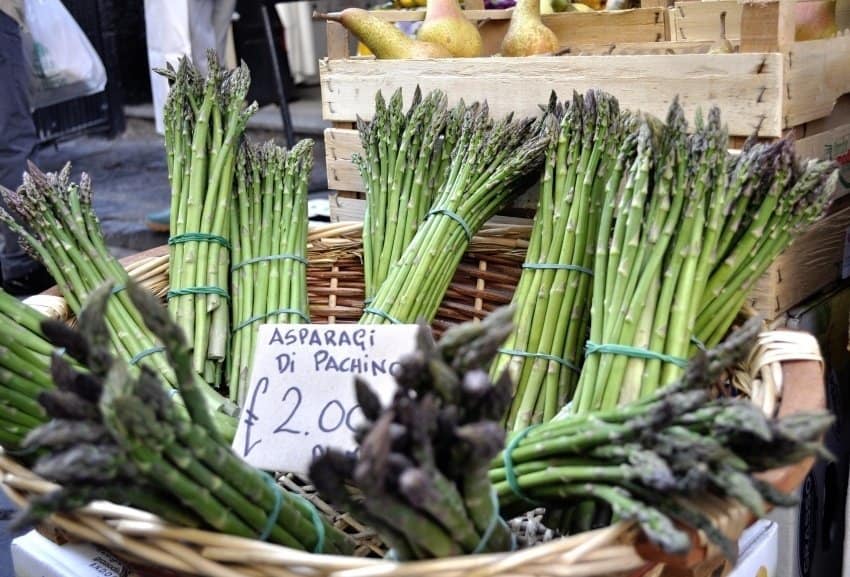 Fresh Asparagus from the fields 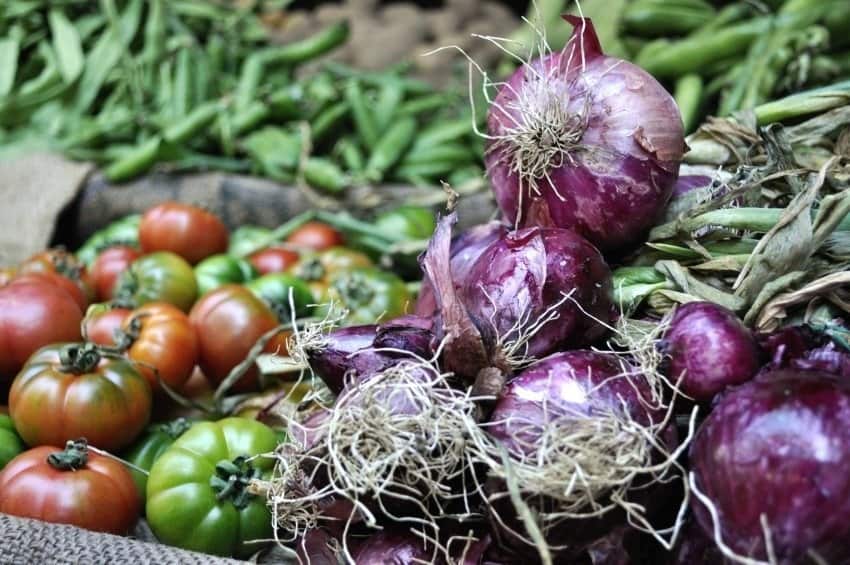 We found some small green spiky plant heads that looked like thistles.  They were grilled wild artichokes and we peeled off the soft part of the small leaves and chewed on the deliciously earthy flavour.  The stallholders were happy for us to have a taste. 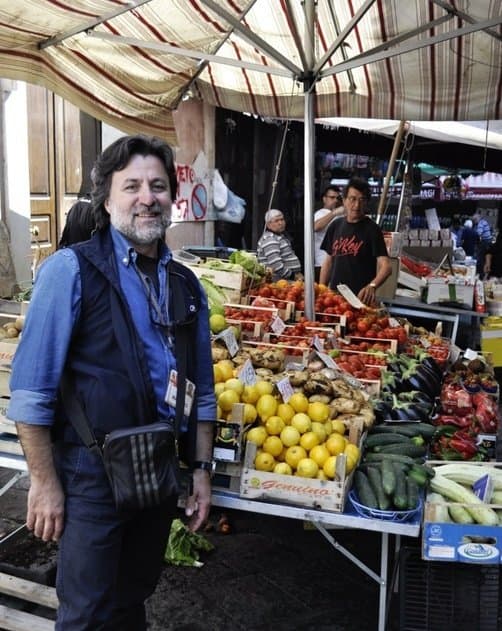 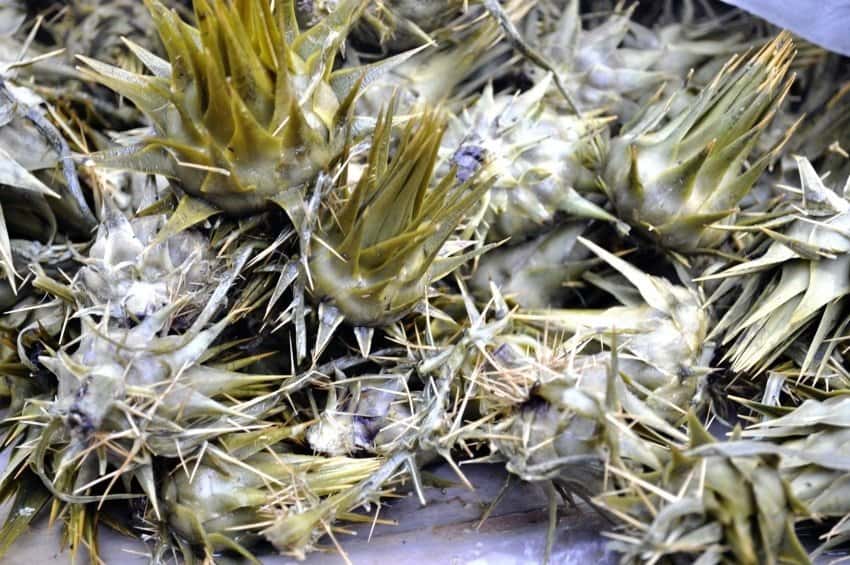 A tray of wild artichokes 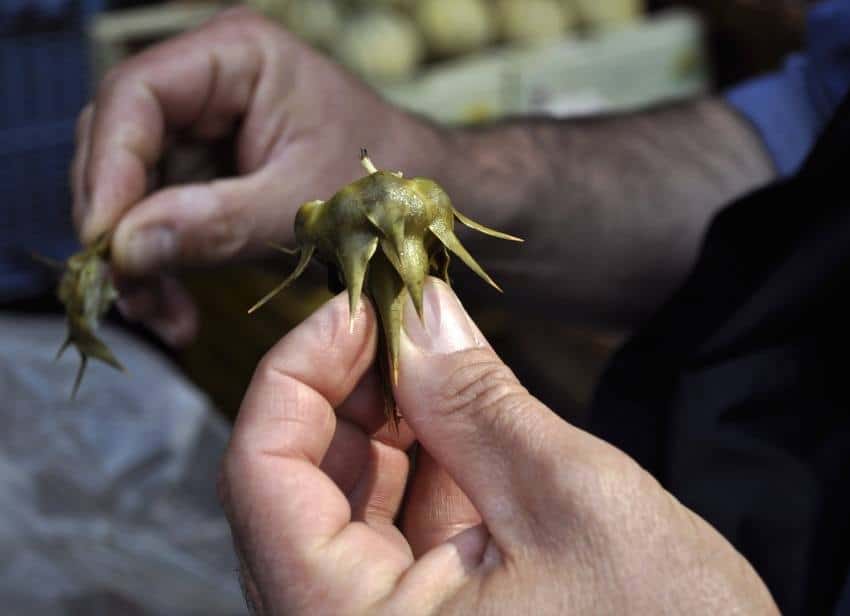 Spices, dried fruit and dates are a legacy from when the Arabs occupied Sicily and we met Theresa Drago who plied us with salted almonds and delicious Mostarda di Mosto a chewy, caramel-like sweet made from grape must, cinnamon and ground nuts.

Sun-dried tomatoes drenched in olive oil were juxtaposed with bright green and black olives. Knots of garlic warmed in the sun and baked caramelised onions caught my eye.  Baked for 2.5 hours at 220 degrees and picked at around the table after a meal.  Food for sharing.

I adore the chaos and bustle of a lively market and Catania’s was a cornucopia of colour, flavours and atmosphere but we couldn’t stay any longer.  We had a meal to prepare in Eleonora Consoli’s kitchen where we’d learn how Sicilians put the heart and soul into their food…

We stayed at the 4-star Una Hotel Palace. The contemporary hotel, housed in a historic building, was perfect for our stay as it’s located right in the heart of the city. Rooms had a Baroque style and were very comfortable with air-conditioning and elegant décor. The thing I loved best about this hotel was the rooftop garden with fabulous panoramic views of Mount Etna and the city’s rooftops. This was the venue for breakfast (10€ supplement) and a great spot for evening drinks which came with an array of complimentary traditional Sicilian nibbles like cannolo and arancini.

The railway station is 2.5km away and the Fontanarossa Airport just 6km from the hotel. 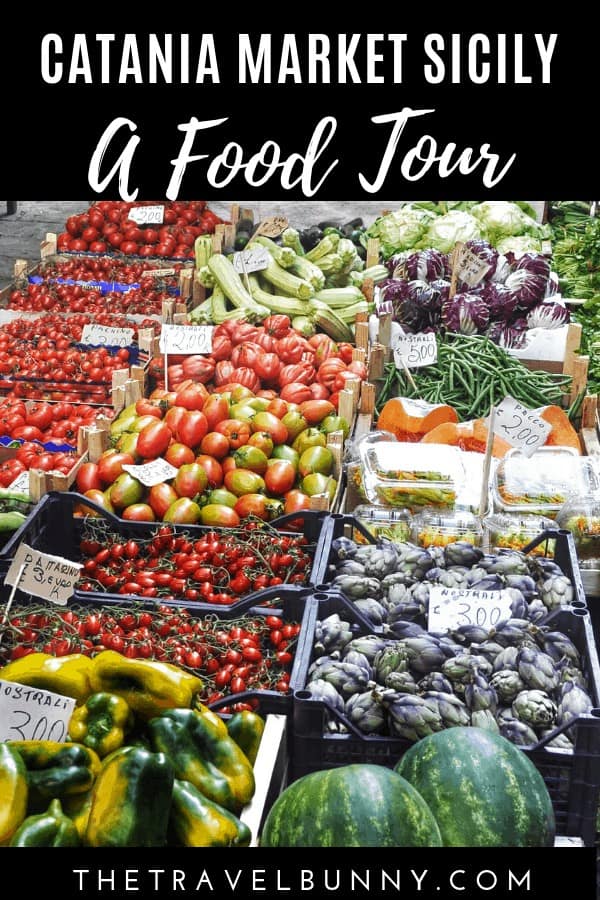 Do you like food markets?  Do you have a favourite?

Wunnerful! I'll be there in August and was wondering if like so many glorious markets, you can eat there as well..an particular favorite is the Oaxaca market where you can do just that and all but have your taste buds and top of your head fly off! Fabuloso! So hope you will say 'yes, you can!' I have a cooking school in Marrakech..

The main piazza is next to the market where there are lots of cafes and restaurants. The food in Sicily is so good - try the local dish - Pasta a la Norma... Delicious!

Could you tell me, the market is open everyday? Or only in special days at special time?

The market shuts at 12 noon or just after.

[…] love the idea of the Sicilian Gastronomic Tour.  Imagine a visit to Catania’s marketplace, choosing your produce and learning how to cook it with celebrated Sicilian gastronomy expert […]

[…] following day, during our tour of Catania’s La Pescheria and marketplace, our guide took us to the café next door to Caffe del Duomo. I hadn’t even noticed it the day […]

12 favourite food markets around the world - Travel with Kat

[…] I love Italian cuisine and have enjoyed exploring a number of food markets there so I was interested in seeing how they compared to this one on the island of Sicily from friend and fellow food enthusiast, Suzanne Jones, The Travelbunny. […]