The cool, calm, quiet of the Consoli kitchen is in complete contrast to the clamour of Catania’s colourful market. We explored the market as part of our Celebrity Cruises Sicilian Gastronomic Adventure and the next part of the tour was to immerse ourselves into the flavours, cooking customs and rich history of Sicilian cuisine.

Where better to do that than in the kitchen of a family whose recipes and cooking techniques have been handed down through the generations from mother to daughter again and again. Eleanora Consoli’s kitchen. 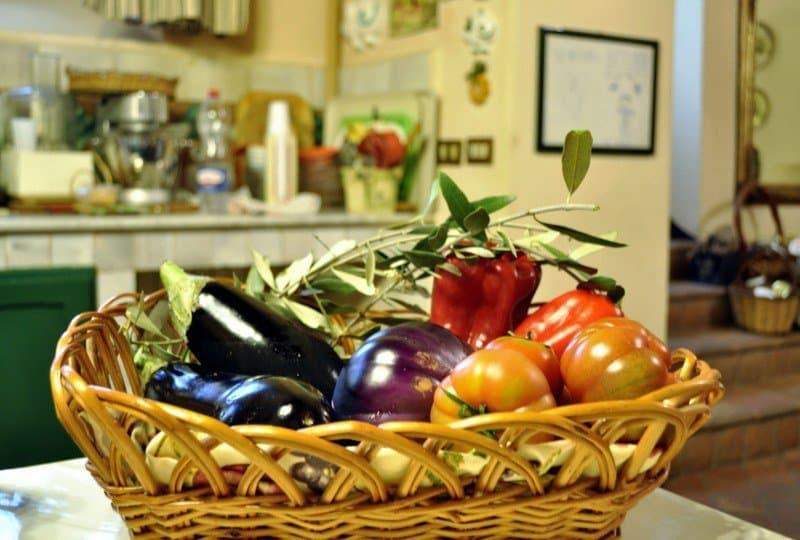 A Basket of Sicilian Produce ready for cooking

The drive from Catania’s market into the countryside passes through olive groves and fields of lush produce to the fertile slopes of Mount Etna and the small town of Viagrande. A simple green gate leads to an aromatic garden filled with herbs and lemon trees heavy with fruit and we entered the beautiful 18th century villa to be greeted by Monica, Eleanora’s daughter. 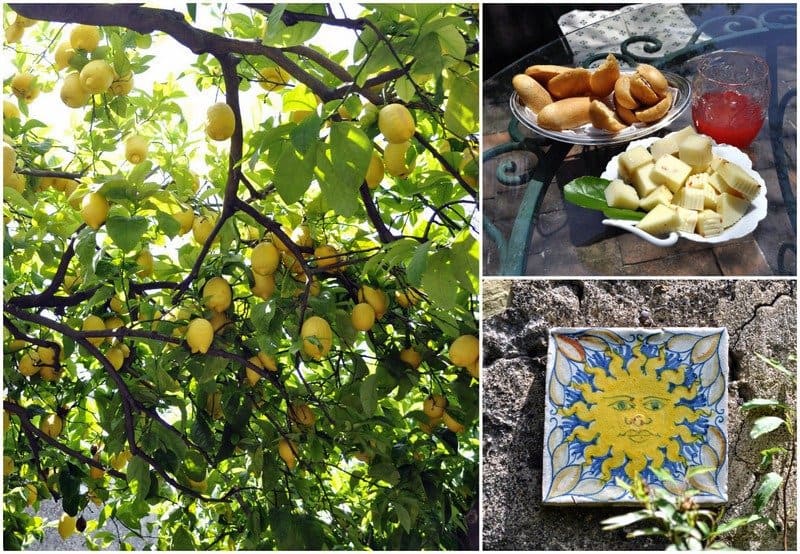 Aperitifs in the Garden

Eleanora is an authority on Sicilian food and cuisine, author of many cookbooks, newspaper columns and TV appearances and she would usually host our cooking class but today Monica would be our Sicilian gastro guru.

Inside a Sicilian Kitchen

Sicilian cuisine is as rich in history as it is in flavour and reflects the influences of many invaders over the centuries. Apricots, rice, dried fruit, and spices from the Arabs and hearty meat dishes from the Normans to tomatoes from the Spanish. Despite these outside influences, Sicily has preserved its unique identity through its traditions, fresh seasonal ingredients and simple, sublime flavours.  Although the island is part of Italy the Sicilian people proudly state ‘Sicilian first, Italian second. There’s a huge choice of great food to eat in Sicily.

Food is important to Sicilians and as Monica talked us through each recipe she’d weave through it Sicilian traditions, cooking tips and a large measure of character.  So what dishes would Monica be cooking up for our Sicilian Feast? 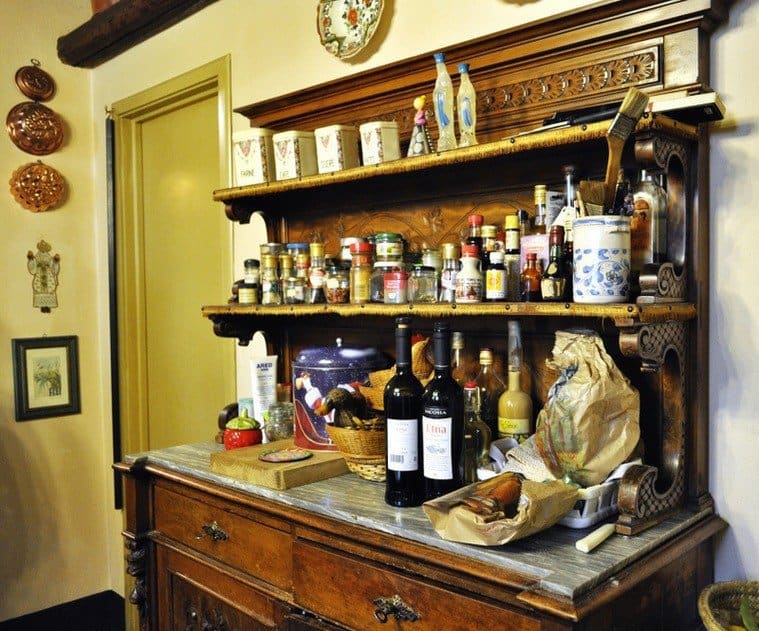 A dresser full of condiments

We all sat around a large wooden table and watched as Monica prepared the first main dish; Polpette alla Siciliana or Sicilian-style meatballs. This is made with minced veal, breadcrumbs, used to make the dish go further in hard times, grated caciocavallo (or parmesan) cheese and an egg to bind.

This is all blended together with bare hands and chopped parsley or basil, salt, pepper and grated lemon zest. Some of the meatballs were wrapped in lemon tree leaves, which added to the delicate lemony taste, before being griddled until browned.  See recipe at the end for more detailed instructions. 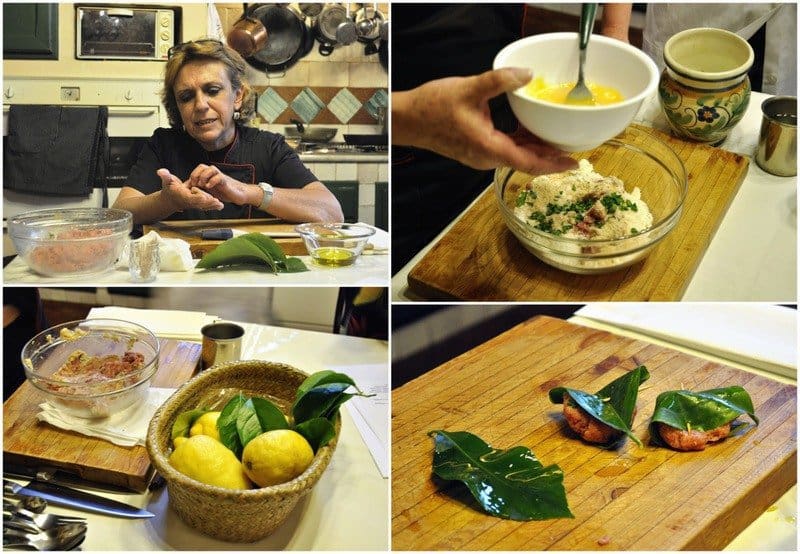 Another way of serving this dish is ‘Spitini’ or skewered with croutons and fresh cheese. Monica reminisced about the times when her Grandmother from Palermo cooked Spitini; happy memories of Sicilian family feasts.

Monica’s Tip: Use older lemons – they have a better intensity and are not as bitter as younger fruit.

The second dish we were to sample was Pasta alla Norma a Sicilian classic dish and named after Cantania’s Vincenzo Bellini and his opera ‘Norma’.  A divine combination of pasta in tomato sauce, fried aubergines (eggplants), basil and ricotta salata cheese.  Ricotta cheese will do but to get the authentic Sicilian flavour ricotta salata is so much better.

Monica adapted this recipe slightly using rice instead of pasta to produce a gluten-free meal so we had a slightly different take on the dish and in the process learnt to cook rice perfectly. 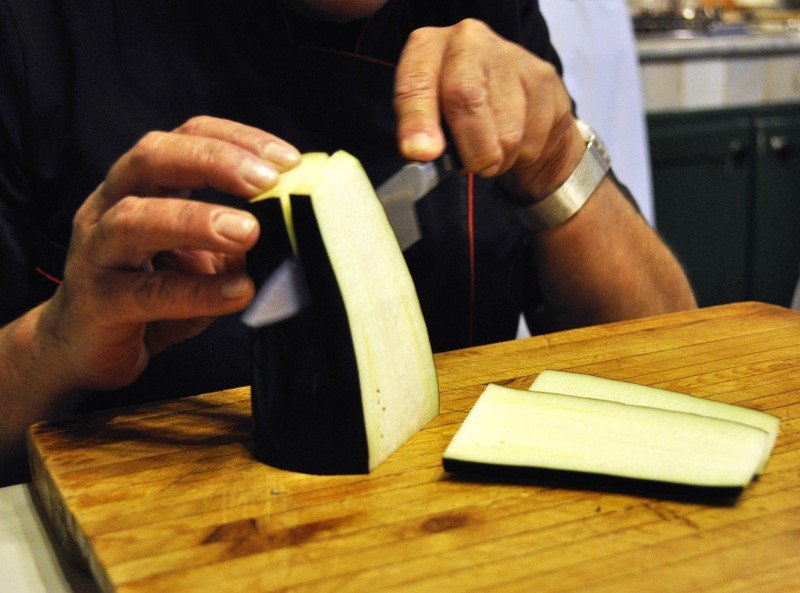 Monica’s Tip: Use the silky black-skinned aubergines for the best taste and crisper skins.  Slice the aubergines length ways in the direction of the fibre and not into rounds to fry – this way they absorb less oil and are crisper without taking on a spongy texture.

The tomato sauce that goes with this dish was delicious and every woman in Sicily has her own way of making it i.e. ‘the best!’  Monica showed us how to make a basic sauce. To blanch the tomatoes cut a cross in the top, put into piping hot water for a minute and then straight into cold water. The skins will then slip off easily.  Monica removed the white part of the tomato but kept the runny part in the middle with the seeds; ‘where seeds are the life is’ and therefore the tastiest part.

8-10 chopped tomatoes are cooked in a pan with a little salt until reduced, add pepper, a garlic clove (centre shoot removed), 4 tbsp extra-virgin olive oil and simmer. Etna lava is similar to cooking tomato sauce – just imagine that steaming, red sauce bubbling away. The smells coming from the hob at this point were mouth-watering! 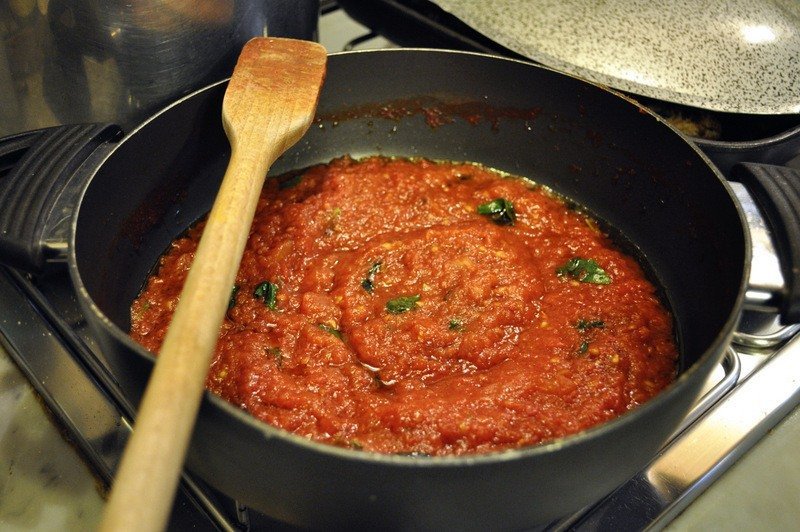 How to Cook Pilaf Rice the right way

To cook the Pilaf Rice place the rice in a deep frying pan, coat in extra-virgin olive oil and heat for a few minutes.  Cover with water and add a pinch of salt but don’t stir the rice at all.  Only when the rice is cooked can you lightly mix with a fork.  This was the best rice I’ve tasted; not only was it delicious but I could feel the texture of every soft grain on my tongue without the slightest hint of mushiness.  Just wonderful – I never thought I’d find myself enthusing about a few grains of rice! 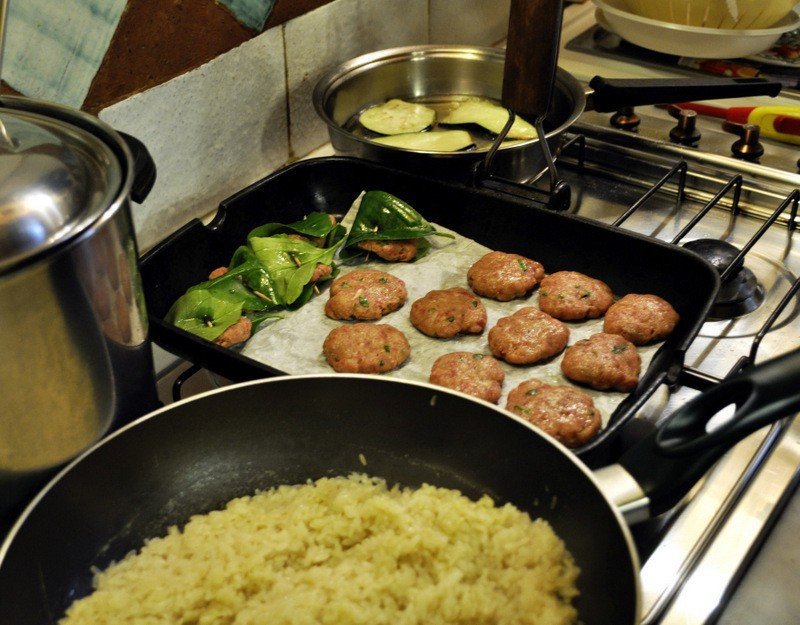 Cooking the Pilaf Rice and Meatballs

We were to have two side dishes with our meal; the first, Insalata di Pomodoro e Cipolla, a straightforward tomato and red onion salad seasoned with olive oil – ‘don’t hold back on the oil’ – salt, pepper, oregano and fresh basil leaves all mixed together.  In fact the more mixing the better and to make the best salad it should be ‘mixed by a pig!’ 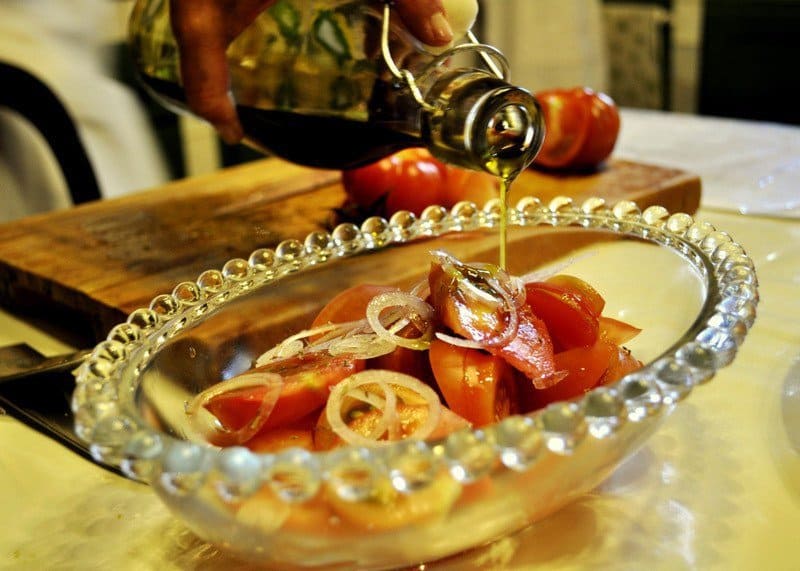 Monica’s Tip: Soak the chopped onions for half an hour in salted water, rinse and strain for a softer taste.

The second side dish was Peperonata Agrodolce or Sweet and Sour Peppers Sicilian Style a dish with a heavy Arabic influence.  At this point Monica asked us ‘do you know how to make vinegar?’  I admit I’ve never considered this before and must have looked a bit blank.  So Monica told us how – and it sounded pretty easy.  Start with a dried fava bean (broad bean) which you put in a glass jar, add some good wine and leave in a cool dark place for one month.

During this time the bean starts the fermentation process and the ‘mother’ of the vinegar, a gelatine forms in the base of the jar. When the vinegar is ready take what is needed for your recipe and top up with wine. Now and then another bean is added as ‘mother needs to eat!’ Sicilian women pass a piece of ‘mother’ down to their daughters; Monica’s had been passed from her Mother and hers from Monica’s Grandmother. The making of vinegar, and yeast for bread, in Sicily is a ‘symbol of eternity’ passed on from generation to generation – the essence of Sicilian cuisine. You can find a detailed recipe for Sweet and Sour Peppers at the end of this article. 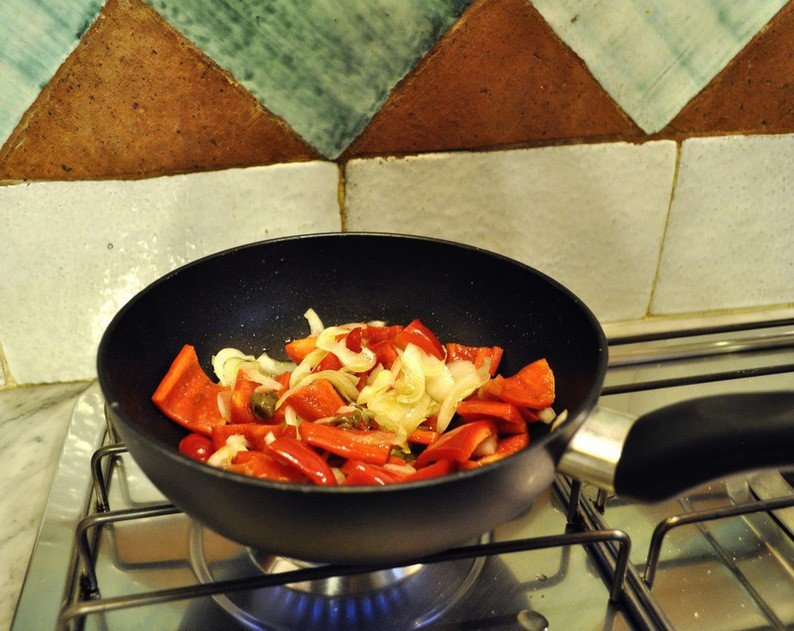 Monica’s Tip: Make the sweet and sour peppers the day before to let the flavours marinate and serve at room temperature.

No Sicilian meal would be complete without dessert; Sicilians love their pastries but today we would be eating a healthier option.  Cinnamon Jelly or Gelo di Cannella.  This was a very simple recipe containing 1 litre water, cinnamon, 200g sugar and 80g of wheat starch (corn flour or rice starch could also be used).

After bringing the cinnamon to the boil in the water, cook for 5 minutes and leave to cool and infuse for ten hours or overnight.  Next day mix the sugar with the starch and stir into the cinnamon mix being careful not to form lumps. Place over a moderate heat and bring to the boil stirring constantly. Remove from the heat and turn into a mould (rinse the mould with water to stop sticking).

Refrigerate until firm and serve. Watermelon pulp, lemon zest, coffee or chocolate could be substituted for the cinnamon but I really enjoyed the flavour and the smooth texture of the jelly as we had it.

Sitting down to Lunch

After all Monica’s hard work it was time for us to eat.  I enjoyed the food all the more for understanding first-hand the unique elements that go into Sicilian cuisine; the civilisations that have influenced the island’s taste-buds over the centuries; the simplicity of seasonal, local ingredients and the traditions and cooking techniques passed down through the generations.

After enjoying aperitifs in the garden we sat in the beautiful family dining room to savour the flavours of our Sicilian feast and in every mouthful I could taste the Sicilian sun and how the people of this small island put their heart and soul into their food. 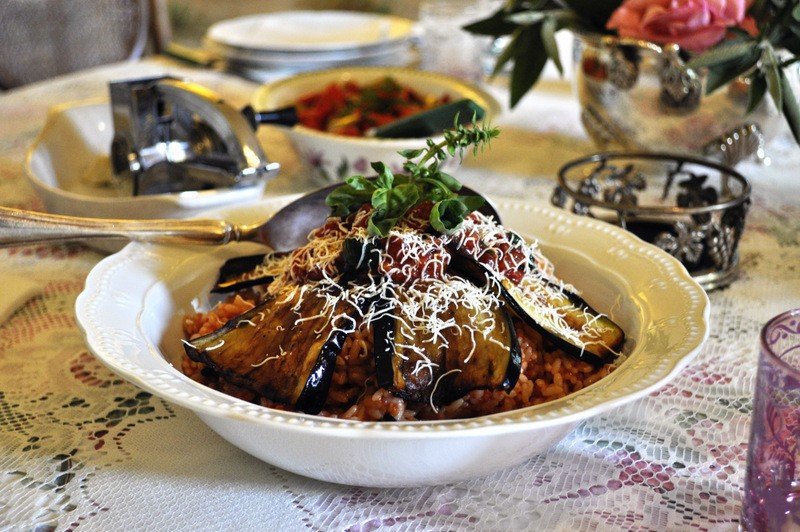 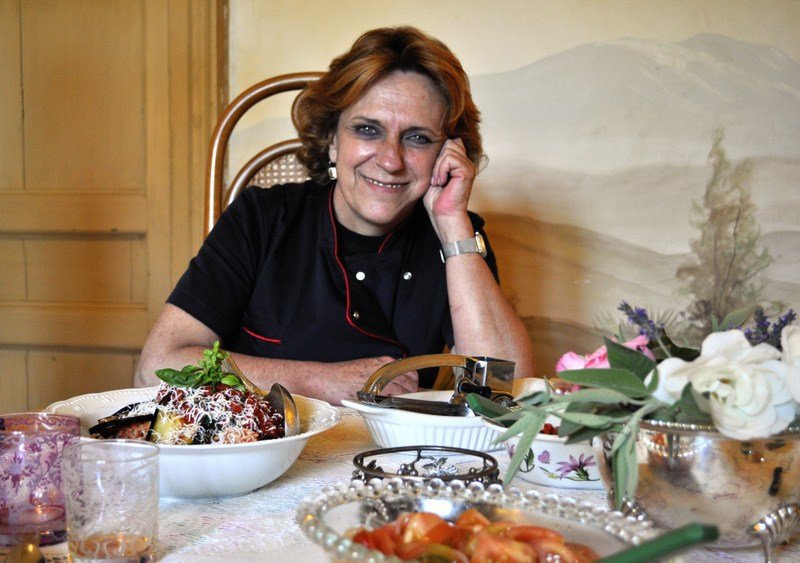 Monica with the food she’d prepared for us

To Make:
Place all the incredients in a bowl and mix together with your hands until well blended
Form into small meatballs, brush with olive oil
Wrap some of the meatballs in a lemon tree leaf and secure with a cocktail stick
Place a sheet of greaseproof paper in a griddle pan and put meatballs on top
Heat over a low heat first one side then the other until lightly browned
Serve and enjoy 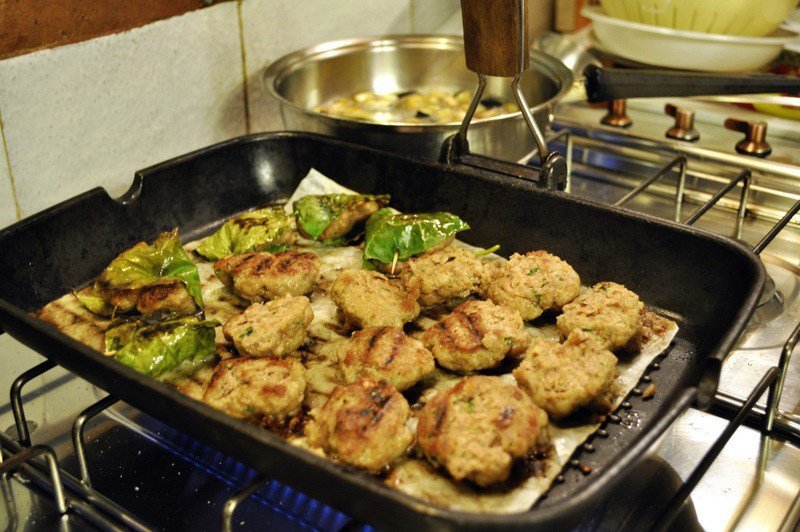 To Make:
Wash the peppers, cut in half, remove the seeds and chop the peppers.
Slice the onions and place in a saucepan with the olive oil, peppers, salt and pepper.
Add, if desired, the capers and pine nuts.
Cover and cook, over low heat for about 15 minutes, stirring occasionally.
Add the vinegar, sugar, stir and let evaoperate for a minutes.
Remove from the heat and add the fresh basil – Serve at room temperature. 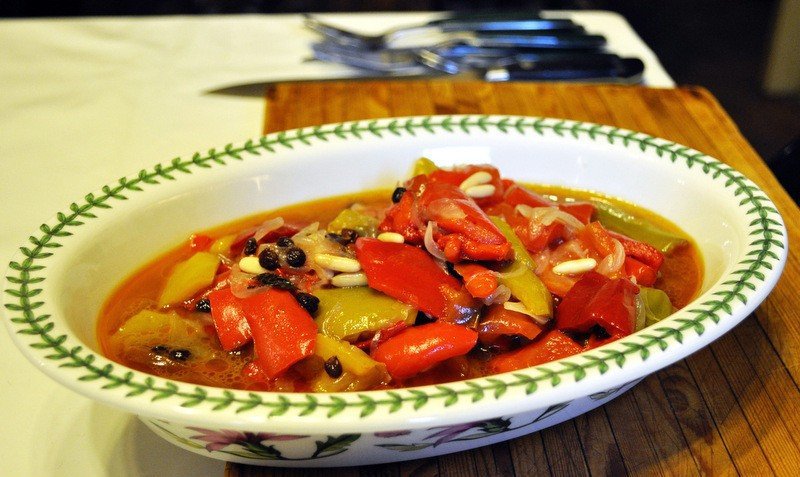 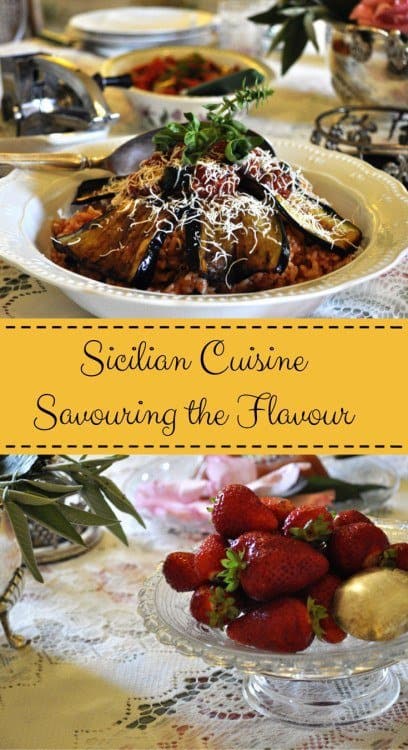 […] cream.  A large savoury selection is also available at Prestipino Boutique and I hear their Pasta Alla Norma is a […]

Catania Market and a Foodie Stroll » The Travelbunny

[…] with a tour of Catania Market before heading to a small village on the slopes of Mount Etna and to Eleonora Consoli’s kitchen.  We’d take a cooking class, put together by gastronomy journalist Eleonora, learning not […]

[…] love the idea of the Sicilian Gastronomic Tour.  Imagine a visit to Catania’s marketplace, choosing your produce and learning how to cook it […]

Suzanne, goodness me ... I can feel the smell from this post - the aroma is filling up my morning. You have really captured the essens of Italian cooking. Love you your story telling ... and your images talks for themselves. Wonderful post. I hope of all my heart that the summer of 2014 is treating you good.

The smell in that kitchen was divine Viveka - and the food tasted wonderful too. Such a fabulous morning we spent there. Everything is good with me Viveka - I've been working very hard at my job these last few months with very little time to write my blog - struggling to keep up! I hope life's treating you well too :)

Oh my goodness, I can't tell you how hungry this post has made me! :)