Istanbul was the last stop on our Turkey Itinerary. With only two days in the city we needed to choose carefully which landmarks we’d visit. Our hotel in Istanbul was in the Sultanahmet District, close to The Blue Mosque, Hagia Sophia and Topkapi Palace. Naturally, they were all high on our Istanbul sightseeing list and maybe a boat trip on The Bosphorus if we had the time. We were excited about the food in Istanbul too.

But there is an unusual attraction in the city that has intrigued me since I first heard about it. Istanbul’s Basilica cistern, and its role in keeping the city supplied with water since the sixth century. 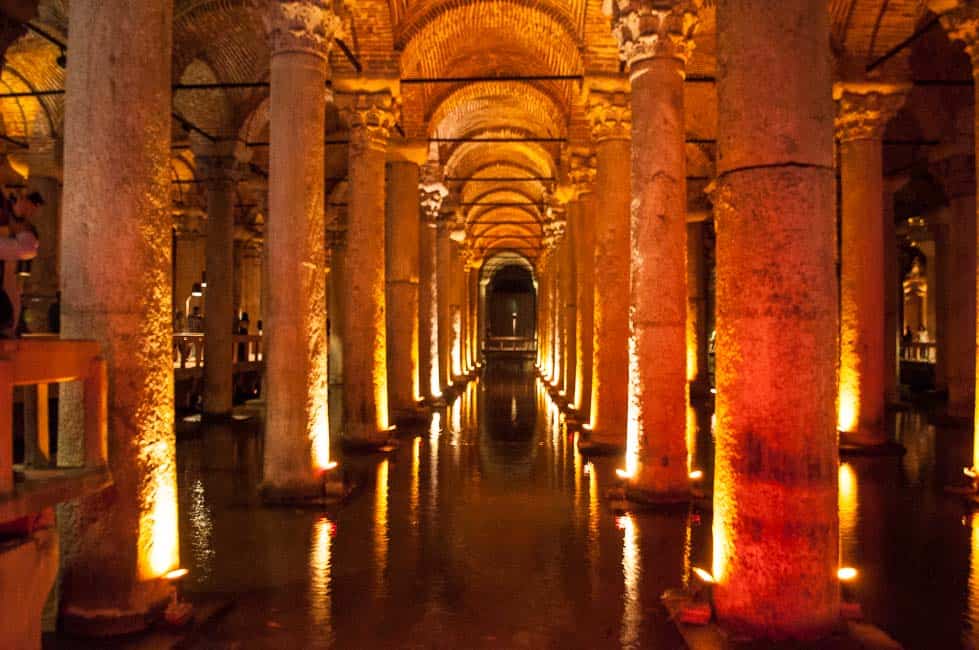 Inside the Basilica cistern, Istanbul

Descending the 55 steps into the gloom of the underground cistern is deliciously cool after being in Istanbul’s blistering heat. The cistern is probably the coolest spot in the city. Amber lighting illuminates the 336 marble columns rising from the water and their height is elongated by the reflections in the shallows. Haunting music echoes around the cathedral-like chamber and accompanies the steady drip, drip of water from the arching 30ft ceiling. Istanbul’s basillica cistern is eerily fascinating. 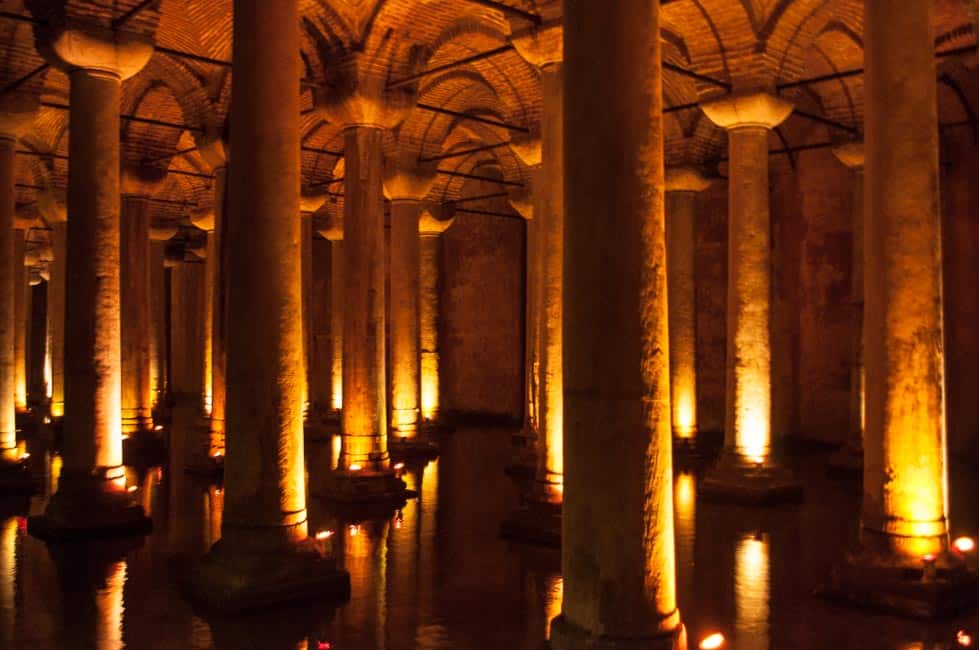 Marble pillars in the Basilica cistern

What was the Basilica cistern used for?

The cistern or, Yerebatan Sarnıcı (sunken palace) in Turkish, is the largest of several hundred ancient cisterns that lie beneath the streets of Istanbul. This massive underground water container, its walls over 4m thick, was built during the reign of Byzantine Emperor Justinian I in 532. It ensured that the people of, first Byzantium, then Constantinople and ultimately Istanbul were kept supplied with water. 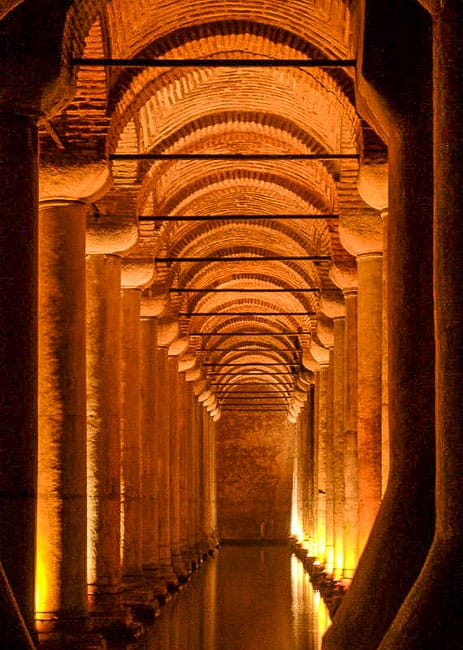 The underground cistern, which is 143-meters long and 65-meters wide, could hold up to 80,000 cubic meters of water. That’s enough to fill 27 Olympic-sized swimming pools. Most of the water was collected from the Belgrade Forest and other areas outside the city. 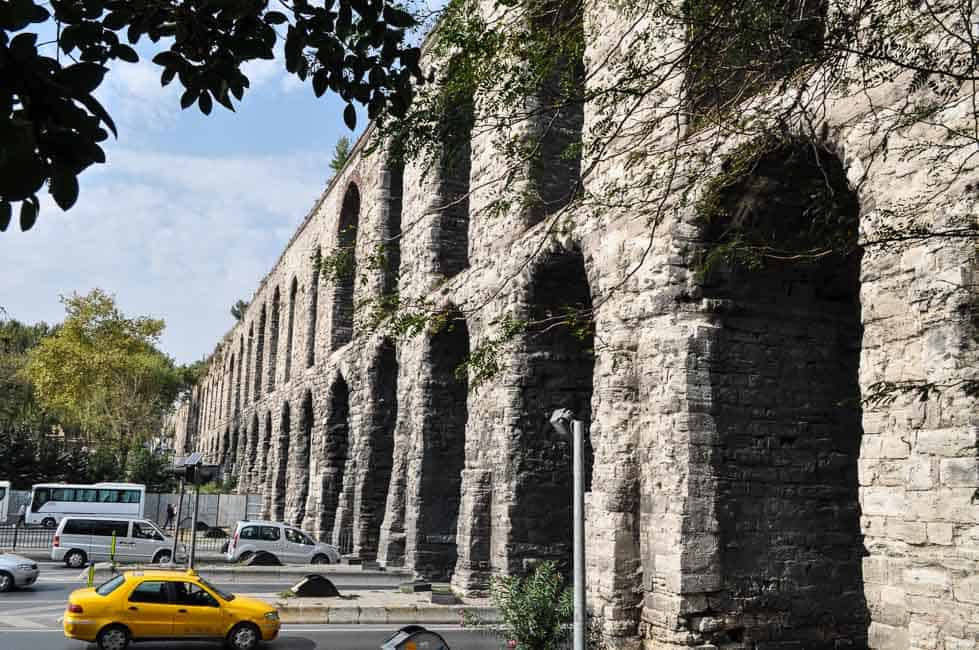 Water was transported partly via the 971-meter long Valens Aqueduct, most of which still exists today. The Basilica cistern is just a small part of a complicated system of aqueducts, water towers, canals and fountains which fed the city with water. 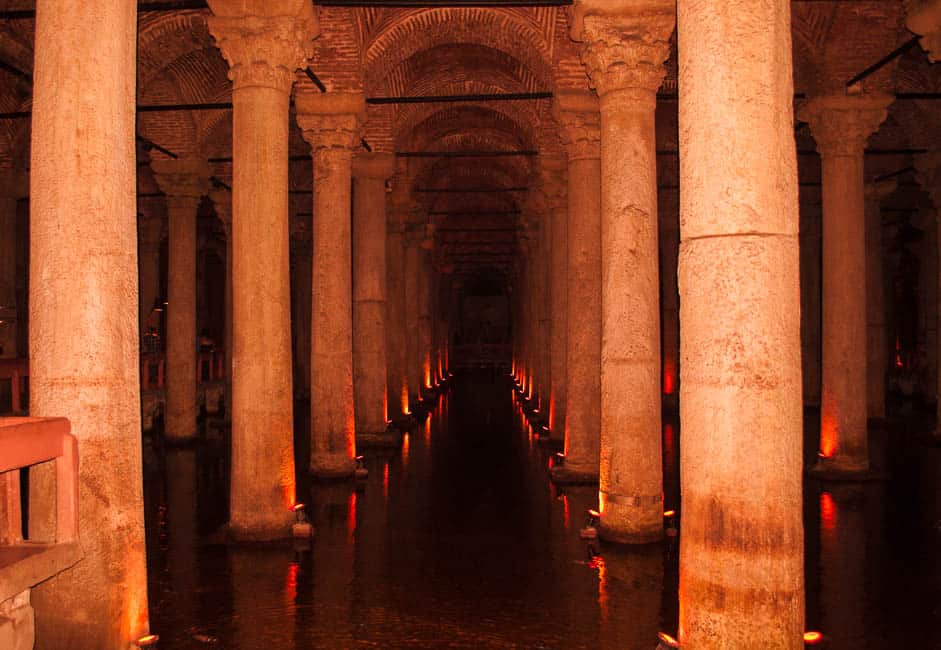 In this subterranean world the 9-metre high columns glow in the darkness; a mixture of Doric, Ionic and Corinthian pillars spaced at four-meter intervals, and arranged in 12 rows of 28 columns each. A raised walkway traverses through the towering pillars and we followed it, dodging the droplets falling from above. Carp swim in the gloomy shallows beneath the boardwalk.

Medusa Heads in the Basilica Cistern

Towards the back of the cistern in the far left-hand corner are two carved stone Medusa heads used as column bases. One is positioned upside down and the other placed on its side. Medusa is one of the three Gorgons, female monsters of the underground world, with the power to turn people to stone.

Some say the carvings are placed on their side to stop their gaze turning onlookers to stone, others that it is so that they are the right height for the columns. I guess the latter is true since the heads were probably reclaimed from another Roman building and not ‘made to measure’. Having said that I did dare to gaze and am still here to tell the tale… 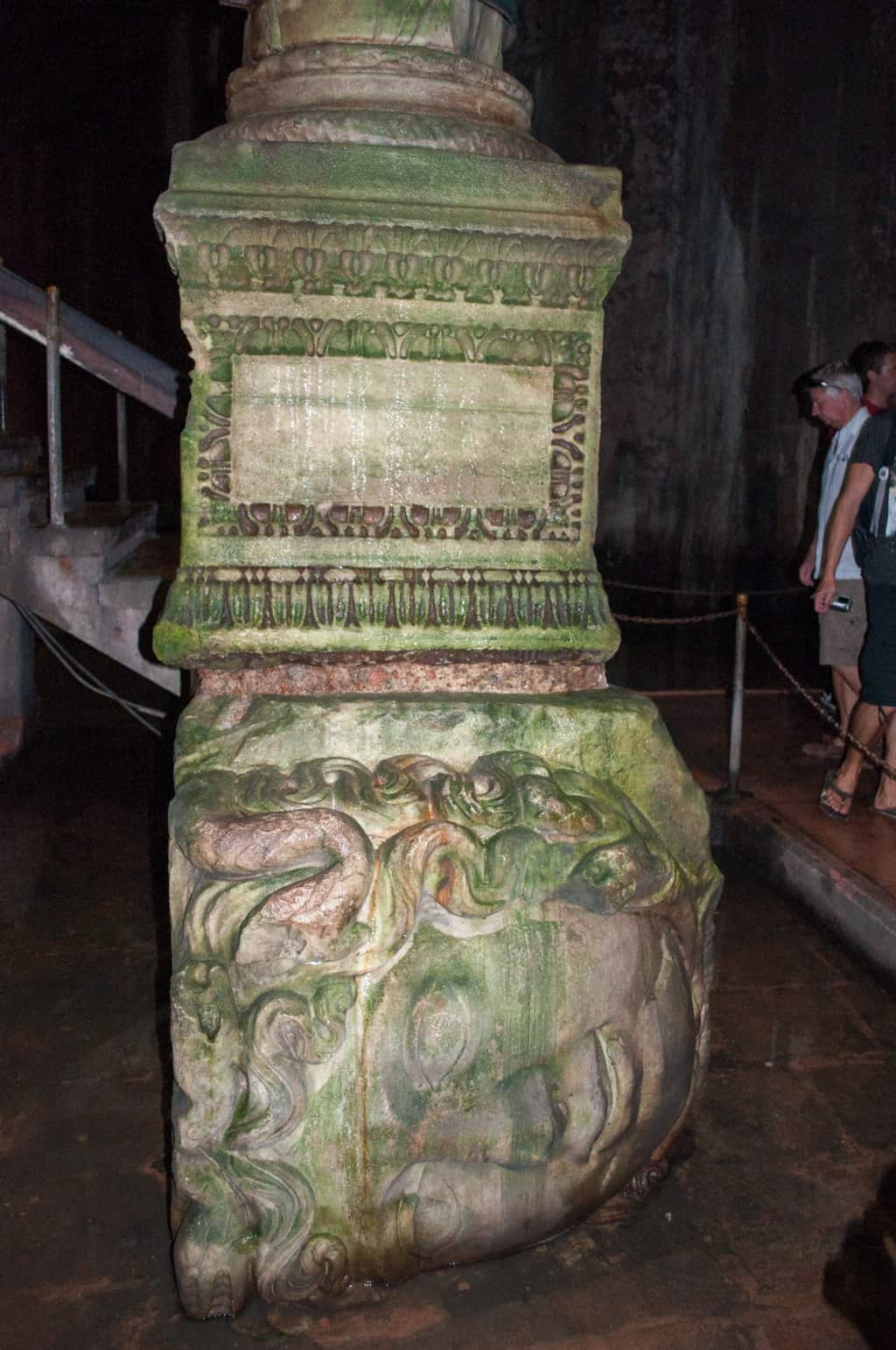 How the Basillica Cistern was discovered

In 1545, while researching Byzantine antiquities in the city, Frenchman, Peter Gyllius was told that people in the locality obtained water by lowering buckets through holes in their basements and sometimes even caught fish this way. Curious to know more he entered via a stone staircase in the back yard of a house and the cistern was re-discovered. After clearing out 50,000 tons of mud, rubbish and allegedy some bodies the Cistern was restored and Istanbul Metropolitan Municipality opened it to the public in 1987.

Where is the Basilica Cistern? 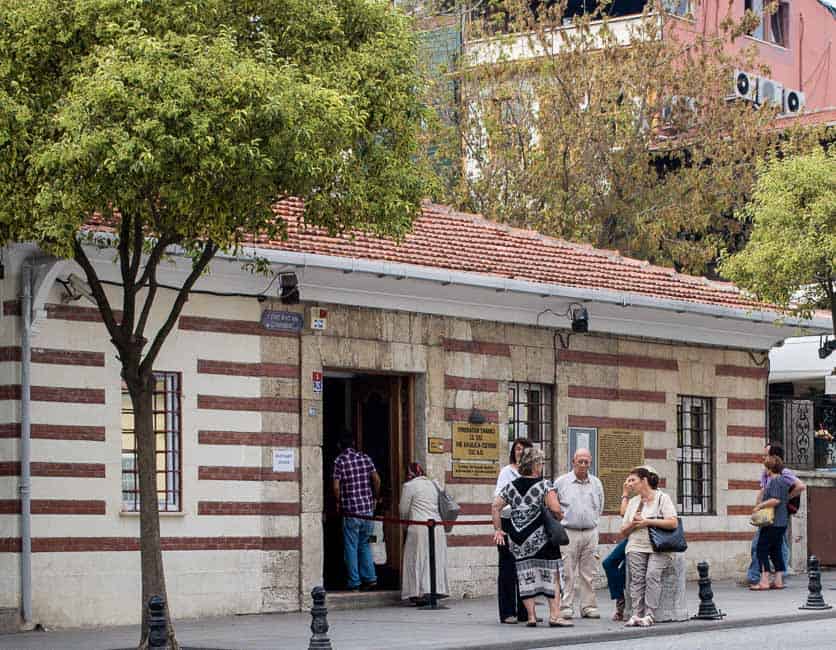 The small entrance is located 150 metres southwest side of Hagia Sophia opposite the yellow building of the Tourist Police in Sultanahmet. Look out for the signs.  There is usually a queue here but a visit is worth the wait our you can buy a skip the line guided tour online. We went while we were waiting for prayers to finish at the Blue Mosque. It’s also a good place to head if the sun is getting too much. You’ll probably spend no more than an hour at the cistern. 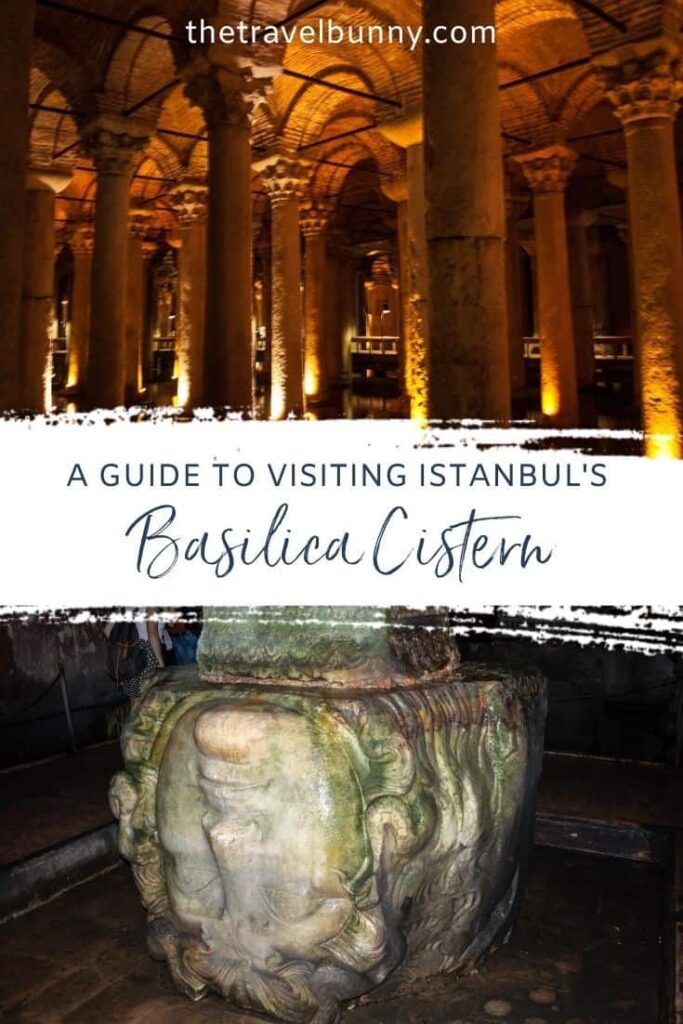 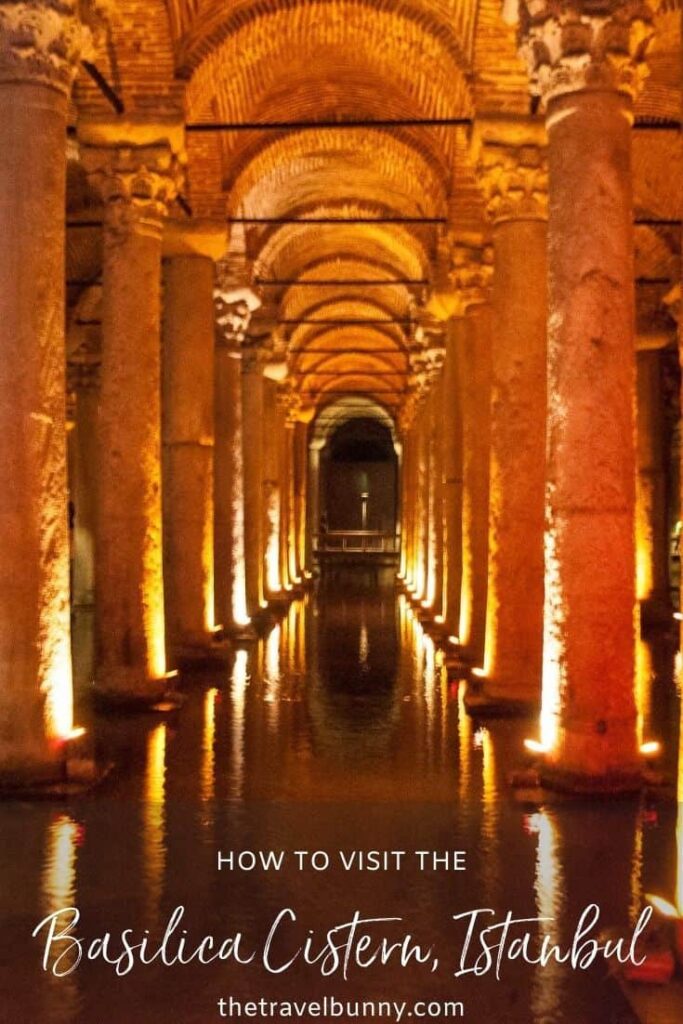 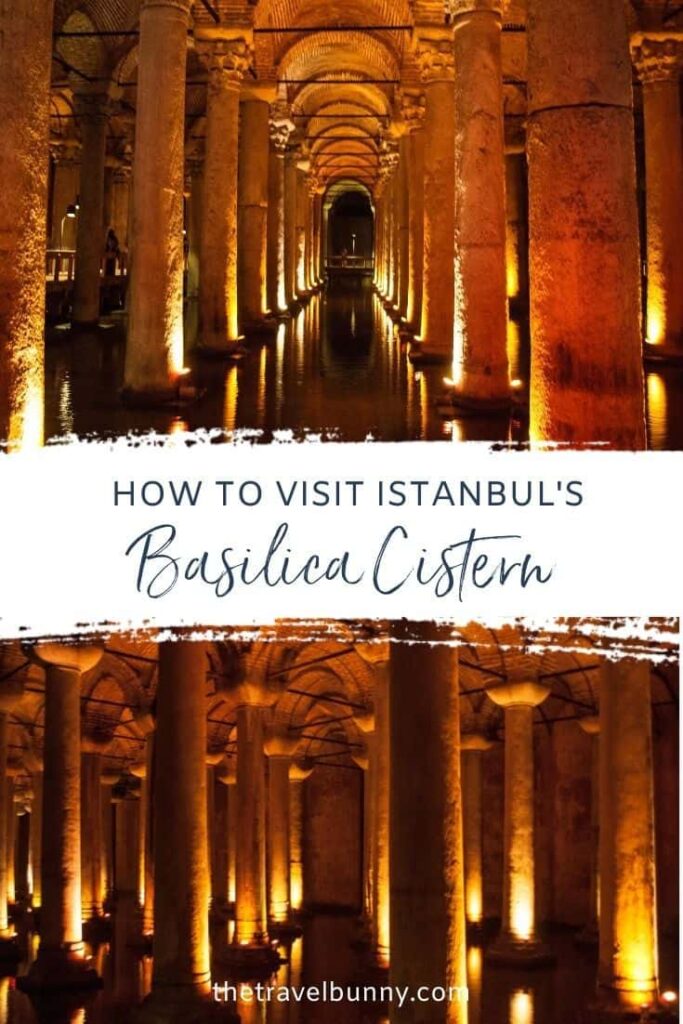 This post contains affiliate links. If you purchase through these links, I will earn a small commission at no extra cost to you. Thank you.

[…] For a more detailed account of the cistern check out “A Travel Bunny’s” article. […]

Hagia Sophia – Pictures from a Museum | The Travelbunny

Istanbul and the Beauty of the Blue Mosque | The Travelbunny

[…] to Istanbul and Sultan Ahmet Camii was high on my must-see list along with Hagia Sophia Mosque and The Basilica Cistern.  Since they’re all in close proximity in the Sulthanamet this is the perfect place to start […]

A Mini Tour of Turkey | the travelbunny

[...] flying into Istanbul we took a flight to Kayseri in the centre of the country.  We then transferred to Goreme in a [...]

[...] We then travelled by bus to Pamukkale, had beach time in Bodrum and finished off our trip in Istanbul.  The highlight had to be our dawn hot air balloon trip in Cappadocia – in fact that is one of my [...]