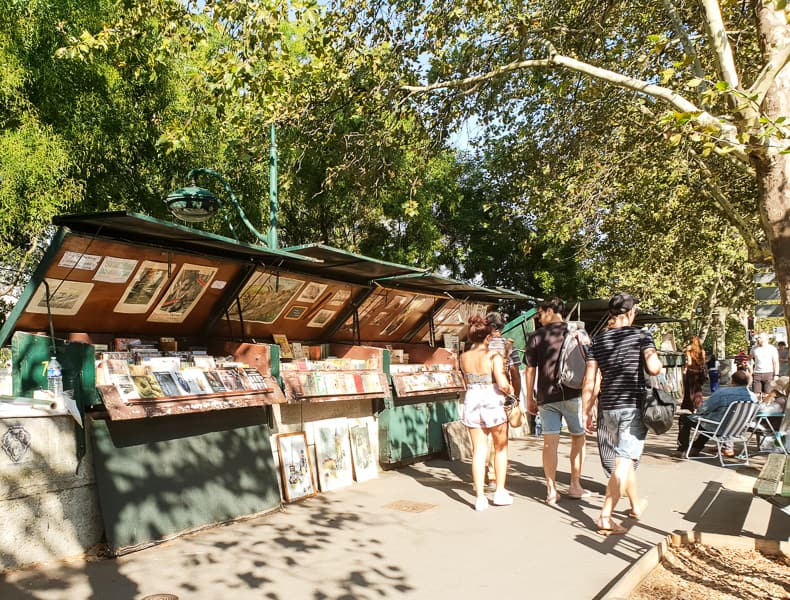 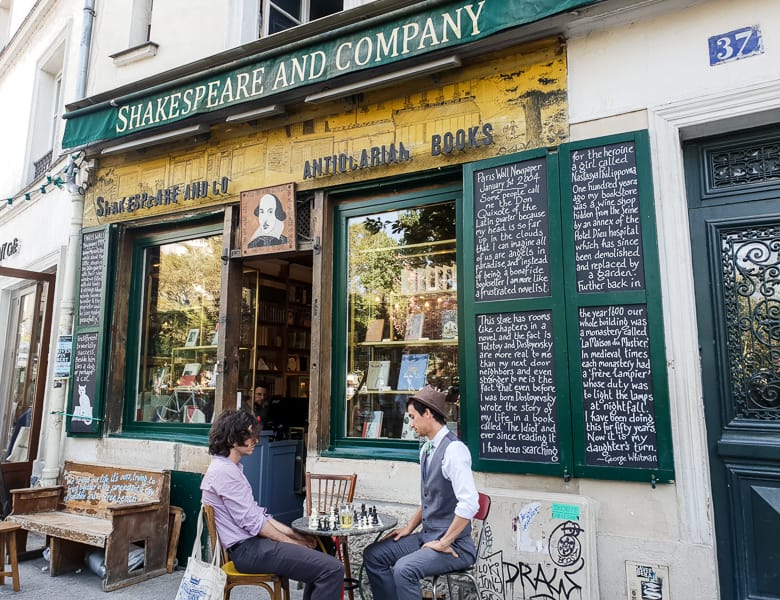 My first literary landmark is one of my favourites. This bookstore is probably the most iconic independent bookshop in the world and a haven for bibliophiles. A literary weekend break in Paris wouldn’t be complete without a visit to Shakespeare and Co.

This atmospheric bookstore on the Left Bank has seen writers from Ginsburg to Hemingway hang out among its volume laden bookshelves. Old and new books line every available space in the jumble of rooms. The two floors feature a piano, reading room and even beds. 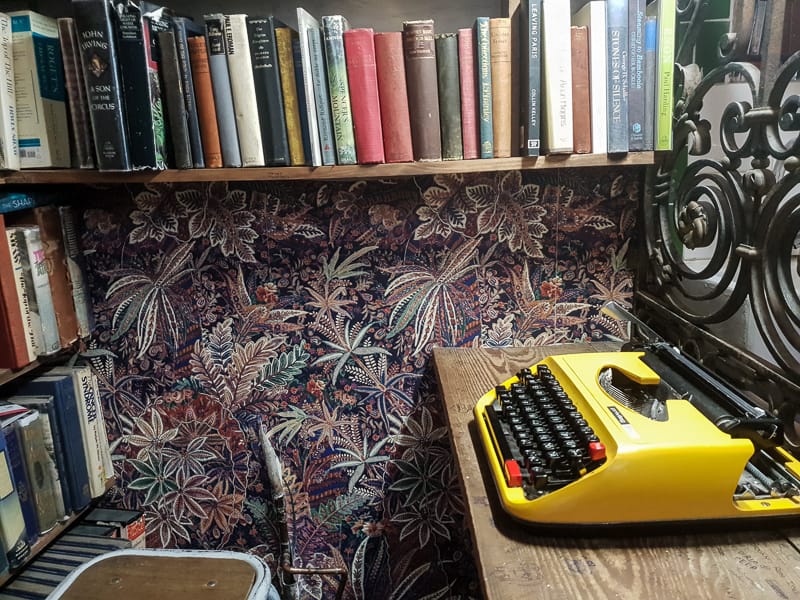 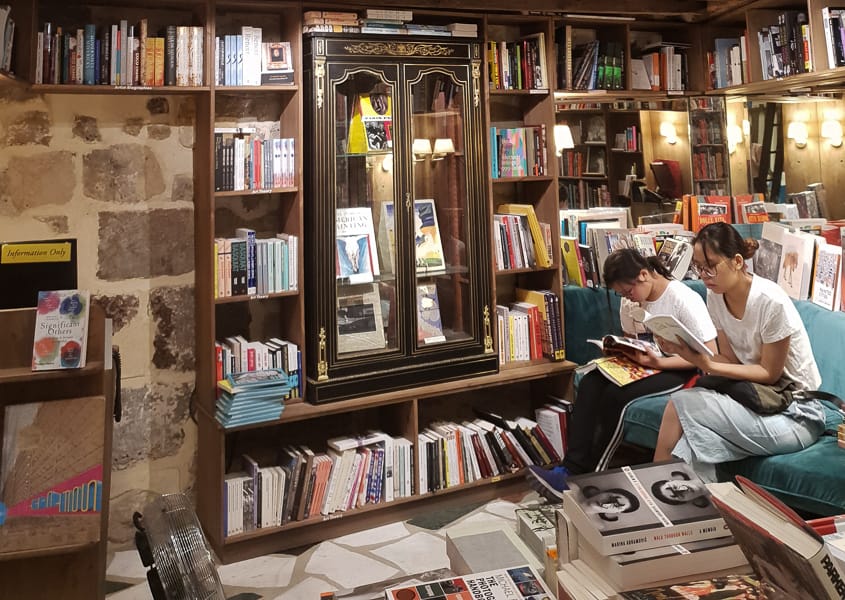 Opened in 1951 by George Whitman the bookshop was a haven for artists and writers who found lodgings there when times were hard. It’s now run by his daughter Sylvia and book lovers can still stay there today, although there are rules.

George Whitman referred to himself as a ‘tumbleweed’ (blowing from place to place) and that’s what they call the guests who stay there today. Tumbleweeds must read a book a day, help out in the shop for a couple of hours daily and write a one-page autobiography for the archives. It’s estimated that over 300,000 of these autobiographies fill the shelves.

If you’re looking for budget accommodation for your weekend in Paris you may have just found it! Or, keep reading to the end for details of a book themed hotel suite in Paris. 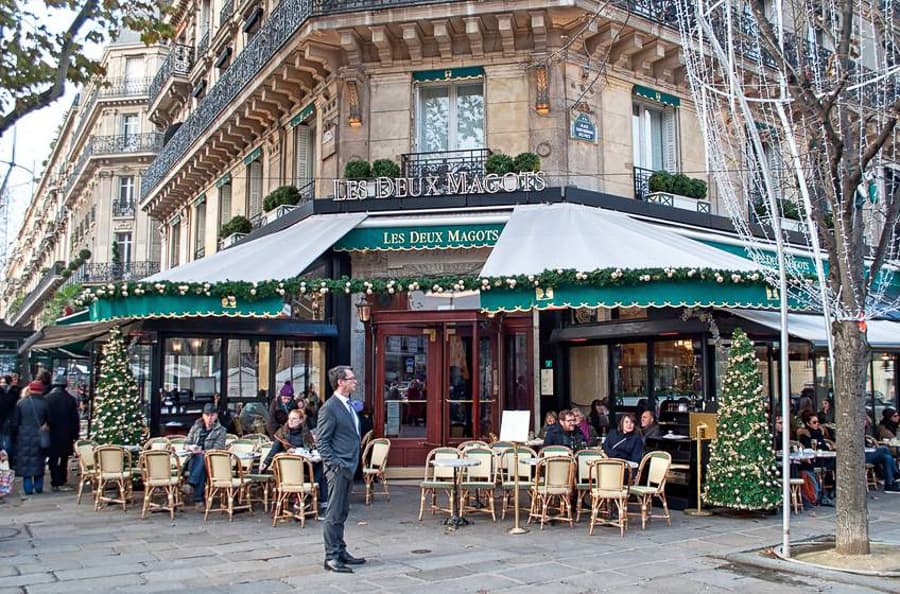 Photo credit: Lucy Dodsworth of On the Luce

Paris weekend breaks mean coffee and croissant in cute cafés or exploring the winding streets of the older Parisian districts. I don’t know which I love more although it doesn’t much matter because in Paris there’re stacks of both.

It seems the writers that lived in Paris also loved a cozy café. The seeds of many great books have been sewn amid the wafting aroma of coffee and Gauloises in Paris’ cafes. Les Deux Magots in Saint-Germain-des-Prés is probably the most infamous of Paris’ literati hangouts.

The café opened in 1912 and became the bohemian bolt-hole of both artists and writers alike. Hemingway, Picasso, Sartre and de Beauvoir all spent time in Les Deux Magots and so should you. Pull up a chair, order a coffee and a pastry and turn a page or two of a book set in Paris.

Read more: All the best bits – the ultimate 2 days in Paris itinerary 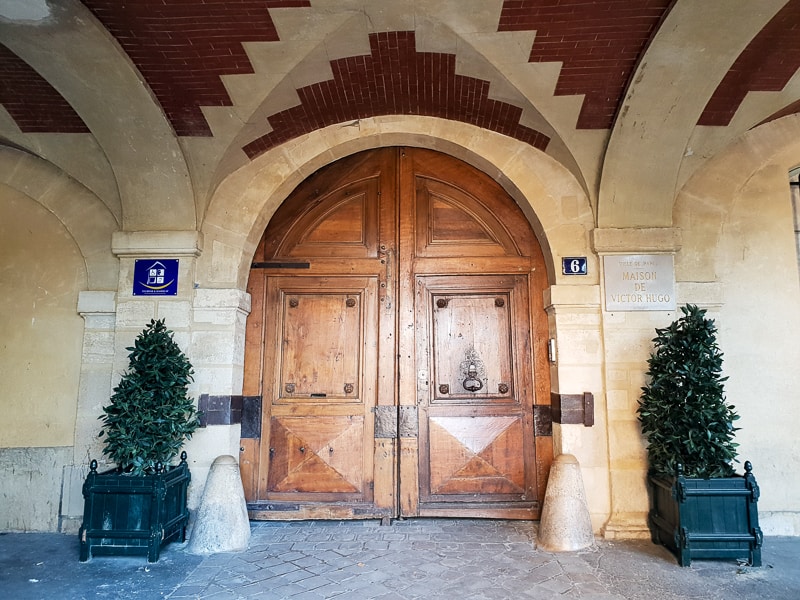 Think of a novel set in Paris and Les Miserables will surely top the list. Victor Hugo lived in an apartment on the beautiful Place des Vosges on the second floor of the Hôtel de Rohan-Guéménée. The narrow alleyways and lanes of Le Marais make the perfect setting for parts of the book which he started writing during his time there.

Hugo’s apartment sits in the square’s north eastern corner and is now the museum Maison de Victor Hugo. Even if you don’t pay a visit to his home then do explore Place des Vosges and maybe while away a few hours on the lawns with a book set in Paris. 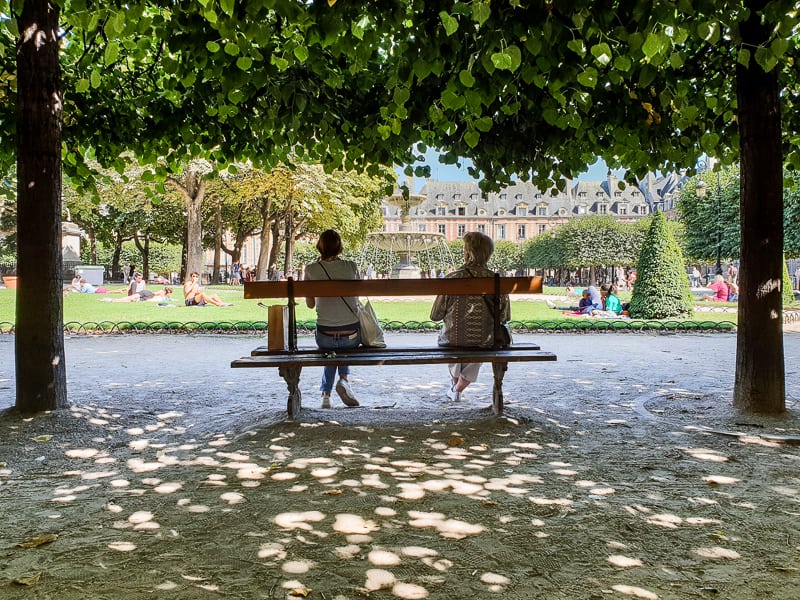 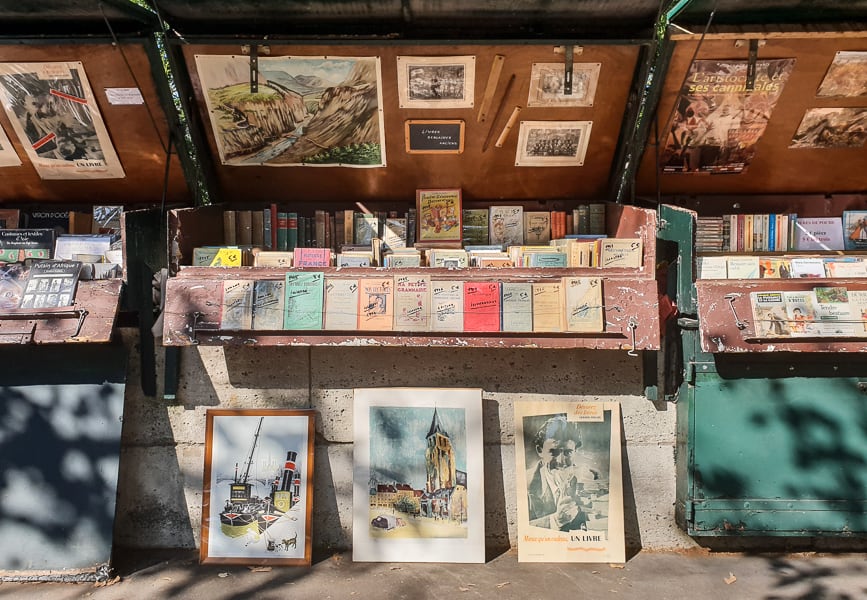 A must do on your weekend break in Paris is a linger along the Seine where you’ll come across long rows of green painted stands. The Bouquinistes have been around on both banks of the Seine in one form or another since the sixteenth century.

Second-hand books, rare books, posters, maps, postcards and other ephemera are sold by the stall-holders. A riverside stroll and some bookish browsing is a pleasant way to pass a Parisian hour or two.

Check out these popular Paris day tours for prices and availability 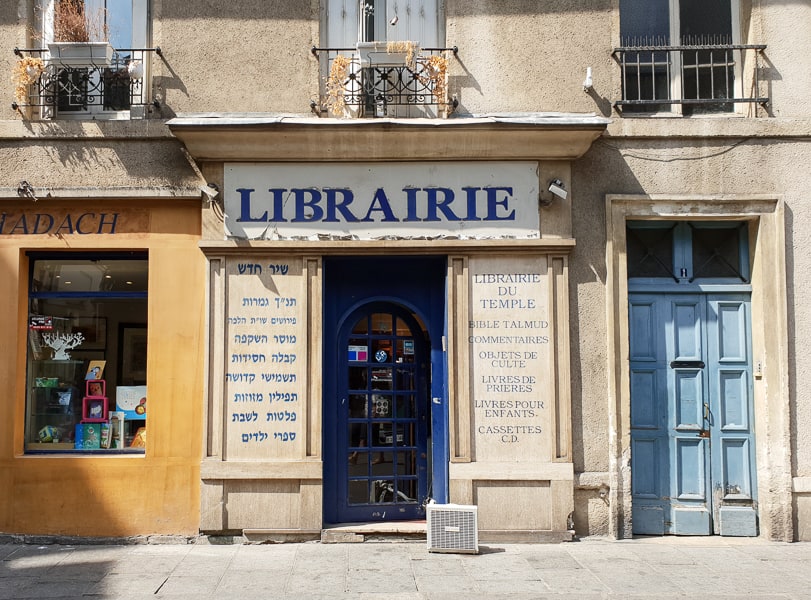 Library in the Jewish Quarter

Some of Paris’ late literary greats have laid down their pens and made Cimetière du Père Lachaise their final resting place. A leisurely literary stroll around the world’s most visited cemetery will lead you to the tombs of Balzac, Molière, Proust, Gertrude Stein and Colette. It may seem a little morbid to spend part of your weekend to Paris in a graveyard but this one is set out like a park and is pleasant to stroll through.

I wanted to visit the grave of Oscar Wilde because I once played the part of Lady Gwendolen Fairfax in The Importance of Being Earnest. Oscar Wilde’s tomb features a naked, winged sphinx-like figure said to be based on his poem The Sphinx. It became a thing to leave a red lipstick kiss on the tomb but the constant cleaning was eroding the stone.

Wilde’s tomb has now been protected with a glass barrier to stop fans leaving their scarlet mark on the memorial.  It should also stop the statue’s appendage being stolen. A fun fact about Paris is that the ‘unusually large’ testicles were purloined by vandals in 1961 although the other ‘bit’ remains. 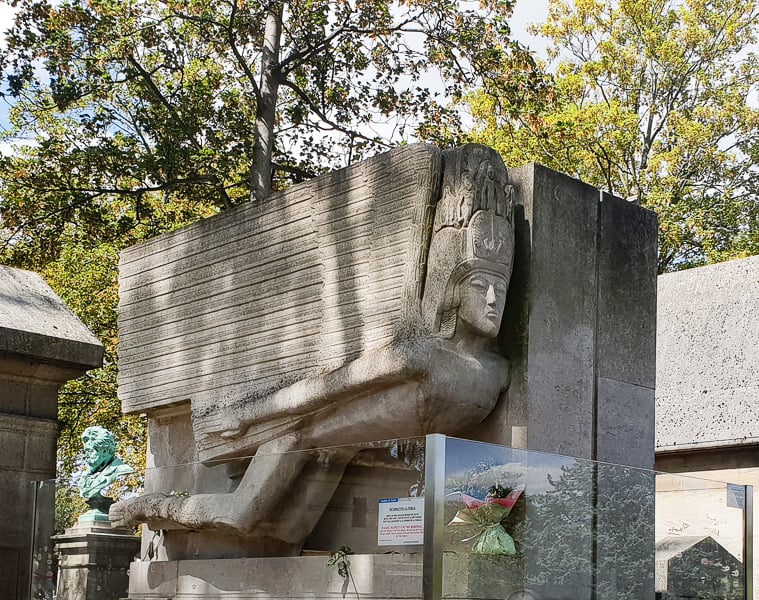 The cemetery is on Boulevard de Ménilmontant | Metro Stations near to Cimetière du Père Lachaise are Philippe Auguste which is next to the main entrance. Gambetta on line 3 allows enty near to Oscar Wilde’s tomb.

Where to stay on your Weekend Break in Paris?

You’ll probably be wanting to stay somewhere appropriately bookish for your literary themed break in Paris. So, if you love books and literature, which I assume you do as you’ve read right down to here, and you love quirky places to stay then I’ve got you covered. 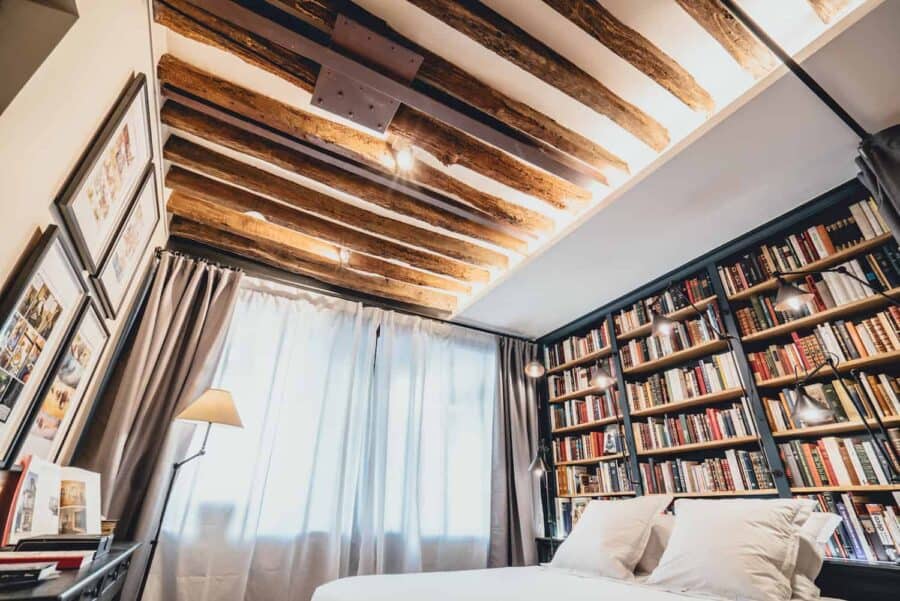 The base for our Paris weekend was Paris Boutik La Librarie. It’s a one room boutique hotel in a converted bookstore in the heart of the historic Le Marais district.

Located in a quiet street just two minutes’ walk from Le Marais it’s the perfect book inspired Paris bolt hole. Imagine sleeping amid 4500 books and manuscripts. This has to be one of the quirkiest hotel stays ever and a book lover’s dream sleepover. 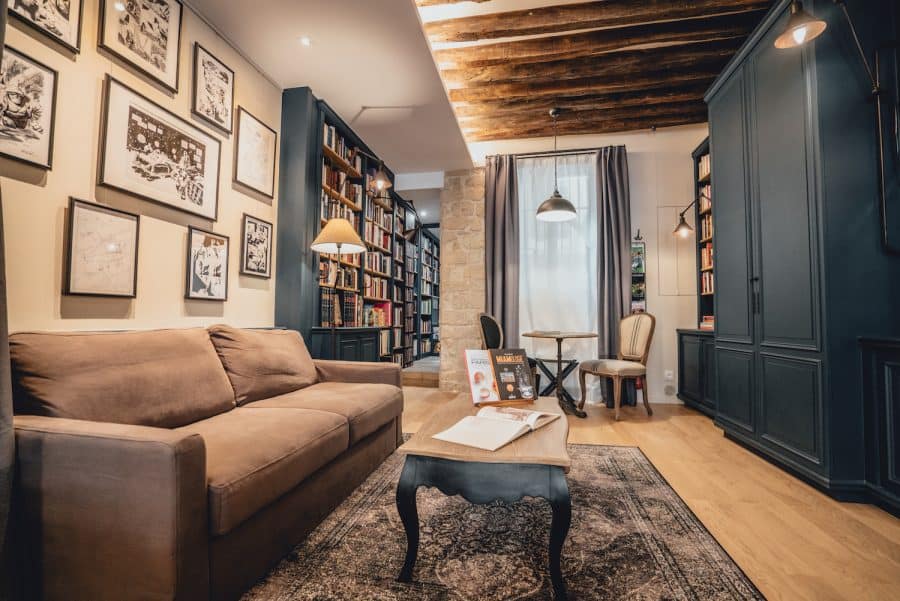 The concept boutique suite is one of two owned by Paris Boutik. La Librairie consists a large room with a big comfy bed, reading/study/dining area. There’s a bathroom with bath tub and shower and a kitchen corner with Nespresso machine, fridge and microwave.

Décor is modern and calm with just the right amount of quirk. As you’d expect the bookshelves are loaded with more books than you’d get through in a lifetime let alone a weekend. Read more in my Paris Boutik Review. 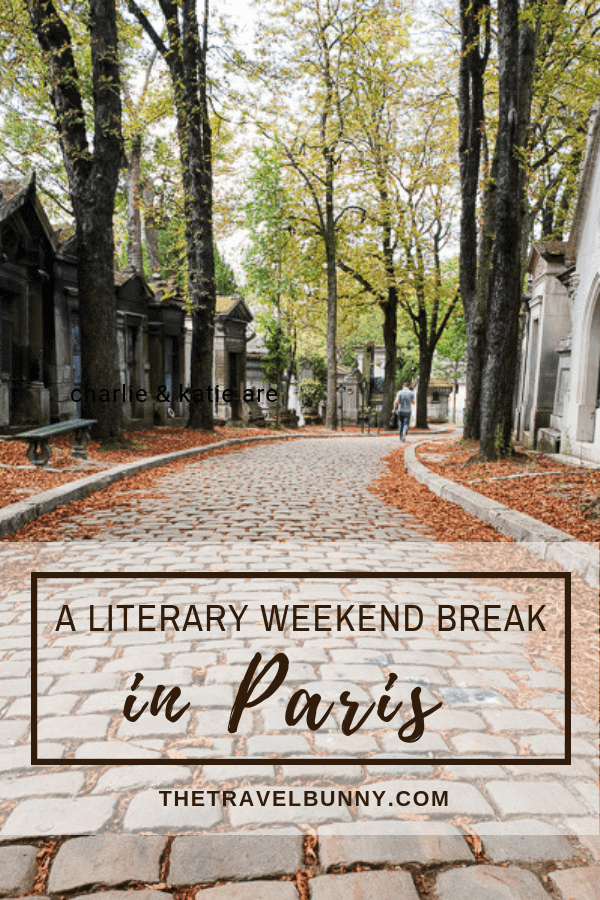 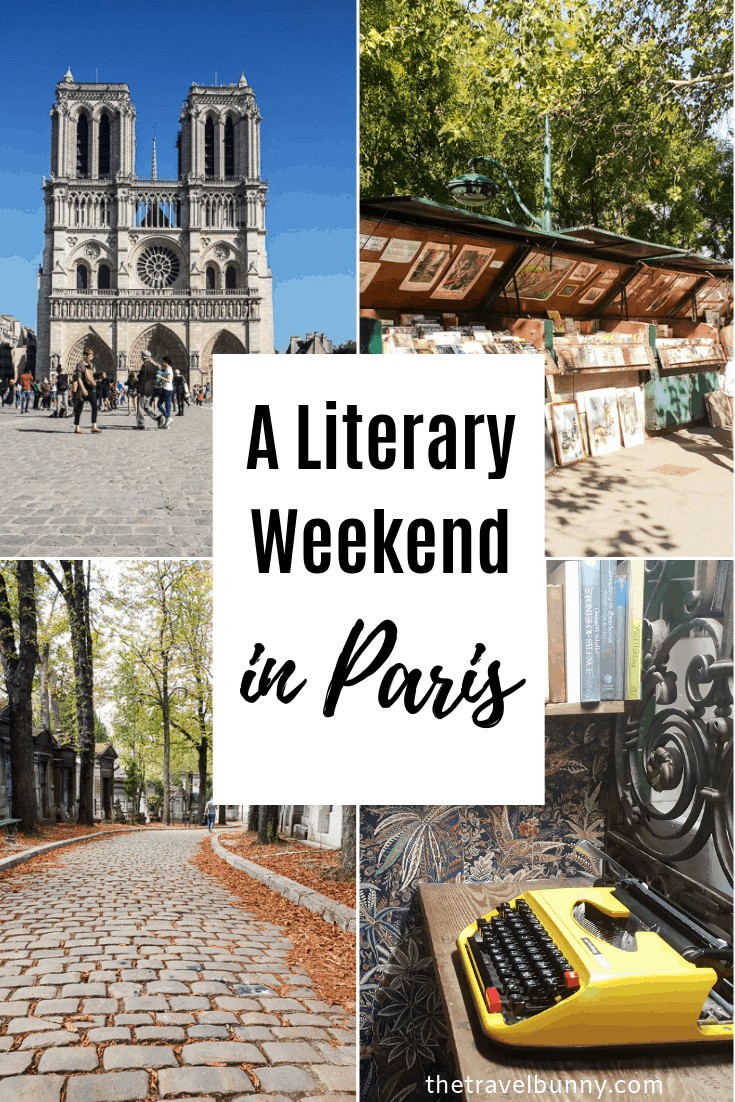 What a great idea for a Parisian weekend! I few of my favourite spots on there, including Shakespeare & Co, and the book suite looks wonderful.

The suite really added to the theme of our weekend break and it was in the perfect area for exploring Le Marais. Shakespeare & Co is a dream!

What a fine place to stay! It's been too long since I visited Paris! And what a fascinating weekend. I know Shakespeare and Company but I've not visited any of the other sites.

Shakespeare & Co is a veritable warren of bookish delights! I think Paris should be an annual event :)

Love Paris and love this list!!! I've just got one to add: visiting L'Hotel where Oscar Wilde died. I went for breakfast, although I couldn't see the room he died in because it was occupied.

I've just Googled L'Hotel and it looks gorgeous. It's only a 15 minute walk from Shakespeare & Co - if I'd known about it we'd have dropped in for a drink to toast Mr Wilde! Might have to add it to this post :)

Here we have again a fantastic travel story ... you're magic. I would love to stay in the book suite too. Your images are brilliant, Mrs Jones. Love the one with the two ladies on bench. So French.

The book suite was fun and right in the heart of Le Marais so plenty of great cafes and restaurants nearby. So glad you like the photos - I like the ladies on the bench too!

Thank you for these literary tips! I’m in Paris over the coming week and literature is a passion so will follow some of these ideas..

I hope you enjoy them as much as we did. Have a fabulous time in Paris.