Sherborne in Dorset is one of England’s prettiest towns. I’d forgive anyone who thought they’d stumbled into a BBC period drama whilst strolling its dreamy little streets. It’s a popular film location for that very reason and there’s the added bonus that’s there’s a range of lovely things to do in Sherborne. 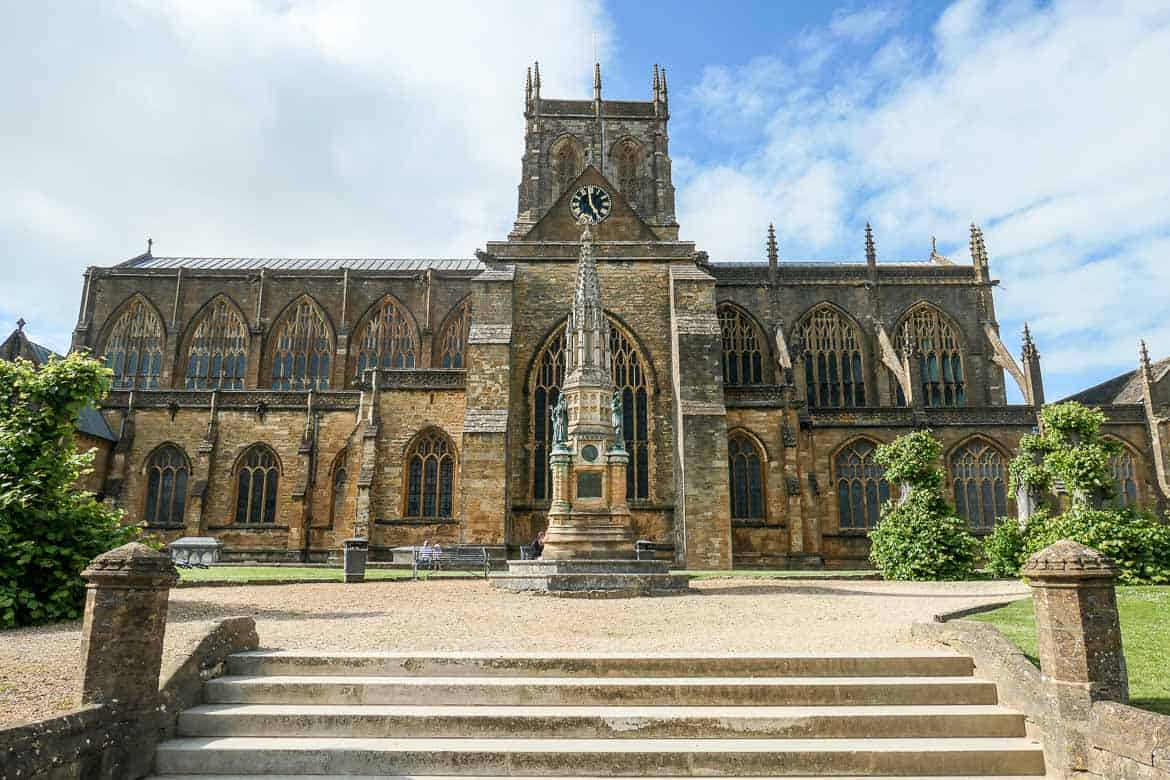 Sherborne things to do 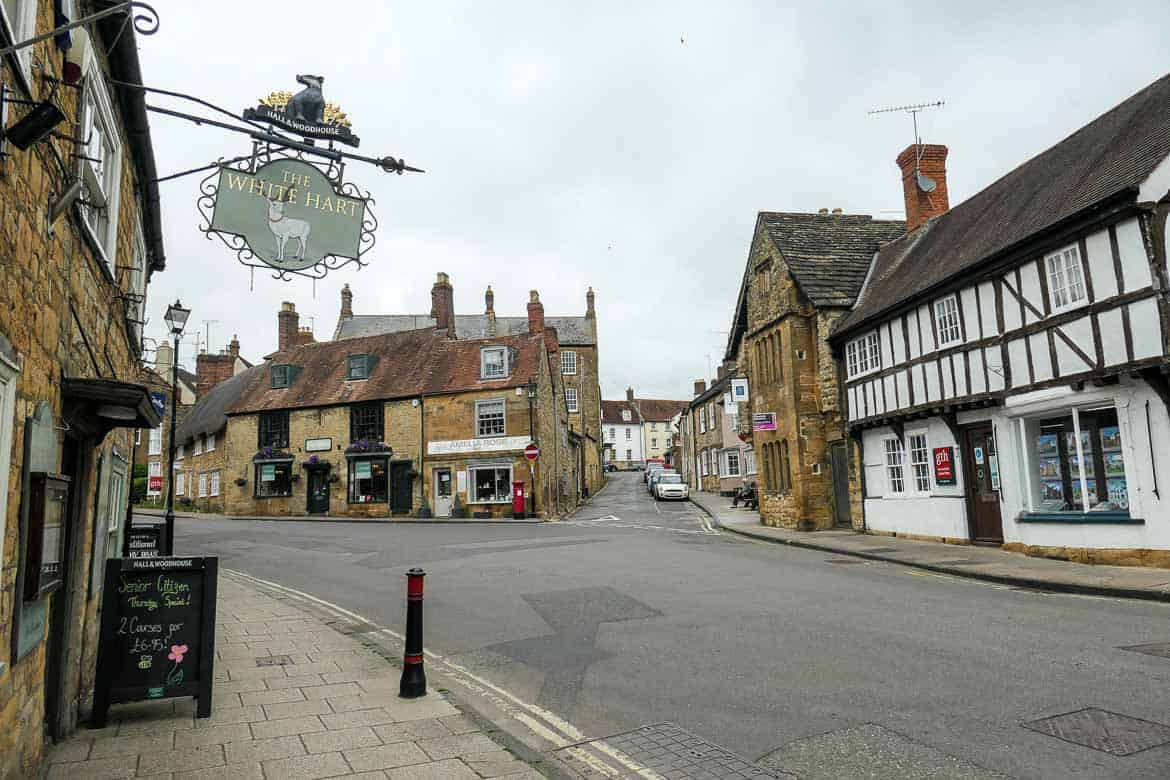 Charming Georgian buildings and half-timbered Medieval dwellings of honey-coloured stone give the town a welcoming glow. Along with oodles of quaintness you’ll find a raft of history in its ancient abbey and two castles.

Sherborne has been home to Sir Walter Raleigh and Alan Turing. Sherborne makes for a perfect UK staycation and we loved exploring the town from our base at The Eastbury Hotel and cottage.

Cheap Street is filled with an enviable range of independent stores, cafes and boutiques. There are galleries, arts and craft shops plus the town is home to the renowned Sherborne School.

Before we move onto my list of the best things to do in Sherborne let’s learn a bit about the town’s history.

A brief history of Sherborne 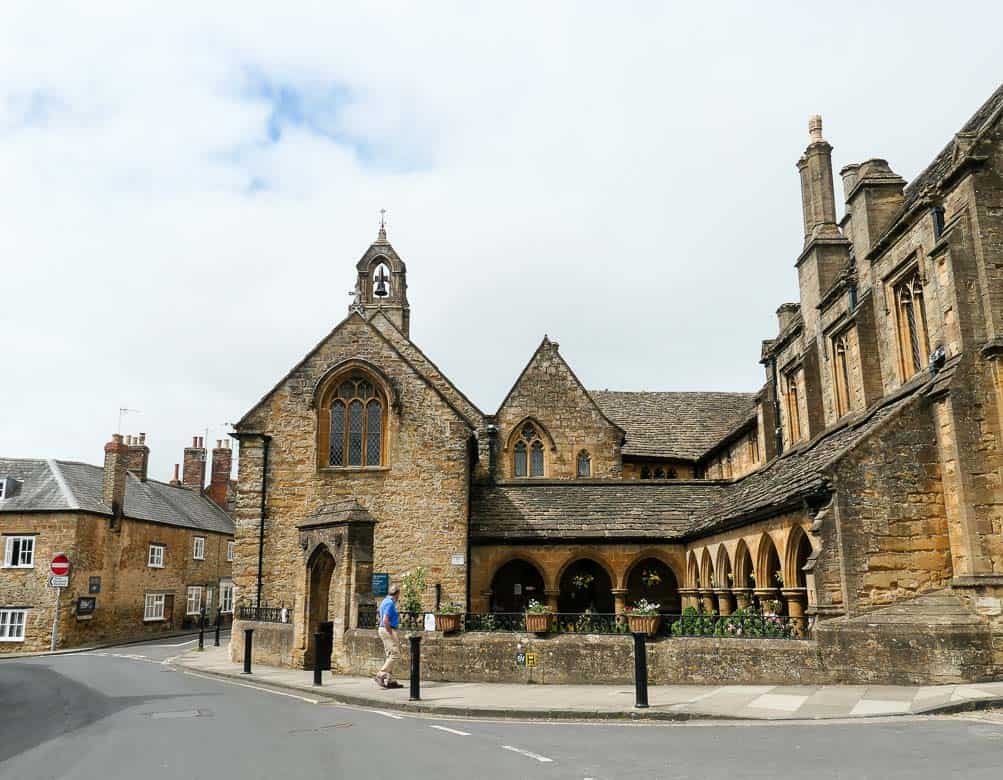 One of England’s most ancient towns, Sherborne has been established since Roman times.

The name Sherborne comes from the Saxon words “scir burne” which means place of the clear stream. The town is located on the River Yeo.

Once the capital of Wessex, a cathedral was first built in the area in 705. Two kings, Ethelbert and Ethelbald, the older brothers of Alfred the Great were buried in Sherborne Abbey. In 1075, when the Bishop’s seat moved from Sherborne to Old Sarum (Salisbury), the Cathedral became a Benedictine abbey.

Henry VIII dissolved the monasteries in 1539 and the monastic buildings became Sherborne School in 1550. The abbey became a parish church. Both are very much the central focus of the town today.

The best things to do in Sherborne, Dorset

It’s a delight to discover Sherborne with enough to keep you busy for a day or two which makes it perfect for a weekend getaway or mid-week break. Sherborne isn’t huge which means it’s easy to explore on foot and much of the town’s attractions are free to visit. 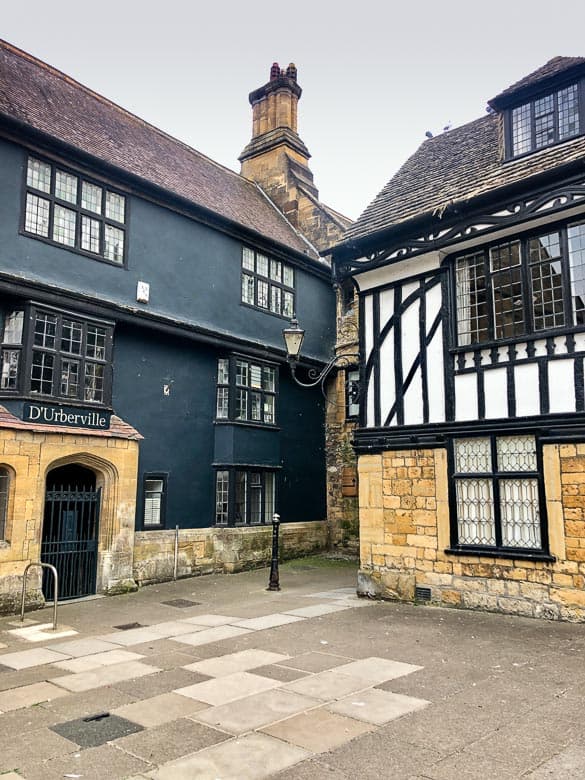 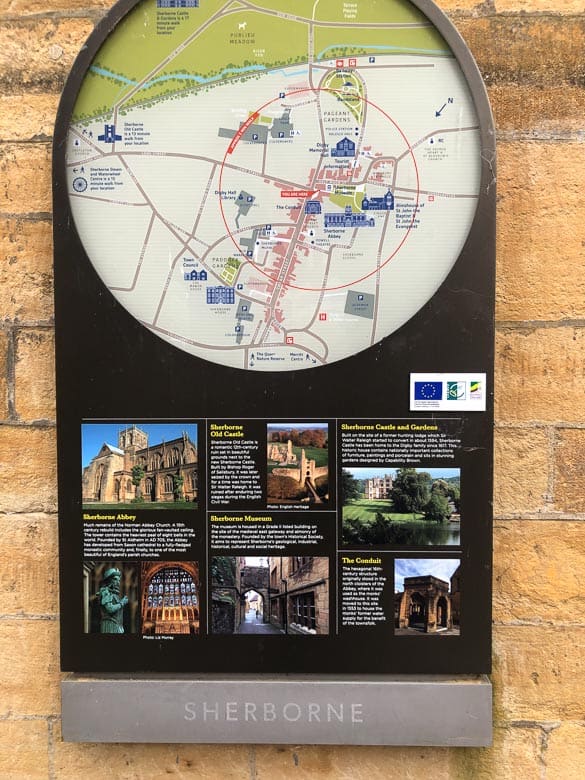 Start with the Sherborne Town Trail which is an excellent way to get your bearings and will guide you around the main sites in Sherborne.

Head for the hexagonal conduit at the bottom of South Street. The conduit originally stood in the abbey cloisters and was used by the monks as a washhouse. It was moved to this site after the Dissolution of the Monasteries and has since been used as a water supply for the town, a police station, a bank and even a reading room.

On the wall next to the conduit you’ll find a map of Sherborne Town Trail. Take a photo on your phone and use the guide to navigate the town’s top spots. 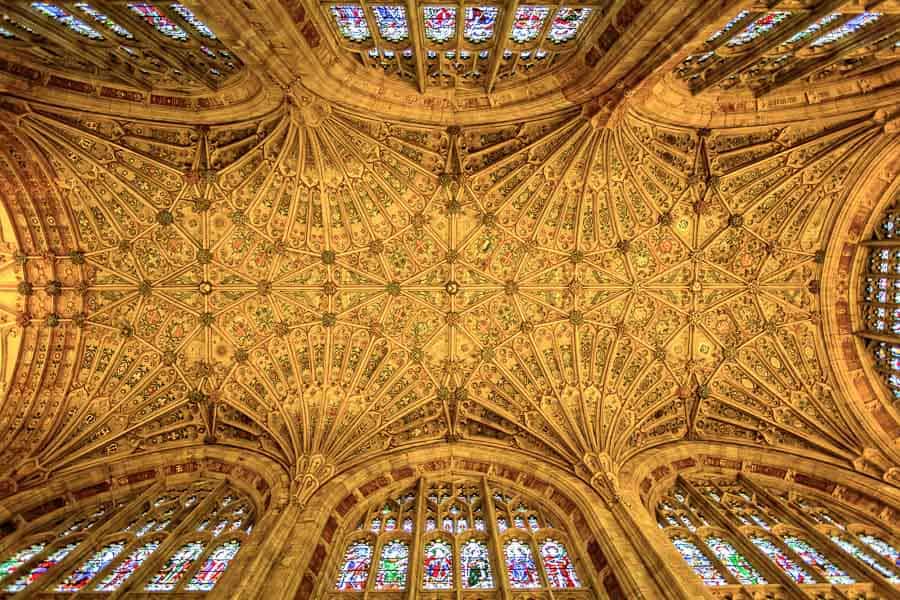 The vaulted ceiling of Sherborne Abbey in Dorset

The beautiful Sherborne Abbey dates from Saxon times and has the heaviest peal of eight bells in the world. The stone, fan-vaulted ceiling, is stunning so make sure you take the time to look inside, it’s the earliest fan-vaulted ceiling in existence. An engraved glass reredos by the artist Whistler can be found in the Lady Chapel.

The Great West Window was replaced and dedicated in the presence of Queen Elizabeth II in 1998.

The abbey is free to visit although donations are welcomed and is possibly the best of Sherborne things to do. 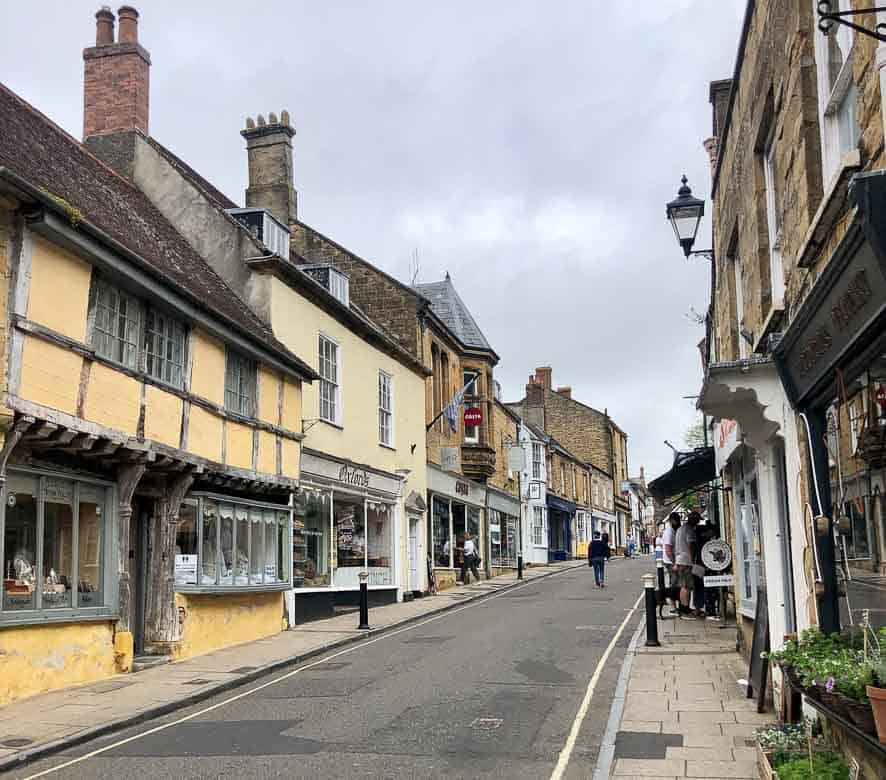 Pedestrianised Cheap Street is packed with a fabulous array of independent shops as well as a few High Street staples like Sainsburys, Boots and a Waitrose which is set within a beautiful colonnade. Perfect if you’re staying in self-catering accommodation.

Indy shops include a range of homeware, soft furnishing and interior shops as well as galleries, art shops and Winstone’s bookseller and a cook shop. There are outdoor clothing outlets and everyday clothing retailers like Joules and Crew Clothing.

The open-air market on Cheap Street takes place on Thursdays and Saturdays 9am-4pm and is well worth visiting.

A wander up and down Cheap Street with a bit of shopping was one of my favourite things to do in Sherborne after seeing the top Sherborne sights. 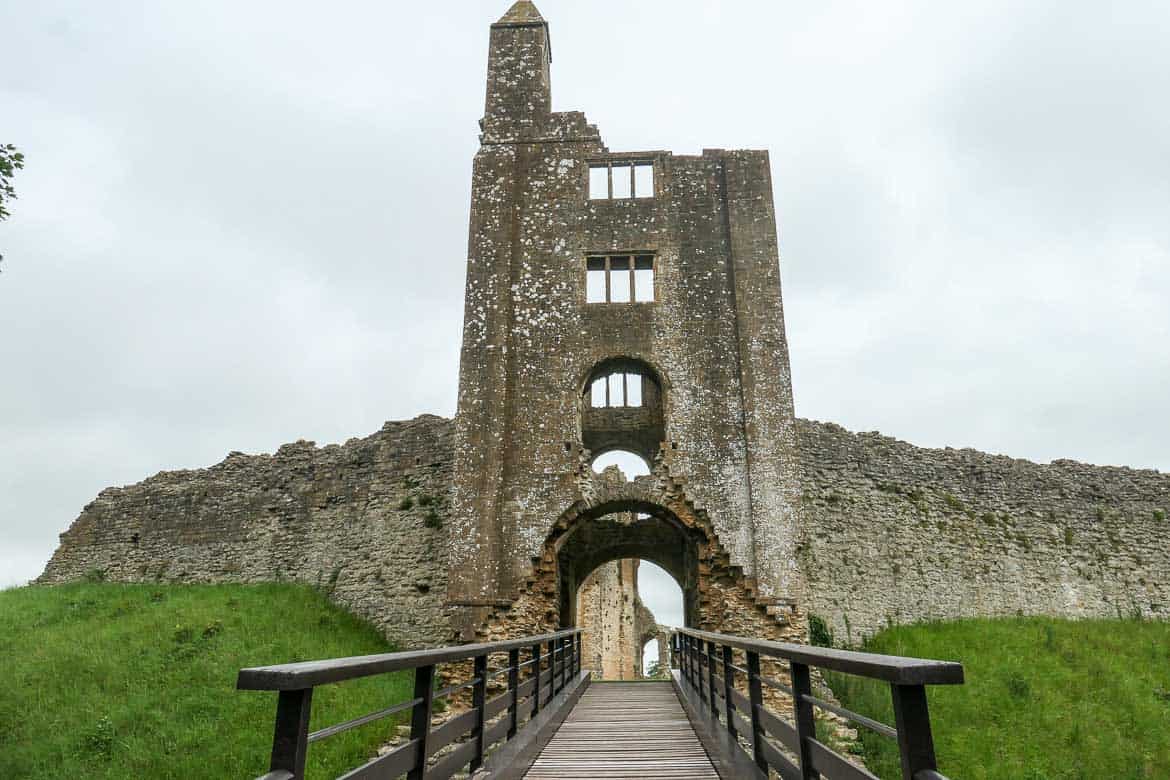 There are two castles in Sherborne, we’ll start with the oldest which was built in the twelfth century by Roger de Caen, who was both Bishop of Salisbury and Chancellor of England. The castle withstood two sieges during the Civil War and was described by Cromwell as ‘a malicious and mischievous castle’.

Sherborne Old Castle was gifted to Sir Walter Raleigh by Elizabeth I in 1592. After a brief sojourn in the Tower of London, after displeasing the Queen, Raleigh was allowed to return to Sherborne but by then the castle had fallen into disrepair. Raleigh made massive improvements to the old hunting lodge located in the grounds and moved in. The lodge is now known as Sherborne Castle.

The old castle, which is managed by English Heritage, is now mainly ruins but the southwest gatehouse and some features still remain. The castle has sweeping views of the surrounding countryside and Sherborne Castle. It’s also a good spot for a picnic after picking up lunch from one of the town’s delis or the market. 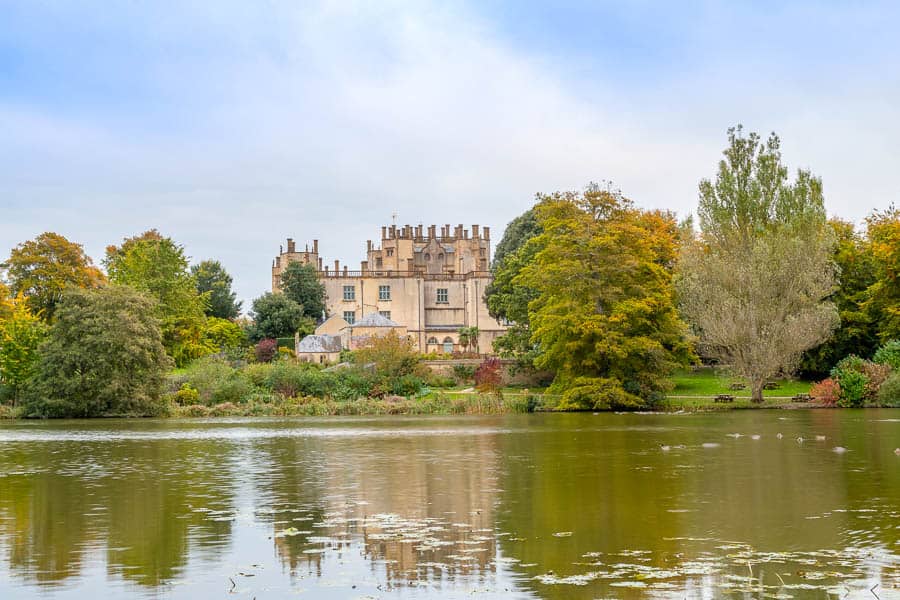 Sherborne Castle is now the home of the Digby family and has been since 1617. Illustrious guests to the castle include William of Orange and George III.

The impressive state rooms house important collections of art, porcelain and furniture and showcase decorative styles which span over a 400 years. There’s also a Sir Walter Raleigh Exhibition. As well as the castle to enjoy you’ll find 42 acres of landscaped gardens and a 50-acre lake which were designed by Capability Brown in the mid-eighteenth century.

A gift shop and tea rooms can be found at the castle and various events take place throughout the year. Check Sherborne Castle website for opening times and dates as it’s not open year round. 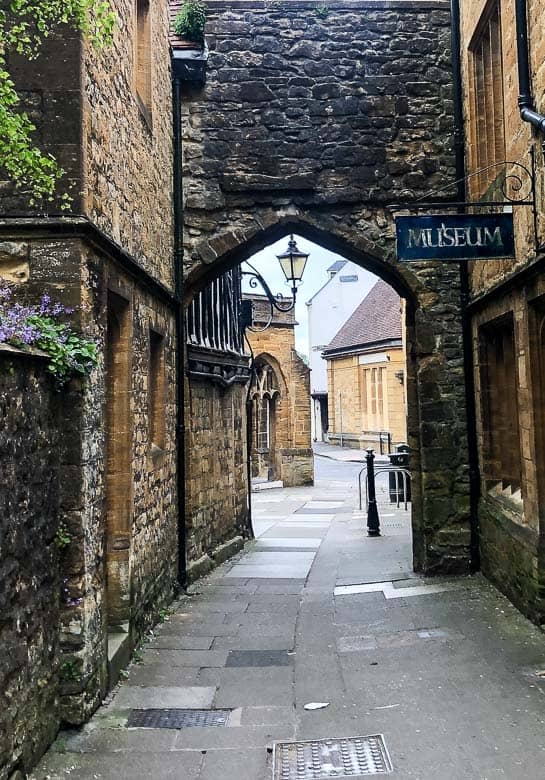 You’ll find Sherborne Museum in Church Lane, the narrow alley that runs from the Conduit in the market place to the Abbey. It’s housed in the gatehouse and almonry of the old monastery.

If you love your history then this might be the place to visit before you start your explorations of Sherborne. You’ll get an insight into the town’s history as well as the chance to view some unusual artefacts and its huge photographic archive.

In May the town is buzzing with Sherborne Abbey Festival. For five days audiences are entertained to a wide range of musical performances and concerts by local and internationally renowned musicians.

Performances are held in some of Sherborne’s most iconic settings including the Abbey. Many of the concerts are free to enjoy. Occasionally a mini festival is held in the town in September.

During October another cultural event in Sherborne is the Film Festival which runs for four days. The Film Festival showcases recently released foreign and international films.

Staying on Sherborne’s cultural trail, The Jerram Gallery, on Half Moon Street, has a range of six exhibitions held throughout the year. These feature Contemporary British paintings and sculptures from both established and newer artists. Entry to the gallery is free.

Eating and drinking in Sherborne 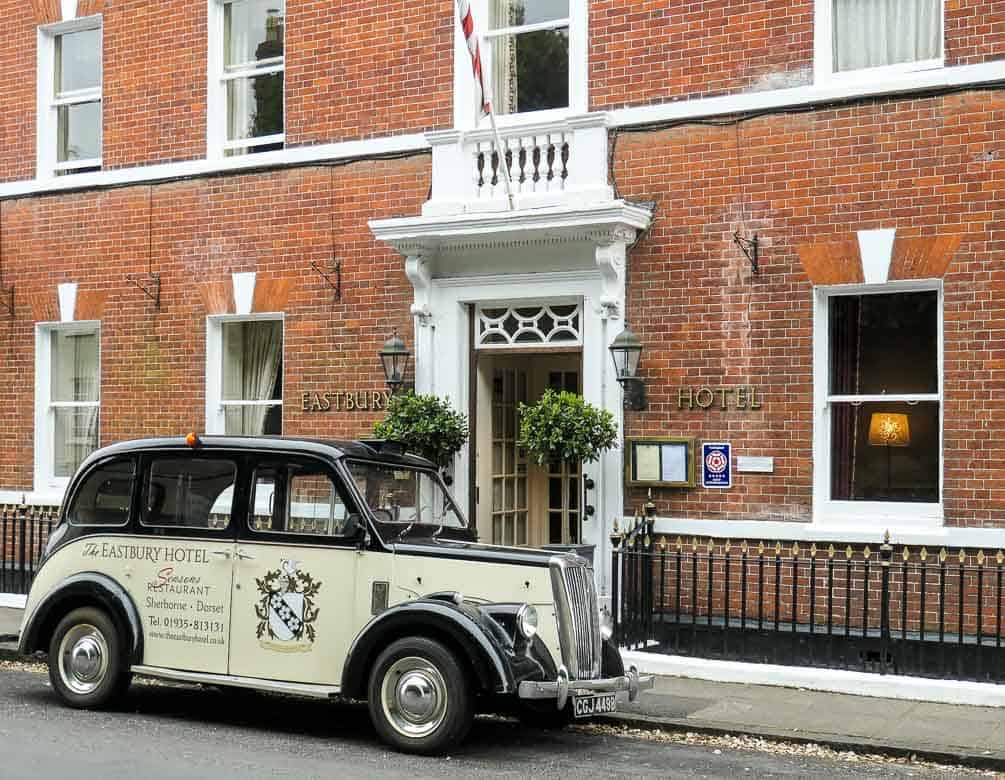 You’re spoilt for choice when it comes to places to eat in Sherborne. From coffee shops and delis to high end restaurants and gastro pubs you’ll find something everyone will enjoy.

Our favourite was Seasons restaurant in The Eastbury Hotel and we also enjoyed Indian cuisine at The Rajpoot in Half Moon Street. Tamburino Gold, in Digby Road is a good Italian restaurant with great views of the Abbey.

There are loads of great pubs in Sherborne. We visited The Plume of Feathers, The George and the Half Moon Inn. All very good and very welcoming.

Where to stay in Sherborne

The cottage is part of the beguiling Eastbury Hotel in Sherborne, located just two doors away. Guests at the cottage are free to book in at the spa and have use of the gardens, restaurant and bar. Great if you’re looking for a relaxing break although verything you’d need for self-catering is included in the cottage. There’s a lovely garden with its own private wood-burning hot tub!

Read my review of the Eastbury Hotel and Cottage for more information.

Check rates and availability at The Eastbury Hotel and cottage or other accommodation in the Sherborne area. 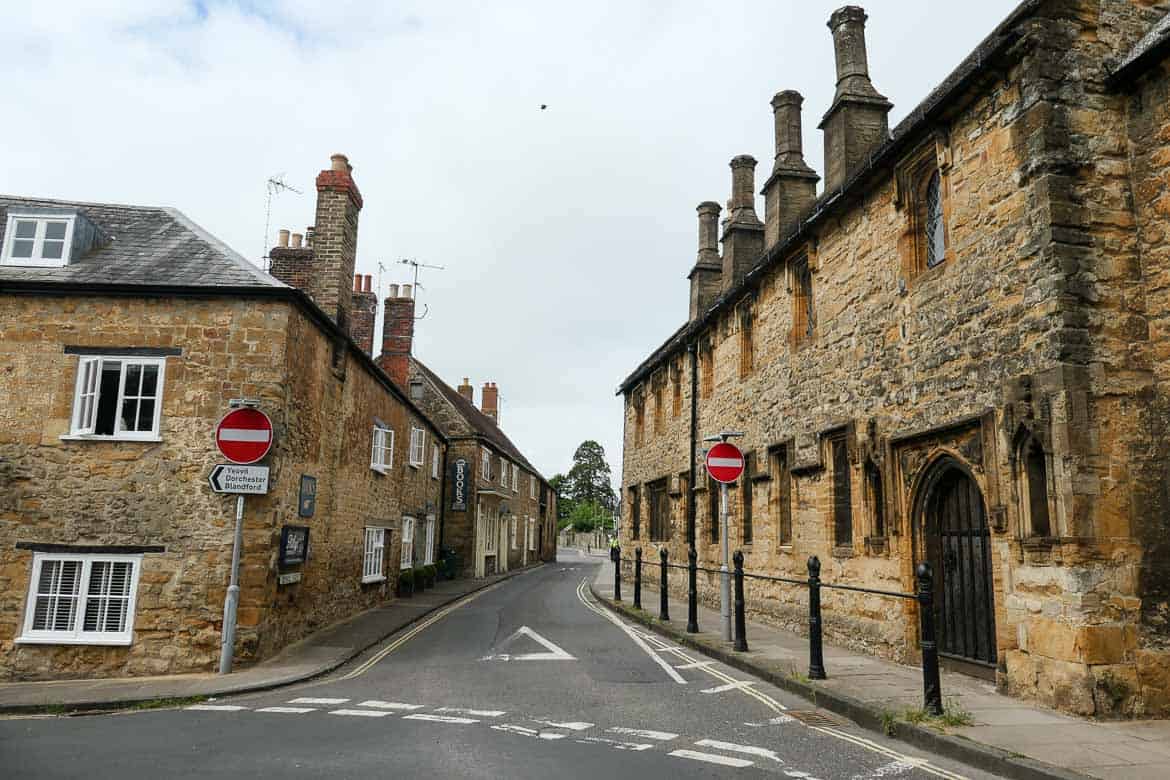 Travel – How to get to Sherborne, Dorset, UK

The town of Sherborne is in Dorset, just over the border from Somerset. The town can be reached by road, on the A30 west from Salisbury or east from Yeovil, or a short distance south of the A303.

Direct trains run from London Waterloo Station in the South (around two hours travel time) and from Exeter in the West. For timbetables and ticket pricing check your journey on the Trainline website.

Places to visit near Sherborne 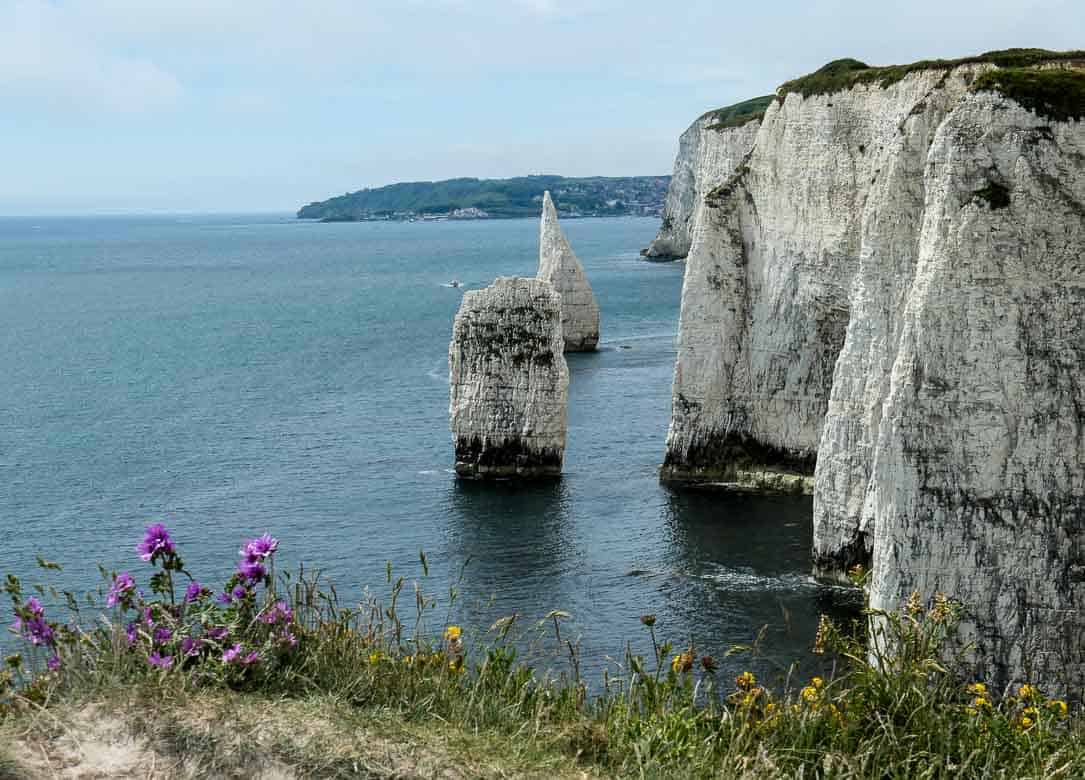 If you’re in the area for more than a day or two and there’s not enough to keep you occupied when you visit Sherborne then there’s plenty to see and do nearby.

Within half an hour’s drive of Sherborne are the Royal Army Fleet Air Arms Museum in Yeovilton, Clarkes Outlet Village and Hayne’s International Motor Museum.

Travel a little further afield and around an hour’s drive is Dorset’s Jurassic Coast where you’ll find some glorious beaches, Old Harry Rocks, Corfe Castle, Brownsea Island and Durdle Door. Stonehenge, Lyme Regis and Salisbury Cathedral are also within striking distance. If you love exploring coastal paths like this then you’ll love Seven Sisters Cliffs in East Sussex and the Isle of Wight coastal path. 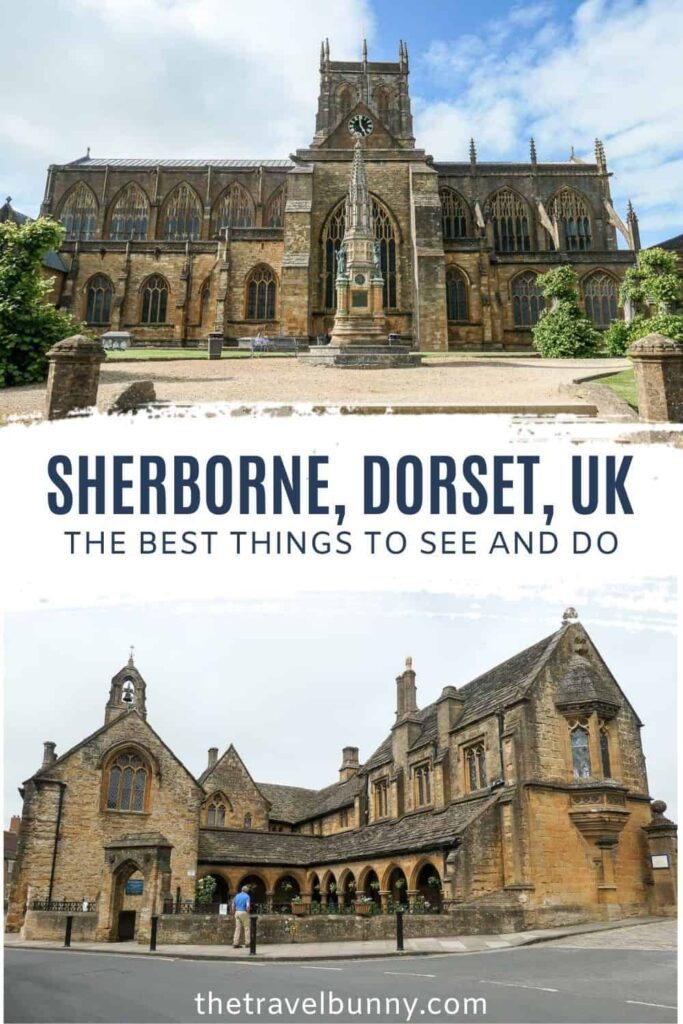 Amazing that you have a photo of the best shop in Sherborne D'Urberville but omitted to mention anything about it! Maybe you didn't venture inside. Three floors of French Antiques and the best cafe.

Sadly, as you can see from the image, it was closed while we were there. Sounds like we need to make a return visit to check it out

I must have been near Sherborne years ago, so now I'm sad I missed it! Definitely adding it to my google "want to go" map! Thanks for all the great information! Can't wait to visit in person!

It's a beautiful little town packed with history and some great places to eat. I love that you have a 'want to go to map'!

Not a place that I know at all, Suzanne, but it looks appealing. Especially the castle and gardens.

Definitely worth a weekend away there Jo - the castle gardens are beautiful.