After eating my way through Bologna, the food capital of Italy, I took the one-hour train journey down to Rimini. There we met up with our fellow BlogVille housemates Erin and Norbert at the BlogVille apartments. From there we headed into Rimini’s Centro Storico for a quick exploration before sundown and a bite to eat.

Rimini’s pretty old town has a number of notable historic structures but one that really caught my attention was the ancient Bridge of Tiberius or Ponte di Tiberio at the end of Via Corso d’Augusto. 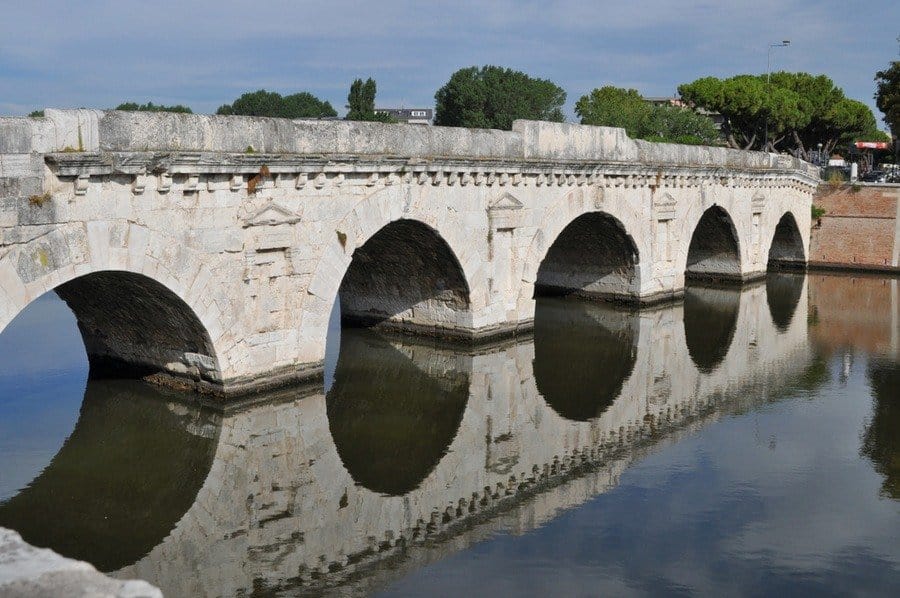 Can you believe that this bridge is almost 2000 years old? It’s one of the best preserved bridges from the Roman period and being such an old soldier it’s a bridge with baggage.

In 14 AD the Emperor Augustus ordered that a bridge be built over the River Marecchia which would ensure that Via Emilia, one of the Roman Empires’ five most important roads, could continue its planned route north – the bridge marks the start of Via Emilia.

Seven years later in 21 AD under the rule of new Emperor Tiberio, the bridge was completed. An inscription on the inner parapet tells as “given by both emperors”.  The bridge can also be referred to by its Latin name as Ponte d’Augusto.

Built entirely from white Istrian limestone, the Doric style bridge has five arches is 70-metres long and showcases the technical expertise of the Romans. They built the bridge without separating the foundations of the individual pillars thereby creating a solid structure that has stood both the test of time, and attempts by both man and nature to destroy it.

Alive with history, Tiberio has survived earthquakes, floods and wartime attacks and escaped intact from the 551 war between the Goths and Byzantines. More recently, during WWII, it was the only bridge over The Marecchia to survive destruction attempts by the Germans on their retreat from the Battle of Rimini.

The bridge connects Rimini city centre with the more historic downtown of Borgo San Giuliano.  The houses in this small fishing village are painted with colourful frescos and murals depicting the life and works of film director Federico Fellini who was born in Rimini.

There are also some lovely little restaurants and bars where we enjoyed our first piadinas in Rimini – a filled flat bread originating from the Emilia-Romagna region.

The water flowing beneath the bridge today forms part of Rimini’s marina, the River Marecchia was re-routed some years ago to prevent flooding.  The bridge is still well used by both pedestrians and traffic although heavy vehicles are now forbidden.

The narrow raised walking slabs either side of the road are worn smooth and shiny and it’s rare that there’s not some sort of vehicle using the bridge at any one time.  It’s still very much a working bridge. In 1885 the bridge became a national monument – and not a minute too soon!  I hope this beautiful bridge that’s stood the test of time is still standing in another thousand years to come.

It's a wonderful old bridge! Thanks for stopping by :)

Thank you Madhu, it's incredible when you think how old that bridge is.

I am fascinated by bridges. This is a great story of one of them. 2000 yo!! Unbelievable! Enjoyed the photos from all possible angles too. Thanks!

Thank you for dropping by and so glad I've introduced you to another bridge :)

What a beautiful bridge with quite a history! It sounds like you had a lot of fun in Italy... :)