Of the three epithets bestowed upon Bologna;  La Dotta – The Learned, La Rossa – The Red and La Grassa – The Fat, it was the latter, fatter moniker that caused me most concern. Bologna food. I have little willpower where food is concerned and knew I would return from Italy a good few pounds heavier, three if you must know, having gorged myself on pasta, succulent cured meats, gelato and yet more gelato.  Let me share the foodie delights that Bologna, food capital of Italy, brought to the table. 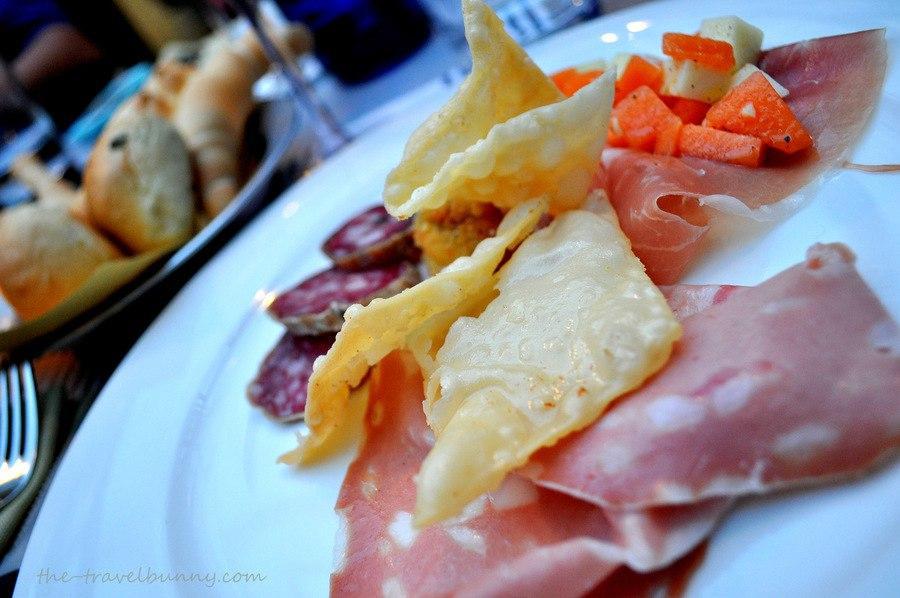 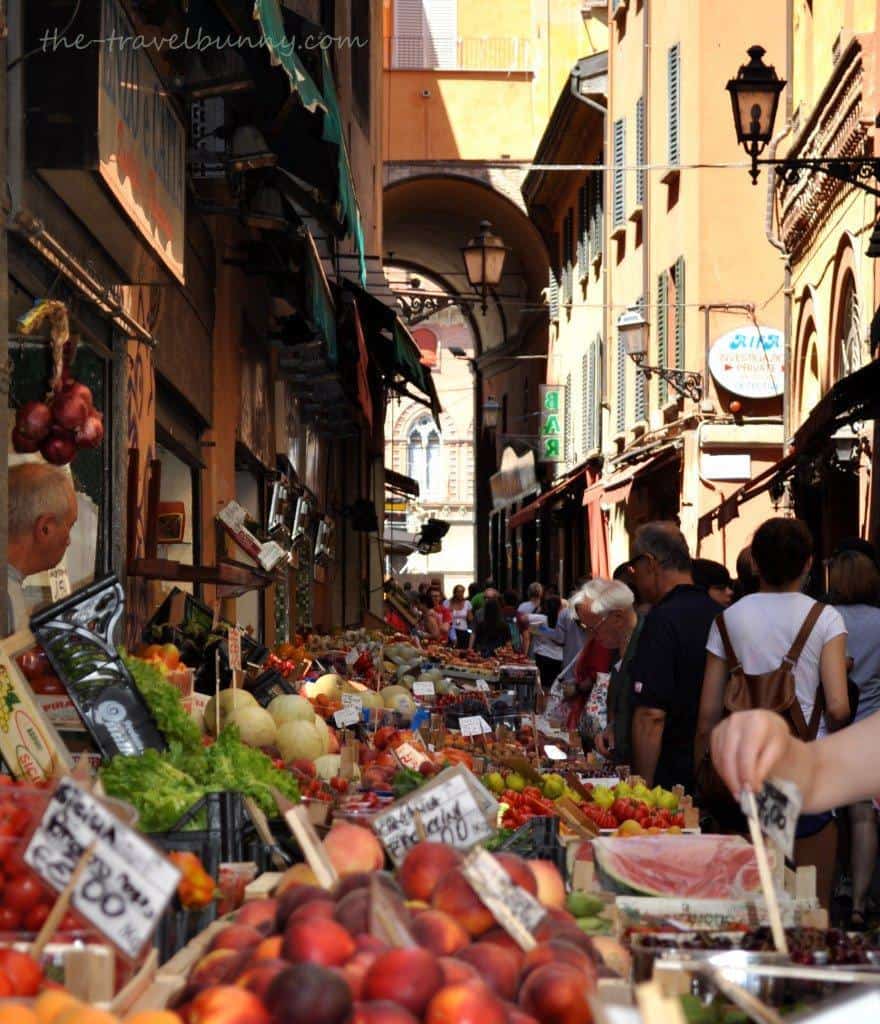 Step a street or two back from Piazza Maggiore and you’ll find the Bologna food markets tucked away in a network of back streets. The city’s merchants have bought and sold there since medieval times. The shade-filled alleyways of Via Clavature, Via degli Orefici and Via Pescherie Vecchie are lined with stalls displaying ripe, succulent fruit, vibrantly coloured vegetables and the freshest of fish. 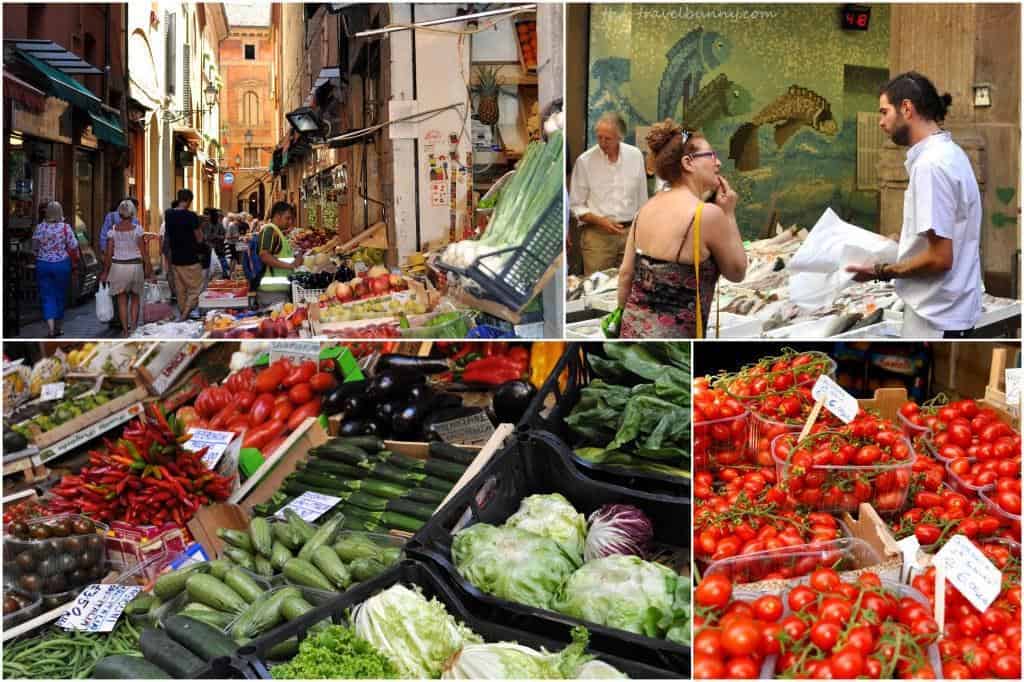 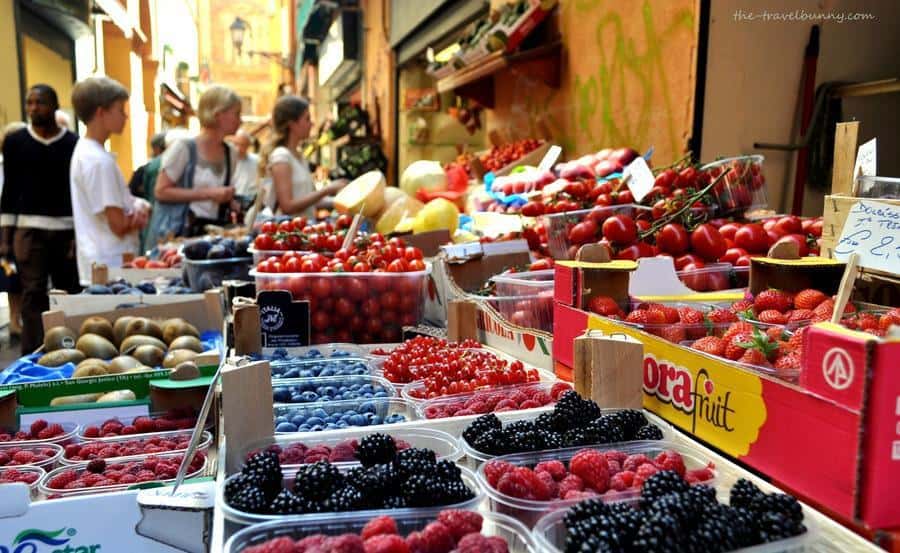 In Bologna salumeries abound, tempting passers-by with cold-cuts, cheeses, Balsamic vinegar and Mortadella. Mortadella is an age-old, cured and spiced pork sausage which originated in Bologna – sometimes known as Baloney. Legs of prosciutto ham loiter from the ceilings. You can choose which part of the leg you’d like your meat sliced from. One side is better for eating as an anti pasto with cantaloupe melon or fig, the other good for sandwiches or cooking. Bologna food doesn’t get much better than this. 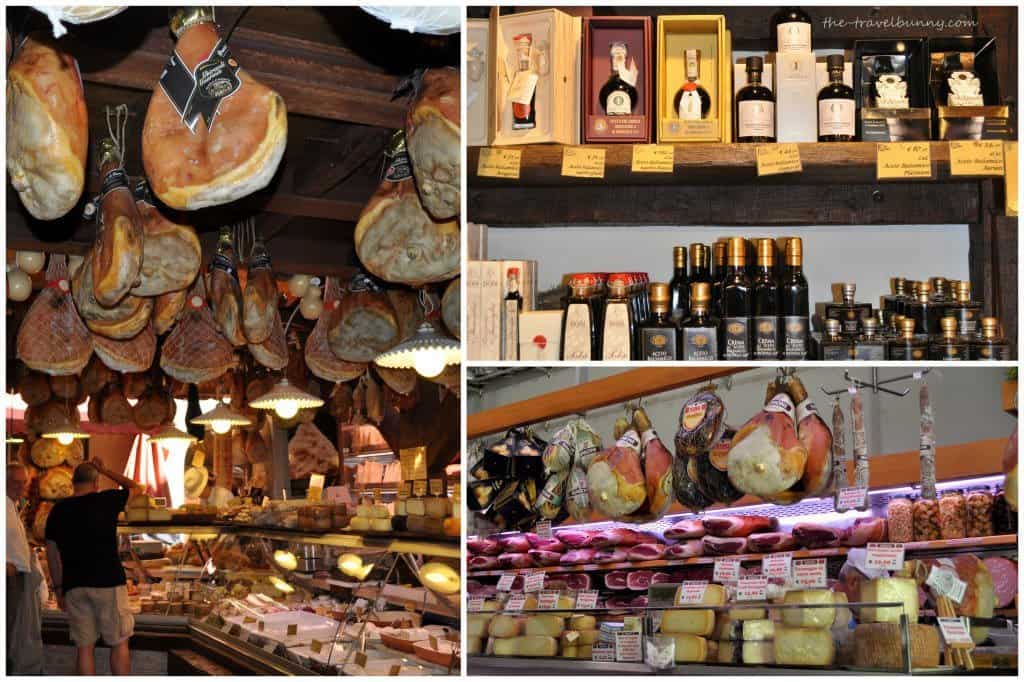 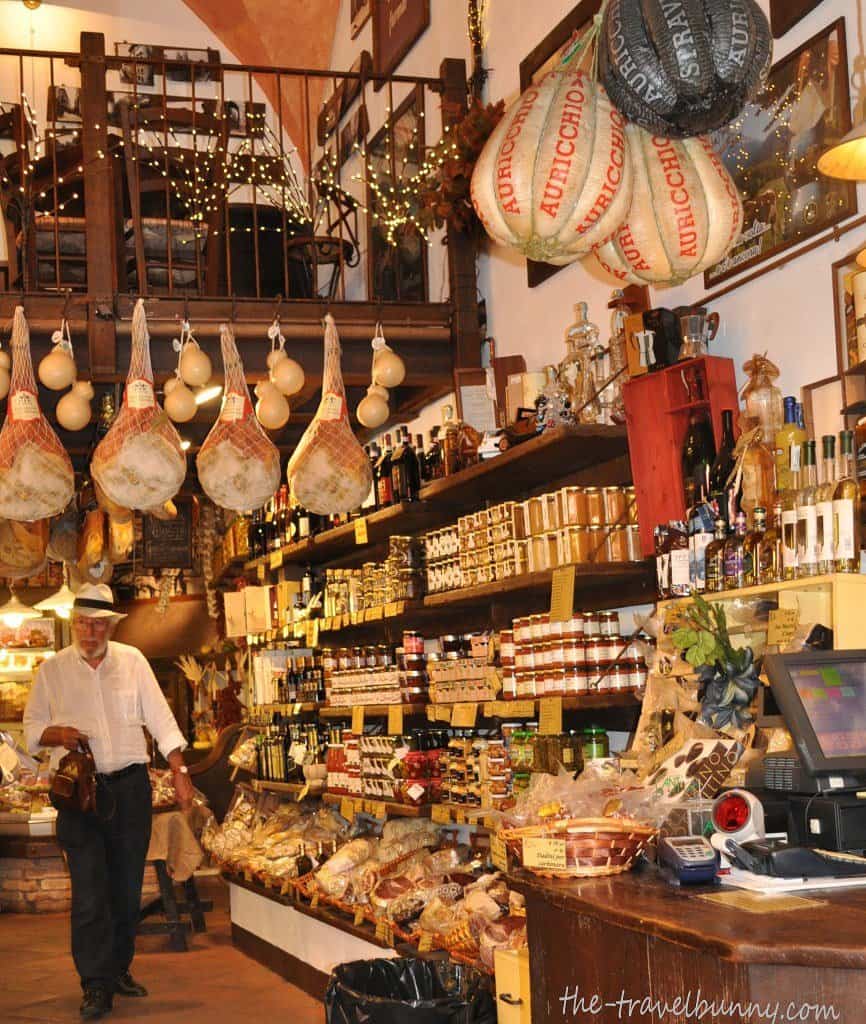 Cheese is big in the Emilia-Romagna region and tantalising aromas waft from the many formaggerias. There’s enough cheese here to quell the strongest of cheesy cravings. Huge wheels of Parmigiano-Reggiano from Parma tempt the nostrils. Formaggio di Fosse, a cheese ripened in pits to an ancient recipe cause an excess of salivation. Pecorino rests temptingly at nose-level on the counters of well-stocked, gourmet cheese shops. This is indeed cheese heaven. 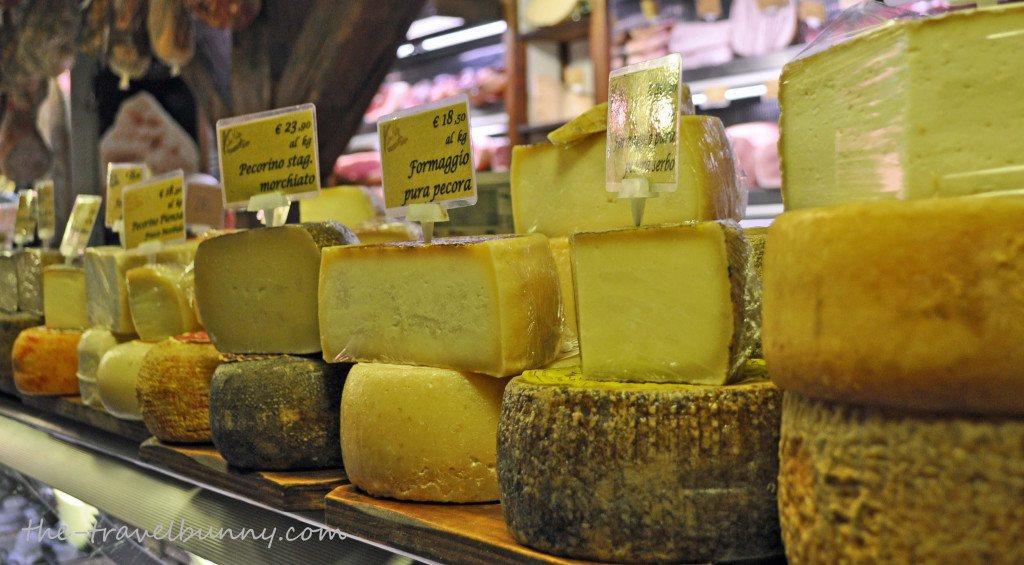 You won’t find Spaghetti Bolognese in Bologna. I know, we looked. Fortunately a friendly waiter enlightened us. Bolognese sauce is known simply as ragù and is never served with spaghetti. Ever. It’s served with tagliatelle ribbon pasta which was invented in the city. The rich, meaty sauce and golden, eggy pasta really hit the spot after a long days sightseeing. The Chianti went down well too. If you’re looking for authentic Bologna food this is the dish to go for.

Where to eat in Bologna

Bologna took pasta to a whole new level. My travelling companion, Kathryn, discovered Trattoria Serghei a tiny osteria on Via Piella. The waiter didn’t speak English and the menu was in Italian. Unsure what I was ordering I chose Tortelloni di Zucca. My first mouthful was a moment of culinary heaven. Each, perfect, al dente, ravioli parcel contained soft buttery pumpkin with just a hint of sweetness – mouth-wateringly superb. 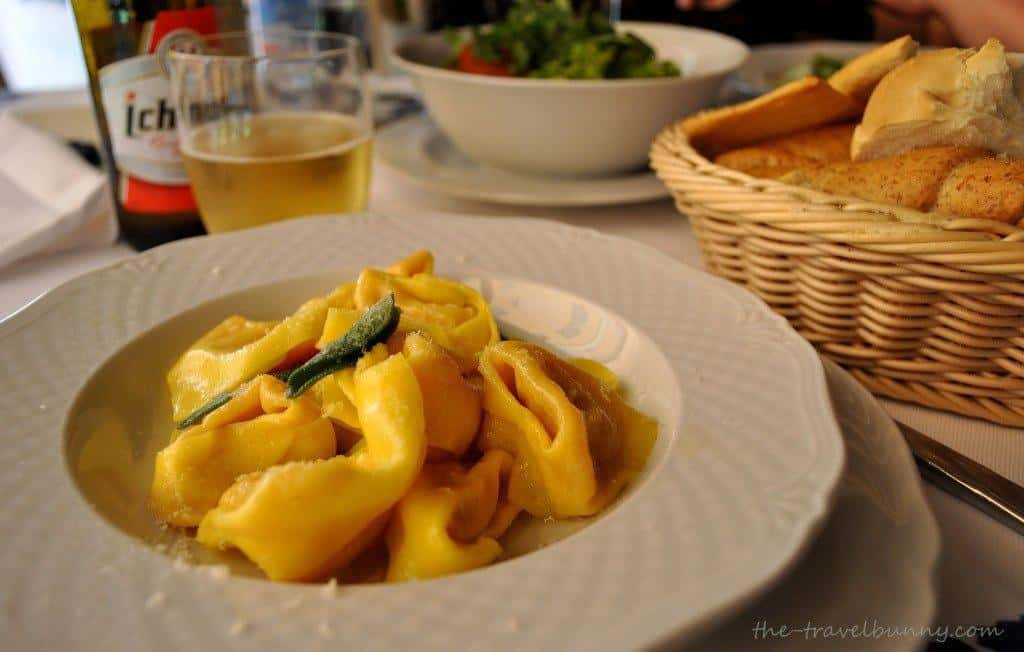 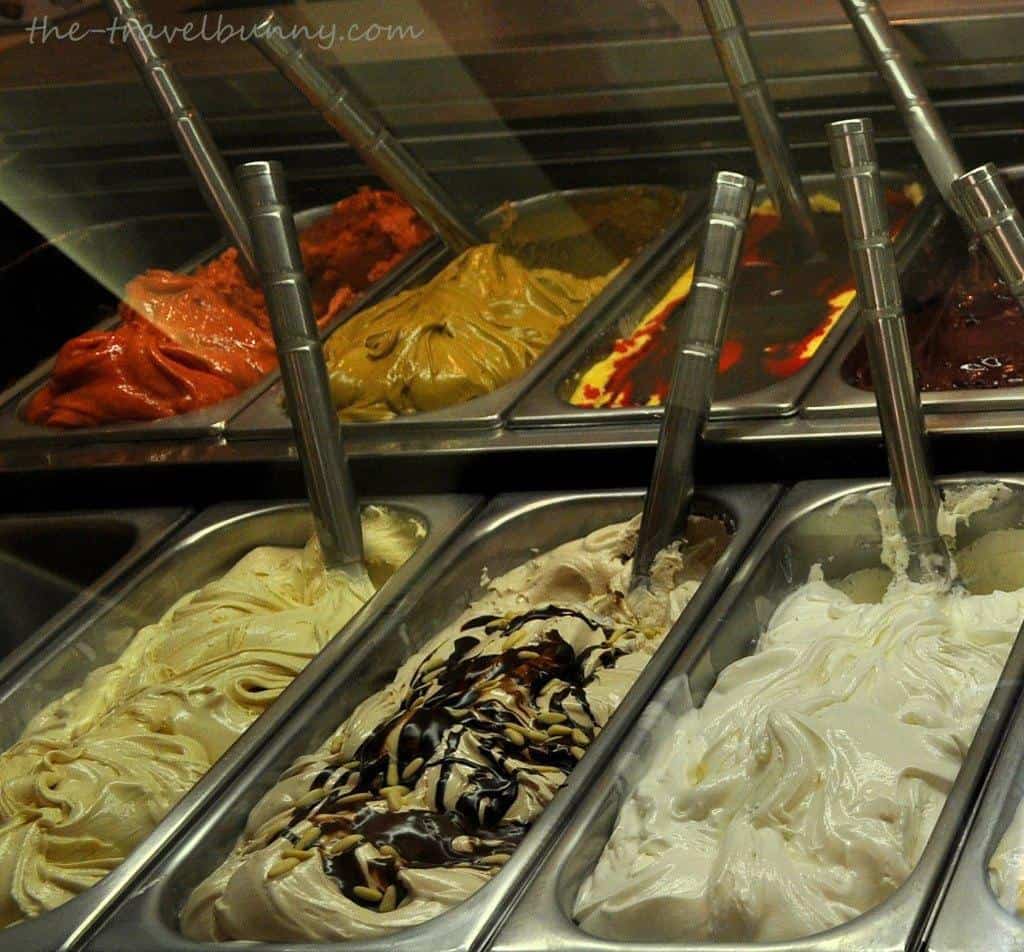 Bologna was the venue for my first ever Gelato. Refreshment called and I couldn’t decide whether to have a coffee or a gelato when inspiration hit. Coffee gelato!  Kathryn went for dark chocolate and when I saw it I have to confess to a little gelato-envy.  However, mine too was magical; a cone full of silky-soft, creamy deliciousness and the first of many…  Hopefully walking some of the many miles of Bologna’s porticoes helped burn some of those gelato calories off.

One of the best day trips from Bologna is a visit to the Bologna gelato university where you can learn how to make your own gelato and find out about the history of gelato. I tried chocolate and bacon gelato when I visited!

Next time I visit I’d like to take a food tour in Bologna – one of my favourite activities when visit a city. Read more about all the food tours I’ve taken on my travels.

So there it is, a food-fest worthy of all the fuss? Gastronomic Bologna is La Grassa for good reason in a city where over-indulgence is compulsory…

A Journey Around Europe | The Travelbunny

[…] had a fabulous year of travel in Europe visiting Paris, Bologna, Venice, Amsterdam, Sorrento, London and I had an all too brief stop in Rome last weekend.  Bruges […]

[…] Bologna is the food capital of Italy there were lots of culinary outings, including a trip to the Gelato University, where I discovered […]

Thank you for reblogging this - I'm heading back to Bologna next week so I'm really looking forward to all that wonderful food all over again!

hi! next time you come to Bologna, be sure to look me up. I'll be happy to show you how to make the tortelli di zucca you enjoyed so much. :) I teach pasta making at Taste-of-Italy.com

Thanks Maribel - I'll be back in September with Blogville but not sure of my daily plans yet. Would love to learn to make it and can't wait to taste it again!