Long-haul adventures are always exciting but I love exploring the UK too. We’re lucky to have an amazing choice of unique destinations filled with history, Areas of Outstanding Natural Beauty, World Heritage sites and a quirky charm that only the UK can offer. This year has seen me exploring Ilfracombe and the craggy coasts of beautiful North Devon in south west England. I’ve also been somewhere I’ve wanted to visit for the longest time. The Cotswolds has eluded me until this year when I finally got to visit the area. We did it in style with a stay at The Wood Norton Hotel in Evesham a luxury Cotswold Hotel. 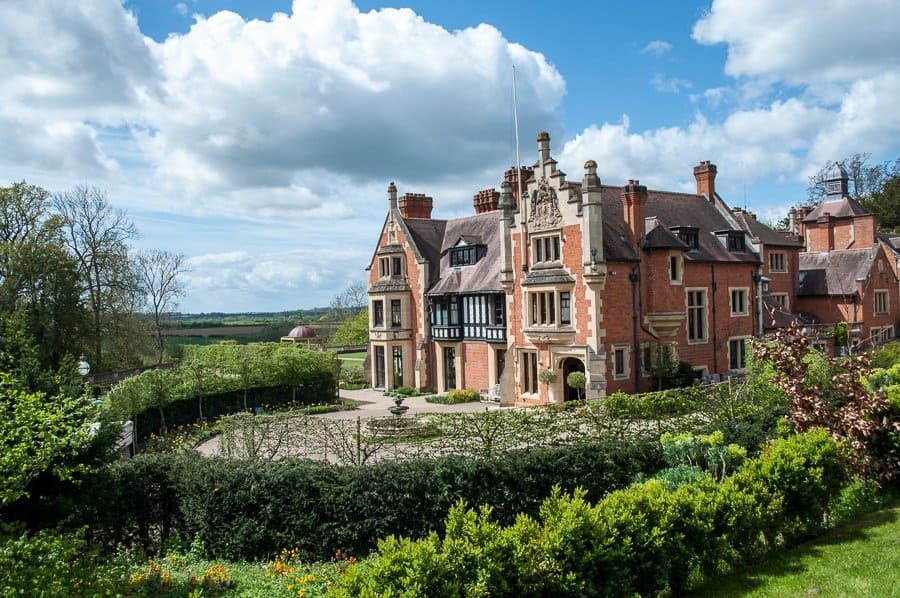 The Wood Norton is a luxury hotel in The Cotswolds, a huge rural area in central south England, touching on six counties. It’s set in beautiful countryside near Evesham, Worcestershire between two areas of Outstanding Natural Beauty. Perfect for long country walks and exploring the Cotswolds. The northern edge of the Cotswolds sits to one side and the rolling Malvern Hills on the other. The imposing Grade II listed hotel is one of the Cotswold’s best luxury hotels; brimming with character, charm and an added blend of historic country house style and contemporary design. 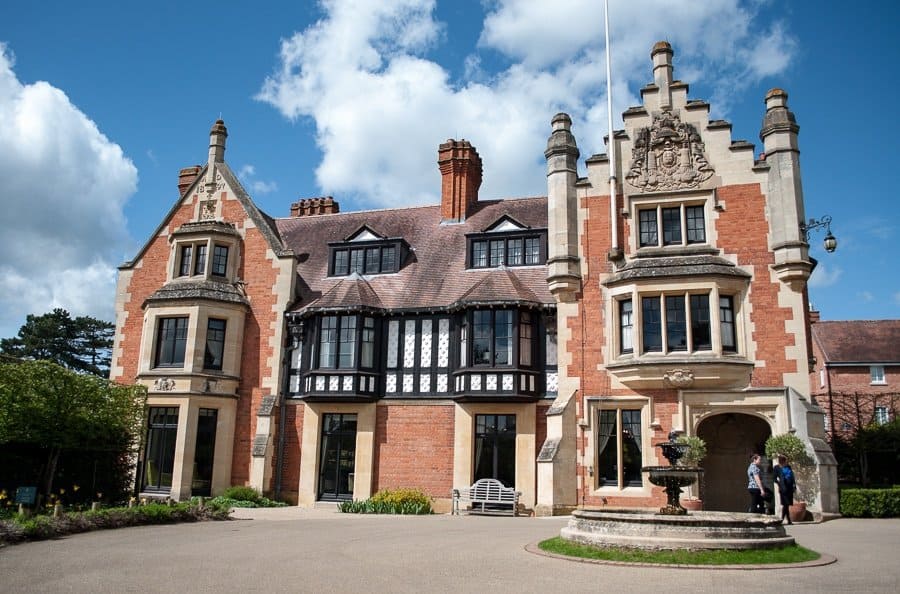 Check rates and availability at the Wood Norton

The Wood Norton has a varied history and was built in 1897 by the Duc D’Orleans, exiled French Royalty and pretender to the French throne. Numerous examples of the Duc’s fleur-de-lys motif can be spotted around the house and grounds. His original bathroom complete with mosaic floor remains although it doesn’t look particularly comfortable. Wood Norton served as the family’s grand home and royal retreat until 1912. 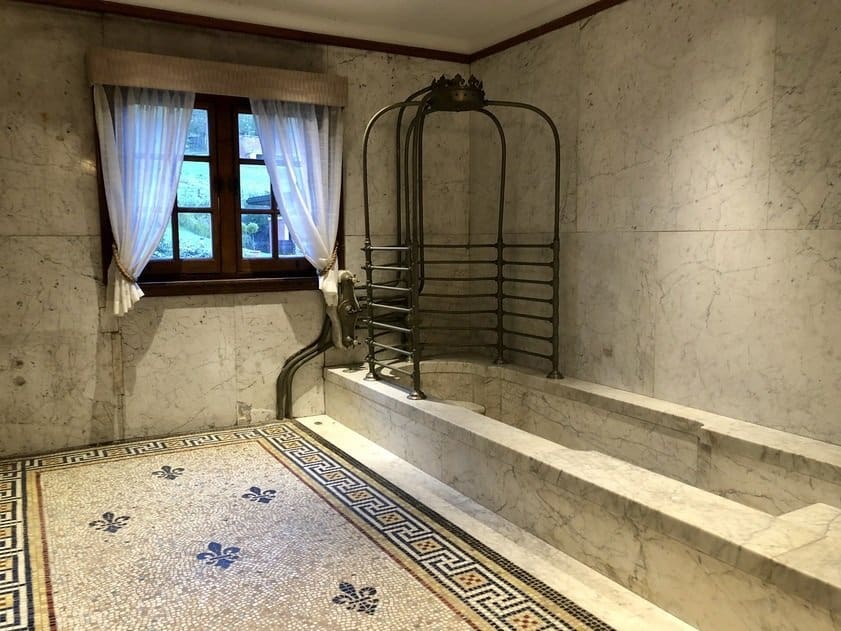 The BBC bought the estate in 1939 as an emergency broadcasting base so it could move from London in case of evacuation during WWII hostilities. They built 12 studios and by 1940 it was the largest broadcasting centre in Europe. After the war it became the Beeb’s engineering training centre and still has studios and training areas on the estate. There are rumours of an underground nuclear bunker on the site but the BBC mysteriously refuses to confirm this. After the house was refurbished in 2011 it was turned into the luxury Cotswolds hotel it is today.

Read more: What to see and do in Ilfracombe, North Devon

The hotel is everything you’d expect from a royal retreat replete with oak-panelled walls and ceilings, vast fireplaces, beautiful grounds and infinite views of the countryside. The formal French garden, designed by English Heritage, the perfect spot for a mid-morning coffee or lunch on the terrace. 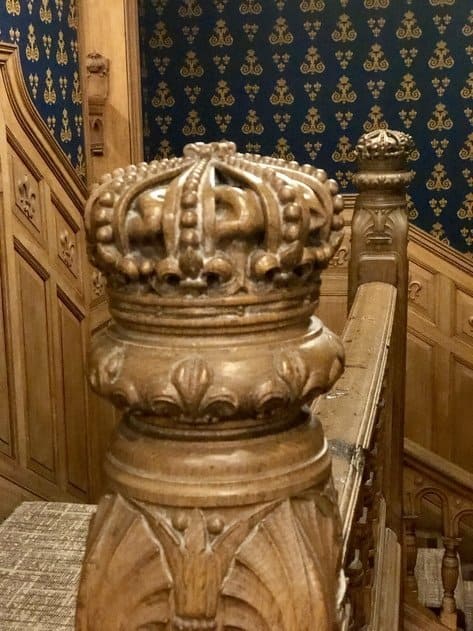 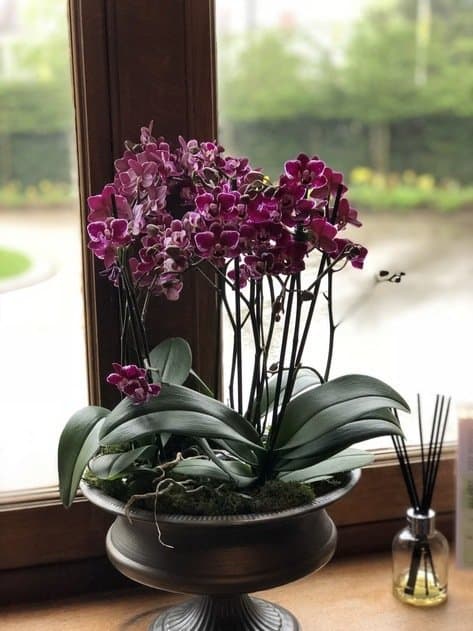 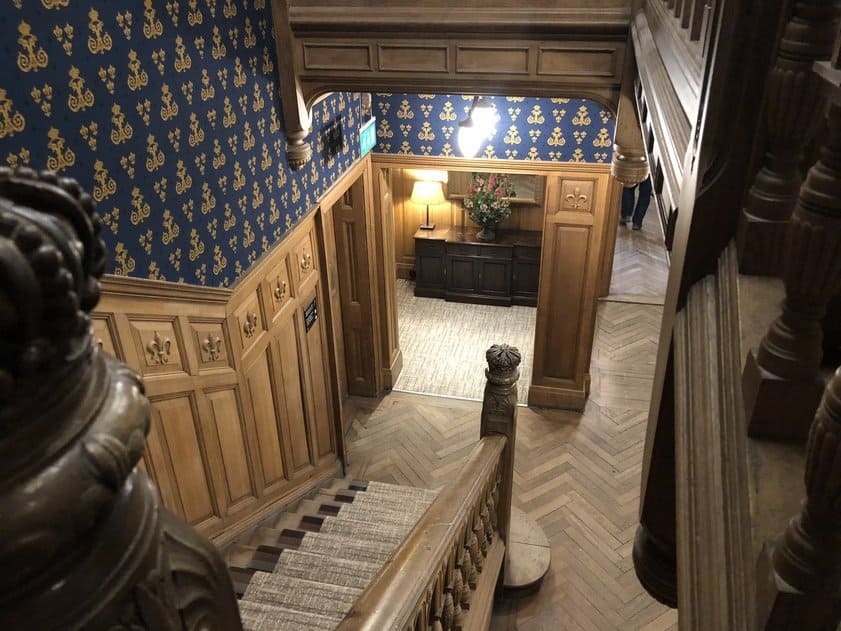 The Wood Norton has fifty rooms including five gorgeous suites. We were in ‘The Balcony’ a spacious corner suite with double aspect windows, oak-panelled walls and ceiling and huge fireplace although, strangely, no balcony. The giant king-sized bed was beautifully comfortable with soft down duvet and pillows and we both slept incredibly well. 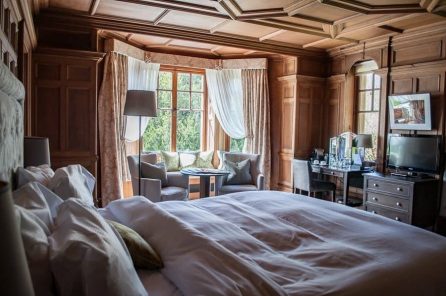 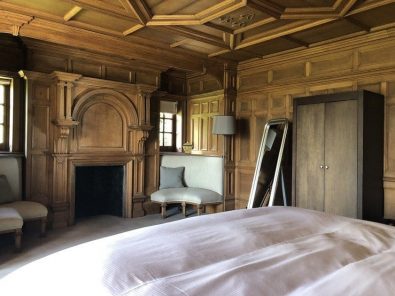 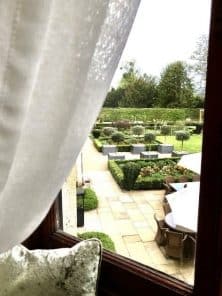 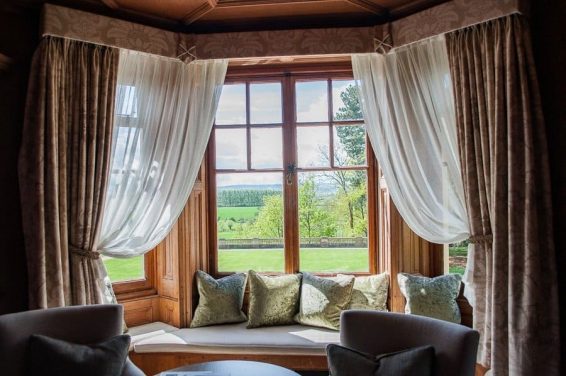 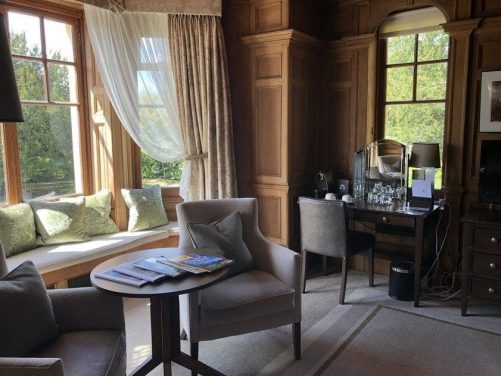 I loved the window seat in the enormous bay window but didn’t get much reading done because the views of the gardens below and the countryside were so mesmerising. A small table and two chairs made the perfect spot for a cuppa and a flick through some travel magazines which were thoughtfully provided. Tea and coffee-making facilities with biscuits were in the room. There was also a desk with Nespresso machine but we certainly didn’t feel the need to do any work while we were there. Ample space to store clothes in the chest of drawers and wardrobe was appreciated and we we found two fluffy bathrobes plus slippers to slip into and relax.

The roll top bath tub was the star of the large bathroom and wonderful to sink into after a chilly day exploring some nearby Cotswold villages. The huge rainfall shower was good and powerful but I was surprised not to find twin basins in a bathroom that size. We indulged in a choice of Molten Brown toiletries and copious amounts of soft, fluffy towels. 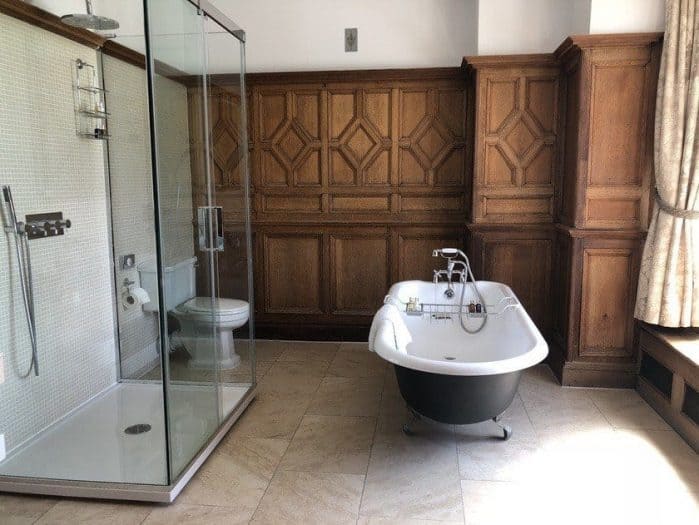 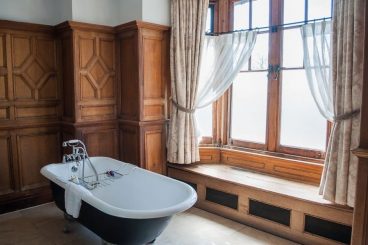 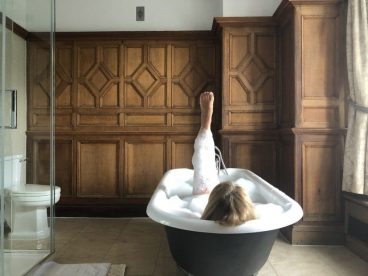 When we’re away we indulge in a pre-dinner drink tradition so we headed for the hub of the hotel, the bar, for a Gin and Tonic. The bar overlooks the formal French garden and is furnished with a mix of brightly upholstered armchairs, design pieces and a long pewter bar. I chose the local Cotswold Dry Gin from the large selection of gins which was served, properly, in a Copa glass. Chin chin. 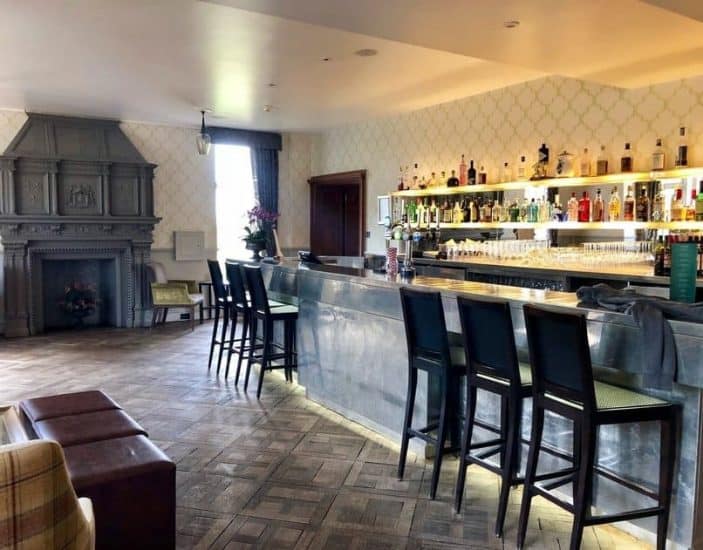 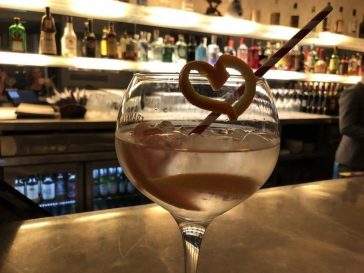 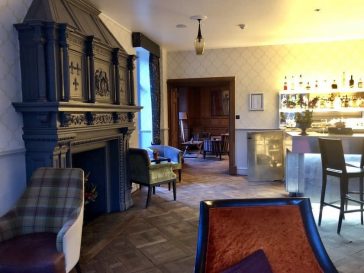 The hotel’s main restaurant, the Fleur de Lys Restaurant, was busy for a group booking so we ate in the contemporary Fleur de Sel Brasserie and chose from a delicious menu featuring the finest of local produce. After a starter of cured salmon gravlax both Mr Jones and I chose Udale fillet steaks which were perfectly cooked and as ordered. Sides of seasonal veg and sweet potato fries (they were happy to change from hand-cut chips) completed the main course. We chose a Malbec to accompany. 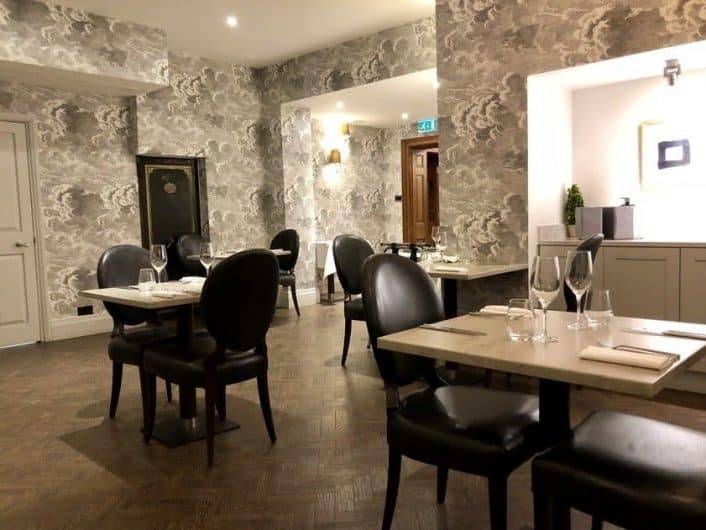 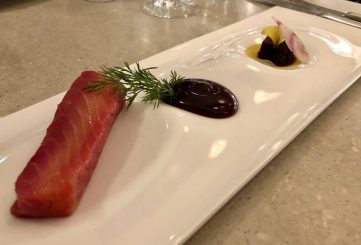 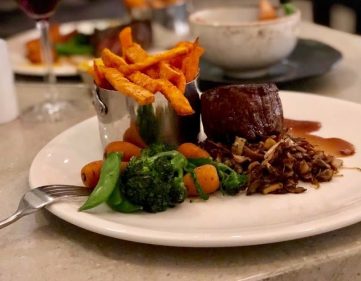 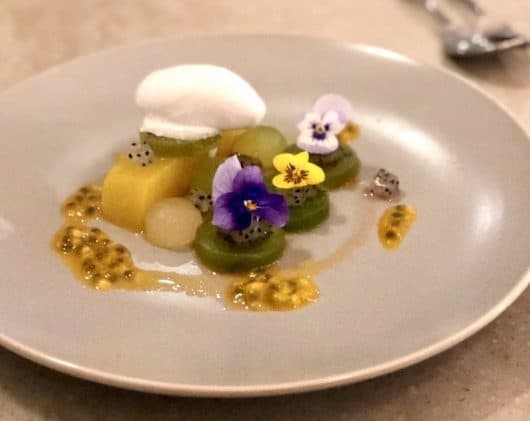 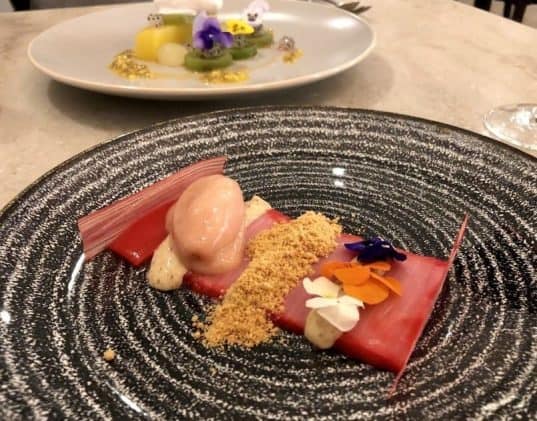 For dessert I went for the rhubarb and smoked almond with ginger crumble and Mr Jones chose exotic compressed fruit salad which looked almost too pretty to eat. Almost.

After an excellent night’s sleep we enjoyed a lazy breakfast in the Fleur de Lys restaurant which opens out to the terrace. I’m so glad we got to experience this restaurant before we left and would have felt slightly cheated if we hadn’t. We started with coffee, juice, fruit, yoghurt and fresh honeycomb from the continental breakfast buffet which was beautifully set out in the dining room.

We ordered from the menu for our main. I’m trying to be vaguely healthy at the moment so I went for bacon, poached egg, tomato and mushroom. Mr Jones, a creature of habit, ordered a full English with all the trimmings. The breakfast was excellent, as was the service, and set us up nicely for another day of exploring the Cotswolds before heading home. 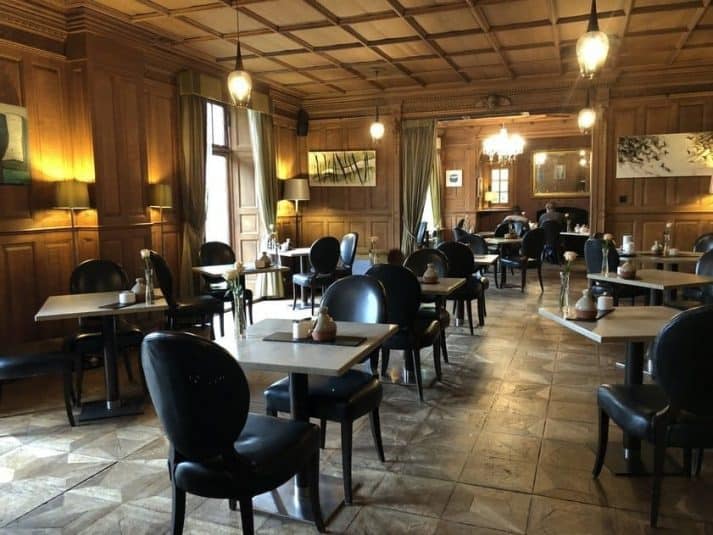 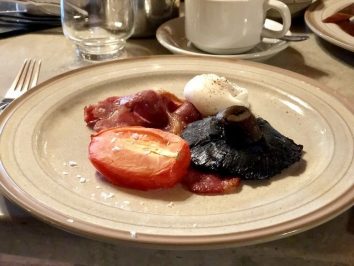 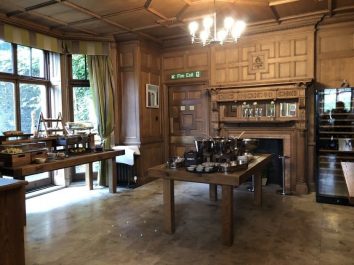 Although our stay at the Wood Norton was brief, we packed in a whole lot of good food and luxury country living and left feeling completely relaxed. It was also the perfect base for exploring the nearby towns of Evesham, Broadwater, Broadwater Tower and the perfectly picturesque Snowshill. 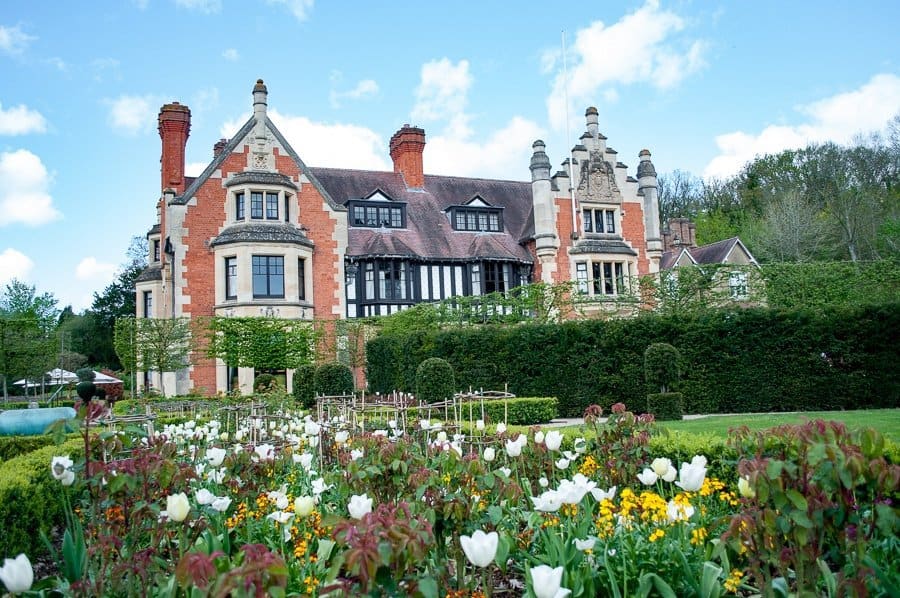 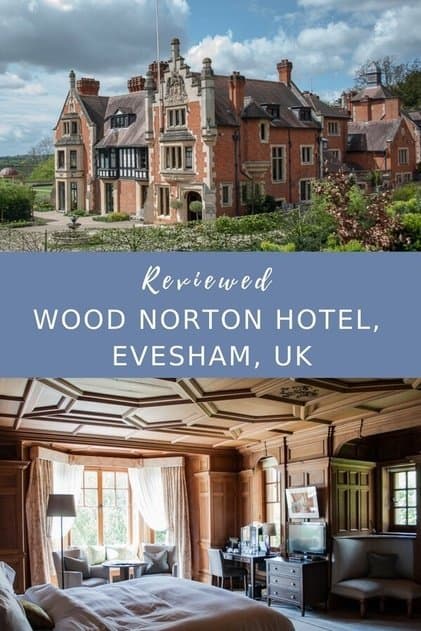 I was a guest of The Wood Norton Hotel, however all views and opinions are entirely my own.