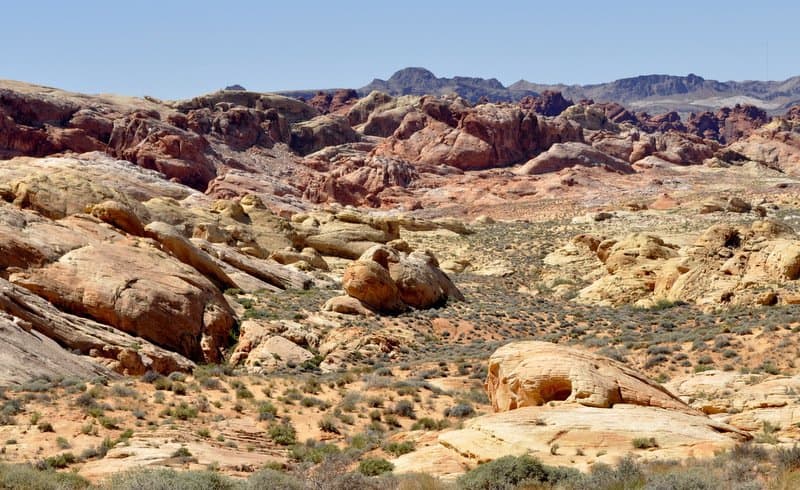 A day trip to the Valley of Fire from Las Vegas

When the bright lights and craziness of Las Vegas have burnt you out; when you’re done with the bells and whistles of the casinos and the neon lights of The Strip are indelibly etched into your mind’s eye it’s time to strike out and see a different side of Nevada. Take a day tour from Las Vegas to the Valley of Fire State Park. 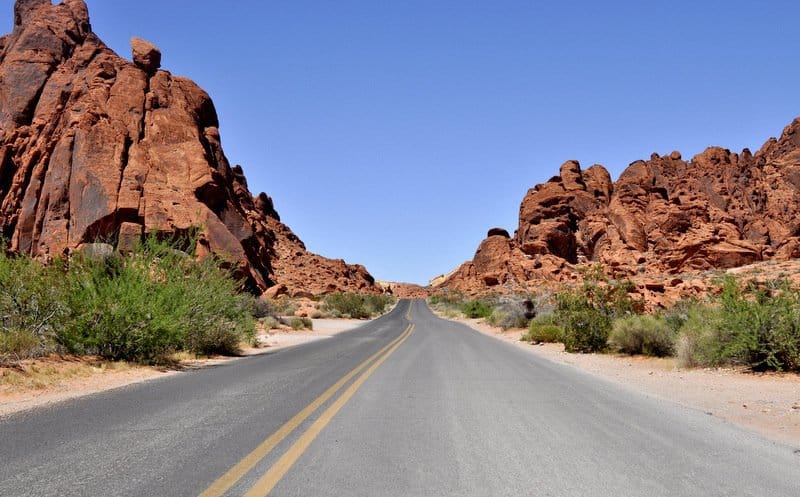 Just 50 miles North East of Las Vegas you’ll find a startlingly different world from The Strip. The sun highlights a landscape ablaze with colour; russet-red, ochre and amber. It’s a landscape of rock arches, domes and colourful vistas shaped and contoured by wind, water and weather.

Vibrant layered sandstones, shales and fault lines in the rock form the varied and fascinating landscape of The Valley of Fire State Park.

After entering the state park and passing through a rippling red terrain, the result of continuous faulting and soil erosion, we came to our first stop at The Beehives. The large sandstone structures, subjected to years of erosion by wind and water, have formed into unusual beehive shapes. 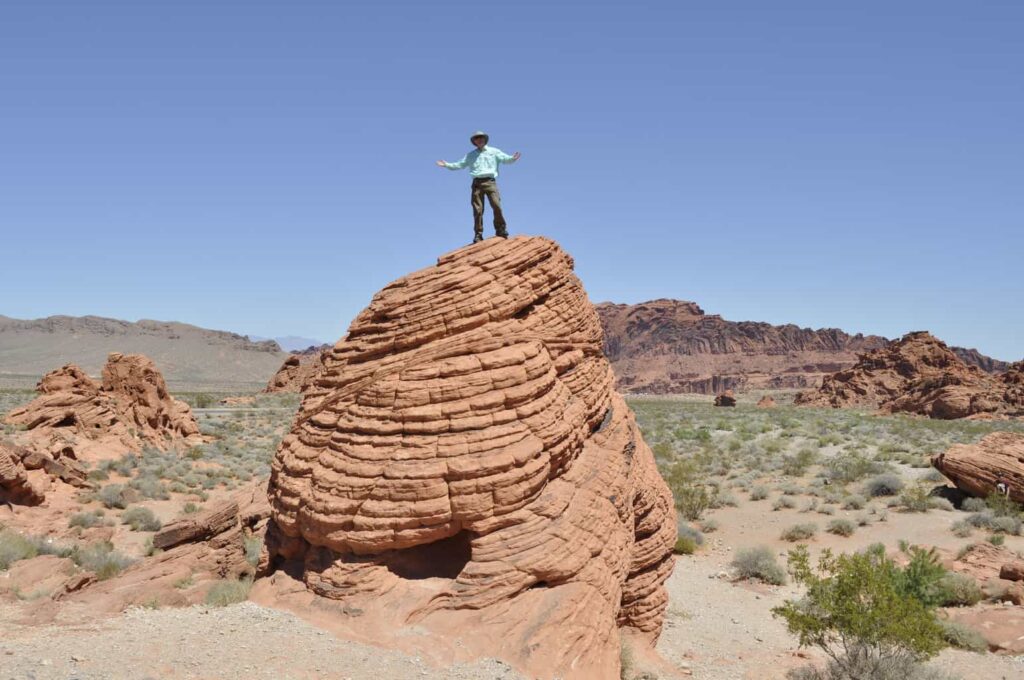 The next stop on our Valley of Fire tour was Atlatl Rock – atlatls are ancient weapons that preceded the bow and arrow in many parts of the world and are one of man’s first mechanical inventions.

We climbed up a metal staircase attached to the rock to view some ancient petroglyphs thought to be over 4000 years old carved by native American cultures. There were symbols that looked like footprints, trees, water and long-horned animals.

The photo of the petroglyphs below is just behind Atlatl Rock and show up the carvings more clearly. There are many areas throughout the state park where petroglyphs can be seen and we also took a short hike up a canyon trail later in the tour where we spotted more. Our guide was very into petroglyphs. 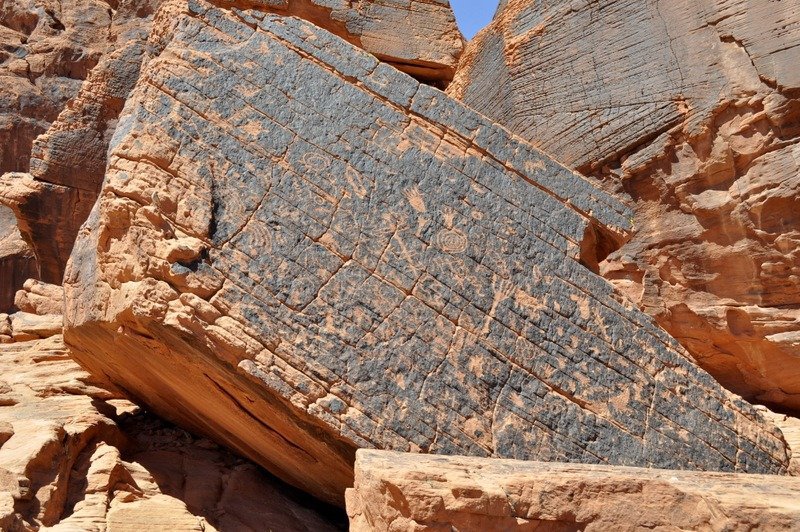 Three cabins, built by the Civilian Conservation Corps soon after the Valley of Fire became a state park in 1935 , are for travellers visiting the park. There’s a picnic area nearby where we stopped for lunch and saw some ground squirrels skorting around. The cute little creatures know where to go for easy pickings. There are many trails in the Valley of Fire and camping facilities for staying overnight. 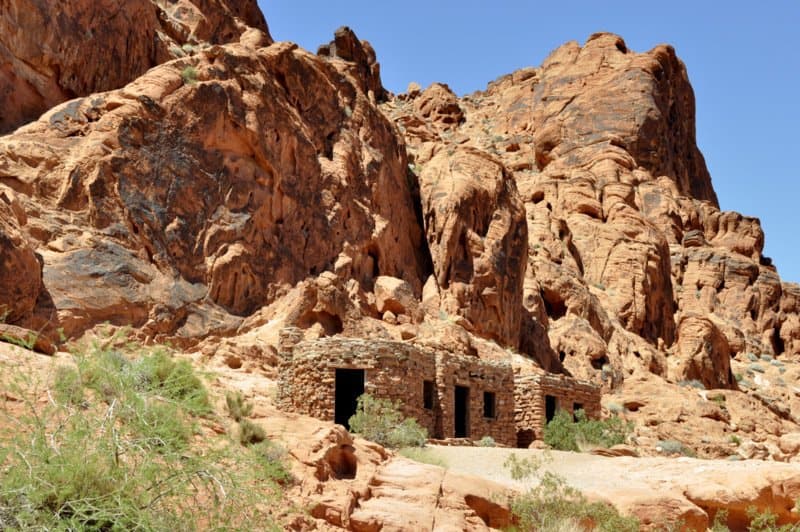 The Cabins, Valley of Fire

Rainbow Vista is a very different viewpoint from the red terrain you can see as you enter the Valley of Fire. The road here reaches the top of a low ridge looking out for many miles over a vast area of multi-coloured rocks. The road gives an idea of the scale of the area. 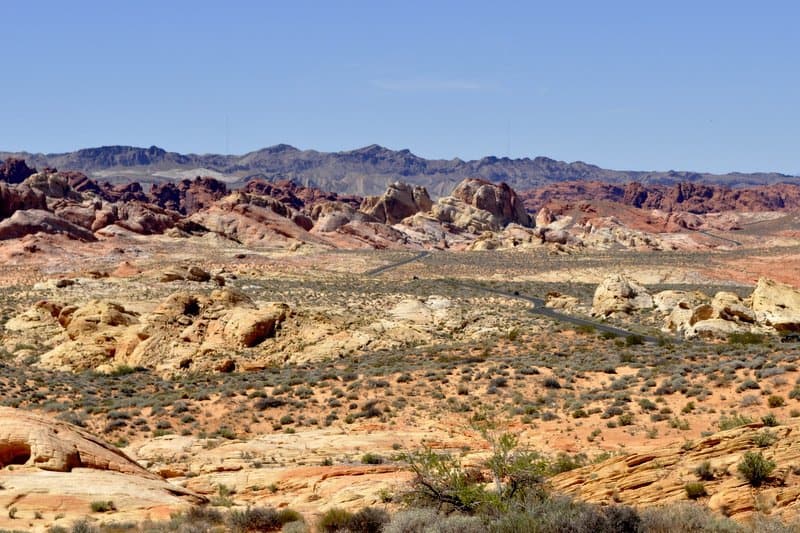 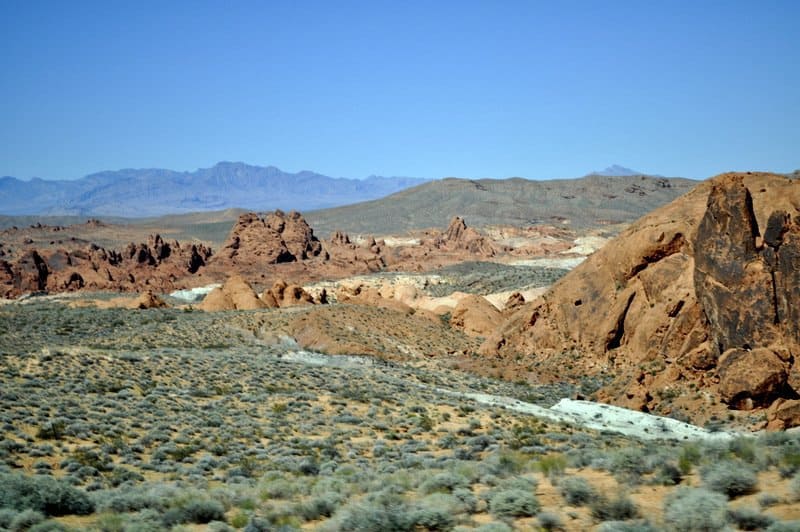 Just a short hike from the visitor centre is a famous Valley of Fire formation – Balanced Rock. How the top boulder stays balanced on the rest of the stack I’ll never know but I’m guessing it won’t be long before the balance tips. 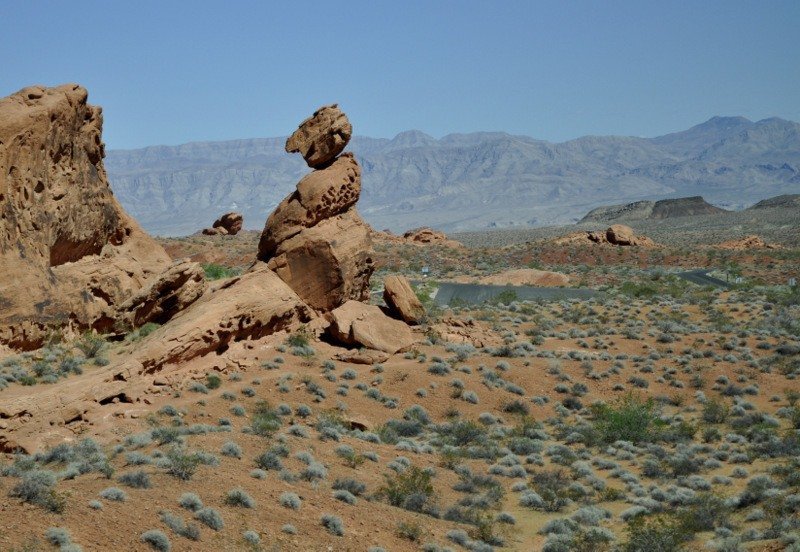 Balanced Rock at Valley of Fire 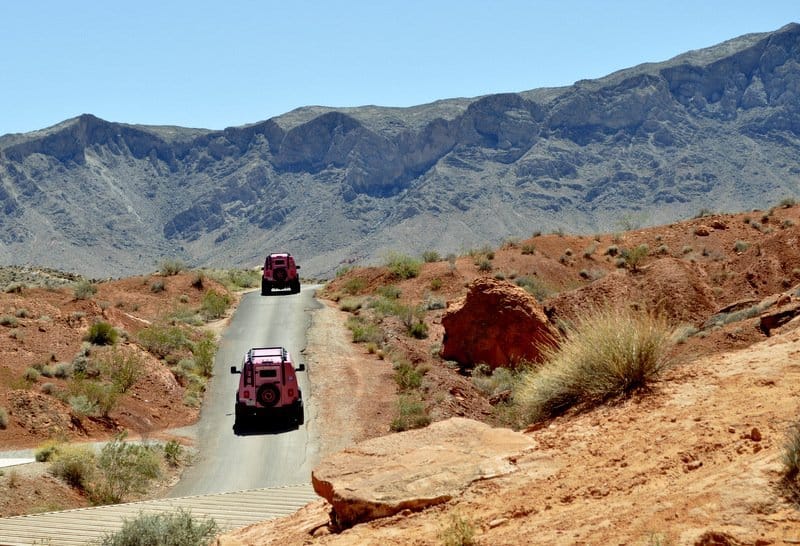 Pink Jeeps at Valley of Fire

Where is the Valley of Fire?

The Valley of Fire State Park is about 50 miles north-east of Las Vegas in the Mojave desert, Nevada.

Entrance Fees for Valley of Fire?

The visitor centre is open 8:30 AM – 4:30 PM each day with exhibits on the area’s history, geology and wildlife.

How to get to the Valley of Fire from Las Vegas

We visited at the end of April and it was HOT! Take a hat, plenty of water and sunscreen. 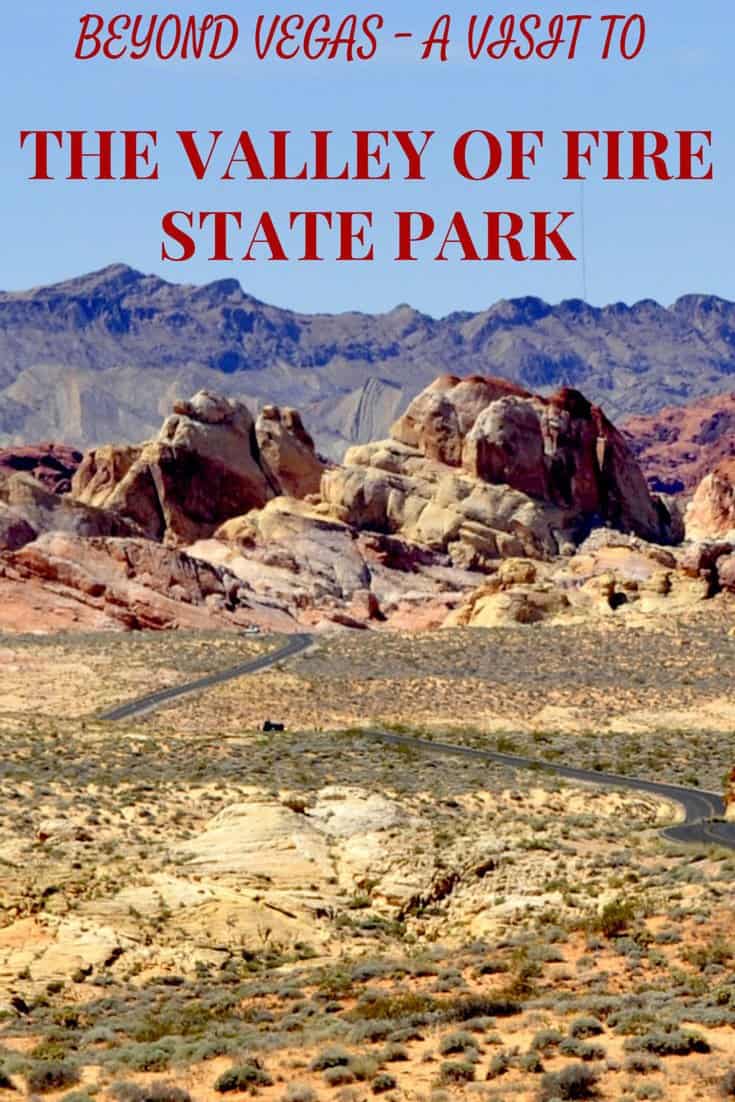 […] saw me finish up my Las Vegas posts with a visit to The Valley of Fire.  It’s a fantastic way to get beyond Vegas and explore some of the Nevada desert. Did you […]

I hope they have a great visit to Vegas

So gorgeous! My friend and I are going to Vegas in November, and we have a spare day to plan. I'd love to go here, it just looks so out of this world! x

It's a fab trip and really good to see a different side of Vegas. Enjoy!

Those images are impressive and I would love to go there. Last two trips to Vegas I missed the Valley of fire but I am planing on revisiting this fall so I can enjoy it. Again great pictures Suzanne.

It's really easy to visit The Valley of Fire from Vegas and perfect for a day-trip from the city. Hope you get there later this year :)

You can keep Vegas, Suze- I'll just have this one! What a stunner! I love it :)

It was so quiet out there too Jo - such a contrast to the city :)