Who else loves a bit of winter sunshine? We’ve booked trips to Tenerife in January for the past few years (not this year obvs) and it’s the perfect antidote to the gloom and chill of a UK winter. Here are my reasons for planning a trip in January with some of the best things to do in Tenerife and a few that are slightly off the beaten track. 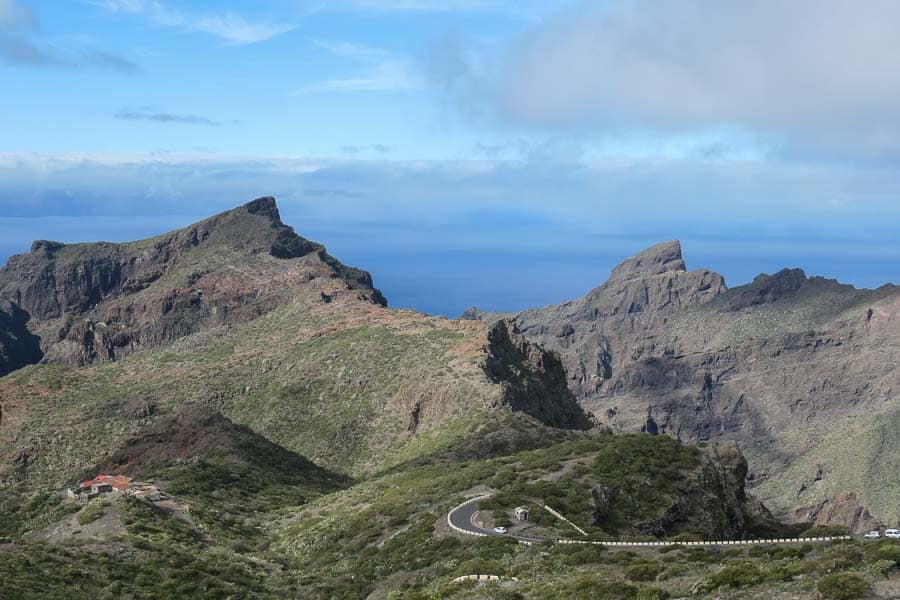 The road to Masca, Tenerife

Tenerife is part of the Canary Islands in Spain. It’s the largest of seven islands which include Lanzarote, Gran Canaria, La Gomera and Fuertaventura. The archipelago sits in the Atlantic Ocean off the coast of north west Africa.

Why Tenerife in January is a great idea

Believe me when I say I’m really missing our trip to Tenerife this year. A few days of sunshine in January helps get us through the winter months, plus there are loads of cool things to do in Tenerife.

I’ve lost count of the number of times we’ve visited the island, both on holiday and for work (back when we ran the events agency). But no matter how often I’ve been I always look forward to going back.

Tenerife is often seen as being all about beaches, bars and full English breakfasts but step away from the package holiday hotspots and you’ll discover a beautiful island with incredible natural landscapes and a wonderful climate.

There are so many fabulous things to do in Tenerife both on and off the beaten track. Explore volcanoes and lava fields, UNESCO world heritage sites and pine forests. Go whale watching, visit National Parks, authentic villages and swim in natural sea pools. Tenerife is perfect for outdoor lovers, adventurers and the food and wine is good too. 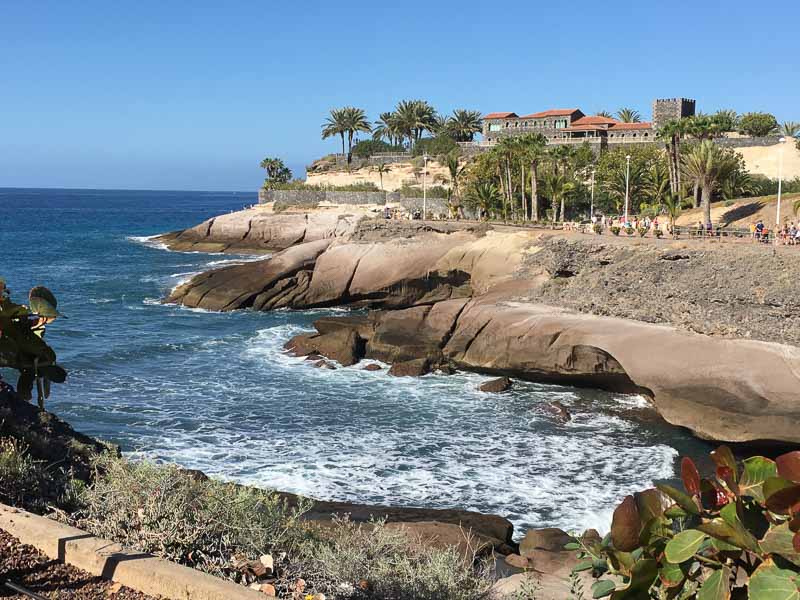 One of the top reasons for visiting the island is the year round warm weather. In January the weather in Tenerife is pretty good with an average temperature of 17°C and rarely falling below 14°C so it’s decent t-shirt and beach weather. Of the times I’ve visited, at least 20, I’ve only seen rain once and that was in November.

We’ve had glorious weather in January with clear blue skies and just the occasional cloudy day. Expect an average of six sunshine hours a day in January. Most of the photos in this post were taken in the month of January.

The Spanish Balearic islands are much further north so Menorca, Majorca and Ibiza are a lot cooler in January.

How to get to Tenerife

Tenerife is very accessible. It’s only a 4.5 hour flight away unlike many other winter sun destinations in the Caribbean or US. A huge choice of direct flights depart from all over the UK right through the year including loads of low-cost airlines. There are always great deals to be had. I like to check for flights on Skyscanner. There are two airports – Tenerife North and Tenerife South.

What is the best area to stay in Tenerife?

I really like Costa Adeje at the western end near Playa del Duque beach. It’s perfect for couples, a bit quieter and a little more upmarket than some parts of Costa Adeje but not too far away if you want something a bit livelier. One of my favourite Tenerife hotels is there too and it serves the best breakfast I’ve ever had at any hotel I’ve ever stayed at. And there are a few.

There’s a range of accommodation in Costa Adeje from gorgeous 5* hotels to all-inclusive resorts and apartment rentals. It’s only 15-20 minutes from the airport by cab but I recommend hiring a car. There are loads of cool things to do in Tenerife and driving yourself around the island is the best way to see them. 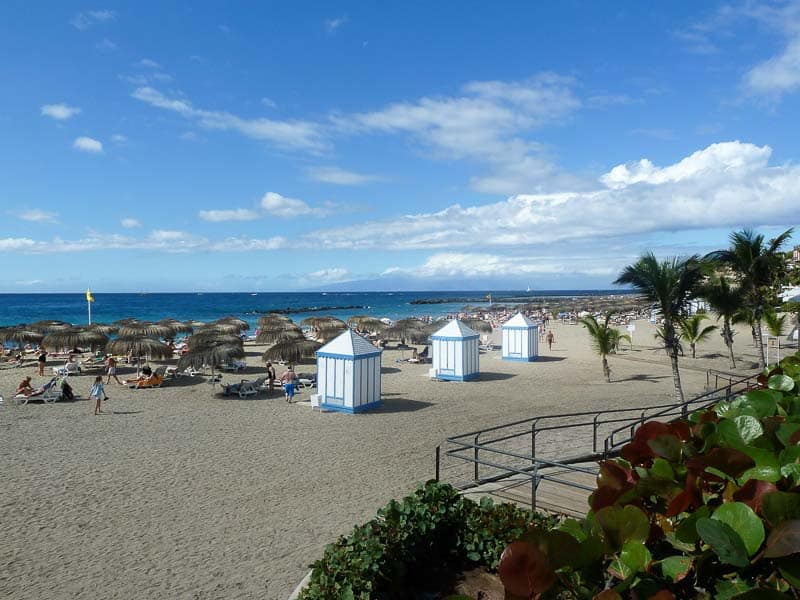 January is a good time for exploring the island because…

Tip: Bear in mind that in January Tenerife celebrates New Year’s Day and Three King’s Day on 06 January. Many restaurants and attractions will be closed on those dates so it may be wise to travel after the first week in January.

The best things to do in Tenerife in January

Tenerife’s landscapes are both diverse and stunning and we’ll start with Masca which has been named as the most beautiful village in the Canary Islands.

1. Take in the views in the mountain hamlet of Masca 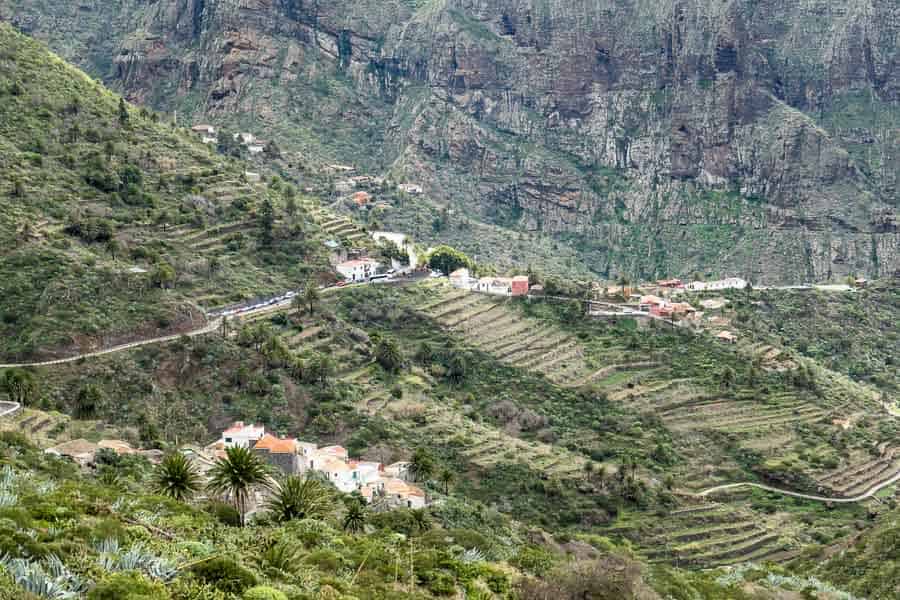 I don’t know which took my breath away more, Masca itself or the drive to get there.

The mountainous road to Masca, which ribbons through the gorgeous landscape, can be a little hairy at times but it’s worth every bend and switchback for the views waiting for you at the end.

The lookout point at Mirador la Cruz de Hilda has a café nearby with a large terrace overlooking the hamlet and the spectacular ravine. You’ll see farmers terraces built into the hillsides, rustic houses and palms punctuating the landscape. Stop for a coffee and just soak up those views. 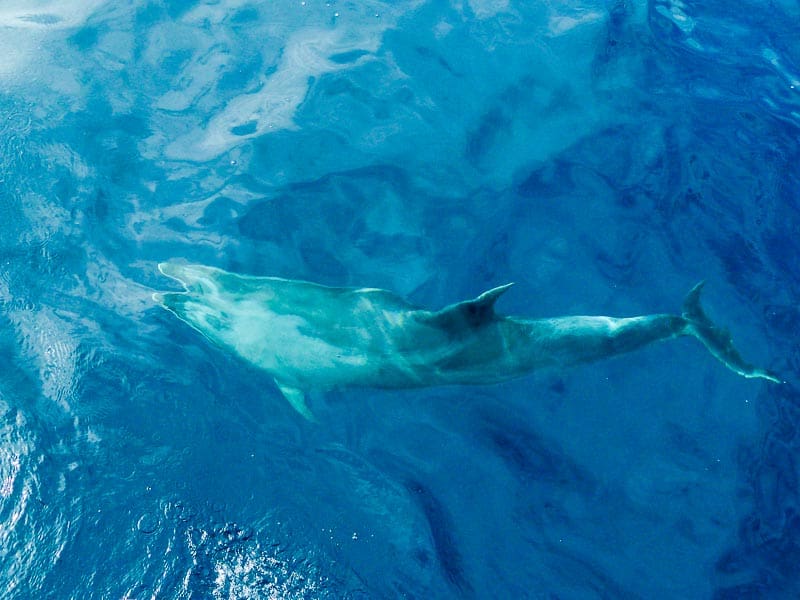 Tenerife is home to around 27 different species of whale and dolphin. The pilot whales don’t migrate so it’s likely you’ll spot them at any time during the year.

You’d have to be really unlucky not to spot pilot whales on a whale and dolphin watching tour. The savvy dolphins hang out around the fish farms so you’re pretty much guaranteed to see them too. If you’re lucky you might also spot one of the giant squid that swim the waters. 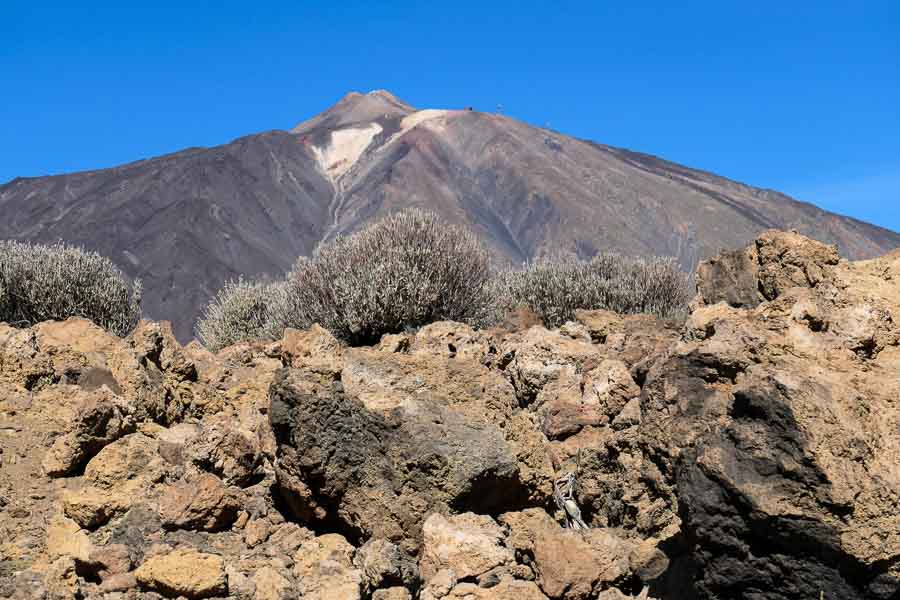 You’ll probably get your first glimpse of Mount Teide on your flight to the island. Teide is the Spain’s highest peak and her name translates to ‘white mountain’. If you visit Tenerife in January you’ll likely see the peak capped in snow. Teide is just one of over 300 volcanoes on Tenerife.

Drive through verdant pine forests and lava fields to reach Mount Teide. Park at the visitor centre near the base and wander through the rock formations and moonlike landscape.

Hike to the top of Teide or take the cable car and hike the final 200 metres of the Telesforo Bravo trail to the summit. You’ll need a special licence to do this. It’s advisable to book at least two months in advance because visitor numbers are restricted and it gets booked up early.

Apply on the Reserveas Parques Nacionels website. The permit is free of charge. If you can’t get a permit then you can book a guided tour like this one which includes the permit. See all guided tours here.

Tip: You’ll need to take a fleece or jacket as the higher elevation means it gets chilly. The air is very dry so take a flask of water to keep hydrated. 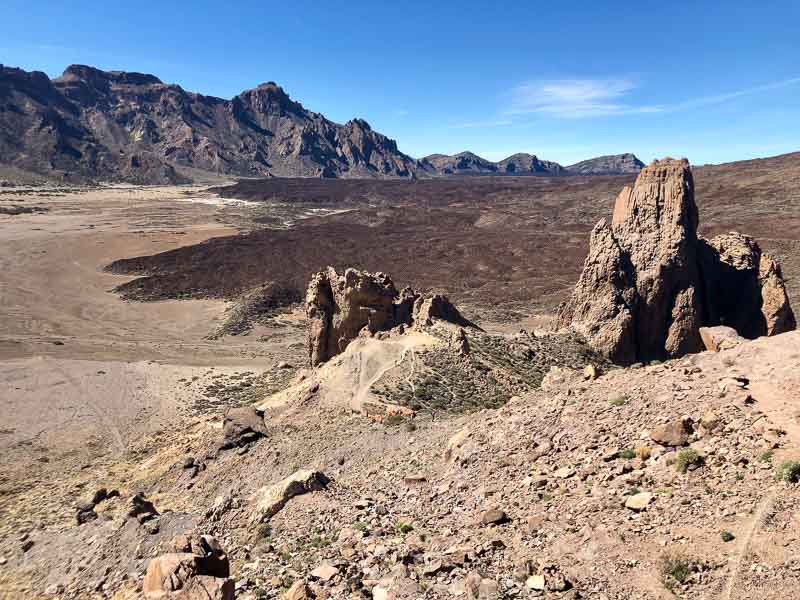 If you want to slow the pace then take an hour or two out to explore the Jardín de Aclimatación de la Orotava (Botanical Garden).This garden was established in the late 1700s as a stopping off point for plants being brought back from South America to the royal court in Madrid. Now it is home to a fascinating collection of sub-tropical plants and trees that you would ordinarily see under glass in a botanical garden in the UK.

Highlights include a 200 year old fig tree, several impressive Dragon trees and a giant cycad that waited 100 years to bear fruit. The gardens are recommended by Sally from sallyakins.com who visited Puerto de la Cruz, Tenerife’s capital, and wrote about Tenerife’s Botanical Gardens. 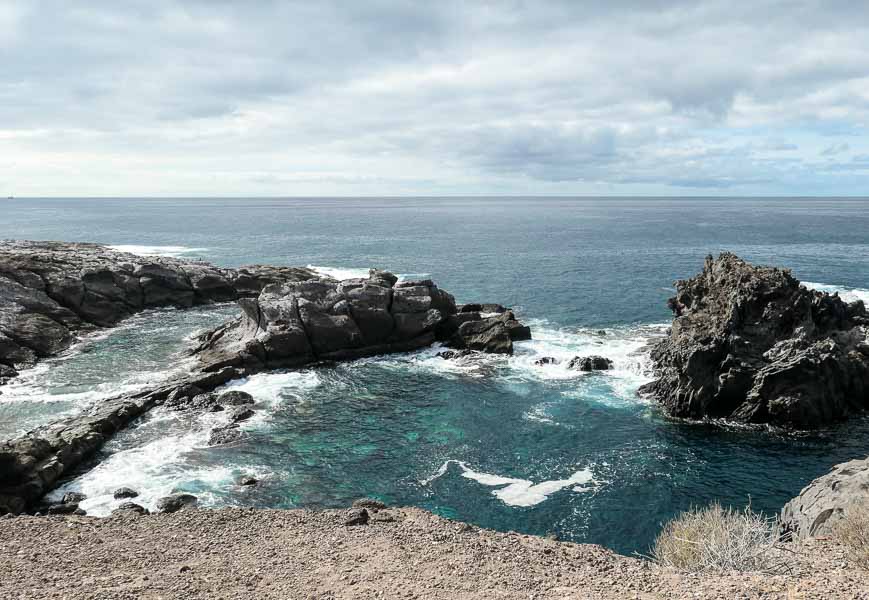 These cool pools and pretty coves were formed as the result of lava flows and eroded lava and are located at many spots around Tenerife’s coast. Enclosed by rocks and filled with clear seawater from the Atlantic they’re the perfect place for a dip.

Swimming in the Atlantic can be challenging so these sea pools strike a good balance. Some have steps, boardwalks and sun terraces added but others are completely as nature created them. Most of the natural pools are on the north coast of the island but there are a few others on the west coast.

You can visit several natural pools in Tenerife: 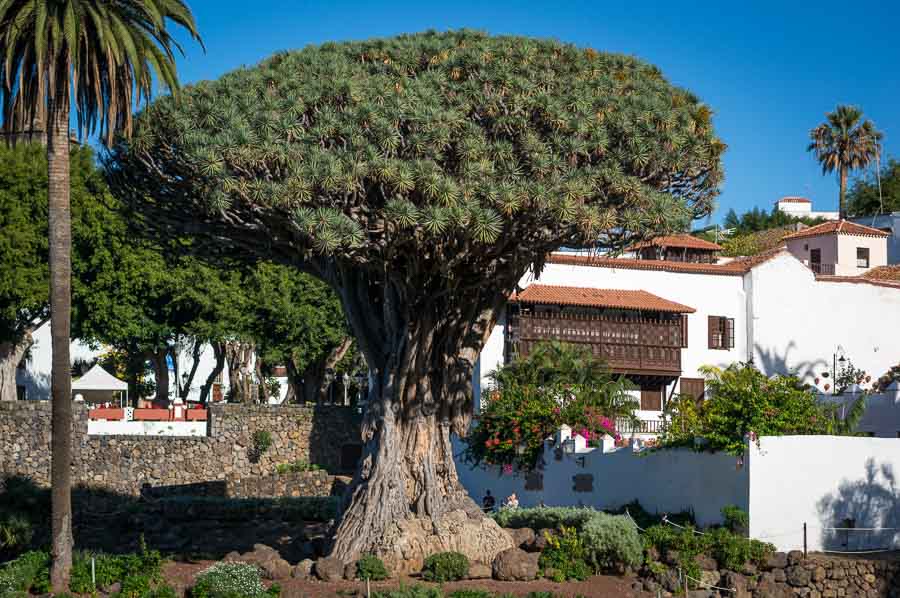 Drago Milenario or Dragon Tree is the national symbol of Tenerife so it’s only right and proper that we include it on our list. The tree’s resin which is red, like ‘dragon’s blood’, is reputed to have medicinal properties.

Believed to be over 1000 years old the tree extends 22 metres upwards and has a diameter of ten metres. It is duly celebrated by the local community and stands resplendent in the Parque del Drago gardens just outside Icod de los Vinos which you can visit for a small fee. Or, for a free viewpoint, you could stand in the square next to the Church of San Marco. 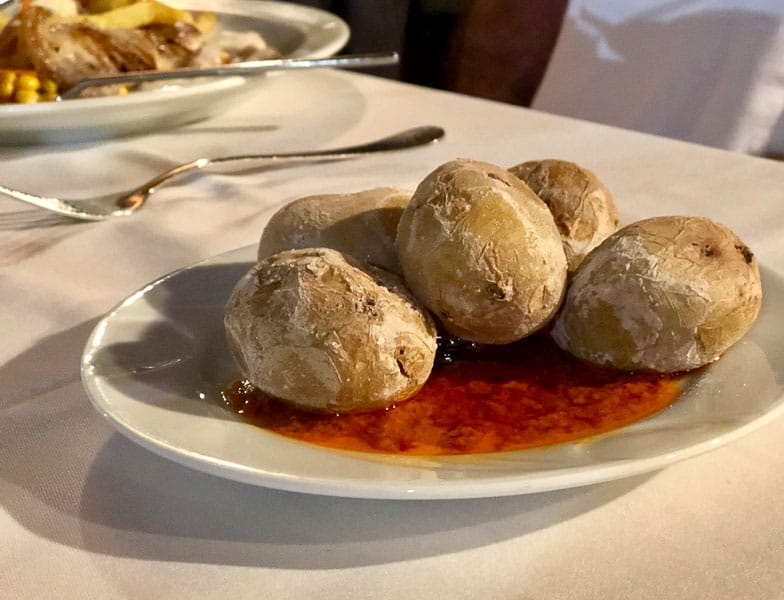 You can’t go to Tenerife and not eat papas arrugadas. These small, wrinkly potatoes have a delicious nutty flavour and a light crusting of salt. I adore them and they’re one of the first dishes I order when I arrive back on the island.

Many of the varieties have been grown in the Canaries since 1600s when they were brought back from the Americas by the conquistadores.

Papas Arrugada are usually served with mojo sauce which is made from peppers, olive oil and garlic. There are two types of mojo – verde (green) and rojo (red). The latter is slightly hotter but neither are particularly spicy and both are rather fabulous. 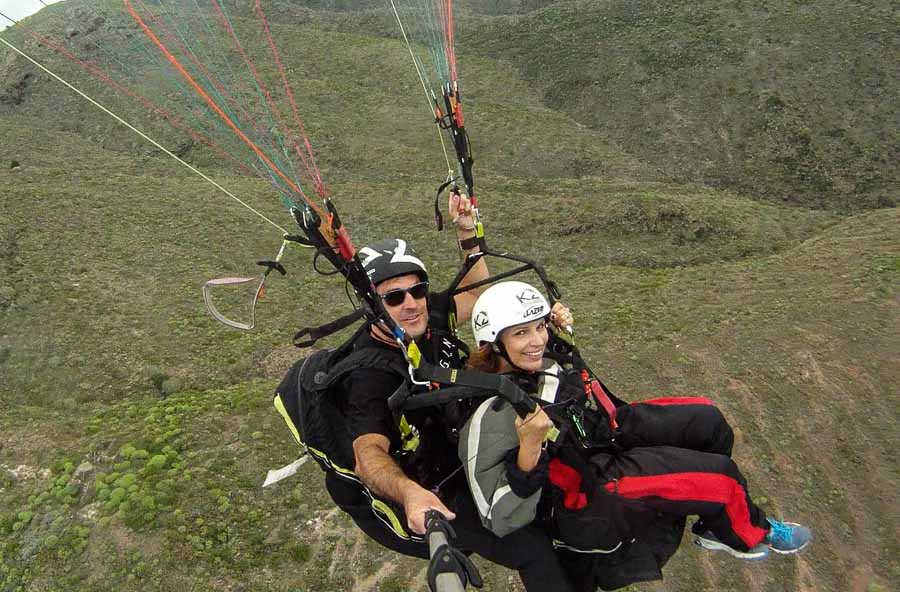 I’ll never know how I got talked into doing this but I’m glad I went through with it. I did a tandem paraglide from the hillside near Costa Adeje and it was a fabulous experience – such a buzz. The views as we peacefully floated through the skies were incredible and I got a round of applause as we landed on the beach. I felt completely safe and would love to do this again some time. 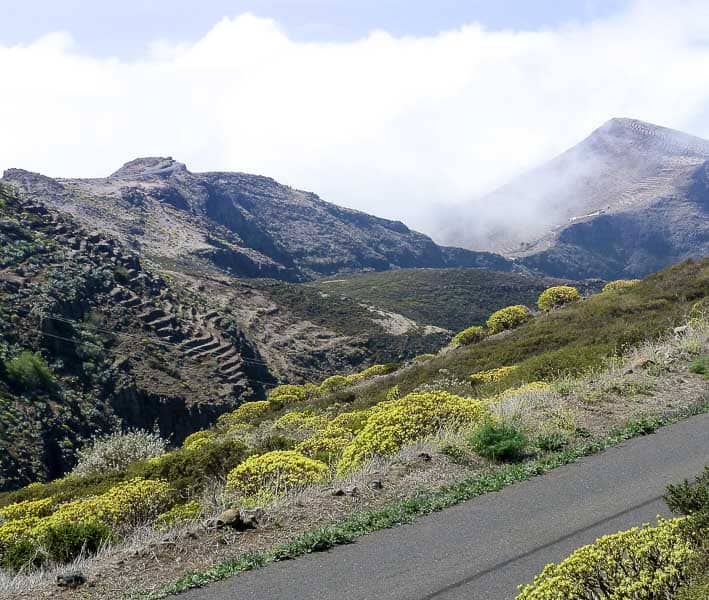 See incredible views of Mount Teide and Tenerife from La Gomera. A tour from Tenerife by ferry to La Gomera takes in some of the islands unique sights and culture. Start at Torre del Conde in the island’s capital of San Sebastian before heading inland.

The mysterious Garajonay National Park, a UNESCO World Heritage Site, sits in the centre of the island. The area is covered in dense woodland and is almost always shrouded in mist. The cloud forest trees are laden with moss and the ground covered with ferns giving the forest an eerie feel.

The island is a magnet for hikers with stunning scenery and many walking trails. 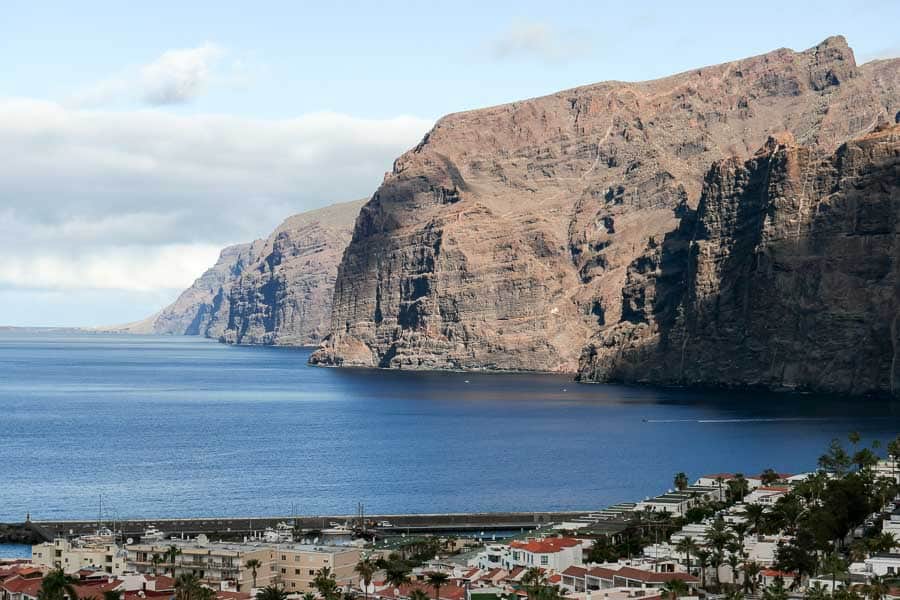 Los Gigantes is a resort town on the west coast of Tenerife in Santiago del Teide. Acantilados de los Gigantes means ‘Cliffs of the Giants’ and these impressive cliffs rising vertically out of the Atlantic ocean are a spectacular sight.

Rising to a height of 500-800 metres the seven million year old Teno Mountains dominate the landscape and they’re breathtaking. Stop at the Mirador Archipenque on the road into town for some epic views or take a boat ride to see them up close in all their magnificence. 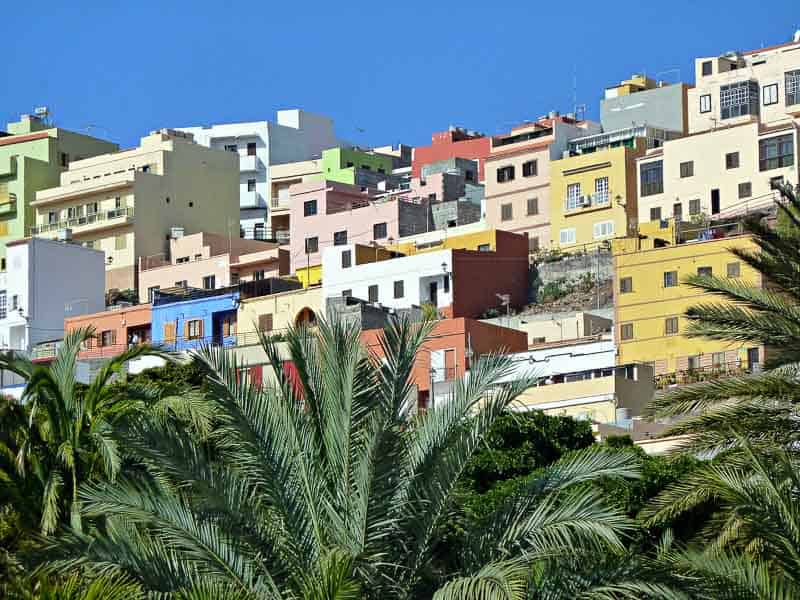 As you can see there’s a lot to keep you busy in Tenerife and we haven’t even touched on the beaches or the dozens of other things to do in Tenerife. I hope you’ve found this guide helpful if you’re planning to visit Tenerife in January. It really is a good month to go if you’re looking for a warm winter break.

Any questions? Drop me a comment below or get in touch via email. 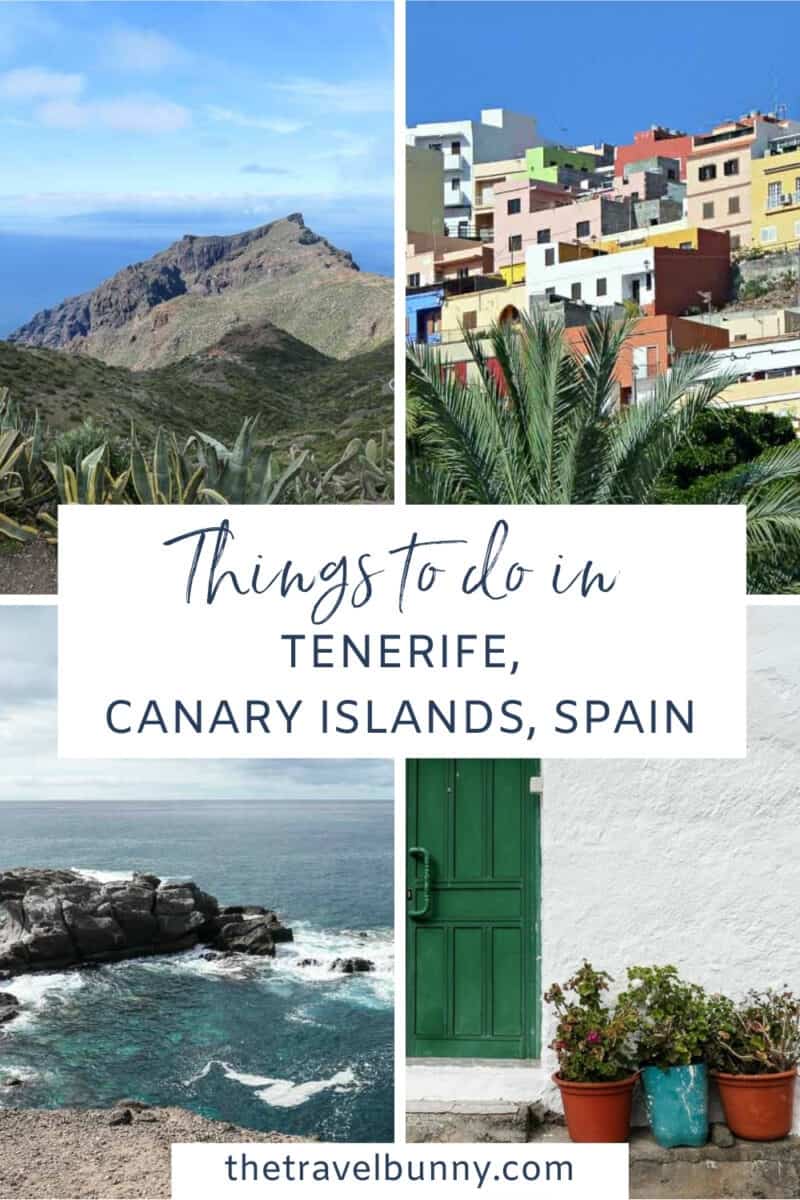