Street art pops out from the walls of the Barranco district and it’s a big giveaway that you’ve arrived in the city’s artsy neighbourhood.  Bohemian Barranco is home to many of Lima’s artists, photographers and musicians. MATE, the gallery of the Peruvian fashion and portrait photographer Mario Testino, resides in this artistic neighbourhood. Museo de Arte Contemporáneo de Lima (MAC), the Contemporary Art Museum, which specialises in modern and contemporary Peruvian art is also in Barranco. But it was the colourful street art that captured my imagination. 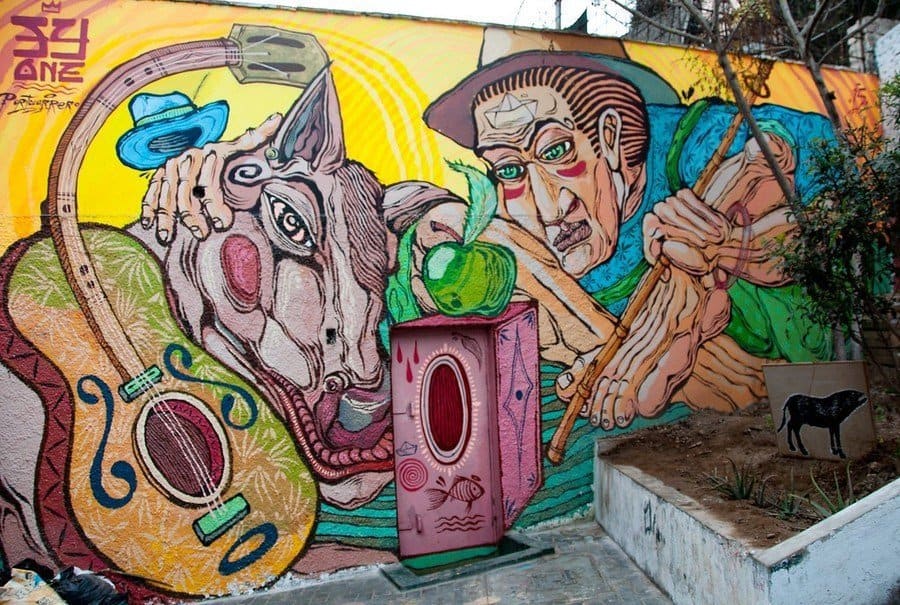 Limeno Yandy Graffer (real name Abraham Portocarrero) is the street artist behind this mural. The flowing swirls, vibrant colours and black outlines makes this one of my favourite walls. Graffer paints murals with themes of the sea and fishermen because they reflect the city’s culture and trades. 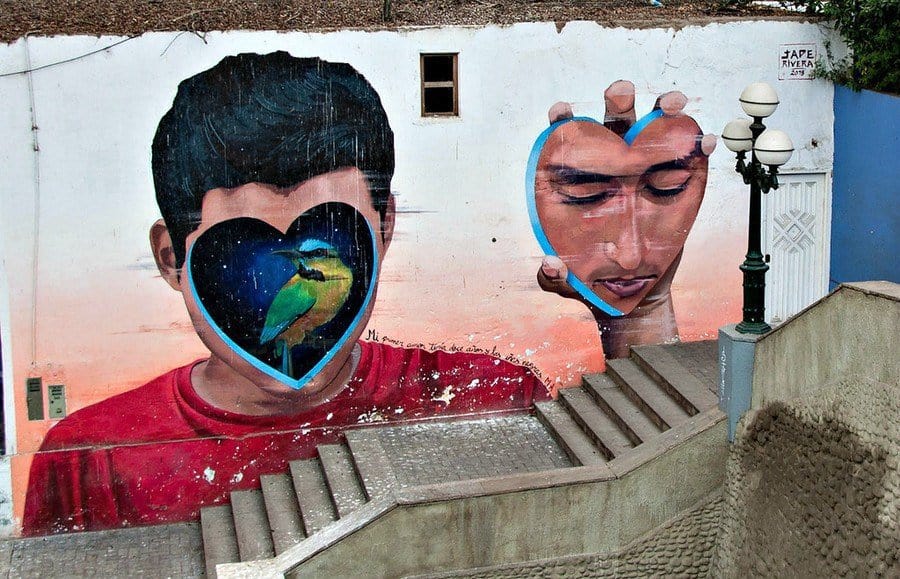 “The Home Of Sigh” (above) by Jade Rivera is by the Bridge Of Sighs, one of the main sights in the Barranco. The mural symbolises the love in the neighbourhood. 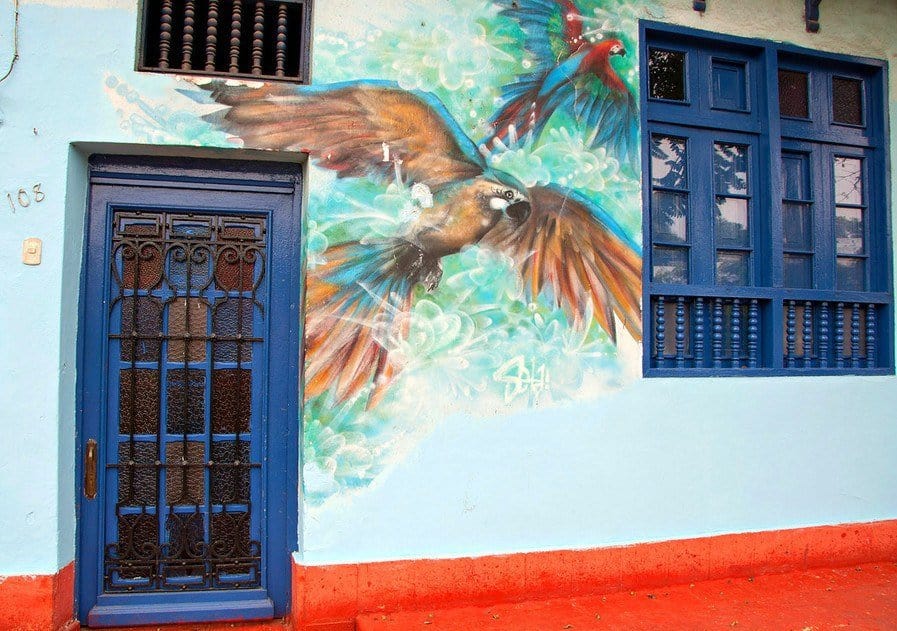 Festival “Muraliza el barrio” is a project started by a group of Lima street artists called the Barranquinos Artists Network. In 2015 the new mayor of Lima, Castañeda Lossio, ordered Lima’s street art be painted over in bright yellow paint. Yellow just happened to be his political party colour. Sixty murals were destroyed and so Lima’s outraged artist community decided to act. A collective was formed to replace Lima’s lost street art and festival “muraliza el barrio” was born. #BorraronUnoPintaremosMil – “they erased one, we will paint a thousand”. 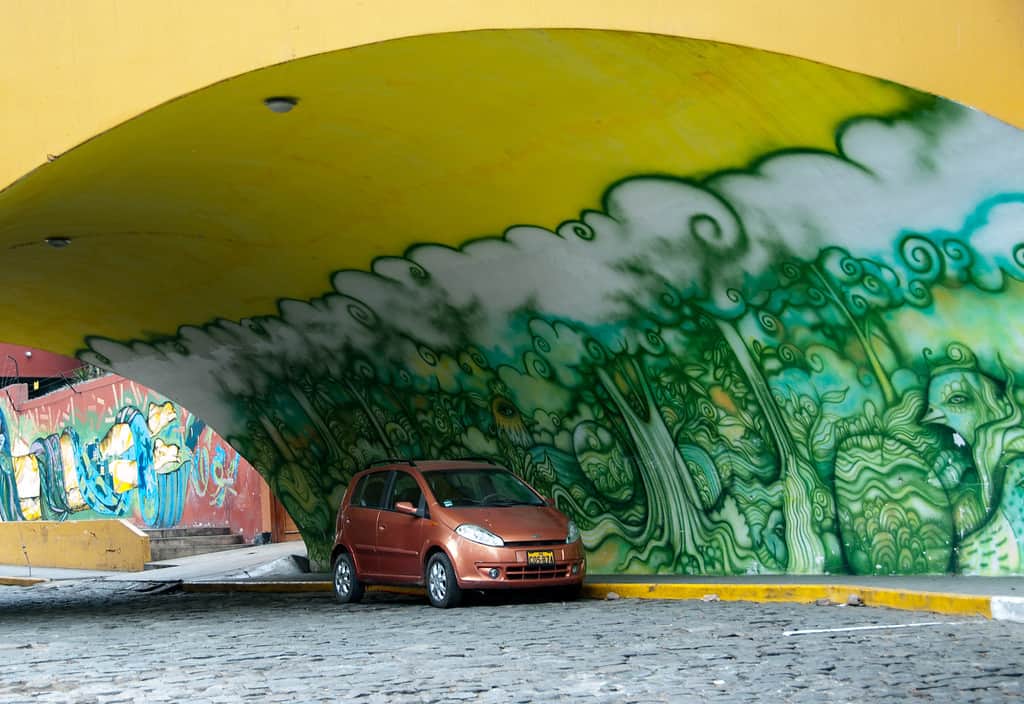 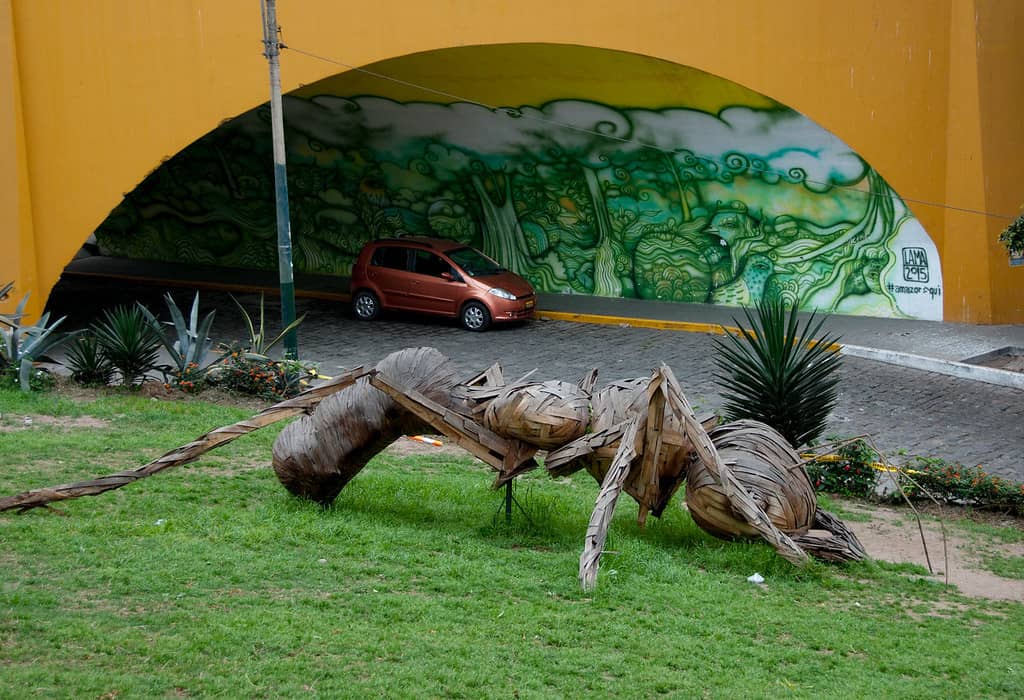 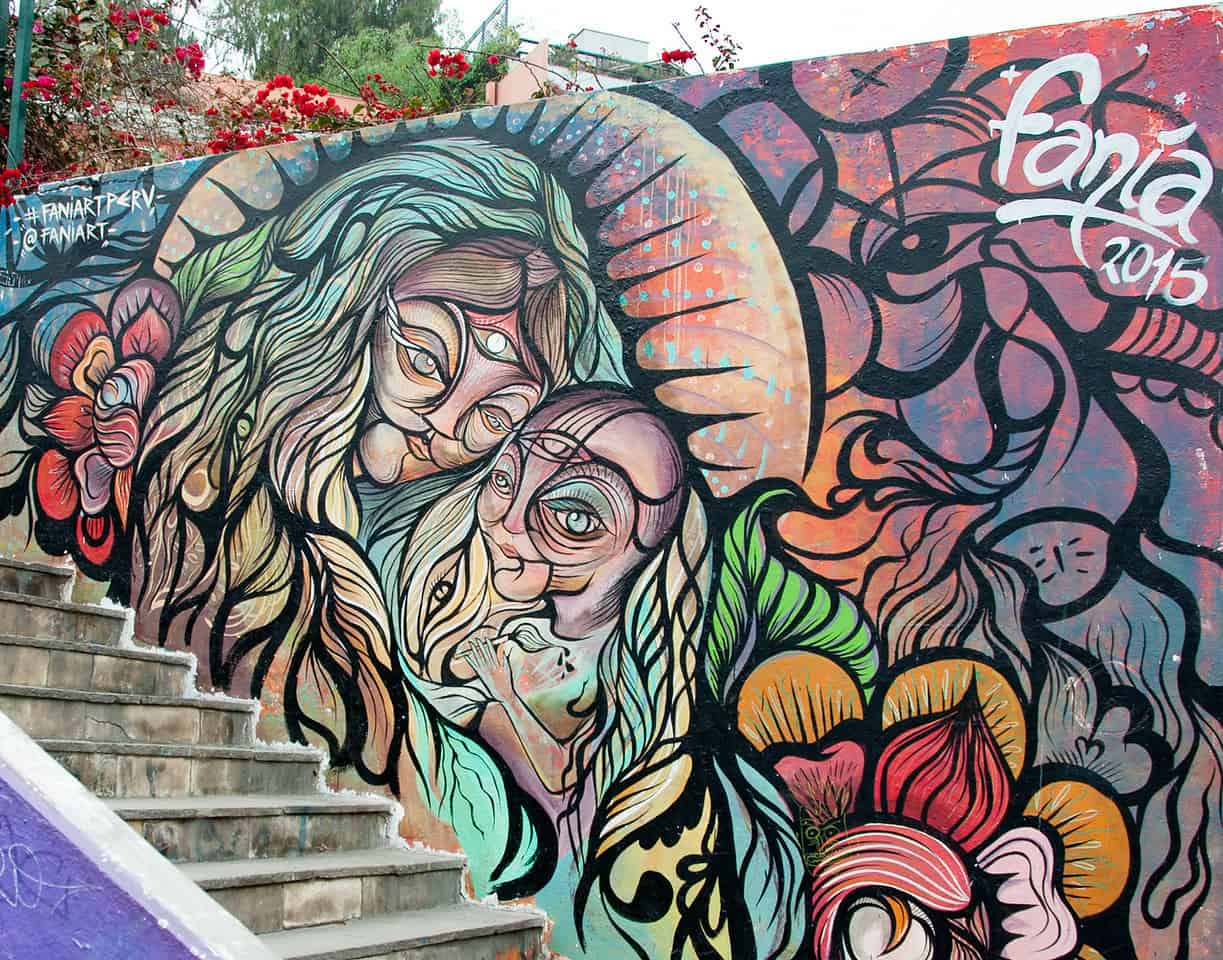 More Lima inspiration – Things you should know about Lima 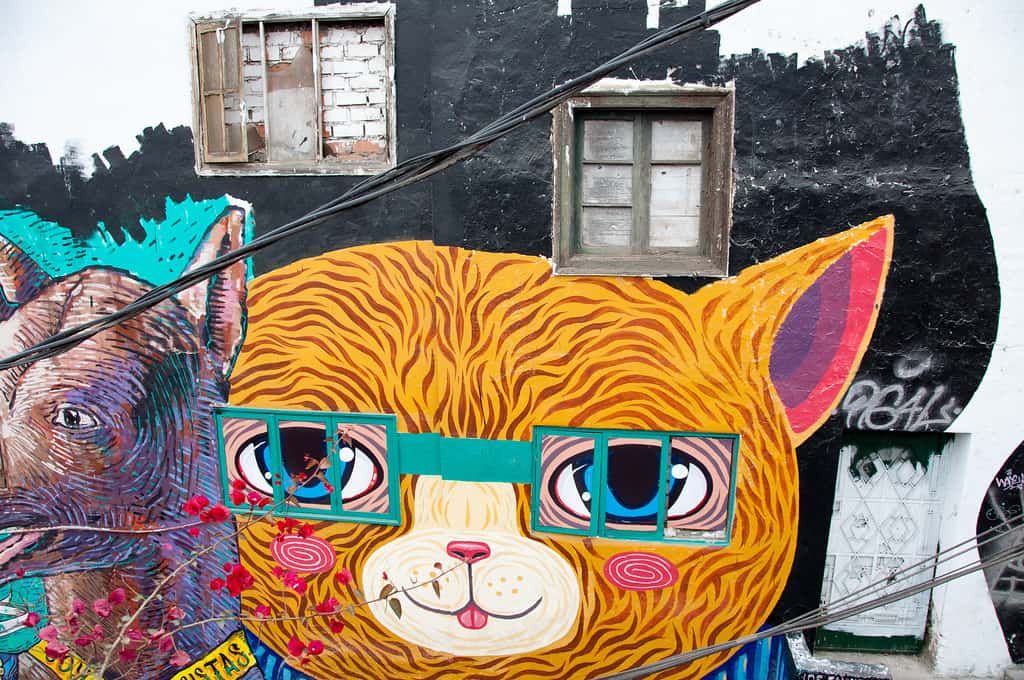 The breed of dog in this mural is a Peruvian dog. It’s a hairless breed except for a few facial whiskers and an odd tuft of hair on top of the head. 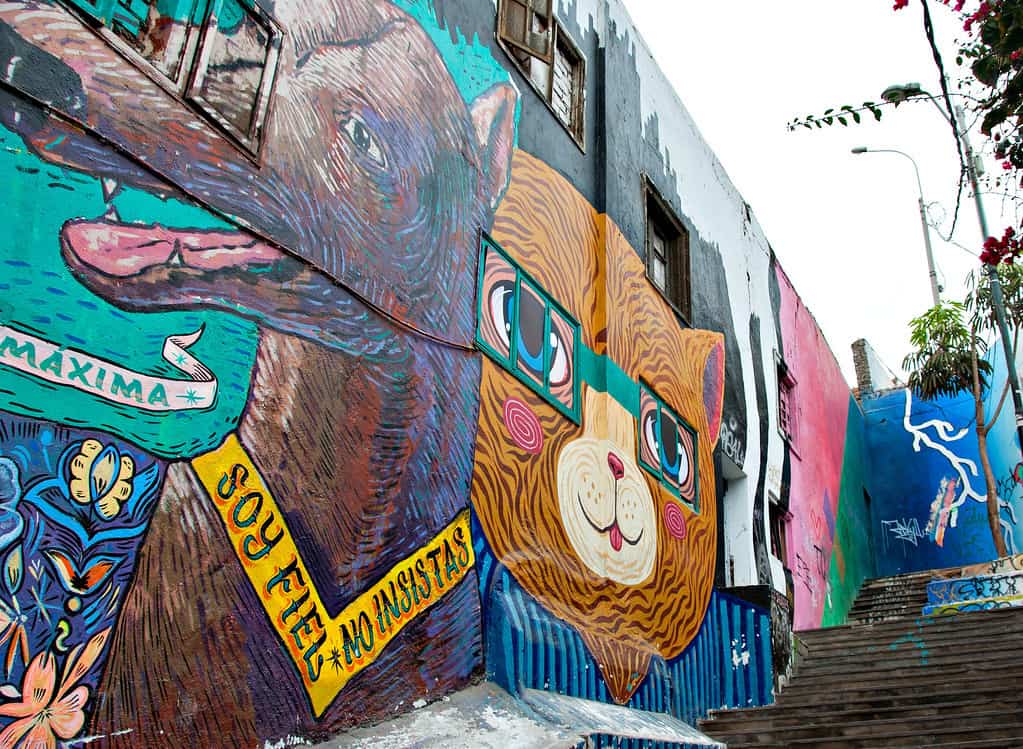 Barranco is Spanish for ravine which aptly describes the cliff-top area with walkway cut through the rock to the sea. Bajada de los Baños pathway leads down towards the main coast road and beach which runs between Miraflores and Chorrillos. You’ll find a lot of murals in this area.

Read More: Peru on a Plate – what to eat and drink in Peru 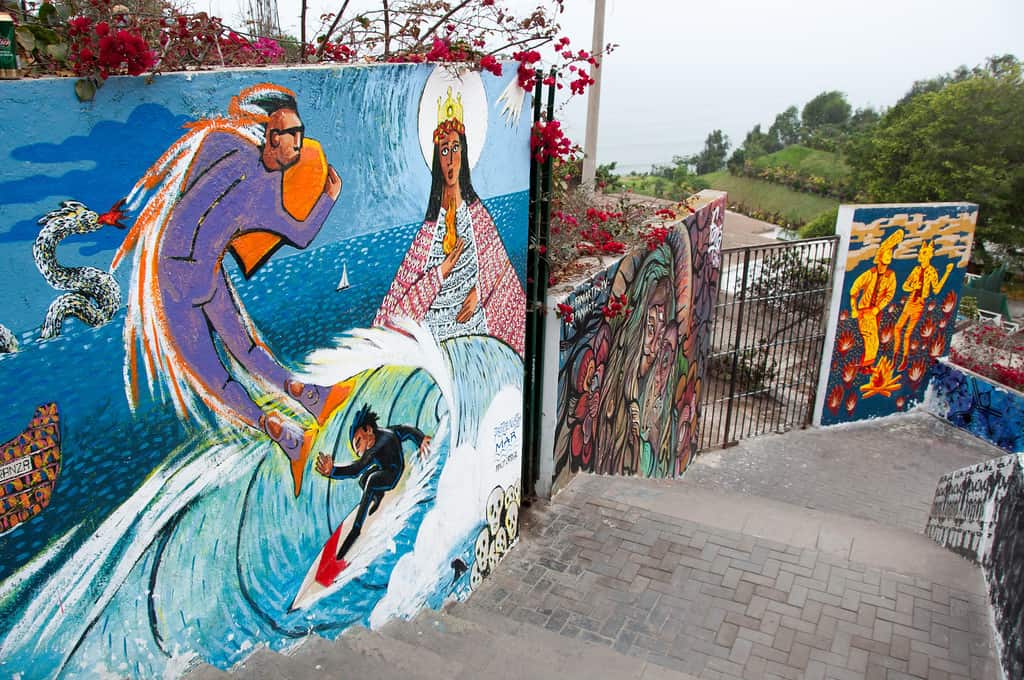 The famous Peruvian artist Victor Delfin lives in Barranco, Lima.  We stayed at the house where he has his studio. Second Home B&B is packed with Delfin’s works and I felt the mural from the breakfast room deserves a spot in this post! It’s not street art but it’s a pretty cool wall. 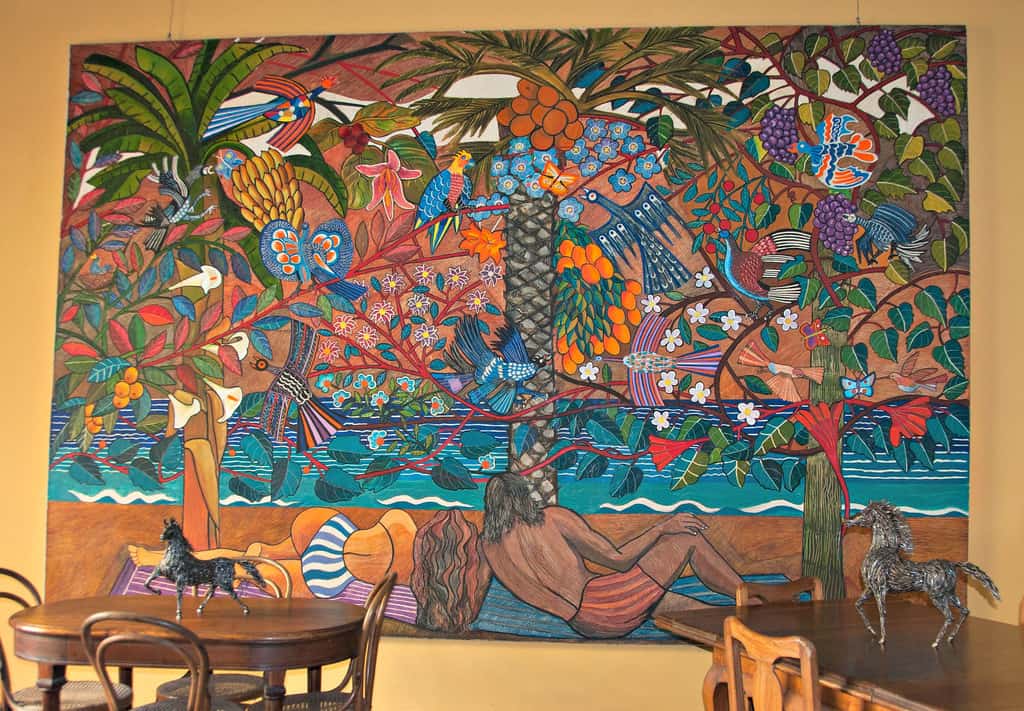 Some of this street art we saw during our Lima tour with Da Taste of Peru and more when exploring the Barranco later on. There’s a Facebook page which showcases more Lima street art. What’s your favourite city for street art? 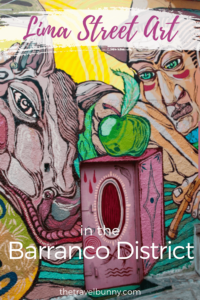 can you provide the specific location (address). we are visiting Peru next month and your blog is my bible.

The Barranco is a small district - if you head for the bridge you'll see some street art after that just ask a local because it's dotted around the area. There are street art tours which you can take which cover other parts of Lima. Check Tailored Tours for details. Have a fantastic trip!

There's a lot of avant-garde stuff and psychedelia in this selection - love the 'House of Sighs'. As you said, many folk don't stop in Lima, and I was one of them - but only because of logisitics. I'll be sure to check out the street art next time (and there WILL be a next time!!).

This was just one small area of street art in the Barranco. I hear there's a lot more around the city and even a street art tour you can take. Hope it's not too long before your next visit :)

I absolutely have a thing for street art and murals, so this is totally up my alley! I love shooting photos with beautiful wall art in the background, so I will definitely save this for when I visit Lima!

Hope you don't have to wait too long before you get to Lima. Check out the street art in the Barranco and also the rest of the city, there's lots of it.

I wouldn't really think of street art and Lima but they have some beauties, so intricate, there are some real talent there and a tour's a great way to uncover it.

It was great to see the street art - some was on the tour and others we found ourselves :)