In Rodrigues island, Mauritius food is fresh, local and authentic. The island is rich, verdant and green and nestles within a lagoon coloured every shade of turquoise.

The people of Rodrigues work hard to cultivate their food. They fish the lagoon, rear their own livestock and work the land.

Recipes are cherished and passed down through the generations. Through the island’s food we met its people, learned its history and celebrated their traditions. It wasn’t long before we discovered that food in Rodrigues is so much more than just eating. 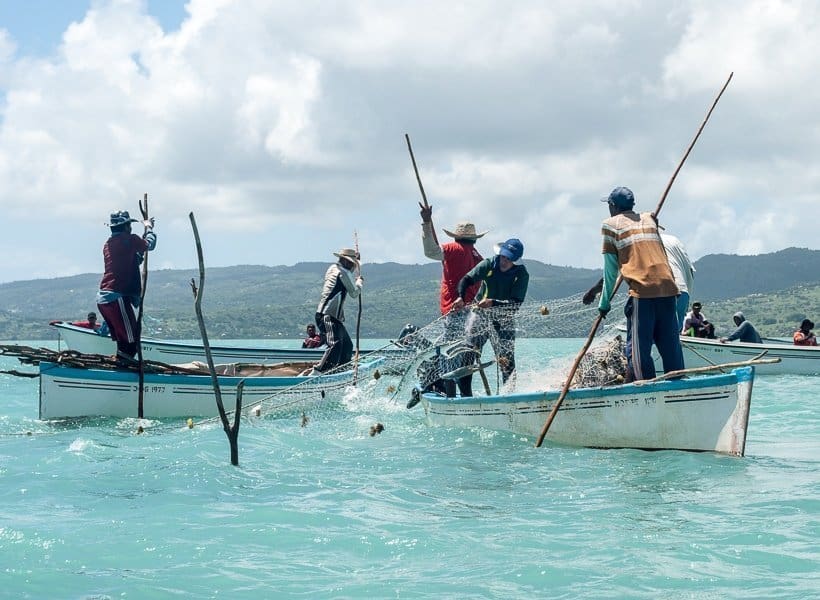 For a small island Rodrigues has a diverse food culture with Créole, African, European, Indian and Chinese influences reflecting the varying cultures of the population. Add to this the island’s home-grown ingredients and huge selection of seafood and you have a unique, healthy, and incredibly tasty, cuisine. Here’s what Rodrigues brings to the table.

A visit to the food market at Port Mathurin gave me an insight into Rodrigues food culture. Rows of colourful stalls sell pineapples, mango, dragon fruit and bananas amongst other fruit. Vegetables and fresh herbs are plentiful.

Jars of local honey and home-made spicy pickle are lined up in neat rows. There’s street food; deep-fried samosas and onion rings – an Indian influence. Meat ranges from chicken to pork, beef and goat. Dried fish and octopus can be bought or a short walk towards the harbour will find fishermen selling their catch of the day. 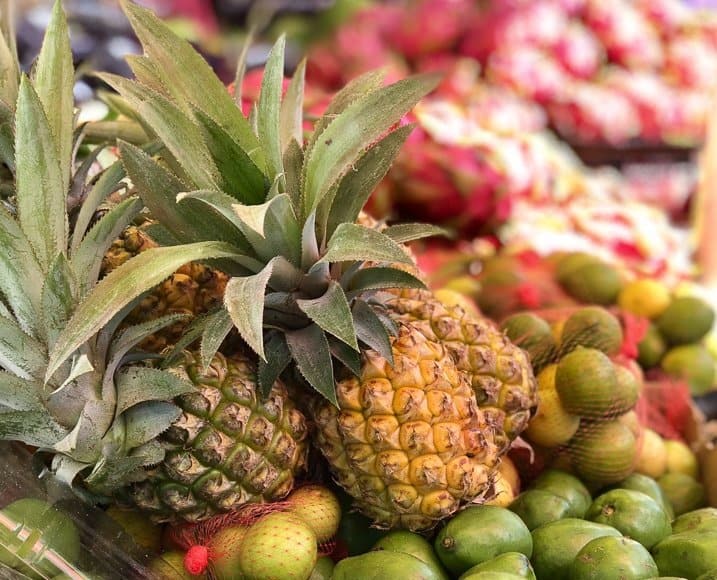 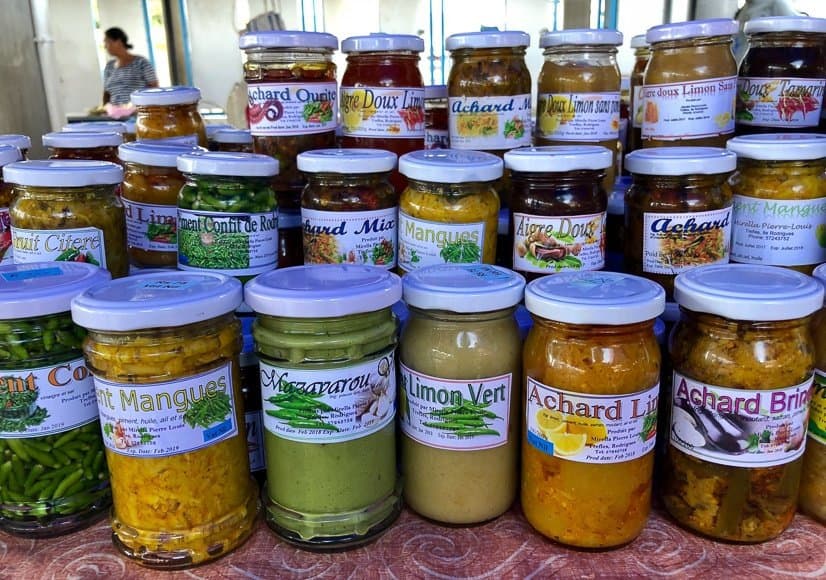 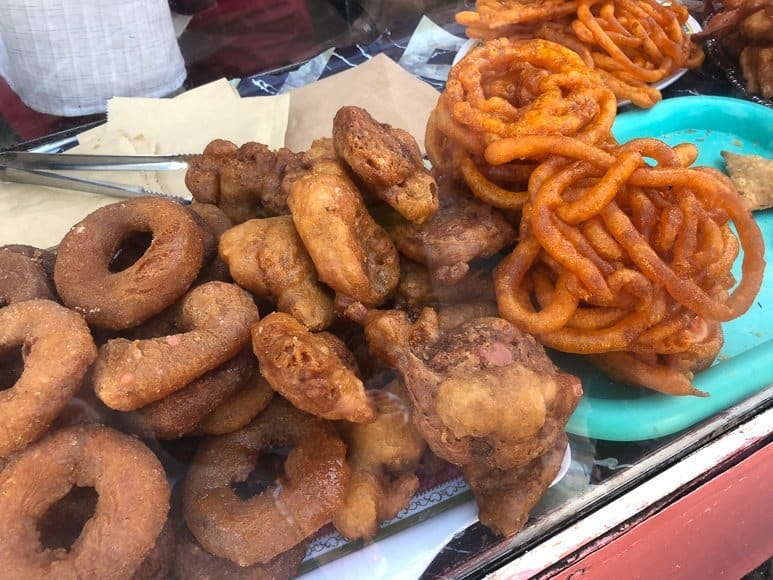 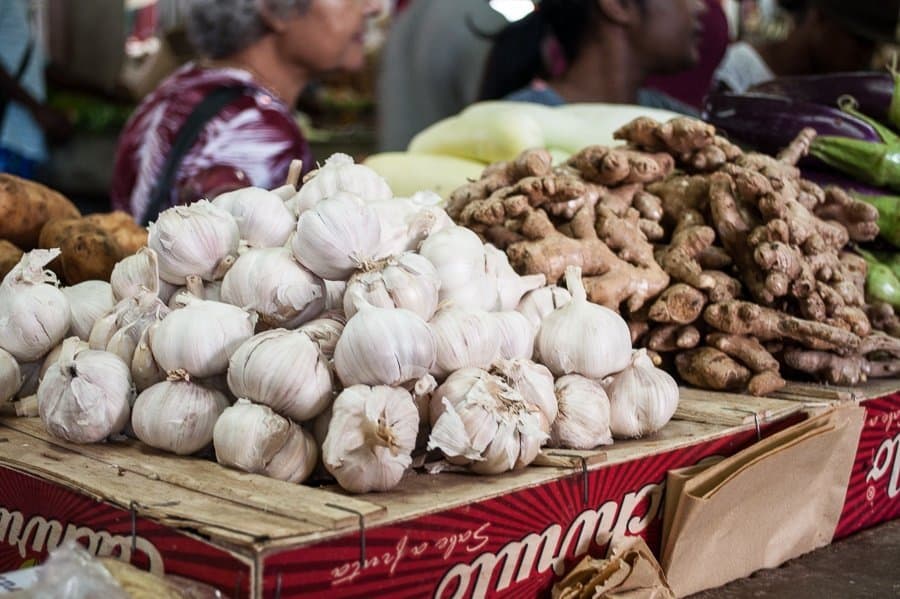 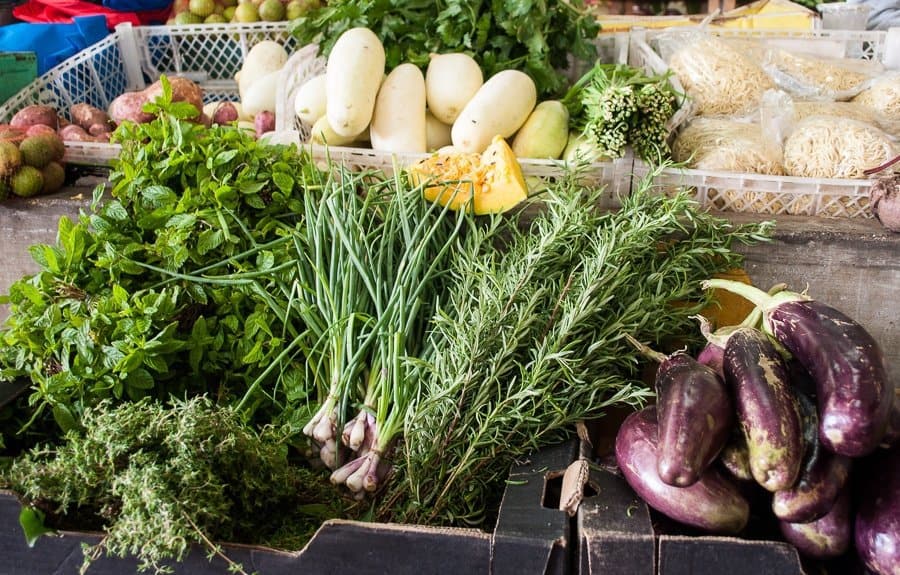 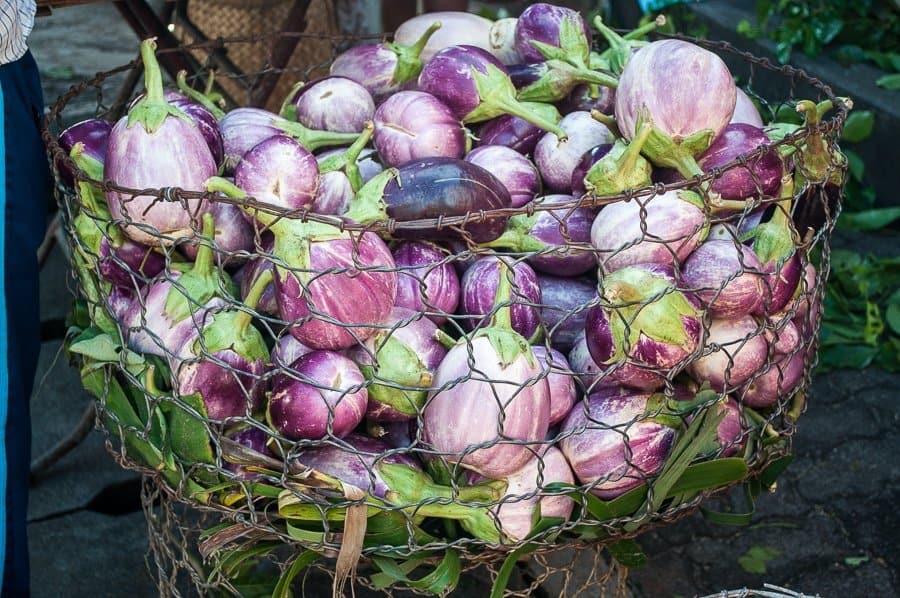 Read more: Best Things to do in Rodrigues Island

Créole food forms an important part of traditional Rodrigues cooking and my first taste of it was soon after I arrived at my guest house, La Belle Rodrigaise. Francoise Baptiste runs the guesthouse with her husband and is well-known on the island for her excellent cuisine.

Rodrigues has an abundance of fresh prawns and octopus and I was served both for my first lunch. Deliciously spicy prawns were followed by octopus Rougaille eaten with a view of the lagoon at Graviers Beach.

Rougaille is a popular Creole dish. A rich tomato stew with onion garlic and thyme makes up the base and meat, fish or octopus is added. I had a few variations during my time on the island. 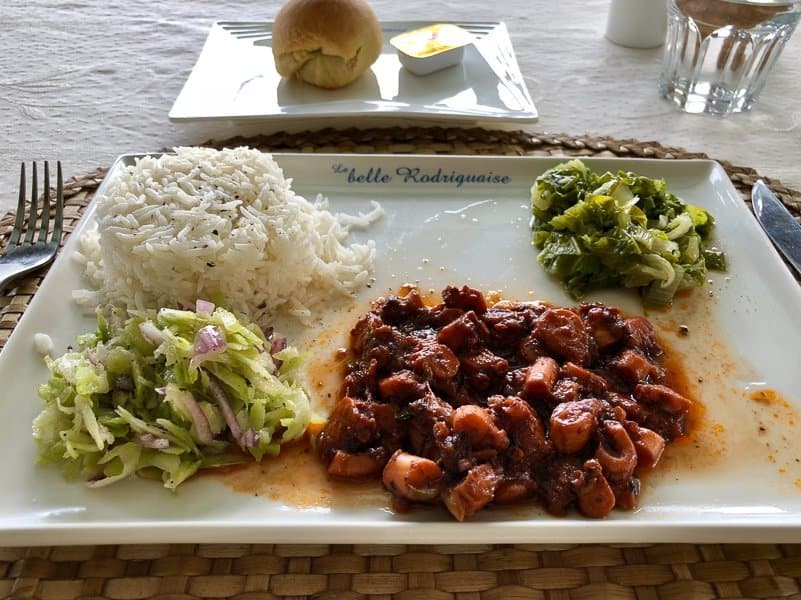 Rougaille is one of the island’s national dishes along with Pain d’Epices (see desserts) and sausages with kreolinės which you can see hanging in the sun. Whether this is to dry them or cook them I’m not sure – if anyone knows let me know! 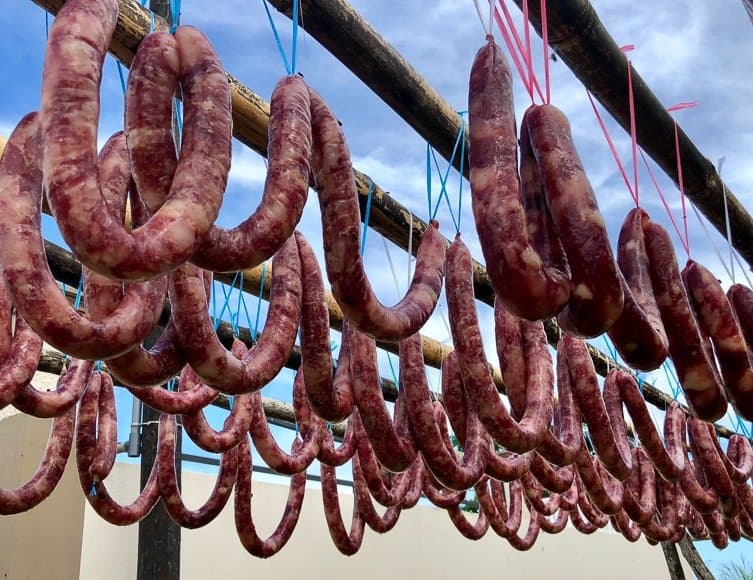 Fish and Seafood in Rodrigues

Bekin fish, Wahoo and Mulet are all fished in Rodrigues along with crab, prawns and octopus. My favourite and most memorable breakfast was at about 8.30 a.m. on a boat in the middle of the lagoon after a very early start.

It was the day of the Fete du Poisson and we’d gone out in a small boat to watch the flotilla of fishermen make the first catch of the net fishing season. They were keen to fish after a six month break. There was excitement and an air of anticipation as the fishermen staked their nets in a crescent shape and dramatically drummed the fish into the nets. 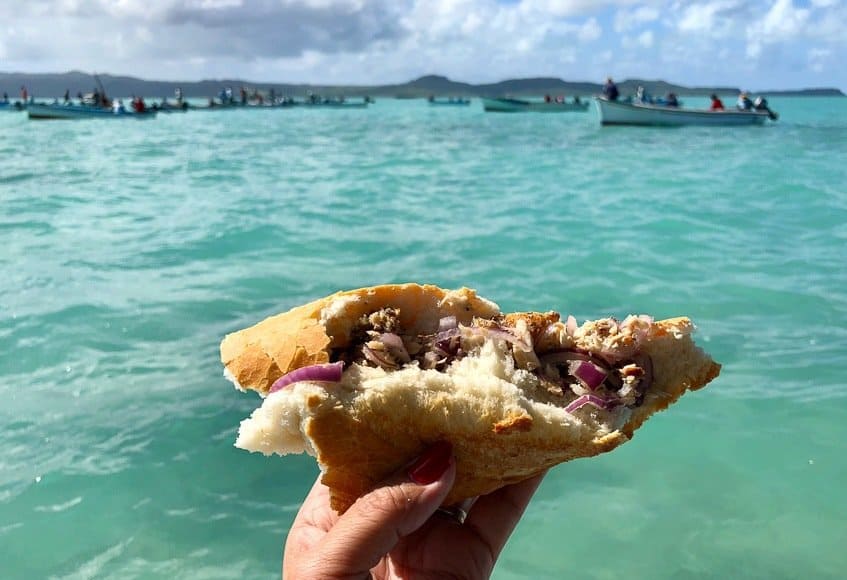 After the first catch we stopped for breakfast; a baguette stuffed with flaked Bekin fish, chopped tomato and red onion, salt and lemon juice. It was divine. We followed this with home-made peanut brittle. A very simple, but delicious, breakfast on a boat in the Indian Ocean – one I’ll remember always.

After the fishing we joined in the Fete du Poisson on the beach with hundreds of islanders. We ate fish from the first catch with rice, pickles and curry sauce and watched as the fresh fish was handed out to people in the co-operative. Music and dancing followed. 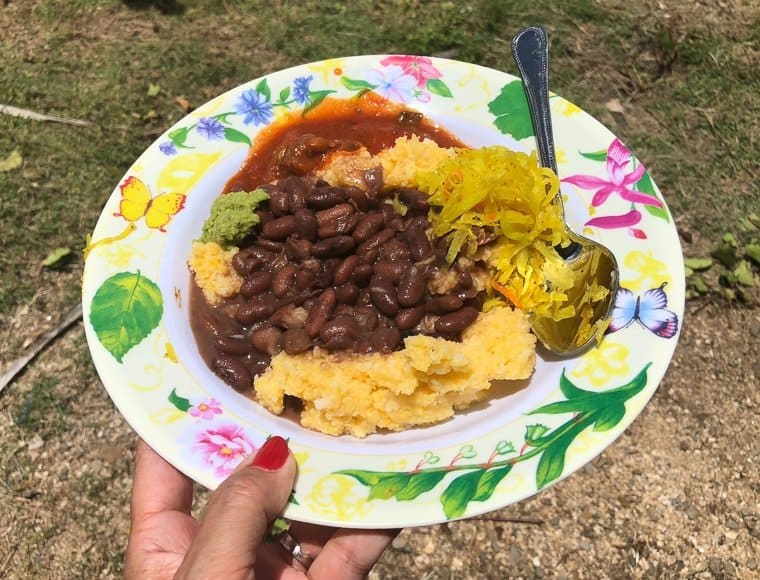 An authentic way to enjoy Créole food is at a table d’hote loosely translated as hosts table and should be on your list of foodie experiences when you visit the island. Table d’hote is where you’ll enjoy a home-cooked meal in someone’s home.

The family at La Grand Lagon has a dining area on their veranda and whilst there I sneaked into the family kitchen to watch our meal of Wahoo fish being prepared. I don’t speak French Creole and our hosts didn’t speak English but we got by and it was a lovely insight into how Rodriguans live.

Interestingly the fish meal was prepared by the man of the household. First came deep-fried fish pieces with a squeeze of lemon a small dish of chilli sauce. This was followed by fish caught that morning, beautifully presented and served with rice and a rich creole sauce, tapioca and potatoes. 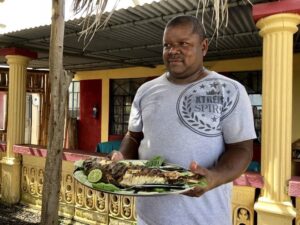 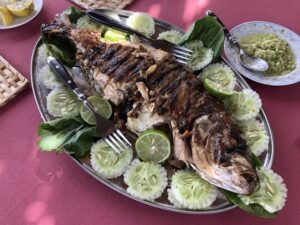 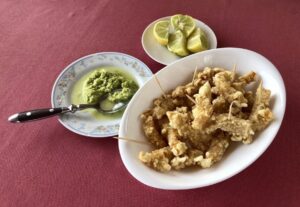 We also had a wonderful table d’hote meal at Villa Mon Trésor, a B&B in Anse aux Anglais near Port Mathurin. It was prepared by the owner Marie Louise Roussety who gets up at 4 a.m to be first at the food market to get the pick of the produce. It showed – the meal we had was excellent. 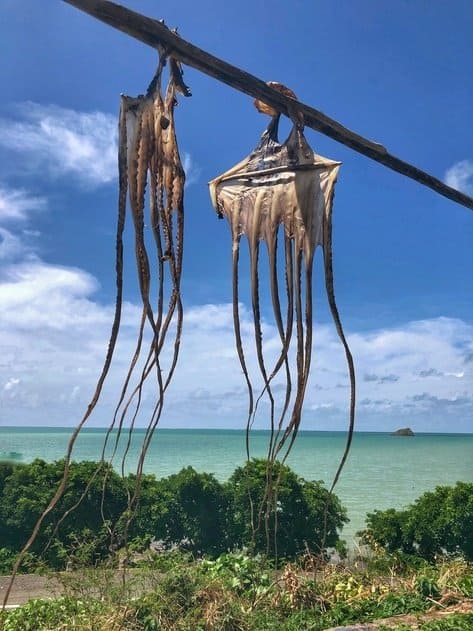 During the season you’ll see the odd sight of octopus dangling from wooden poles as they dry in the sunshine. Octopus cyanea is hunted in the lagoon, often by women, who wade through the shallow waters with metal poles searching out the octopus from their hiding places in the rocks.

Fishermen go out in boats into deeper water and hunt with spears. The octopus season was devised to help preserve the species. Dried octopus is soaked and used out of season but has a pungent flavour.

One of my favourite dishes was the octopus salad (ourites) which I enjoyed at Le Pandanus. It’s a simple recipe of fresh chopped octopus, tomatoes, peppers, onions, lemon juice and seasoned with salt and pepper. Delicious. 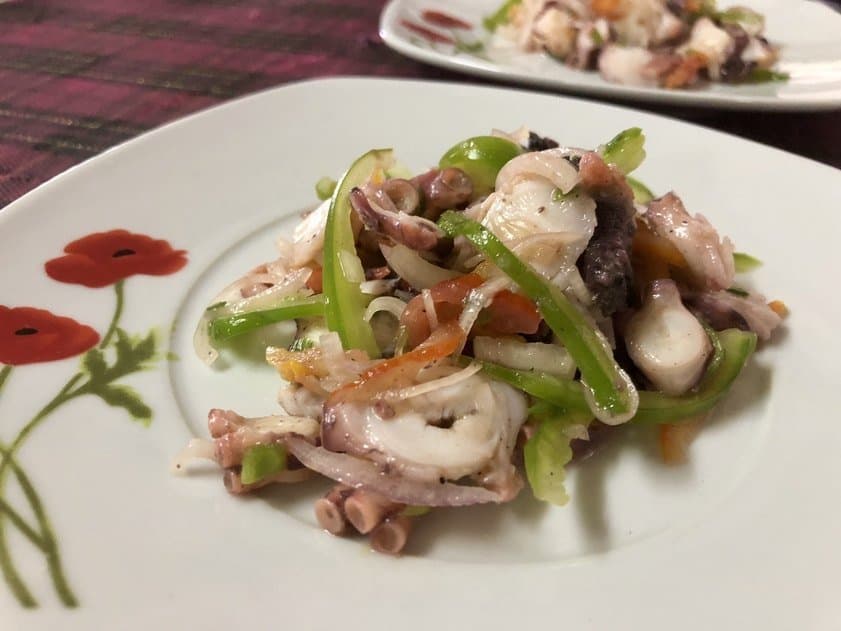 With India and Sri Lanka nearby the food of the Mascarene islands are bound to have an Indian influence and this was evident in the curries we ate. Le Marlin Bleu in Anse aux Anglais is a popular restaurant where I had a delicious beef in a spicy sambal sauce.

The restaurant also serves a range of seafood and fish in their relaxed setting.  Le Pandanus also served up a great pork curry. For more restaurants on Rodrigues click here. 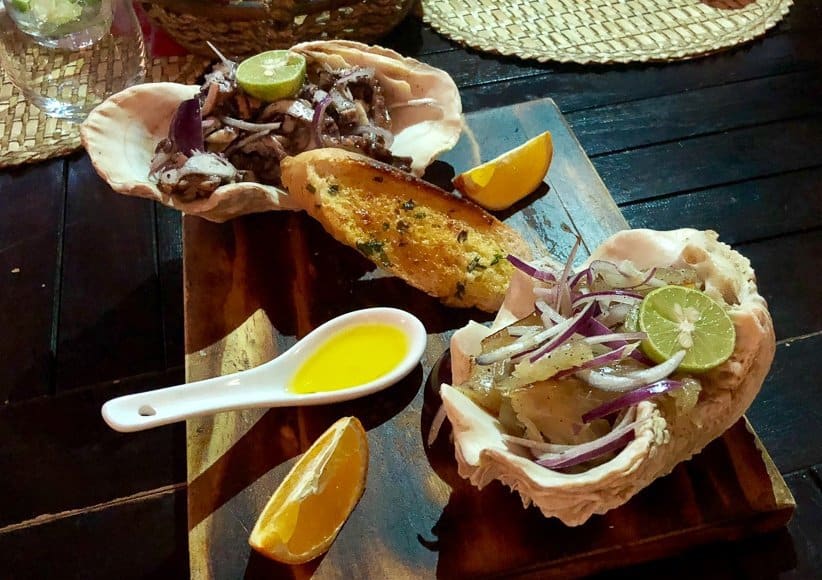 Chilli sauce is served with everything. You’ll only overdo this innocent looking sauce once – it packs quite a punch! Chutneys made with mango, tamarind, star fruit and other fruits add a sweetness to dishes whilst vegetable pickles with mustard pickle add a piquancy to food.

Rice accompanies most food with a range of vegetables or a fresh papaya salad. Papaya and carrot is grated and the water squeezed out. Red onion, oil, lemon juice, vinegar and seasoning are all mixed in to make a refreshing, crunchy salad. 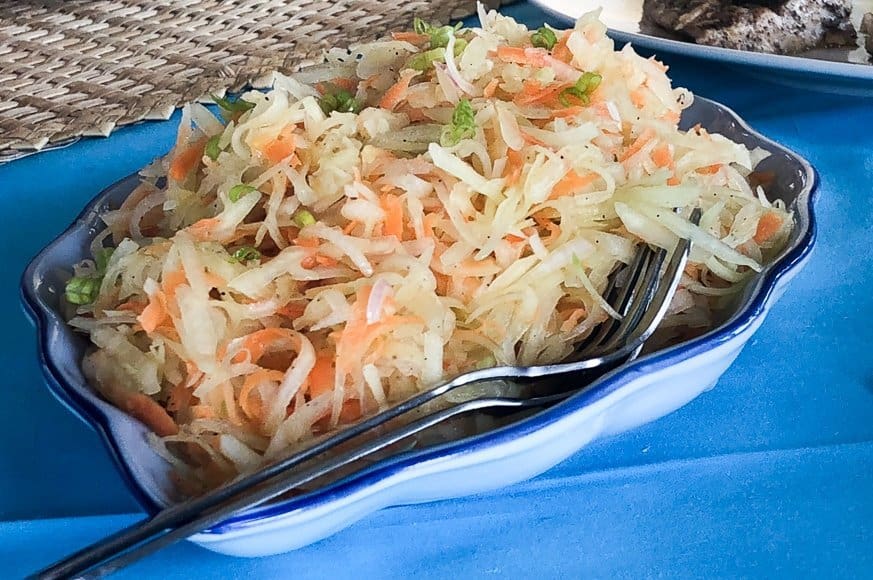 Desserts are mainly fruit based with mangos, papaya, bananas and coconut featuring heavily. Honey is also produced on the island. 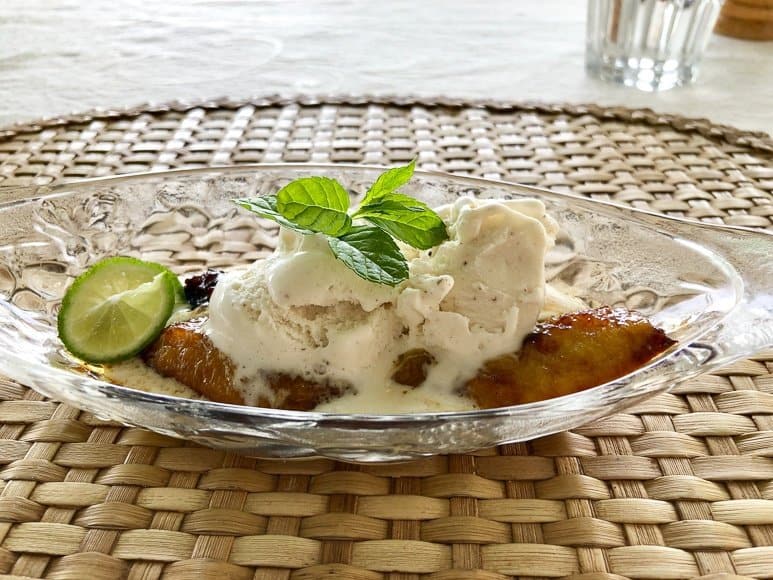 Rodriguaise pie, or Rodrigues cake is a sweet thick-crust pie made with a confit of papaya, coconut and cinnamon. We invaded Delly’s kitchen who showed us how to make her speciality pies which are sold all over the island. She also makes pain d’epices an artisanal cake from Rodrigues made with ginger, star anise, cinnamon, honey and lemons.

Small green lemons are unique to Rodrigues and look just like limes. They’re grown all over the island and are found in many desserts and are also used to make a refreshing lemon drink with sugar and water.

We visited Valerie to see marmalades and jams being made with the lemons and various other citrus fruits and spices. The confiture is homemade and although it’s a small-scale production this is no mean feat as Valerie is blind.

I bought some lemon and ginger marmalade to bring home and rue the day we finished it! Valerie also made us the best lemon meringue pie I’ve had in ages, just the right amount of tartness and not too much sugar. Spot on. 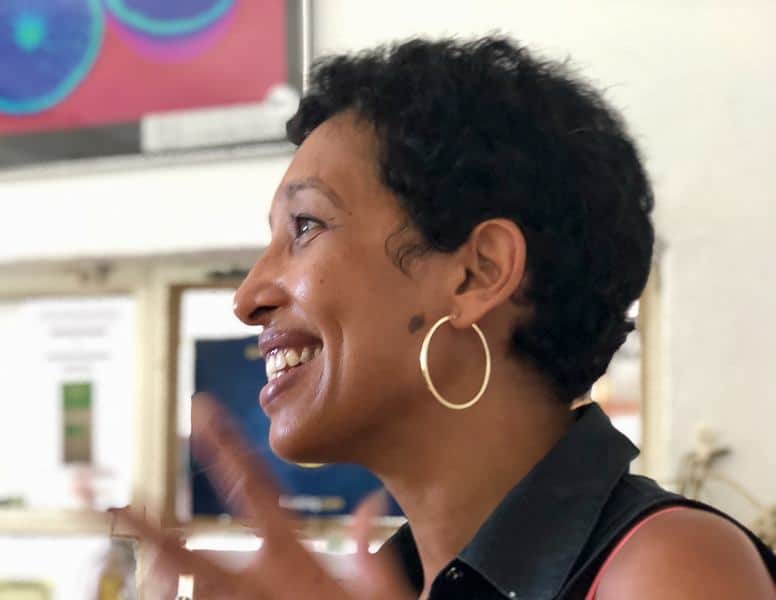 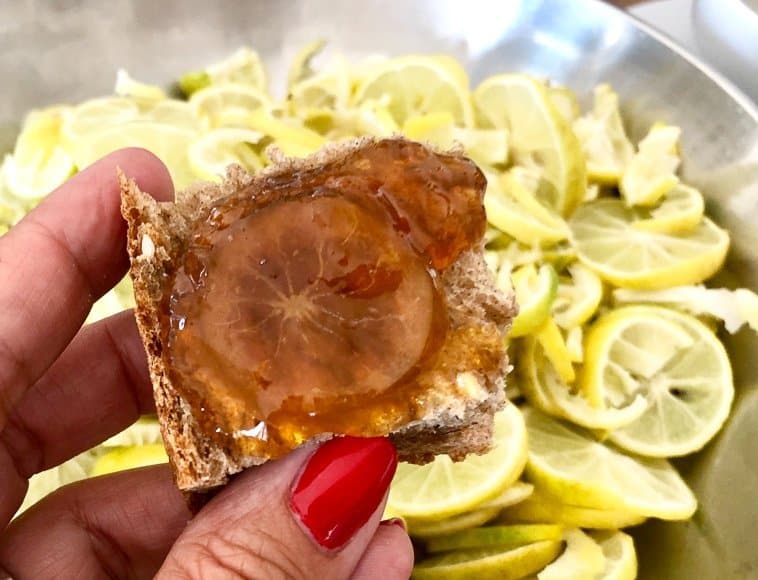 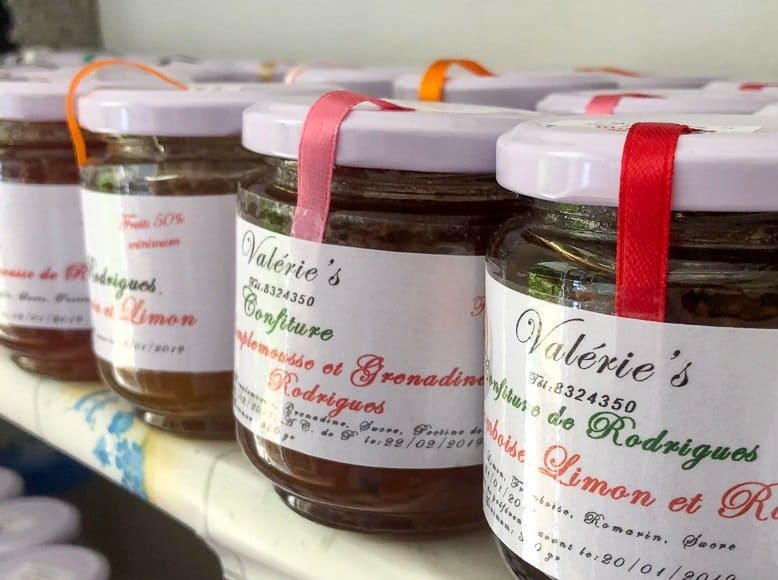 What to Drink in Rodrigues

Coconuts can be bought at the beach, on stalls around the island or at the market. The vendor will expertly machete the coconut husk away in seconds and hand over your fresh coconut water in its ready-made container. So refreshing.

Ti’ Punch, short for ‘petit rum punch’ is popular all over the island. Add lemon juice to a base of rum and sugar syrup and you have the perfect sundowner. Most agreeable! 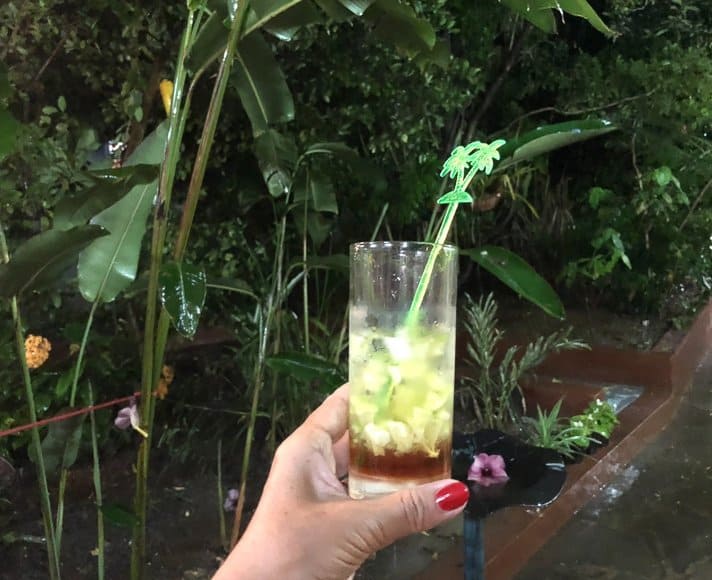 Rodrigues’ local beer, Phoenix, is from a Mauritian brewery. It’s a crisp, refreshing lager that quenches the thirst perfectly and goes well with pretty much all island food.

We spent an hour with a delightful old couple who produce their own coffee from a huge tree in their garden. After seeing how they roast and grind the coffee we sat with them in their living room enjoying a cup with some home-cooked snacks. A priceless experience! 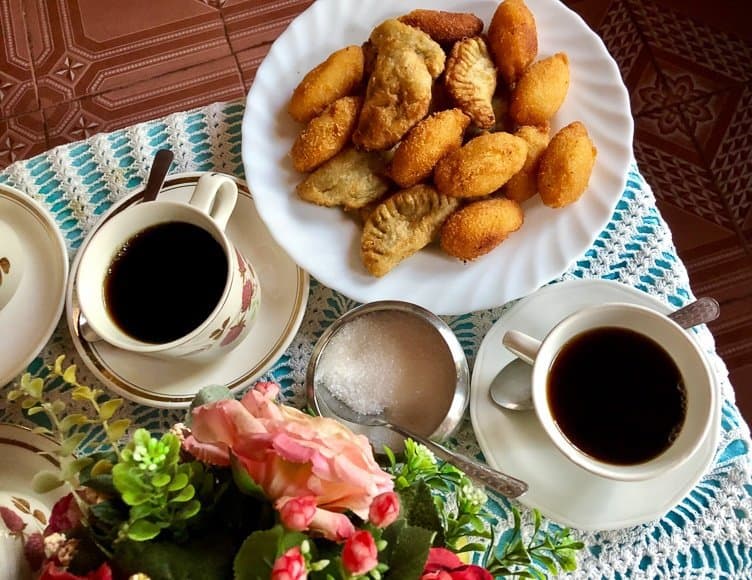 There’s some excellent food to be eaten in Rodrigues and I pretty much sampled all types during my week on the island! It’s fresh, healthy, authentic and extremely tasty. I hope you have the chance to sample it yourself one day but remember, go easy on the chilli sauce… 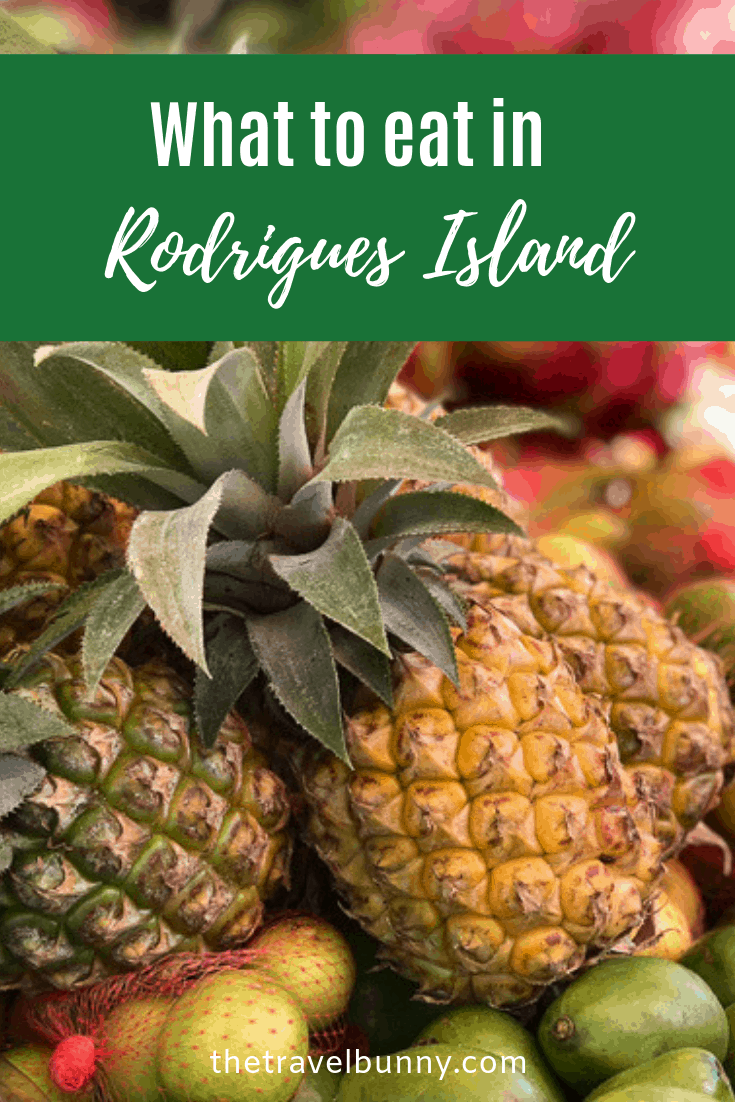 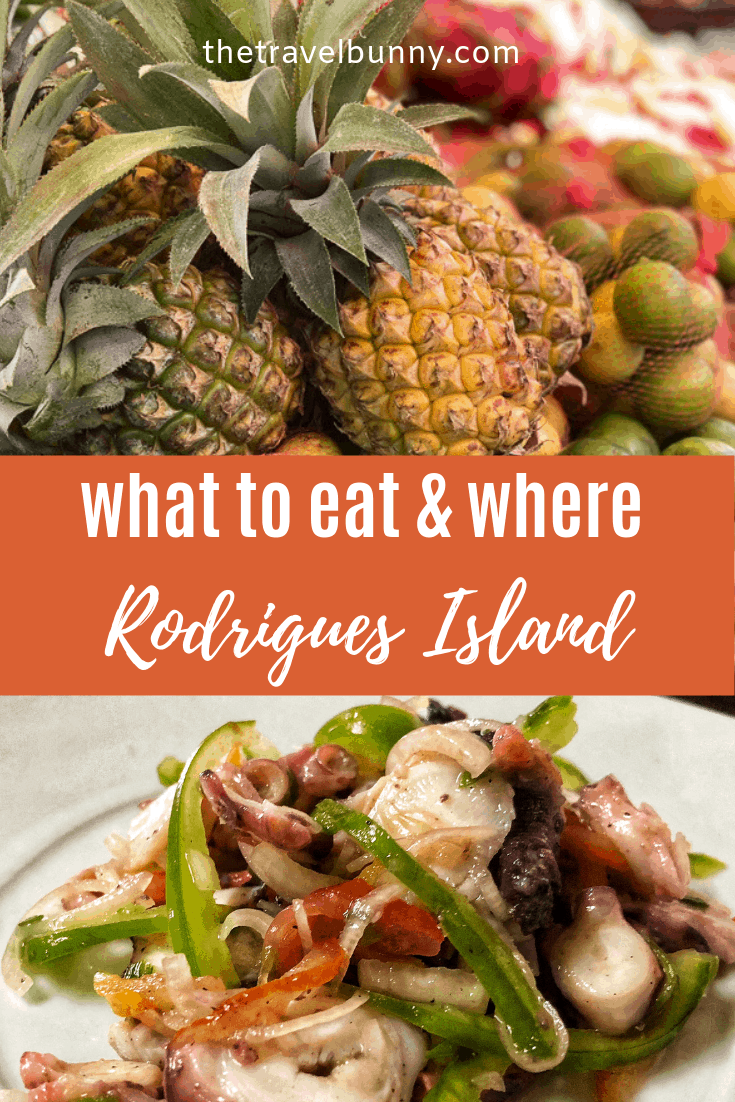 My thanks to tourism office  who kindly hosted me on this trip. I flew to Rodrigues Island via Mauritius with Air Mauritius.  I stayed at La Belle Rodriguaise and at Villa Evasion. All thoughts and opinions are entirely my own.

This is essentially seafood heaven! That sandwich is one of my favorite ways to have tuna, with tomatoes and onions! YUM! Of course the atmosphere must have added to the enjoyment of that delicious sandwich. I'm sold on the food of Rodrigues Island!

The food was so good - fresh, local and organic. What more could you ask!

I'd love to try rougaille, as well as the papaya salad which looks so fresh. Visiting the food market must have been fun too. Visiting Rodrigues is definitely on my wish list

The papaya salad was delicious and really refreshing in the heat. Rougaille is so good that I'm trying to find a restaurant that cooks it in the UK - otherwise I'll have to learn to cook it myself!

It all looks so light and tasty – just what you need in that tropical heat. I enjoyed a few ti punches in Guadeloupe and they definitely have a bite!

They make the perfect island sun downer don't they!

Right, a petit rum punch and baguette filled with Bekin fish for me please! Just gobbled this post up and if I ever go, I’ll definitely follow your recommendations!

That's the perfect combo! you'd be hard pushed to find a bad meal in Rodrigues...

Wasn't that breakfast on the boat wonderful?! I didn't particularly like the sound of it but the first bite told me how wrong I was. So many memories of wonderful people and fabulous experiences. I almost feel a bit tearful thinking about what a wonderful week we had there. I've so much more about it I want to write on my blog I need 48 hour days please! Aren't we lucky to have been invited to this magical island.

It was an incredible week with so many unique experiences and lovely people. We were very lucky to have been to Rodrigues.