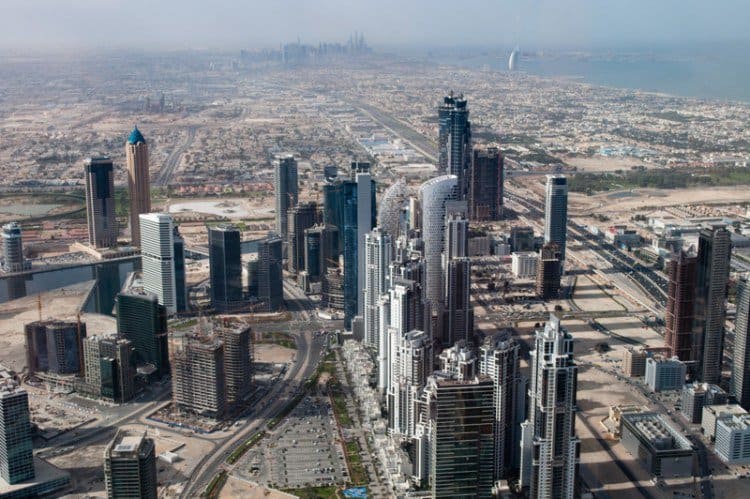 Skyscrapers don’t come any taller than The Burj Khalifa and as we arrived I craned my neck and looked up, and up, and up as it loomed over me but the top was way out of sight. Soaring high into the sky above Dubai at 830 metres to the tip it’s the world’s tallest building. I love looking down on the world from way up high so when I discovered that a visit to ‘At the Top’ of Burj Khalifa was on our Dubai itinerary I was more than a little excited. 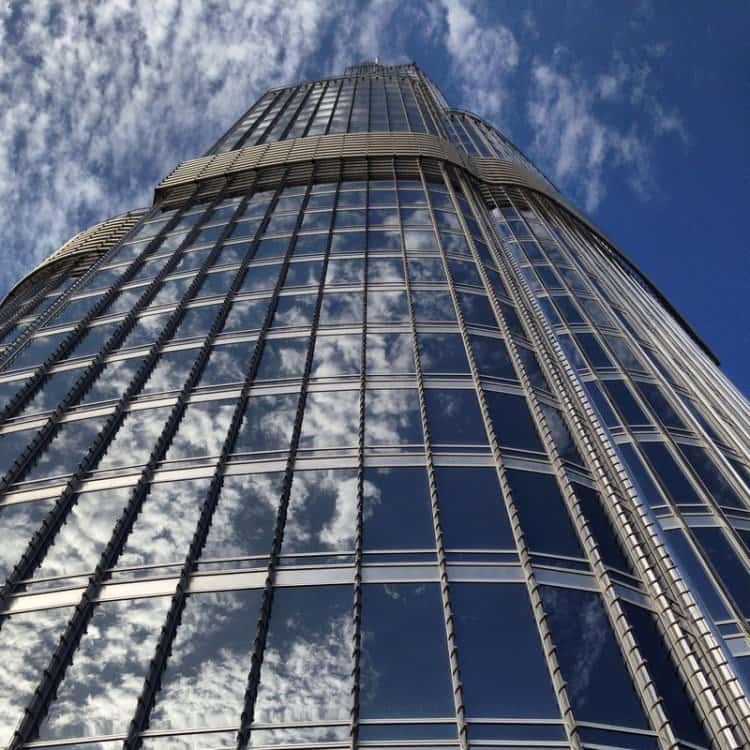 Inside as we waited in the reception area on the lower ground level of Dubai Mall we checked out a model of Burj Khalifa and some of the facts detailed on the base.  The tip of the spire can be seen from 95 km away; the weight of the empty building is 500,000 tonnes and the building opened in January 2010 after taking six years to complete. There are a stomach-churning 162 floors. The tower was designed by architect Adrian Smith and engineer William Baker. 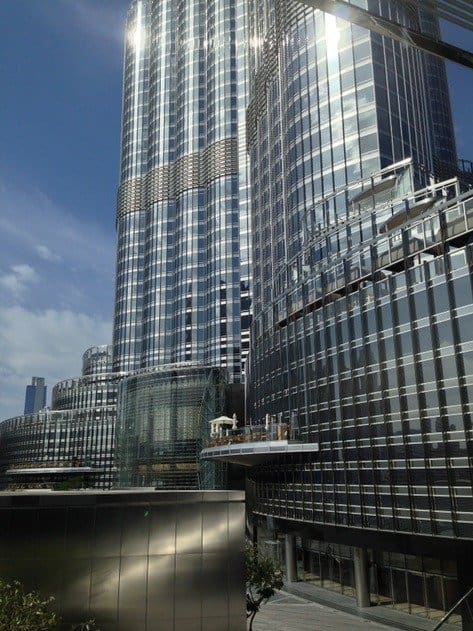 Life on the Ledge

Security is tight and large bags need to be stored on arrival and collected on the way out.  Our smaller bags and cameras were scanned and we stepped through a scanner, like at the airport.  After this we made our way to one of the lifts along corridors lined with graphics, construction information, photographs and facts.  We stepped inside the elevator, the doors swished shut, and as we began to ascend so did the excitement.  The floor numbers clocked up faster and faster as the lift rocketed up at 10 metres per second.  It’s one of the world’s fastest.  At floor 90 my ears popped and the drama accelerated; patterns of light flashed around the walls and the music intensified before we smoothed to a halt, the doors opened and light flooded in.  We stepped out onto the observation deck known as ‘At the Top’.  We were on floor 124 of Burj Khalifa the tallest building on the planet. 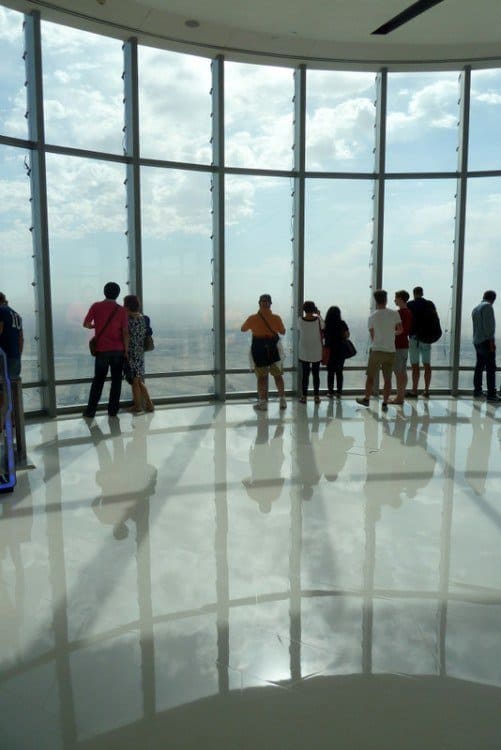 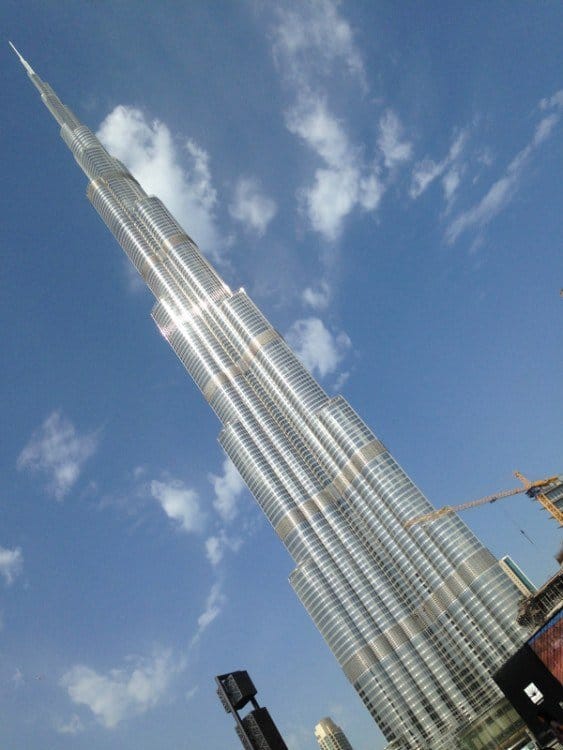 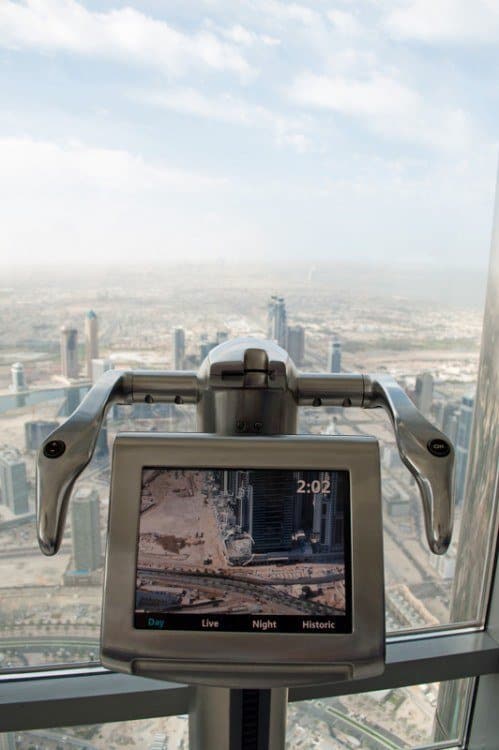 The windows are floor to ceiling and as it was a day clear day the panoramas over the city were mesmerising and I soaked up the sky high 360-degree views of Dubai, the Arabian Gulf and beyond. 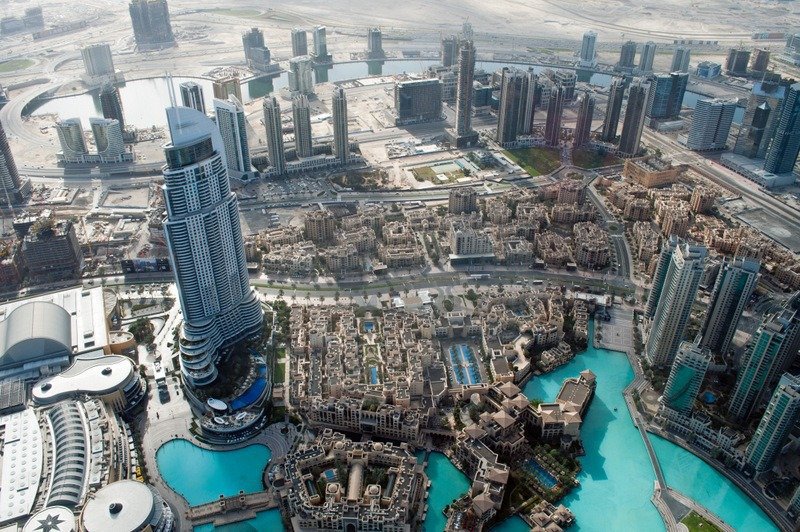 Looking down on Dubai

The high-rise buildings that we craned our necks to see from the ground looked like miniature Lego buildings from above.  A network of roads transported ant-like cars and in the distance I could pick out The Burj al Arab, Jumeira Beach and the World Islands.  I walked the full perimeter taking photos and just gazing – I could have stayed all day.

At some of the windows are moveable telescopes which offer more detail on LCD screens. The high-tech devices can zoom in and switch to a pre-recorded version so the user can see what the view looks like on a clear day, or at night no matter what the weather outside is doing.  There’s also a history button which shows how the landscape looked before it was built on.

We had really clear views for our 10 am visit but you might like to book for late afternoon to take in sunset.  This way you’d get views in the daylight, as the sun goes down and then another perspective as the city lights up at dusk. Three different types of view in one visit although prime time is more expensive.  Also you’re in the right place to watch the Dubai Fountain.  It’s the world’s largest choreographed fountain system, accompanied by classical and contemporary music and illuminated by 6,600 lights and 25 coloured projectors.  At 275 m (902 ft) long it shoots water up to 152.4 m (500 ft) into the air and is visible from all around the promenade – evening performances take place daily 6 pm – 11 pm every 30 minutes. We stayed about 1.5 hours which was plenty of time to soak up the views before heading to Dubai Mall to explore. 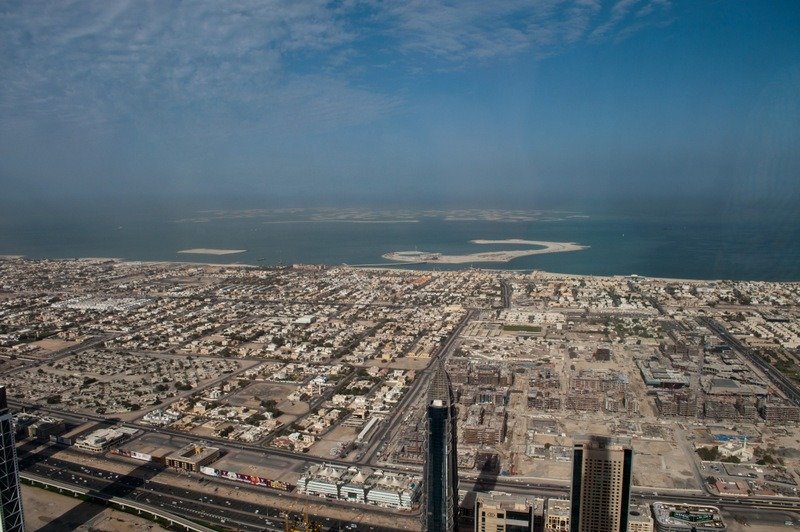 World’s Island in the Distrance

Tips for visiting the Burj Khalifa

How to get to the Burj Khalifa

Signs told us that all sessions for the next day were fully booked.  I’d advise you book on-line as far in advance as you can – it’s also cheaper than paying on the day if there’s availability.

Check prices and availability for the Burj Khalifa

The entire ‘At the Top’ experience is wheelchair friendly but for those who might need to rest often there are no sitting areas. 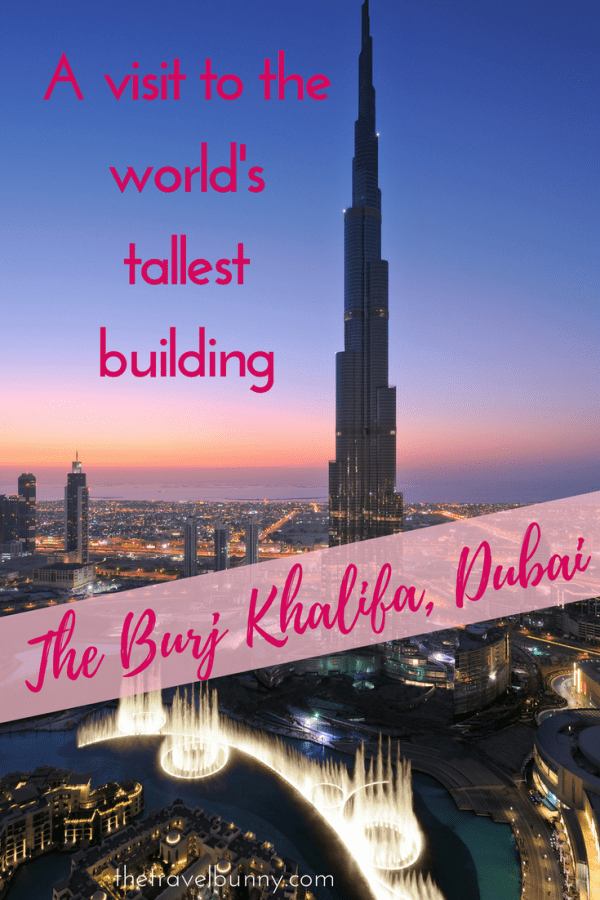 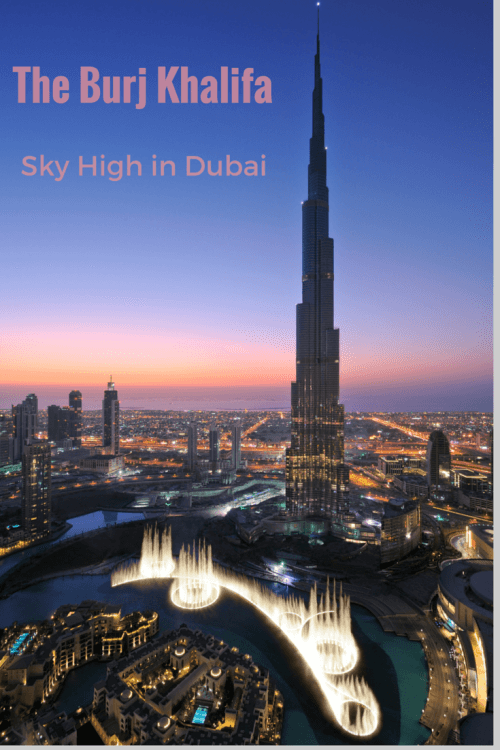 Disclosure: Many thanks to Dubai Tourism and The Ritz-Carlton Dubai who kindly hosted my visit to Dubai. Opinions and views, sky-high in this case, are entirely my own.

I've taken your advice and booked my tickets for late afternoon to enjoy the sunset and the fountains for my trip in a few weeks. Is there a bar or a café on the same level as the observation deck?

I don't think there's a bar and I don't remember seeing a cafe. The Burj is right by Dubai Mall which has loads of eateries although not sure you'll be able to buy alcohol - you'd probably need to be in a hotel or restaurant for that... Which hotel did you go for in the end?

[…] so much else to see in Dubai.  One of the highlights was a visit to the observation deck of The Burj Khalifa, the world’s tallest building.  Posts are ongoing so check back for more Dubai delights; food, […]

Five Sides of Dubai | The Travelbunny

Wow the views are incredible! I love your photos :) thanks for all the booking tips.

Amazing photographs! I was able to visit 2 years ago yet every time I see photographs of views from the Burj Khalifa it still astounds me no fail. You're so high up it's like being in a massive glass airplane :)

That's so true - it is like being up in the clouds!