Three days in New Orleans and you’ll have soaked up the jazz on Frenchman Street, got spooked on a cemetery tour, drooled over a crawfish boil and sipped a Sazerac at the iconic Carousel Bar.

All these, and more, are essential activities on a trip to NOLA but to really get a feel for the Deep South there are one or two-day trips from New Orleans that’ll give you an added insight into Louisiana life. 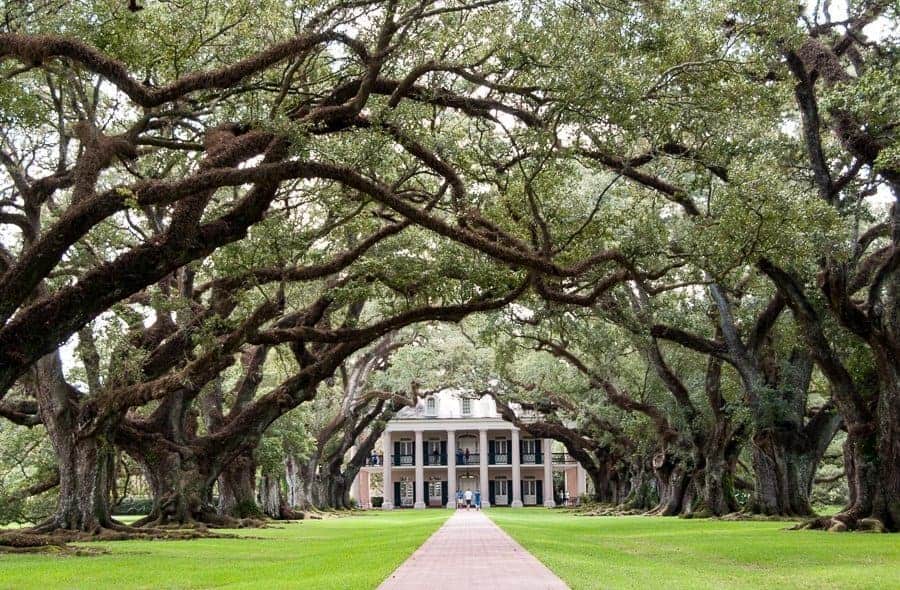 This post may contain compensated links. Find more info in my disclaimer

Day four might see you wanting to leave your vacation rental in New Orleans and take a jaunt outside the city. Here I recommend two New Orleans day trips which can be taken individually as a half day tour or combined into one full day trip.

The first, a New Orleans plantation tour, offers an insight into black history, plantation life and architecture. The second, in complete contrast, is a foray into eco-territory for a Cajun swamp tour for gator and wildlife spotting. Whichever option you choose, half or full day, you’ll be back in New Orleans with time to enjoy a night out in NOLA.

If you don’t want to take an organised tour you can go independently. We hired a car using car hire comparison site. Check Rental Cars Connect for rates and availability.

Oak Alley Plantation Tour – A visit to an Antebellum House

Oak Alley is one of Louisiana’s most photogenic plantations and was built in 1839. The Antebellum house is named after its canopied pathway lined with 28 gnarled oak trees dripping with Spanish Moss. The ancient Southern Oaks were planted long before the house was built in the early 1800s.

What an ingenious idea to mirror them with a colonnade of 28 Doric columns supporting the wrap-around balcony. Imagine sitting on that balcony sipping a Mint Julep as Rhett Butler gallops up through the oak canopy on a sultry southern evening. I digress… 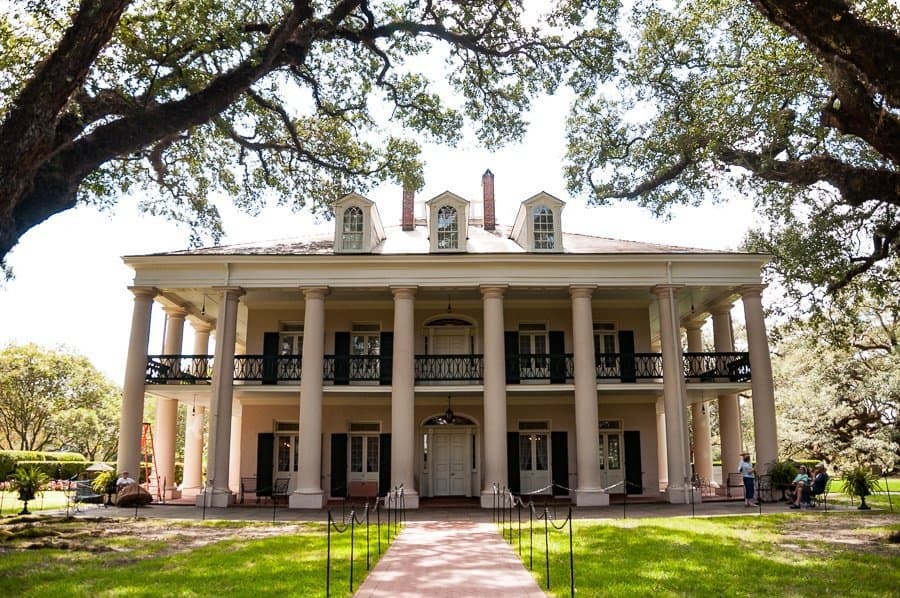 Tours around the ‘Big House’

To see inside the mansion, you’ll need to take a guided tour. We were shown around by Lacy, who, along with the other guides swished her way around the house in period costume. 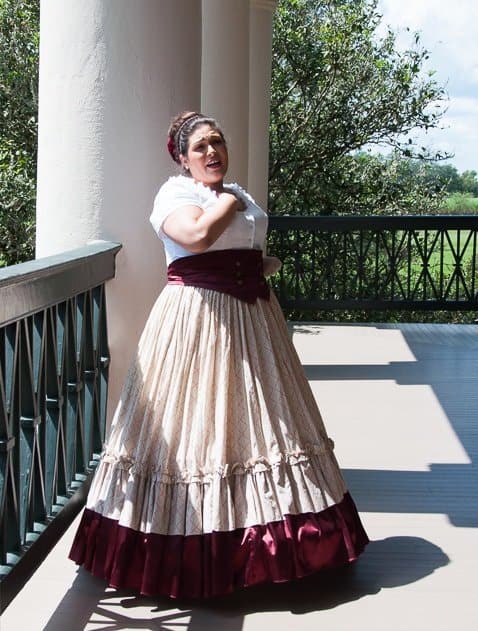 We learnt about the history of the plantation, about the families that lived there and some interesting facts about life in the Big House. How an enslaved black child would fan the family at mealtimes using the huge ceiling-mounted Punkah, or Shoe Fly Fan, and that the silver cutlery was laid tine down to show off the hallmarks to guests.

Life in the Big House was oppulent and luxurious – a world away from the conditions the people who were enslaved and forced to work in the plantations had to endure. 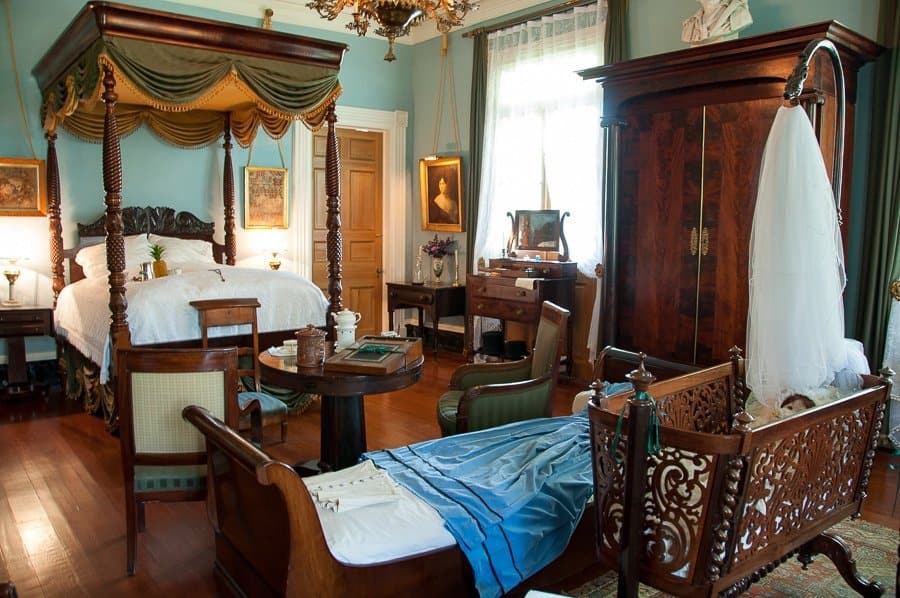 Being a plantation house, Oak Alley has its darker side and it touches on this part of its grim history. The plantation records detail the history of the people that were enslaved on the property. From the early 1800s through to emancipation, over 220 black people were enslaved and forced to hard labour on the plantation and in the house.

The reconstructed slave cabins are basic in the extreme with very few facilities. The people worked incredibly long hours with very the bare minimum of food and little, if nothing, time off.

We listened to a guide who gave us an insight into the daily toil and labour that these people suffered.

“Between 1836 and the civil war, over 220 men, women and children were enslaved at Oak Alley. Dehumanized and quantified like any other commodity, they appear in sales records and inventories, yet as people they have been forgotten by history.

This is a respectful recognition of those people on whose backs this plantation was built. For most of them a name is all that remains of their story.” 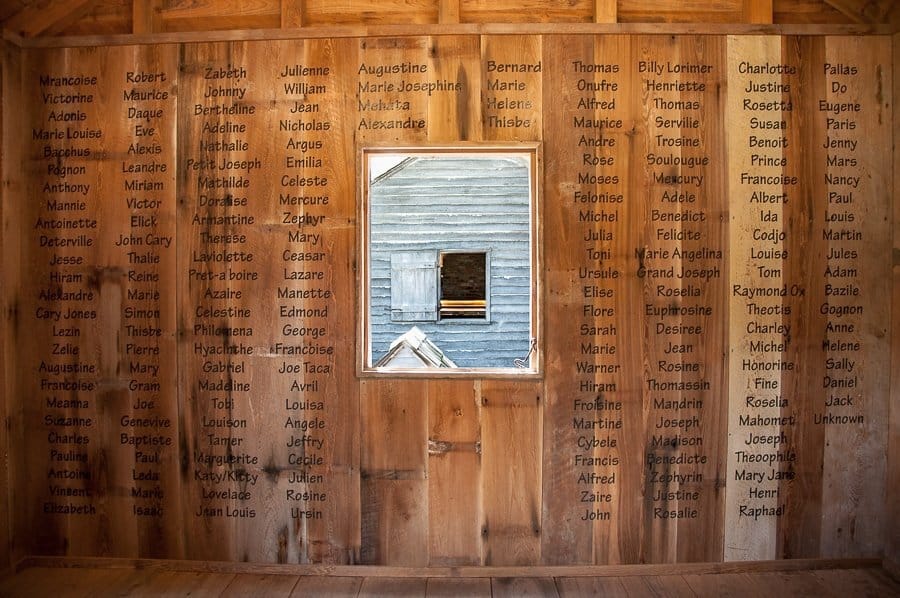 The names of those enslaved at Oak Alley Plantation (above) and a reconstruction of their basic living quarters (below). 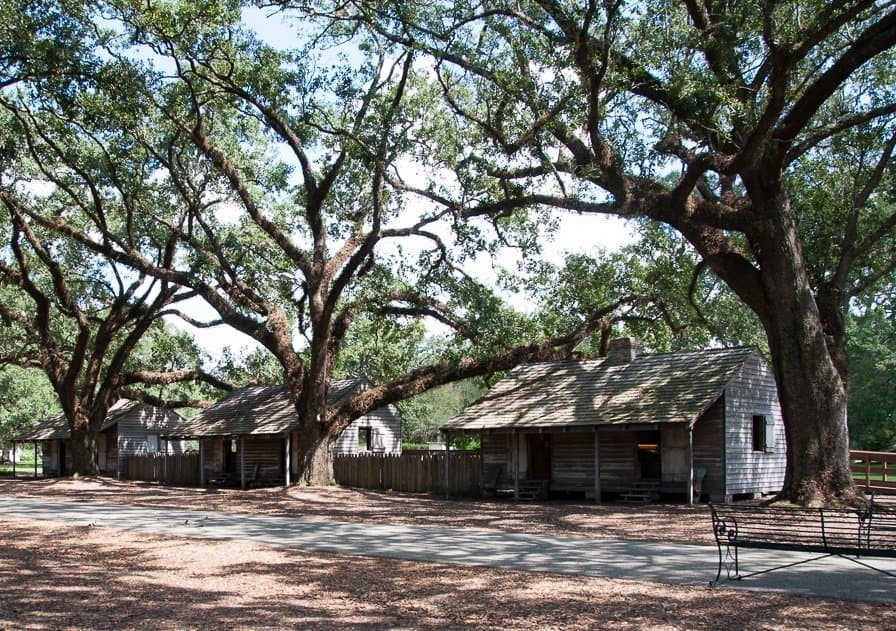 There’s a small exhibition and theatre about how sugar cane was grown and processed at the plantation, a blacksmith forge and a recreation of a civil war tent. It’s worth seeing these before you take the ‘big house’ tour and will take around half an hour. 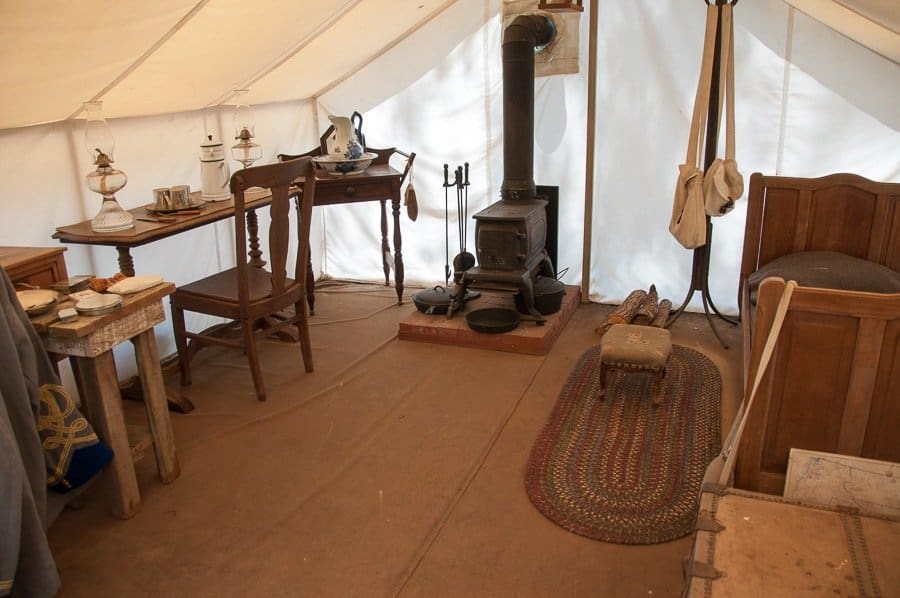 What does Antebellum mean?

Antebellum comes from the Latin phrase ‘before the war’ and refers to the four decades leading up to the start American the Civil War in 1861. It was a dark time in the history of the Deep South where economic growth was based on slave-driven plantation farming. 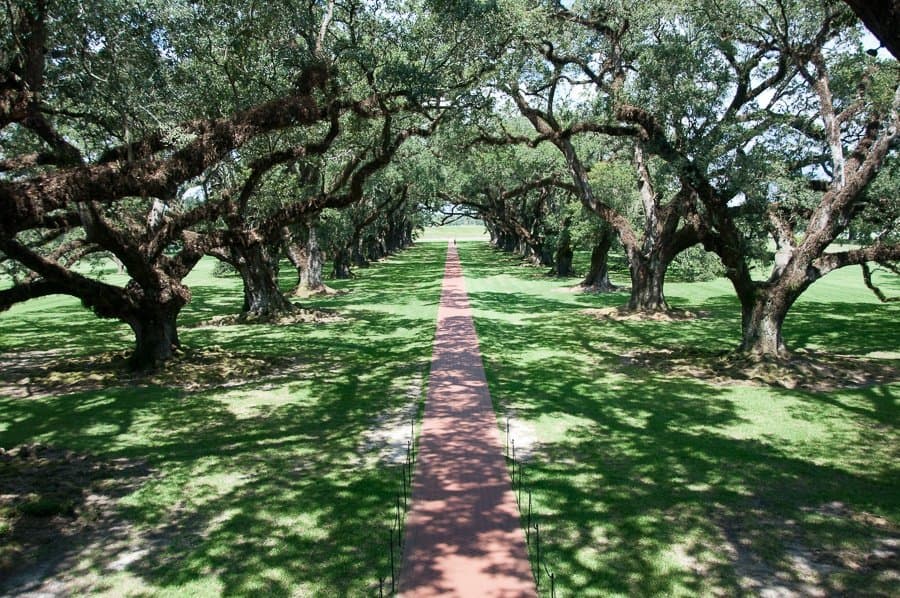 Where is Oak Alley Plantation?

The plantation is located on the Mississippi River in Vacherie, Louisiana, just under an hour’s drive from New Orleans along the great winding River Road. 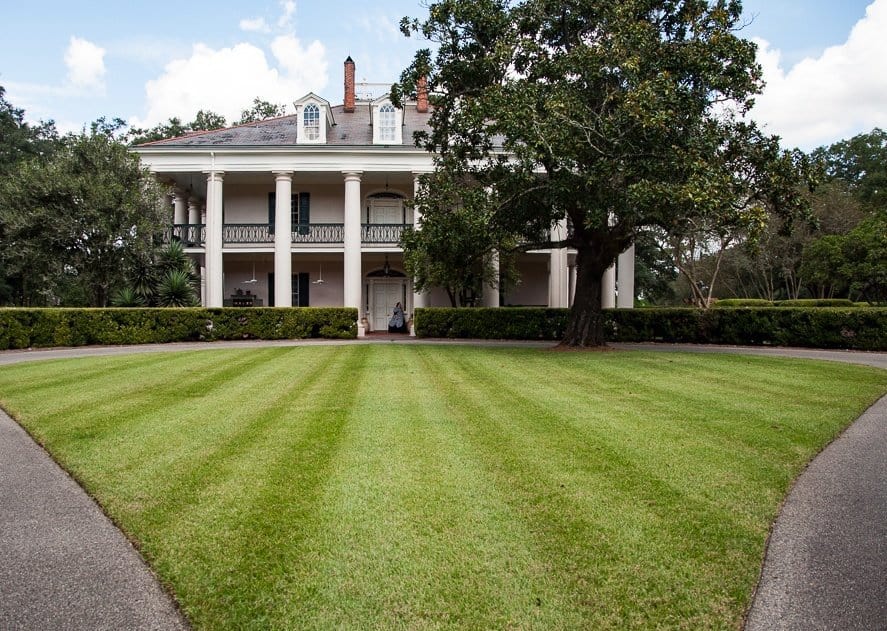 The house has featured in a whole heap of movies, TV shows and music videos. Interview with a Vampire, Days of Our Lives and Beyonce’s Deja Vu video.

If you don’t have a car, tours are available which’ll pick you up from your hotel and drop you back afterwards. Check out the latest prices and tour details here. Be sure to book online – they charge a higher rate if you book over the phone.

How to visit Oak Alley Plantation

Headed to NOLA for a long weekend? Check out my city guide with tips on what to see and do with three days in New Orleans. All the food in New Orleans – What to eat and drink in the Big Easy and where to find it

The next New Orleans day trip includes adventure in the swamps, gators and Cajun living on the Bayou. 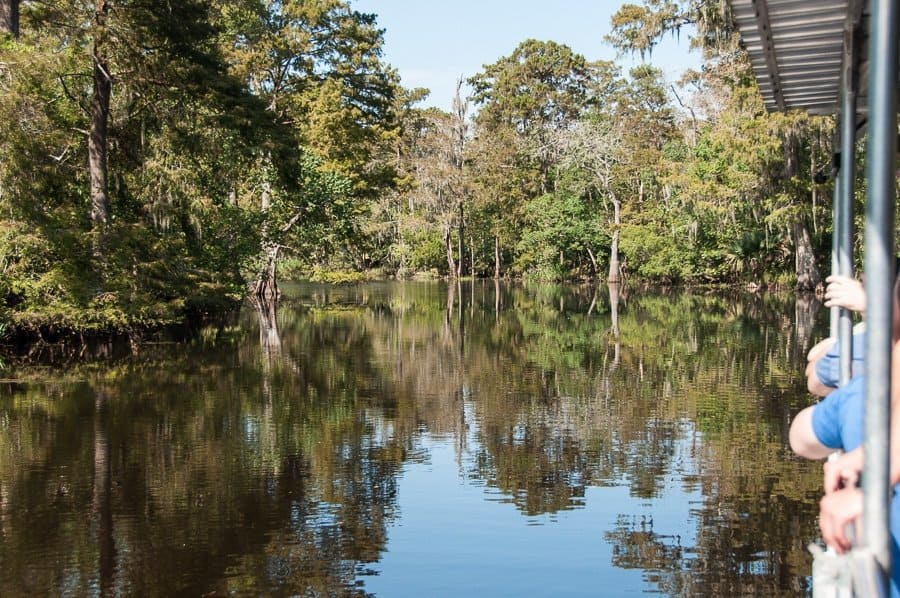 We’d considered an airboat trip or kayaking through the backwaters but eventually decided on an eco-tour by boat for our Mississippi swamp tour. I’m glad we did, Lacey our tour guide at Oak Alley had lost most of her left arm in a tussle with an alligator. No way was I kayaking after hearing that! On the boat, we were safely out of reach of the wild alligators that mooch the meandering tributaries and lazy backwaters of Louisiana.

We boarded, along with around 20 others and Captain T Tom, and set off up the slow-moving Manchac swamp. We drifted under cypress trees swathed in Spanish moss which almost touched the murky water in places. 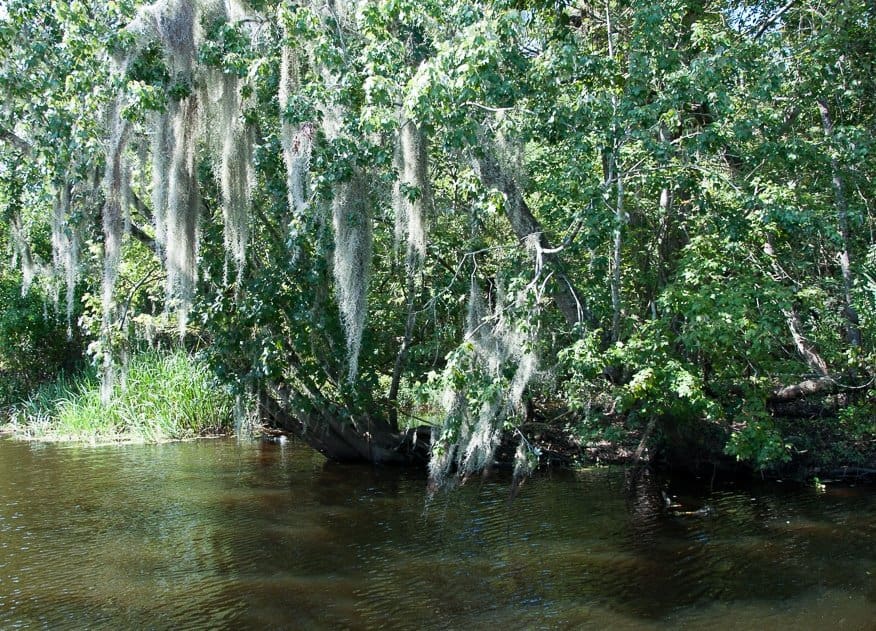 The swamp is a privately-owned wildlife refuge with no fishing or hunting so we were the only boat on the bayou. It wasn’t long before we heard rustling in the undergrowth – but it wasn’t the gators we were expecting to see. A group of cute-looking racoons were peering at us from the bank. Quite apt really as the collective noun for racoons is a gaze. They might look cute but according to Captain T Tom they’d rip a rattlesnake to shreds within seconds. 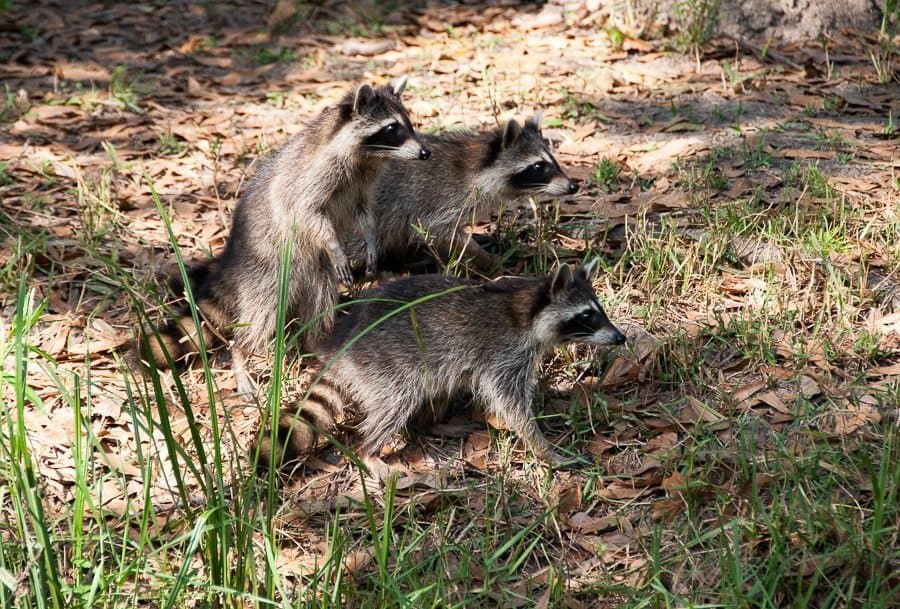 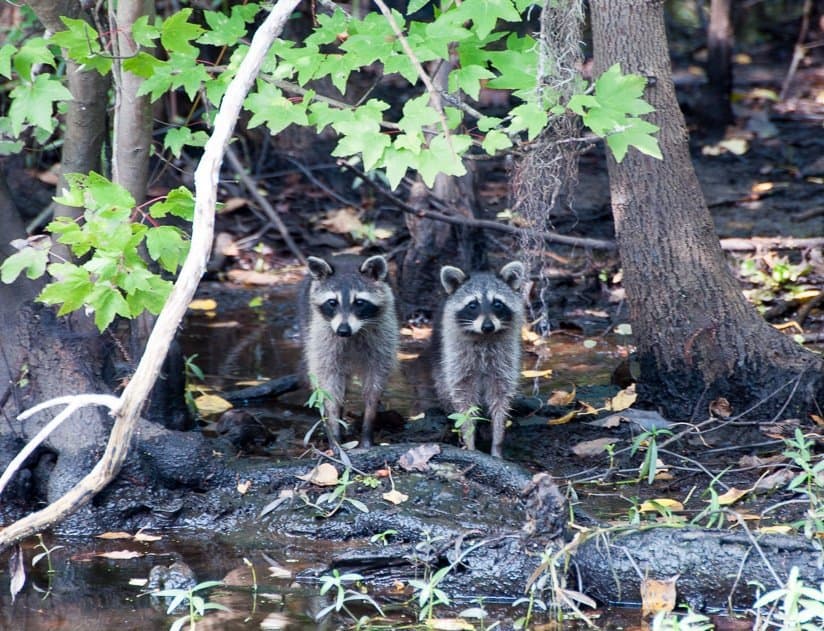 We floated along the peaceful waterways that the Choctaw, Chickasaw, Chitimacha, and Houma once called home. There’s evidence of more recent habitation in the swamp too. We passed a rickety trappers hut and a fenced cemetery with crooked crosses. 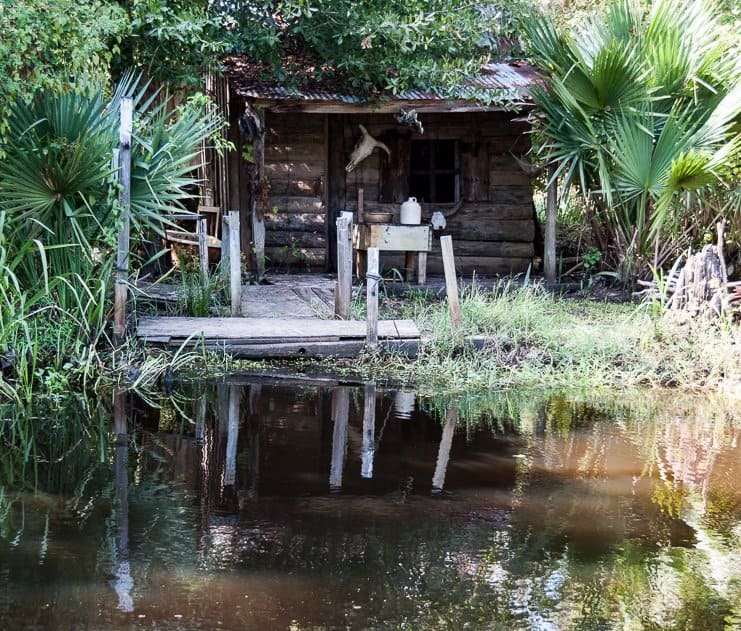 On 29 September 1915 a devastating hurricane struck the area. The violent storm swept through Louisiana flattening many towns and the small swamp town of Frenier. Almost every one of the inhabitants died. A cemetery was constructed and Freniers’ dead were buried in a mass grave. 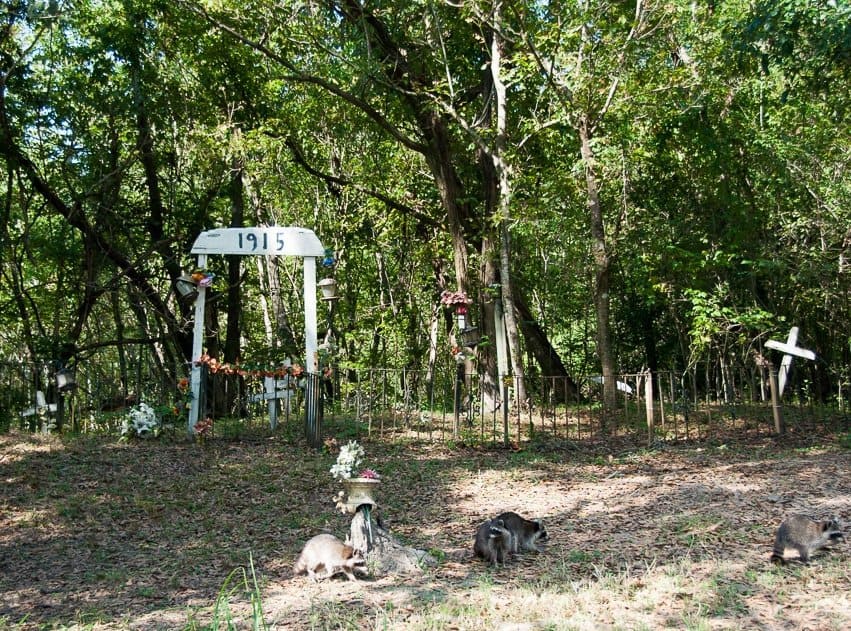 It doesn’t take long before there’s a ripple in the water and a gator emerges and glides along behind us. Then there are three, and another on the bank. They’re big. We slow down and Captain T Tom lures the gators closer with raw chicken.

The leathery creatures stretch up out of the water, their massive jaws gaping, and snap the chicken from the stick. Seeing its spiked teeth made me think of Lacey, the girl from Oak Alley, and how her two friends fought off the gator and saved her life.

When recovered, and home from hospital the first meal she had was made with that very same alligator. I’d have had shoes and a handbag made too. The gators were present for the most of the 1.5-hour tour. We saw about a dozen, although there were probably many more. 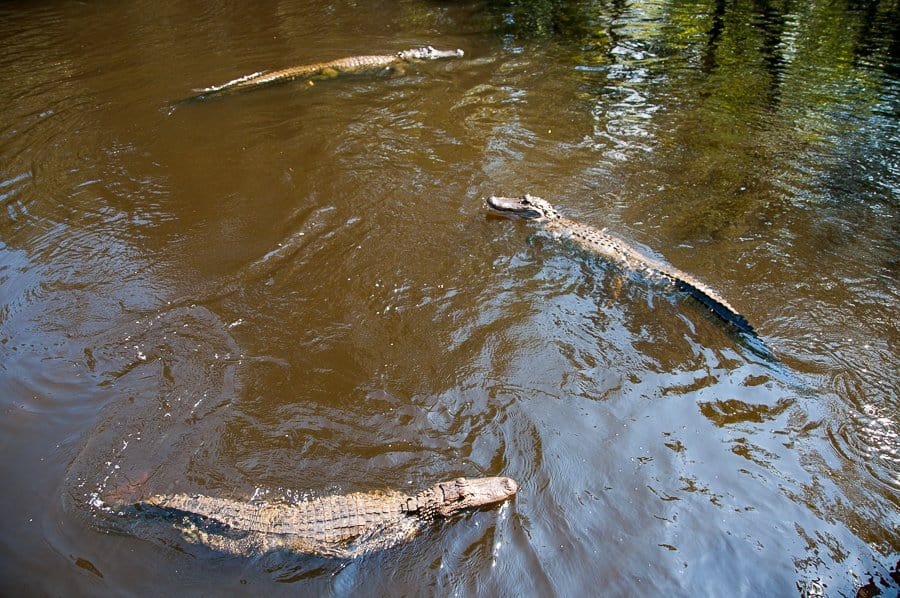 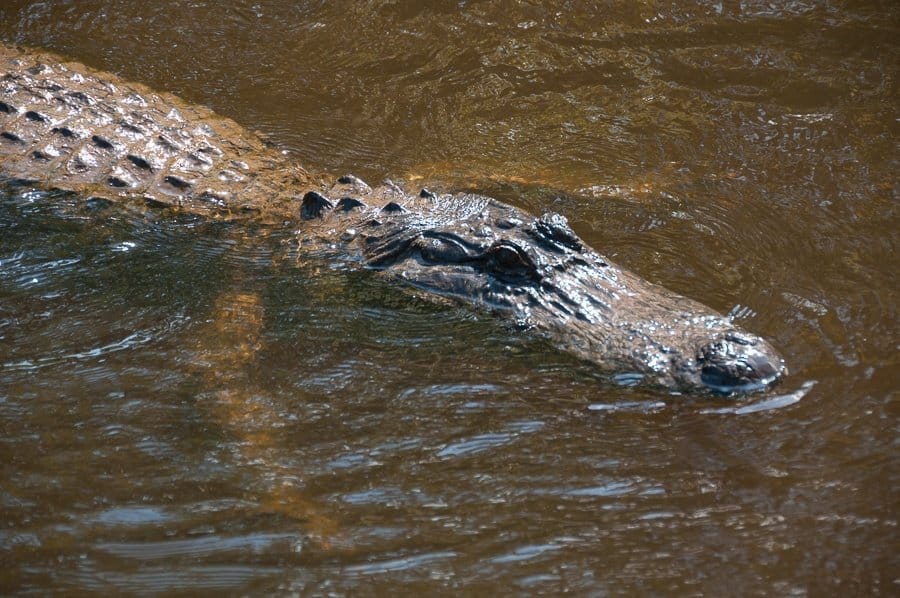 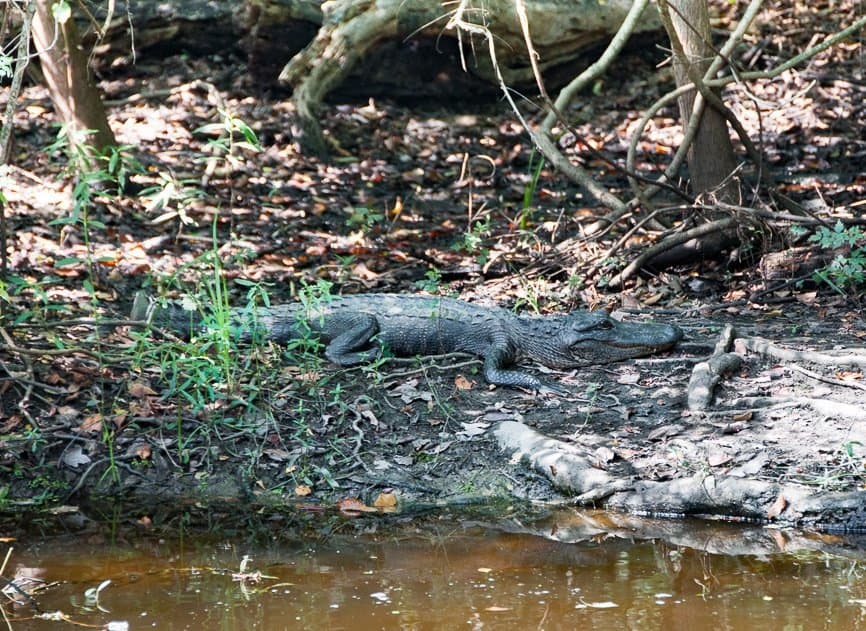 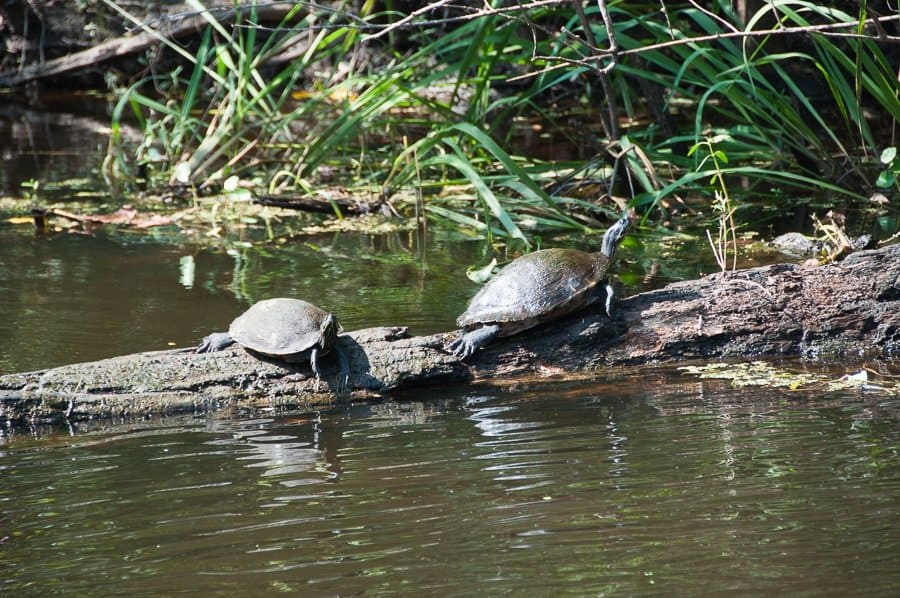 Captain T Tom was born in Cajun country and speaks Cajun French. He’s from the Houma Nation tribe and is passionate about the wildlife and nature of the swamp. When asked if he’d ever move to the city he laughed and replied with an emphatic ‘No way!’

He couldn’t imagine ever living anywhere else. Tom told us about his Cajun roots, living off the land, moving around from season to season and providing for his family by shrimping and fishing. His knowledge, love of the swamplands and humour really made the trip special. 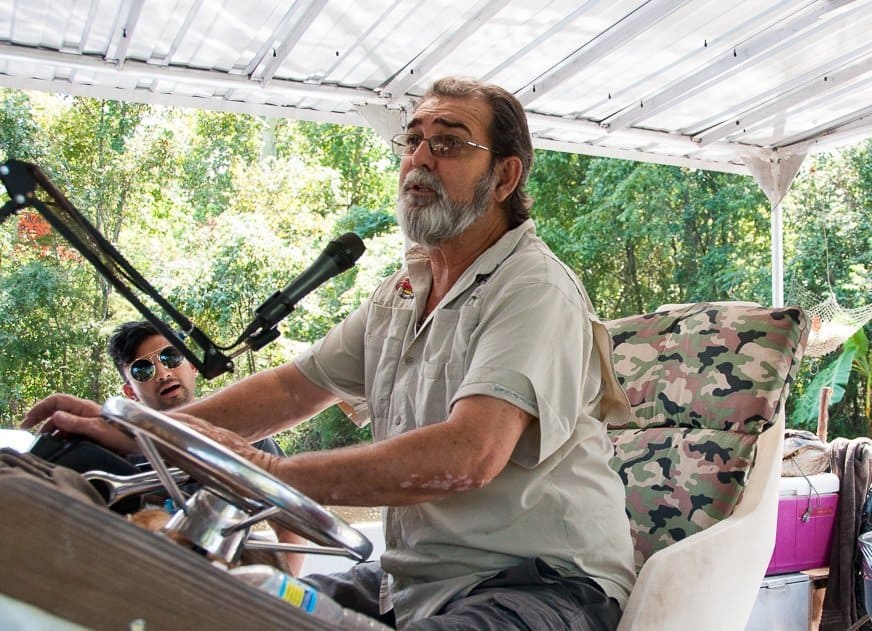 We visited both places after picking up our hire car from Rental Cars Connect and leaving New Orleans at the start or our Deep South road trip. Shuttle tours are also available that’ll pick you up and drop you back at your hotel on a day trip. Find out more about the Oak Alley Plantation Tour and Cajan Pride Swamp tour.

There are day tours that take in both Oak Alley Plantation and the Cajun Pride Swamp tour with pick up/drop off at your hotel. Check availability and prices at Get your Guide and Viator.

Pin it for Later…

I know I’d love both these trips. I do hope I manage to find my way to New Orleans one day. It all sounds fabulous.

I hope you do too, they were both great trips and totally different from each other.

Wow! The views of new orleans looks amazing! Would love to visit some day! Great post!

Yes, everything was covered. I stayed along Charles Ave and everything was just banged up. The storm passed during the night - and I was flying home the next morning - I was lucky I got a cab ... and we were the first car on the motorway to the airport. Nearly no staff at the airport. Only about 15 people in total. My flight to New York was the first one out. No food inboard. September is the worst month for hurricanes. Strange in the morning after - no a sound outside. Total silence. That was scary and the water outside the hotel was about 30 cm deep. Had to take roll up my trousers and carry my suitcase out into the street, because the taxi wasn't able to drive closer to the hotel entrance.

Lucky it was at the end of your trip and not the beginning. I remember the night before the big hurricane in the UK years ago - everything was very still and quiet - weird feeling.

Fantastic post as always .... I was in Nola the year before Hurricane Katrina - and when I visit this plantation, our guide told us that Nola will sink one day, because the city is low then the water level on all sides. I visited this plantation the day before the hurricane Isidore hit us ... everything around the main building was all getting secured, but we manage to get lunch. A fantastic piece of American history. Never did the swap, but I spent a day on their Zoo ... got the boat myself over there. I didn't click to 100% with Nola, but I enjoyed my time there. I found it a bit to commercial and steaming hot. 92% humidity in September when I was there.

I do hope it doesn't come to that - I know flooding is a problem and the graveyards are all above ground because of that. Did you have to batten down the hatches during Isidore? Must have been scary. There were parts of the city I wasn't keen on but I loved Frenchman Street and that area. The weather when we were there in September was just right around at around 78 degrees.

Both look fantastic – and a great contrast to city life in New Orleans. I so want to go and explore this part of the US and have a few more ideas to add to the itinerary now!

It’s always good to wander outside the city wherever you happen to be. There are usually some nice surprises!