The first time I saw a photograph of Burano and its prettily-painted fishermens’ houses interlaced with quaint canals I knew I would have to see them for myself one day.  Burano is made up of four islets linked by bridges and is located at the northern end of the Venetian Lagoon around 6 miles from Venice. We took a scenic 45 minute Vaparetto ride passing the cemetery island of San Michele, Murano where the traditional Venetian glass is made. We passed Torcello and other tiny islands in the lagoon en route to catch some of Burano’s local colour. 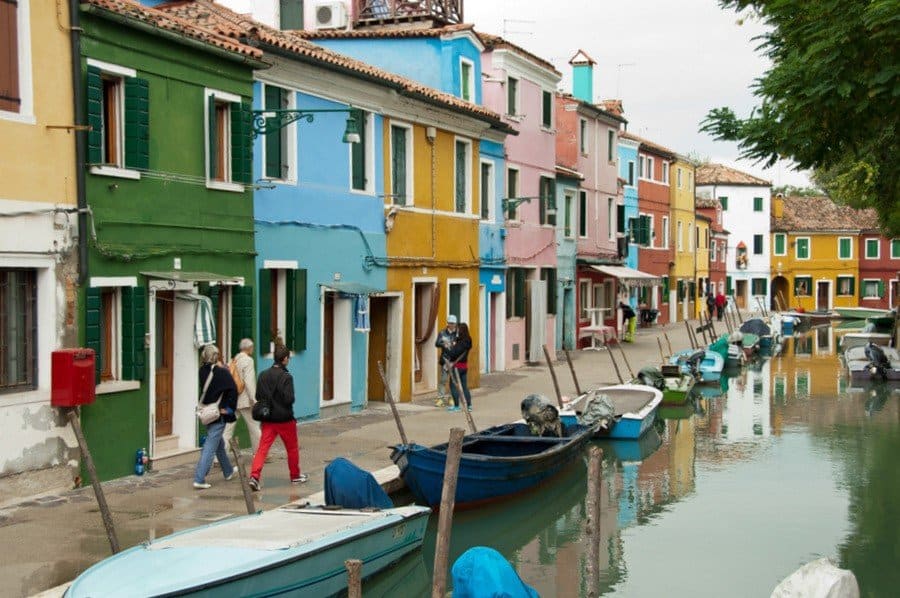 The Colour of Burano

The day was dull and dreary but the rows of vividly coloured houses dazzled – the sun might just as well have been shining it’s brightest in this tiny, technicolour town. The small box-like houses are painted in eye-popping primaries or in softer pastels with shutters and front doors in contrasting colours.  A forest-green awning flaps against purple masonry. Across the street lime-green shutters clash with a fuscia facade. A blue boat bobs outside a cobalt-blue house with a blue-striped curtain and a rash of magenta petunias flowing from a window box. Get the picture?

Check rates and availability on Burano day tours from Venice

The colours, which have adorned the dwellings for hundreds of years, follow a specific system. If someone wishes to paint their home they must request permission from the local council who will advise of the colours permitted for that location.

It’s said that the custom of painting the houses in such vivid colours was started by Burano’s fishermen. This way they could identify their way home when dense fogs came in or that the fishing boats were painted to match the houses in the family colour.

Other tales tell that the colours were a celebration that the house had escaped bubonic plague. Affected houses were disinfected inside and out with quicklime leaving them chalk-white so a brightly coloured house meant a healthy house. It’s also suggested that the island may once have been an isolation hospital during cholera outbreaks – lots of theories but no-one seems to know for sure. 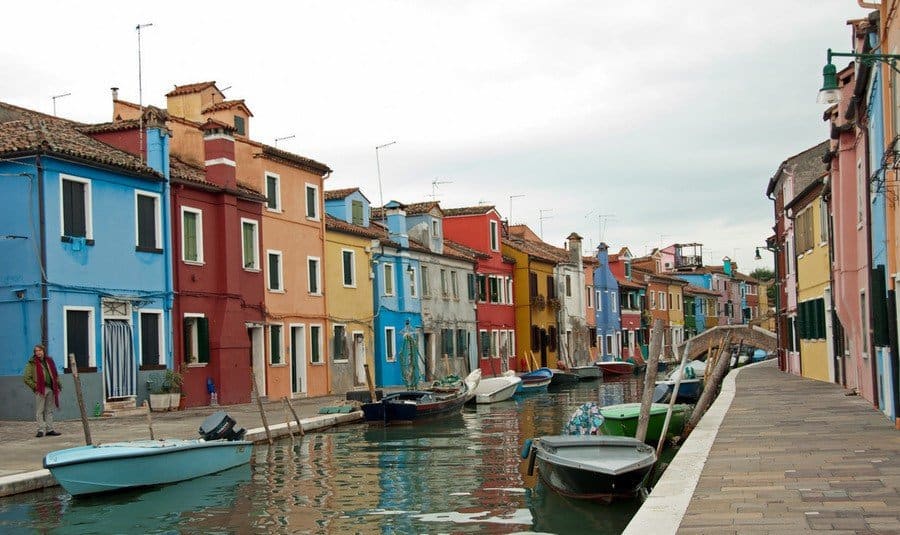 Back in the 16th century, the women of Burano started stitching lace and there are lots of lace shops dotted around. The work is extremely time consuming which is reflected in the price. There are cheaper machine-made versions but if you’d like something authentic you’ll need pay good money for it. Leonardo da Vinci once visited to shop for cloth to be used on the altar at the Duomo di Milano. There’s a lace museum on the island for those interested in the history of Burano’s lacemaking. 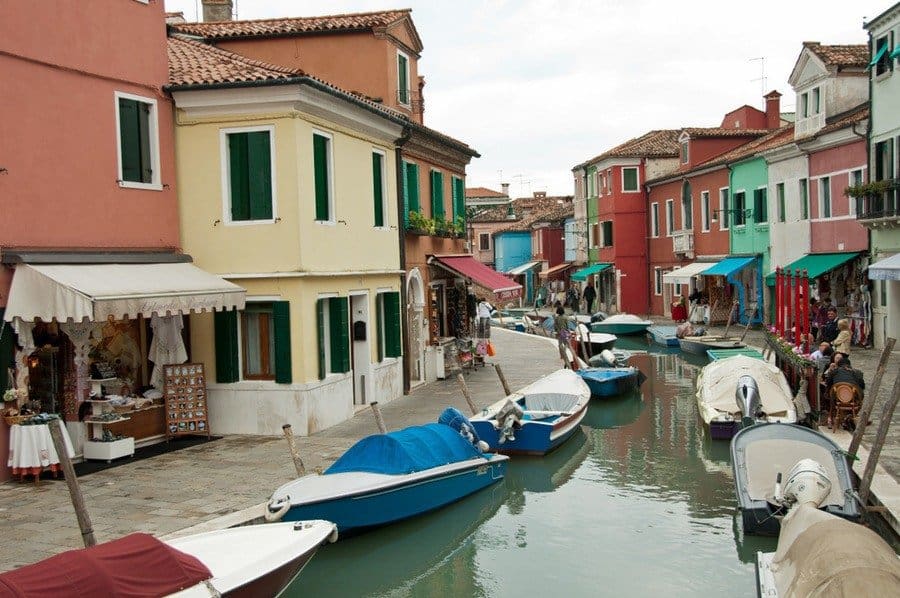 Burano even has a leaning tower, and it’s a big lean, the camponile of the 15th century San Martino Church appears to defy gravity. 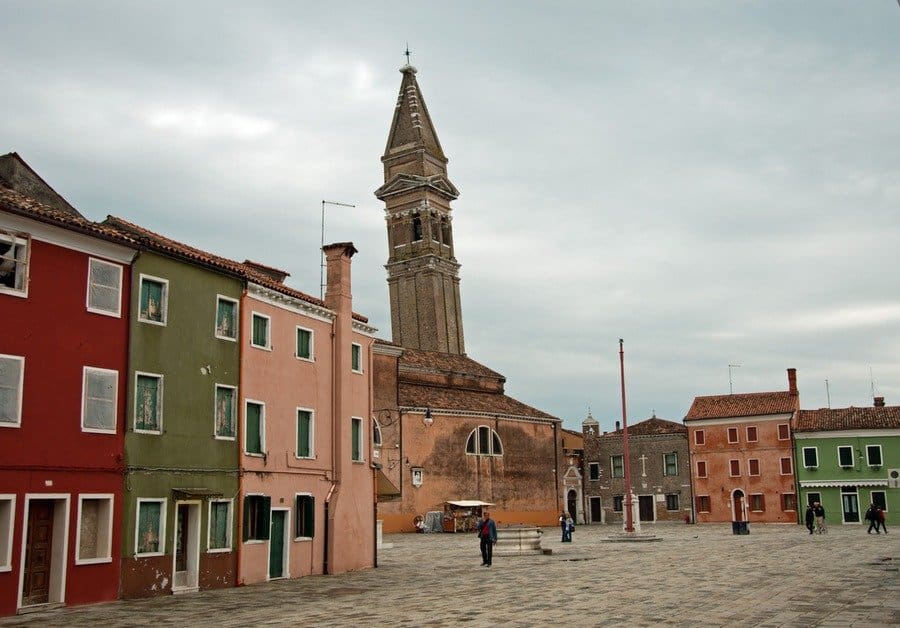 It seems that Burano has a few issues. It’s fairly isolated, 45 minutes by boat from Venice, although that means it’s also not as crowded as it could be It suffers each winter from the acqua alta, or flooding and many of Burano’s younger inhabitants are moving to the mainland for work opportunities. But the Buranelli will always look on the bright side of life because there’re a lot of pluses to living on the island too.

Check rates and availability on Burano day tours from Venice 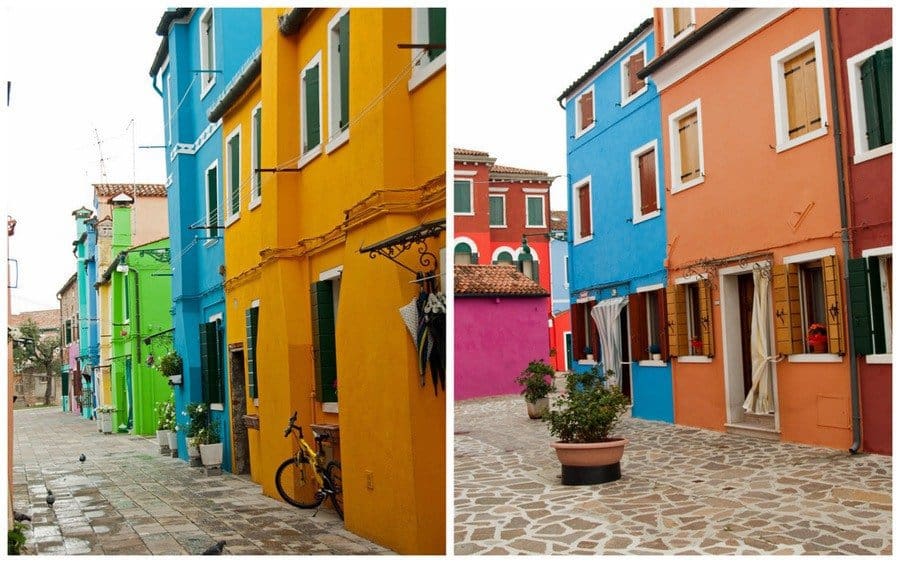 Burano is a complete contrast to the tourist-clogged canals of Venice and a world away from the stage sets of the Grand Canal, Venetian Basilicas and palaces. It’s a fishing island and a working town inhabited by local families where children play in the streets, the fishermen bring in their catch and cats peer out from small alleyways.

There’s a definite community feel to the island. Although slightly touristy there’re no big shops or crowded squares selling coffee at extortionate prices, no traffic or big city fumes and you can buy a decent lunch at a good price in the restaurants.  Burano’s colour palette has put it on the map more recently and it’s surviving but equally it’s almost as if time has stood still. 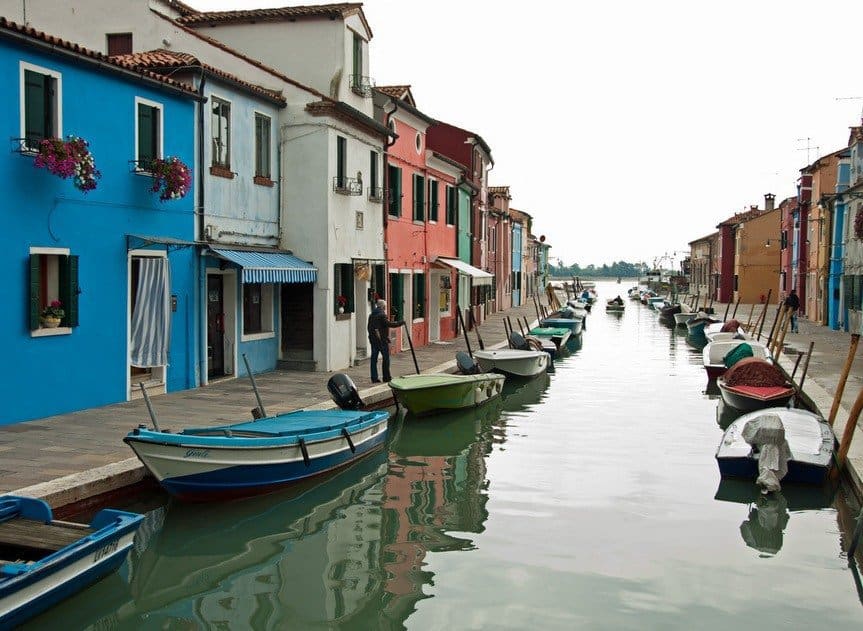 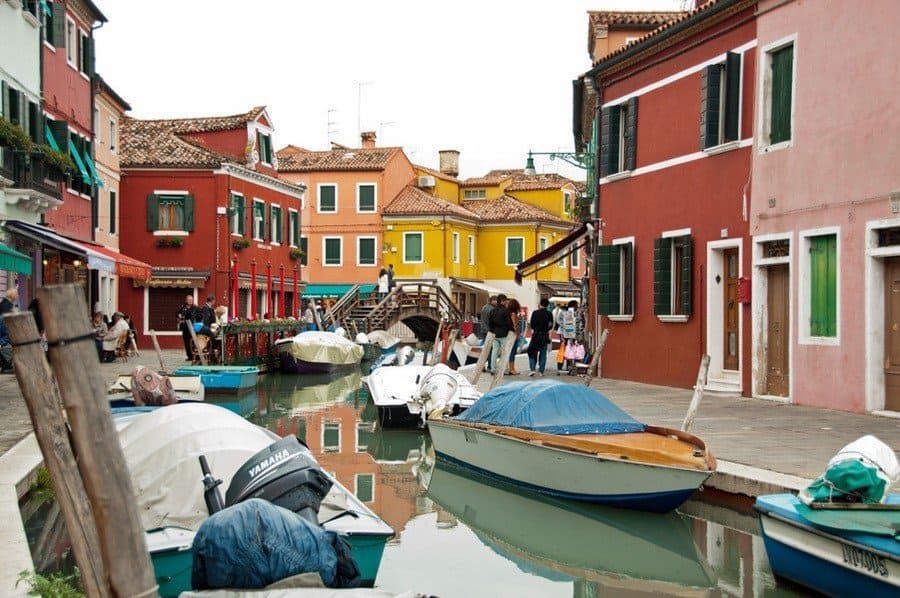 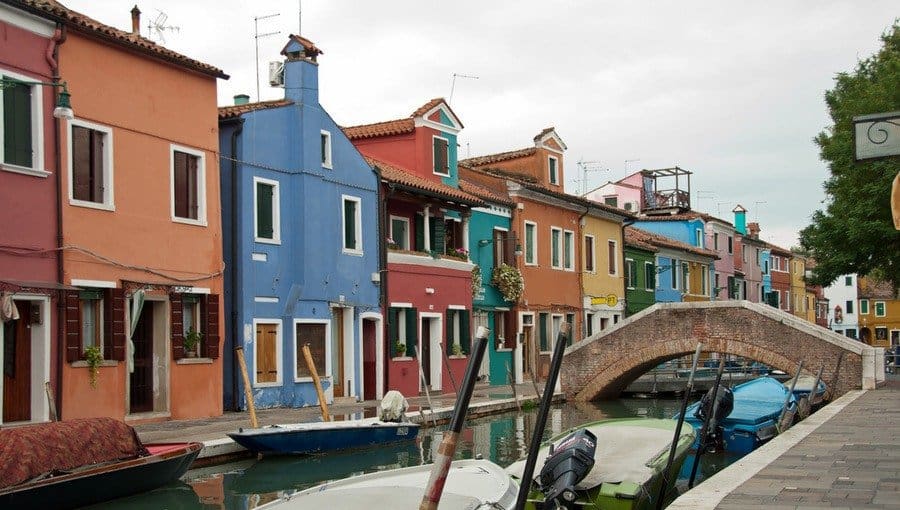 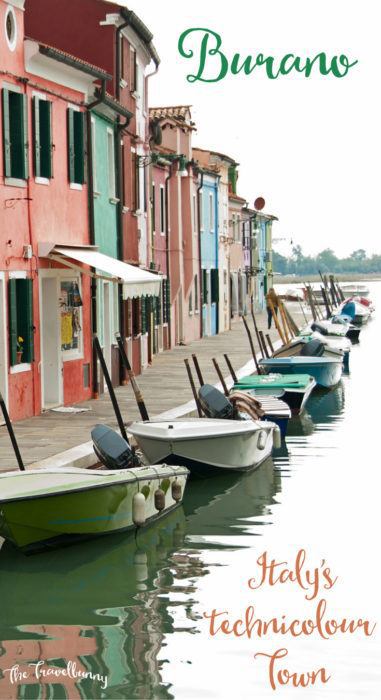 How to get to Burano from Venice

We took the only vaporetto line to the islands, the number 12 from Fondament Nove on the North side of the Cannaregio district – you can walk to it or connect from a number of other vaporetto lines.

The vaporetto departs every half hour (but not necessarily on the half hour so do check) and takes 45 minutes to make the journey to Burano. The cost is around €7 per person each way.   The Vaporetto also stops at Murano Island where you can see the centuries old tradition of Venetian decorative glass-making.

Get monthly travel inspiration straight to your inbox

What a beautiful place to visit Suzanne! I went to Venice a while ago, but I didn’t know anything about Burano then. Seeing all the beautifully colored houses and small canals, I quite regret not making it out of busy Venice to see this charming town with a much more local feel. But I will definitely make sure to remember it next time when in the area. Thanks for sharing these wonderful impressions… :)

Hi Dennis, Burano was such a pretty place to visit and a lot quieter and calmer than Venice. The restaurants were a little cheaper too!

We absolutely love Venice. But while we've visited Murano for the glass, we haven't yet visited Burano for its lace. Just another reason to go back, right?

And the colour and the fab restaurants with normal prices compared to Venice!

It would be fun to ask all of the locals why they think the houses have to be painted those bright colors. I'm sure all of them would come up with different answers since no one knows for sure. How interesting!

If I ever go back that's exactly what I'm going to do - ask a local!

So glad I came across this post (accidentally). Venice was the first place I ever visited on my own. Did a trip to Burano and had completely forgotten about its existence. Your fab pics have inspired me to try to fit in a return trip - 36 years later......

I hope you get there soon and have a fantatic trip - it's a lovely contrast to Venice.

Indeed very colourful. I will have to remember to go to Burano next time I go to Venice. Thank you for the tip. Great pictures by the way.

Thank you Otto - well worth a visit if you can tear yourself away from Venices' beautiful architecture.