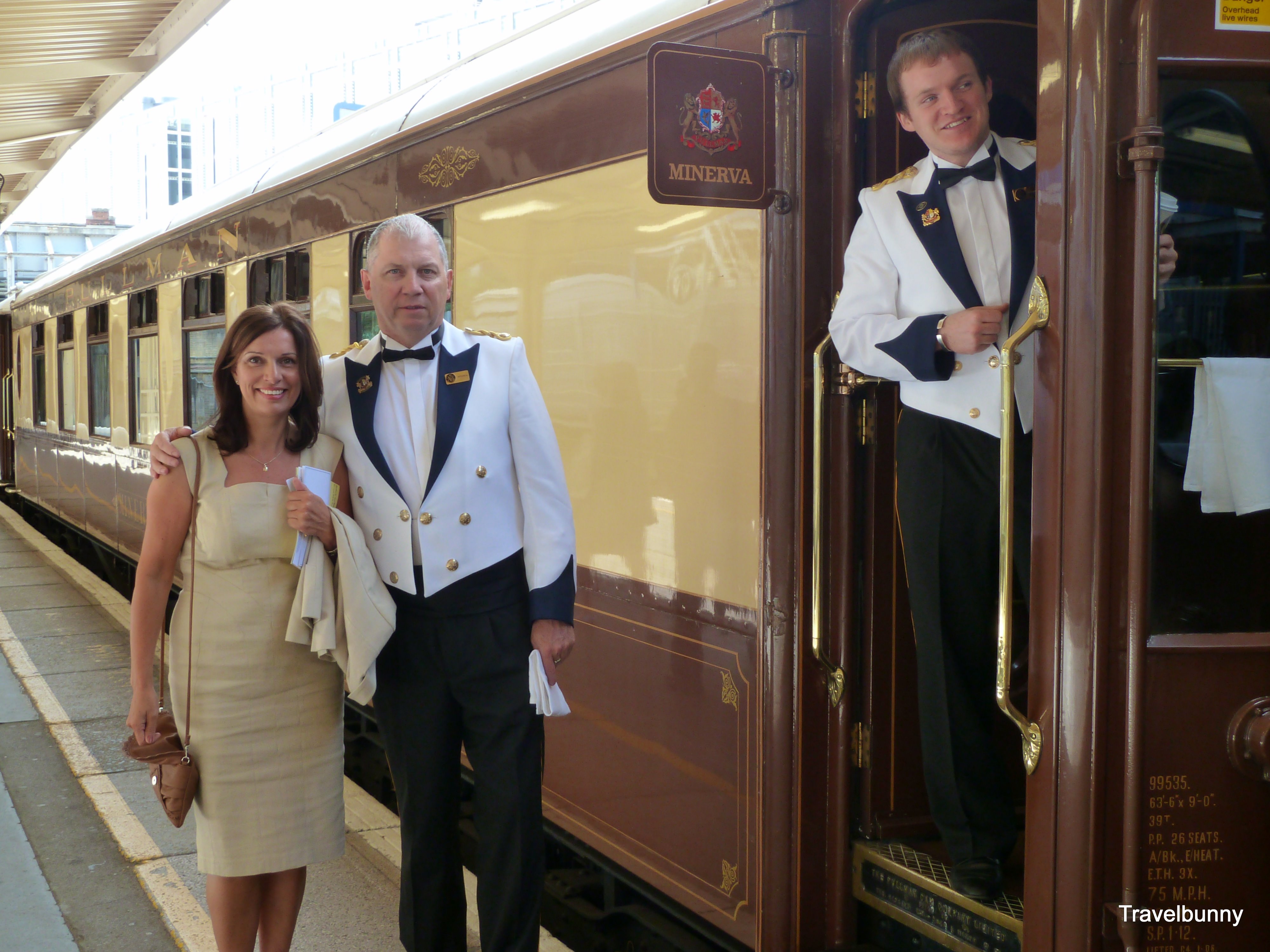 Ready to board the British Pullman

The umber and cream liveried carriages of the iconic British Pullman calmly drew into the bustle of London Victoria.  The chatter on Platform 2 grew measurably louder, a sense of anticipation filling the air as smiling stewards, in crisp white uniforms alighted and welcomed the passengers, directing them to their carriages.

A glance at my ‘Invitation to Board’, encased in a plush leather wallet, led me down the platform and almost the full length of the pristine train to ‘Zena’ our carriage for a luncheon trip through the glorious Kent countryside.   As we settled into beautifully upholstered armchairs the guard gave a shrill blast on his whistle, the British Pullman pulled away and  transported us back to a time of elegance, glamour and quiet sophistication. The crystal glasses on the immaculately set table softly clinked and the wooden interior creaked slightly as the train rolled along the tracks. As I sipped my Bellini I couldn’t help but smile – how much more genteel was this than the journey to London on Southern Rail that morning… 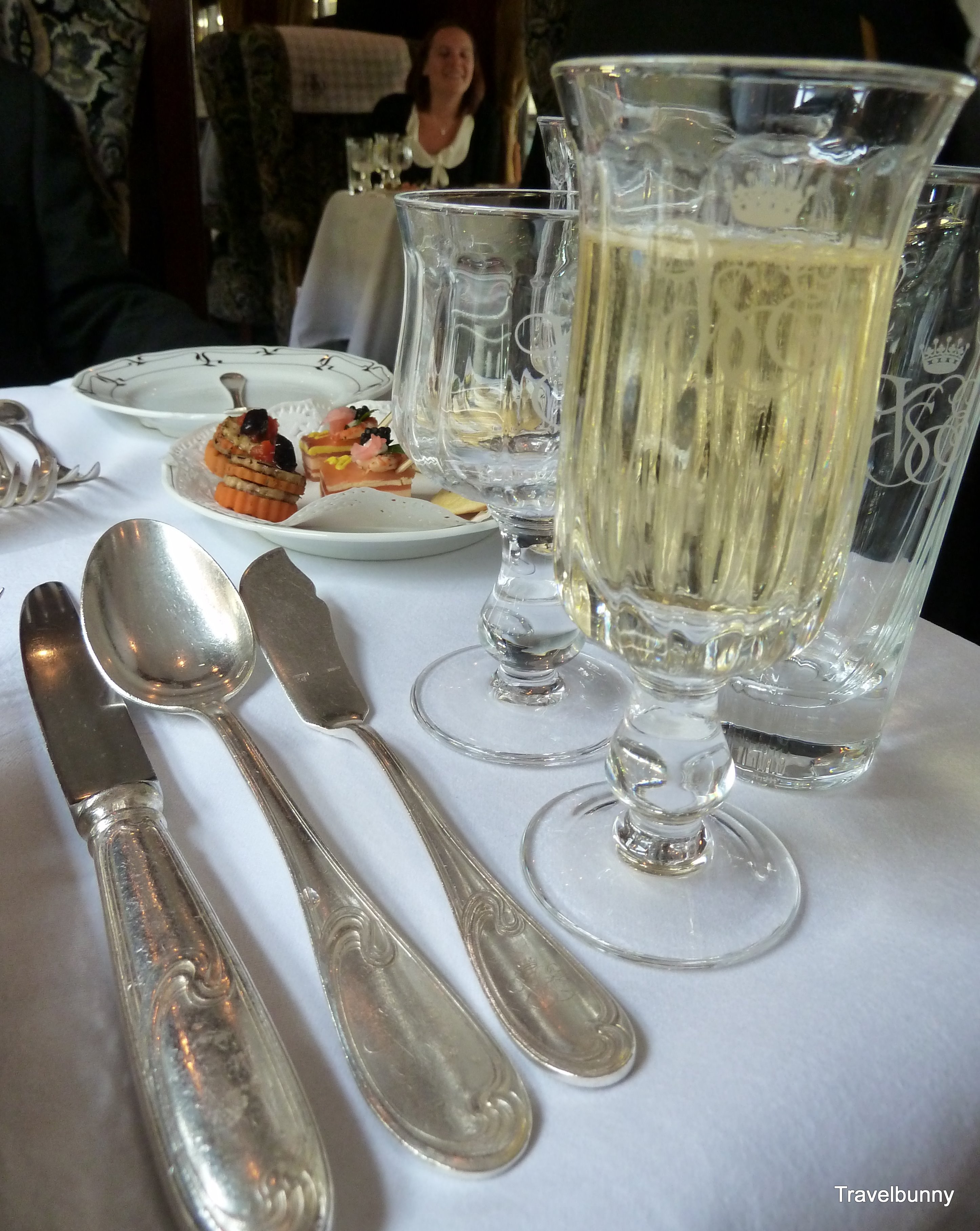 Whilst indulging in some mouth-watering canapès I became acquainted with my fellow travelling companions and took in our opulent surroundings; buffed brass luggage racks, polished, veneered surfaces with art deco marquetry and bevelled mirrors.  Softly glowing wall lamps added to the ambience whilst thick curtains framed the large windows and sumptuous armchairs immersed us into the ‘Golden Age’ of travel.  Even the china and glassware had matching insignia – if it wasn’t for the blur of the scenery whisking by I’d  hardly have believed I was on board a train.

The British Pullman, named after the American, George Mortimer Pullman, who pioneered the idea of ‘palaces on wheels’,  is the sister train to the Venice Simplon Orient Express.  Romantic carriage names; Minerva, Ione and Lucille conjure images of elegance and opulence.  Each carriage has a history and a tale to tell – Zena was no exception.  Built in 1928 she was in service in her hey-day as a first class parlour car with the Great Western Railway hosting, among others, the French President, film stars of the day and transporting well-to-do passengers to the grand ocean-going liners of the 20s and 30s.  She later rode the tracks in Yorkshire and Wales until in 1965 she was part of the final run of the Tees-Tyne Pullman before being ungraciously daubed with a large white cross, discarded and left for scrap in the sidings. Fortunately she was rescued, along with 10 other carriages from all over Britain, painstakingly restored and now graces the tracks of South East England. 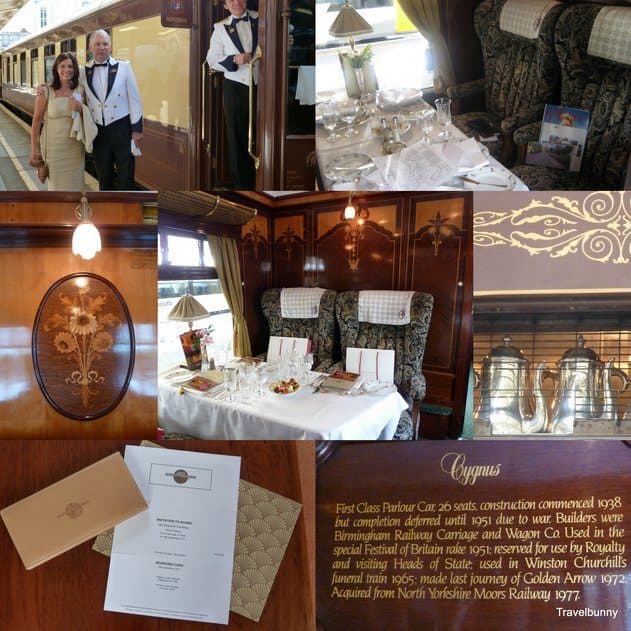 Meals on the move
A five-course meal prepared for 240 guests in two bijou kitchens is no mean feat and yet a feast of scrumptious British food was deftly served, delicious and piping-hot.  First course, was a light terrine of wild river trout and green peppercorn with watercress mayonnaise, delivered immaculately in silver-service style by our charming steward.  From a choice of wines we opted for the Gavi La Battistina which complemented the summer menu beautifully.  Second course arrived; roasted courgette soup with a Stilton crème fraîche.  Yes, I know, soup.  Now the stewards have a hard enough time serving food that doesn’t move around so it was hats off to our chap who had the balance of a tightrope walker in a force 7 gale.  Despite the rolling motion of the carriage not a drop did he spill.  Impressive. 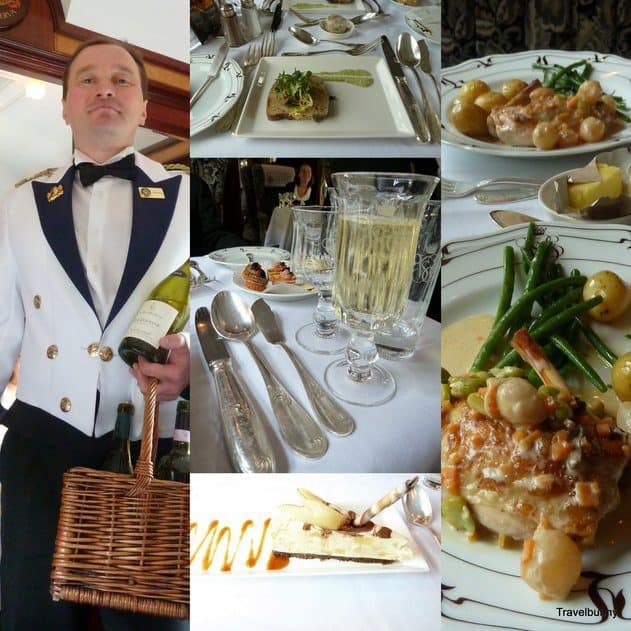 Main course was succulent breast of chicken with mushroom duxelle accompanied by a tasty broad bean and morel mushroom sauce, parsley potatoes and fine green beans – al dentè of course and thoroughly enjoyed at a leisurely pace. After a suitable pause the Great British Cheeseboard arrived consisting of five British favourites with a tangy home-made chutney. By now I needed a bit of a breather before the arrival of pudding and took myself off, camera in hand, to explore… 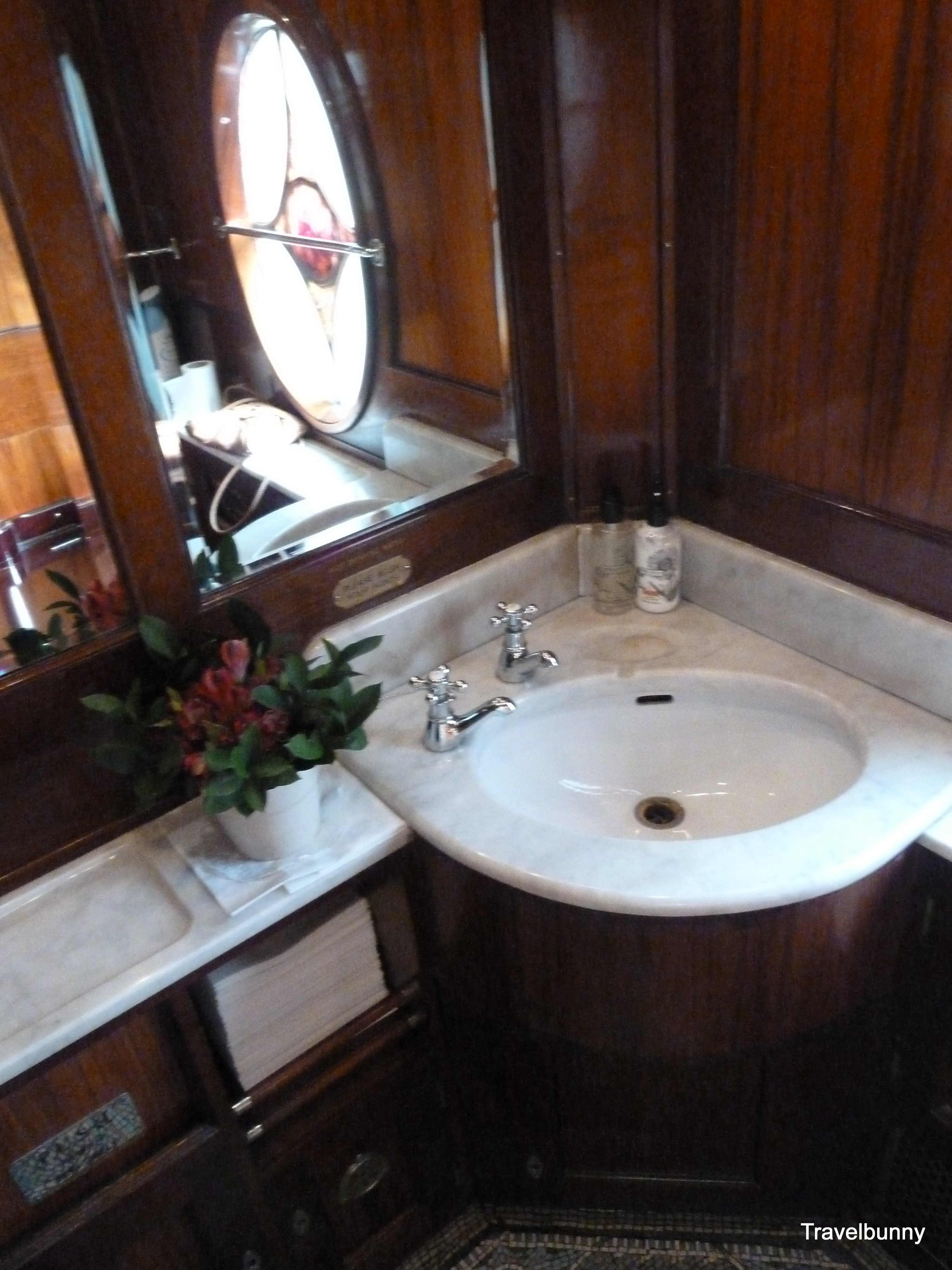 The detail throughout the train is exquisite; not an inch of brass goes unpolished nor mahogony unburnished.  Even the lavatories – the word toilets just wouldn’t do here – were a revelation.  An intricate mosaic adorned the floor, whilst marble tops, polished wood and flowers all added to the ambience.

As I ventured through the other carriages; Ibis, Cygnus, Perseus and Phoenix I noticed wooden plaques displaying the fascinating history of the carriages.  Each coach is slightly different in style but restored with great skill to showcase its unique character.

At Whitstable the train came to a halt and we were able to sample fresh oysters, just in case we were still hungry, and to stretch our legs accompanied by a lively jazz band which played on the platform.  It was lovely to see  people dressed in period costume which gave me a feeling of having stepped back in time.  Everyone had made an effort of course – no jeans or trainers permitted on this train.

I headed back to my carriage for the final leg of our journey and, of course, pudding – a dream of English pear cheesecake with chocolate crust and butterscotch sauce followed by fresh coffee.  And before long the lush green countryside flashing by was replaced by the hum of suburbia and then by high-rise blocks and the bustle of the city.  Time had flown – but then doesn’t it always when you’re having a perfect day. 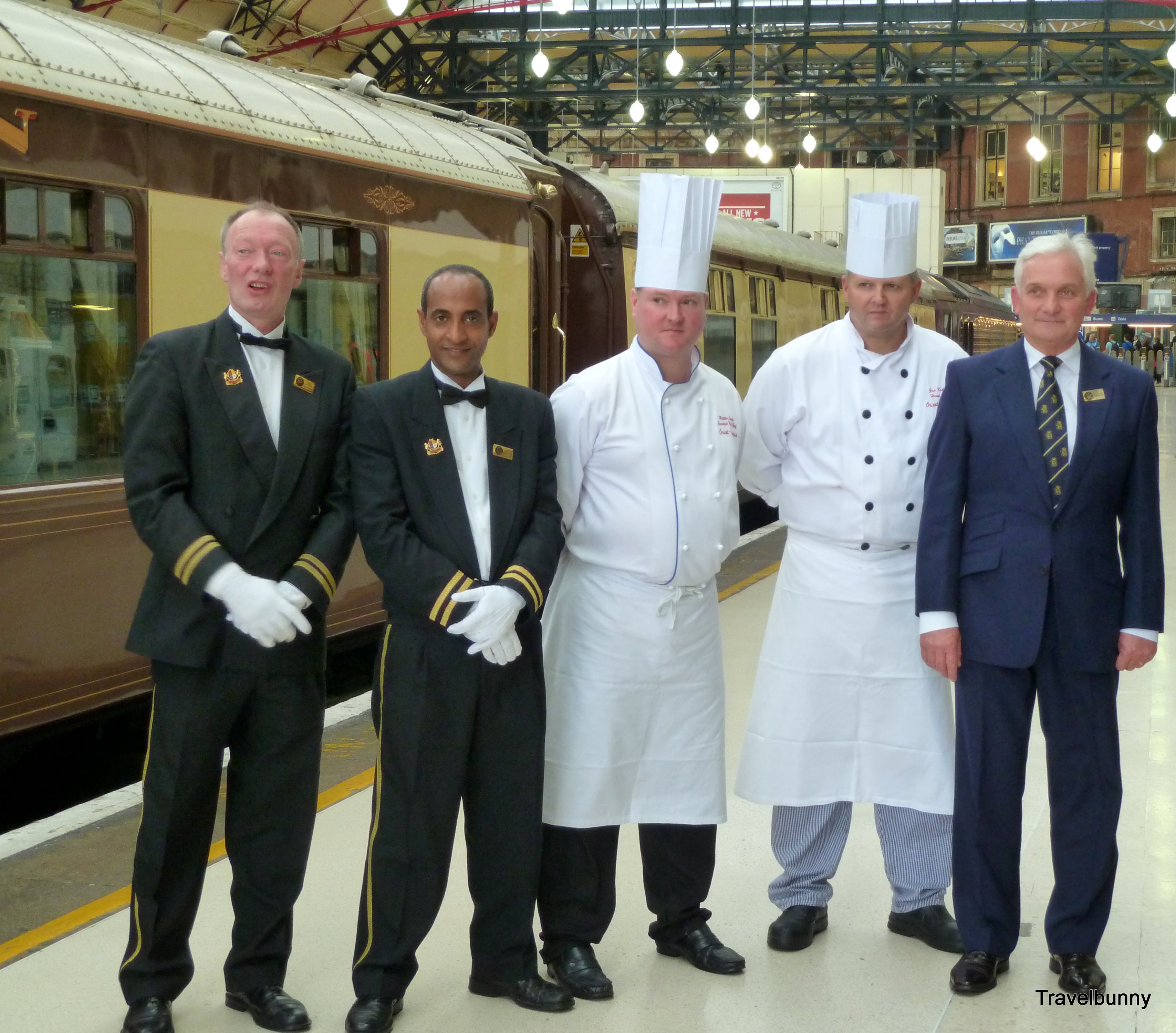 Some of the British Pullman Team

British Pullman has a varied time-table of day trips all over the country and to various sporting events such as Goodwood and Ascot.  You can find out more about Orient Express British Pullman here

Many thanks to hosts Melia Hotels International and Orient Express

Love to do that, sounds wonderful

Lovely piece Suzanne. I was rattling genteely along the tracks with you. Wouldn't mind a loo like that myself!

A fantastic description of what was obviously a fantastic day - am very jealous. It seems so wrong that these carriages were marked for the scrap heap and I am so pleased some of them were saved, restored and now used to their full potential.

It was a wonderful day and a remarkable advocate for recycling! So glad that nowadays we appreciate the value of a time gone by and thanks to those that had the foresight to restore these amazing artefacts...