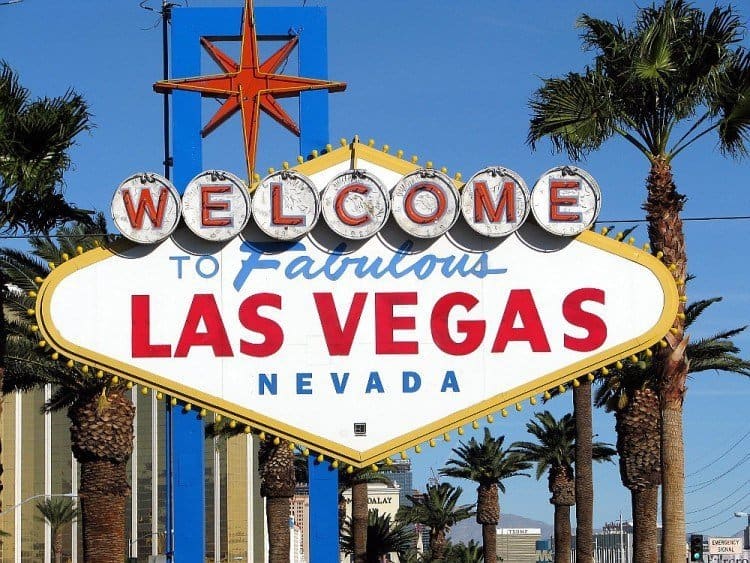 Nowadays Las Vegas hotels are their own advertisements; the skyline and roller-coaster of New York New York, the dancing fountains of the Bellagio and the sleek curve of The Wynn do the enticing that the neon signs used to. But what happened to the iconic Vegas signs that once graced the buildings and boulevards of Sin City? Well, they’ve re-grouped and are gathered in all their paint-peeling, broken-bulb, glory at the Neon Museum of Las Vegas. 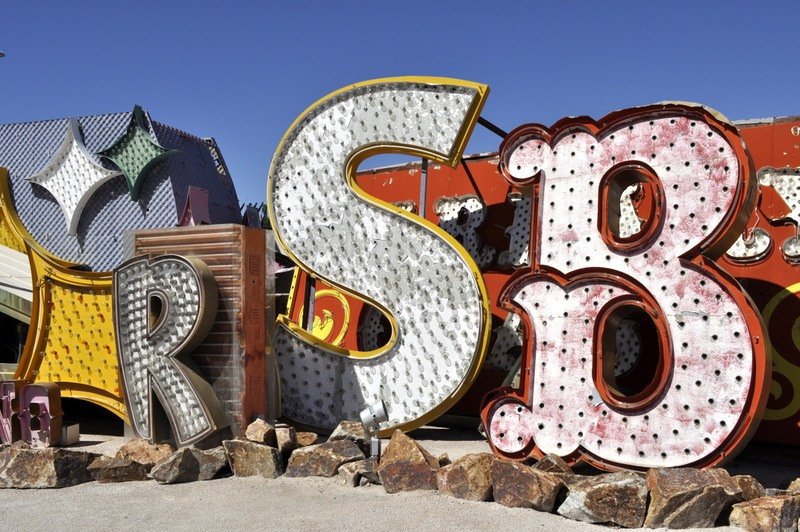 The Neon Museum, a non-profit making organisation, is retirement home to over 150 of the kitschiest, iconic neons from the 1930s to present day and like all relics they have a story to tell. Even the visitor centre is a piece of history; in a previous life it was the space-aged shaped La Concha Motel lobby built in 1961 in the Googie style of architecture. It was saved from demolition and moved to the current site in 2006 and became the gateway to the ‘boneyard’  an outdoor storage lot where the lost and forgotten neon signs of Vegas languish in the coolest of curated collections. 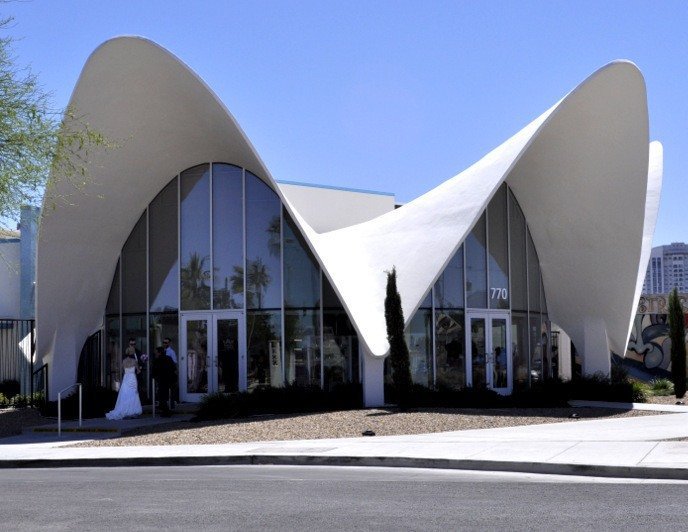 We were shown around the boneyard by Carrie, our guide, on a one hour tour. Not only do you get to see the bleached out, rusting signs and fallen letters up close but you’ll get a mini history of Vegas as you go.  Tales of the Rat Pack and the Mob, hotel history, casino kings and how Vegas bloomed in the desert and grew into the city it is today. So, come take a stroll with me through the Boneyard… 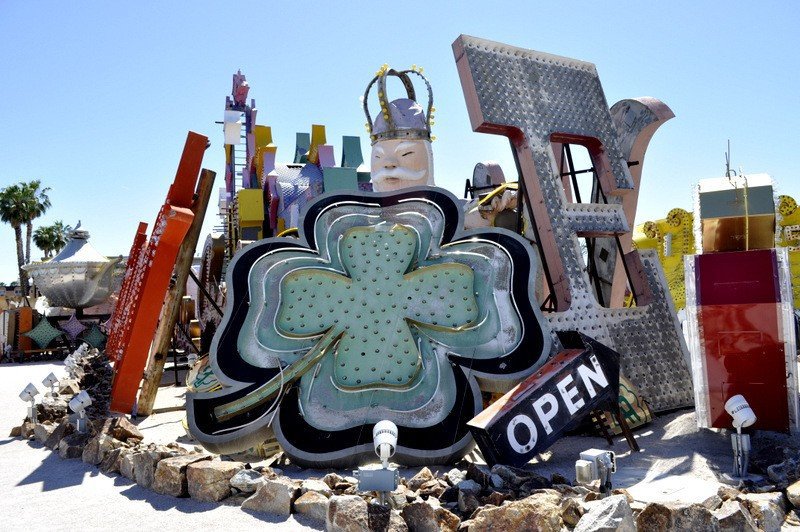 The Stardust Hotel sign was a symbol of the city back in the ’60s. It was visible for 60 miles which isn’t surprising seeing as there were 975 bulbs in the “S” alone.  Stardust held the accolade for tallest neon sign – every time a new taller neon came on the scene they just added another star and topped it. 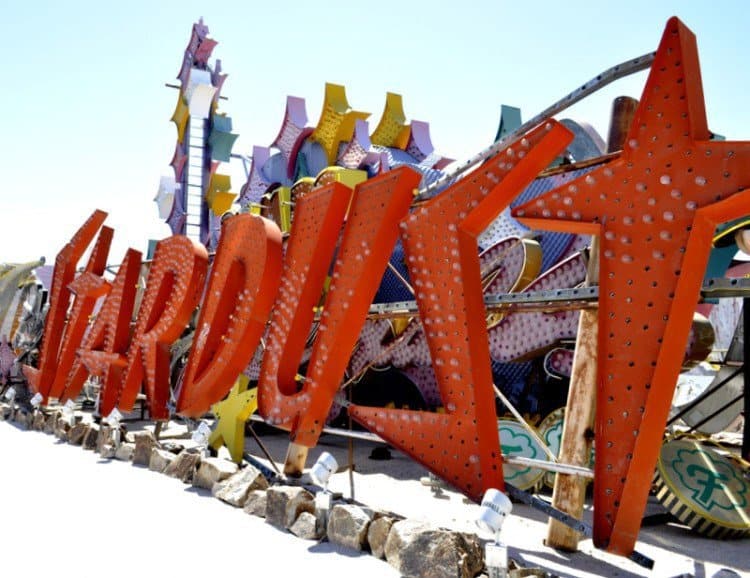 The Sahara Hotel which closed in 2011 was a rat pack favourite and saw Frank Sinatra, Dean Martin, Sammy Davis Jr, and Judy Garland pass through its doors. The building is now the luxury SLS Las Vegas hotel which opened last year. 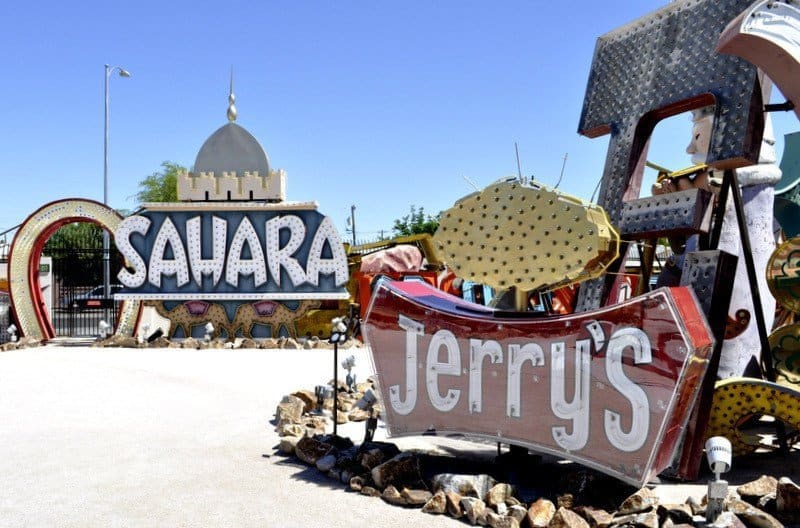 The pool player who cued up on the roof of Doc ‘N’ Eddy’s Pool Hall. 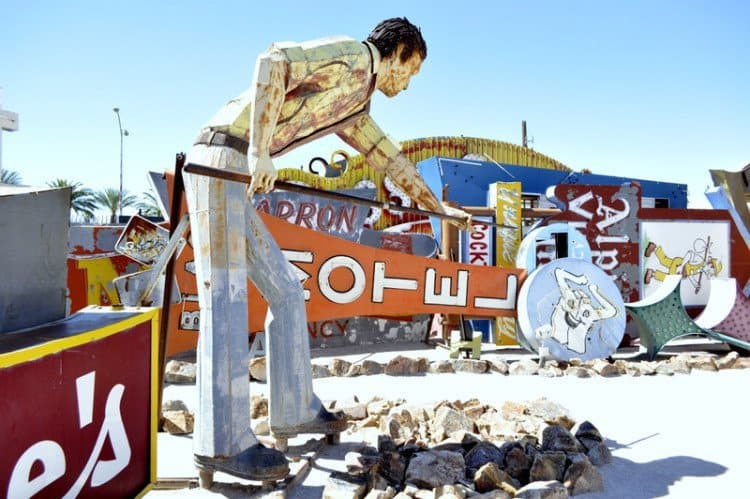 “Wedding Information” – Vegas is the USA elopement and quickie divorce, capital – this sign would have pointed you in the right direction. 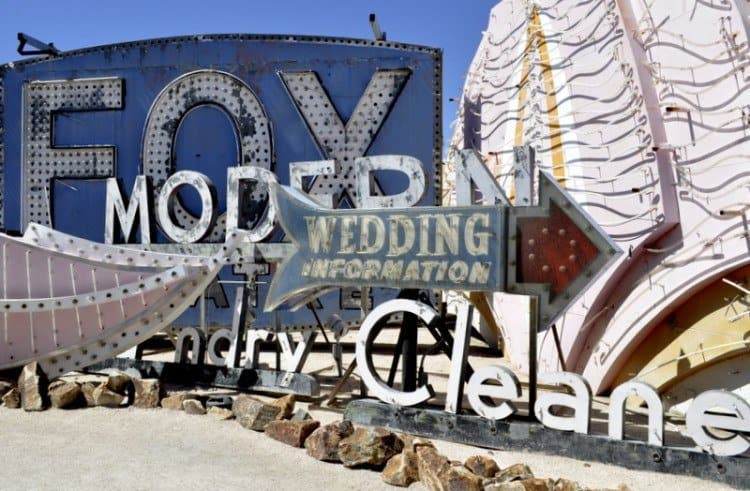 When you’re done in the Boneyard take a stroll down Las Vegas Boulevard and see eight classic signs which have been restored and are part of the museum’s Urban Gallery (The Las Vegas Boulevard Signs Project) one of only three Urban National Scenic Byways in the US. Binion’s horseshoe, The Silver Slipper, The Hacienda Horse and Rider and 5th Street Liquor Store amongst them. You can find the route here.

The Silver Slipper was designed by Jack Larson and built by Young Electric Sign Company (Yesco) around 1950.  It stood in the grounds of the Last Frontier on Las Vegas Boulevard on the Silver Slipper Gambling Hall. 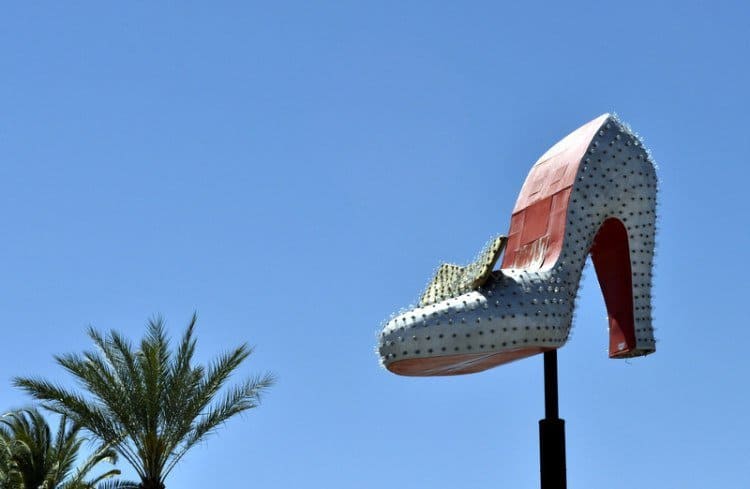 The Hacienda Horse and Rider can be found by the entrance to the Fremont Street Experience where there’s a whole street dedicated to an evening light show with a roof canopy featuring 12.5 million lights and 550,000 watts of sound. 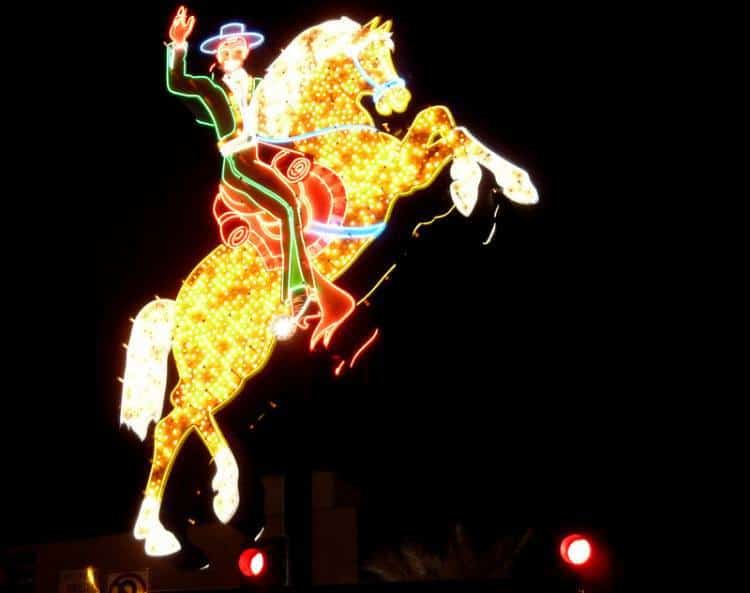 The sign for the Neon Museum itself is made up of different fonts and typography from some of the most famous neons. The word neon is made up of the ‘N’ from The Golden Nugget, the ‘E’ is from Ceasar’s Palace, ‘O’ is from Binion’s Horseshoe and the final ‘N’ celebrates the Desert Inn.  Many of these signs can be found in the Boneyard. 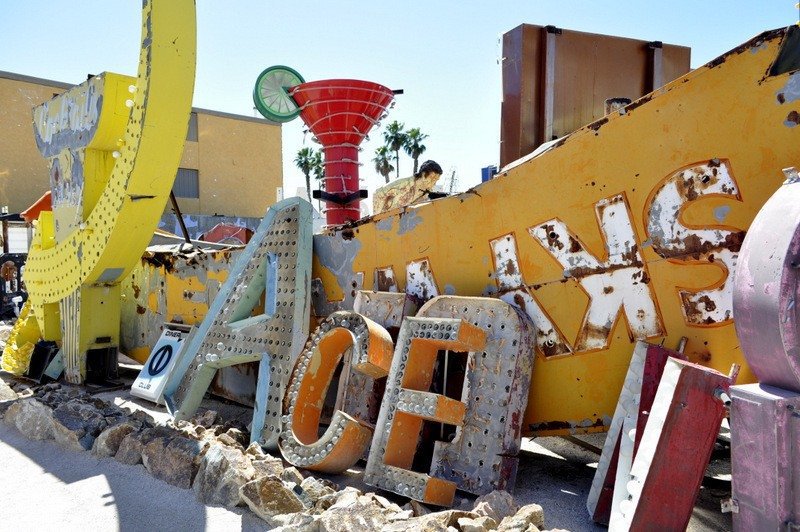 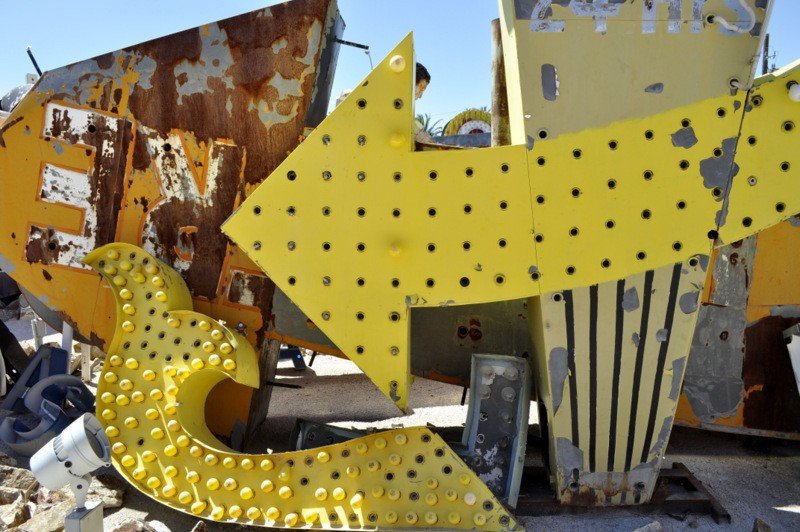 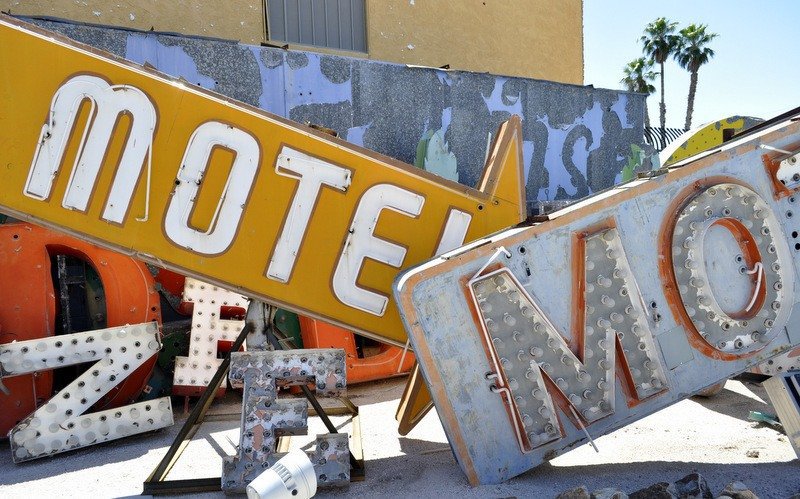 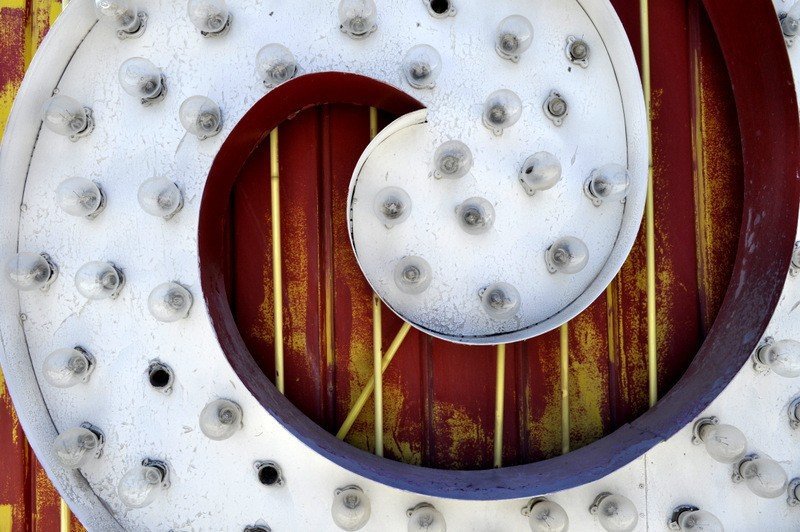 The Neon Museum Boneyard is only available to the public through one of their hour-long guided tours.  It’s an outdoor collection and was very hot while we were there – there’s no shade so take a hat, water and sunblock. More information and on-line booking here

Tours are available seven days a week and tour times vary based on the season. 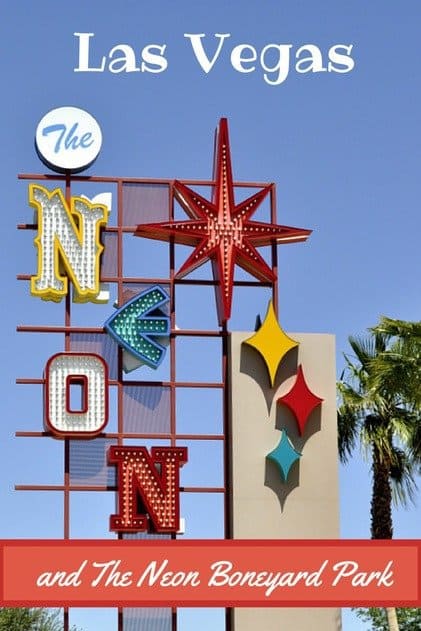 Just a note – we paid full price for our entry into the Neon Museum and loved it. If you’re visiting Las Vegas it’s a ‘must do’.