Valencian food guide – what to eat and drink in Valencia

Valencia, the birthplace of traditional paella, is no stranger to culinary fame. Spain’s third largest city is a magnet for foodies and in recent years has established itself as a city of culinary innovation and renowned chefs. We couldn’t wait to get stuck into some typical Valencian food when we visited last year. 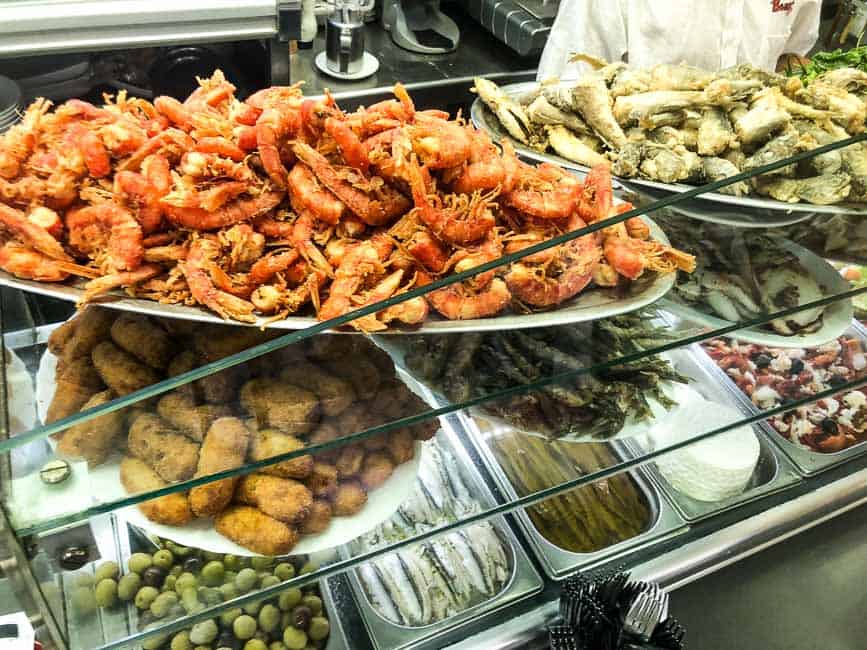 Traditional Valencian food – what to eat and where

The Valencian food scene was a huge draw and one of the main reasons for our visit. We looked forward to sampling the Spanish tapas, Paella and horchata and the bars and cafes in the old town, locals restaurants and the mercado bursting with traditional Valencian food. As soon as we set foot in the city we know we should’ve booked a longer trip.

So, what do they eat in Valencia? Read on for the ultimate guide to Valencian cuisine from Lara, a Valencian local, who runs Sea Saffron food tours in the city.

What food is Valencia famous for?

A trip to Valencia isn’t complete without trying a traditional Valencian paella. The city is where the famous Spanish dish was actually invented so to sample Paella is a must do.

Paella is made with rice grown in Albufera, a region just outside of the city and home to the largest freshwater lagoon in Spain. This means Valencia is one of the best places in Spain to enjoy rice dishes. Although paella takes on many forms around the world, the original, and most traditional recipe, is that of Paella Valenciana. 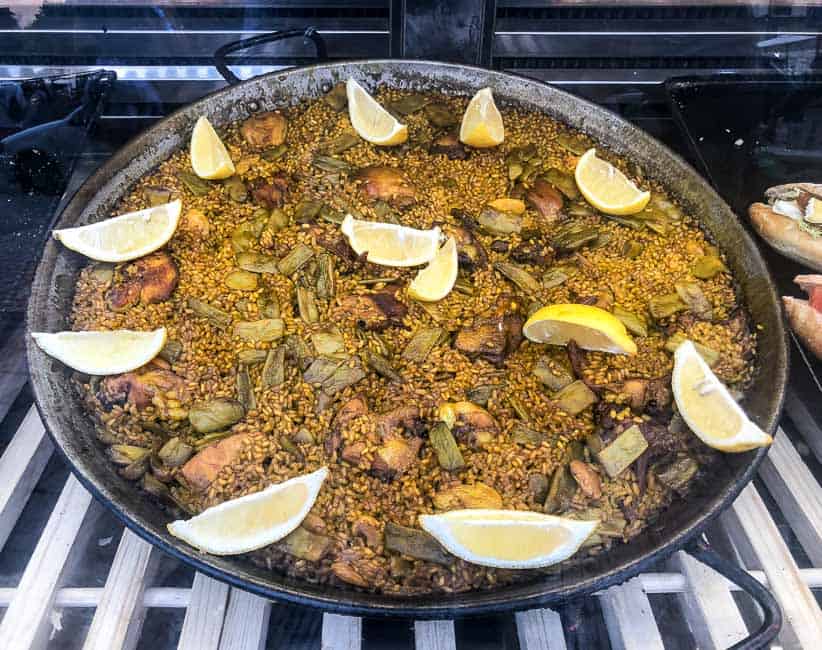 The rice in paella is flavoured with saffron and rosemary and combined with chicken, rabbit, green beans and garrófo (butter beans). There’s a misconception that paella is made with seafood like mussels and prawns but this isn’t the original Valencian-style paella. Sampling authentic local dishes when travelling is one of the best ways to immerse yourself in the local culture. Traditional Valencian restaurants still serve this dish with snails. The dish is called Paella because that’s the name of the large, shallow pan it’s cooked in.

Where to eat Paella in Valencia

There are many wonderful places to try paella by the beachfront of Playa Malvarrosa and Playa Patacona although some can be a bit touristy. For an authentic experience, Borja Azcutia is recommended. This restaurant is a locals’ favourite. Sunday lunchtime paella is very popular so it’s wise to book first.

The dish is rather large and a 2-person portion is often the minimum order requirement. Paella is traditionally a lunch dish but due to tourist demand you may find it on the dinner menu in some places. It’s a bit like ordering a cappuccino in Italy after dinner – you’ll get some strange looks. Many Valencians don’t eat rice in the evening.

Horchata and fartons are traditional Valencian foods. The Horchata is a drink made with chufas (tiger nuts). These nuts are grown in fields surrounding the city and Valencia has 90% of the world’s production. The drink is sweet, refreshing and nutty. The most typical way to enjoy horchata is alongside a farton – a long sponge finger dusted with icing sugar. Eat it by dipping it into the horchata and letting it soak up the liquid. 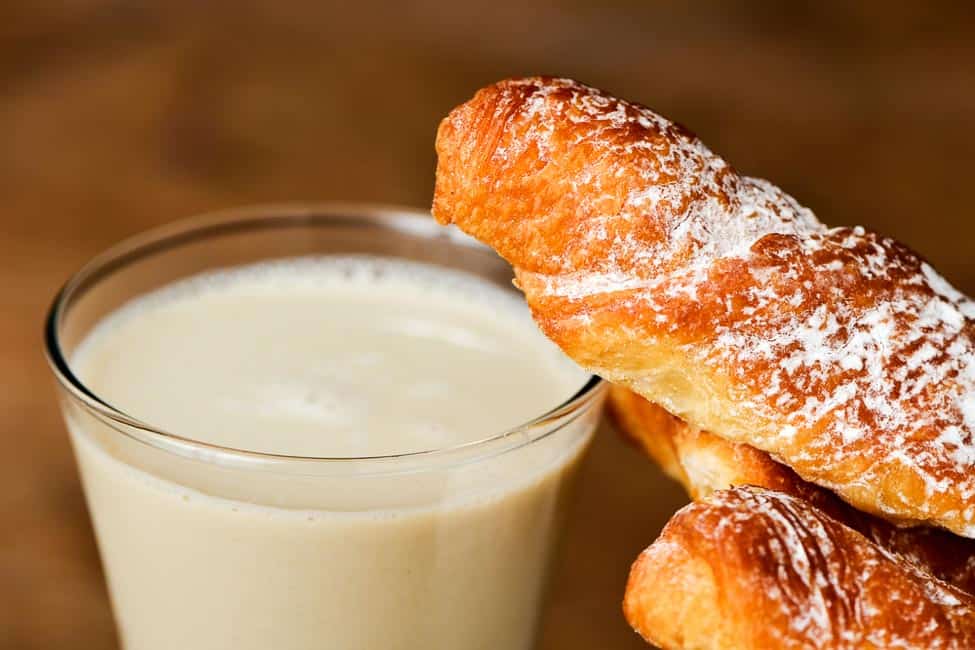 Horchata and fartons in Valencia

Where to order horchata and fartons in Valencia

The most typical place to try horchata and farton is Horchatería Daniel. The family hails from the small town of Alboraya, home of the chufa fields. Another iconic establishment is Horchatería Santa Catalina. The interiors are decorated with beautiful Spanish tiles from the town of Manises which is near to Valencia. You’ll find queues heading up the street for Santa Catalina but it’s worth the wait. 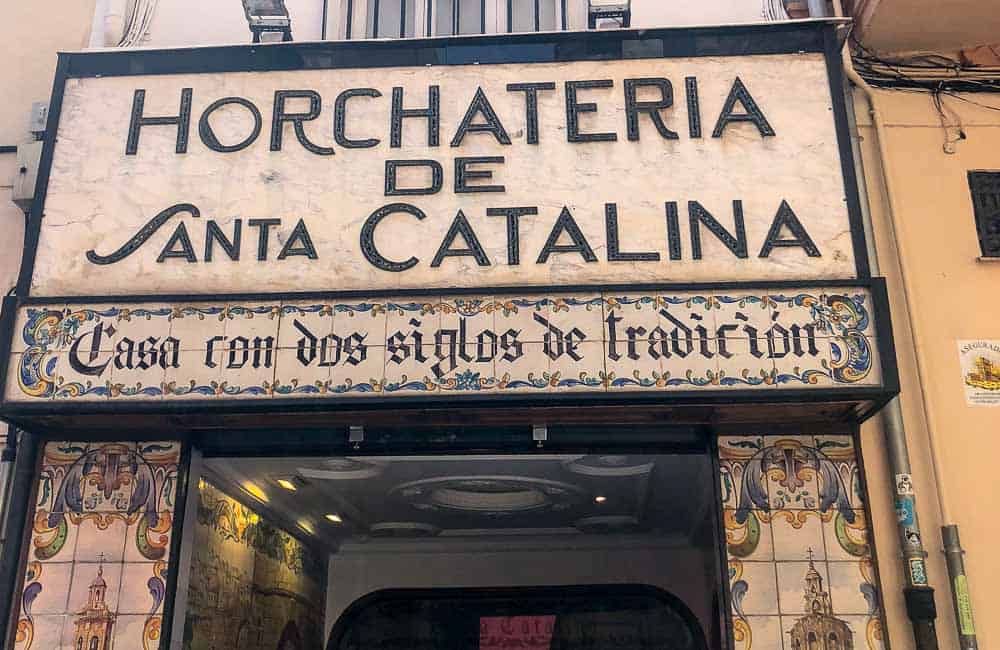 Valencia is also famous for oranges. The city is adorned with orange trees loaded with sweet-smelling blossom or loaded with plump, juicy oranges. Freshly squeezed orange juice is readily available in every bar or cafe.

One of the most enjoyable ways to drink this is in Agua de Valencia. This deliciously lethal cocktail is a combination of freshly squeezed orange juice, vodka, gin and cava! Try this cocktail in Cafe de las Horas, a bar known as much for its quirky interiors as its carafes of Agua de Valencia!

As well as the classic Paella, there are many other rice dishes enjoyed in Valencia. This is due to its proximity to Albufera the rice-growing region. A favourite dish is Arroz al horno or literally ‘rice in the oven’. This dish incorporates many tasty ingredients but is largely meat-based. You’ll find chickpeas, potatoes, tomatoes, garlic, morcilla (black sausage), chorizo and rib meat. Arroz al horno is such a part of the Valencian culture that Xativa, a local town, hosts an annual Arroz al horno festival.

Valencia is a coastal city so fish and seafood is fresh and plentiful. Fideuà is a seafood dish based around noodles, rather than rice. The word itself comes from the Valencian “fideuada”, which literally means lots of noodles. Perfect if you fancy a change from rice. Its key ingredients are different types of white seafood. Typically, monkfish, cuttlefish, and squid. There are shrimps and crayfish too. It’s all cooked in a fish stock and seasoned very simply with lemon. The perfect dish to go with a Mediterranean sea view. 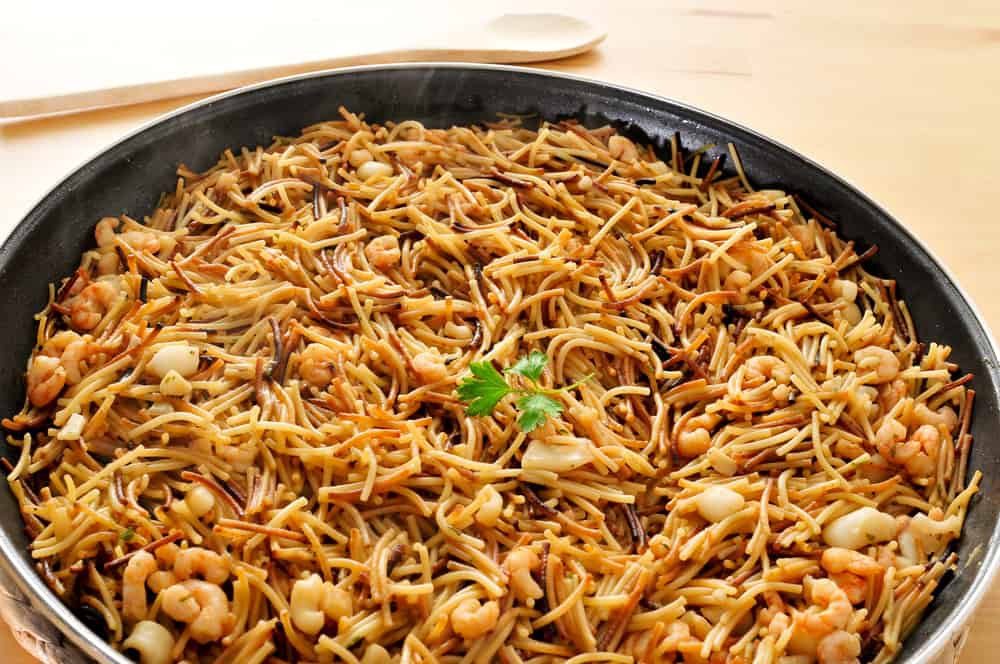 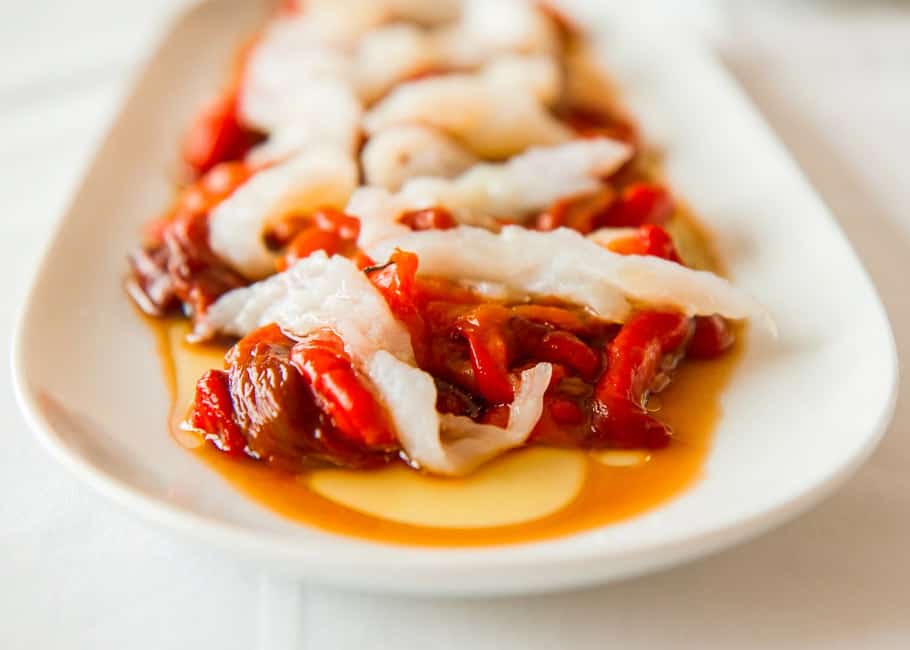 Esgarraet is a Valencian word meaning ‘tearing’. It refers to the tearing of the red bell peppers and bacalao which is salted, (salazones) cured fish.The fish, often cod, is marinated with olive oil and layered with strips of red pepper and garlic. The dish is a delicious blend of the sweetness of the peppers combined with the salty flavour of the cod. Soak up the juices and olive oil with hunks of freshly baked bread.

So, now that you’ve been tempted with some traditional Valencian foods, it’d be rude not to let you know where to eat them. 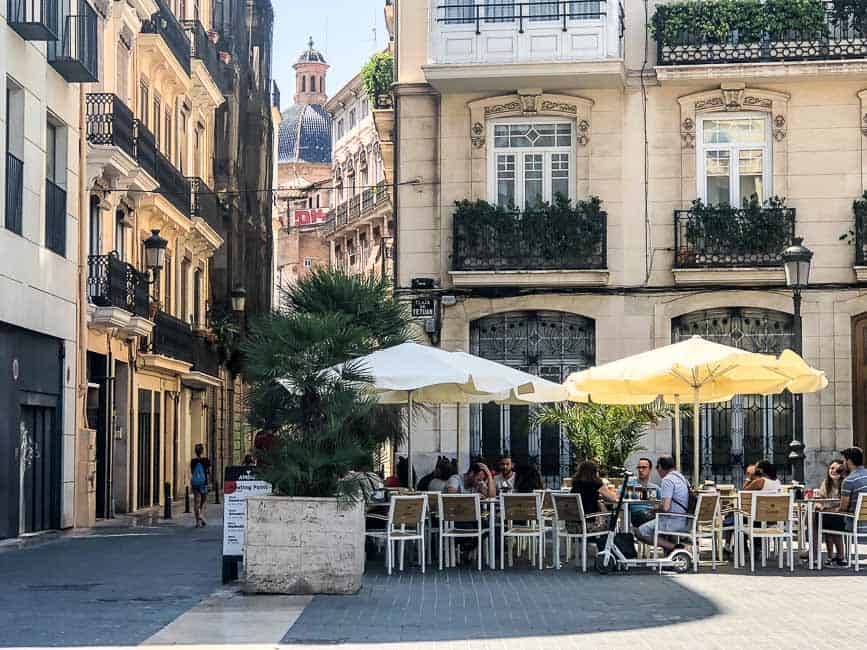 Valencian-born Michelin-star chef Ricard Camarena is one of the pioneers in Valencia’s gastronomic scene. As well as his Michelin-starred restaurant, he is also behind Central Bar, an atmospheric informal tapas bar, situated in the heart of Mercado Central.

He also runs Canalla Bistro, located in the trendy district of Ruzafa. Canalla Bistro is the perfect way to experience how Valencia’s gastronomy has grown and changed. Camarena uses local ingredients and inspiration from international street food to create a fusion menu. 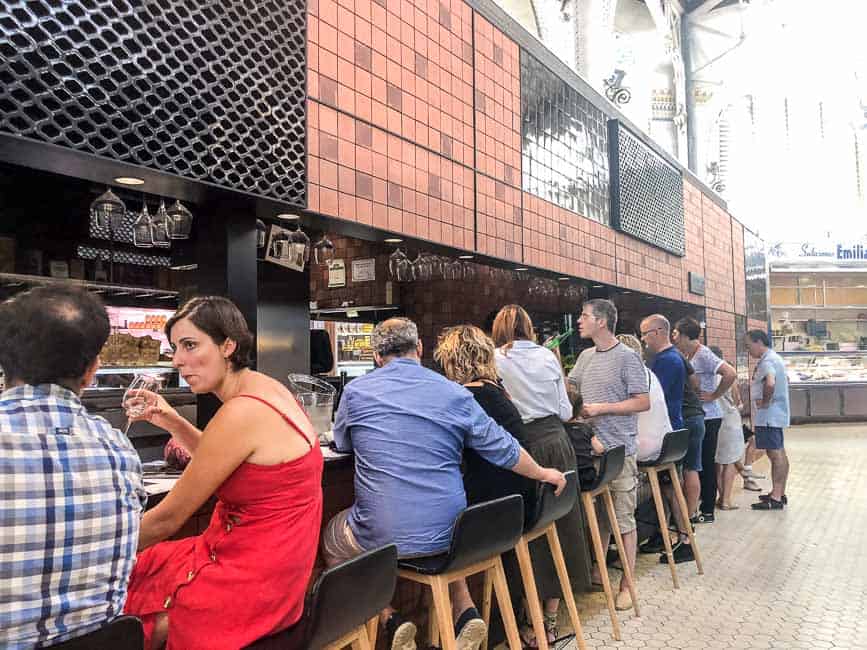 Other restaurants should be on your Valencia itinerary because of the quality alone. For meat lovers, the beef at Gran Azul and the steak tartare at Askua are unmissable.

If it’s a fish dish you’re looking for, a top recommendation would be the lubina al sal (salted sea bass) at Bocamada. This is one of my favourite dishes and I seek it out on every Spanish trip. The fish in baked in salt and the waiter will bring it to your table, crack open the salt and prepare your fish and serve it to you. The salt crust means it’s incredibly moist and the flavour’s sealed in.

Valencia is a former fishing town and sea bass is still one of the most representative fish of the region. If you prefer shellfish, try the seafood at Civera. Their crab and lobster dishes are exceptional. 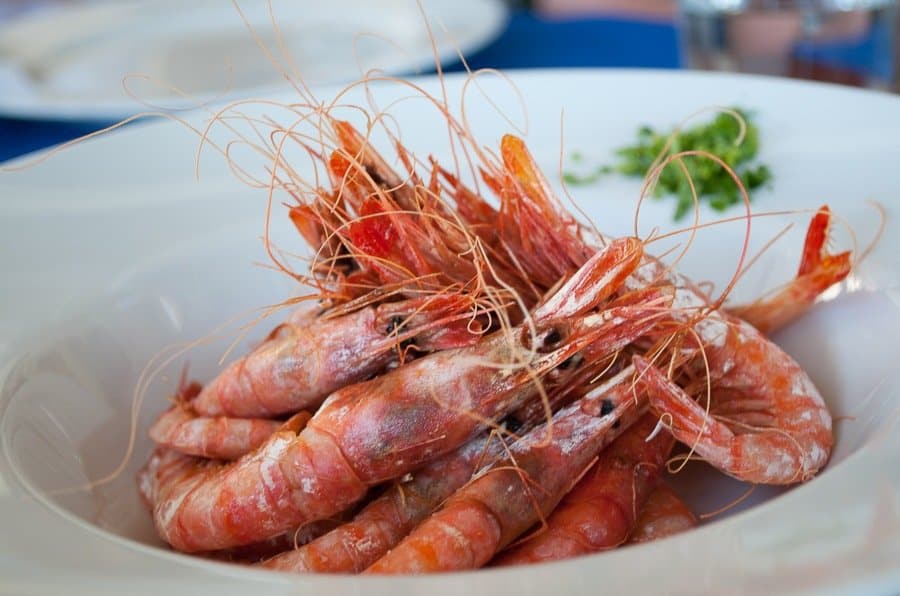 If you’re spending just a couple of days in a city make sure to book up a food tour. It’s one of the best ways to try a good variety of Valencian foods in a short time. You’ll usually find some hidden gems too. Book your food tour early on in your stay so you can go back and eat at your favourite spots later. For an immersive foodie experience in Valencia, look no further than Sea Saffron.

For lovers of history and culture, discover the hidden gems of Old Town Valencia. Explore the key landmarks of Valencia’s historic quarter, including Mercado Central, Plaza de la Virgen and the spectacular frescoes of Iglesía San Nicolas (the Sistine Chapel of Valencia). You’ll learn about the city’s colorful history as you cross through many different architectural styles, dating back to 1238. 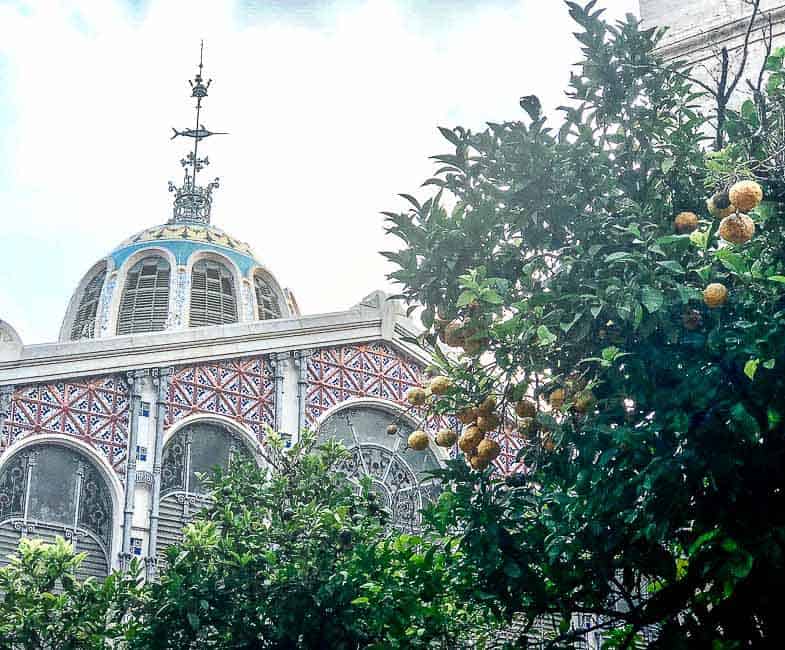 The Mercato in Valencia

The dining venue is nestled in the heart of the city’s winding side streets. You’ll enjoy a taste of Valencia in a stunning interior patio built into the original walls of the city. In this eleventh century venue, Sea Saffron shares a 10-course tasting menu paired with favorite regional wines.

City of Arts and Sciences Tour

If you’d prefer a modern outlook with exceptional views then see the city from above at Valencia’s highest rooftop. Discover the architectural masterpiece of the City of Arts and Sciences, the futuristic complex designed by Santiago Calatrava.

The tour takes you to the highest viewpoint in Valencia for panoramic views of the city, the Turia gardens and the sparkling Mediterranean coastline. Here, you’ll enjoy a wine-tasting of specially picked wines from local wineries paired with a menu made up of the best local flavors. All with an unforgettable backdrop.

The menus on both tours are carefully designed to showcase the best local produce and suppliers from the Valencian community. Sea Saffron invite their guests to taste the typical flavors of Valencia and discover the region’s most beloved dishes. They also serve prizewinning regional wines, with a focus on local winemakers and grapes typical to the area.

Book Sea Saffron’s Tours and use the code TRAVELBUNNY10 for an exclusive 10% discount. 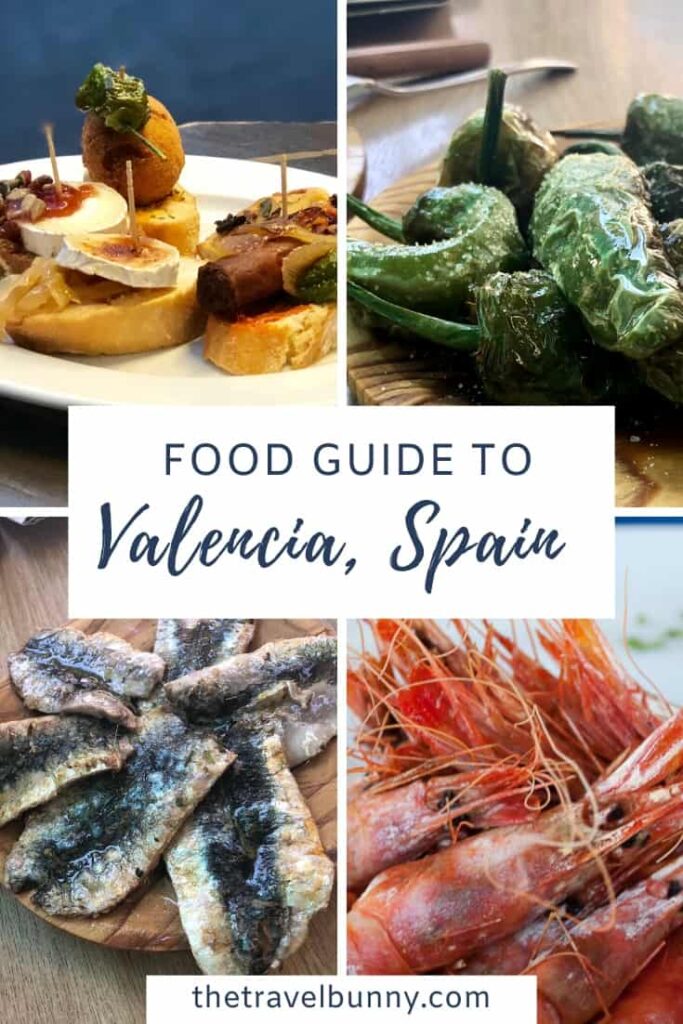 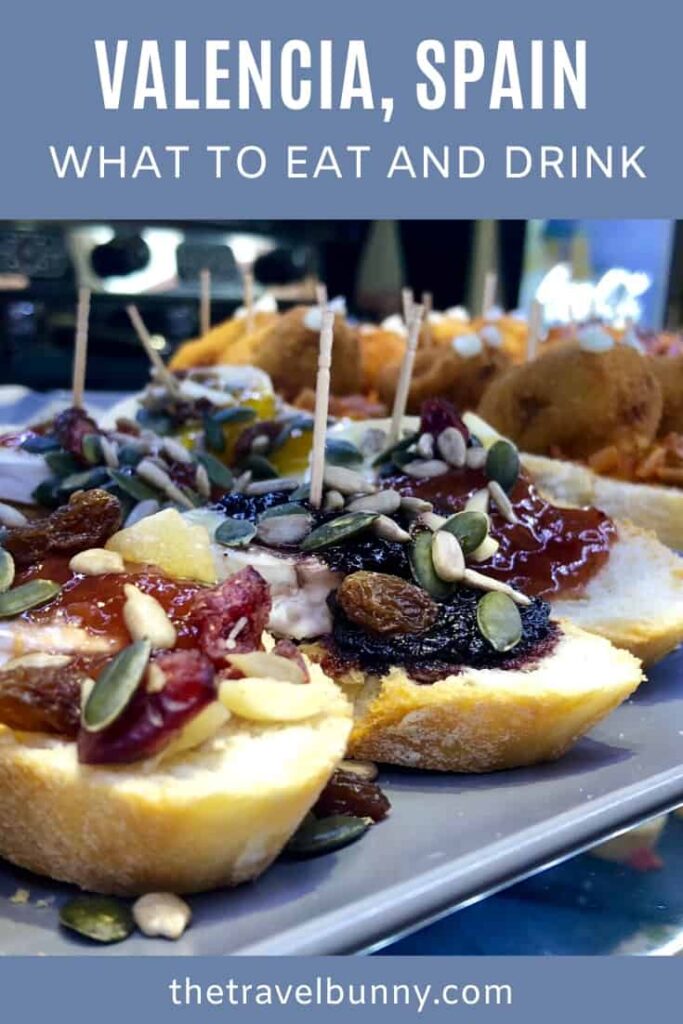 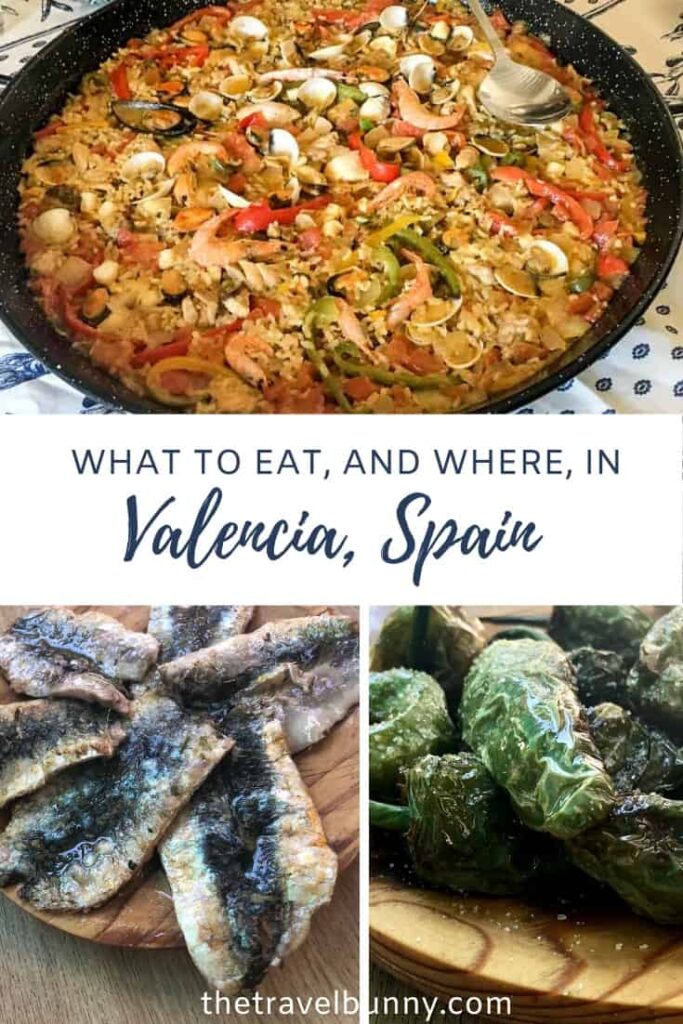