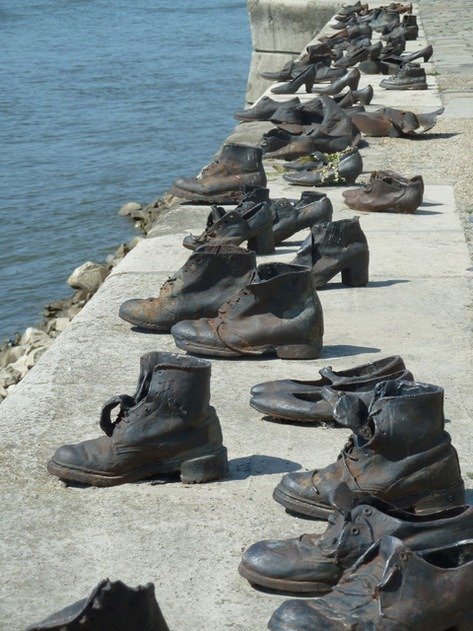 While in Budapest in May we came across a very moving memorial.  About 300m before the Parliament Building on the banks of the Danube is a sobering sight. The Shoes on the Danube is a poignant memorial to Jewish citizens rounded up and executed on the banks of the Danube by the Arrow Cross Militia men in 1944-45. The victims were ordered to remove their valuable leather shoes before being shot and flung into the river.

Read more: The perfect itinerary for two days in Budapest

The Shoes on the Danube is made up of sixty pairs of shoes cast in iron, rusted, weathered and worn, which now stand on the spot as a reminder of this chilling event.  Mens’ work-boots, daintier ladies’ shoes and a pair of child’s boots are among the memorial shoes. Some pairs are neatly placed together, others on their sides laces adrift, some contained tributes – candles or wilting flowers.  The shoes are incredibly personal; moulded to the shape of the feet that wore them, down at heel and well-worn. 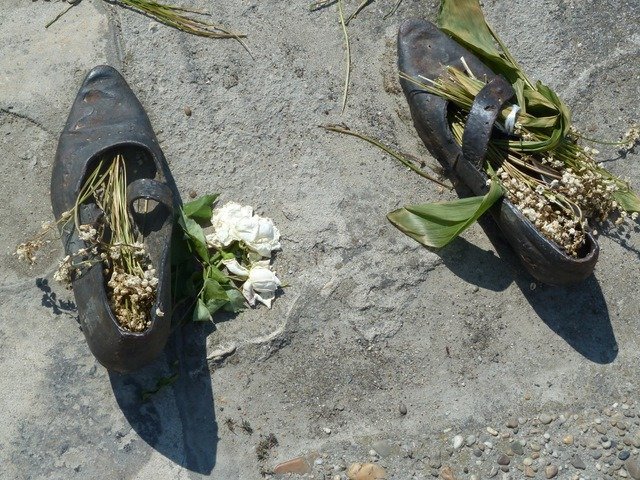 The shoes are incredibly personal; moulded to the shape of the feet that wore them, down at heel and well-worn.  We left this moving memorial in reflective mood, glad to have seen it. Read on for more things to do in Budapest.

I have heard about and see this memorial on photos - but yours are the best. I wanted to use images from this, but none are good enough through Google. So sad, terrible crime against humanity and the worst thing is that similar action against people happens in many places today.

The memorial is incredibly moving - shoes are so personal. I'm happy for you to use any of my photos if you'd like, just let me know and I can email some over to you :)

That's pretty sad! Have you seen Oradour Sur Glane in France? That's an incredible place. It's important these things are there as a physical representation of history.

Hi Sandy, thanks for dropping by - We visited Oradour Sur Glane when we were in France in 2010 but I couldn't bring myself to take any photographs (and if you know me that's pretty much unheard of) the experience affected me deeply. I agree, these events should be remembered.

Heather on her travels

How very moving - it's good to be reminded of the people who wore these shoes.