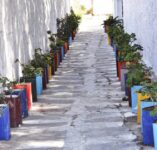 […] the centre of a circle of Greek islands called the Cyclades. Just a 25-minute boat trip away from Mykonos it’s one of the most important mythological, historical and archaeological sites in Greece.  […]

[…] during a trip from Skiathos. But that was a long time ago. Too long ago, and a day excursion to Mykonos and Delos during a cruise last year got me thinking that it’s time I gave the Greek Islands some […]

Those windmills are so iconic, I would love to visit Mykonos. Sounds like you had a wonderful cruise, Suzanne!

The cruise was fabulous and I loved our day in Mykonos so much that I planned a trip back to Greece - so I'm in Crete right now and it's so lovely!

Ohhhh so pretty!! I am crazy to visit Mykonos and Santorini!! I hope it wont take long until I do! Lovely post and amazing photos Suzanne :D

Ah the lovely colours of Mykonos - I'd love to visit Santorini too, especially for those fabulous sunsets :)

mykonos is a nice island but a bit touristy. Let me recommend nearby Naxos and Paros instead!

Did you get to Delos? - that's an interesting island and just half an hour on the boat from Mykonos. I'll have to check out Naxos and Paros - I'd definitely like to soak up some Santorini sunsets.