Jack in the Green Hastings 2020 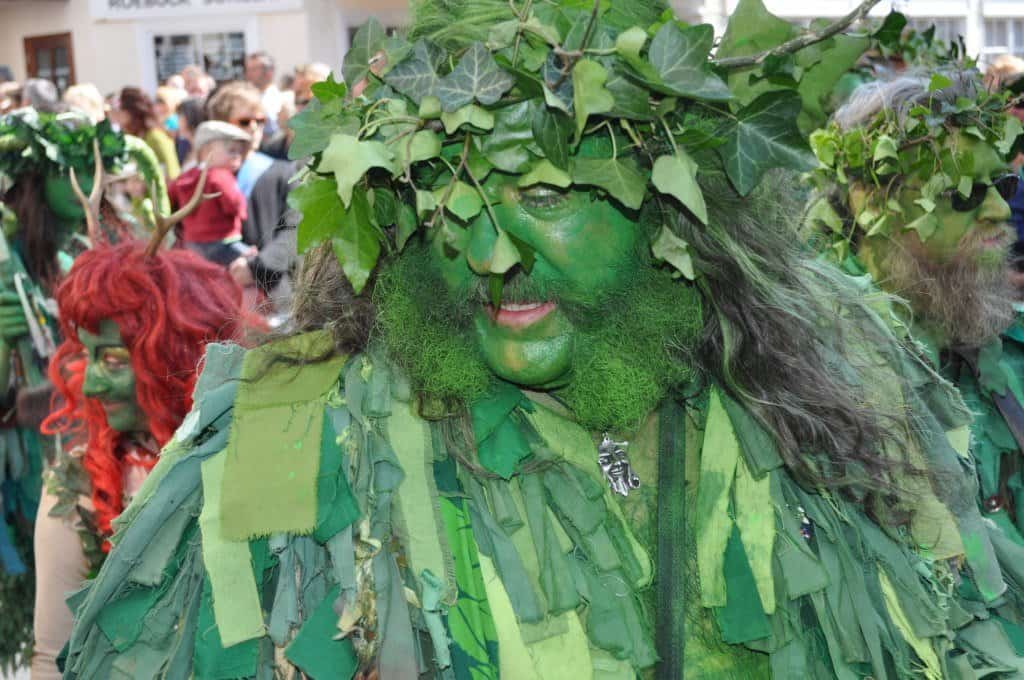 Hastings Jack in the Green Parade

Jack in the Green in Hastings is a big festival for local people and one we look forward to for months. It’s a sign that we’ve left winter behind and that summer’s on its way. A bit of May Day madness. It’s also one of the UK’s biggest and best Jack in the Green festivals.

If you head down to Hastings Old Town you’ll more than likely go home with a green nose. Jack in the Green, a festival of fun, frolics and foliage, celebrates the releasing of summer.

The Green Man festival in Hastings is a popular Sussex event and takes place over a four day period over the first weekend in May. It culminates in a bizarre procession through the town on Bank Holiday Monday.

Scroll down for this year’s dates and timings.

It is with great sadness that Hastings Traditional Jack in the Green has decided that in the current circumstances it would be both impossible and irresponsible to go ahead this year.

Jack in the Green, Hastings 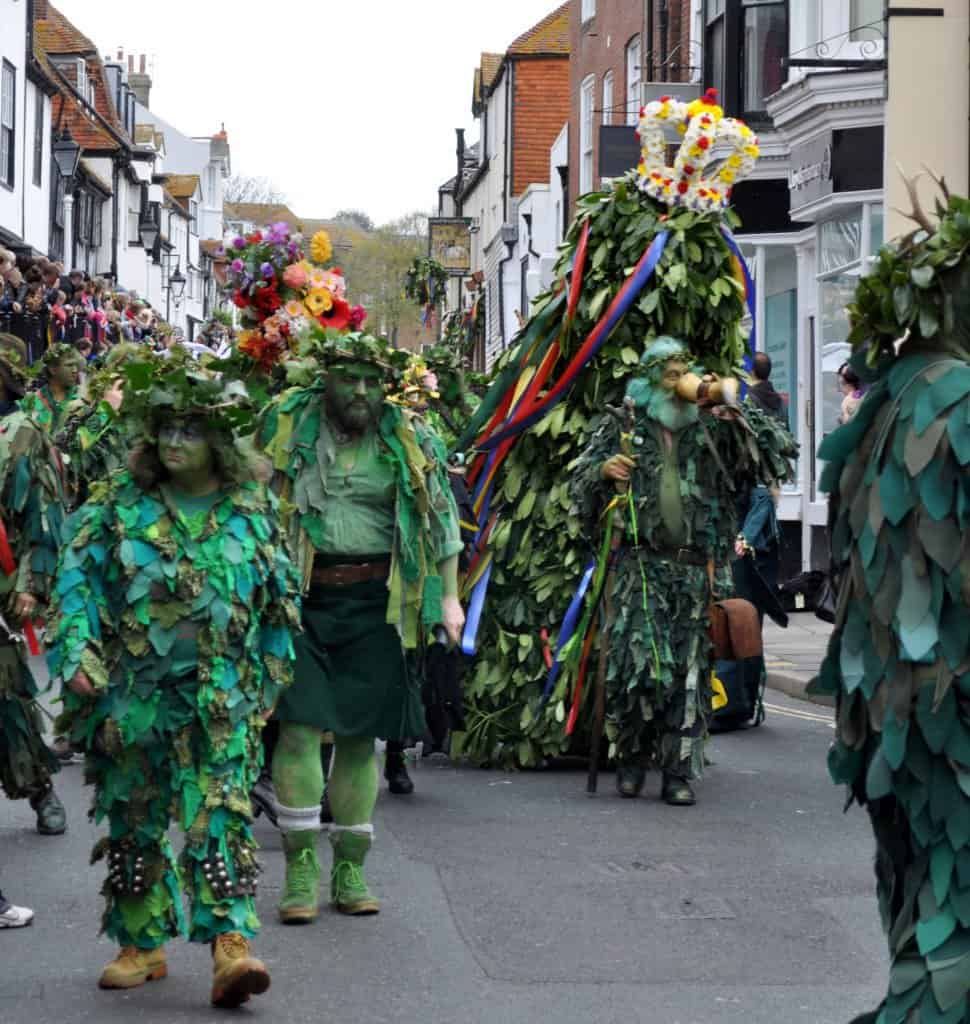 A vague history of Jack in the Green

A traditional May Day character symbolising winter, Jack, is at the heart of the green man festivities. Jack leads the procession through the ancient lanes of Hastings Old Town flanked by the green bogies.

The custom originally started as part of English May Day celebrations in the sixteenth and seventeenth centuries. The townsfolk created a garland of flowers and leaves to decorate Jack. The garland gradually became more and more elaborate with neighbouring villages trying to out-do each other. Eventually Jack ended up covered from head to foot in foliage. Green Jack then became known as Jack in the Green.

The custom died out in the mid-1800s. The bawdy displays were frowned upon by prudish Victorians and Jack was replaced with the more demure Queen of the May. Some believe Jack goes back further and has more pagan connections.

Looking for accommodation in Hastings? Check here for availability and prices 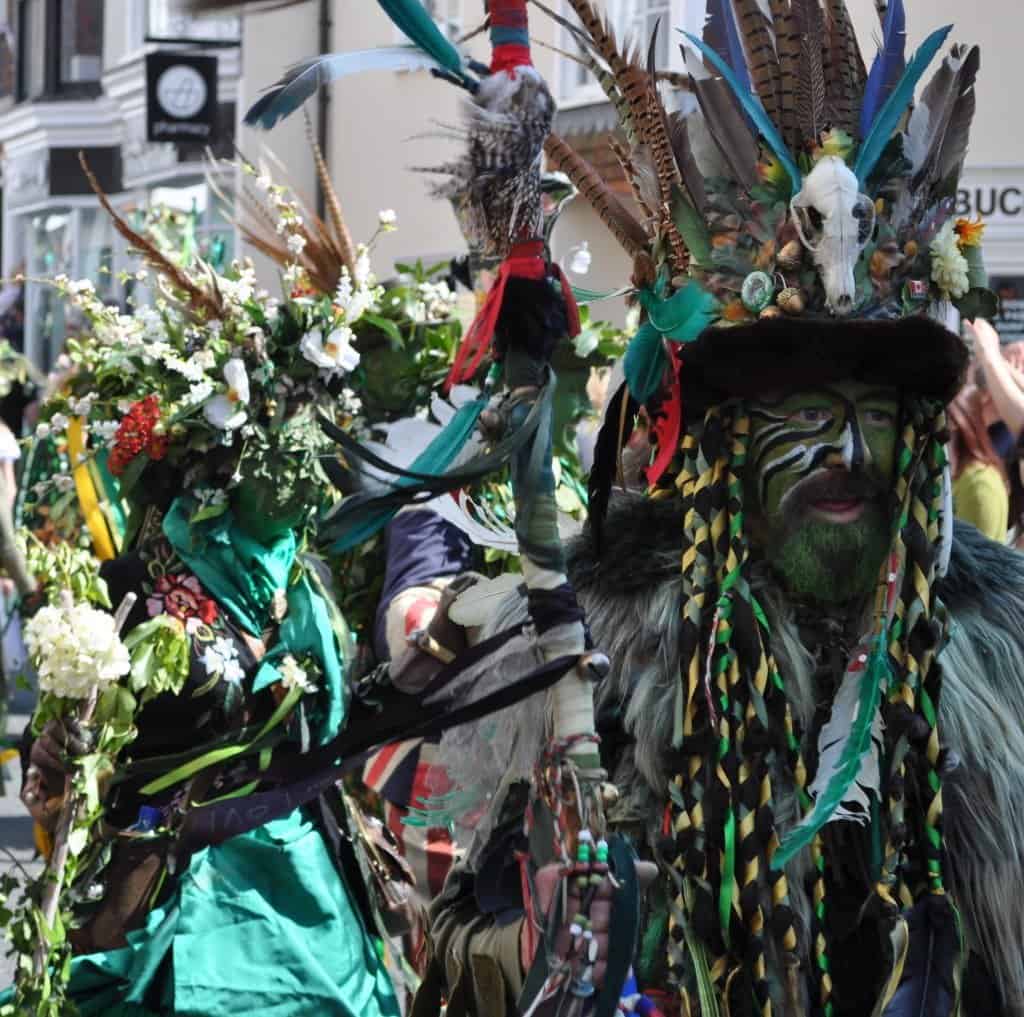 One of Jack’s Green Bogies

In Hastings, however, Jack is back – and with a vengeance! Hastings Jack in the Green festival was revived in 1983 and is now one the most popular events on the local calendar.

The green man parade kicks off with ‘the Gathering’ next to the tall black fishermen’s huts in The Stade in Hastings Old Town. It’s here that ‘the greening’ begins. Jack’s attendants, the green Bogies, bedecked in green rags and foliage start their drumming.

The crowd cheers as Jack, a towering vision of vegetation with crown atop, is released into the town. The crown consists of red blue and gold flowers and ribbons which represent the colours of the Cinque Ports.

Part man, part bush and big part alcohol the Green Bogie is Jack’s friend and minder. There are twelve in total. The Green Bogies, along with Black Sal, Jack’s consort, accompany Jack through the town up to Hastings Castle.

If the bogies spot anyone on the way who isn’t green enough they’ll soon sort it with a dab of green face-paint to the nose. If you’re not so lucky you’ll get a face full. It’s best not to catch the gaze of a green bogey… 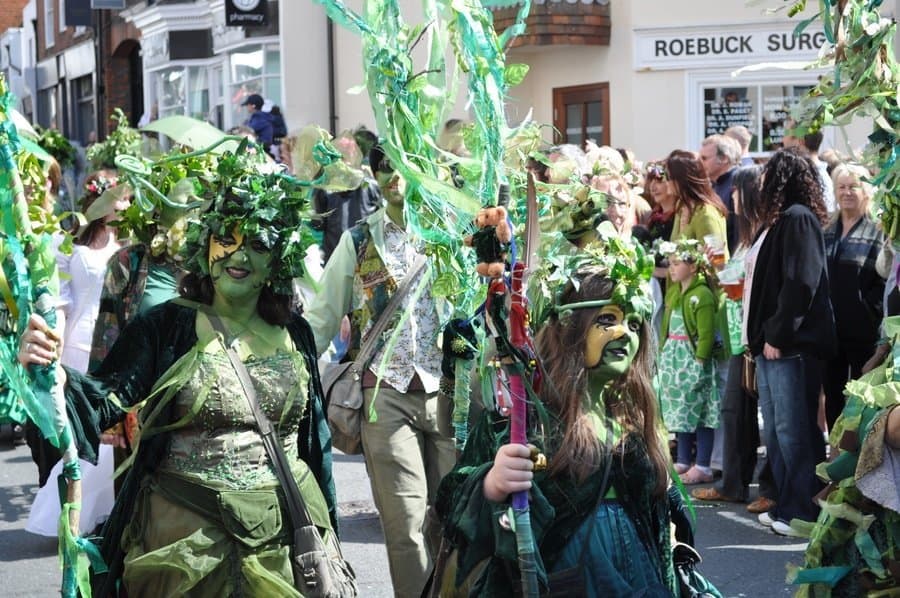 Hastings Jack in the Green – The Morris Sides

The Jack in the Green procession consists of many local Morris sides. Mad Jack’s Morris is a local Morris side responsible for the revival of the current festival. Behind them the Sweeps, brushes held aloft are followed by Hannah’s Cat Morris, a womens’ side, dressed in purple and pink, who dance and flick their handkerchiefs as they go.

The Lovely Ladies and Gay Bogies are all dressed to impress and have some of the more elaborate costumes – a hat topped with a stuffed raven, a stag head dress and every shade of green. Some are quite folksy others more neo-pagan and slightly Goth. Various Morris Sides jingle along, clacking their sticks whilst musicians and drummers make up the rest of the parade.

Following up the rear are the towering Mollies or Giants made from papier Mache and standing around 12 feet tall.  Each one represents a local town; the form of the giant depends on the town’s history and traits. 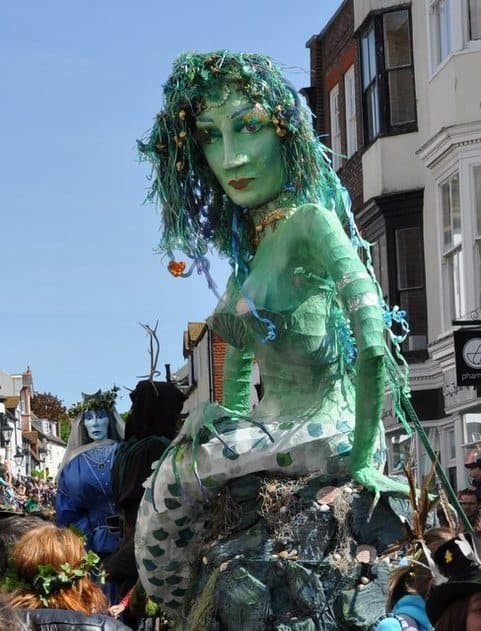 My first Jack in the Green and the day dawned bright and sunny. Crowds jostled, keen to get a good view. Everyone’s dressed in green, some with garlands in their hair others, like me, with green noses. Yes, the Bogies got me.

Music fills the air, infectious rhythms and beats weaving their magic through the crowds. The sunshine adds to the atmosphere together with anticipation of the summer after a long, dark winter. And the pubs open early. 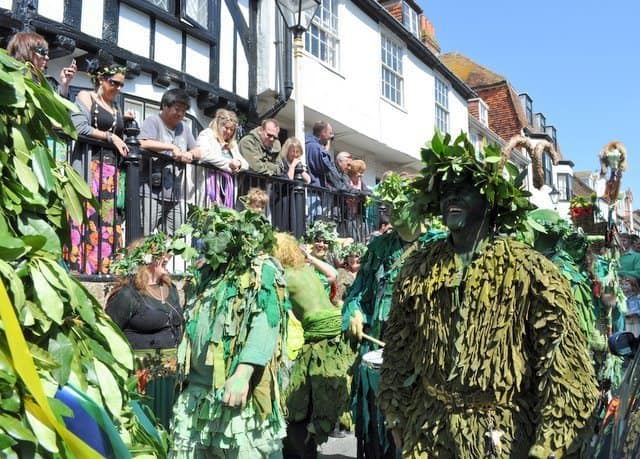 Jack in the Green parade Hastings

The Jack in the Green procession makes its way through the town with more than a few refreshment stops en route. There’s plenty of time to catch a glimpse of the main players and colourful costumes during the breaks. Place yourself next to a good pub and you won’t be disappointed.

Eventually the procession makes its way up to the castle on the hill. As Jack arrives there “Twiggy”, aka a bundle of twigs, is hoisted to the top of the flagpole while the procession is drummed in by the Bogies. 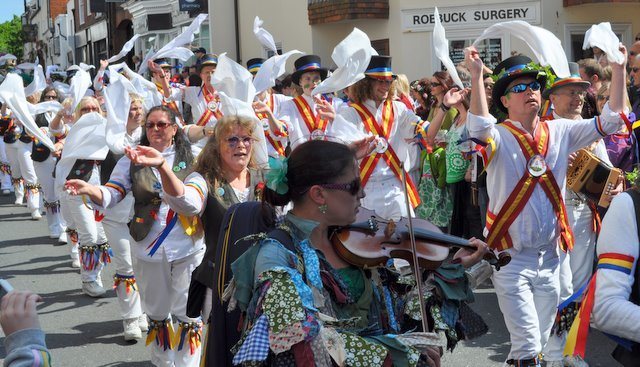 Up at the castle the Morris Sides take to the stage for a dance-off so each can showcase their signature dance. Food stalls sell tasty snacks; a craft fair offers home-made goods and, of course, there’s the obligatory beer tent.

When the dance-off ends the Green Bogies march Green Jack to the stage. The drumming becoming louder , faster and more frenzied. Finally, poor Jack, the symbol of winter, is slain by Mad Jack’s Morris Men. Jack’s foliage is distributed to the onlookers. The spirit of summer is released so we can all look forward to the good weather to come. Well we can live in hope… 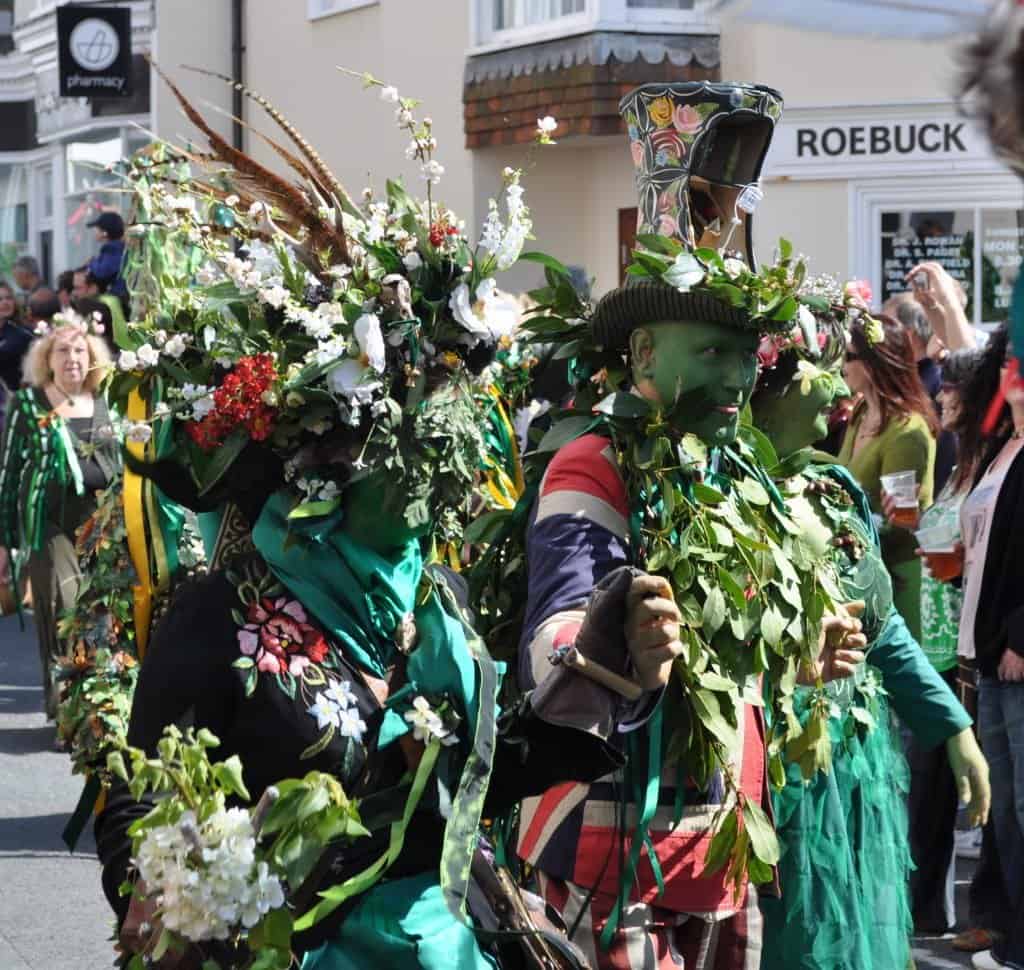 Jack in the Green, Hastings – characters from the parade

Looking for accommodation in Hastings? Check here for availability and prices. 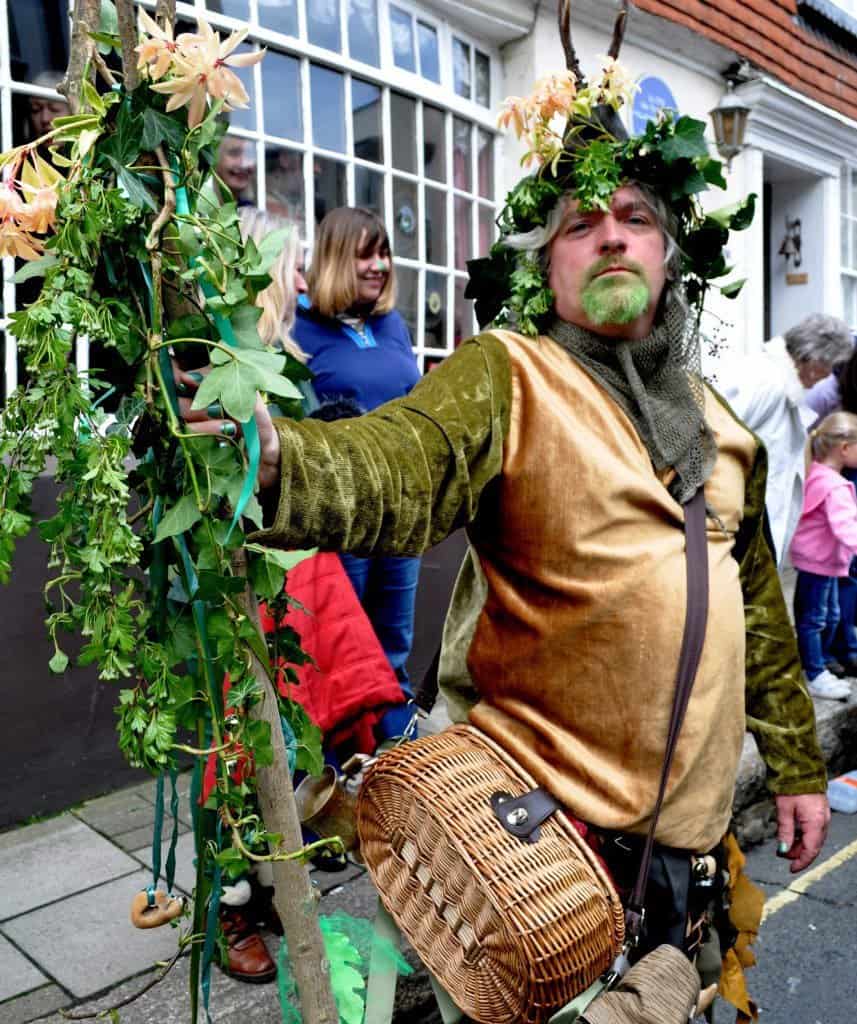 It is with great sadness that Hastings Traditional Jack in the Green has decided that in the current circumstances it would be both impossible and irresponsible to go ahead this year.

Hastings Jack in the Green runs over a four day period beginning on Friday and ending on Bank Holiday Monday (May Day).

The timings below are for the main parade day on Monday Bank Holiday. These are approximate but should help you plan out your day.

7.30am to 9.00am – Breakfast – St. Mary Star of the Sea Church Crypt, The Bourne Hastings TN34 3BD. This is a ‘not for profit’ breakfast, with all proceeds going to the Two Towers Trust.

9.45am – The Gathering – Hastings Fishermen’s Museum, Rock-A-Nore Rd, Hastings TN34 3DW. This is where the characters taking part in the procession will be gathering to wait for Jack.

10.15am – Jack is Released – This is where the fun really begins. Jack first appears in his familiar giant green-leafed cloak and flower crown, accompanied by his Bogies. The Bogies are Jack’s protectors and their job is to keep him safe whilst he creates his mischief in Hastings. After dancing with ‘Mad Jack’s Women’, his next move is to start the procession by leading everyone along Rock-a-Nore Road and up the very narrow All Saints Street.

11.30am – Time for a pause in The High Street – Whilst everyone has the opportunity for dancing and some refreshments, Jack travels back through the procession to meet all of his followers. Once he’s ready, the procession re-gathers behind him so he can lead them up towards the West Hill at around midday.

11.45am – Entertainment for the crowd – This is a 45-minute slot where guest entertainers keep the crowd buzzing as the procession moves onwards towards the West Hill.

12.30pm – The procession winds its way up Croft Road and Collier Road in order to arrive at the Main Stage, West Hill – This is where the fun really starts. Throughout the afternoon,  a range of musicians and folk groups along with Morris dancers and drummers perform on the stage. There is also an entertainment area for children, food stalls and refreshments tents with plenty of Real Ale from local brewers.

3.30pm – Slaying of the Jack – After all the merriments and the dancing, it’s time for the Bogies to parade Jack down to the main stage where he is symbolically slain. His demise signifies the release of the Spirit of Summer for the coming year.

Hastings also hosts thousands of bikers from the May Day run on 06 May. The event involves thousands of motorbikes and scooters taking a 55-mile (89 km) trip on the A21 road from Locksbottom to Hastings seafront which coincides with the Jack-in-the-Green festival. May Day in Hastings is quite an event!