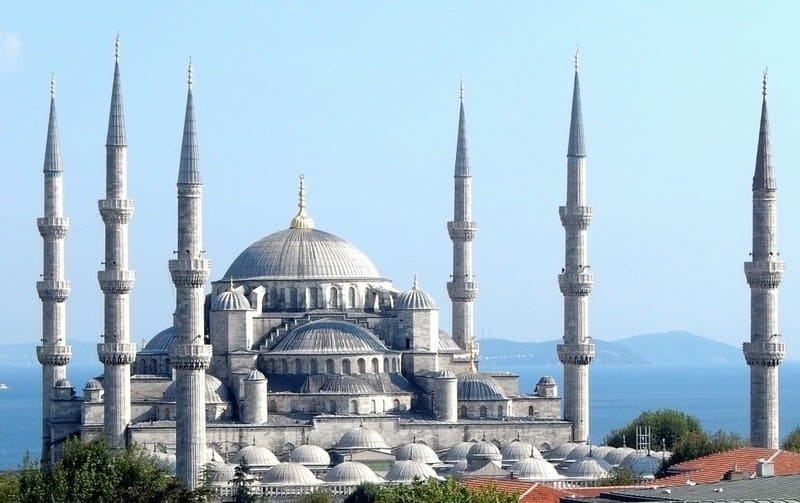 This was my first visit to Istanbul and Sultan Ahmet Camii was high on my must-see list along with Hagia Sophia Mosque and the Basilica Cistern. Since they’re all in close proximity in the Sulthanamet area, the Blue Mosque is the perfect place to start exploring the city.

Sultan Ahmet 1 became the 14th emperor of the Ottoman Empire in 1609 at the age of 13. In a sort of mosque face-off he ordered the building of a new mosque to rival the nearby Hagia Sophia. The Sultan demanded the mosque have ‘altin minaret’ or gold minarets.

His architect misunderstood and built the mosque with ‘alti minaret’ – six minarets instead. The only other mosque in the world with as many minarets was the Haram Mosque of Mecca. Awkward. The religious leaders of the time were so outraged that the Sultan sent his architect to Mecca to build a seventh minaret so that the holiest of mosques could retain its superior status.

We approach the mosque from the West side near the Hippodrome for our first, close-up, glimpse. This is the best place to appreciate the mosque’s perfect proportions rather than from Sultanahmet Park. A step through the tall wooden gates and into the Blue Mosque’s courtyard and we’re face to face with the spectacular dove-grey domes, marble walls and gold-tipped minarets. 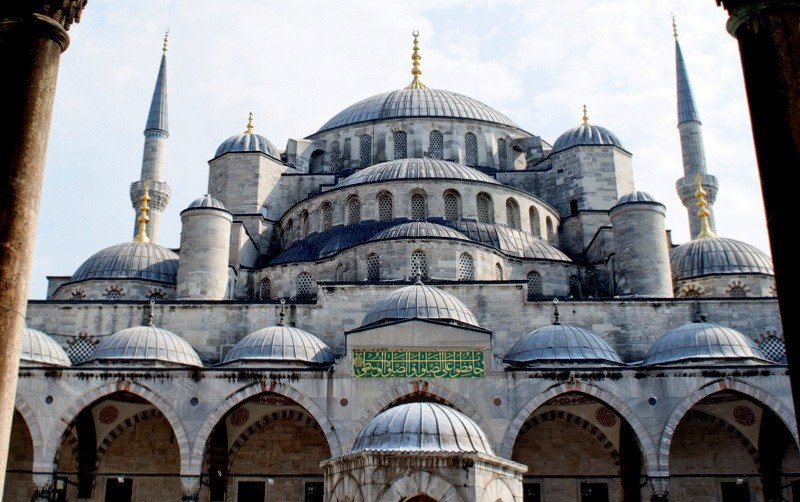 At this point most people just stop and stare and the courtyard is busy with people gazing upwards in awe. The mosque is truly beautiful with its gently curved domes appearing to bubble upwards. We stay for half an hour exploring the courtyard enjoying the beautifully ornate cloisters and the views of the domes.

To enter inside the mosque itself we exit the courtyard and head around the outside to the south door which is for tourists. This also helps the prayer part of the mosque retain its sacred air.  Worshippers enter through the main door after using the ablutions area.

As the mosque is a place of worship dress code is strict. Before we could enter I made sure my legs, head and shoulders were covered. We also took socks with us as shoes had to be placed in plastic bags before we could enter. Recently officials have become stricter and now there are more stringent checks to ensure that visitors dress appropriately.

Robes are handed out to under-dressed tourists so if you don’t want to wear one of these don’t dress inappropriately. I visited again more recently and despite wearing the correct clothing I was still handed a robe to wear.

Inside the Blue Mosque, Istanbul

The interior of the blue mosque is cool and we notice an air of hushed calm as visitors become aware of the beauty inside.  A lone worshipper immersed in prayer kneels on the deep red carpet. The building is a work of art and earned the moniker ‘Blue Mosque’ because of it’s ornate decoration.

More than 20,000 blue Iznik tiles in traditional Ottoman patterns adorn the walls and ceilings. Lilies, carnations and tulips are depicted throughout.  We were able to see some of the tiles from the ground floor although the majority are on the upper levels and out of sight. The inside of the blue mosque is even more stunning than the outside. 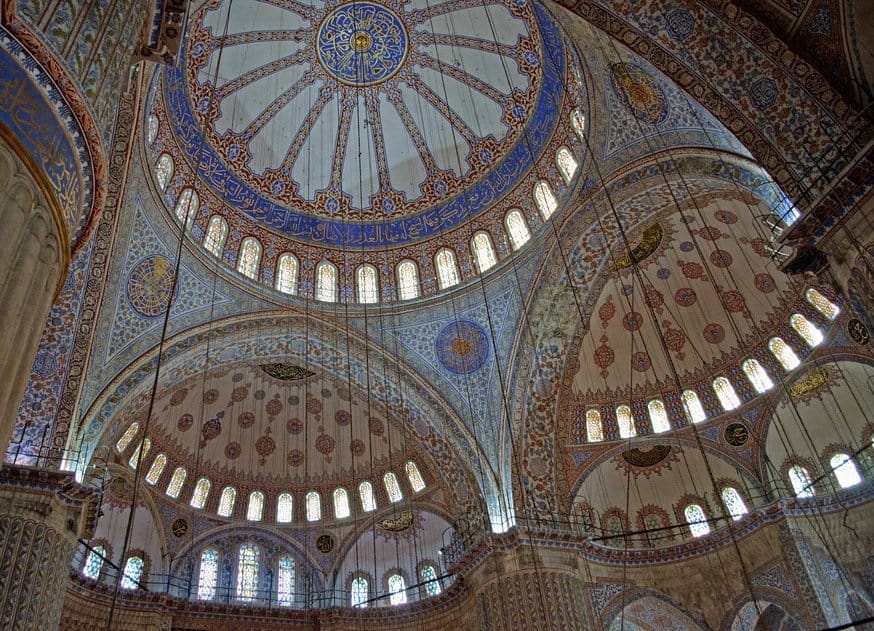 Inside the Blue Mosque the interior domes are intricately tiled, painted and decorated with verses from the Koran and the sayings of the prophet Muhammad. We padded across the carpeting in our socks, necks craned upwards. Softly coloured rays of light filtered on to us through the 260 stained-glass windows. 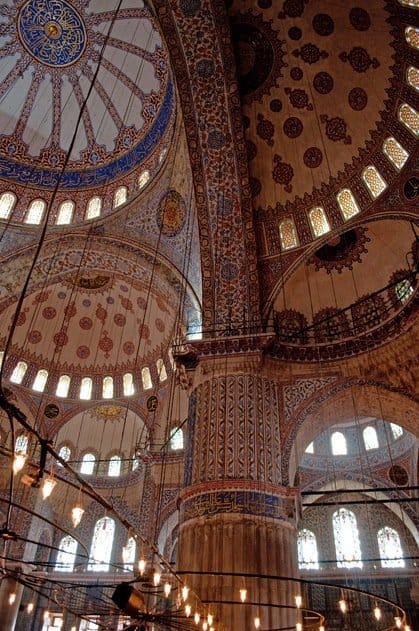 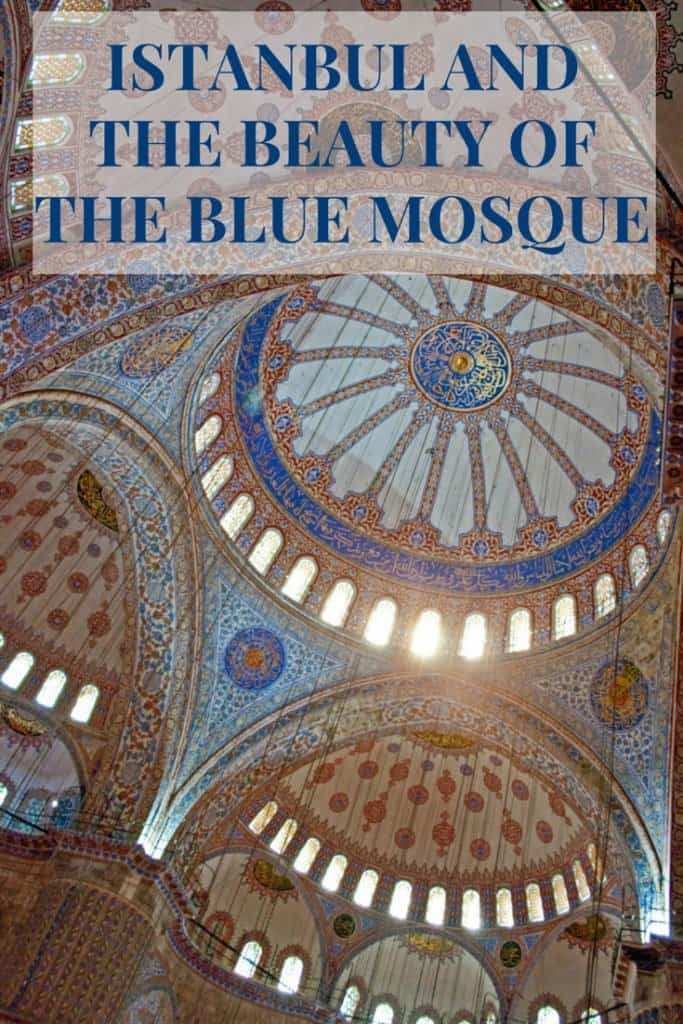 Leave a Reply to Sand In My Suitcase Cancel reply