All the food in New Orleans

All the food in New Orleans. Me oh my oh! New Orleans is a mecca for culinary encounters with a unique food scene covering its Cajun, Creole, Caribbean, African and European heritage.

When you’re not soaking up the street sounds, exploring the city sights (see my guide for 3 days in New Orleans) or moseying down the Mississippi you’ll want to tease your taste buds with all the food and drink that New Orleans has to offer. And there’s a lot. Be prepared to come out of there a few pounds heavier than when you went in. Here’s what the Big Easy brings to the table. 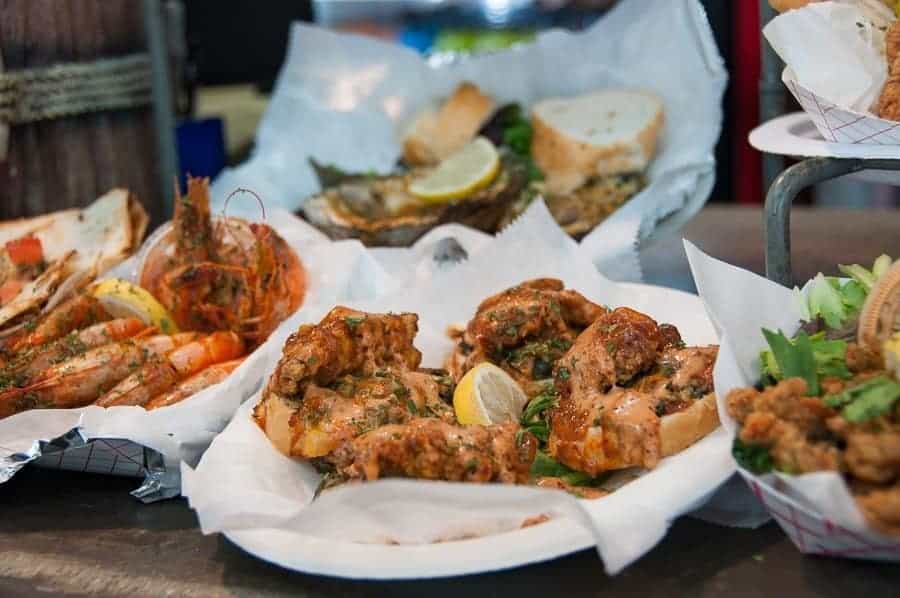 You might have noticed that I like to explore a destination through its food. It’s a great way of getting a taste for a place. A Po’ Boy was first on my list of New Orleans must-eats. A crusty baguette filled to overflowing with classics like hot roast beef and gravy, shrimp, oyster or crab. There’s some New Orleans’ history attached to the Po’ Boy. It’s said that the name comes from ‘poor boy’. When the street car drivers went on strike in 1929 local restaurants supported their cause by creating a cheap sandwich made with French bread and scraps of roast beef. Nowadays the Po’ boy’s evolved and many different varieties are available. ‘Dressed’ means it comes with lettuce, tomato, mayo, and pickles. I got my BBQ chicken Po’ Boy at Killer Po’ Boys 219 Dauphine Street in the French Quarter. 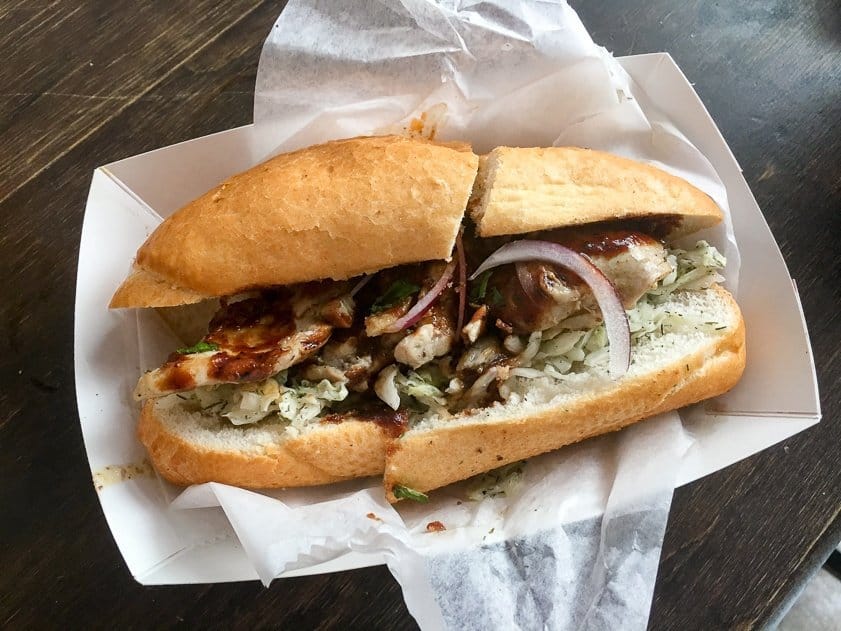 From classic crawfish boils to mouth-watering oysters, prawns, lobster and crab it’s all dished up in NOLA. New Orleans is big on seafood and almost every restaurant serves seafood with the freshest hauls from the Gulf on the menu. For Cajun seafood New Orleans’ style, delicious oysters and seafood head to the French market. It’s a a great place for a casual lunch and there’s epic people watching potential too.

Food in New Orleans originates from many different natiionalities. Muffaletta is a sandwich-and-a-half and takes its name from the round sesame loaf that NOLA’s Italian immigrant community brought to the city. A round, seeded bap is halved and loaded with layers of cold meats and cheese. Salami, ham, mortadella, mozzarella and provolone cheese are favourites. Olive salad made with chopped olives, capers, peppers, parsley, giardiniera (gherkins) and garlic tops it off. The juices from the olive salad soak into the soft bread for extra deliciousness. Get yours at Central Grocery and Deli home of the original Muffaletta. 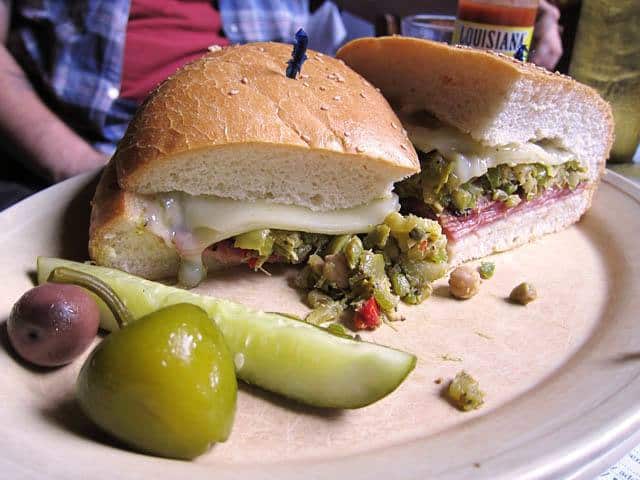 Mudbugs, crayfish, crawfish or freshwater lobster, call them what you will, these bright orange crustaceans are big in NOLA. Crawfish boils take place on the streets during the season – generally from early March to late June depending on the weather. We were there in September so missed out big time but we did see some pulled out of the water during our Cajun swamp tour. The crawfish are boiled in huge pots of water with salt, lemon, garlic, cayenne pepper, chunks of potato, corn on the cob and Tony Chachere’s creole seasoning. It’s customary to suck the juice out of the heads where it all collects during cooking. Not sure about that but I’m told it’s the best bit. 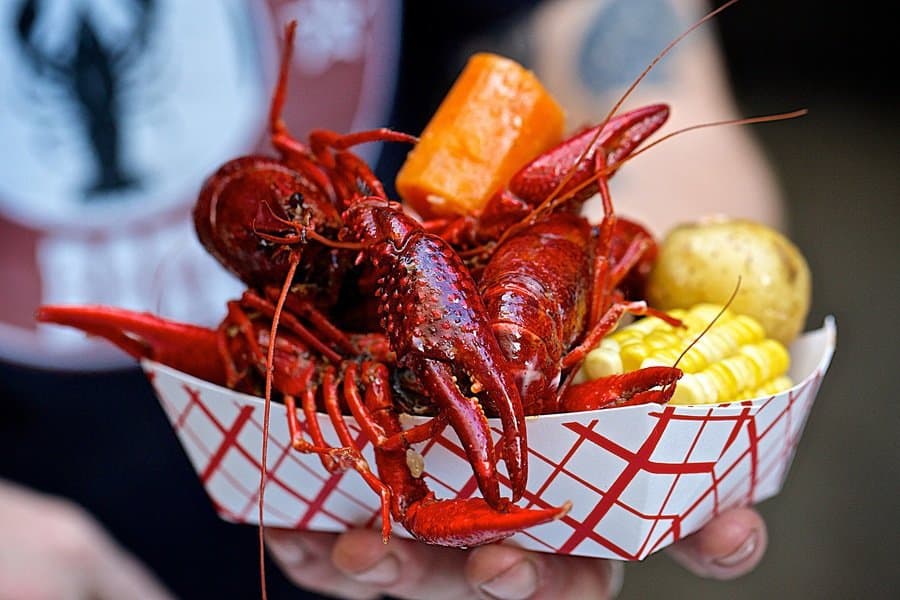 Across the road from Jackson Square you can satisfy your sugar craving and bag a Beignet at Café du Monde. A beignet, pronounced ben-yay, is a square piece of dough, deep-fried and heaped with powdered sugar. Bit like a doughnut. They ‘re delicious, especially if, like me, you’ve got a sweet tooth. Beignets are traditionally served with coffee and chicory. The chicory was used in times when coffee was scarce to add body and flavour. At Café du Monde the chicory gives your coffee au lait a subtle chocolatey taste. The cafe was established in 1862 and is open 24 hours a day seven days a week except Christmas Day or when a hurricane happens to hit. 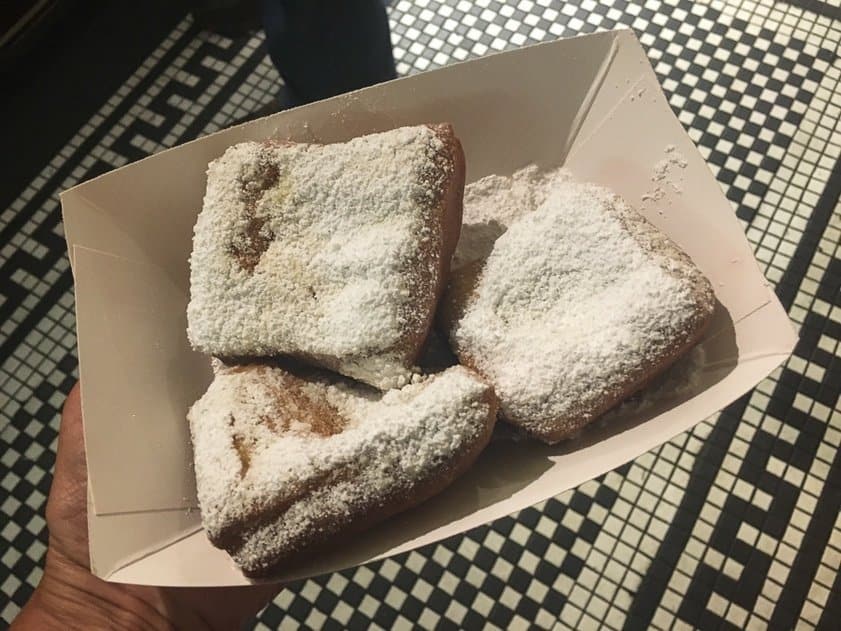 Jambalaya is probably the result of Spanish settlers trying to recreate paella with home-grown Louisiana ingredients. It packs a punch of rice, chicken, smoked sausage and the Creole and Cajun ‘holy trinity’ of vegetables; green peppers, onions, tomato and celery. Jambalaya is all cooked up in a pot together just like paella. But not all jambalayas are created equal and the shot below is the one I had at The Cornet. Great venue but do you see any ‘holy trinity’ in this? No, me neither. It wasn’t spicy either – had to ask for the hot sauce. The best New Orleans Jambalaya, I’ve since been told, is served at Coop’s Place 1109 Decatur St. in the French Quarter. Good excuse to re-visit New Orleans. 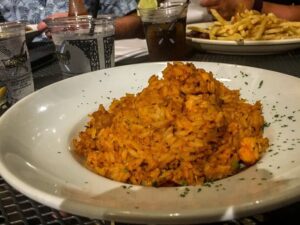 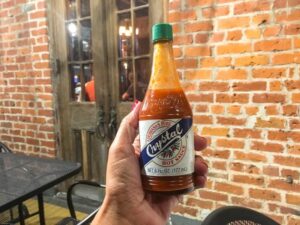 Another classic Creole food in New Orleans is Gumbo. It’s an all-in-one stew made with chicken, pork or seafood layered with fresh vegetable, herbs, spices and thickened with okra or filé. Authentic gumbo recipes use Andouille, a spicy, smoky sausage to amp up the flavour and it smells divine. Unlike the Jambalaya the rice is cooked separately. 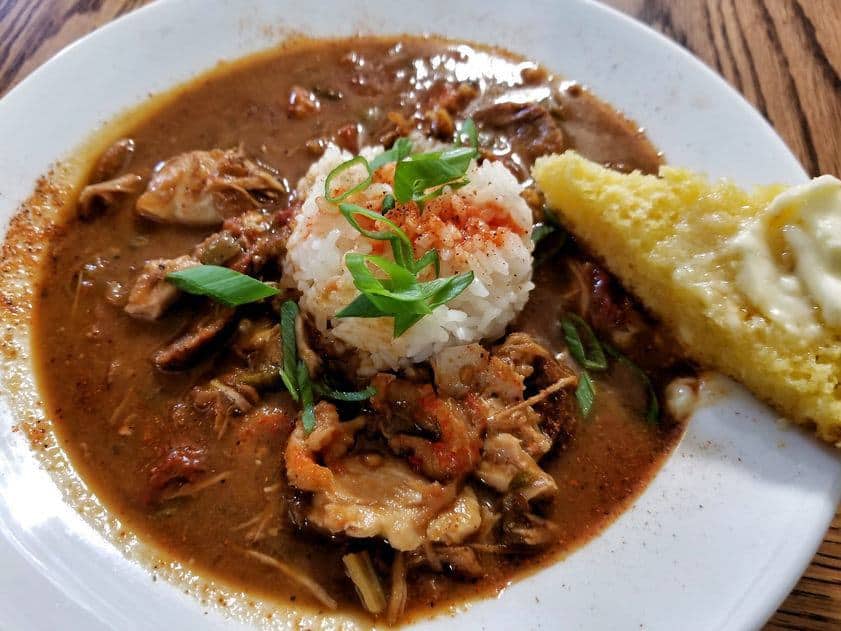 Only order red beans and rice on a Monday or they’ll guess you’re not a local. Actually, I think they guessed from my ‘cute English accent’. Beans and rice is a Monday night institution which used to be made from the leftover pork scraps and bones from Sunday lunch. Pork was a traditional Sunday meal so vegetarians step away from the rice and beans because there’s meat in there. Nowadays they use more than just scraps and everyone makes this dish to their own recipe so it’ll taste slightly different wherever you go. Every chef will tell you that theirs or their Mama’s or their Grandmama’s rice and beans is the best. Have it with hot sauce. 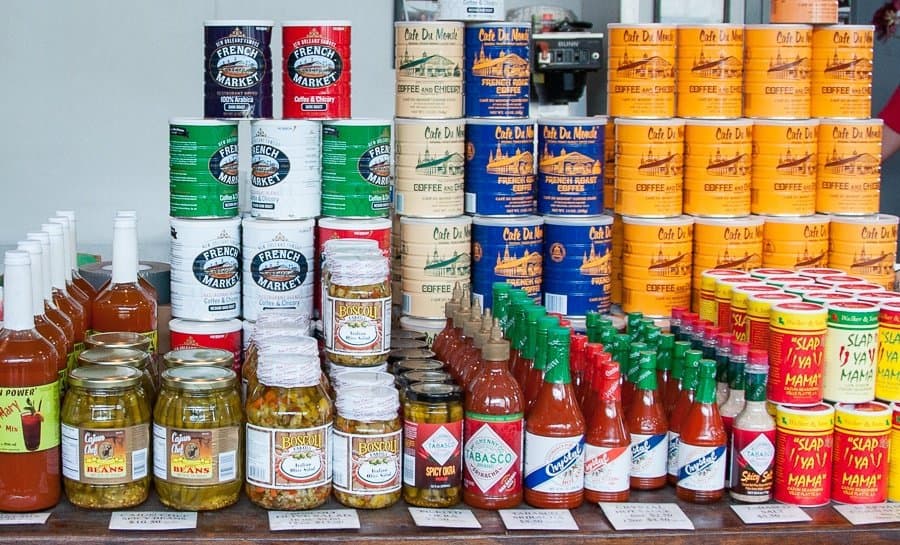 When you’ve had your fill of big ass beers and hand grenades on Bourbon Street then New Orleans boasts a fine history of cocktails. Here’s a few to start you off and where to drink them…

Lafitte’s Blacksmith Shop Bar is said to be the oldest structure used as a bar in the United States and was built between 1722 and 1732 as a cover for illegal smuggling activities. Whether it was ever used as a blacksmith is debatable but it’s a good spot for a purple Voodoo Daquiri in one of the only surviving French Colonial-style buildings in the French Quarter. Of course, it’s haunted by the ghosts of those who perished in the fires of 1788 and 1794. You’ll find it on the corner of Bourbon Street and St. Phillip Street, on the far side of the French Quarter. We dropped by a couple of times and loved the spooky atmosphere both in the bar and the outside garden. 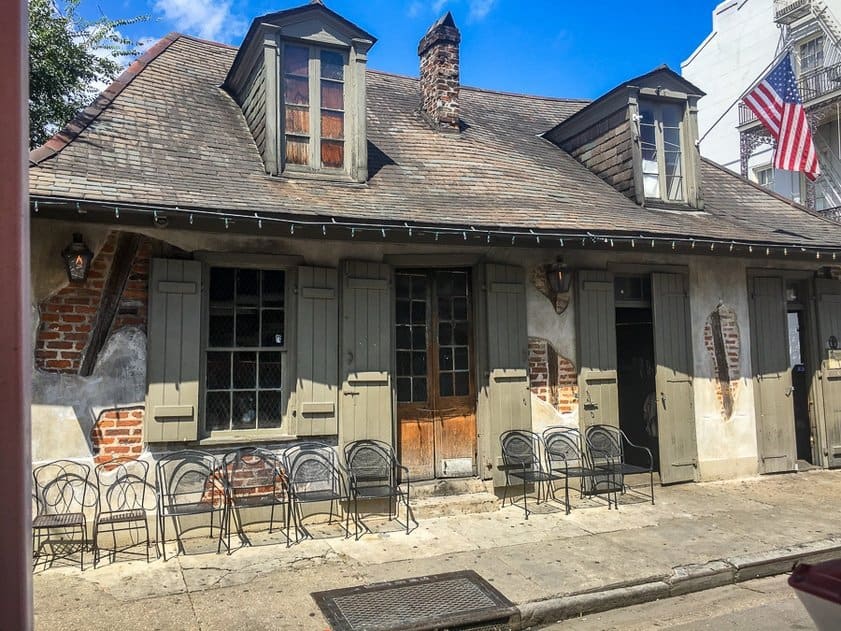 Try the most famous drink in the most famous bar in the city. They’ve been serving up Hurricanes at Pat O’Brien’s since the mid-1940s. Of course, there’s a story behind it. This is New Orleans you know. Back in the day there was a shortage of whisky and bourbon but a glut of rum. The spirit company made bar owners buy 50 barrels of rum before they would let them buy the whisky. Pat O’Brien invented a cocktail to get rid of all his surplus rum and served it in a glass shaped like hurricane lamp. You see where this is going…? The sweet concoction of rum, fresh lemon juice, passion fruit syrup and ice is best drunk in the bar’s courtyard by the famous fountain. Be warned it packs a storm force punch. 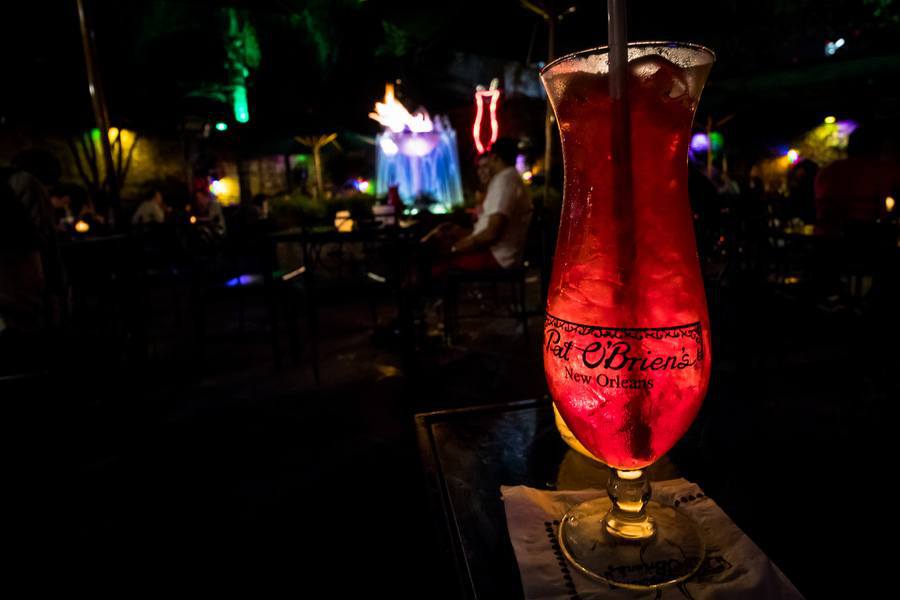 SAZERACS AT THE MONTELEONE CAROUSEL BAR

Take a spin on New Orleans’ only revolving bar with the city’s signature cocktail, the Sazerac, in hand. The famous Carousel Bar is part of Hotel Monteleone in the French Quarter and overlooks Royal Street. The 25-seater, circus-styled, Merry-Go-Round bar slowly revolves and gives you the perfect excuse for being slightly wobbly when you leave. If you want to discover all New Orleans’ famous cocktails, and there are a few, then take a cocktail walking tour which stops off at the Carousel Bar. Check here for tour details.

That’s just a small taste of New Orleans. Feeling hungry now? Thought so. If you’ve been to New Orleans please share your best tips for eating in the city.