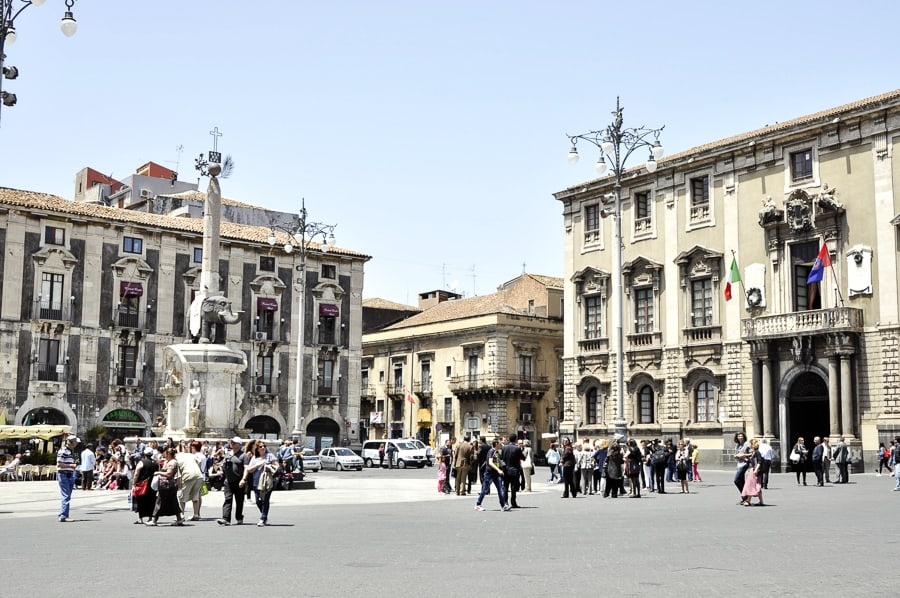 What to do in Catania, Sicily

I’d heard that the city was ‘a bit shabby’, ‘not too much to see’ and as I had just one day in Catania I decided I’d take the bus from Catania to Taormina to visit the ancient Greek theatre. Well, that was the plan until we took an evening stroll when we arrived and discovered that Catania’s actually rather grand, lively and buzzy. I wanted to see more so I cancelled the bus trip and stayed behind to spend the day touring Catania. I’m glad I did because there are a lot of things to do in Catania in one day. 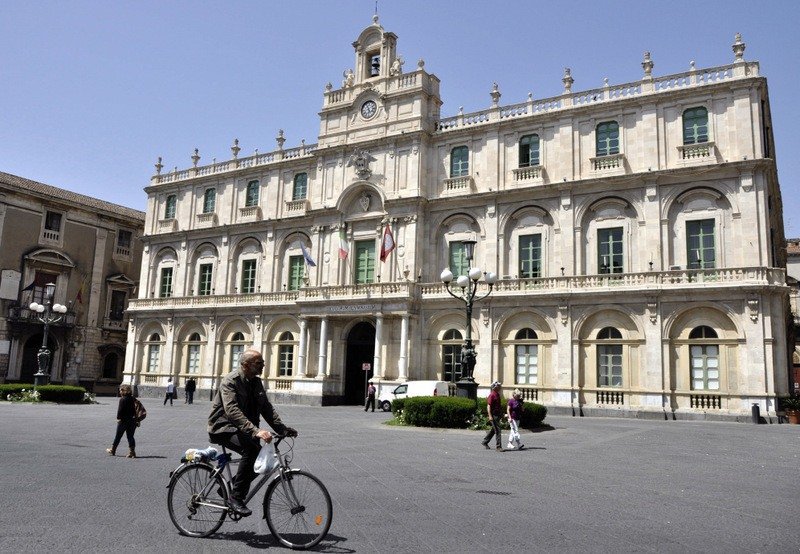 Catania’s old town centre is fairly small and ideal for walking. The avenues and the Piazza del Duomo are wide and spacious, a reaction to a volcanic eruption in 1669 where the lava flow reached the city and beyond. This was followed 24 years later by an earthquake which levelled it. Catania has literally risen from the ashes and rebuilt itself from the lava rock that once destroyed it. The wide streets are not only lovely to look at but allow for ease of escape and shelter in the event of another disaster. Architecture in Catania is Baroque with imposing concave churches and an ornate cathedral built from basalt lava and limestone. Via Umberto runs from Catania port straight through the city to Park Villa Bellini.

Catania has its fair share of quirky and the emblem of the city, an elephant, can be spotted peeking out from many an unlikely place but the most obvious is in the Piazza del Duomo. The smiling Fontana dell’Elefante, built from dark basalt in 1736, is known as Liotru and stands guard over the city as a symbol of strength to protect it from enemies, misfortune and natural disaster. The Egyptian obelisk on its back was one of two once used in the amphitheatre to mark the start and finish lines for the chariot races. 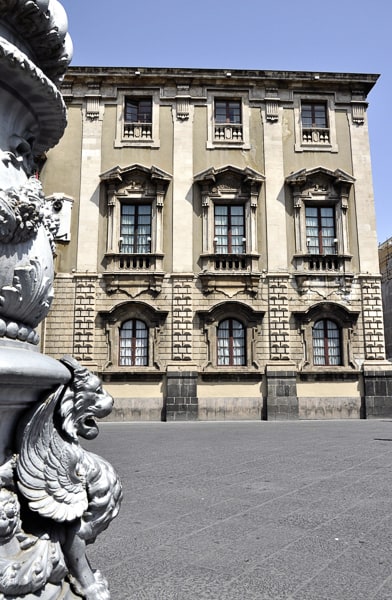 The main sight on Piazza del Duomo is the imposing Cathedral of Sant’Agata. Catania’s cathedral was built over the Roman Baths of Achilles on the place where the holy martyr Agata died in 251. You can still see the entrance to the baths inside the cathedral gates to the right. The first cathedral was built by Normans in 1090, restored after the earthquakes of 1140 and 1169 and finally completely rebuilt from scratch after the earthquake of 1693. Wander in to see the tomb of Bellini and the relics of Sant’Agata. 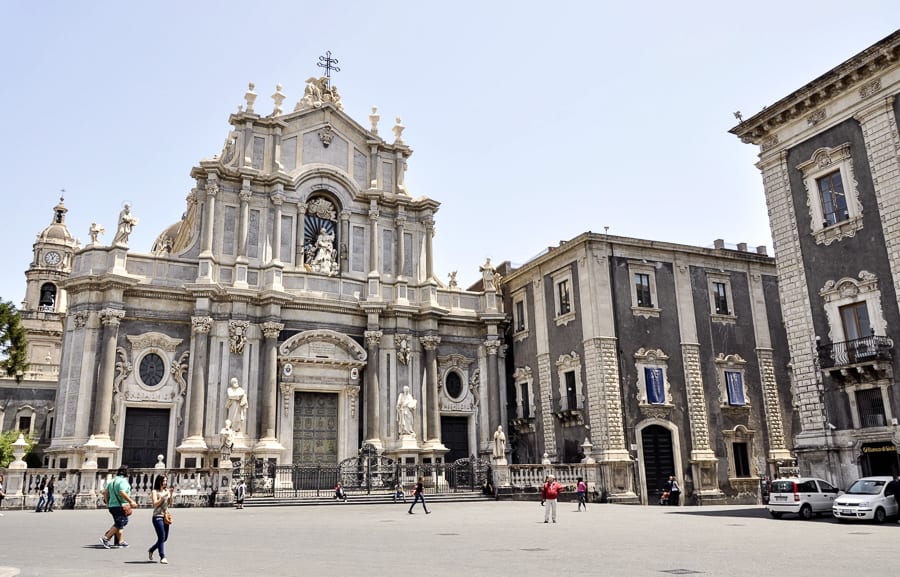 There are many concave fronted churches in Catania and I must have spotted at least a dozen but the prettiest, Basilica della Collegiata, (left) was situated on Via Etnea. It was seeing this and the Cathedral all beautifully lit up on the first evening that persuaded me to spend the next day in the city. Another favourite is The Saint Francis of Assisi Nigh the Immaculate church which backs onto the Roman theatre (right). 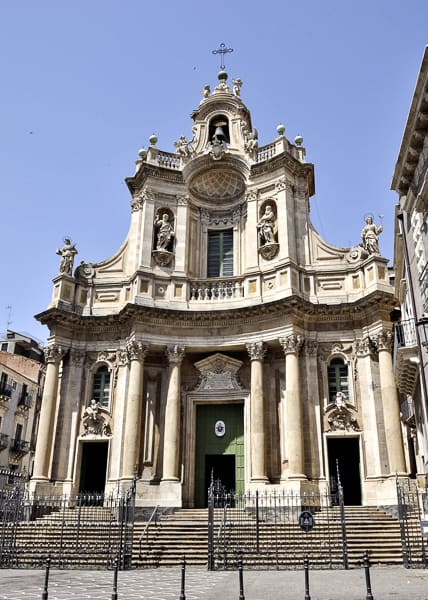 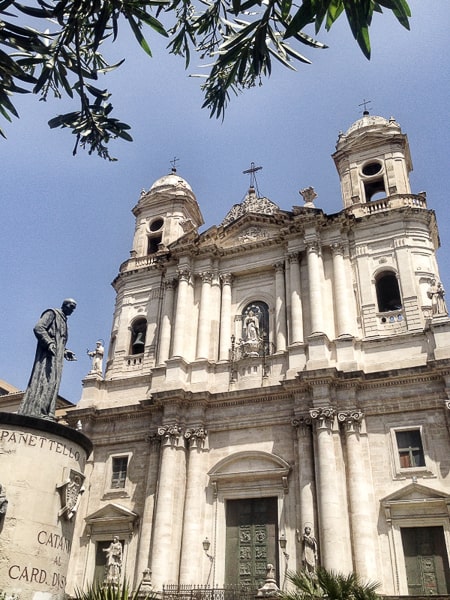 There’s an underground river running underneath Catania, you can catch a glimpse of it at the Fontana dell’Amenano by the entrance to the famous fish market, La Pescheria. Our guide told us the best place to see it is in the bar of the Agorà Youth Hostel. Here you can sit at your table in a lava tube and watch as the water flows through. Nearby are the remains of the Roman baths and the food market.

The Market in Catania

A visit to the port of Catania wouldn’t be complete without dropping by the market. Catania fish market, known as La Pescheria, is located at Piazza Duomo near the fountain at Fontana Dei 10 Canali and is one of the best things to see in Catania. Step behind the fountain and you’ll find yourself on a terrace overlooking the main arena of the fish market. There’s bartering and banter as stall-holders convince market-goers that theirs are the freshest, finest fish in the market. In the side streets leading away from La Pescheria are more stalls displaying colourful fruit and vegetables, meats, cheeses, dried fruits, nuts and other food. Catania is passionate about good, fresh food. 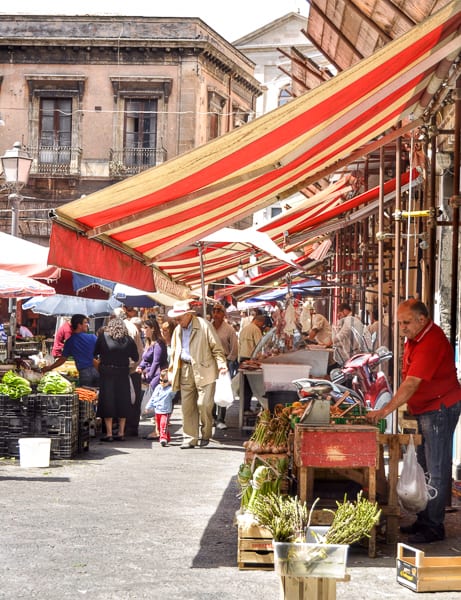 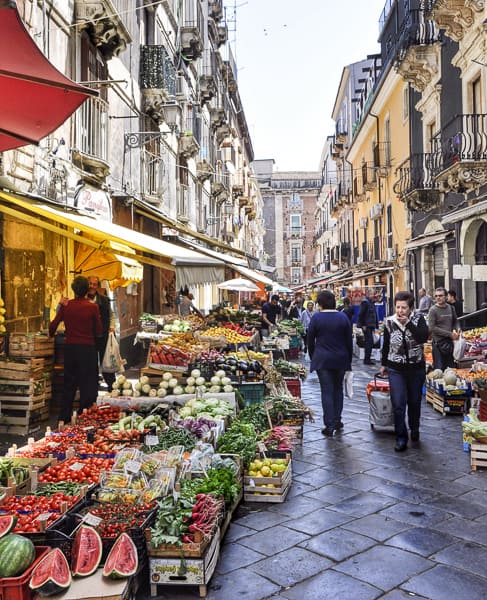 Castello Ursino was originally a coastal fortress guarding the city from a high vantage point. During the Etna eruption of 1669 the lava, after destroying much of the city, flowed around the castle moving the coastline to the east. The castle was left landlocked and removed of its strategic position. Today it houses the town museum. 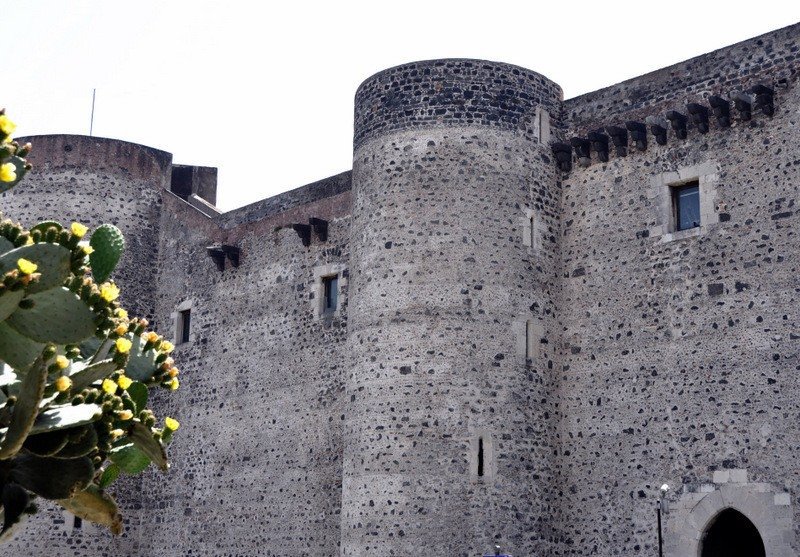 When in Catania it’d be plain rude not to sample the Cannoli. There’s a thriving cafe culture in Catania and the pastries that accompany the coffee are just out of this world. Sicily is famous for Cannoli so make sure you indulge whilst you’re there. 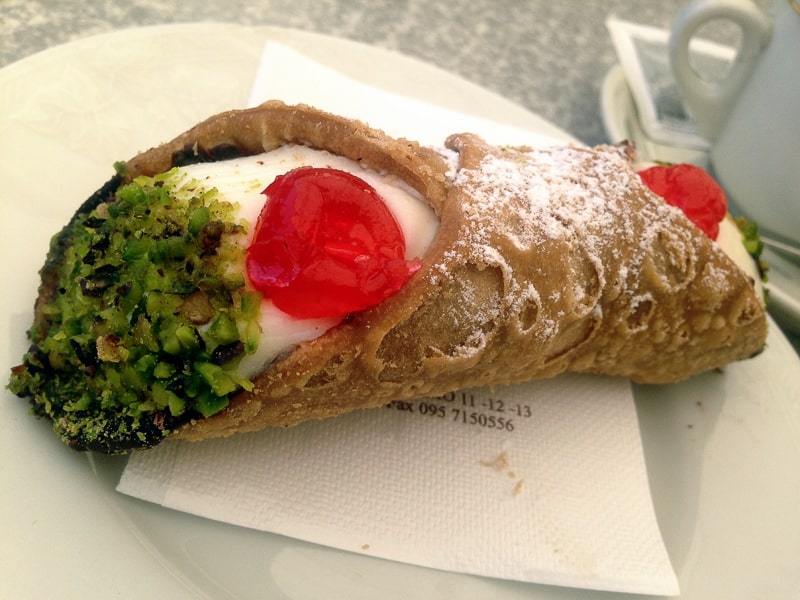 Travelbunny Tip: Make sure the cannoli are not pre-filled or they’ll not be as deliciously crisp as they should be 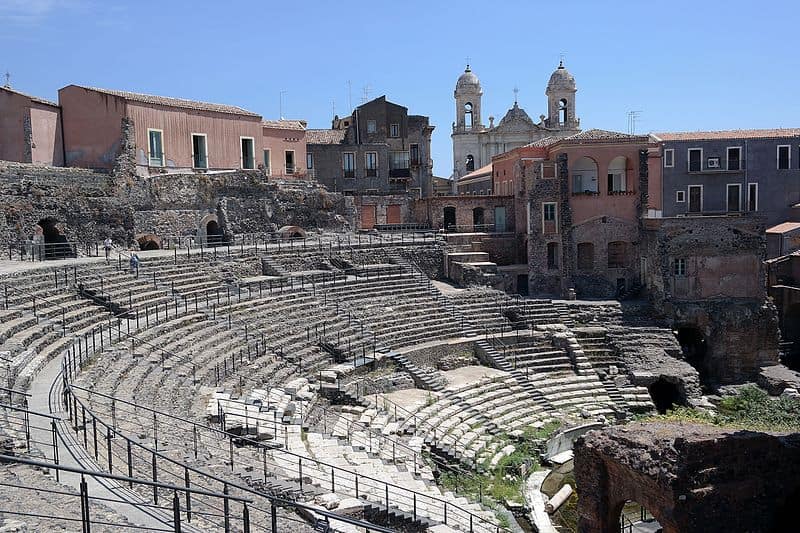 Walk west from Piazza Duomo to Via Emanuele 266 and look carefully for the entrance to the Roman theatre. There’s no view of the theatre from the street so it’s easily missed. The Greek theatre was once located on the southern slope of the former Acropolis and was rebuilt by the Romans into a Roman theatre with a connected smaller Odeon. The black lava stone structure once housed around 6000 spectators with rows of seats and steps overlooking a small stage. The remains of another amphitheatre are on Via Etnea. It once sat 16,000 people although nowadays there’s little left above ground. The underground tunnels still exist and it’s sometimes open to visitors.

We stayed at the contemporary 4-star Una Palace Hotel, Catania, housed in an historic building. The hotel is located in the heart of the city within easy walking distance of the best Catania sightseeing. Rooms had a Baroque style and were comfortable with elegant décor and air conditioning. The rooftop garden has fabulous panoramic views of Mount Etna and the city’s rooftops. This is also the location for one of Catania’s best restaurants and also where we had breakfast (supplement). It’s a lovely spot for evening drinks which came with an array of complimentary traditional Sicilian nibbles including arancini. The railway station is 2.5km and the Fontanarossa Airport just 6km from the hotel. 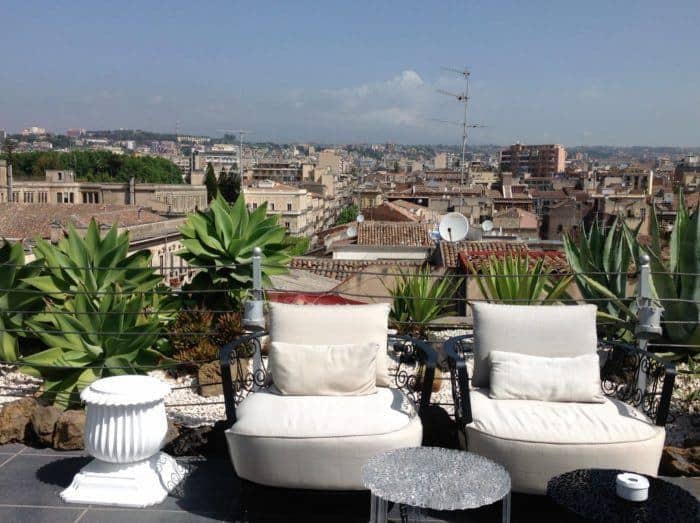 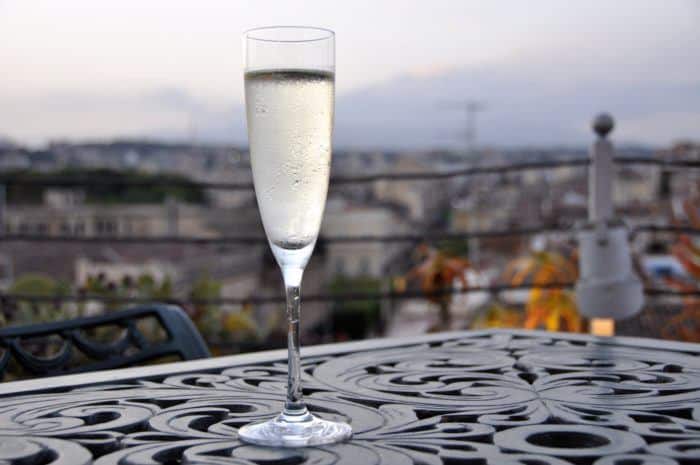 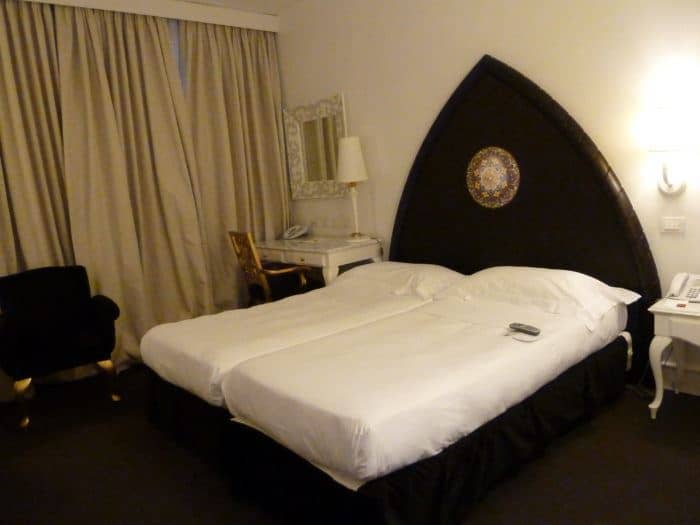 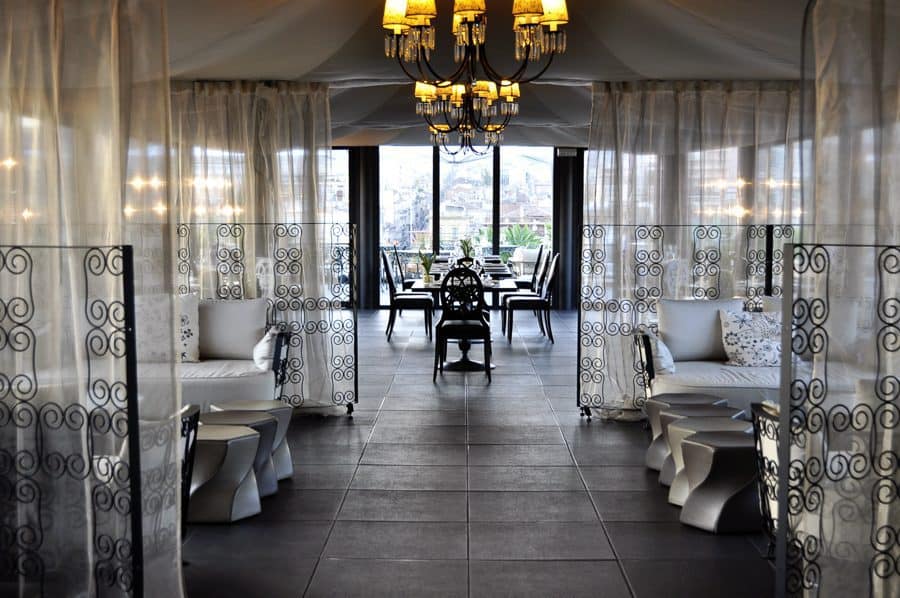 Places to visit near Catania

Take a Trip to Etna from Catania

Mount Etna, Europe’s largest volcano, is a brooding presence and can be seen from all over the city. It’s usually enveloped in cloud but to take a look behind the vapour take a Mount Etna tour from Catania. After a hotel pick up you’ll drive up in an air-conditioned 4WD. Visit craters and lava flows and explore a lava tube with a final stop at Valle del Bove, the most important valley on the east slope of Etna with outstanding views.

How to get to Mount Etna from Catania

If you don’t want to take a tour you can take public bus, cable car and a 2 km hike. Click here for more in depth information but it’s quite a lot of hassle and you don’t actually save much more than if you’re paying for a tour.

La Playa beach has 18 km of golden sand and is a locals’ favourite beach.  Another plus of La Playa are the stunning views of Mount Etna.

This is just a taste of what to see in the city. I hope my guide helps you get the best out of your time in Catania. We also visited Via Cuciferi with its arch bridging the street below and the town’s park, Villa Bellini. We stopped by some of Catania’s cafes and sampled some delicious Sicilian pastries and local food. After buying our ingredients in the food market we enjoyed a cafe culture in Eleanora Consoli’s kitchen where we learned how to make the Catania’s signature dish, Pasta alla Norma.

Have you visited anywhere that completely took you by surprise?  Where was it and why did it grab you?

I visited Catania as a guest of Celebrity Cruises to try out one of their shore excursions and paid for an extra night myself so that I could explore the city. As always, all views and opinions are my own and I retain total editorial control.

This post contains affiliate links. By using affiliate links, we earn a small commission when you book a room, tour or buy a product at no extra cost to you. 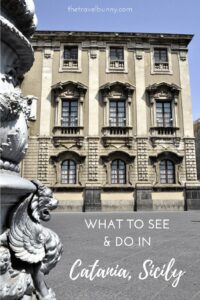 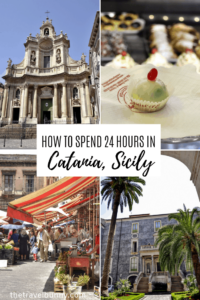