Check out Brighton’s Burning of the Clocks, a unique winter solstice festival which takes place annually on 21st December. 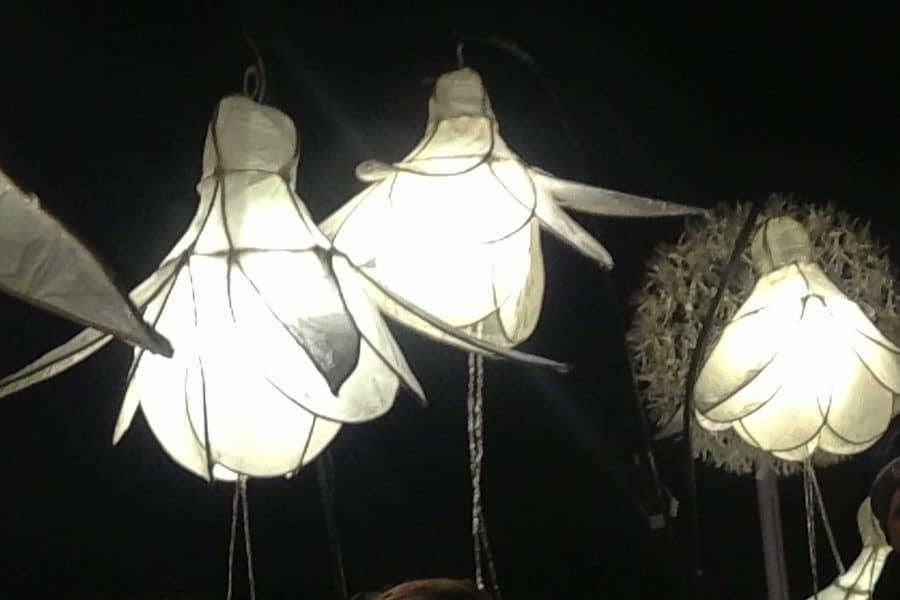 The current Covid-19 restrictions have made it impossible for the annual parade and fire show for Burning The Clocks to go ahead, but you still find some seasonal lantern cheer and a Brighton lantern trail for 2020.

This year sees a different approach with several lanterns displayed in shop windows which creates a more social distanced casual trail for all to enjoy.

Twelve of Brighton’s independent shop windows will display lanterns celebrating the twleve key aspects that make up the much loved Burning the Clocks event like fireworks, samba and dancing. The lanterns will form a trail to follow through Brighton’s centre, close to the usual path of the parade.

A simple lantern pack is available so that people can make and hang a lantern in their window to mark the winter solstice on 21st December and show their support. All proceeds will go to support the future of BTC in these uncertain times. This year’s alternative Burning the Clocks winter trail has been made possible thanks to the Government’s Culture Recovery Fund, which was confirmed last week.

The winter solstice on 21st December is the date that Brighton city centre lights up the darkest, shortest day of the year with a unique festival. Burning the clocks, Brighton is a magical procession which wends its way through some of Brighton’s oldest streets and lanes.

In this community event people hold aloft hand-made willow lanterns in a procession that heads down to the sea. The gathering ends on the seafront at Marine Parade for a spectacular finale of the burning the clocks on the beach. Clocks and lanterns and set upon a blazing beach bonfire followed by a burning the clocks firework display.

Founded in 1994, the winter solstice is a celebration of the turning of the year. The unique community event on the shortest day of the year has become a tradition as part of the festive season. It’s also ‘an antidote to the excesses of a commercial Christmas’. The winter solstice offers an alternative to Christmas and centres around the theme of ‘time’ starting with the Brighton lantern parade.

The Burning of the Clocks starts with a procession of glowing lanterns made from willow canes, traditionally called withies, and white tissue paper. As the lanterns are created their makers build into them their time, wishes, hopes and fears. Every lantern is precious and unique to its owner. 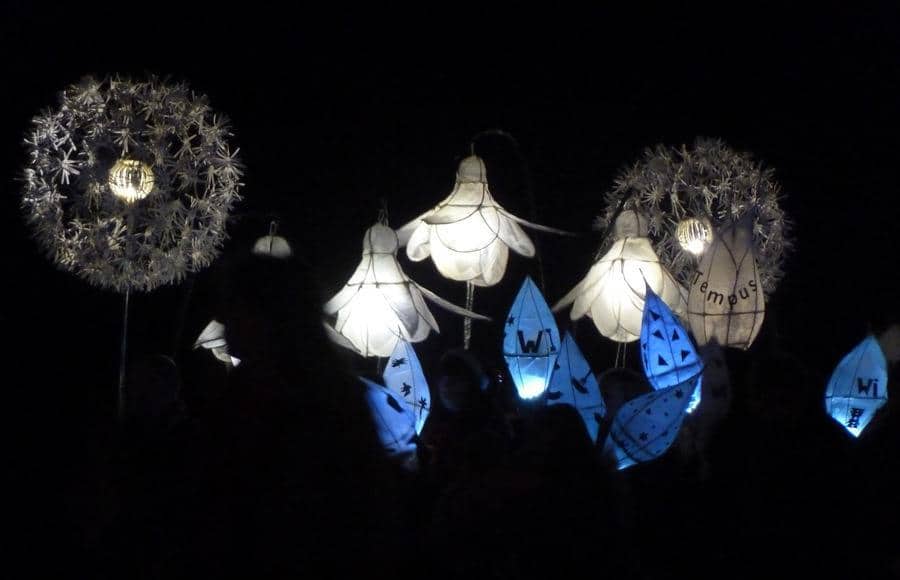 The burning the clocks lanterns have gradually become more elaborate. From the simple lantern kits supplied by Same Sky they’ve evolved into dragons, mythical creatures, aliens and some that could actually be anything but we’re not sure what. Many of the costumes and lanterns include clock faces to represent the passing of time. Tick tock. 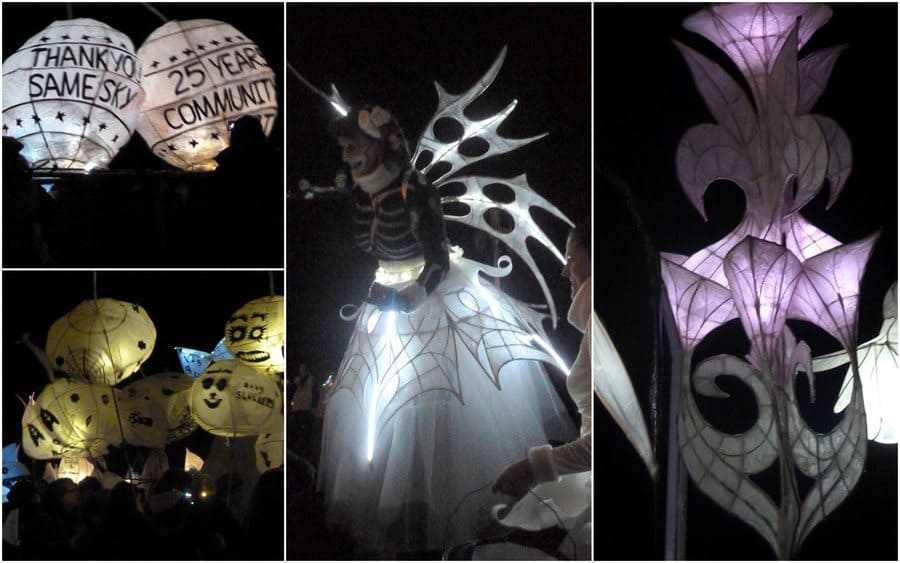 Huge Dandelion lanterns, the size of space-hoppers, bob along high above the heads of the crowd. As children we called them dandelion clocks and would blow away the seed heads; one o’clock, two o’clock…  Looking closely the flowers are made from delicate wire and paper and must have taken hours to create. The dancing fuchsia lanterns are beautiful. 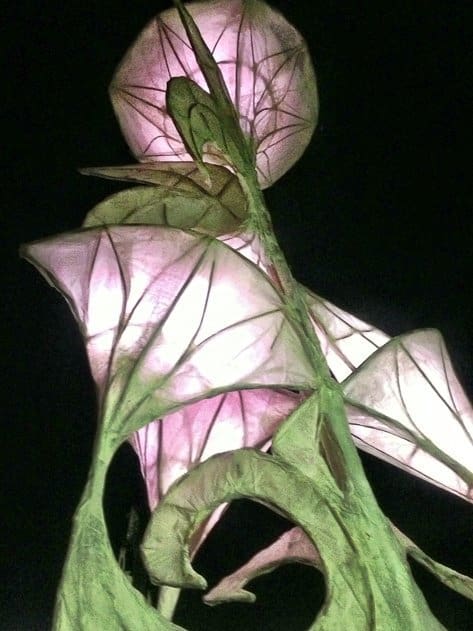 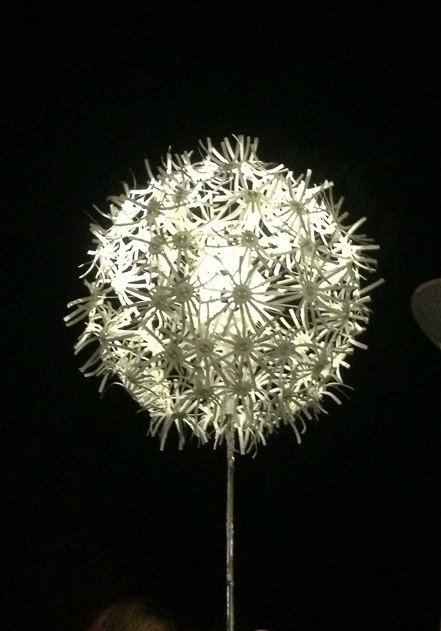 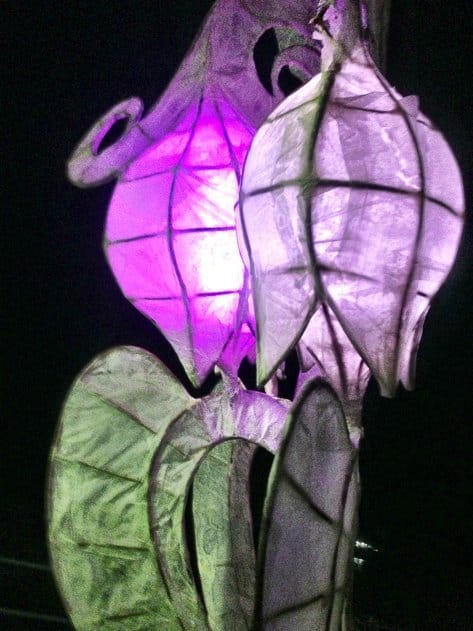 The lanterns used to be lit with candles, however, health and safety stepped in a few years ago and now no naked flames can be used. This hasn’t affected the beauty of the procession. It’s all quite magical and ethereal. The music is kind of David Sylvian meets Swiss clock-maker and adds to the quirky, ticky-tocky feel of the occasion. 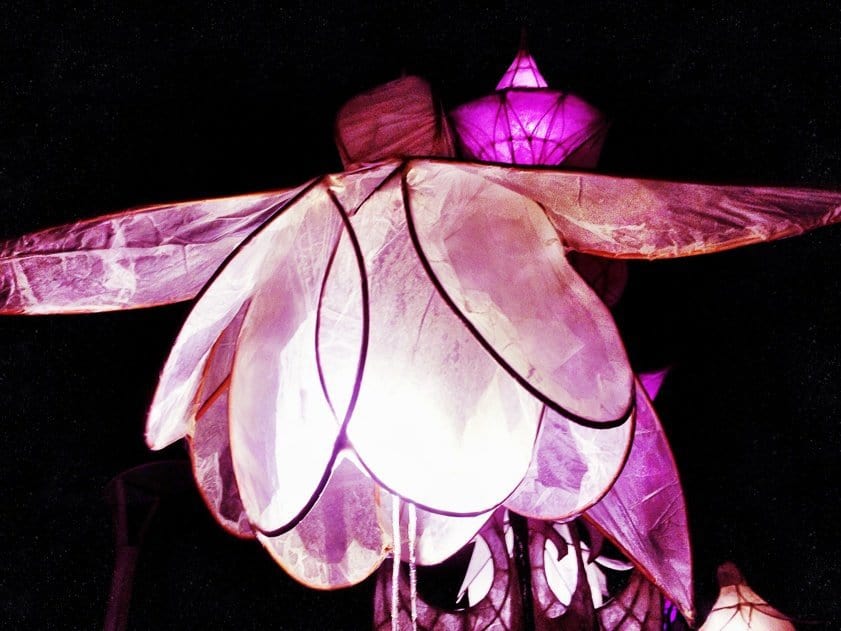 This is a family event with many children clutching their home-made lanterns and joining in the fun.

Burning of the Clocks

The procession makes its way through Brighton city centre to the seafront where the festivities culminate on Brighton’s famous pebble beach. The finale is a spectacular firework display as the lanterns and giant clock are given up to be burnt on a blazing bonfire. A token to the end of the year. The flames light up the faces of the crowd and the smoky night sky. 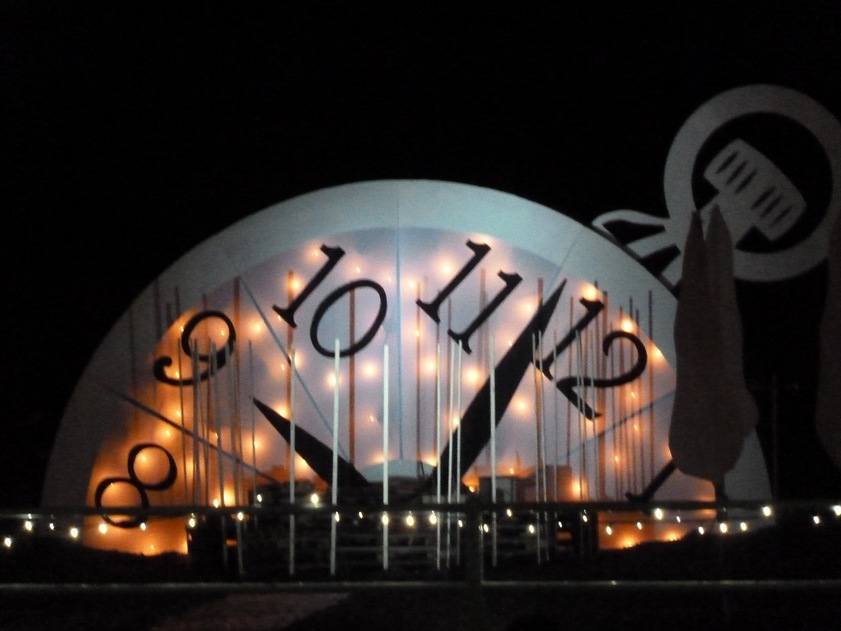 Burning of the Clocks is created by Same Sky a Brighton Community Arts charity group. They carry out free lantern-making workshops for local community groups. Some are homeless young people, single fathers, and young carers who are encouraged to make something they can be proud of. 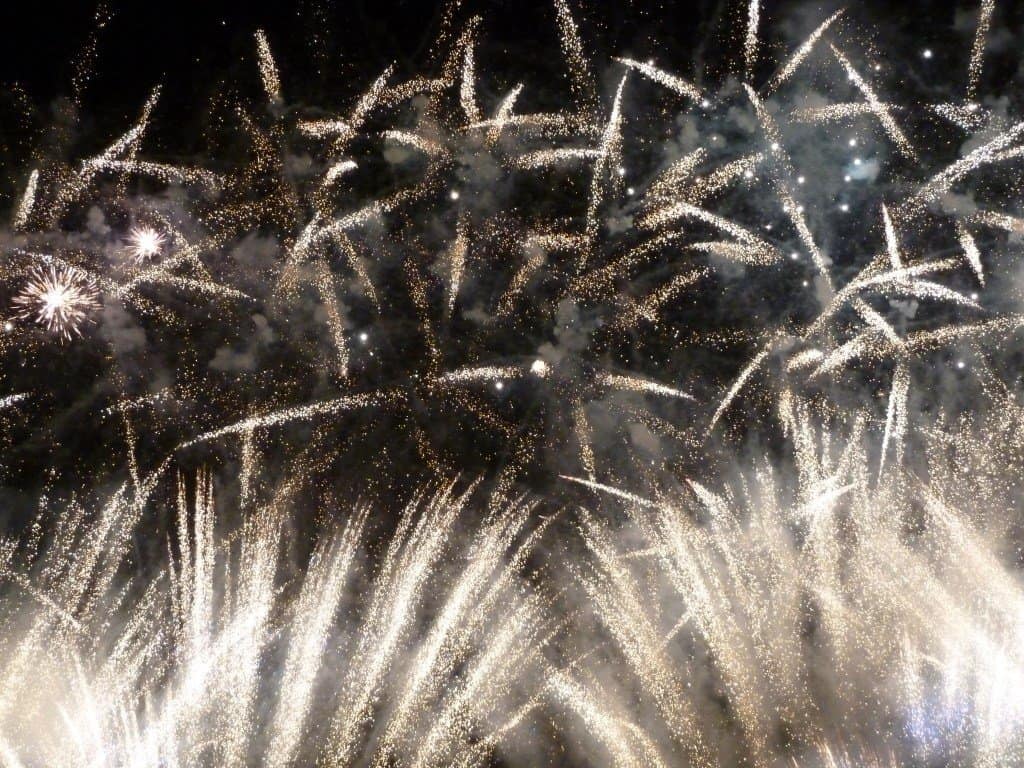 Their events take elements of the past, the seasons and celebrate place and home. The giving and sharing of thoughts and wishes are put into a format that can be enjoyed regardless of faith or creed. The event turns the spotlight away from the more commercial side of Christmas and lights up the darkest of winter nights. Most importantly the event brings people together with their local community through the shared experience of art.

Burning of the Clocks is a wonderful, magical way to while away the longest night and to light up the depths of winter.

Burning the Clocks Route and Times

The parade leaves from New Road at 6.30pm and arrives at Madeira Drive at approximately 7.15pm, when lanterns are passed onto the bonfire and the fireshow begins. The event finishes at around 8pm.

The parade makes its way through North Street, Ship Street, East Street, onto the seafront and along to Madeira Drive for the finale. Please do not wait in New Road to watch the parade as this is the assembly zone for 1,500 participants and there is no space for audience.

The fireshow will take place on the beach with viewing from Madeira Drive and the Upper Terrace on Marine Parade. The finale will contain loud music and pyrotechnics.

The best place to watch the parade is Madeira Drive and the Upper Terrace of Marine Parade.

For more information on how to visit the Burning of the Clocks check out the Same Sky Website.

I can't believe all that work goes up in smoke at the end, Suze! I'd have pinched a fuscia and smuggled it home. Spectacular, the whole thing. Peaceful Christmas with Amy away? I just know 2013 will be kind to you!

Glad to say the fuscia's weren't burnt at the end - they must have taken hours to make. Very quiet this year but with my son and Mum and Dad tomorrow. You?

Beautiful pictures! Happy holidays to you!

Looks fabulous, we did the hogmanay torchlight parade in edinburgh a few years ago, everyone got a flaming torch and a river of fire wound from the Royal Mile down to Princes street and then up Carlton Hill. Bit of a worry when you have wee kids with flaming brands and hair like mine!

You might have to get a hat if you go this year! If you do be sure to show us some pics :)

This looks like a brilliant event and you have captured great images of it. I like the idea of it being an antidote to the commercial excess of Christmas.

It was a lovely way to spend a winter's evening :) Wishing you a very Happy Christmas and New Year.

What a gorgeous event! I hope you have a great Christmas and New Year.

It was all very pretty - Have a lovely Christmas and New Year too :)